This Car Seat Check was first published in September 2010 on MotherProof.com.

With its new look, the 2011 Jeep Grand Cherokee has garnered lots of attention. This perennial family favorite has shed its boxy ways in favor of a sleek design. To remain popular, this redesigned SUV needs to comfortably hold the kids and their child-safety seats in the backseat. While our test found that the backseat can easily accommodate three car seats, we did run into a few problems.

For the Car Seat Check, we use a rear-facing infant-safety seat, a convertible child-safety seat and a high-back booster seat, all made by Graco.

Latch system: The Grand Cherokee has two sets of lower Latch anchors in the outboard seats. Unlike many other anchors, these aren’t buried in the seat cushions, but they are too close together, which makes it difficult to install a car seat because the seat covers the anchors.

I had problems with the tether anchors, too. There are three anchors, positioned midway down the seatbacks. In the Grand Cherokee, the cargo-floor flaps, which bridge the floor gap when the seats are folded flat, cover the tether anchors. To access them, you have to pull the flaps back, but the cargo area’s wheel wells keep them from moving more than a few inches. The back of the flaps have a rough plastic coating that scrapes hands when installing the tether connector.

Booster seat: The reclining rear seats help ensure a good fit for the booster seat. However, the seat belt buckles sit way too low in the bottom seat cushions, which would make it difficult for kids to easily grasp and buckle by themselves.

Convertible child-safety seat: Thanks to ample legroom in the backseat, a rear-facing convertible fits without moving the front passenger seat forward. The forward-facing convertible also fits easily in the Grand Cherokee. I did run into a problem with the head restraints, though. They’re in a fixed position, which doesn’t interfere with car-seat fit, but there’s barely enough room to run the top tether strap under the head restraint.

Rear-facing infant-safety seat: This fit well, with enough room for the front passenger to move the seat back a few inches for extra legroom.

Do three car seats fit? Yes. There’s enough space between the car seats that the child sitting in the booster seat can easily get to the seat buckle — if only it weren’t so buried. 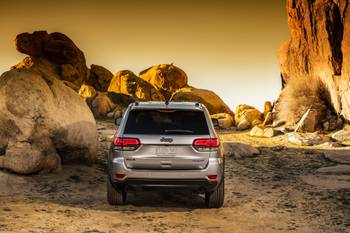 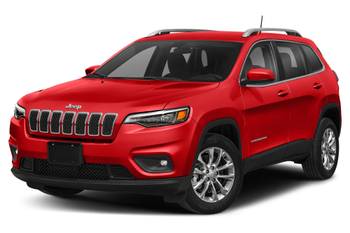