CARS.COM — With the Chevrolet SS meeting its end, that leaves the Dodge Charger and the Chrysler 300 to hold the big, rear-wheel-drive sedan mantle all by themselves (luxury cars excluded). For 2017, the Charger revives an old name that bumps up the performance and style quotient.

If the name Daytona sounds familiar, and not just because of the race, it’s because it is an homage to one of the most iconic vehicles that Dodge has ever produced, best known for its massive 23-inch-high wing. Fun fact: It was also the first vehicle to break 200 mph in NASCAR history, in 1970.

The latest version of the Charger Daytona won’t go quite that fast, but it’s got a ton of power and performance on tap in both regular and 392 trim levels. The Charger Daytona is offered in two variants, one building off the R/T trim and its 5.7-liter Hemi V-8, the other the 392 that comes with a larger 6.4-liter V-8. My test model was a Daytona 392 with the larger engine and a few additional performance goodies.

Both Daytona trims feature a Bilstein high-performance suspension, but the Daytona 392 gets further upgrades that bolster its performance credentials. Models with the larger engine have a different rear axle ratio (3.09 versus 2.62 in the Daytona models), a 230-millimeter rear axle with a limited-slip differential, directed cold-air induction system, six-piston front and four-piston rear Brembo brake package borrowed from the Hellcat, and Pirelli P-Zero all-season tires.

The most important piece of the puzzle, however, is still that engine, a 485-horsepower, 6.4-liter Hemi V-8 that makes 475 pounds-feet of torque. It’s mated to an eight-speed automatic transmission and rear-wheel drive. The Daytona 392 also gets wider 20-inch wheels than the R/T version, and our test vehicle added pretty aggressive summer tires to help put all of that power to the ground. Dodge quotes a zero-to-60-mph time in the mid-4-second range and a quarter-mile time in the low 12-second range, impressive for a sedan that’s got five seats and a big trunk.

Nothing about the Charger Daytona really holds back, and that’s why I like it — it’s an unrestrained car, and it starts with the noise. The exhaust is electronically controlled, but there’s no way to turn it down to a quiet setting, and when you start the Daytona, it comes to life with a guttural roar that I love (but the neighbors might not). Rev the engine and you get a V-8 soundtrack to match. There are pops and fizzles on downshifts, and when I found a tunnel, the windows came down instantly. It’s fantastic. 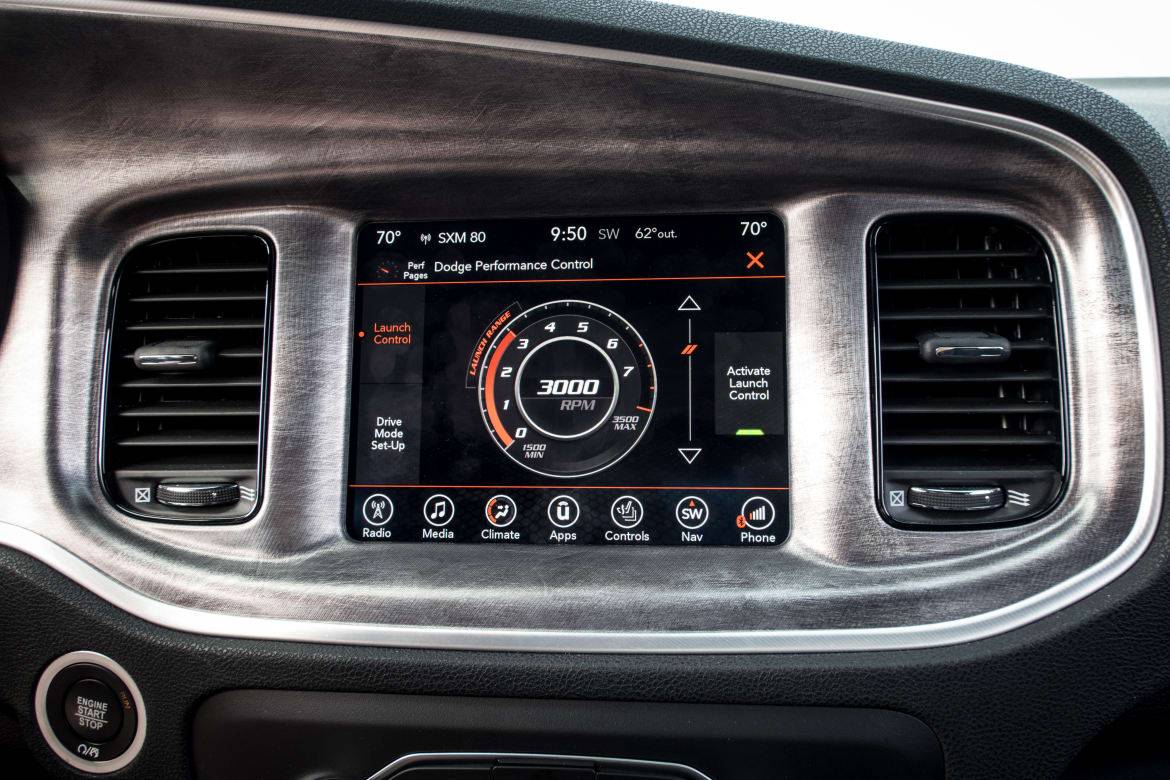 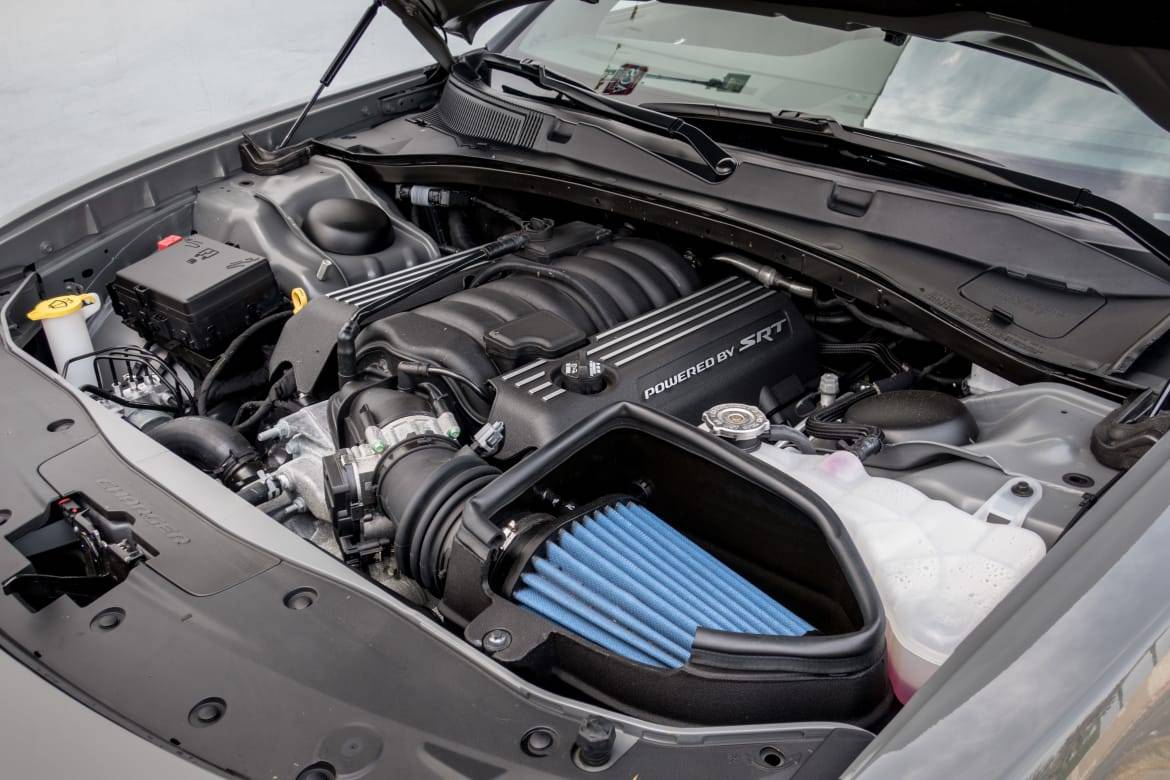 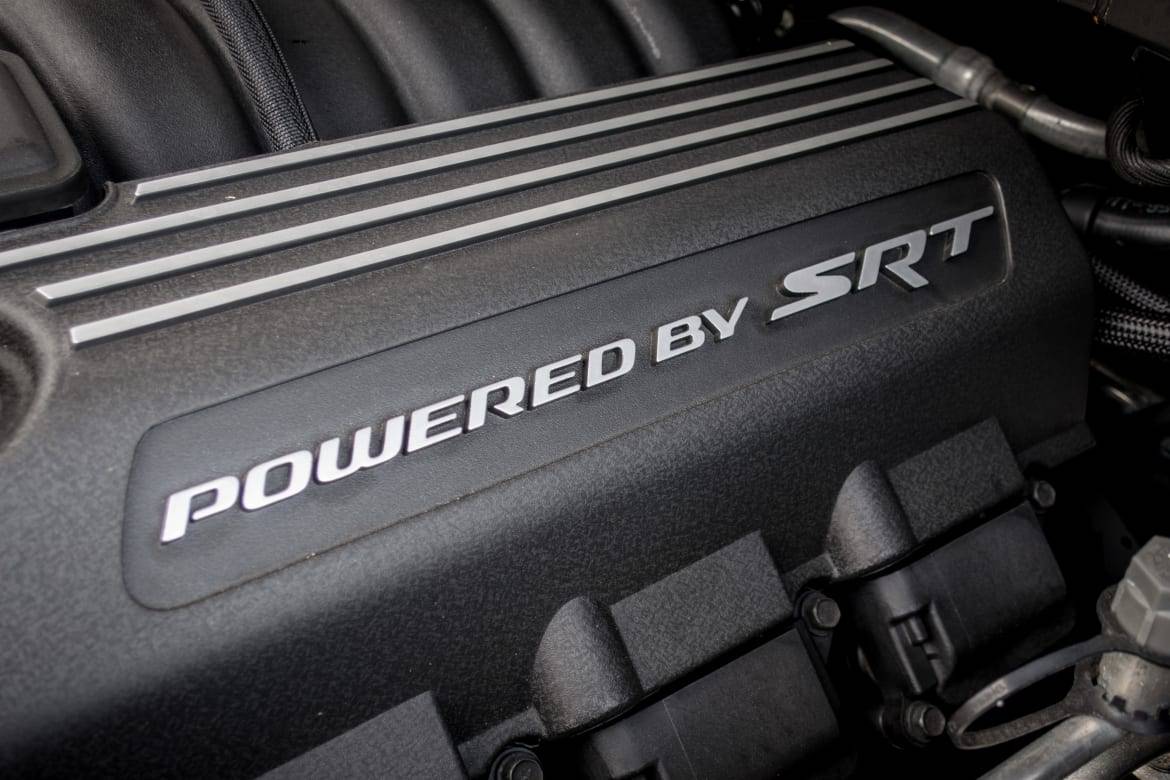 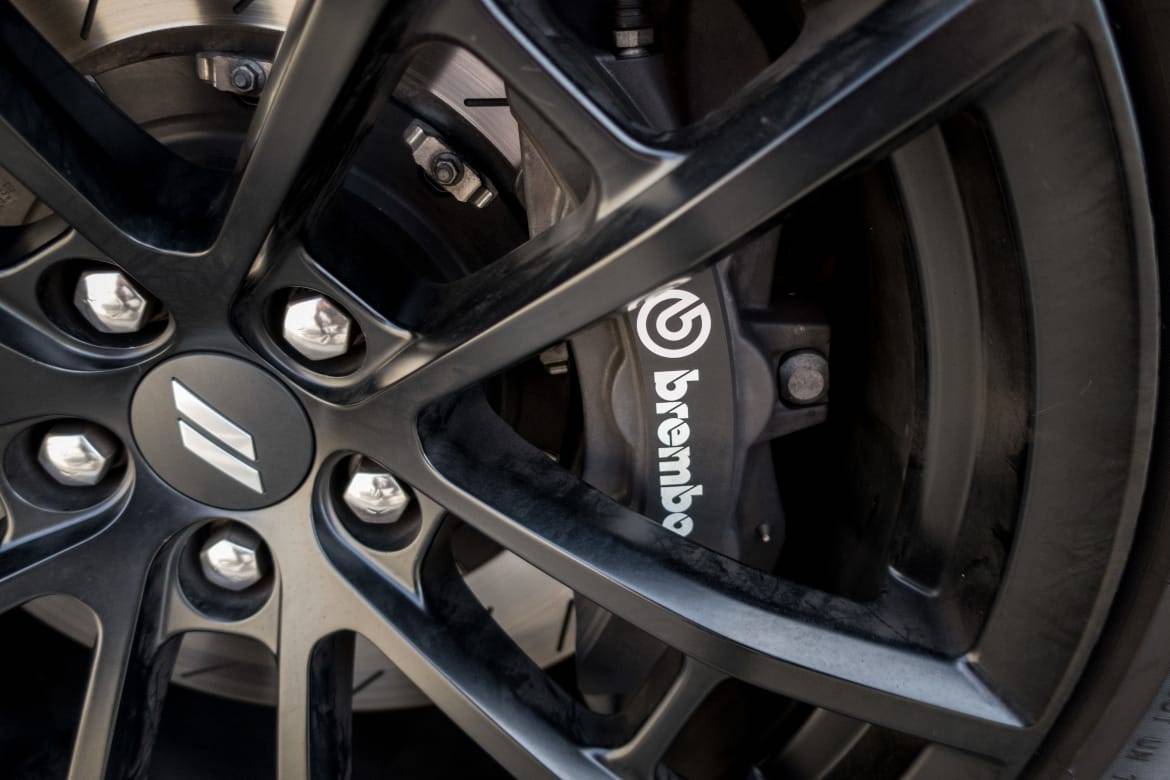 1/4
2017 Dodge Charger Daytona | Cars.com photo by Brian Wong
Don’t miss out on the latest news, reviews and videos from our in-house experts. Get updates in your inbox.

Performance matches the soundtrack; this thing is seriously quick for a sedan. The summer tires help maintain control when accelerating and also when cornering — I actually find the Charger to be a bit easier to control than the Challenger. And since it comes with the Super Track Pak, that means the Daytona adds launch control and easily customizable performance settings through the center touchscreen.

Even with its performance credentials, where the Charger really excels is as a long-distance touring car. The upgraded Bilstein suspension is taut enough to have fun yet somehow remains comfortable even over rough roads. And all of that power makes merging and passing big rigs effortless; the only drawback is the fuel economy, which isn’t great due to that big V-8: 15/25/18 mpg city/highway/combined on premium gas. But it has a big tank (18.5 gallons), so fill-ups aren’t all that frequent. I had to take a long, 700-mile drive in the time I had the Charger, and I thought it was fantastic for long highway stretches. 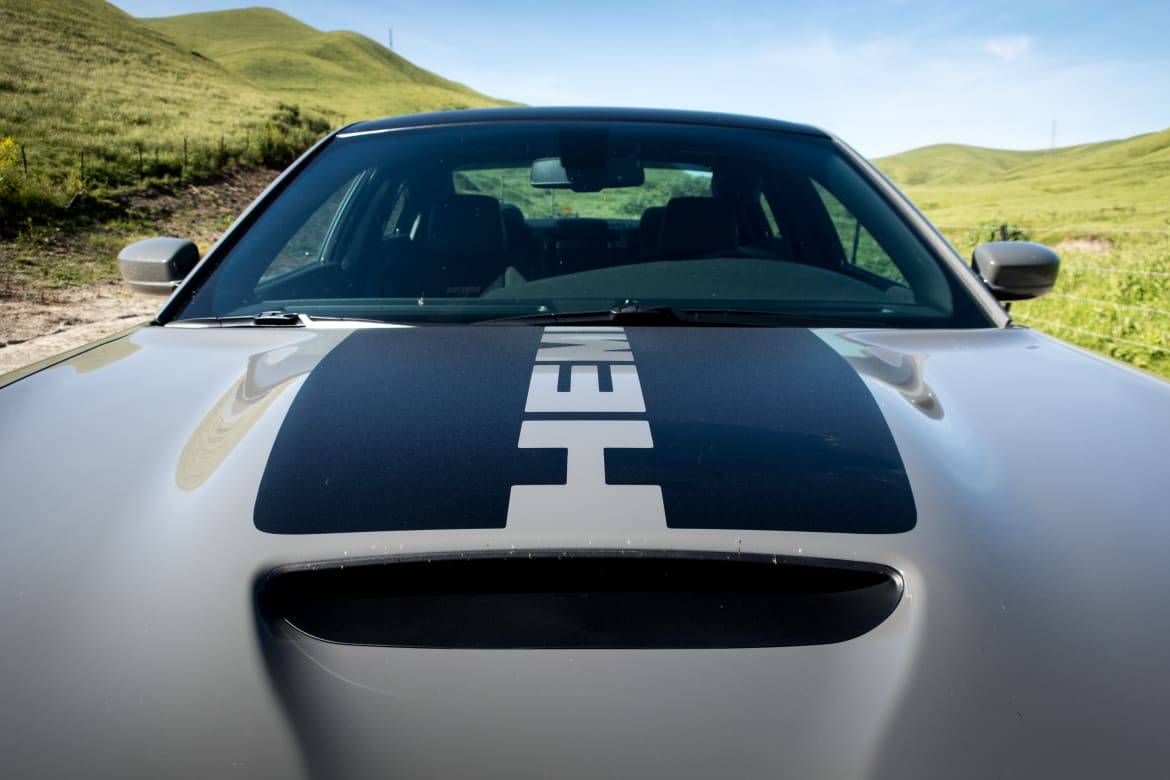 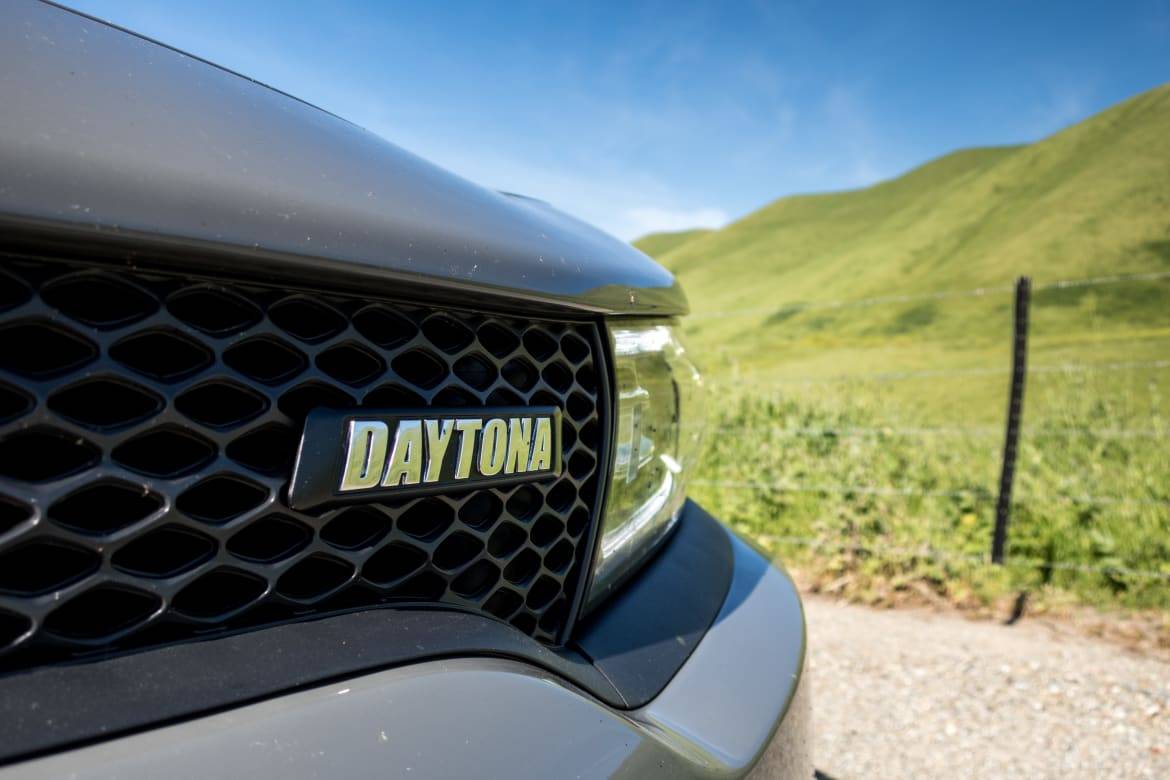 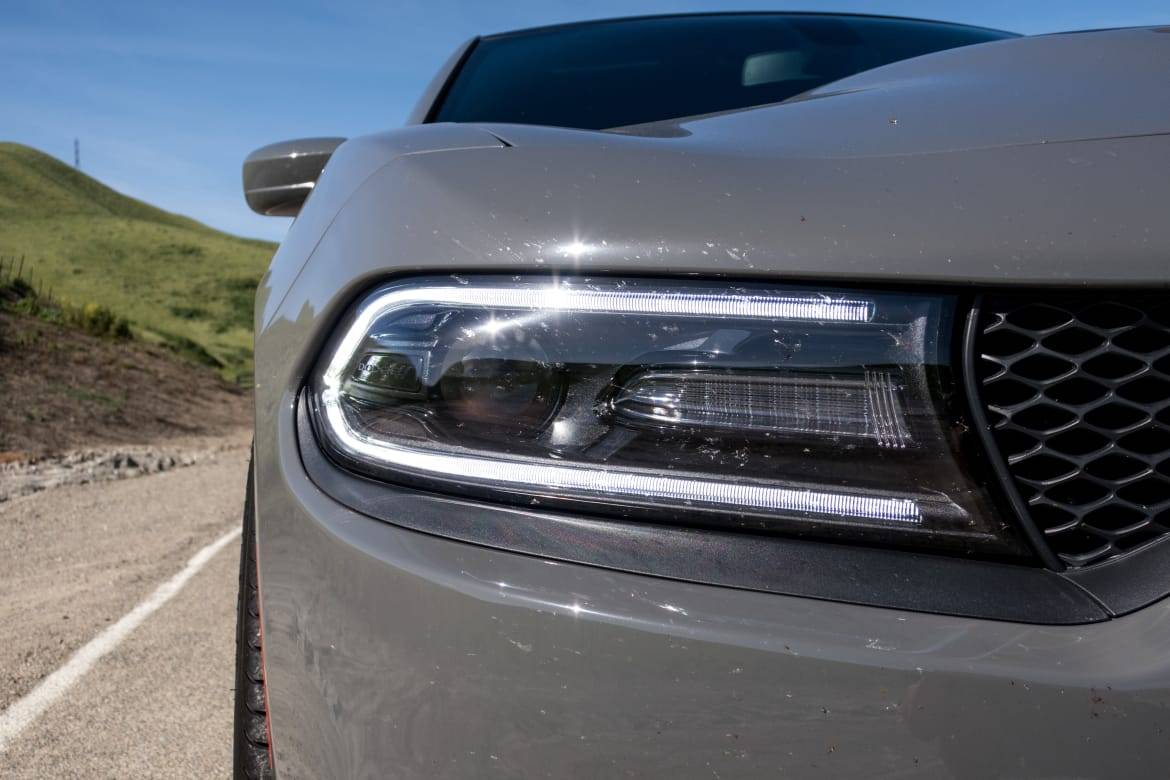 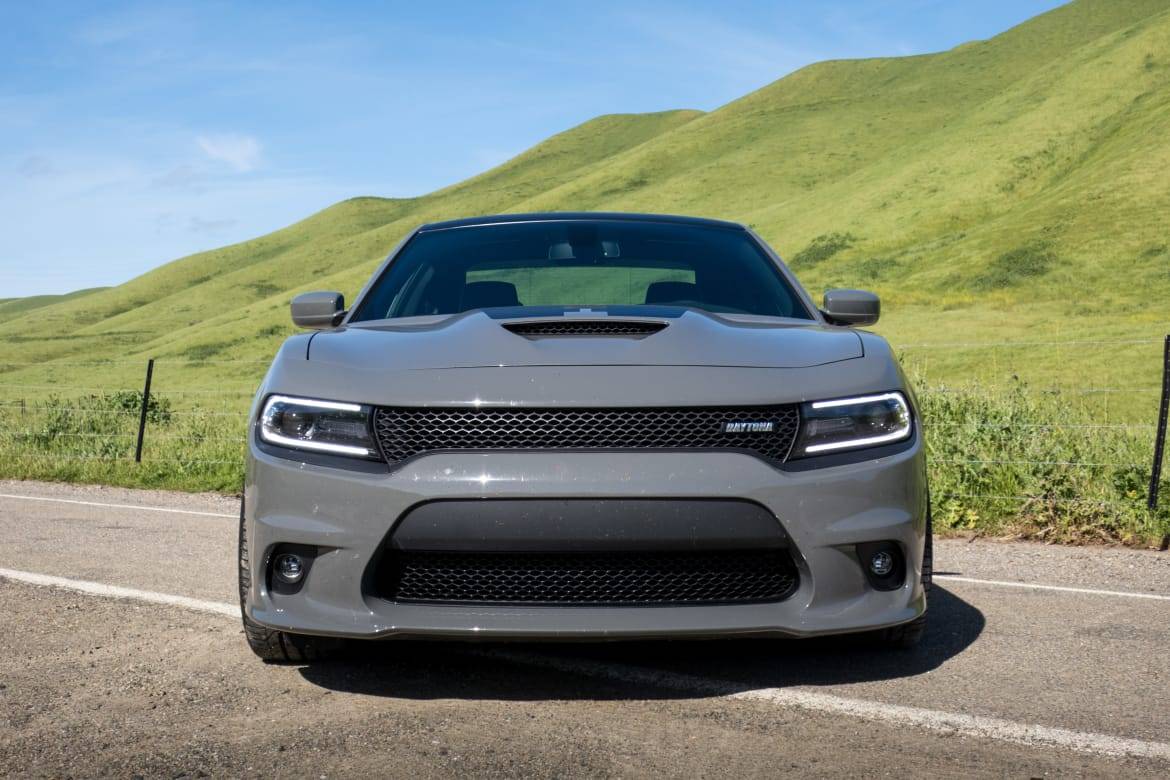 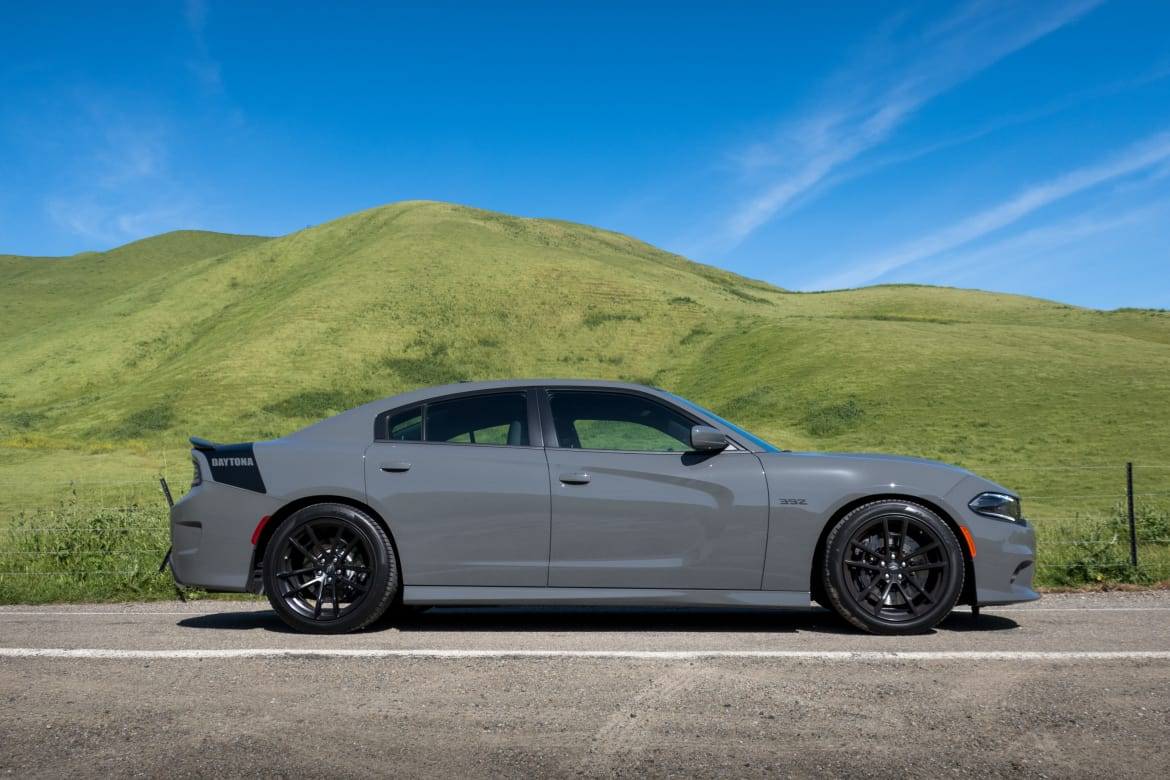 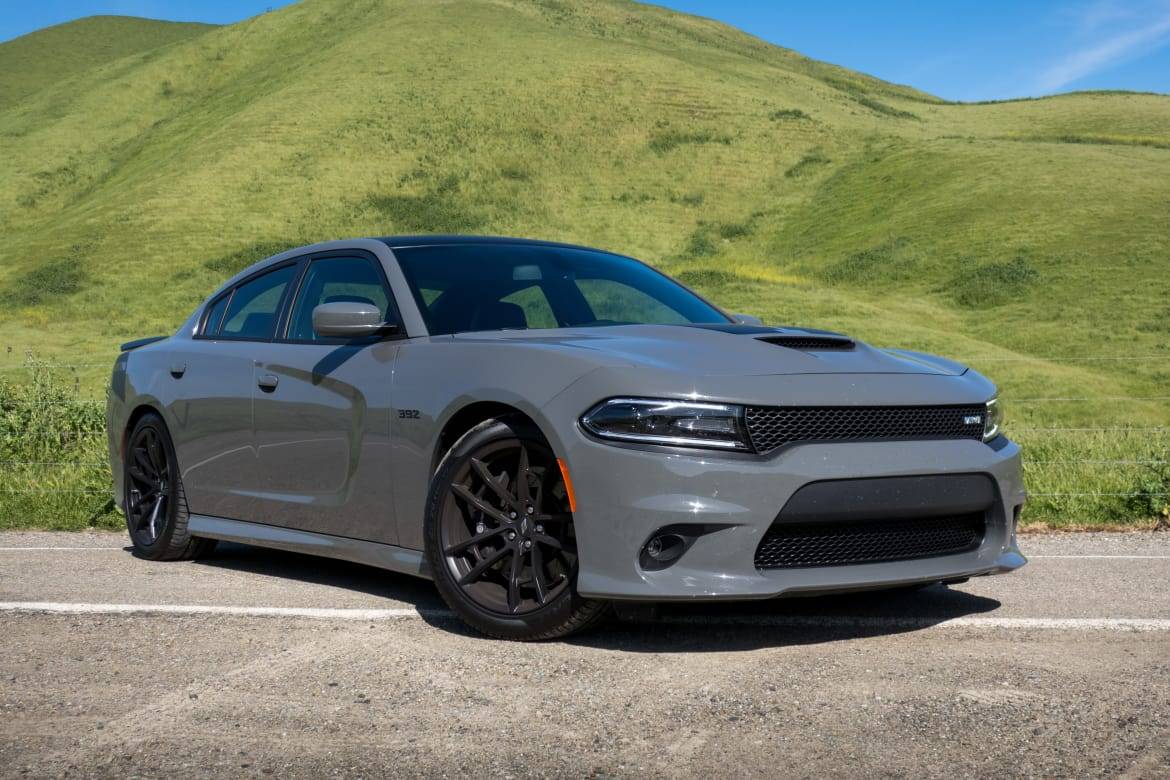 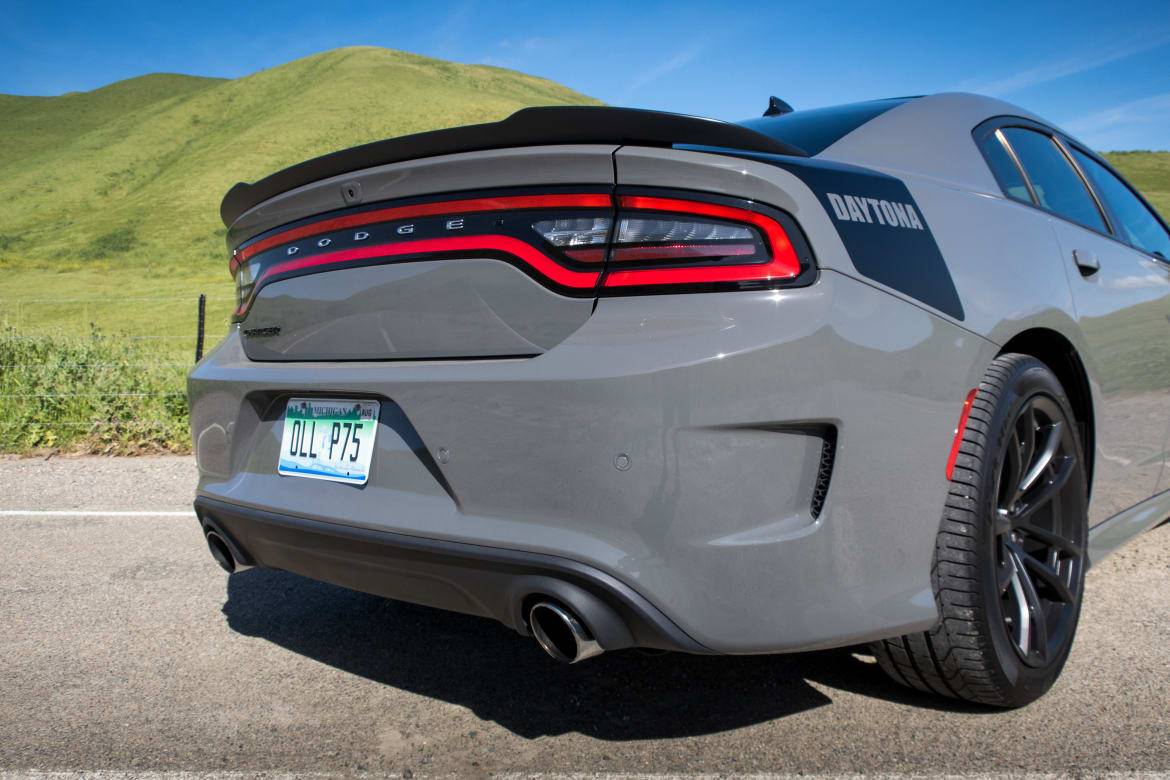 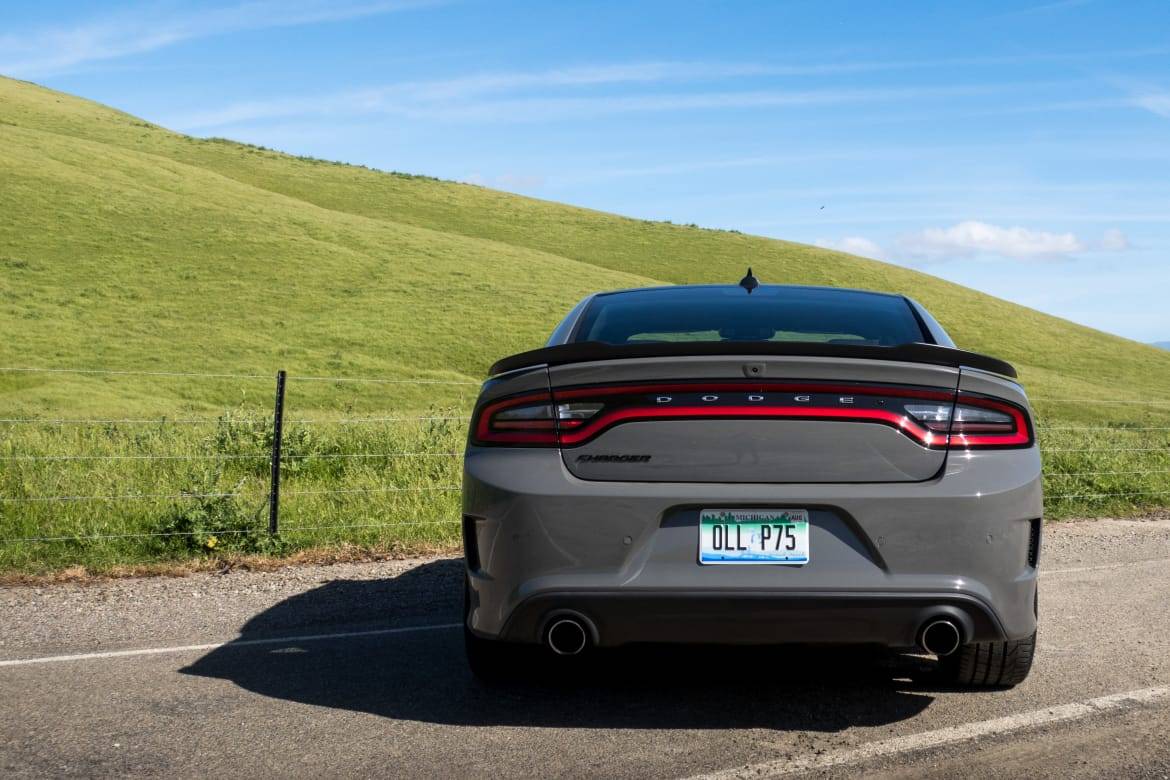 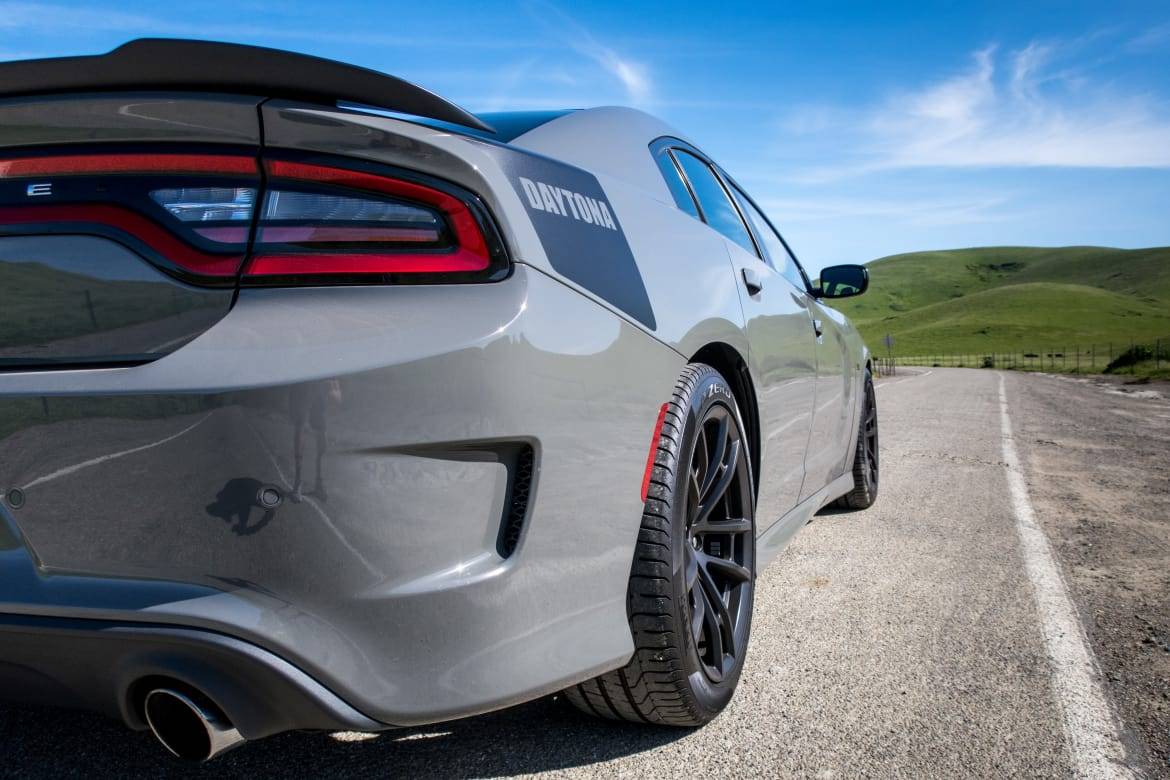 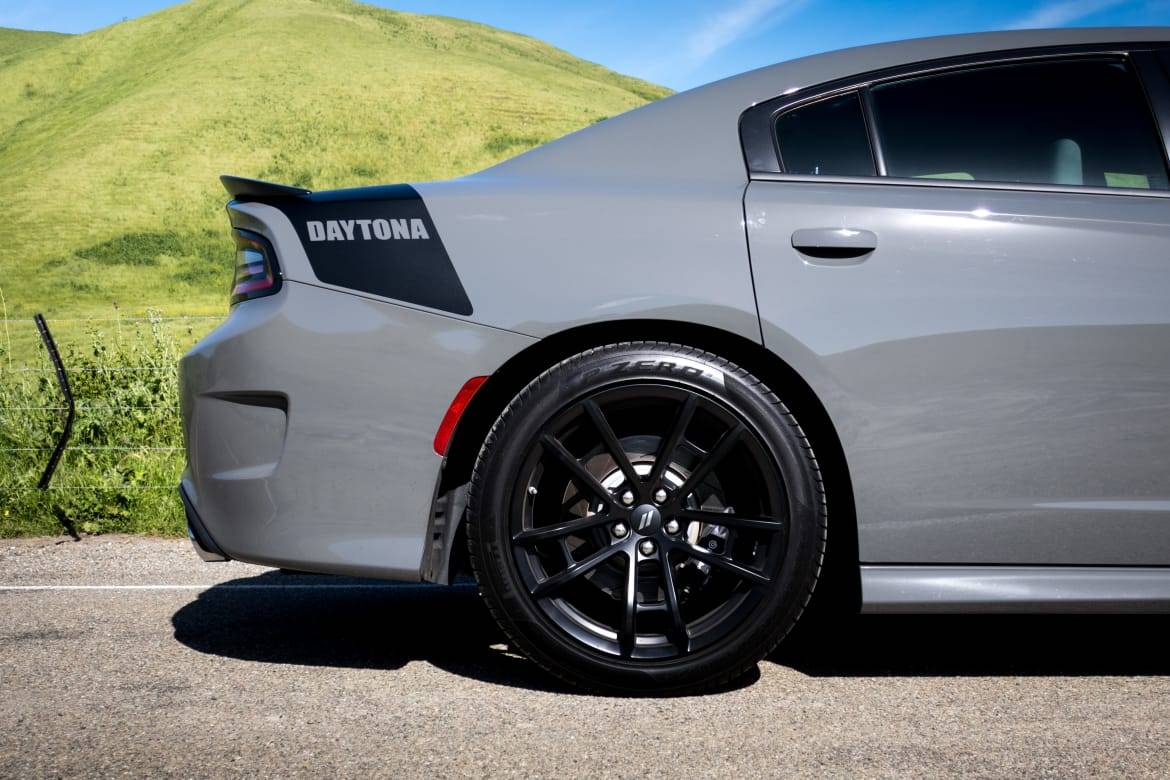 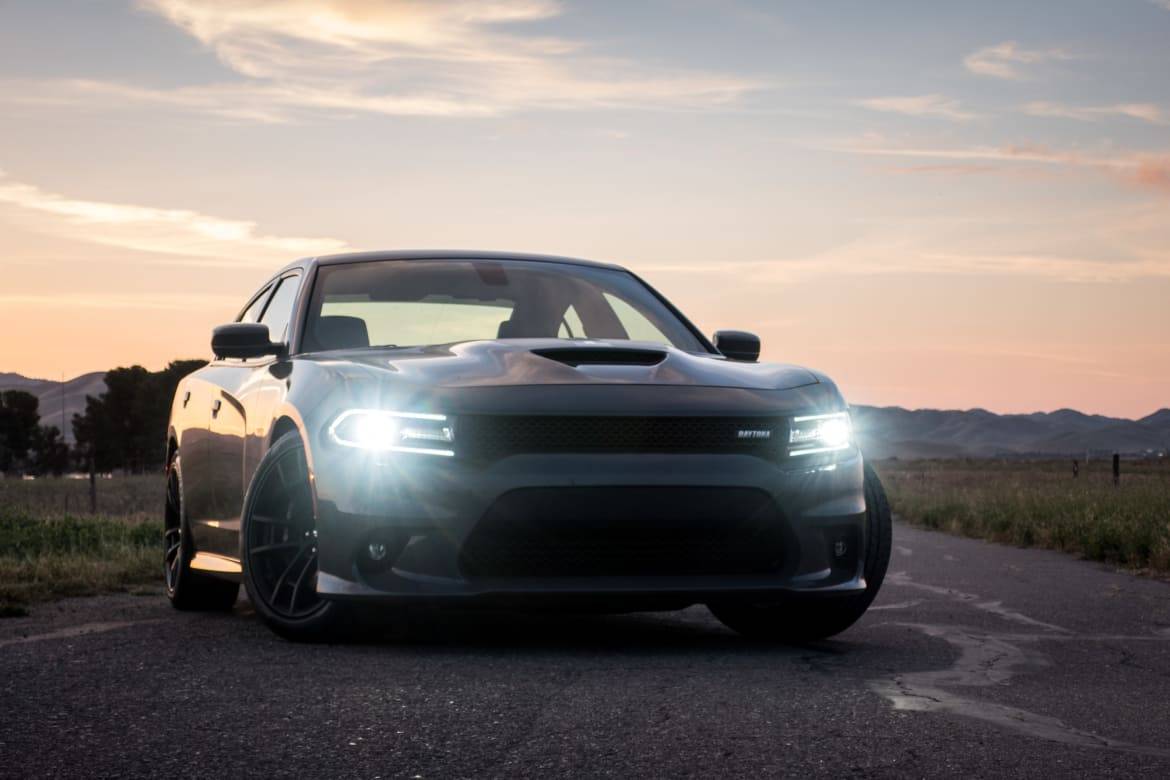 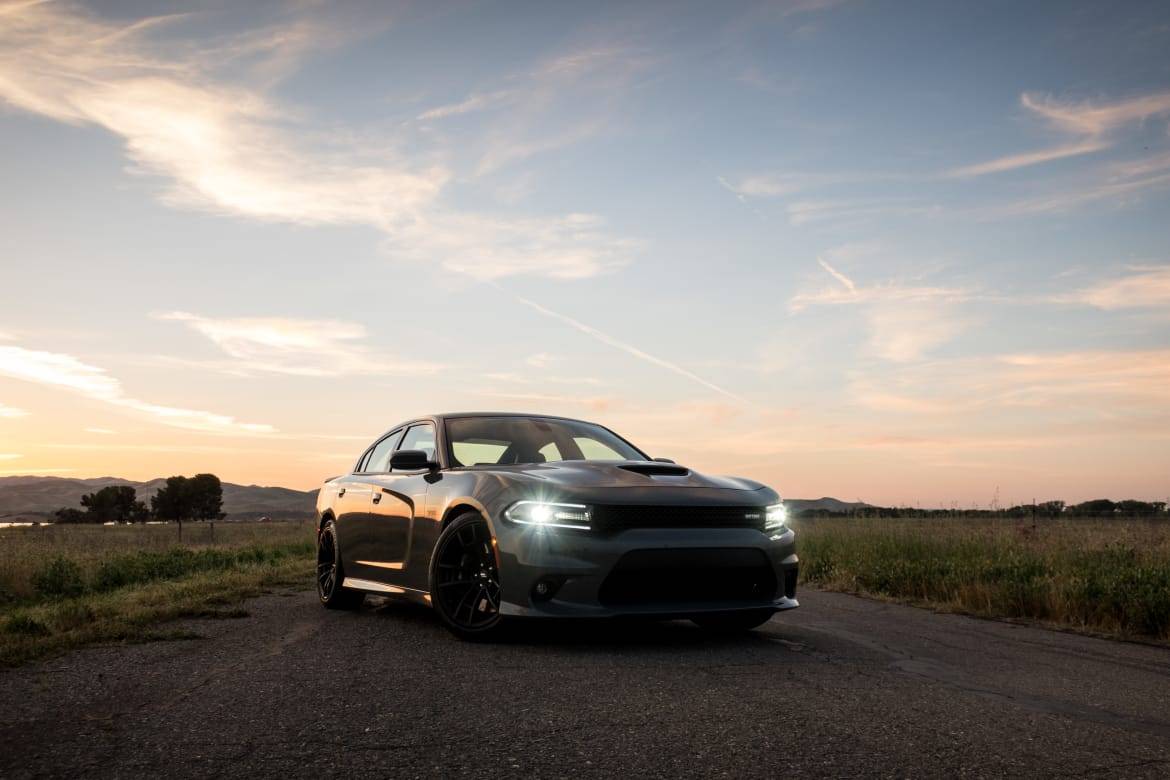 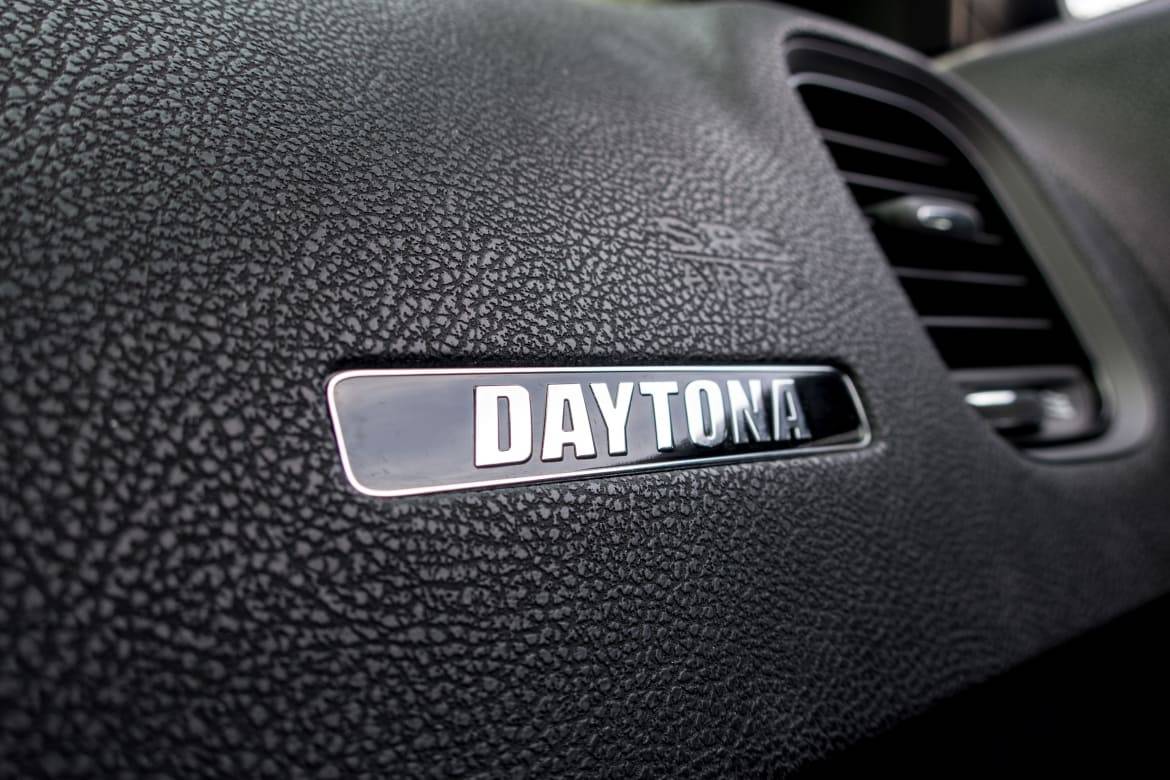 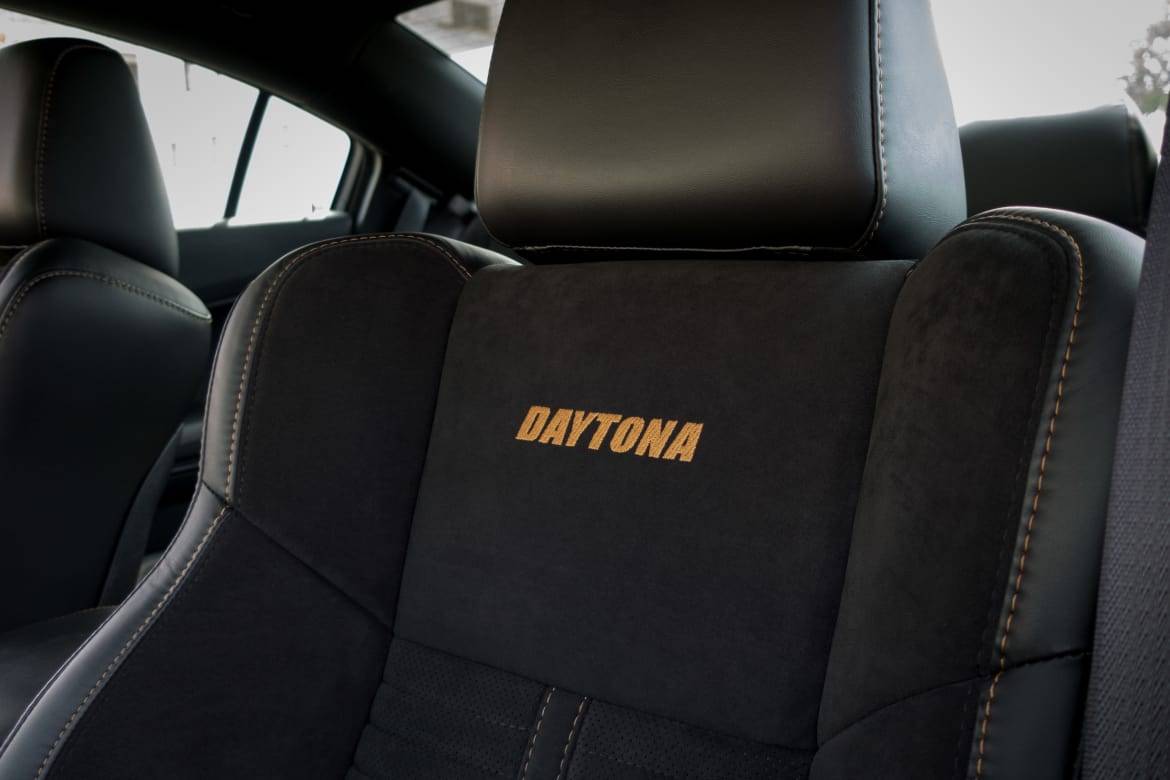 The Daytona is distinguished by deeper side skirts, a black rear spoiler and trunk lid, “Daytona” graphics on the rear fenders, a unique badge on the grille and a Hemi logo tape stripe on the hood. It also comes in a wide-ranging color palette, from bright greens and yellows to the very cool flat-looking color shown on this vehicle that Dodge calls (and this is one of the few paint names I like) “Destroyer Grey.”

The 2017 Charger Daytona appeals to me on both a visceral and a practical level. It’s kind of the dream for an enthusiast – tire-smoking power, good dynamics and room for a couple of child-safety seats. I could justify ponying up for one of these much more than a comparable Challenger or another muscle car.