Don’t let the Mustang name fool you, Ford may have anchored its new Mustang Mach-E electric SUV to the company’s past by tagging it with the Mustang title, but this is one of the most forward-looking vehicles we’ve seen from the company in quite some time. After poring over the interior, trying the new technology and even getting a ride-along in a prototype, that future can’t get here soon enough. It’s the most exciting thing I’ve seen from Ford in years.

There will be a lot of debate about the electric SUV’s exterior, especially given the first part of its name. Mustang elements are sprinkled throughout, and the Mach-E‘s headlights, taillights and numerous pony logos are lifted straight from the sports car. But it really doesn’t feel like a Mustang from the outside or inside; taken on its own, it’s a handsome SUV and I don’t really see how the muscle car affiliation helps or hurts it.

What’s for certain is that the Mach-E has a very different mission than the Mustang coupe, and it handles those different aims with some creative solutions and new technology that left me rather impressed.

Now This Is a Screen

The centerpiece of the interior is the 15.5-inch touchscreen that takes up much of the real estate on the dashboard and controls basically all of the car’s functions save the gear selector and (thankfully) a volume knob housed in the lower part of the screen. This isn’t the first vertically oriented screen from Ford, which put a 10.1-inch screen in the redesigned 2020 Explorer. However, in that integration, it wasn’t quite clear what the Explorer gained from flipping its screen to vertical (minus smaller smartphone mirroring of Apple CarPlay and Android Auto).

That’s not the case here, because its larger size makes sense to orient the screen this way to make it more reachable for front occupants — if it were horizontal, there’s no way you could reach the opposite end (especially while driving). As it is, I could sit where I would drive and easily reach both sides as well as the top and bottom of the screen without leaning forward.

The screen is powered by Ford’s next-generation Sync 4 multimedia system, and it makes fine use of the additional space. The lower part of the screen is a series of “cards” that the driver can customize to show the information they want to see most. Ford also did a good job of flattening out the system’s menus and bringing more functions up to one or two presses away from the homepage; dedicated small icons at the top of the screen open the app tray or vehicle settings.

One more item I was curious about but didn’t get a chance to fully test were the driver profiles. Ford says the Mach-E can learn your behavior and offer up “suggestions” to you. For example, you call your mother every Wednesday; climb into the car on a Wednesday, and a small reminder will pop that suggests you might want to give her a ring. I can hear my mom clapping somewhere in the distance.

Sync 4 adds wireless Apple CarPlay and Android Auto integration, making it even easier to use those services if they’re your preferred method.

Ford had prototypes on hand in which we got to take a short ride. The vehicles were Premium models with all-wheel drive (whether or not it was an extended-range model was not clarified).

Acceleration was snappy as you’d imagine, given the instant delivery of the Mach-E Premium’s 417 pounds-feet of torque. I was actually more impressed by its performance in the slalom section. The Premium rides on a fixed firmness suspension, but it did quite a good job of mitigating body roll, and the Mach-E remained impressively flat through the tight turns (the low center of gravity helps with this, as well).

The most interesting part of the drive to me was the piped-in “engine” noise you get in the cabin. The Mach-E comes with three drive modes: Whisper, Engage and Unbridled, each with its own sound profile. The high-frequency outside noise for pedestrian safety doesn’t get changed, but inside there’s a big difference. In Whisper, you don’t really hear much of anything other than a light whooshing, while in Engage, the whooshing goes up a couple of notches but sounds nearly the same. The big difference is found in Unbridled, which pumps in a noise that almost sounds like an engine, which gets louder the quicker the Mach-E accelerates. I get why Ford did this — tying auditory cues to throttle inputs makes people feel more comfortable. But to hear something that’s akin to a muffled gas engine in an electric car struck me as odd.

The interior’s minimalism and screens might grab the most immediate attention, but the rest of the interior bears note — there are large storage spaces in many places. Up front, there’s a sizable bin with a wireless charging pad under the screen and between the seats, the armrest folds up to reveal a bin and a flat spot to keep a purse — a request Ford says it gleaned from drivers who want to keep their belongings close by for an added sense of security. The speakers have been placed high up on all four doors to open up larger door pockets.

The Mustang Mach-E feels on the smaller side of a compact SUV (Ford Escape, for example) when it comes to interior size, but it feels larger than it actually is for occupants (more on that later). It has enough room to fit adult passengers on the outboard seats and the middle seat in a pinch. The other good news is that in an all-wheel-drive electric vehicle, the motors are mounted to the axles, so you don’t have a large seat hump to contend with. That makes those occasions where you have to put three passengers in the back more bearable.

Headroom is especially ample with the available fixed panoramic glass roof. It’s gigantic, stretching all the way to right above the backseat passengers, and it doesn’t have a cover, so the ceiling seems very tall in the middle, which makes the whole vehicle seem bigger inside. Ford said the glass will block ultraviolet rays and heat from entering the cabin, but I’d like to reserve judgment on that until we can get a Mach-E out on a hot day in the sun.

Though we’re still waiting on final confirmation for some of the figures surrounding the Mustang Mach-E, I’ve seen and felt enough to get excited. Provided it can come close to its 300-mile range goal for extended-battery models, this has a lot of potential. Though there’s a lot of technology packed into the new multimedia, it feels well integrated rather than extraneous or unnecessarily complicated. It’s there to make the Mach-E easier to use and to live with.

Full judgment must be reserved until we get behind the wheel and see what the final production models look and feel like, but from what Ford showed here in Los Angeles, the bones are good. The Mustang Mach-E will start to roll into dealerships at the end of 2020. 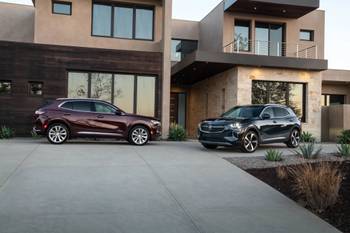 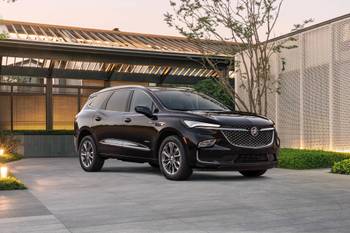