Looks like: Mercedes designed the Model S; the all-electric S-Class of the future

Mercedes-Benz is finally getting on the electric vehicle bandwagon in North America and preparing to take on the Tesla Model S (as well as the Audi E-Tron GT and Porsche Taycan). The first all-electric Mercedes to arrive in the U.S. will be the EQS sedan. (Despite debuting first, the EQC SUV will not be sold here, at least for now.)

Mercedes says the EQS is the first vehicle from the automaker designed from the ground up as an EV. In naming the car “EQS,” Mercedes intends for it to live up to the letter “S” in its name and has built what it believes customers expect from an all-electric S-Class. The EQS will come in two versions, the EQS450 Plus with a single motor and rear-wheel drive, and the EQS580 4Matic with dual motors and all-wheel drive.

Like its Mercedes-AMG performance vehicles, Mercedes is making its electric vehicles part of the Mercedes-EQ brand. The EQS is technically the “Mercedes-EQ EQS,” which is both a mouthful and potentially confusing. 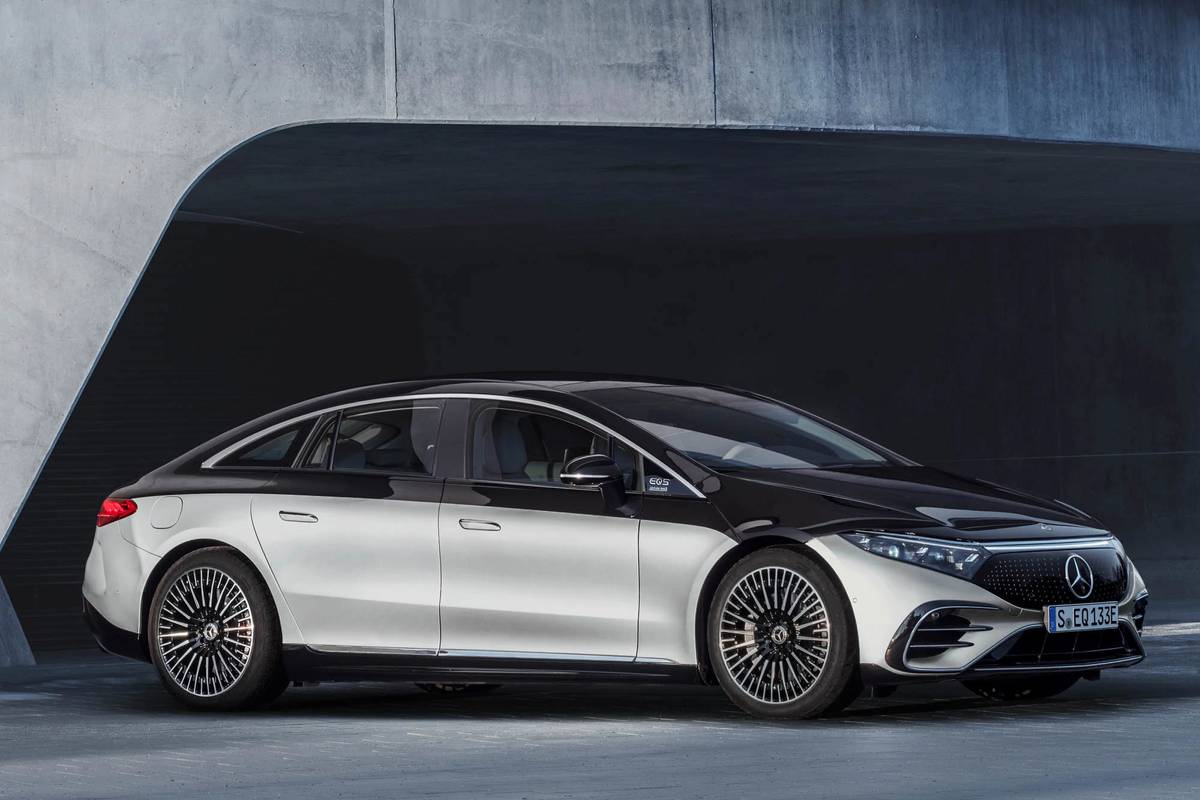 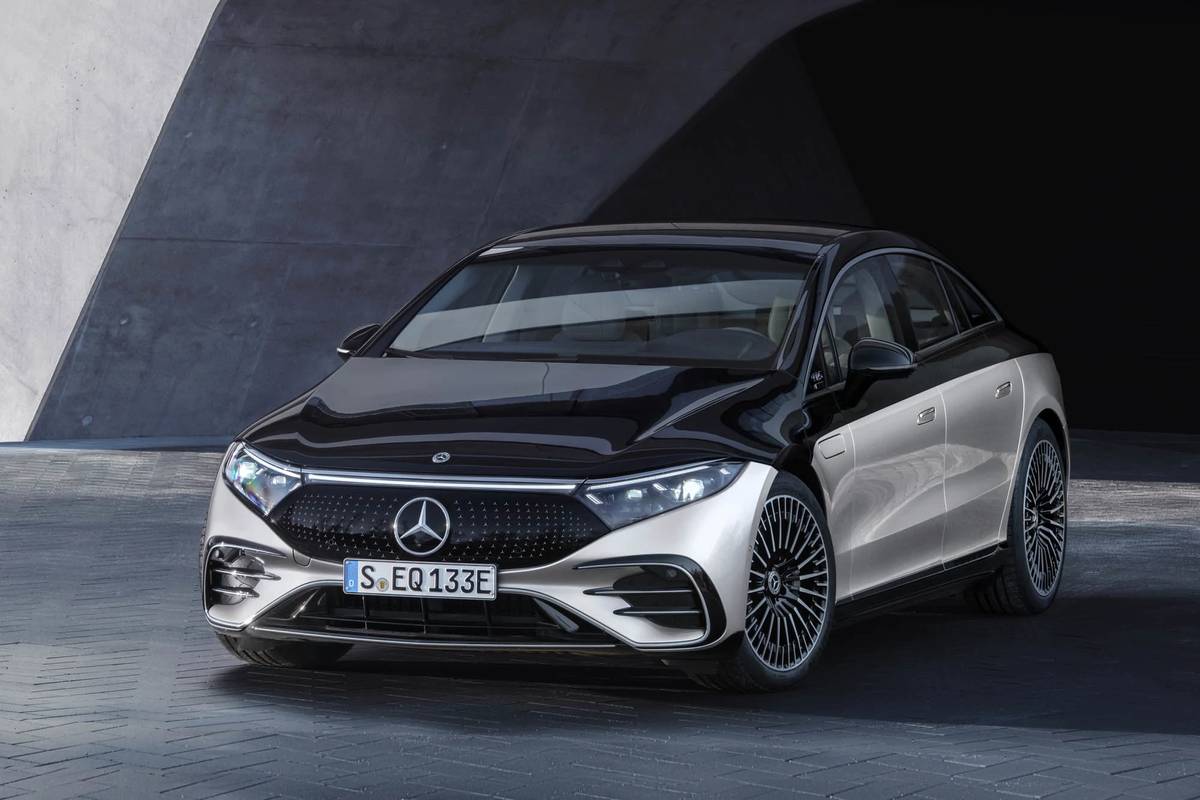 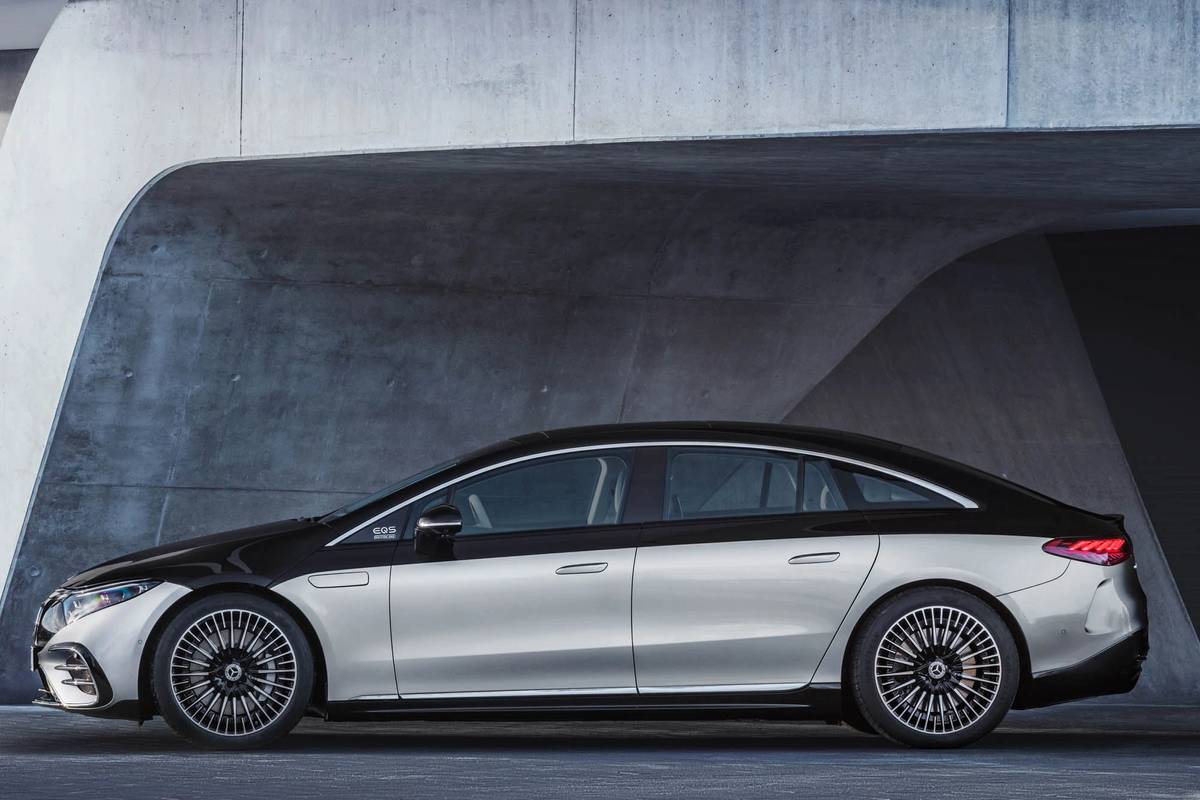 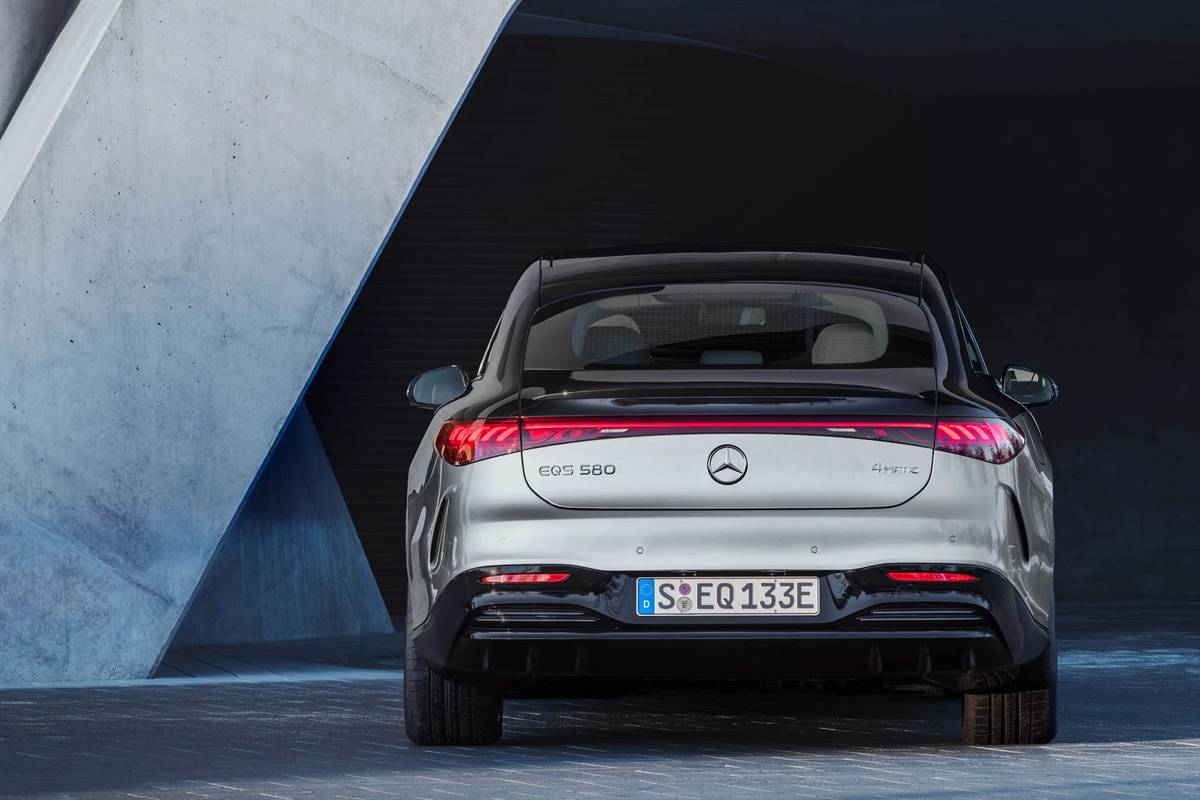 The EQS is styled in what Mercedes calls a “one-bow” design. From the grille to the rear, the car forms a single arc, or bow. To my eyes, the outer appearance is very much a Mercedes take on the Tesla Model S silhouette, which has become something of a de facto standard for larger electric sedans. At just over 205 inches long, the EQS is slightly shorter than the current S-Class, with a more cab-forward look and a sleek overall shape that gives it a coefficient of drag of 0.20, according to Mercedes (Tesla claims the latest Model S has a 0.208 coefficient of drag). 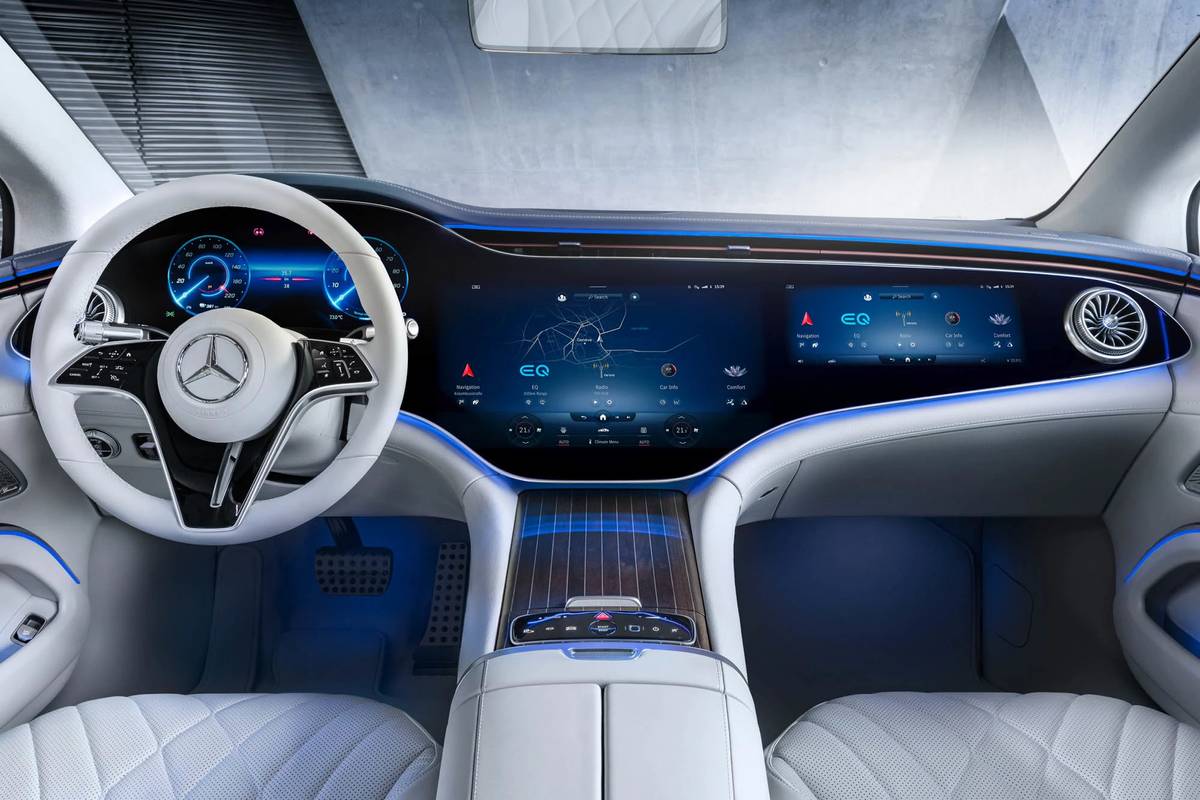 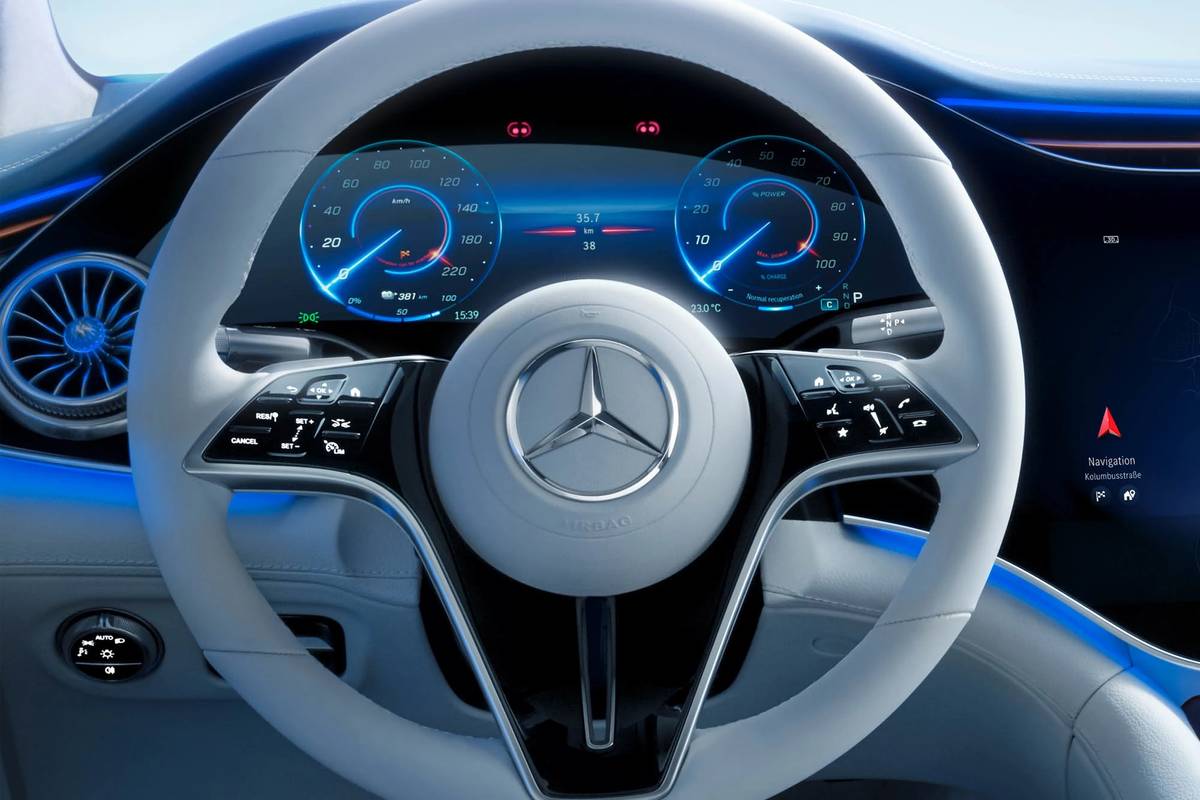 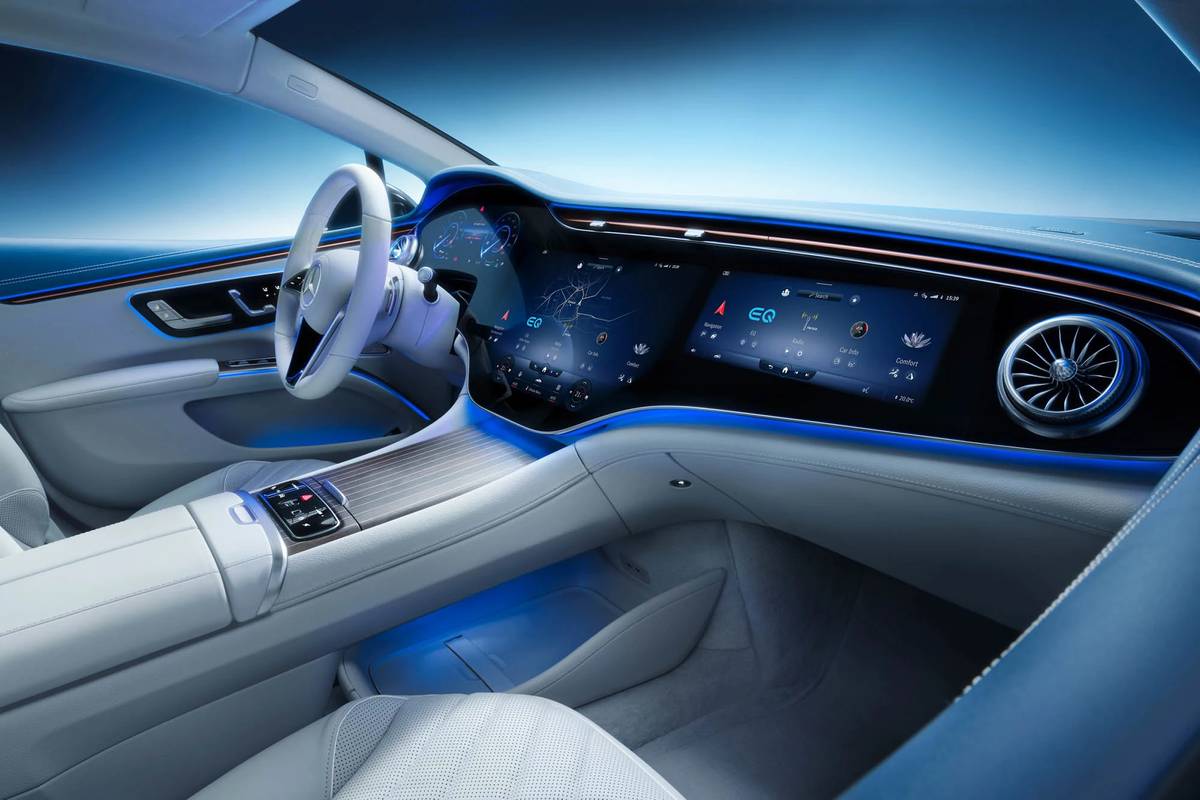 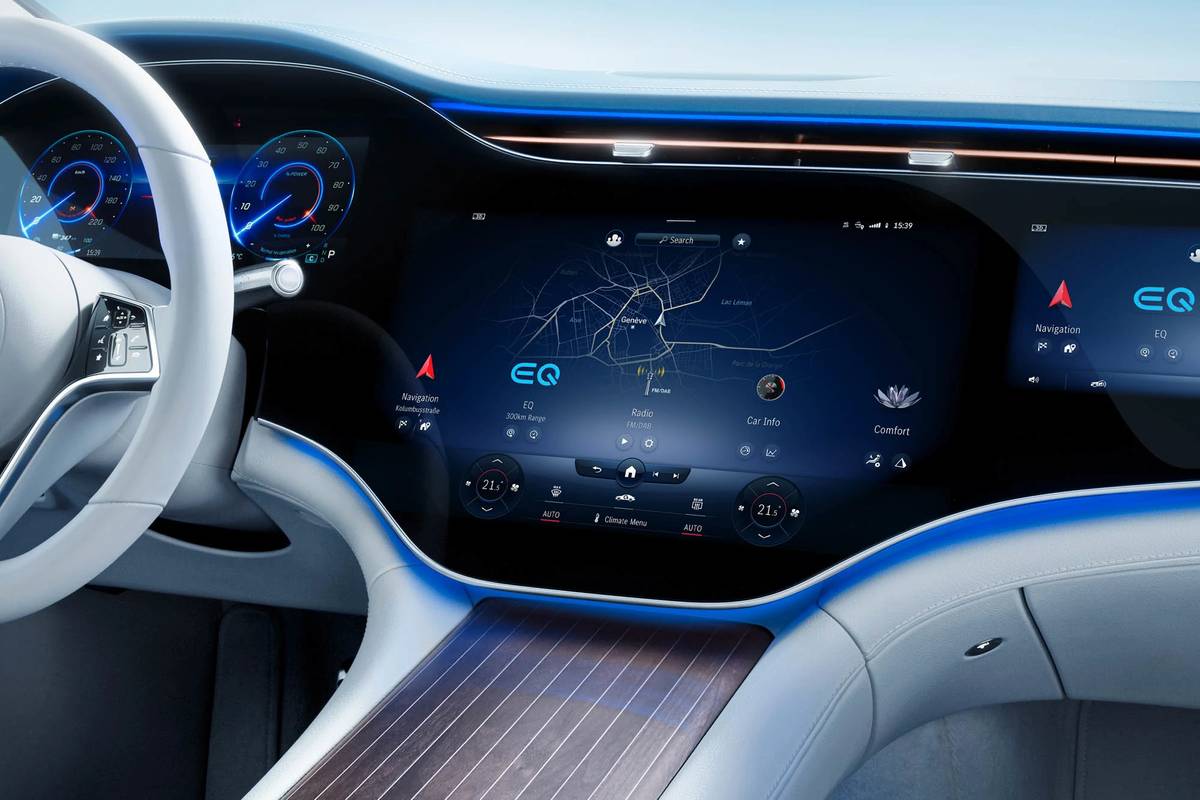 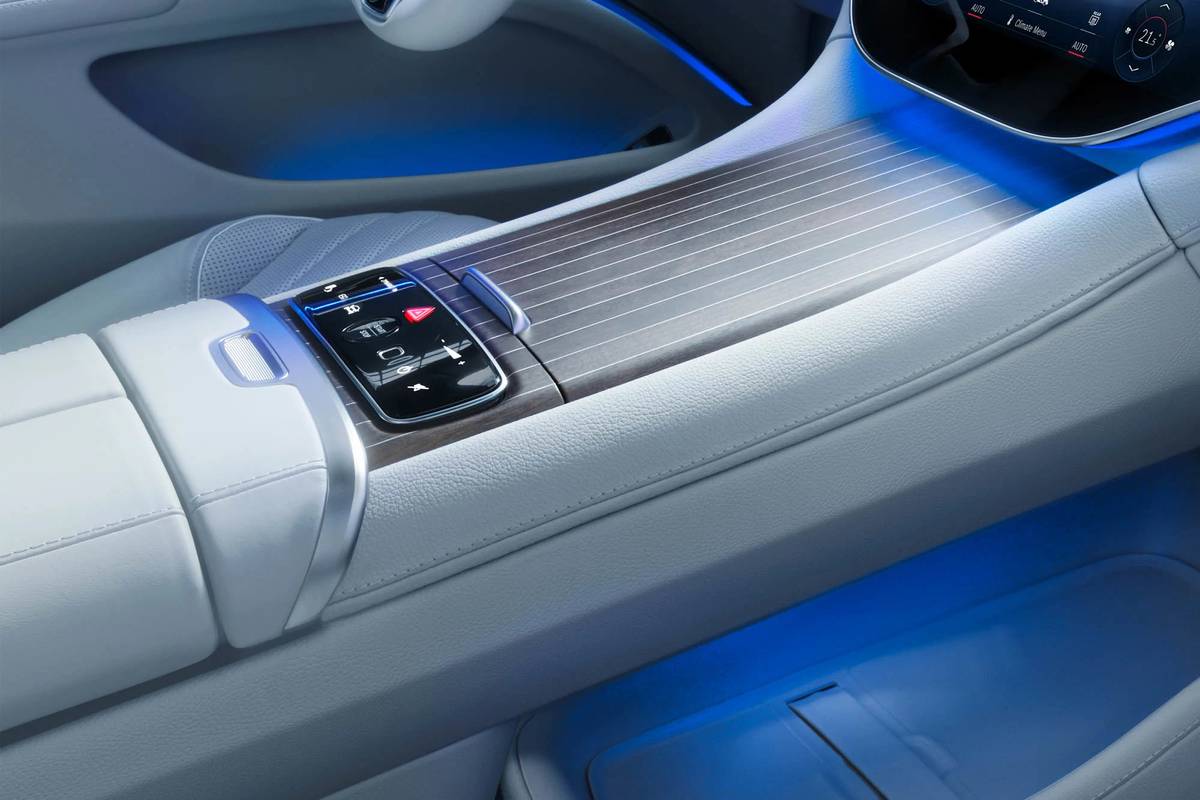 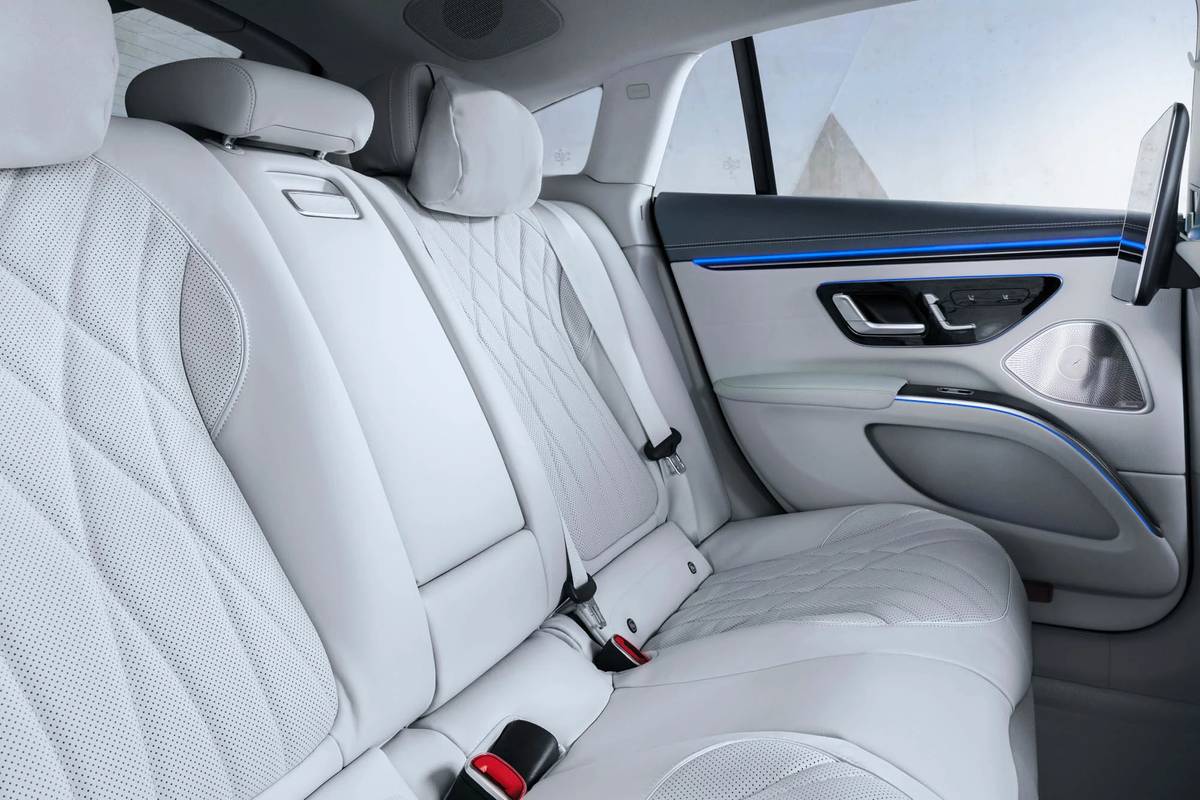 Befitting a flagship luxury sedan, the EQS is loaded with both technology and comfort features inside. The centerpiece is the MBUX Hyperscreen, which comes standard on the EQS580 and is a 56-inch-wide curved band of screens divided into a 12.3-inch digital instrument panel, 17.7-inch central touchscreen and 12.3-inch passenger display (the individual screen measurements are diagonal). The digital instrument panel and a 12.8-inch central touchscreen are standard on the EQS450 Plus.

Buyers can choose between standard comfort or optional sport front seats, and high-quality materials including leather and wood can be found throughout the cabin. Both front and rear seats include comfort-oriented head restraint pillows, too. To soothe occupants’ senses, ambient lighting can be combined with optional interior fragrances and a new set of ambient soundscapes. The EQS also has built-in HEPA filters to mitigate the intrusion of unpleasant odors into the cabin.

The base EQS450 Plus will come standard with a single electric motor driving the rear wheels, producing a Mercedes-estimated 329 horsepower and 406 pounds-feet of torque, which the automaker says will propel the big sedan to 60 mph in 5.5 seconds. Moving up to the EQS580 nets buyers standard all-wheel drive and dual motors with a total system output of 516 hp and 611 pounds-feet; Mercedes says the 580 will hit 60 mph in just 4.1 seconds. The 580’s numbers may sound like a performance version to many, but Mercedes says an actual performance version of the EQS is planned with “up to 630 hp.” An air suspension is standard, and the EQS is also available with four-wheel steering to increase maneuverability.

Range estimates are currently only available using the European test cycle, which differs from EPA testing. Both the 450 Plus and 580 are estimated to have a range of around 480 miles. We’ll have to wait and see how the EPA rates the EQS, but a 400-plus-mile range doesn’t seem out of the question.

Mercedes’ estimated charging figures for the EQS include charging from 10% to 100% using a 240-volt/32-amp home charging system in 11.25 hours, and from 10% to 80% in 31 minutes using DC fast charging at 110 kilowatts. Mercedes says the EQS can charge up to 200 kW at compatible DC fast-charging stations.

The EQS will come standard with a host of advanced driver assistance and safety technology. They include adaptive cruise control, hands-on lane-centering steering assistance, semi-autonomous assist that can keep the car moving in its lane in stop-and-go traffic at speeds up to 35 mph, blind spot warning with collision intervention, automatic forward emergency braking with pedestrian and cross-traffic detection, and more. Among many passive-safety features, the EQS includes Pre-Safe Impulse Side, which can quickly inflate the side bolster of either front seat and move an occupant up to 2.75 inches away from an impending side collision.

A Mercedes representative said the EQS will be capable of Level 3 autonomy in the future, but whether that will be available in the U.S. is not yet clear.

The EQS450 Plus and 580 will arrive in dealerships in the fall, though it’s not known when the “performance” version may appear. Pricing also has not yet been announced.