Here is the latest entry in the popular (and crowded) class of compact SUVs from a brand that’s been struggling to regain relevance in the U.S.:  Japanese automaker Mitsubishi, which is pinning its latest hopes on renewing mass appeal with the new 2022 Outlander. A complete redesign from top to bottom thanks to Mitsubishi’s newfound partnership with Nissan, the new Outlander comes on a new platform with a new powertrain, new styling and new mission to deliver a more premium experience.

The biggest way Mitsubishi seems to be looking to get noticed is through some wild styling and extensive use of unusual themes to the various looks of the SUV. The overall Mitsubishi experience is now being sold as “I-Fu-Do-Do,” which in Japanese means “authentic and majestic,” according to the company. That supposedly guides the overall design ethos of the Mitsubishi brand, but this is further broken down into the overall theme for the Outlander, which Mitsubishi says is “Bold Stride.” 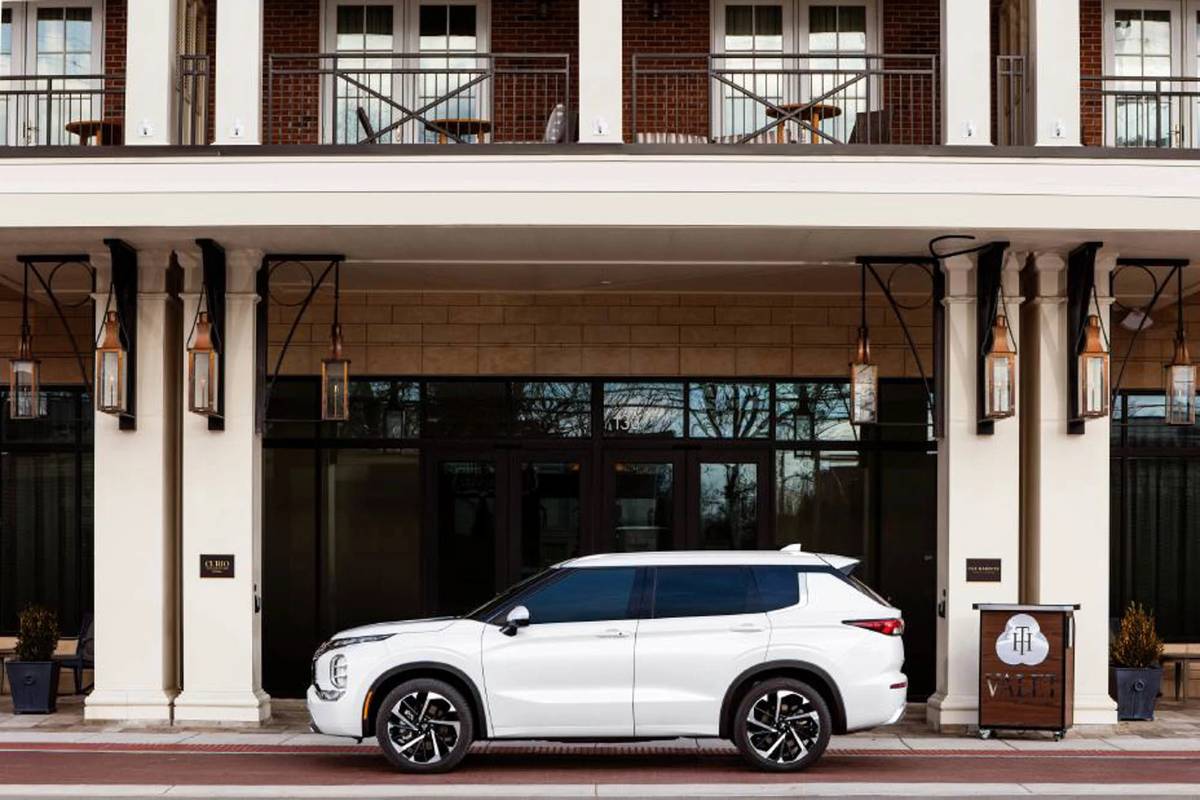 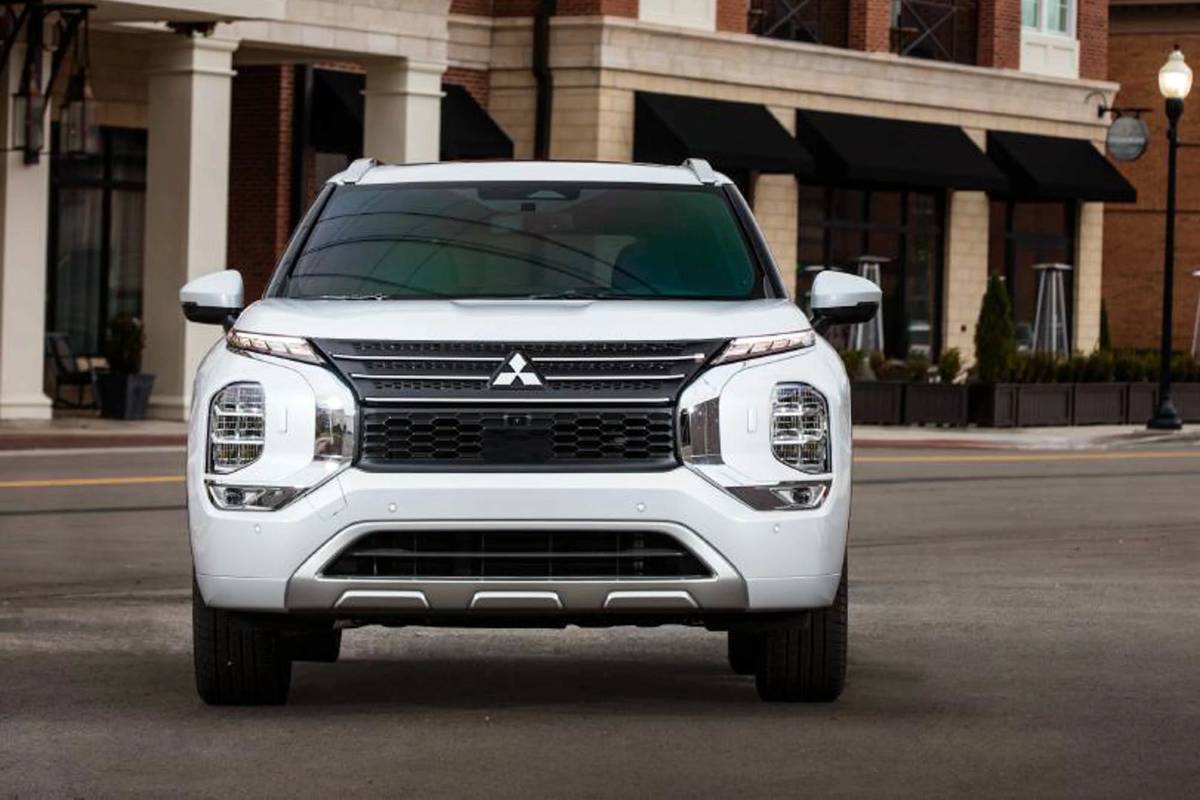 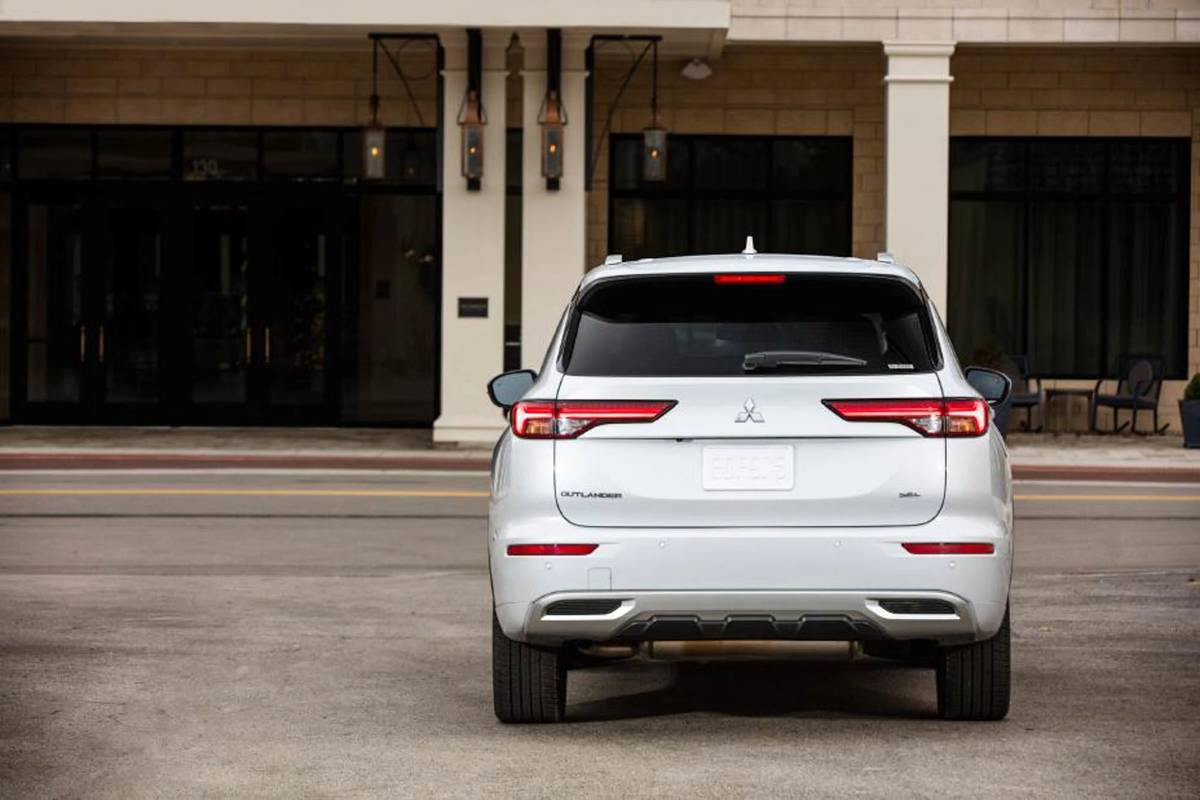 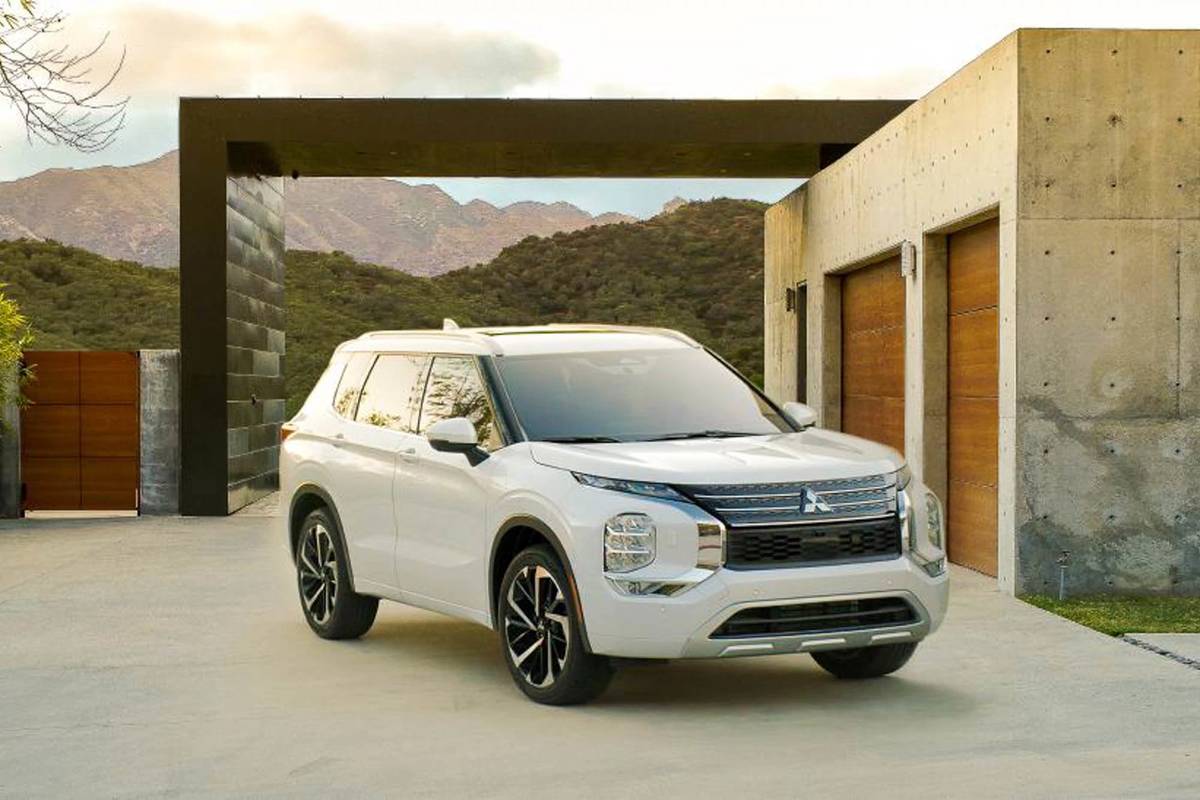 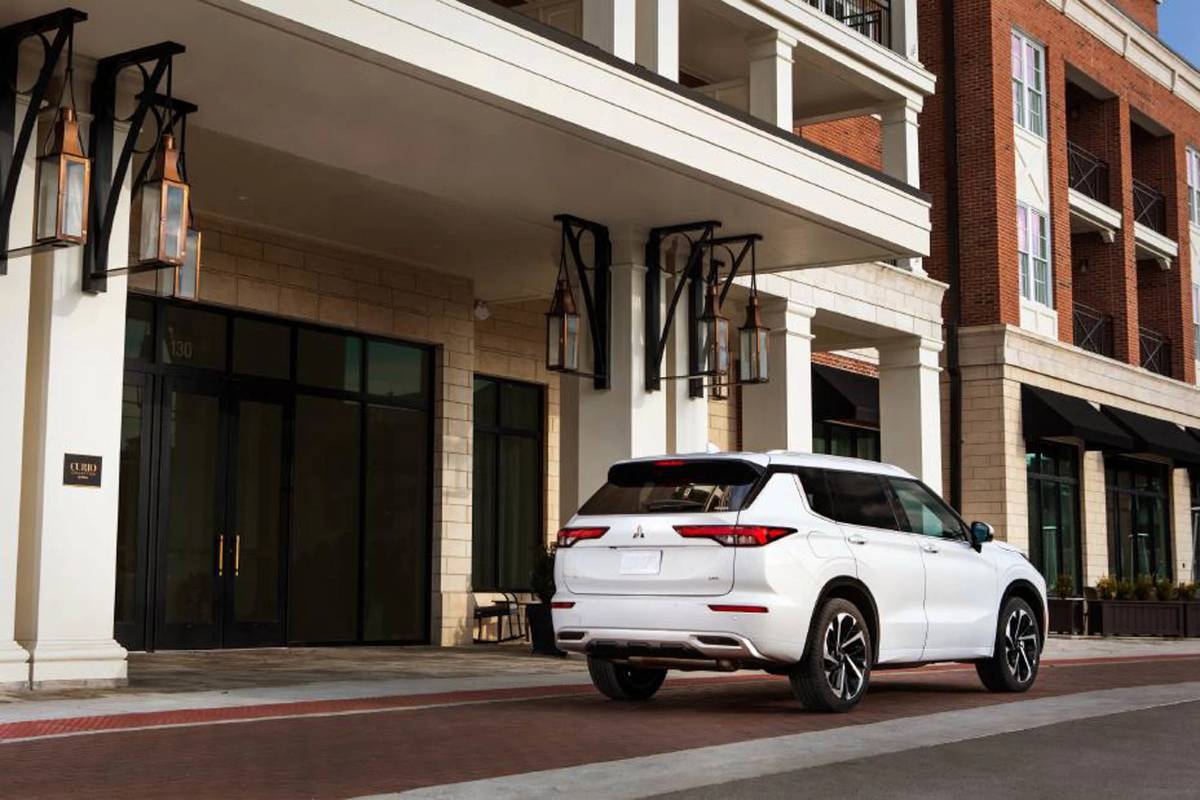 Furthermore, each view of the Outlander gets its own design theme, too. The front styling is the most … um, bold, with a “Dynamic Shield” theme that tries to explain the new grille and separated lights — daytime running lamps up high and high- and low-beam headlights down low, all of it incorporated into chrome trim lines that appear decidedly distinct. The profile is more conventional, with surprisingly prominent front and rear overhangs lengthening the look, tied together with sculpted panels and a floating-roof concept that accentuates the D-pillar in what Mitsubishi calls a “jet tail fin.” Eighteen-inch wheels are standard, with 20-inch wheels as an option. The rear view is now described as a “Hexaguard Horizon,” with a hexagonal look to the tailgate accentuated by slim, horizontal taillights.

The overall look (in Mitsubishi’s photos, at least) is best from the rear-three-quarter view, where the new Outlander projects a stylish, modern take on the traditional two-box SUV shape. Eight colors will be available on the Outlander for the U.S., including a new Black Diamond paint; curiously, basic white isn’t among them.

The switch to a new platform comes with more interior room, according to Mitsubishi, as the new Outlander is 2 inches wider inside than its predecessor. New packaging also means better legroom for front and backseat occupants, who get a 1.0-inch and 1.1-inch boost, respectively. A third row is standard, but it will almost certainly be niño-sized.

The all-new interior comes in black, gray or a leather-trimmed brown, depending on which of four trim levels you choose: ES (cloth), SE (suede combination), SEL (leather) or SEL Touring (semi-aniline brown leather). Mitsubishi is upping its materials game, as well, with a considerable effort to include real metals, soft-touch padding, diamond-cut knurled knobs, and updated switches and buttons to improve the quality perception. 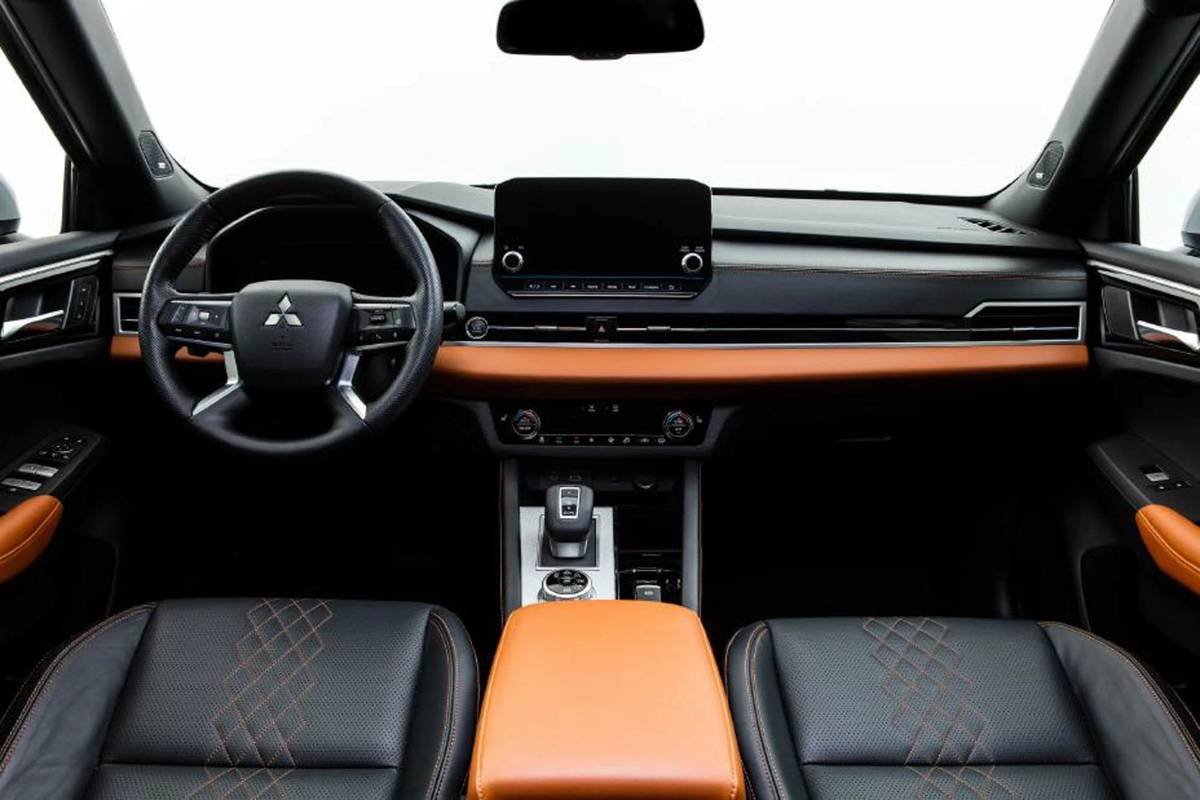 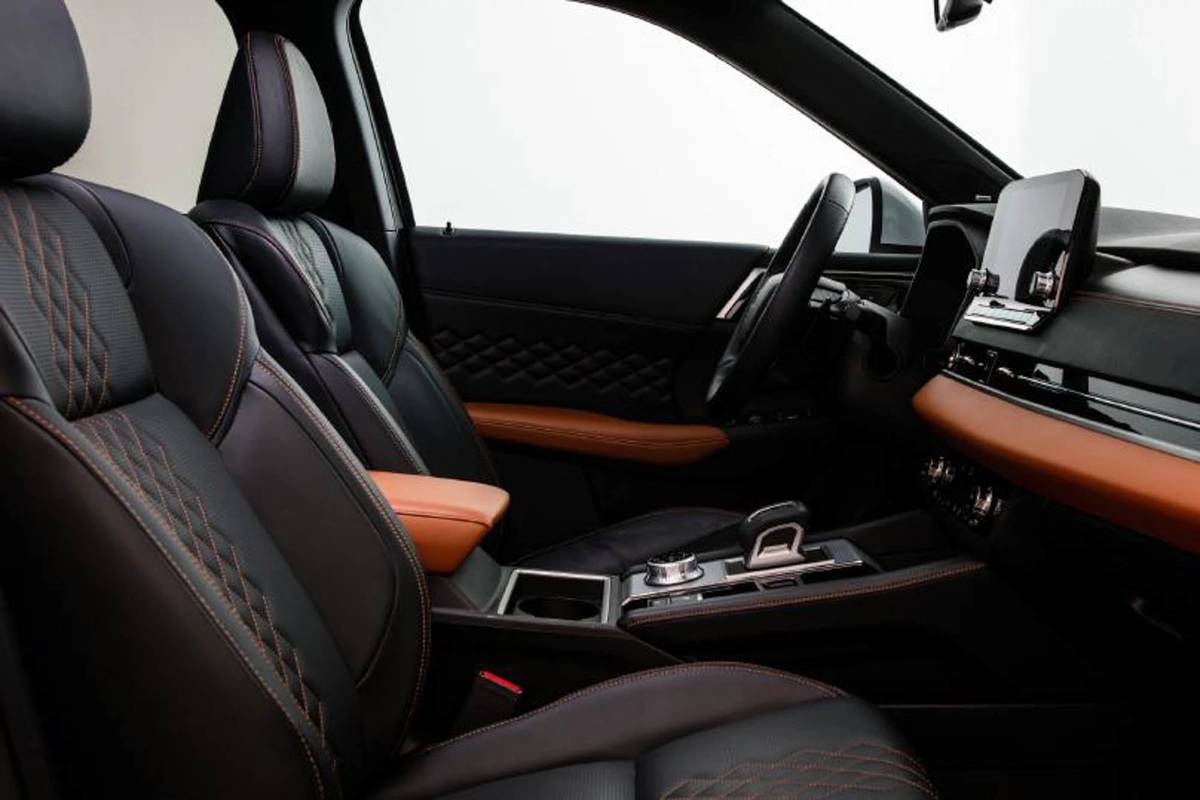 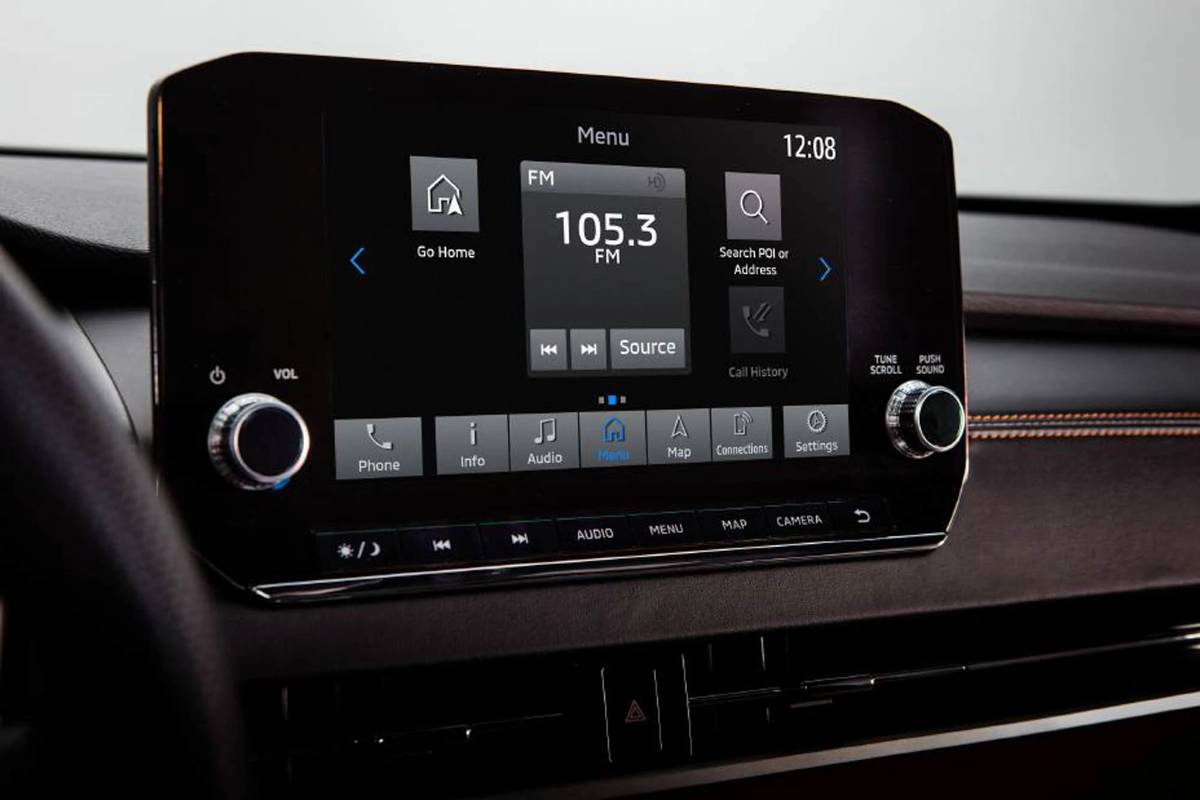 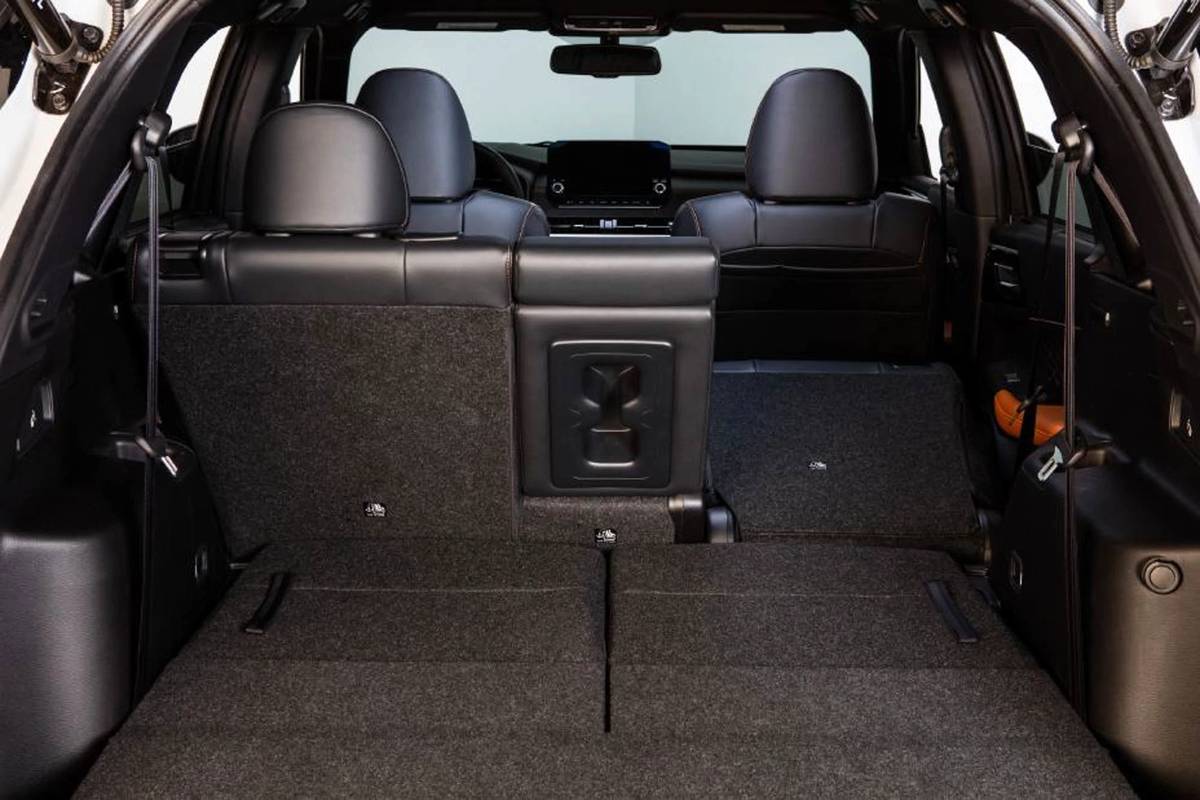 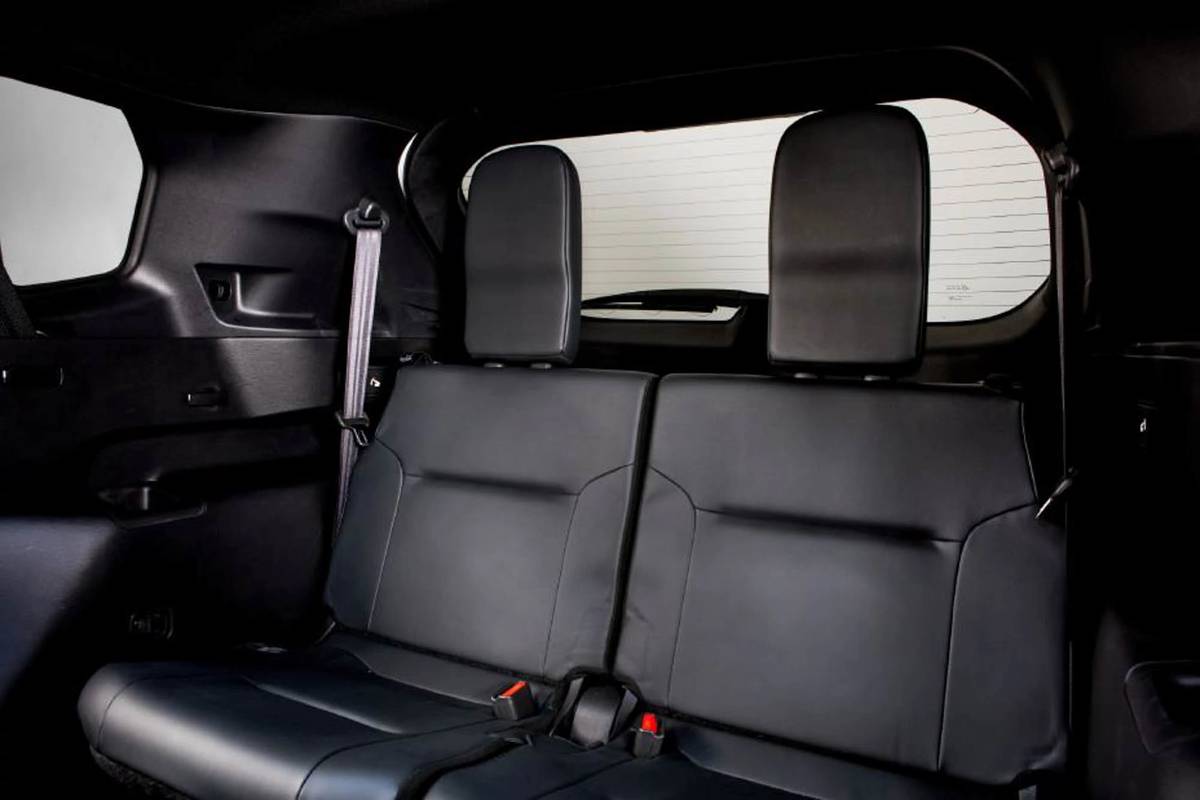 A new, horizontal look comes to the dashboard, which gets a major upgrade in terms of electronics. The gauge cluster is either a standard 7-inch display or a fully digital 12.3-inch display, Mitsubishi’s first. Optional interior equipment includes wireless phone charging with wireless Apple CarPlay and wired Android Auto, a 10-speaker Bose premium audio system, a 10.8-inch head-up display, and either an 8-inch or optional 9-inch dashboard touchscreens.

The big changes are here, thanks to Mitsubishi developing the Outlander with the help of its new partnership with the Renault-Nissan Alliance. That means some shared components like the standard 2.5-liter four-cylinder engine making 181 horsepower and 181 pounds-feet of torque, which drives the front wheels through a continuously variable automatic transmission. If this sounds a lot like the Nissan Rogue’s powertrain, that’s because it is. Where the Outlander differs, however, is in the details: shock absorber and spring tuning, bushings, tire sizes and brands, things like that.

One area that’s unique to the Outlander, too, is its all-wheel-drive system, which uses Mitsubishi’s long knowledge of such components to bring its Super All-Wheel Control system to the party. This allows the Outlander to incorporate six different drive modes for AWD vehicles: Normal, Eco, Tarmac, Gravel, Snow and Mud. The company also offers up those modes for the FWD vehicles, too, minus the Mud function.

And what of the Outlander’s plug-in hybrid variant? Mitsubishi did not immediately announce details, but spokesman Jeremy Barnes said that an all-new Outlander PHEV is forthcoming and the brand will “have more to say about timing a little down the road.”

The new Outlander offers up a full host of modern electronic safety features, including optional Mi-Pilot Assist, Mitsubishi’s integrated safety system that brings adaptive cruise control and lane-centering steering in a package that also incorporates the ability to adjust speed based on traffic sign recognition and information from the navigation system (when equipped). Stop-and-go traffic assist is also part of that package. Forward collision alert and prevention, lane departure warning and prevention, rear automatic emergency braking and driver attention alert are all also available.

The new 2022 Mitsubishi Outlander will start at $26,990 (including destination). Vehicles will hit showrooms in April.