The verdict: The new Estrema trim level of the Alfa Romeo Stelvio bridges the gap between lesser versions of the car and the fire-breathing Quadrifoglio, but its problematic powertrain and aging interior are definitely issues.

Versus the competition: The Stelvio banks on its looks and brand cachet, but newer competitors have better powertrains and more spacious, better-designed interiors.

Drivers hunting for a compact luxury SUV have a lot of options: Acura, Audi, BMW, Cadillac, Infiniti, Jaguar, Land Rover, Lexus, Lincoln, Mercedes-Benz, Porsche and Volvo all make one. The Stelvio debuted as a 2018 model, and it offers two powertrains in the U.S.: a 280-horsepower, turbocharged 2.0-liter four-cylinder engine that goes in all trims except the top Quadrifoglio (Italian for “four-leaf clover”). That car gets a gnarly Ferrari-derived twin-turbo V-6 that makes 505 hp. For the 2023 model year, there’s a new Stelvio Estrema trim that’s meant to bridge the gap between regular Stelvio models and the unique Quadrifoglio. I drove one for a week to see if Alfa has successfully spanned that rather significant chasm, but living with the SUV’s quirks and some dated characteristics led to a different conclusion entirely. 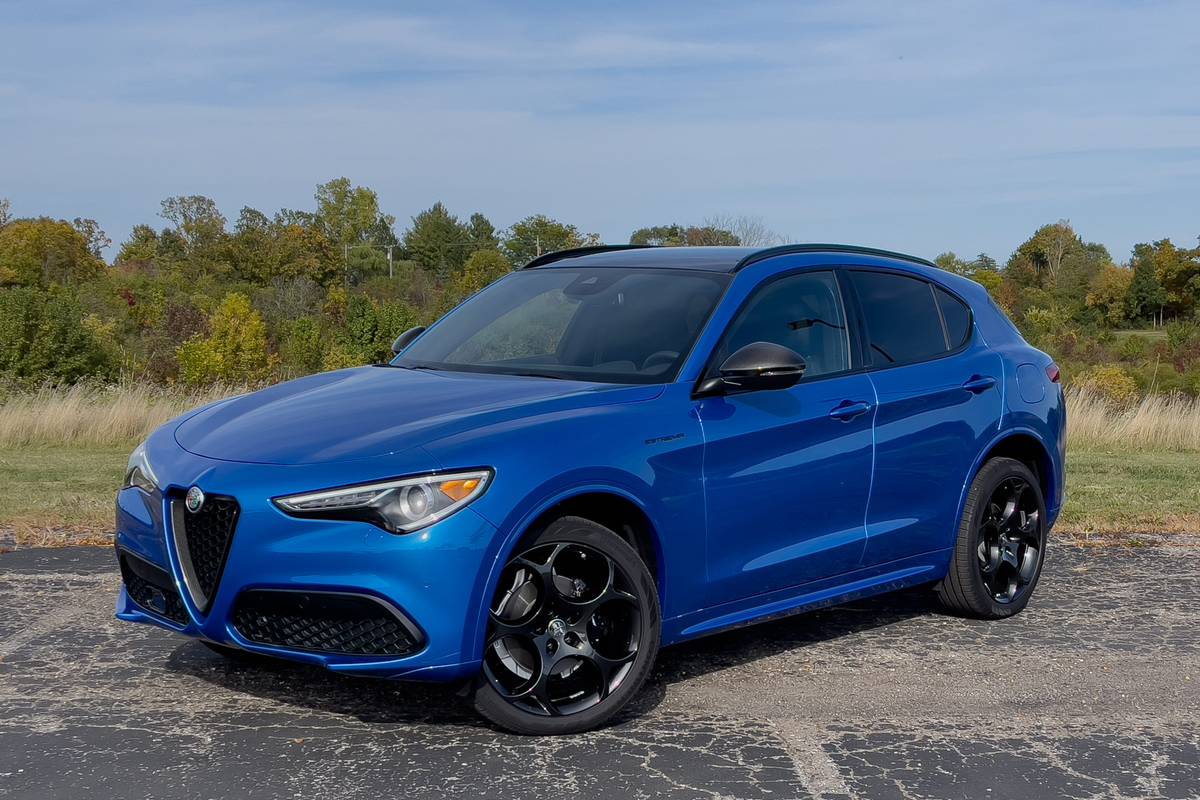 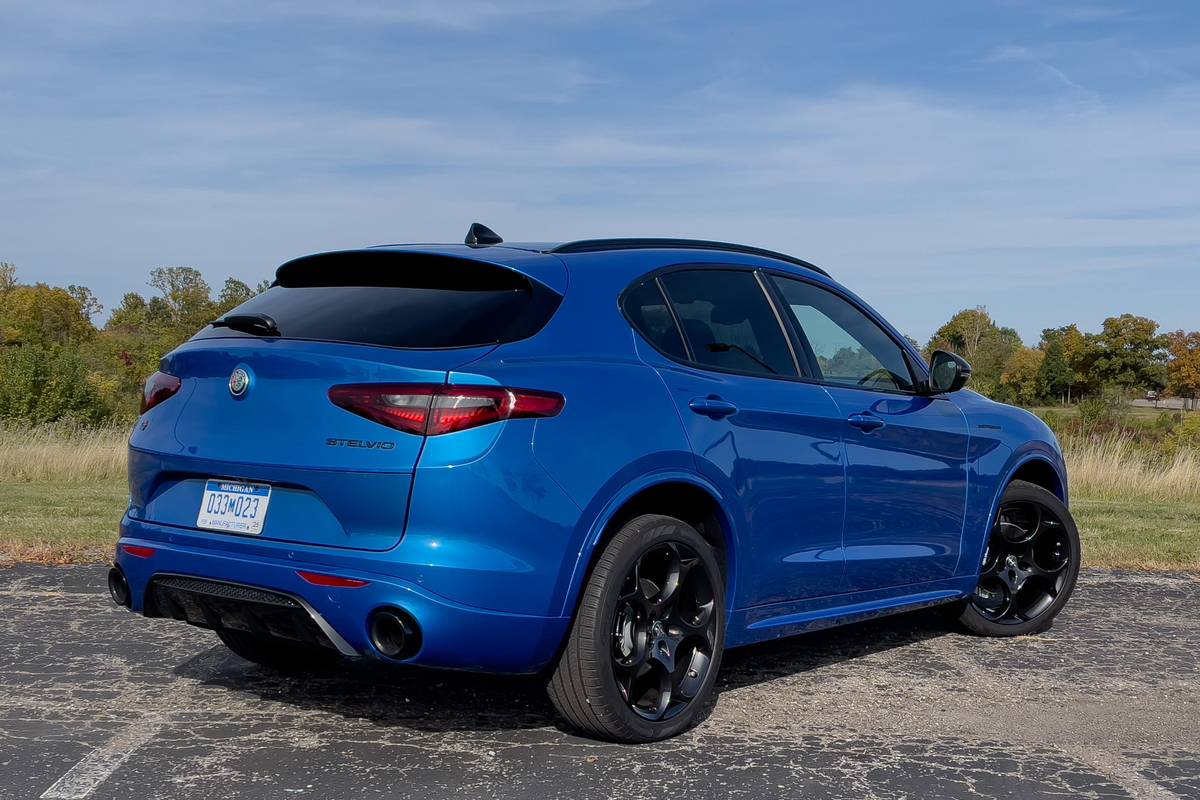 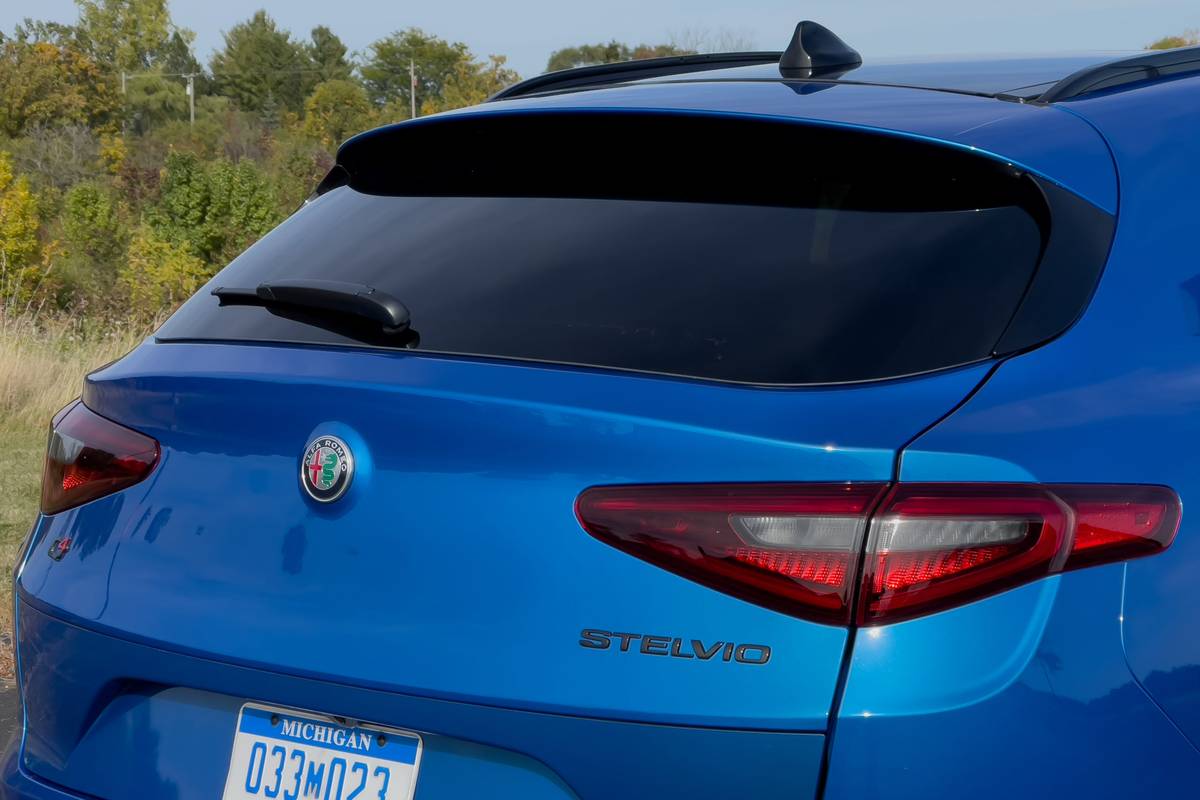 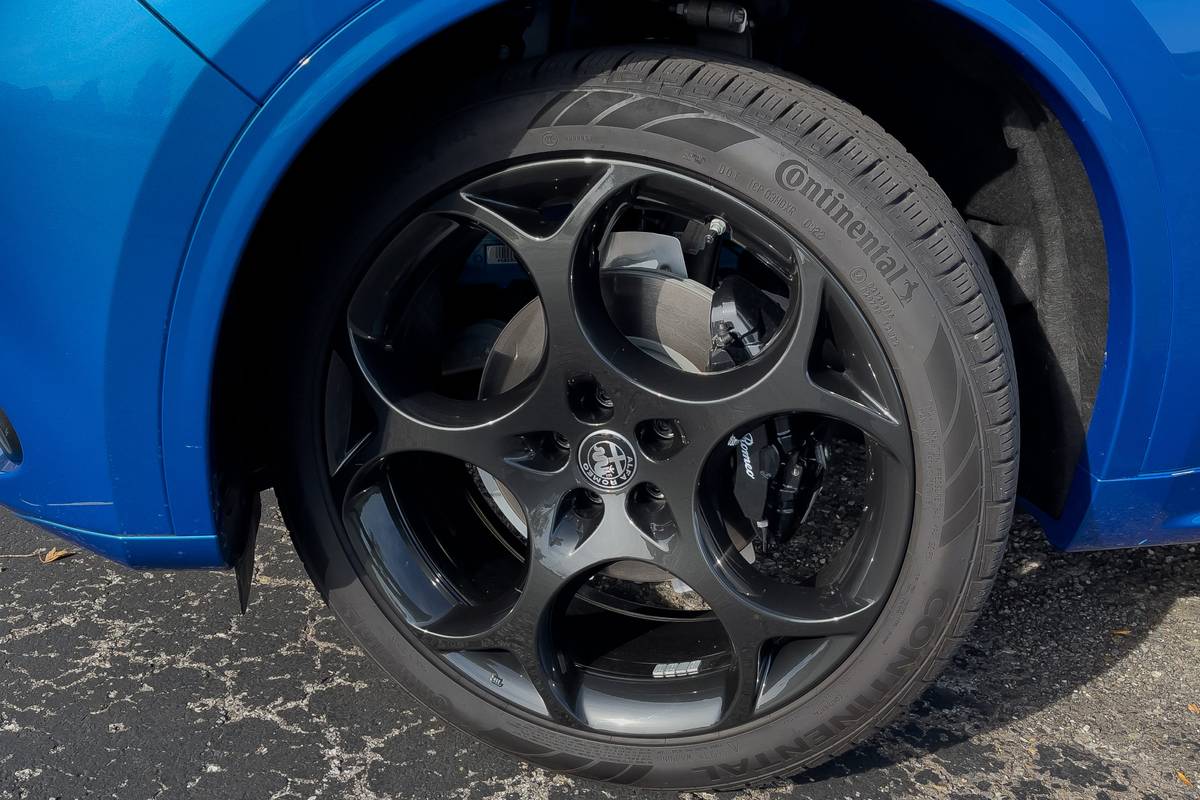 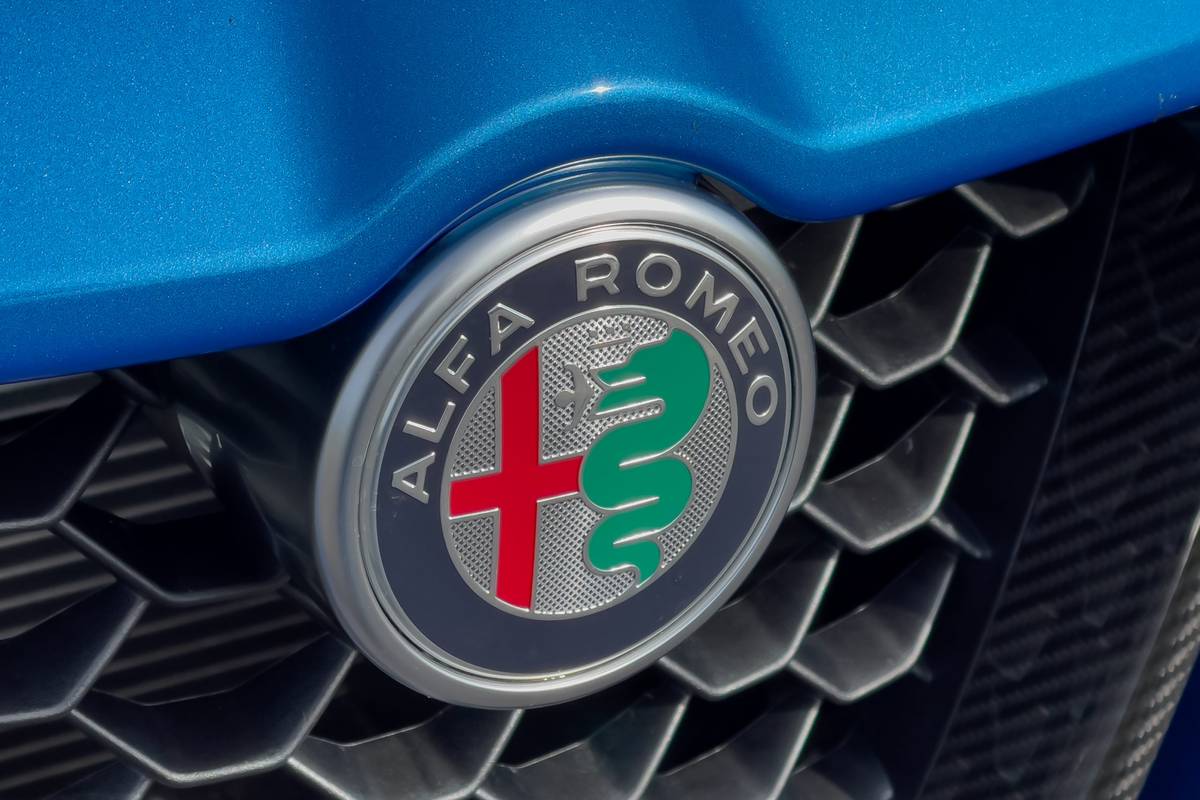 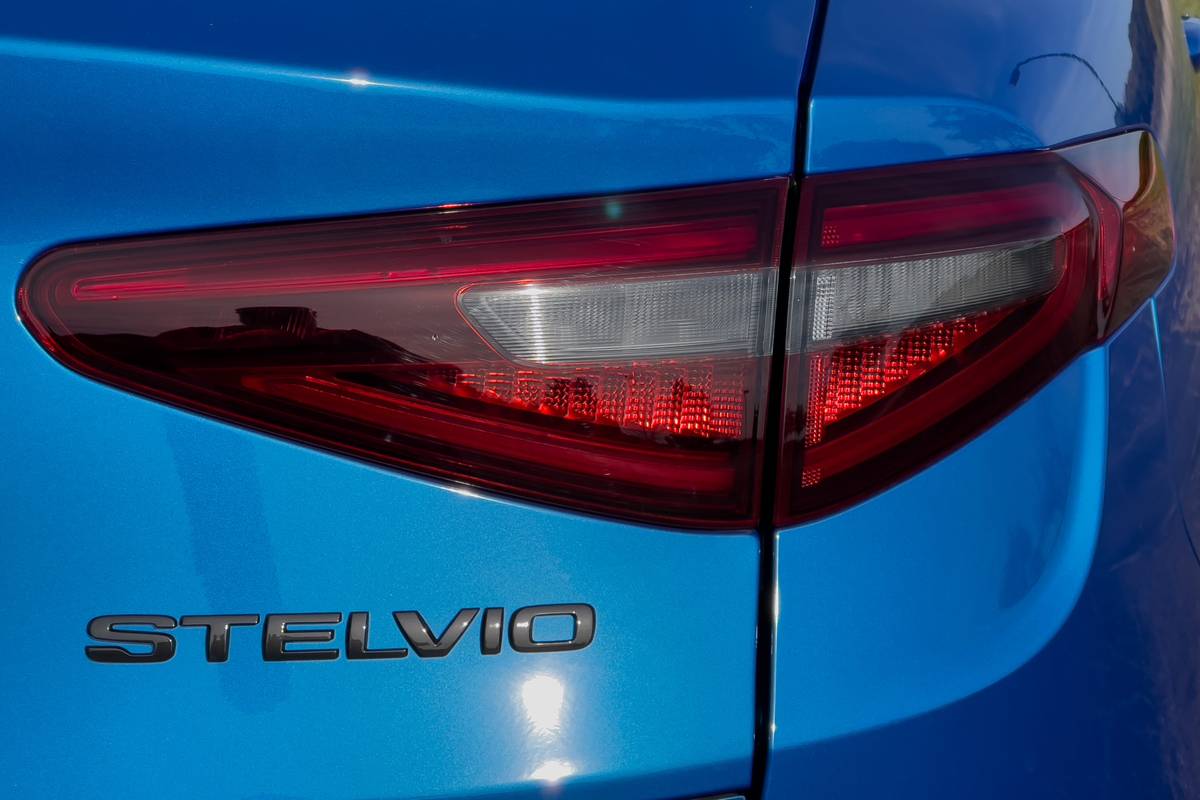 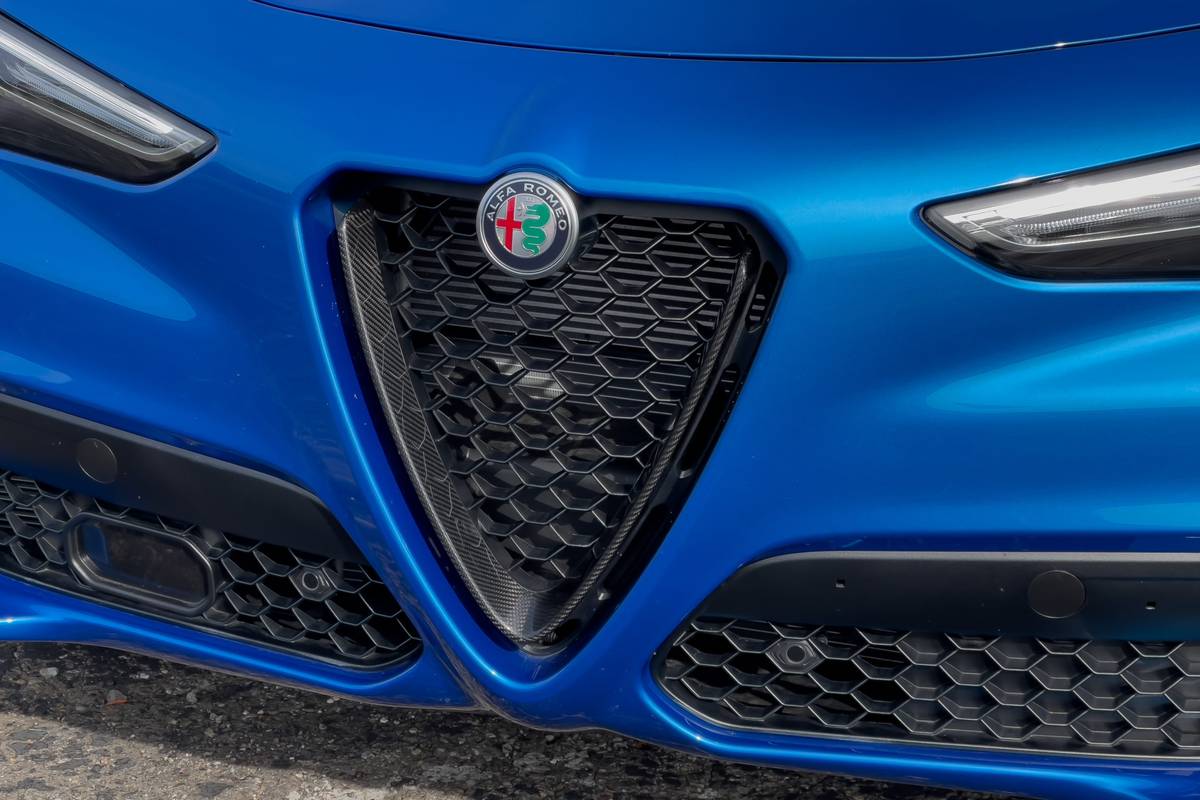 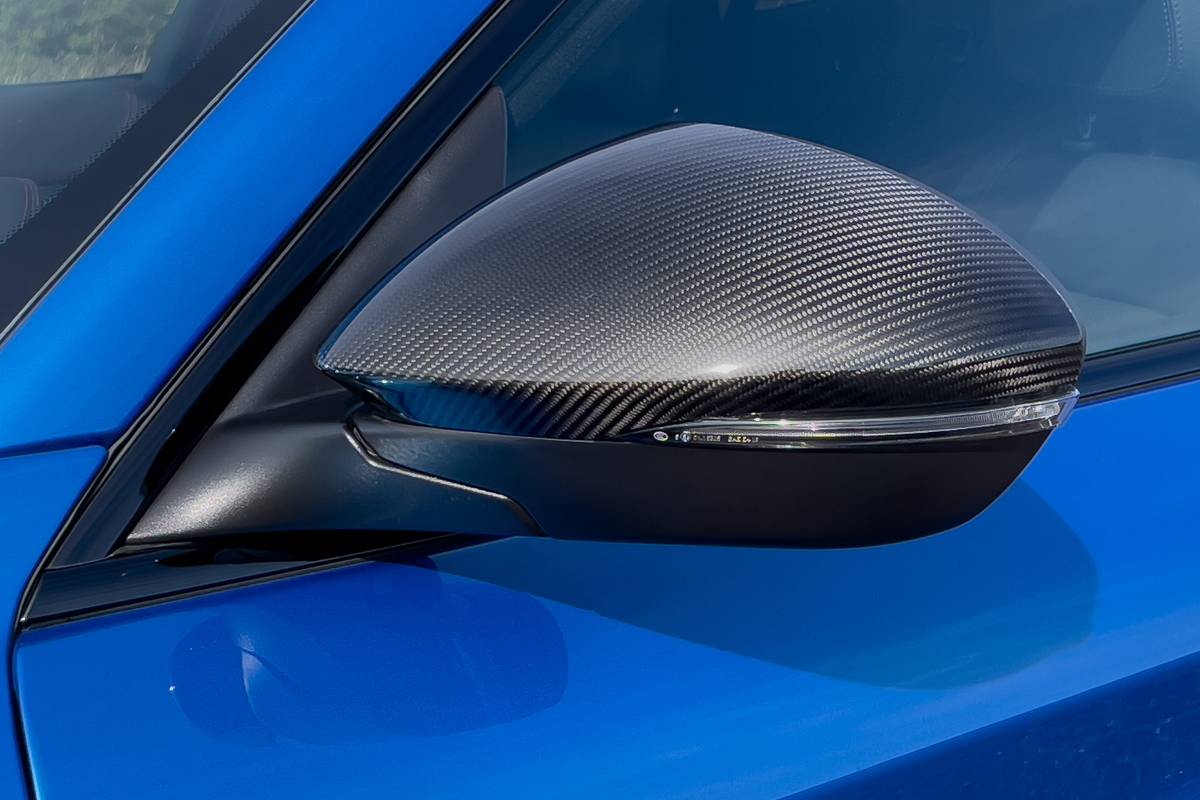 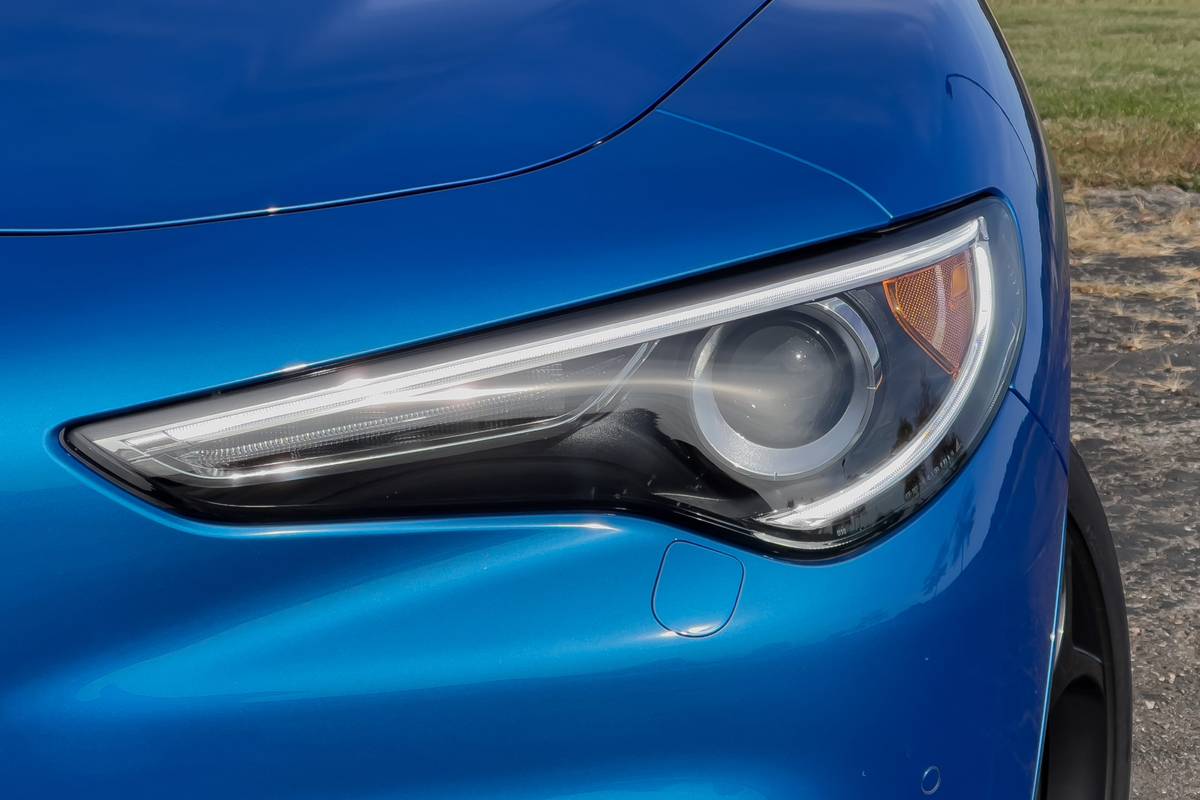 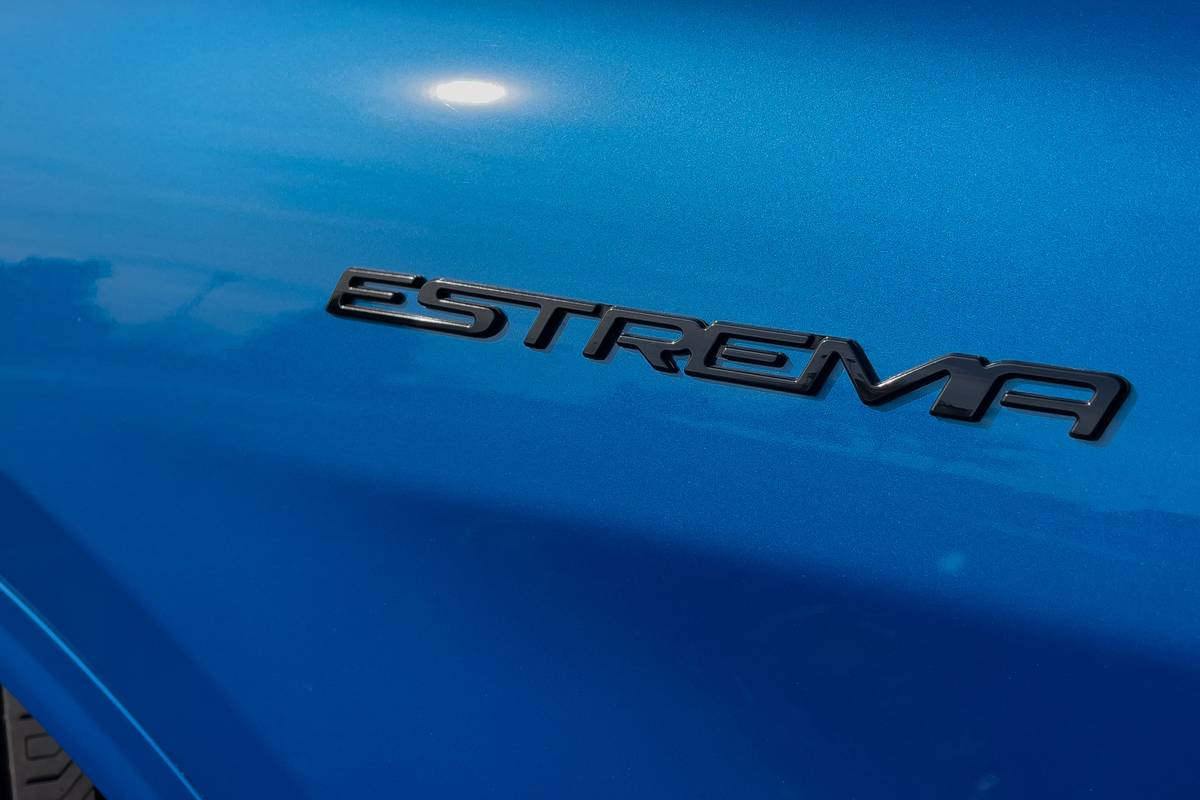 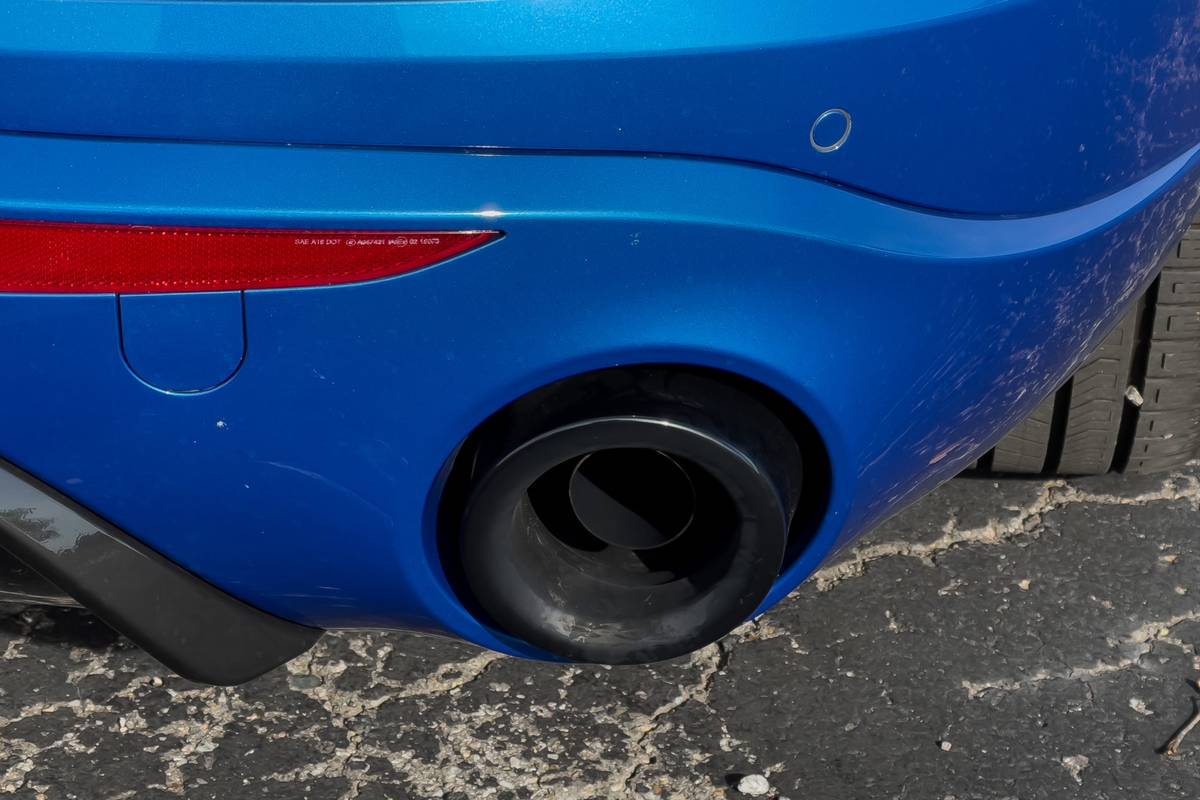 Despite the 2023 Stelvio being a 6-year-old design that’s seen no major updates, it still looks fantastic. Unlike other generic SUVs in this category, which could swap badges without most people noticing, the Stelvio features sculpted curves, muscular haunches, hood bulges and a unique Alfa Romeo triangular grille opening. The Estrema model adds blacked-out trim just about everywhere that isn’t painted one of the car’s four available paint colors; my test vehicle was a stunning Misano Blue Metallic, but red, white and black are also offered. Other design cues include 21-inch gloss-black wheels, gloss-black brake calipers with white Alfa Romeo script, and carbon-fiber veneers on the grille and mirror caps. There’s no faulting the way it looks; it’s a dynamite design that’s aged well. It’s still unique and easily identifiable as an Alfa Romeo.

… But Sometimes Style Needs an Update

The Stelvio’s nicely aging style sadly does not extend to the interior. While the materials quality of the Stelvio Estrema is acceptable, its design, packaging and technology are decidedly behind the times.

The Stelvio shares its platform with the Giulia compact luxury sedan, and you feel those compact roots when you step into it — which isn’t terribly easy. The B-pillars are strangely far forward, which makes getting into the driver’s seat something of a contortionist act. Oddly, the driver’s seat supposedly has an easy-in-and-out function, but it didn’t work on my test vehicle despite being selected in the central screen.

Once in the driver’s seat, you settle into a chair that is both covered in lovely leather and astonishingly uncomfortable. It sits too high for the surrounding controls and gauges, and that’s not just my opinion: Several passengers of various sizes tried out the vehicle and echoed those sentiments. Headroom is in short supply, as well, thanks to that seating position and a moonroof that eats up a couple of inches of overhead airspace front and back. 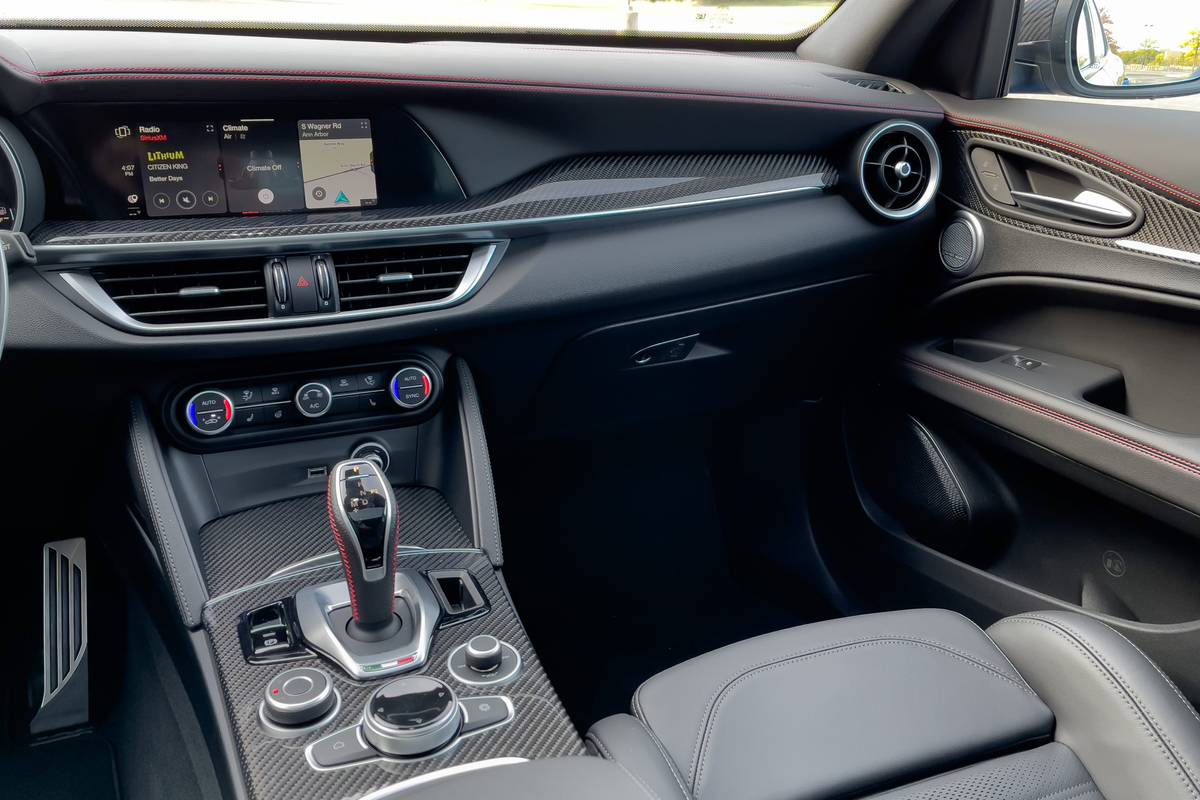 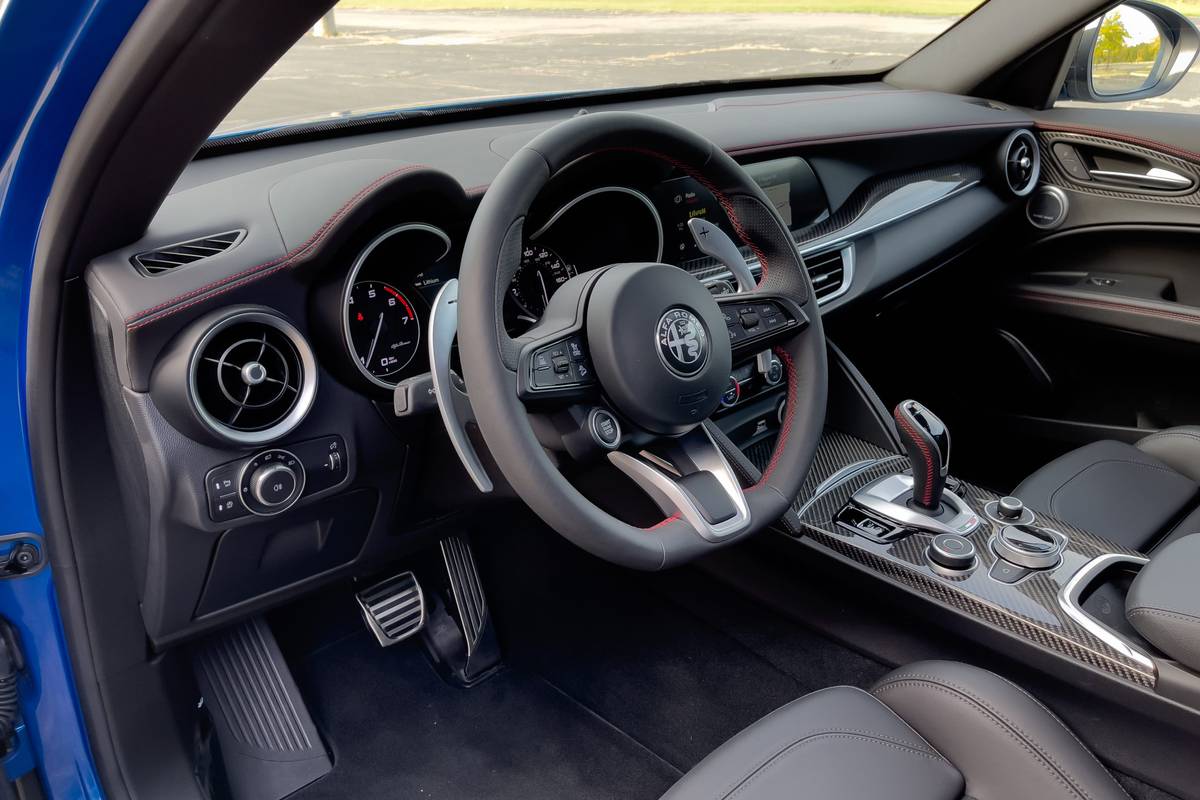 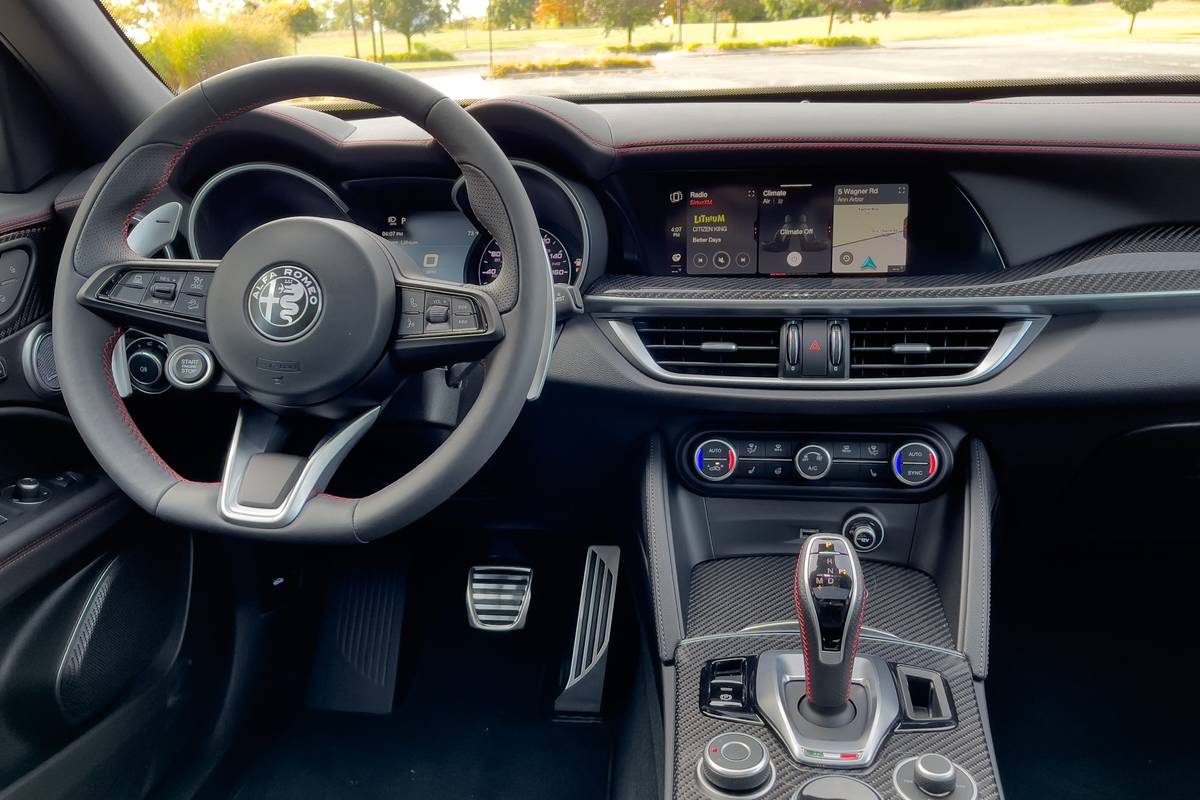 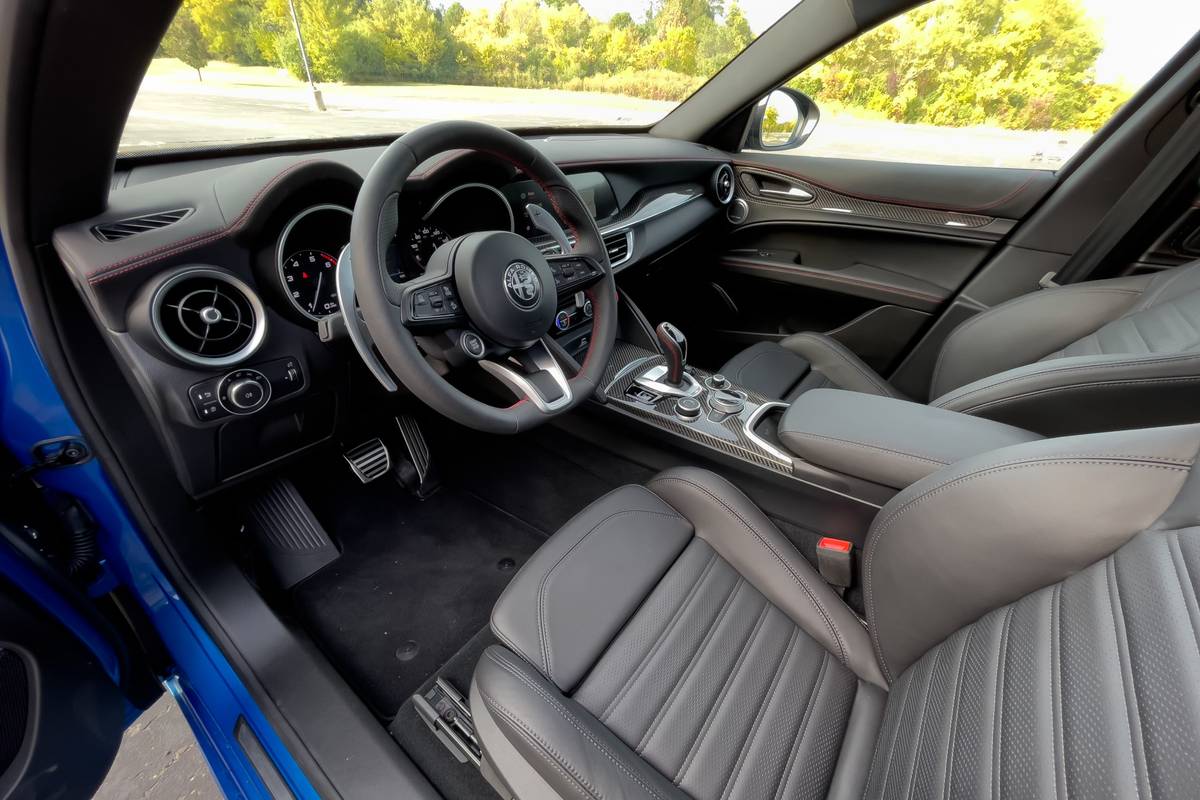 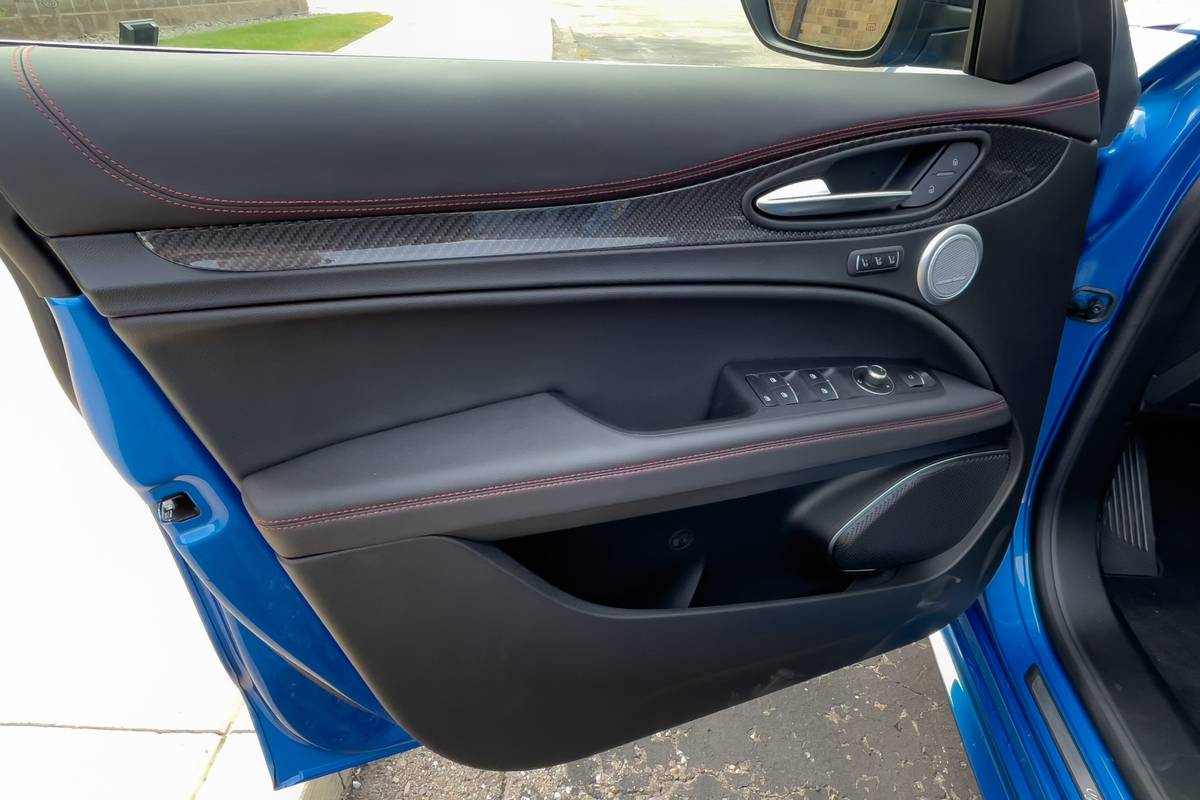 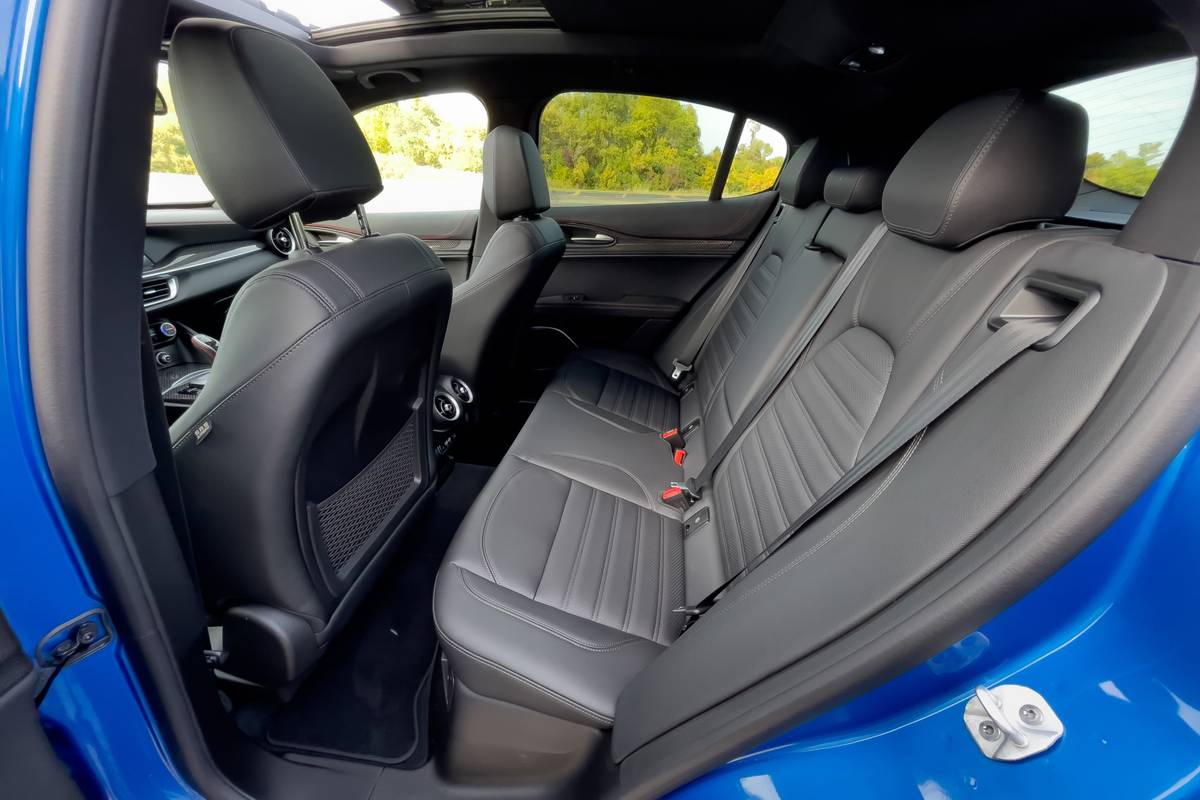 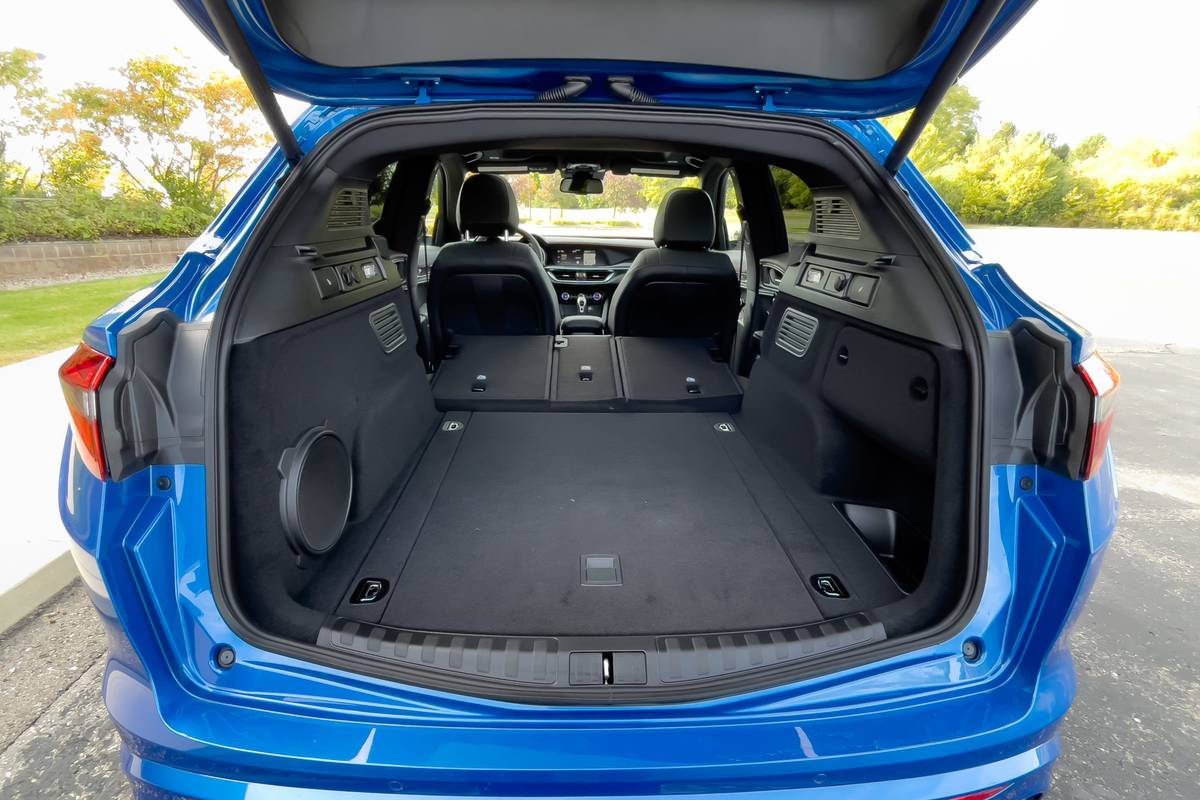 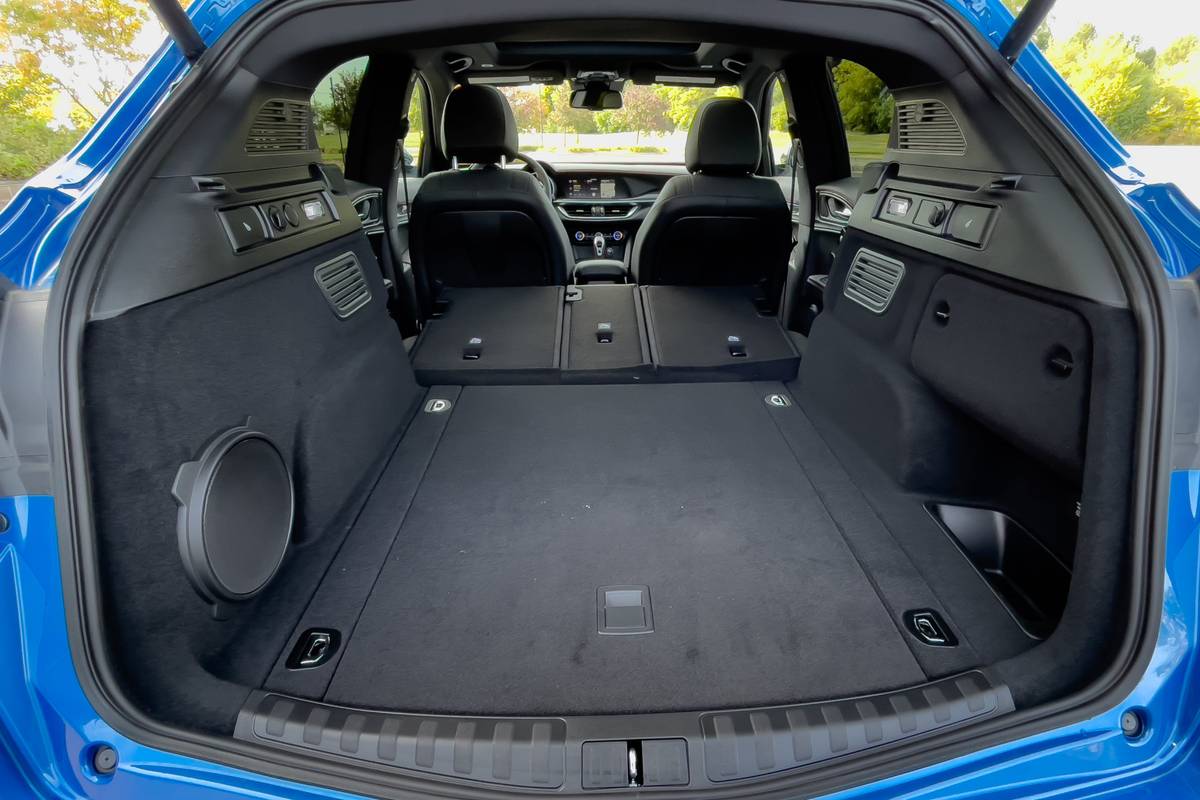 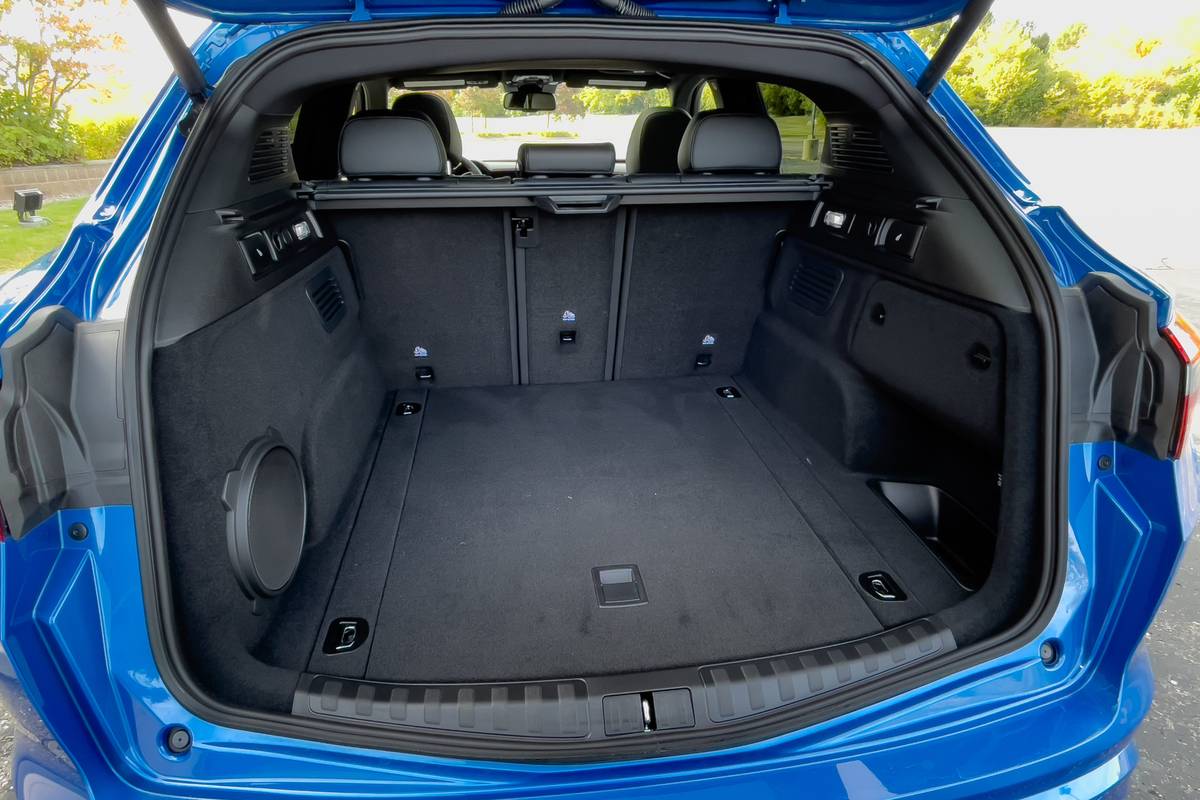 On top of things feeling tight up front, the backseat is practically useless for anyone but children. Legroom even with the front seats moved forward is almost comically absent. Part of that can be blamed on the floor hump for the driveshaft, but when it’s difficult to squish your toes under the front seats — and you’ll need to, as there’s simply nowhere else to put your feet — you know interior space needs to be improved. Cargo space, on the other hand, is acceptable, and the rear seatbacks fold easily thanks to levers in the cargo area.

All in all, it feels like the Stelvio just isn’t made for the U.S. market; it’s better suited to people who are 10%-20% smaller than the average American (which, let’s be honest, is most of the rest of the world). Of course, the Genesis GV70 has none of the Stelvio’s space and packaging issues, so I guess Alfa Romeo simply needs to rethink its engineering.

Atop the dashboard is an 8.8-inch touchscreen that’s surprisingly not running a reskinned version of Stellantis’ Uconnect multimedia system. It’s especially odd considering Maserati, the conglomerate’s even fancier Italian brand, does use it. I wish Alfa did, too, as the Stelvio’s multimedia system is laggy and slow, and it doesn’t offer easy reconfigurability or the plethora of functions that Uconnect does. The screen is a decent size, but with a lot of competitors moving to even larger screens, the Alfa’s looks a bit puny. At least it’s well integrated with the dashboard, though; it doesn’t look like someone has stapled a massive iPad to the instrument panel.

The rest of the Stelvio’s controls are thankfully still honest-to-God buttons and switches, which we almost universally prefer over cramming everything into a soulless touchscreen. The start button on the steering wheel is a nice touch, and the rotary selectors on the center console are big and chunky, which makes them easy to spot and use. The steering wheel is grippy and thick, and it feels good in your hands. No complaints about the gauges, either — the Stelvio hasn’t switched to a digital instrument panel, so those slick-looking round dials that are easy to decipher are still there. 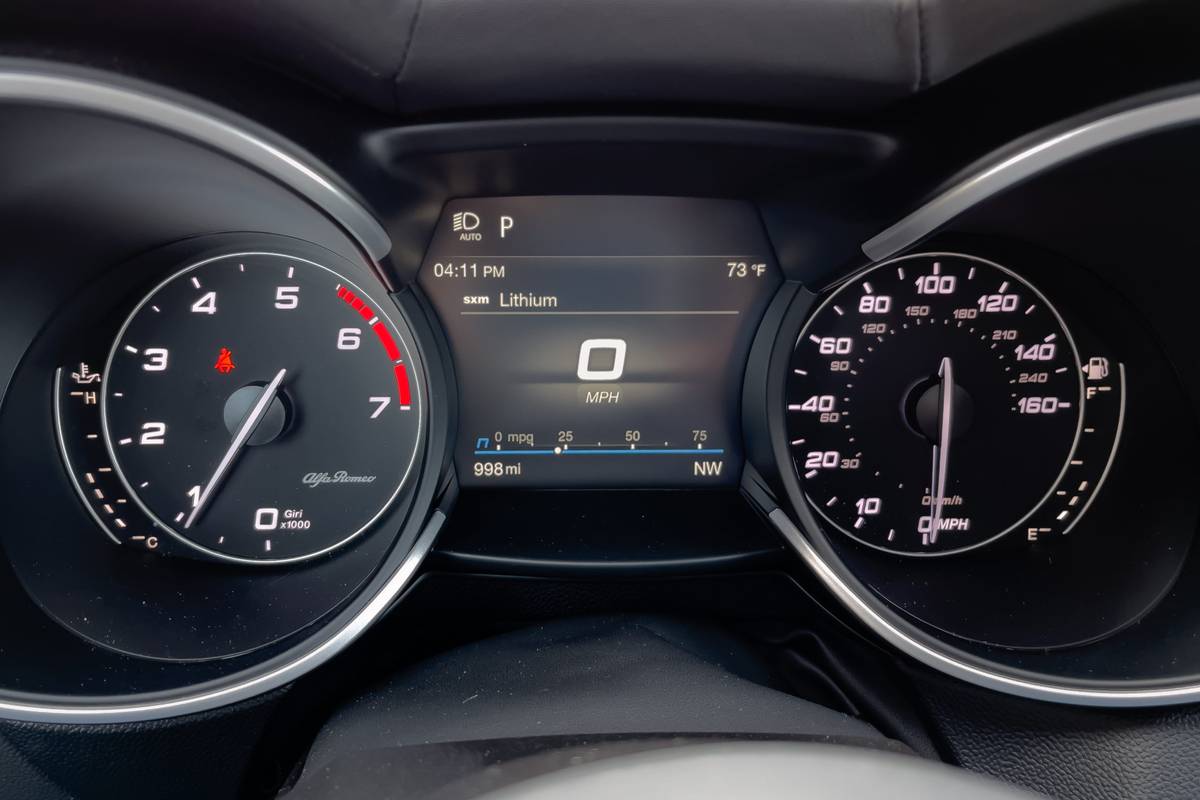 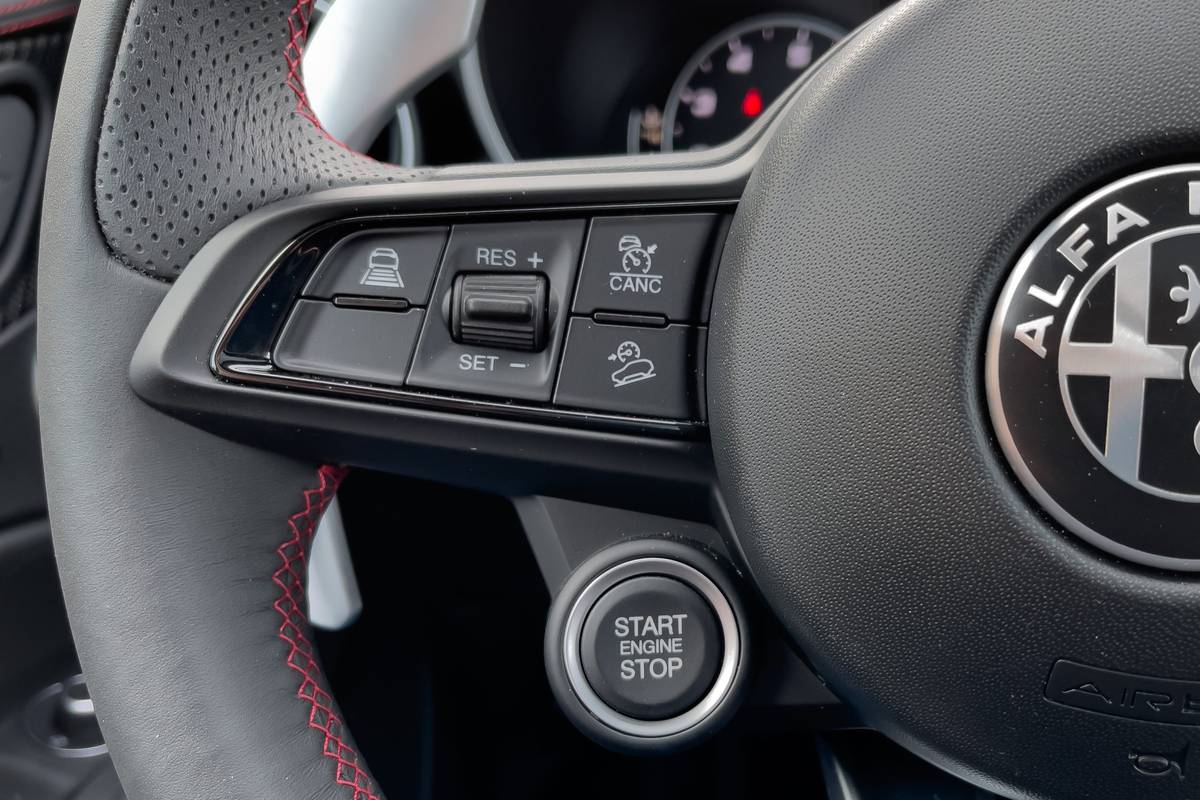 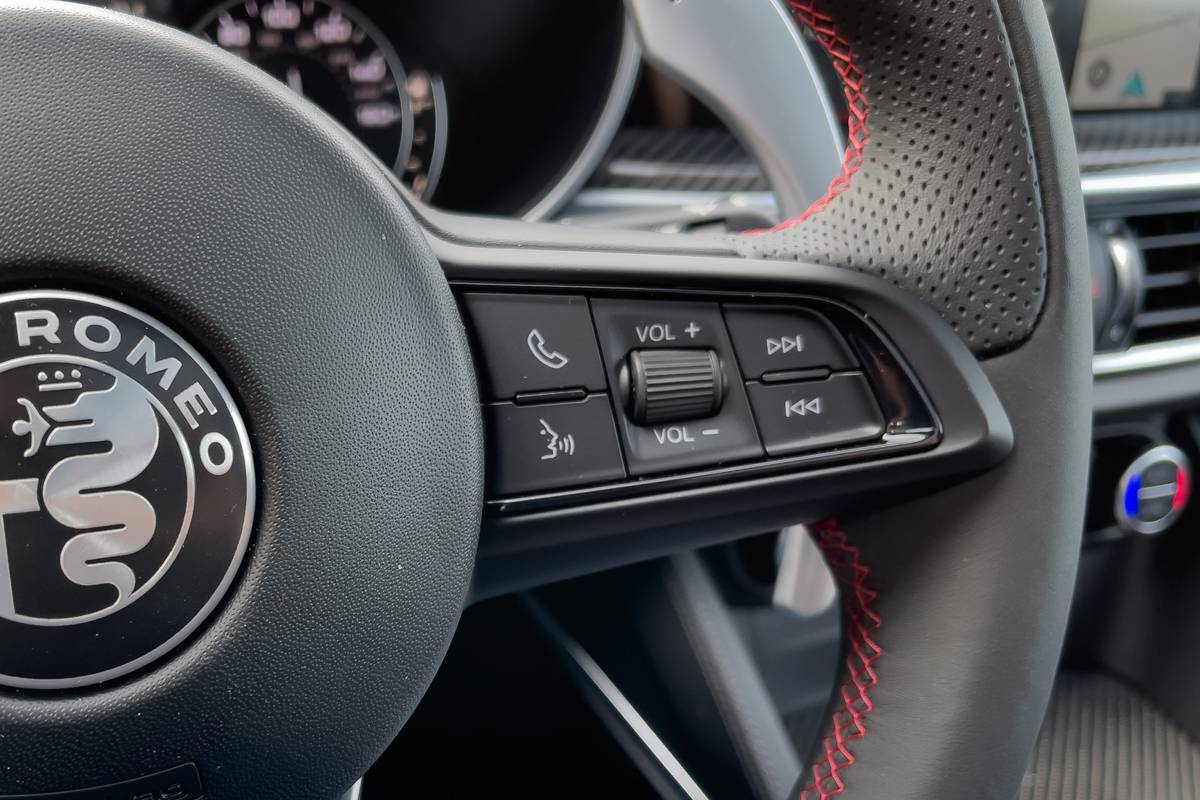 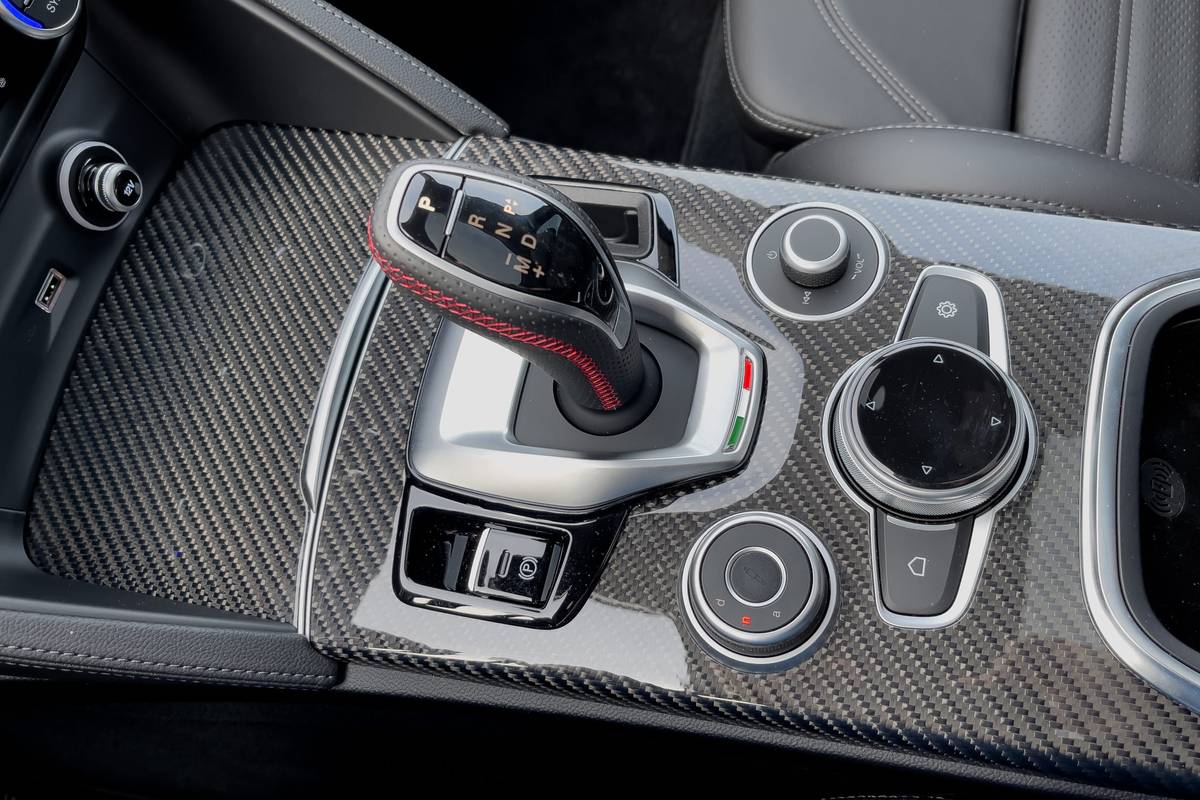 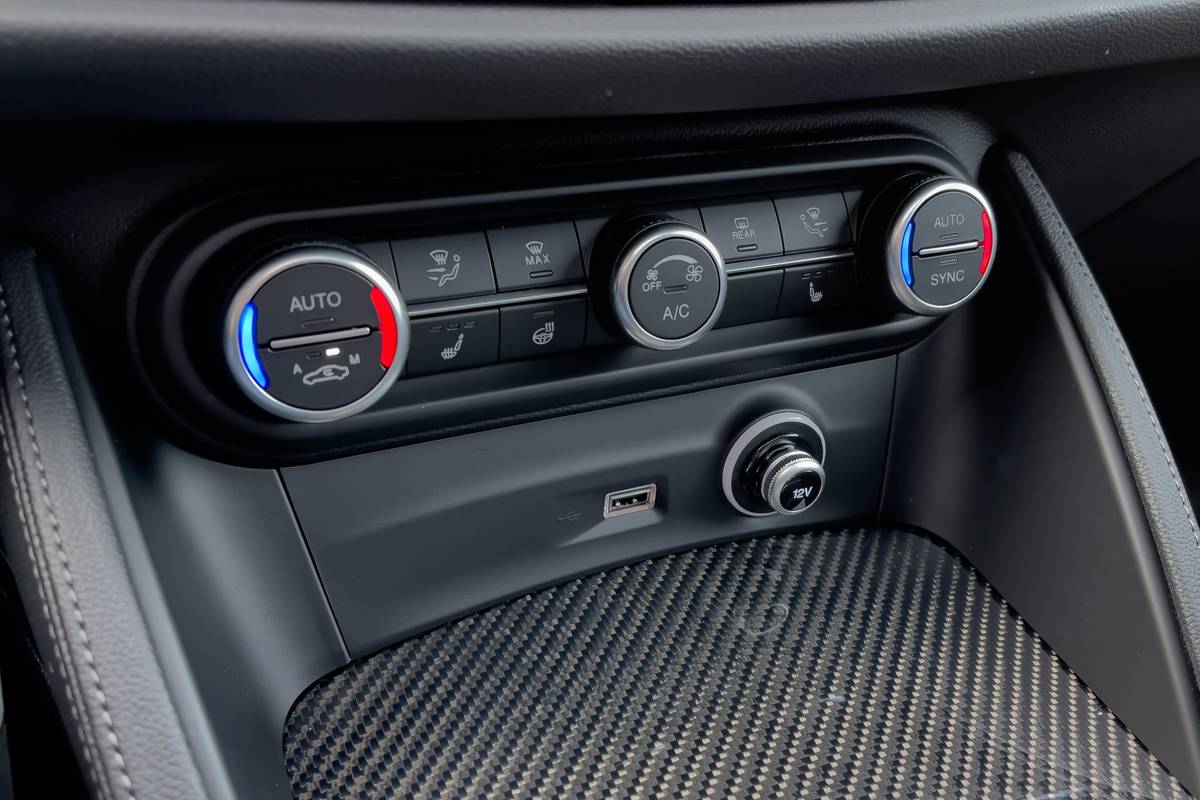 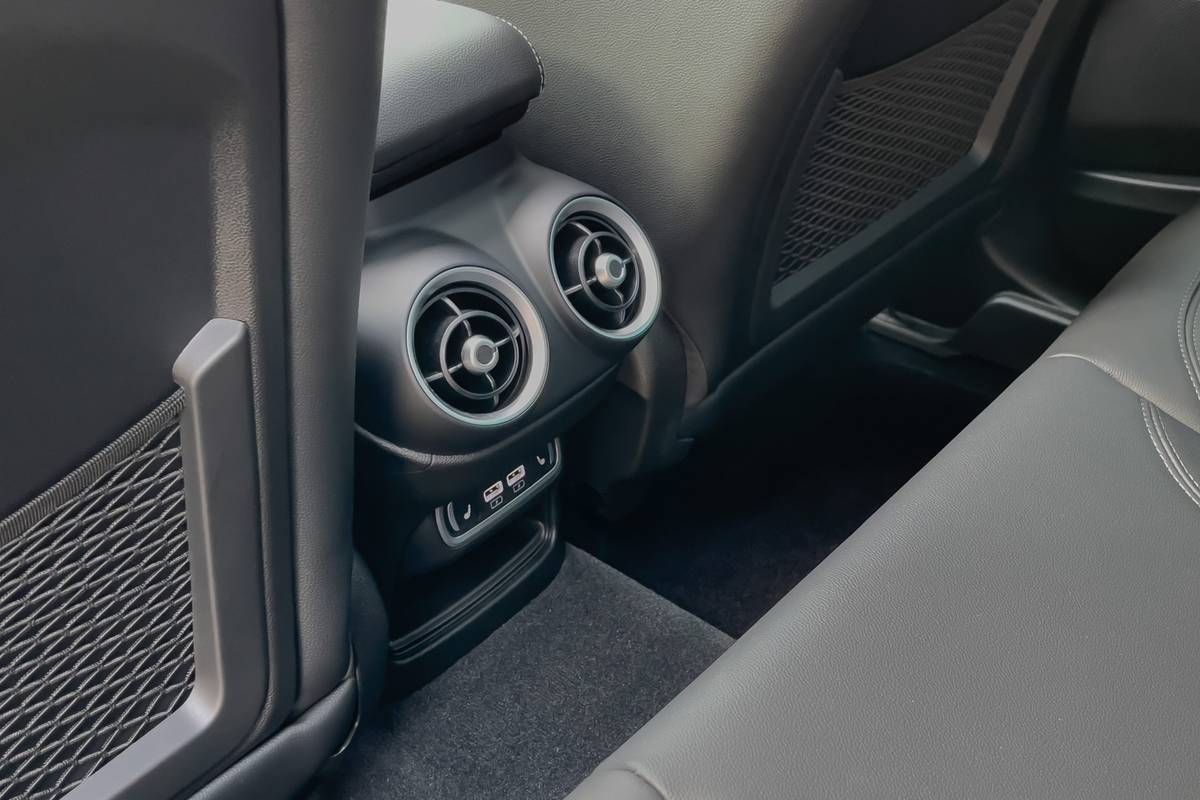 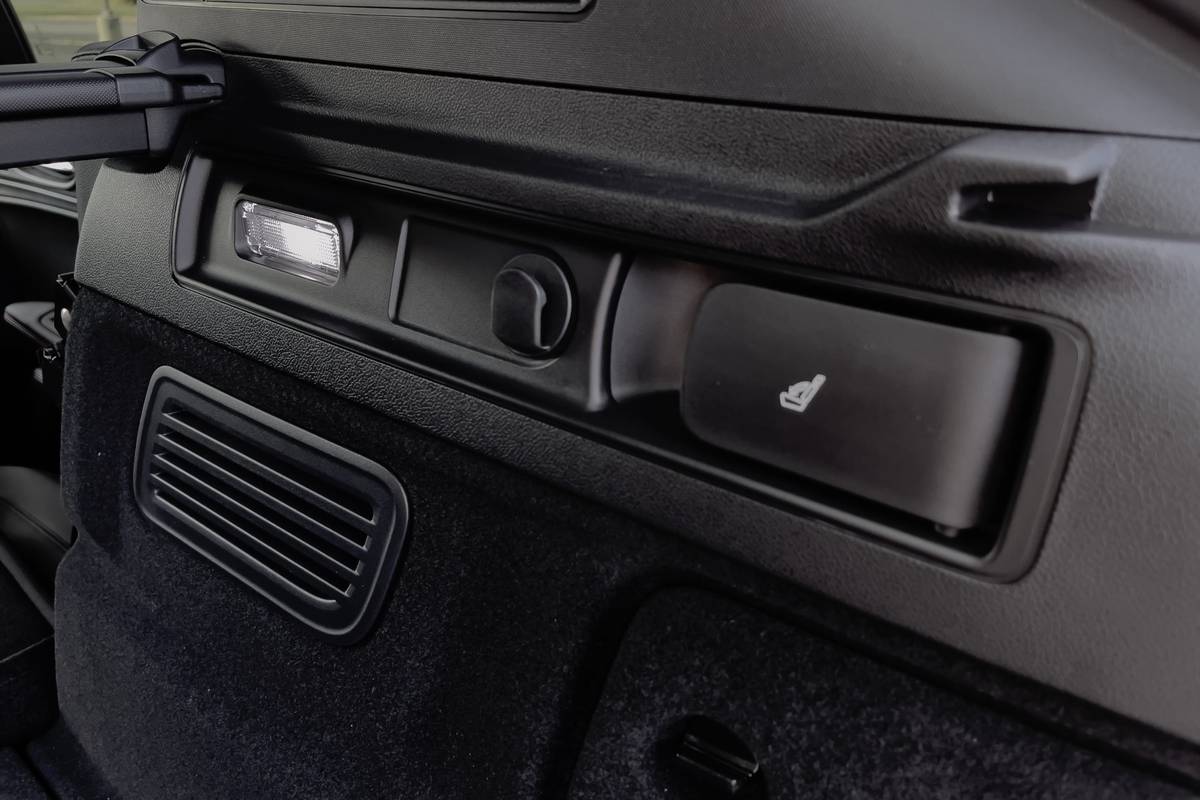 Mixed Performance on the Street

Once you’ve wedged yourself into the driver’s seat and are on the road, the Stelvio Estrema’s performance is something of a mixed bag. It’s meant to be the driver’s choice in the compact luxury SUV class, that much is obvious, and it is … somewhat.

I found no fault with the ride-and-handling mix. Alfa engineers have made a stellar effort, with steering that has plenty of feel and a ratio that makes for quick and responsive changes in direction. Ride quality is also excellent, which is surprising given the car’s huge 21-inch wheels wrapped in low-profile all-season tires. I also have praise for the brakes, which are firm, progressive and confidence-inspiring. The Estrema adds a few things to make all this magic happen: All-wheel drive is standard, as are an electronic adaptive suspension and a limited-slip differential, both cribbed from the Stelvio Quadrifoglio. The electronic suspension makes a difference: Switch to Dynamic on the drive mode selector and you feel the ride lose much of its compliant nature. It’s better to leave it in Normal, which provides a much better balance.

What holds the Stelvio back from greatness, though, is its powertrain, which is oddly laggy and slow to downshift. The engine has plenty of power, and when in Dynamic mode, it’s crisp and quick to respond — but that mode also makes the transmission hold gears before upshifting longer than is comfortable for most around-town driving duties. It makes Dynamic mode more of a track- and back-roads-only option.

In Normal mode, the eight-speed automatic holds the Stelvio back by being slow to downshift even when you really put your foot down on the gas pedal. This makes the SUV bog down when you’re trying to accelerate. It’s a frustrating trait, and it ruins the Stelvio’s sporting intentions. It happens both when accelerating moderately out of corners and when pulling into traffic, which is a hair-raising experience. It feels like the gas pedal is connected to the engine and transmission via rubber bands; nothing happens in Normal mode until half a tick after you want it to, but keeping the Stelvio in Dynamic mode is unacceptable because it’s too tightly wound. It should be a knockout performance-oriented SUV with Italian-style driving characteristics, but the Stelvio Estrema’s performance disappoints thanks to these frustrating powertrain quirks.

The Estrema trim is loaded, giving you just a choice of colors and an optional Active Assist Plus Package that brings a host of electronic safety systems, including active blind spot assist, driver attention alert, intelligent speed control, lane keep assist, traffic jam assist and more. My test car stickered at $63,175 (prices include destination), making it the most expensive Stelvio you can get short of stepping up to the Quadrifoglio, which starts at $87,670. Given there are so many good vehicles in this class with a lot more going for them beyond style and fashion, the Stelvio needs a thorough refresh if it wants to compete with the best performance models out there. A Mercedes-AMG GLC43 would trounce the Stelvio Estrema in both the performance and technology departments, as would an Audi SQ5, and both of them are priced similarly to the Stelvio Estrema. I look forward to seeing what a Stelvio redesign would bring. It’s time for one.