The verdict: The new 2023 Nissan Z’s updates transform the two-seater into a modern, fun-to-drive sports car that still honors the nameplate’s rich heritage.

Versus the competition: Starting at $41,015, the 2023 Z’s base price significantly undercuts the six-cylinder Toyota Supra’s, and it also feels like a more cohesive sports car from the driver’s seat.

The new Nissan Z shares its platform with the previous 370Z that was last offered for the 2020 model year, but its exterior styling, interior design and powertrain are all new. At Nissan’s invitation, we traveled to Las Vegas to get behind the wheel of the Z for the first time, spending a day experiencing its straight-line acceleration, road-course handling and street-driving manners (Cars.com pays for its own airfare and lodging when attending manufacturer-sponsored events).

Familiar Z-car styling attributes include a long hood and short rear deck, but rather than take design cues from a single Z-car generation, the 2023 Z’s exterior blends styling elements from different eras.

The large rectangular grille and LED daytime running lights recall the first generation that arrived in the U.S. in 1969, but as you move to the rear, the design takes after a more recent time, with taillights reminiscent of those on the ‘90s-era 300ZX. You don’t often see this kind of design mashup in new cars, and it might be a bit jarring to some Z-car fans, but the overall look is sleek, sporty and more modern than retro. 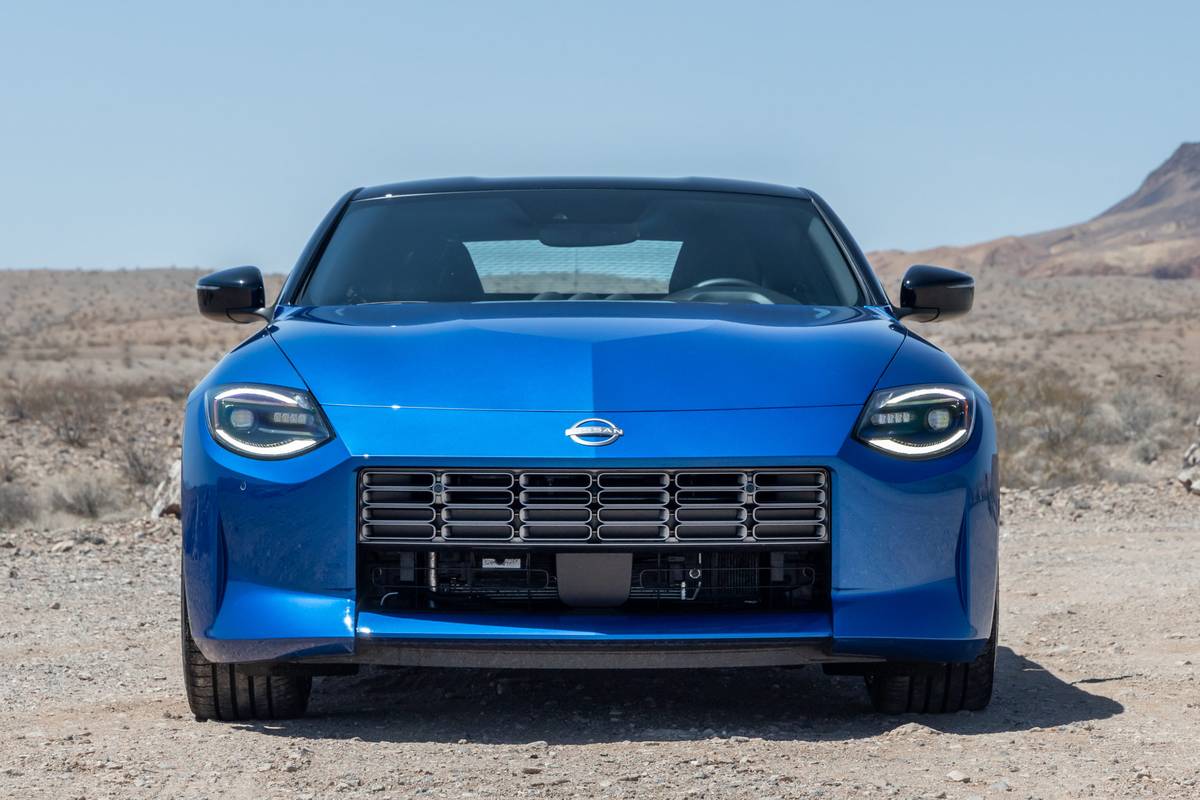 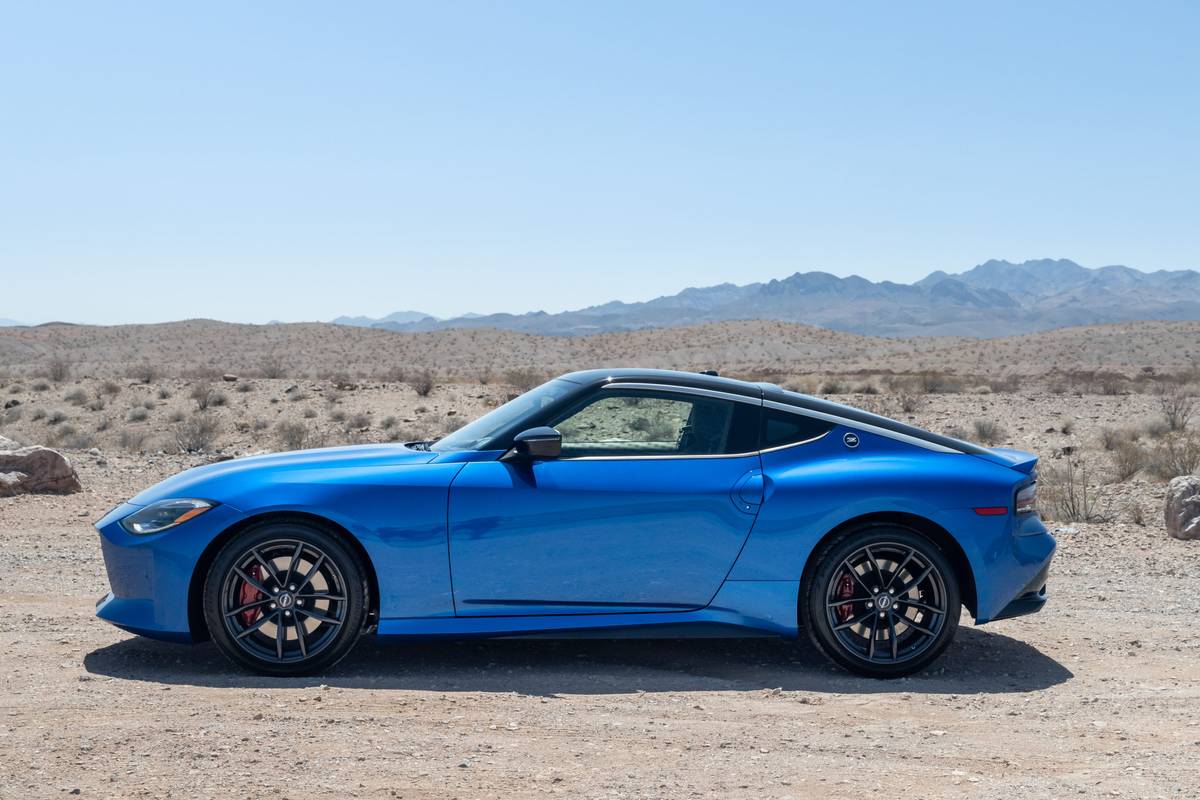 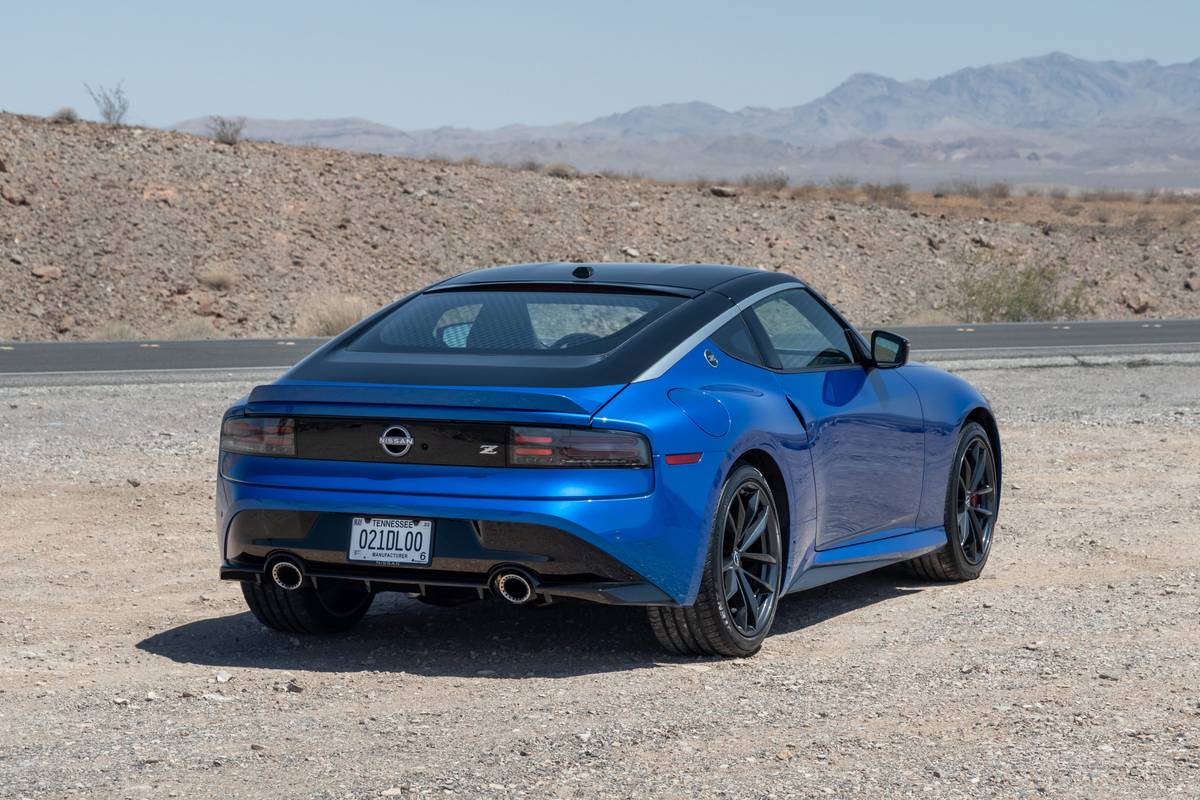 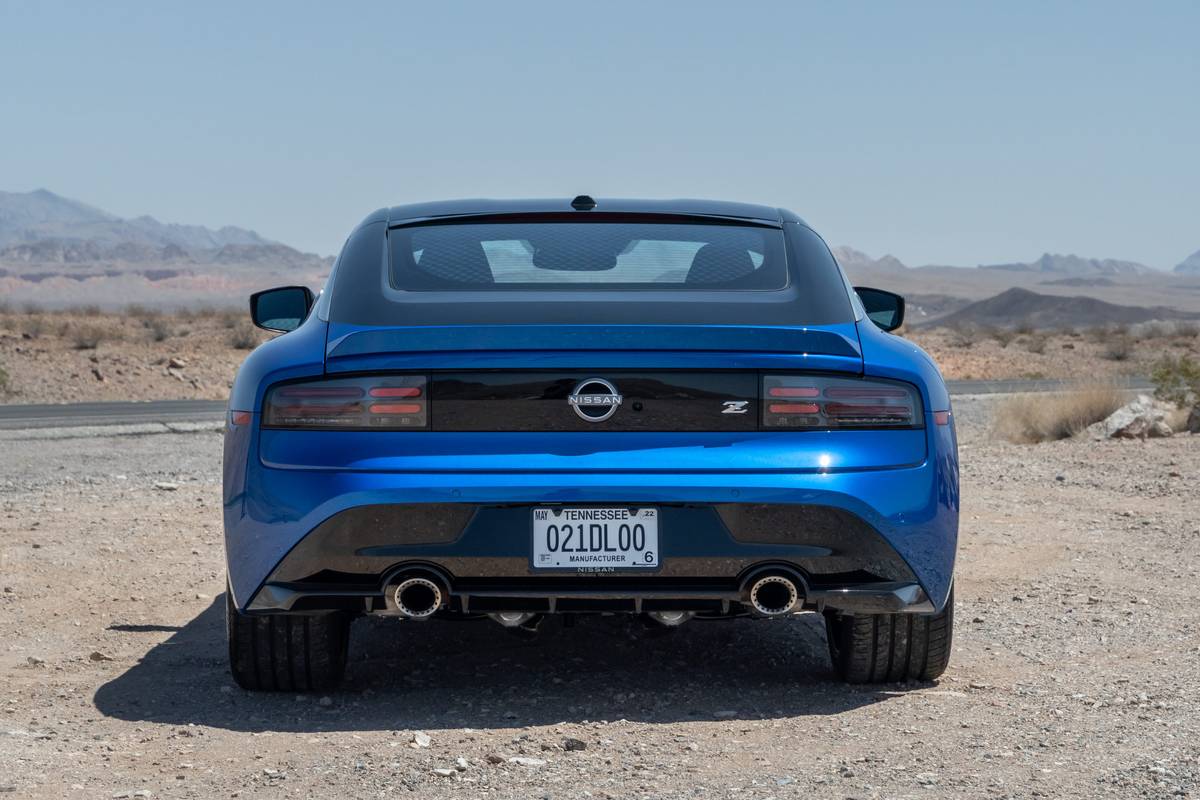 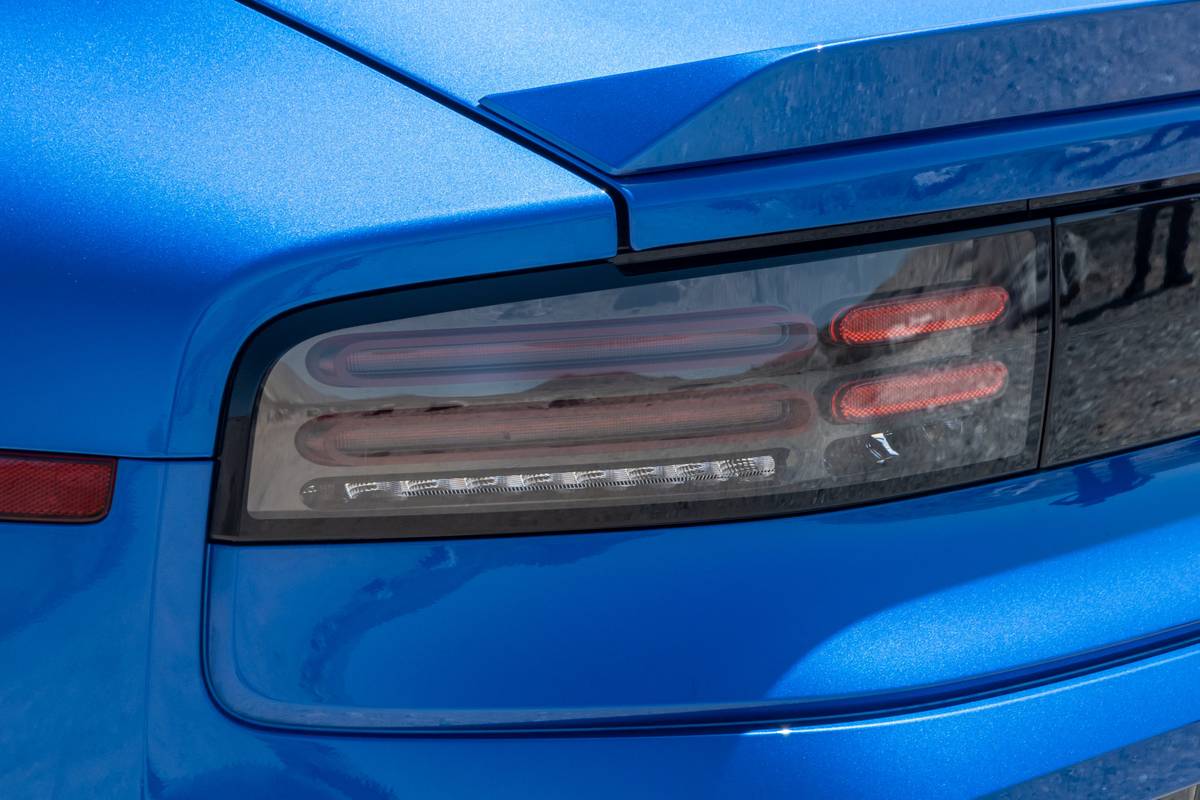 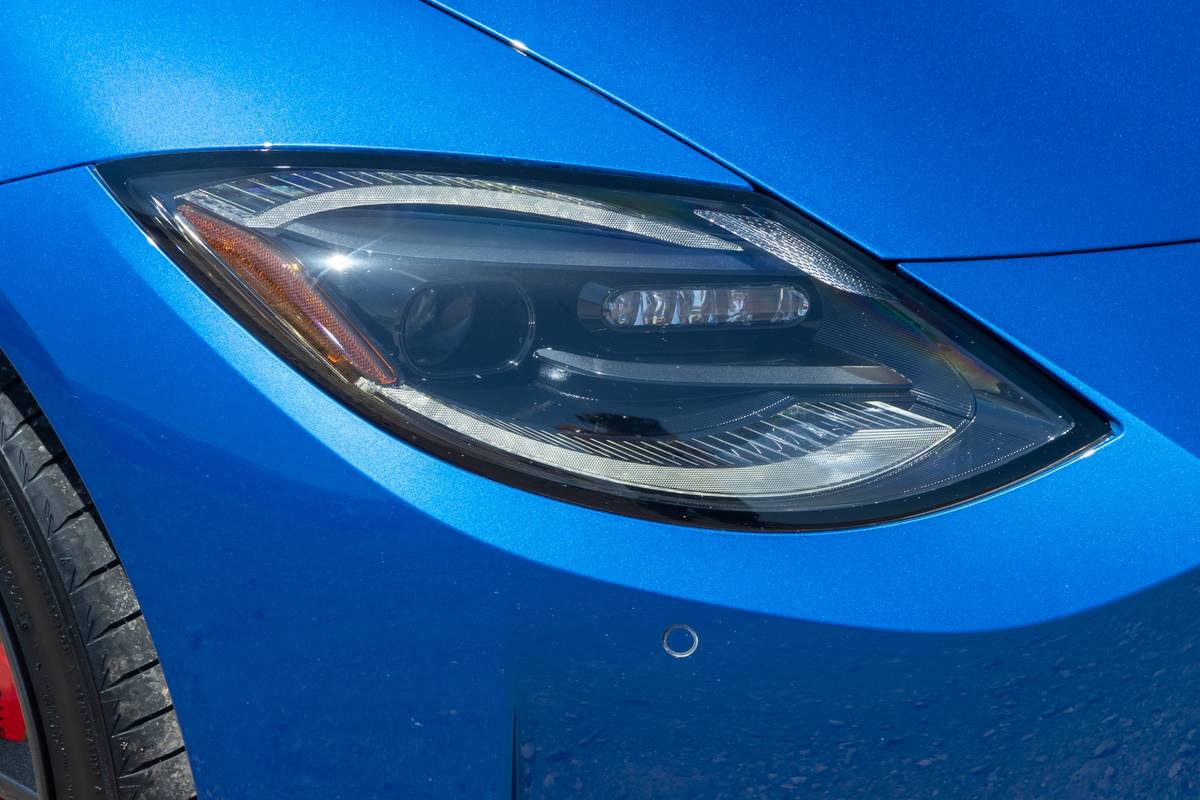 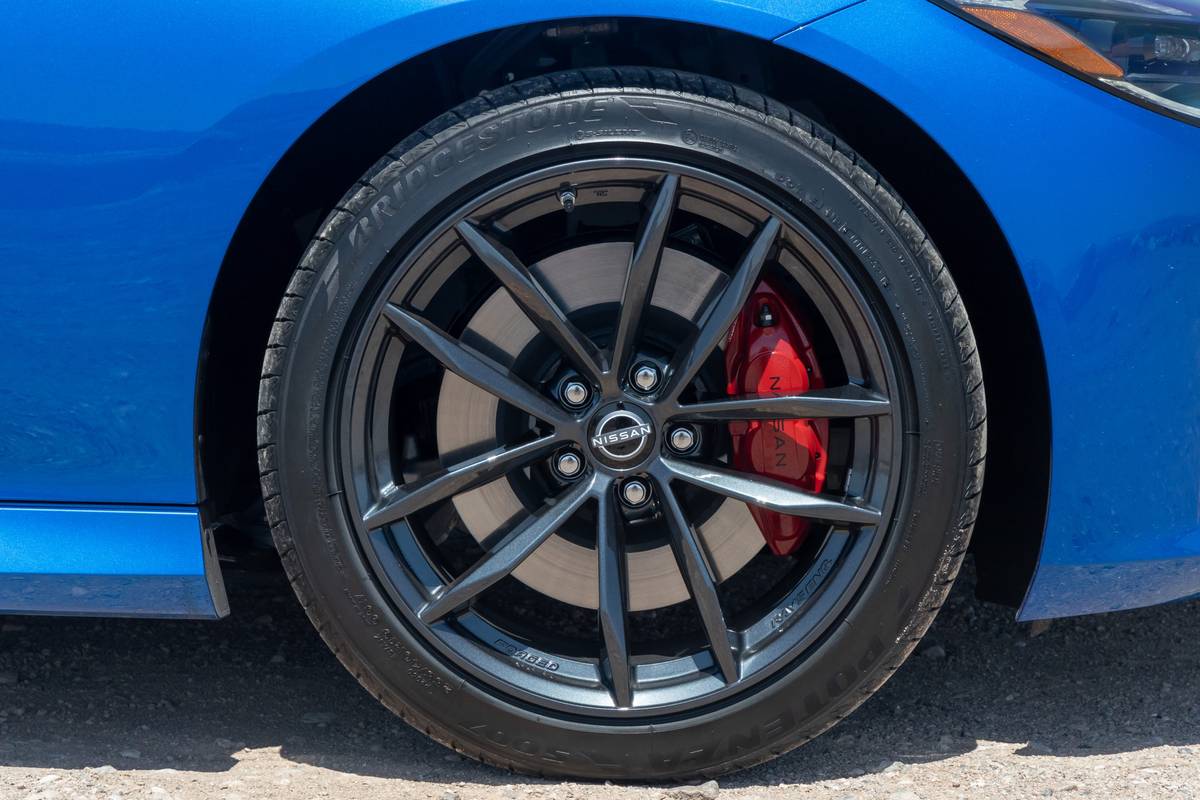 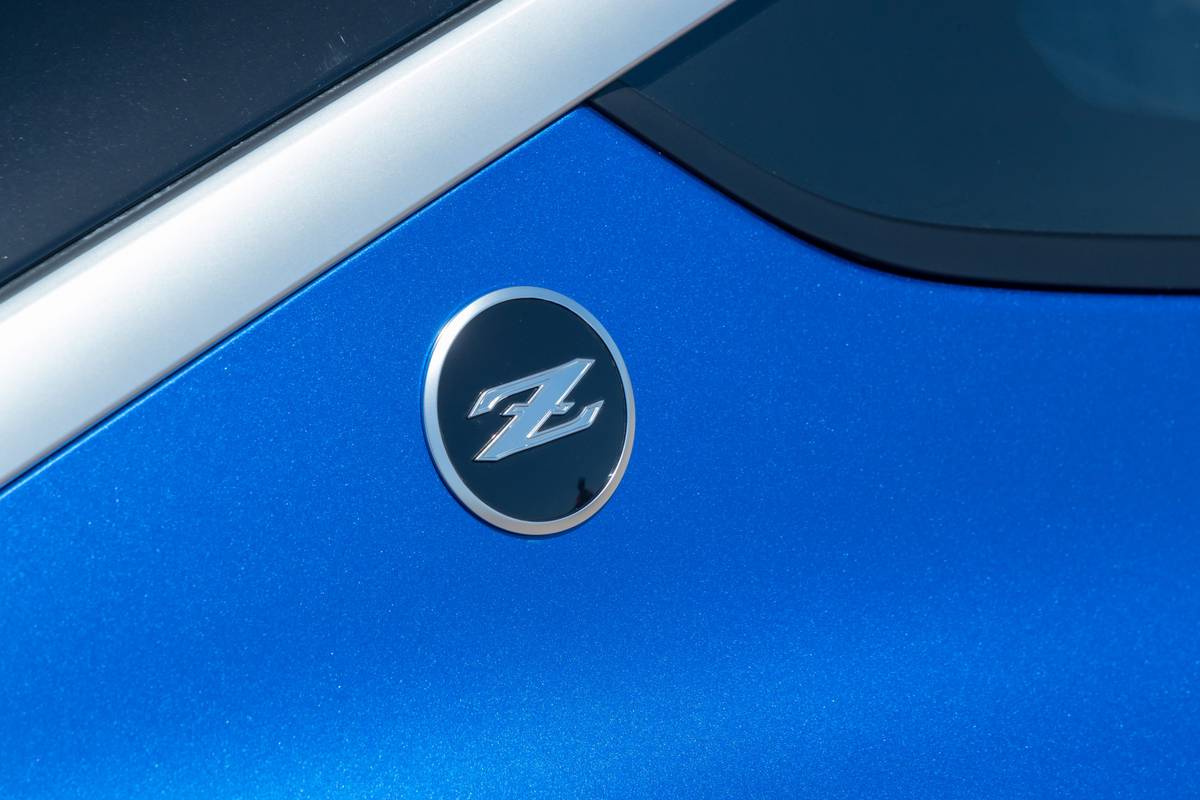 Power to the People

Perhaps the most consequential change is under the car’s long hood. Gone is the 370Z’s naturally aspirated 3.7-liter V-6 engine, replaced instead with the twin-turbocharged 3.0-liter V-6 from Infiniti’s line of Red Sport models. (Infiniti is Nissan’s luxury brand.) The new engine makes 400 horsepower and 350 pounds-feet of torque, which is 68 hp and 80 pounds-feet of torque more than the 370Z’s V-6 in a car that weighs roughly the same at around 3,500 pounds.

The new engine transforms the Z driving experience. The twin-turbo V-6 is smooth-revving and much more refined than the comparatively coarse 3.7-liter V-6, and the engine’s more accessible peak torque — it’s available from 1,600 to 5,200 rpm versus 5,200 rpm for the old V-6 — makes the car much more responsive at low and mid-range engine speeds. It also pulls harder when accelerating flat out.

The Z’s new available nine-speed automatic transmission is another reminder of how good performance automatics have become, and it’s also the most effective way to extract maximum performance from the car. The automatic-equipped Z can’t, however, match the level of connection between driver and car that models with the six-speed manual offer.

Under hard acceleration, the automatic rips off upshifts quicker than you can make with the car’s manual, and when hustling the Z around the road course, it was in optimal gears. The automatic also includes an easy-to-use launch control feature that, when activated, sends the Z hurtling forward from a stop as the rear tires scramble for grip. Driver-initiated upshifts with the shift paddles weren’t as fast as I like, but if you let the transmission do its thing and decide when to change gears, it performs well.

The automatic is the transmission to get if you’re looking for ultimate performance, but if you want the most engaging driving experience, the manual can’t be beat. The shifter has short throws and a pleasing mechanical feel, and the light clutch pedal won’t tire your left leg. Overall, it’s a very forgiving setup that makes for easy start-offs. Performance trim levels with the manual have a launch assist control system for smooth takeoffs and Nissan’s SynchroRev Match feature, which automatically aligns engine rpm when shifting.

On the Street and Track

The previous 370Z had hydraulically assisted steering that lent the steering wheel a heavier feel, but the new Z gets electrically assisted power steering. It steers with a light touch, and steering response is direct and precise. On-center feel and straight-line stability are good, too, which makes for relaxed cruising. 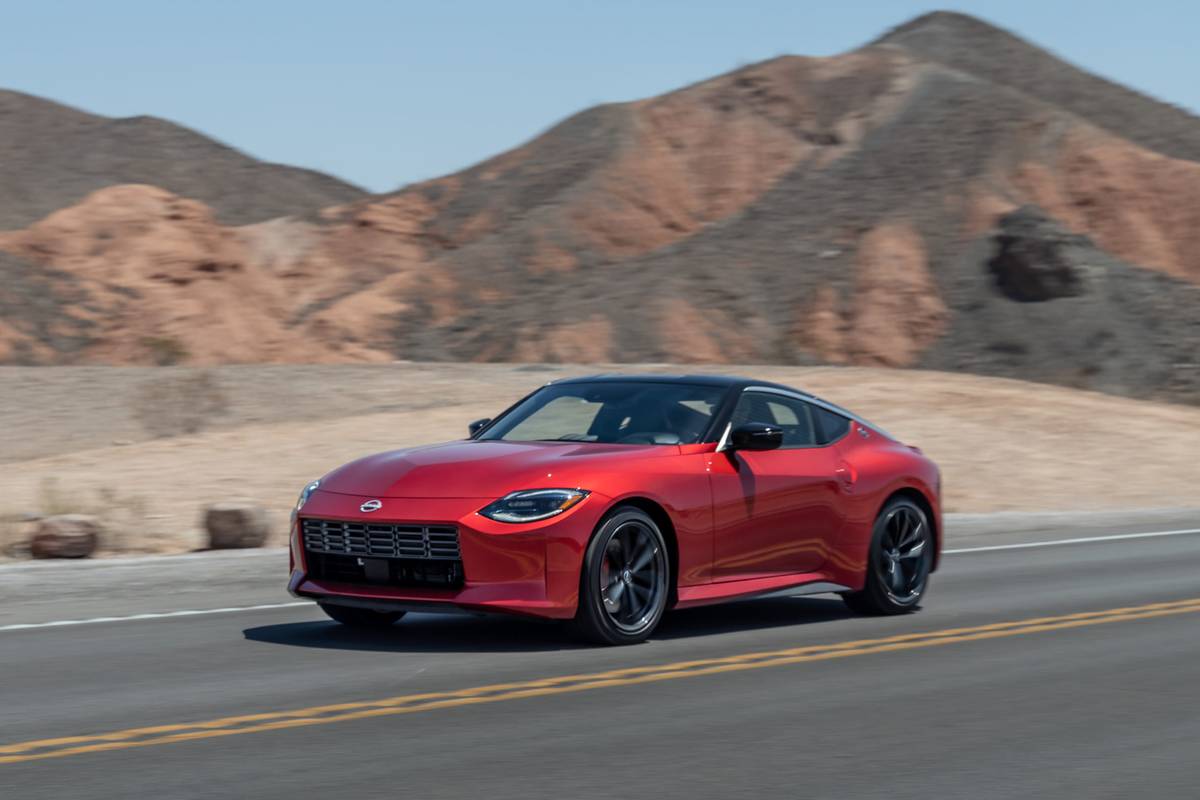 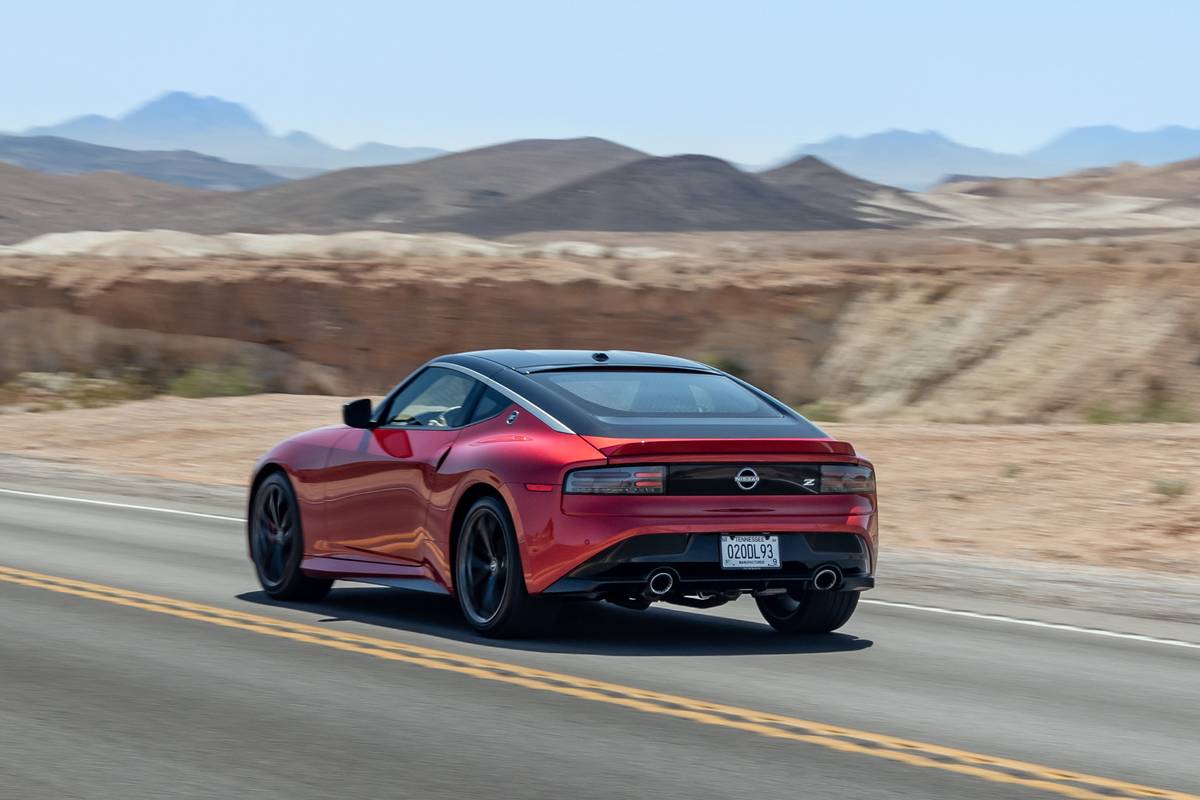 The front suspension uses a double-wishbone design, while the rear has a multilink setup. There are new monotube shocks, and the Performance trim cars we took on the street and track get larger 19-inch forged-alloy wheels and staggered tires instead of the base Sport trim’s 18-inch alloy wheels and square tire setup.

The Z is a firm-riding car that lets you know when the pavement is anything less than perfect, but the mostly smooth roads of southern Nevada prevented us from getting a clear picture of how that taut ride quality will translate to the pockmarked and potholed roads we regularly see near Cars.com’s Chicago headquarters. We’ll know more once we test one closer to home, but the firm tuning made for a fun-driving car that felt completely at home on the winding desert roads outside Las Vegas. Though the roads we traveled were pothole-free, they weren’t perfectly smooth, and the result was considerable road noise in the cabin at moderate speeds.

Nissan made some lead-follow laps available on a road course at the Las Vegas Motor Speedway complex, and it was just as entertaining in this setting. There’s noticeable but not excessive body roll when taking tight corners quickly, and the car stays on the line you set. The capability of the automatic-transmission Z is apparent here, too, as the car adds speed quickly. Other than upgraded brake pads, Nissan said the cars on the road course were stock.

The cabin gets an all-new design that incorporates more tech features. Sport trims come with an 8-inch dashboard touchscreen featuring Apple CarPlay and Android Auto smartphone connectivity, while the Performance variant has a larger 9-inch screen and adds navigation. Both trims have a 12.3-inch digital instrument panel that replaces the previous car’s analog instruments. Some design elements have carried over, though, like the three-gauge pod atop the dashboard and the circular air vents in the doors. 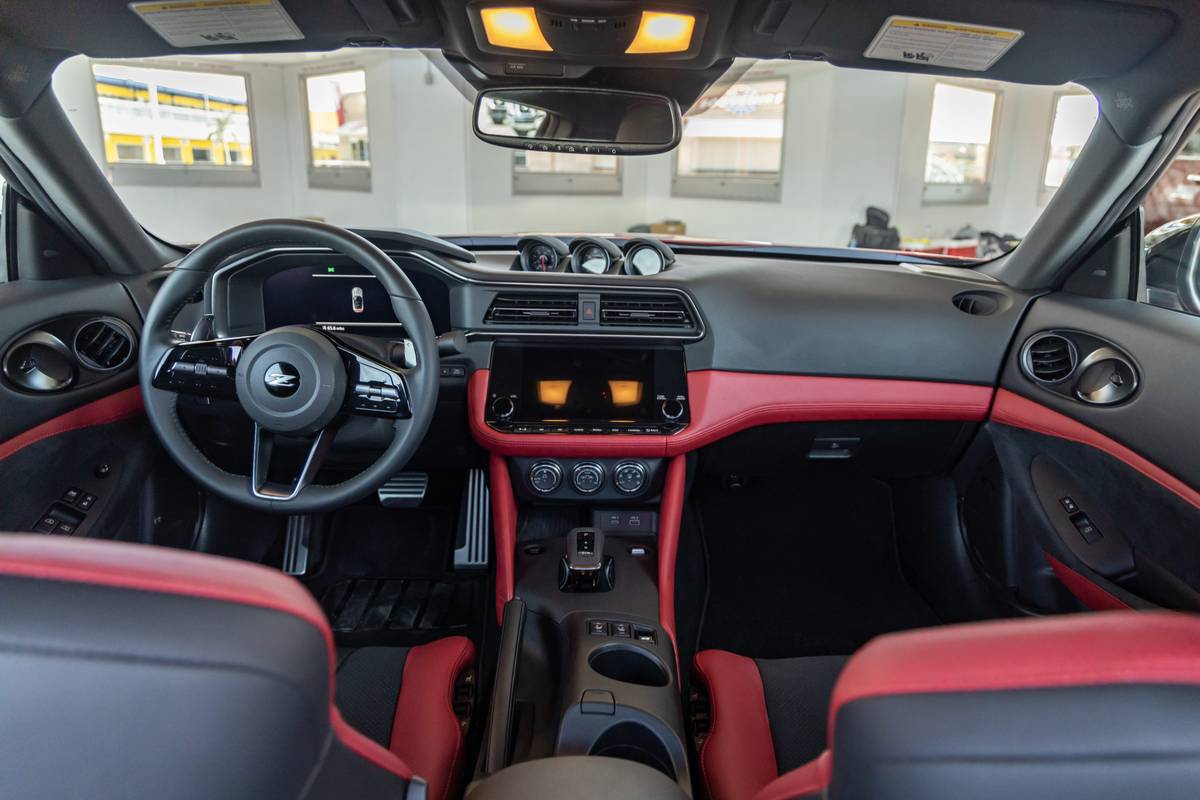 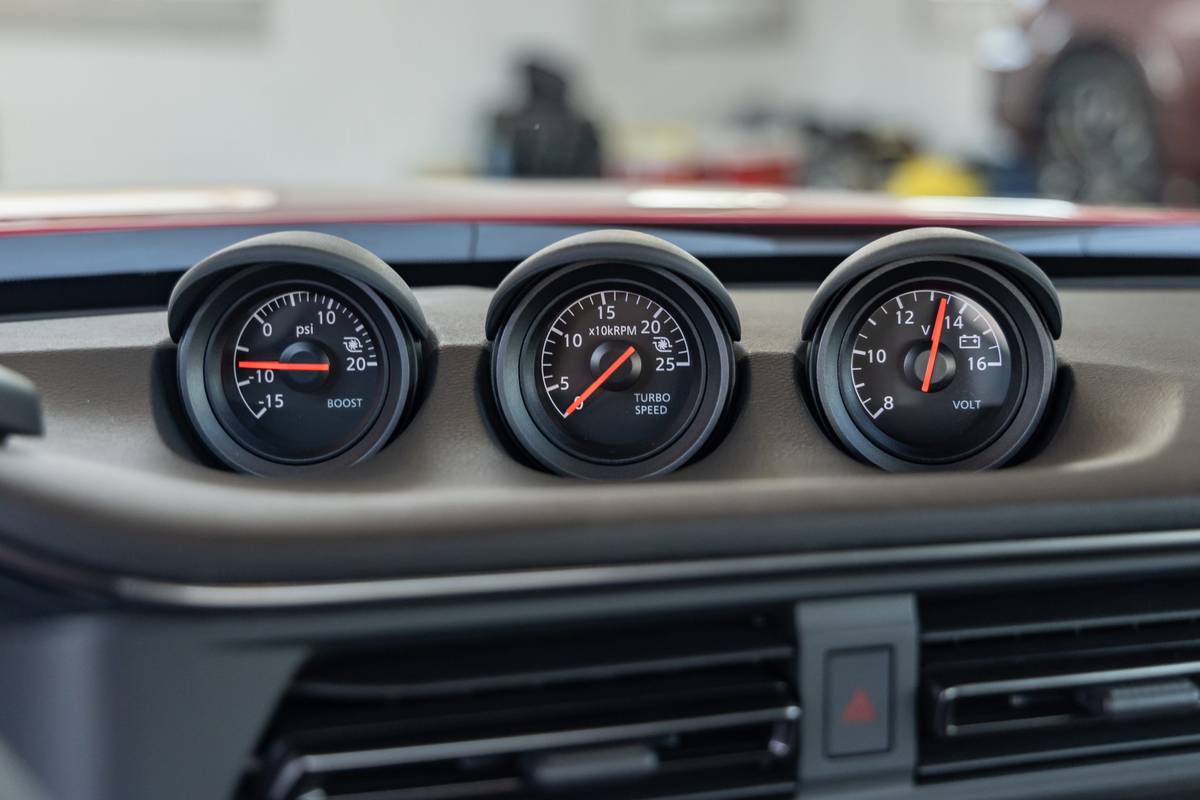 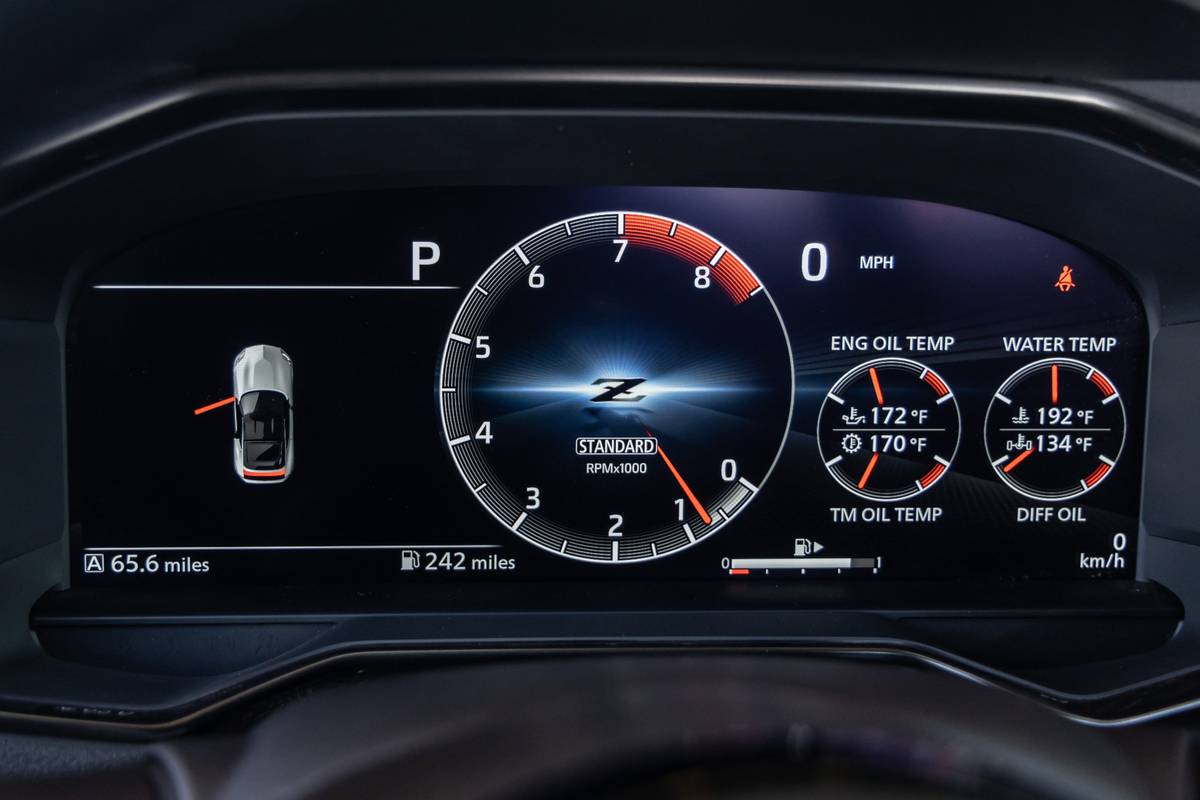 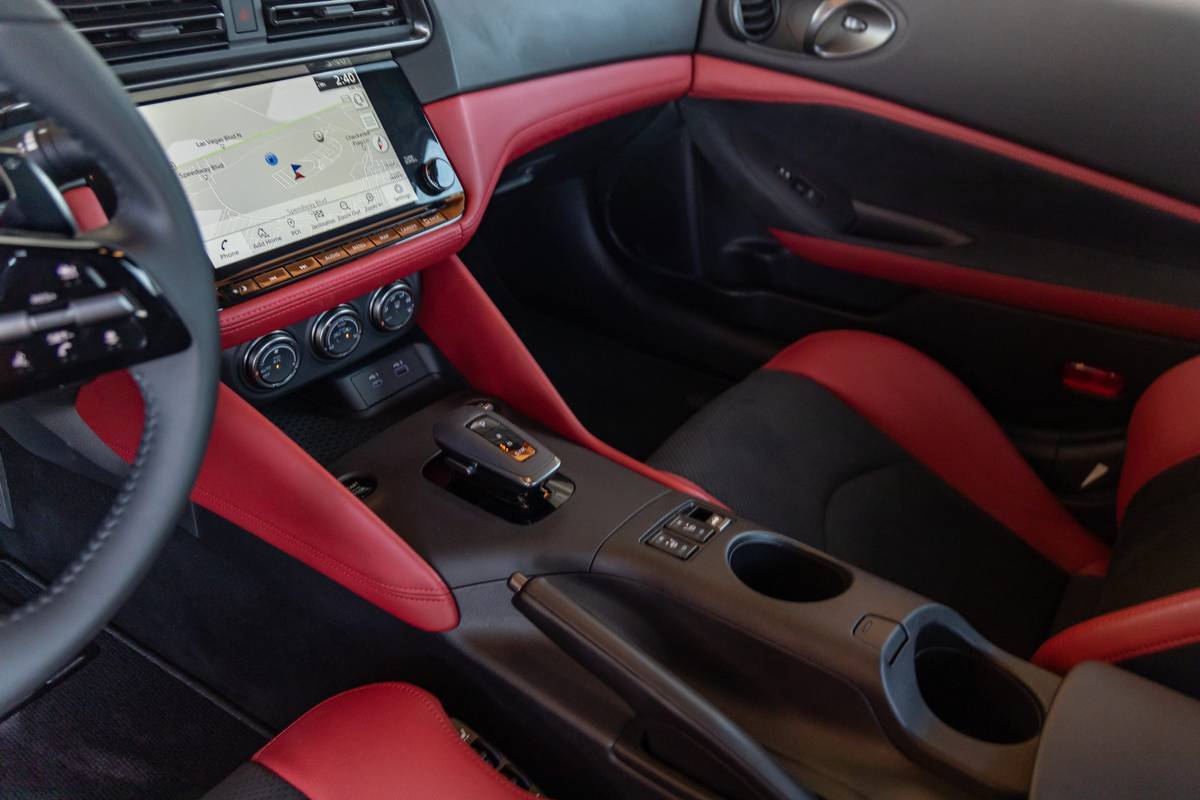 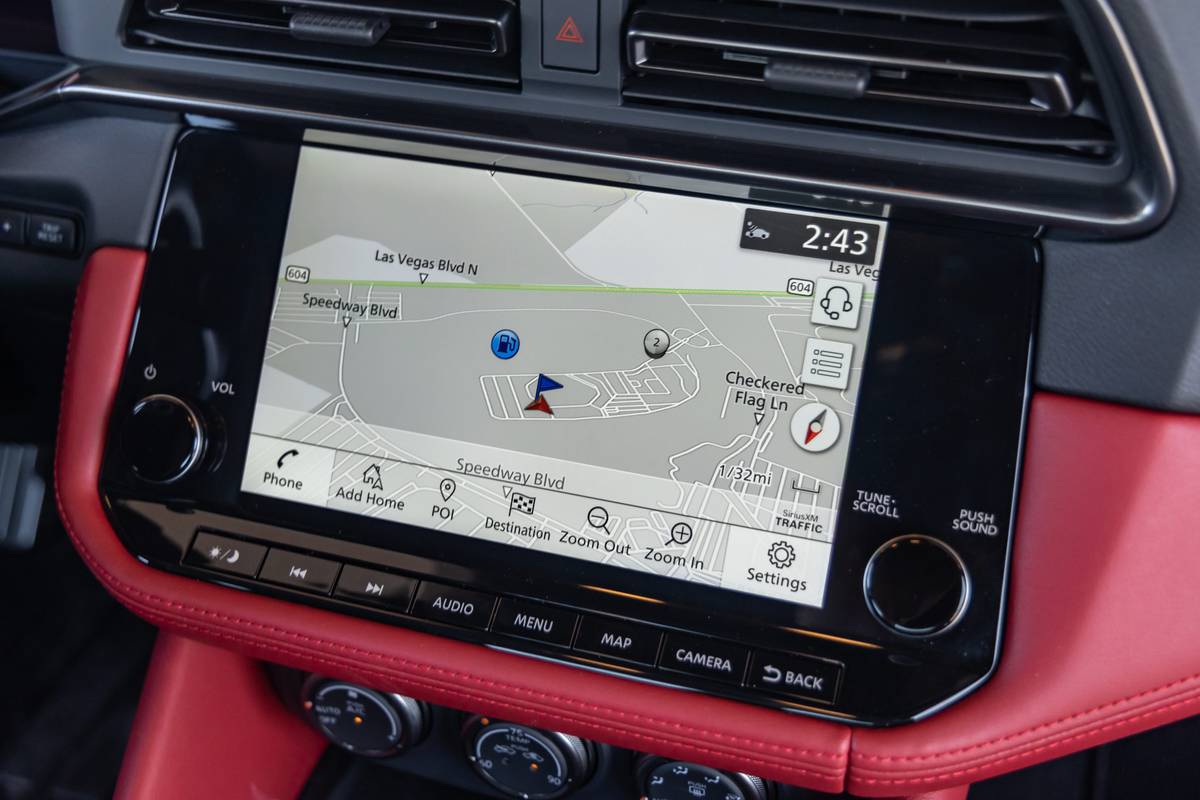 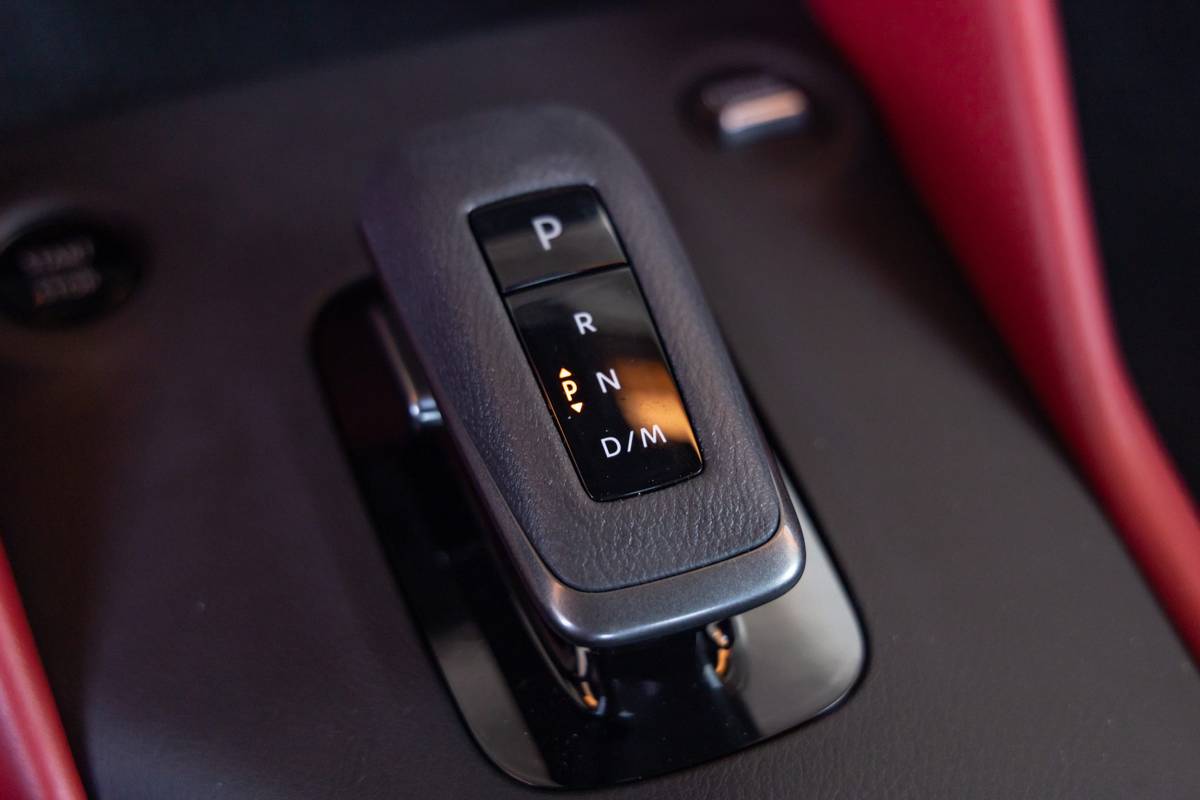 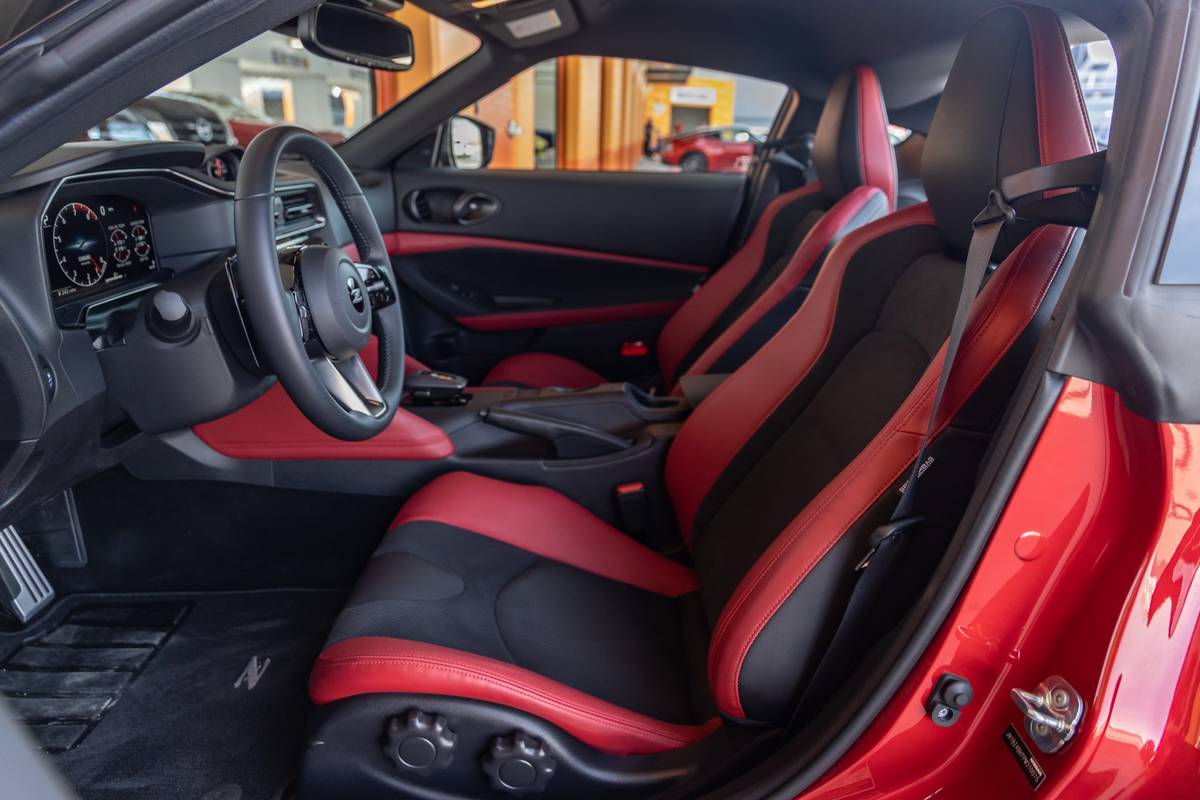 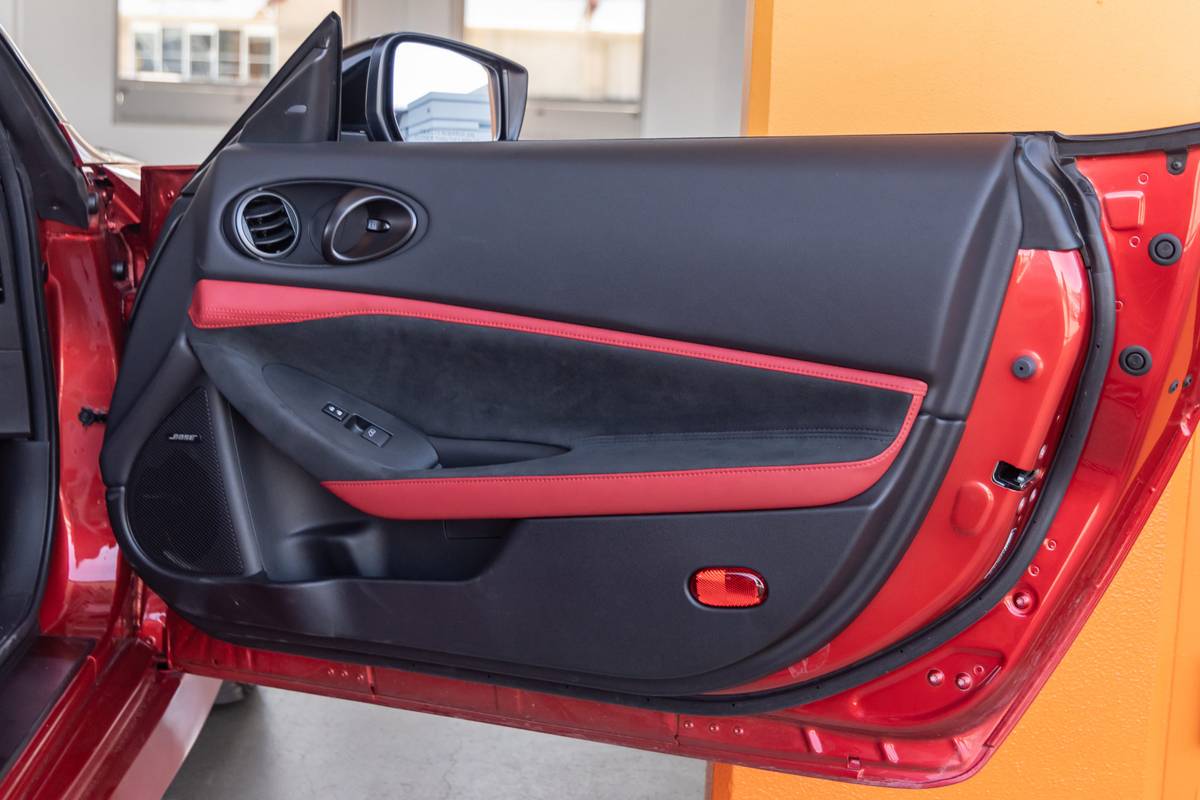 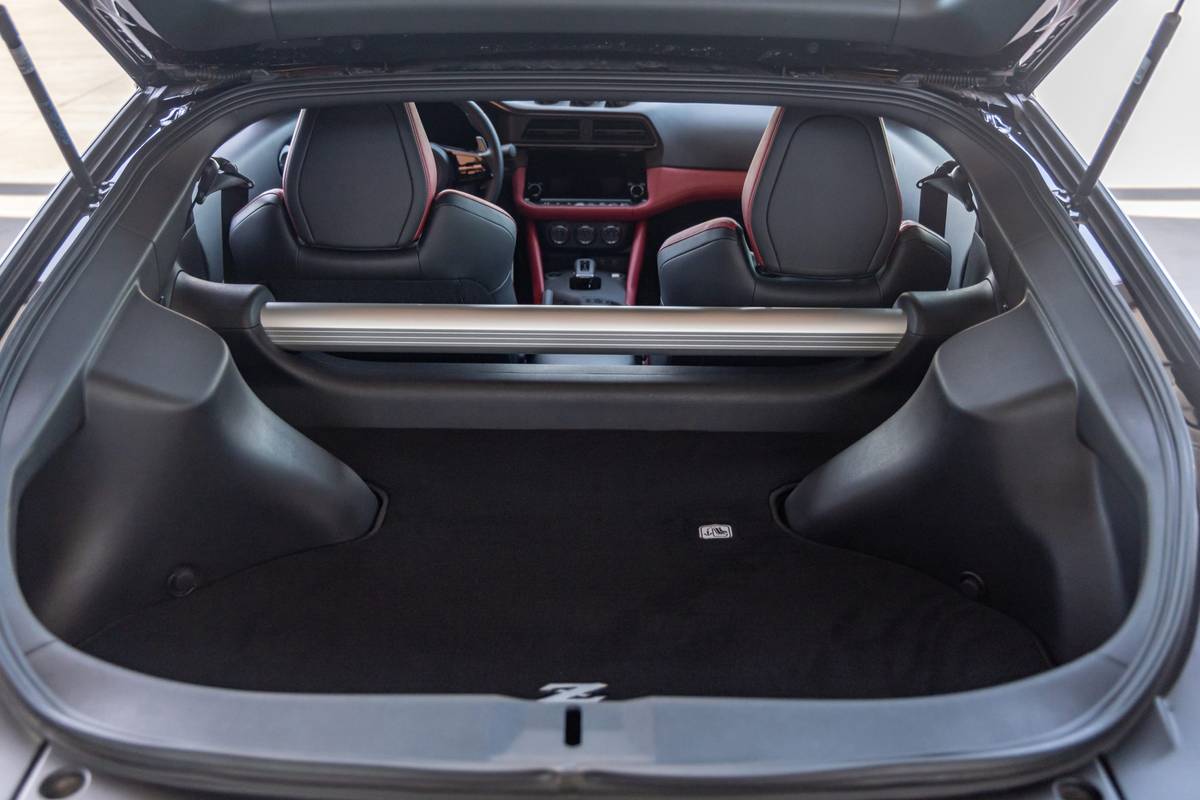 Despite the new design, the Z’s interior feels familiar, with the sightlines and driving position similar to the 370Z’s. I’m about 6 feet tall, and while there wasn’t a lot of extra space in the cabin, I didn’t feel cramped or claustrophobic, either. The steering wheel now telescopes in addition to tilting, making it easier to tailor the driving position to your liking, and I had enough headroom and legroom.

I particularly like the Z’s sport seats. The seats in the Sport trim have cloth upholstery and manual adjustments, while the Performance model gets leather trim, seat heaters, power adjustments and different side bolsters. Both the cloth and leather-trimmed seats have large suede-style inserts that firmly grip your backside and do a good job preventing you from sliding around in the seat — even on the track.

Storage areas include pockets in the doors and nooks behind the seats. The revised center console also now includes a second cupholder. Lifting the rear hatch reveals a decent-sized cargo area.

Should You Buy the Nissan Z?

With a starting price around $41,000 (all prices including destination), the 2023 Z delivers a lot of driving fun for the money, and the price is the same whether you get the six-speed manual or nine-speed automatic.

Stepping up to the Performance trim, however, brings a significant $10,000 price increase: This model costs $51,015. That’s still less than a six-cylinder Supra’s base price, but the extra $10,000 seems like a lot of money for the Performance model’s extra features. In addition to the aforementioned upgrades, the Performance trim gets larger brake rotors, beefier brake calipers, a mechanical limited-slip differential, front and rear spoilers, and a Bose premium stereo.

For some shoppers, the Z’s available manual transmission could have tipped the scales in its favor compared with the Supra, but Toyota’s high-performance sports car will also offer a manual beginning with 2023 models.

While both of these sports cars are powerful and have impressive performance-oriented automatic transmissions, I’d take the Z because it felt more composed overall in a track environment, the interior fits me better, and I prefer its styling. All in all, the Z is more enjoyable to drive, and with these cars, that’s what matters most.