Looks like: Just another special-edition Mustang, but with different stripes and grilles

It’s a name that hasn’t been seen on the side of a Mustang since the last one featured it 17 years ago: Mach 1. No, not Mach-E — that’s the electric SUV that Ford decided to christen with the Mustang name in order to drum up some support. This Mach 1 is the real deal: the ultimate 5.0-liter ’Stang for people who aren’t yet ready to splurge on that $62,000 Shelby GT350, but who want something a bit more special and nostalgia-inducing than a simple V-8 GT with all the various (and highly capable) Performance Pack options.

After developing half a dozen performance variations and packages for the current Mustang, Ford has found itself in the enviable spot of being able to pick and choose various upgraded systems and compile them into this special-edition Mach 1, which will feature a limited run of vehicles when production starts.

Outside, Ford has made a few modifications to the Mustang Mach 1. It comes in a few flavors: base or upgraded trims, with one optional Appearance Package that brings orange-trimmed stripes and an exclusive Fighter Jet Gray paint scheme.

Cosmetic changes to the Mach 1 are most notable up front, where a new two-piece upper and modified lower grille are present, both in dark Magnetic and black paint. Changes to the lower body have been made to incorporate new cooling vents for both oil and transmission coolers out of the GT350 parts bin. Out back, a new lower valance off the Shelby GT500 is present for better air management, and that car’s rear wing with its adjustable Gurney flap is an option for improved downforce.

What does the new Mach 1 not have? Well, unlike several previous versions of the iconic name, it does not have a shaker-style hood. According to Ford, that wasn’t actually standard on the original Mach 1, just a popular option, and one that the company didn’t see as essential for the latest version. 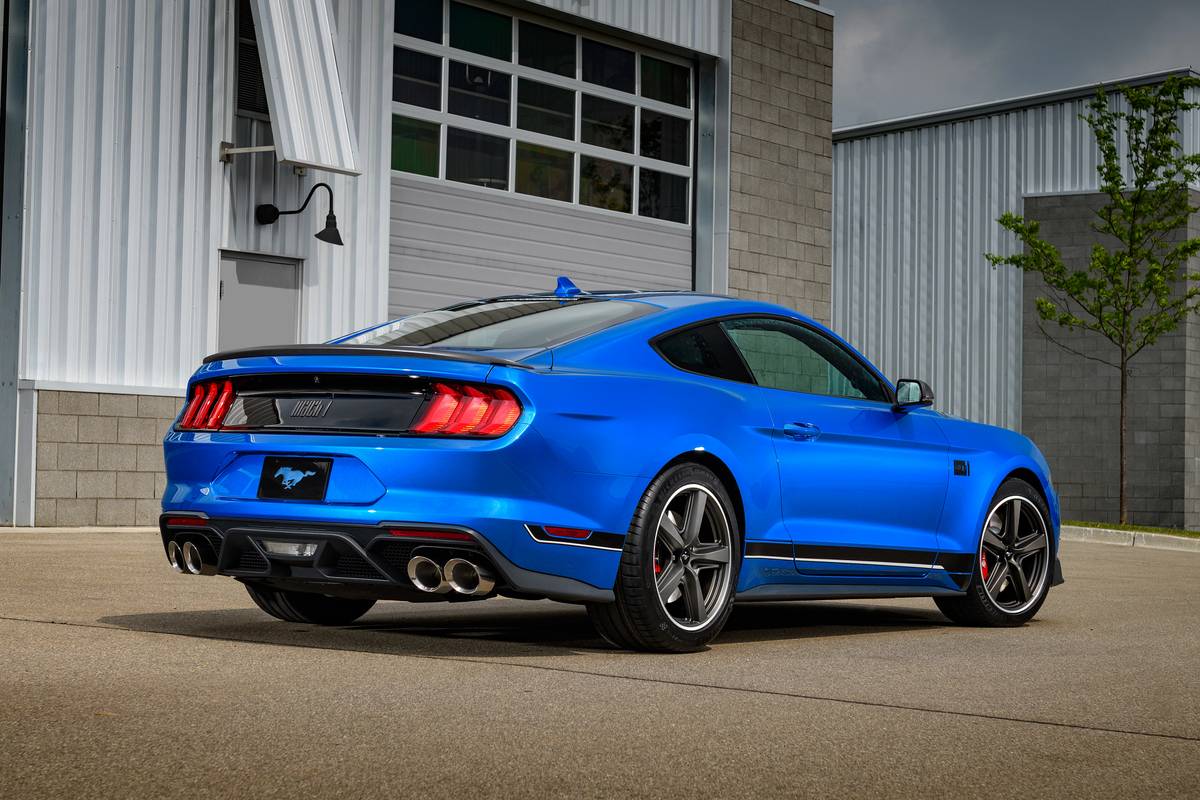 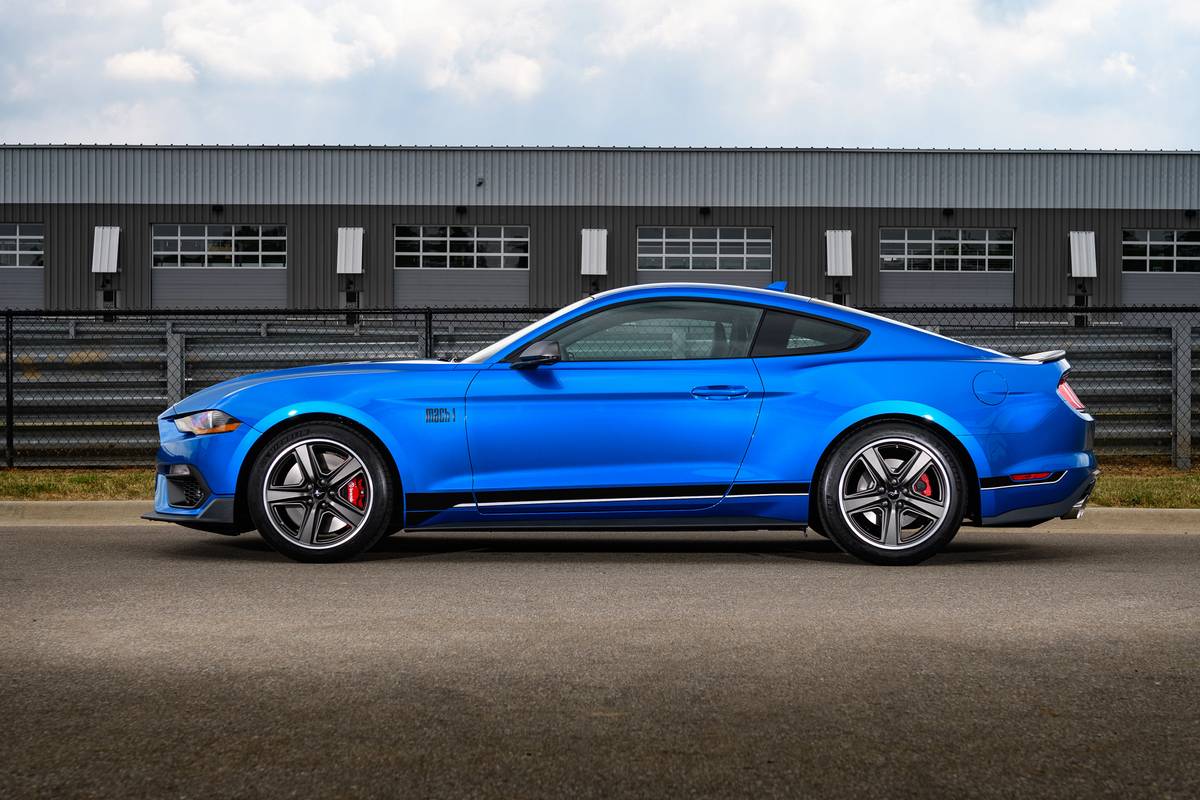 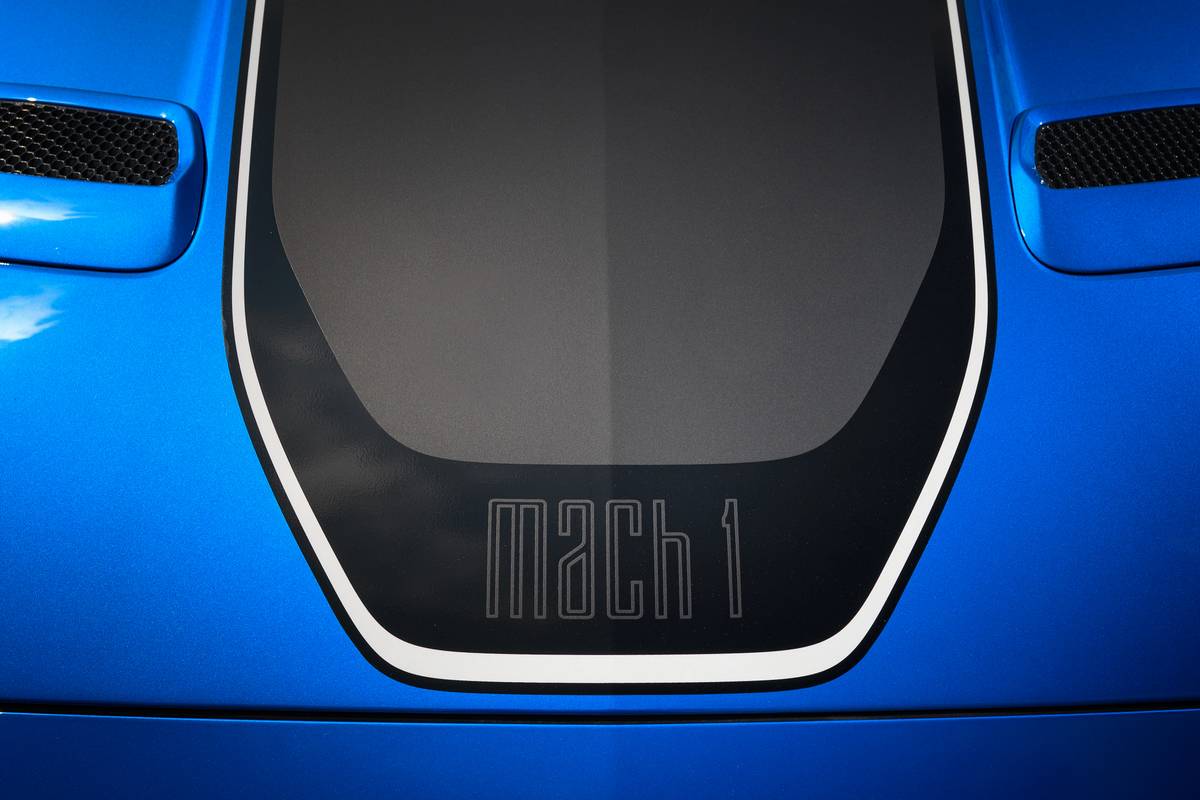 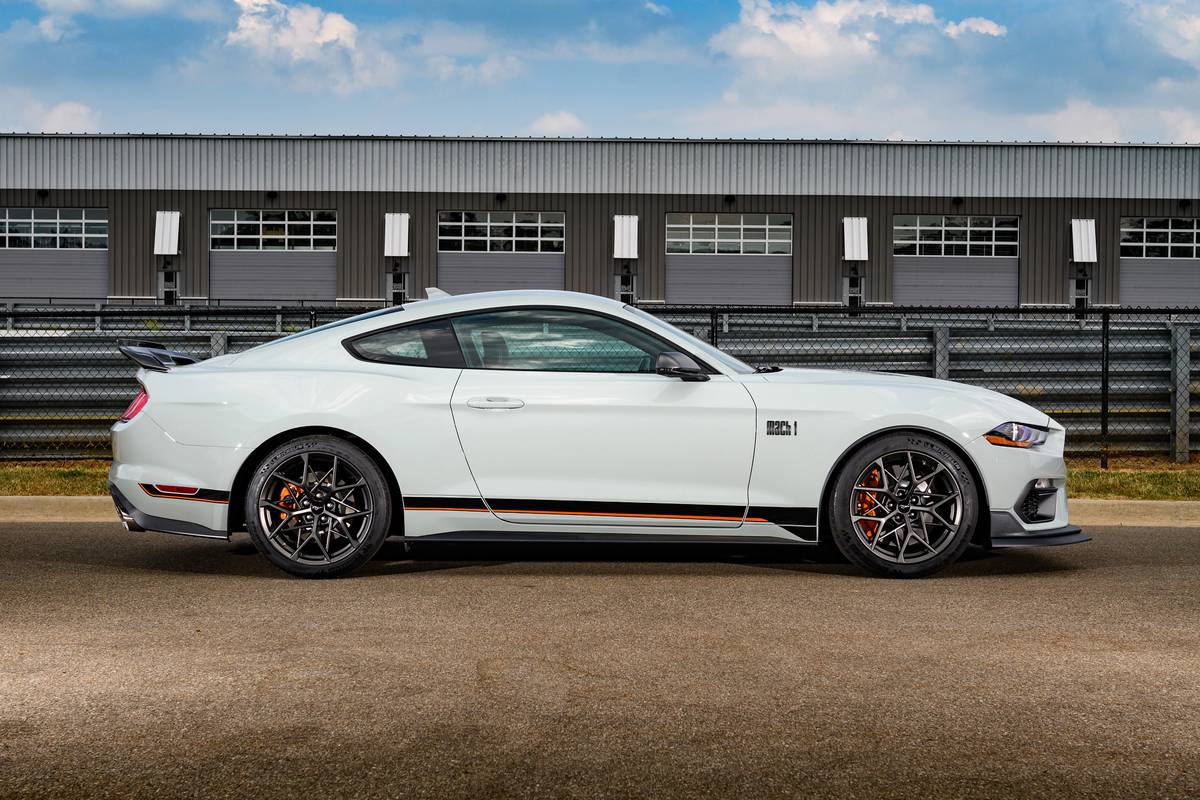 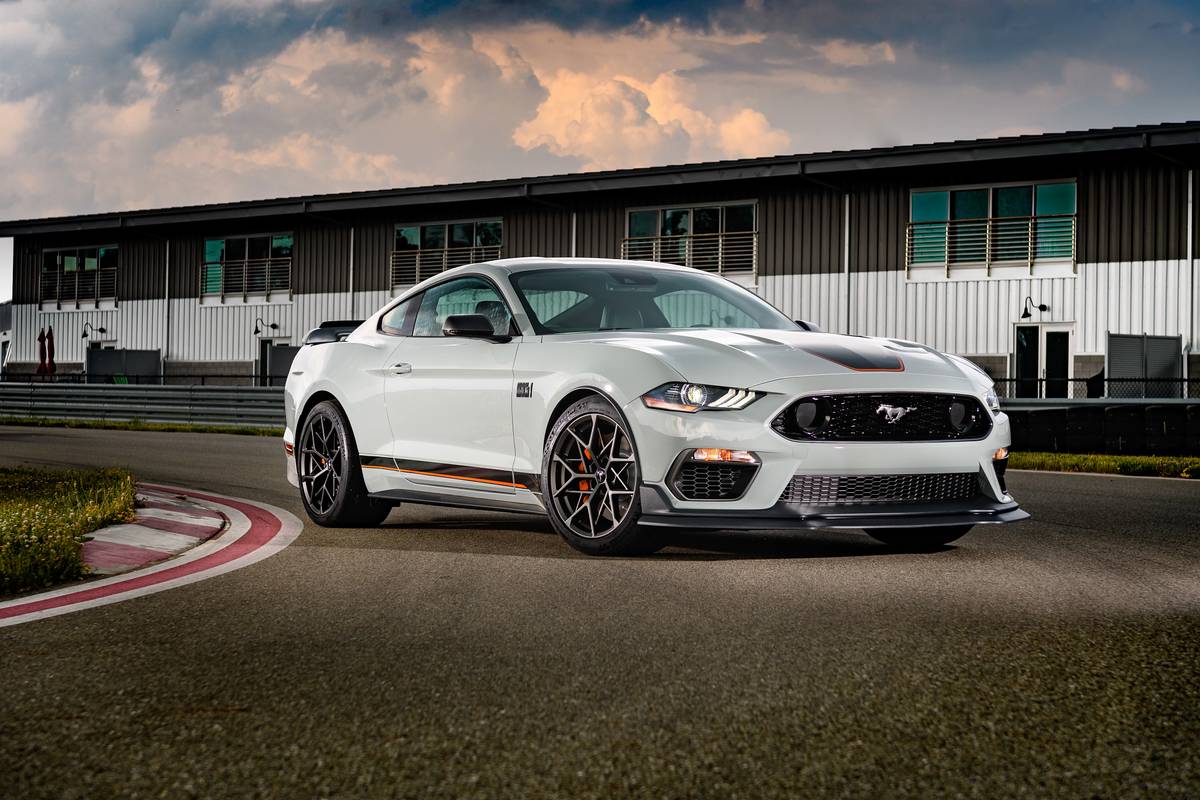 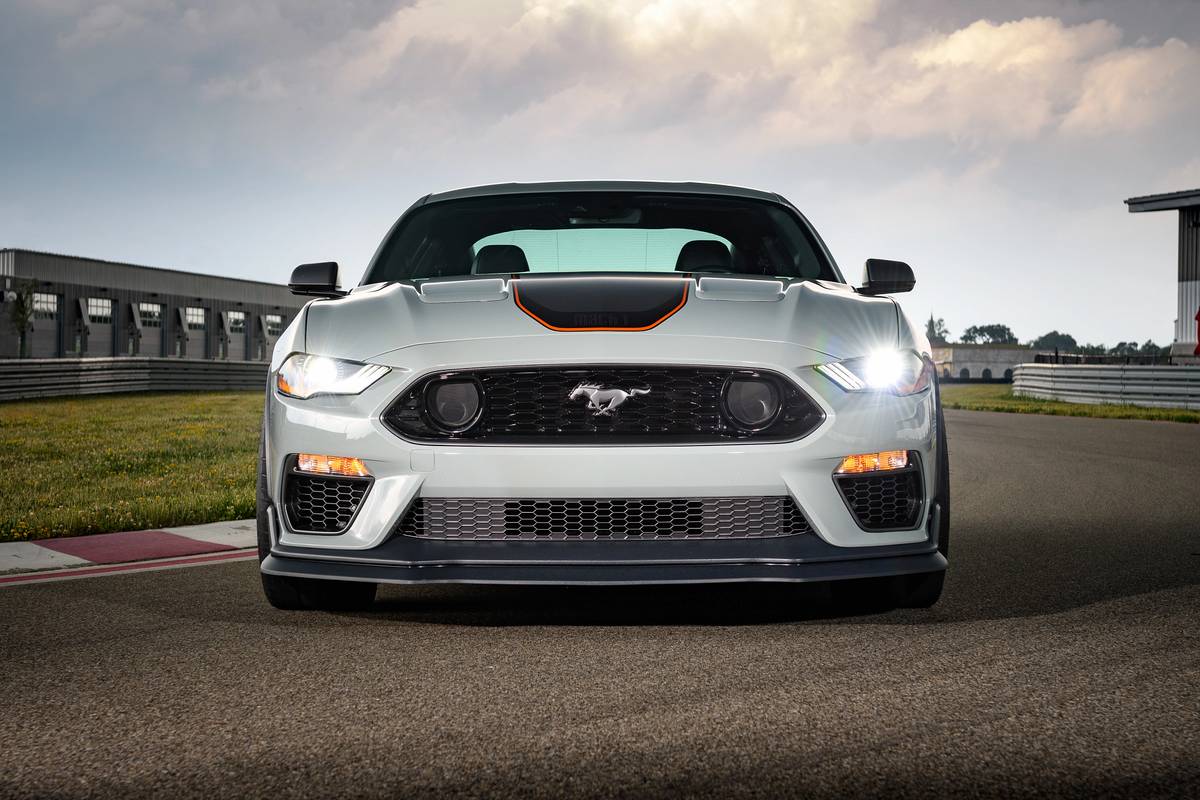 Inside, the Mach 1 isn’t all that different from a GT or a Bullitt. A new instrument-panel finish that Ford calls “Spindrift” adorns the dashboard, and various badges and sill plate changes have been made. A new Mach 1-specific splash screen appears in the digital gauge cluster upon startup, and a logoed cue-ball shifter is present if you select the manual transmission option. If you choose the Appearance Package, you’ll get some mild orange trim bits, such as strips of leather in the Mach 1’s sport seats.

The goal for the new Mach 1 was to make it a trackable Mustang, much like the GT with Performance Packs 1 and 2 — but to throw in a good bit of the Mach 1 nostalgia for fans of the Mustang to enjoy. The car receives a boost in power to 480 horsepower and 420 pounds-feet of torque, which isn’t any more than you’ll find in the Bullitt edition of the Mustang, but which is 20 hp more than the standard GT. The transmission is either a six-speed manual with a new rev-matching function or an optional 10-speed automatic with special tuning and an updated torque converter.

Other special parts include the rear axle cooling system out of the GT500, along with the rear underbody diffuser, also from the top performance Mustang. The brakes are Brembo stoppers from the Performance Pack 2 but featuring some new lining formulas. The cooling capacity gets a massive 50% increase versus the Performance Pack 1 GT, thanks to new aerodynamic side vents and a new fascia shape. 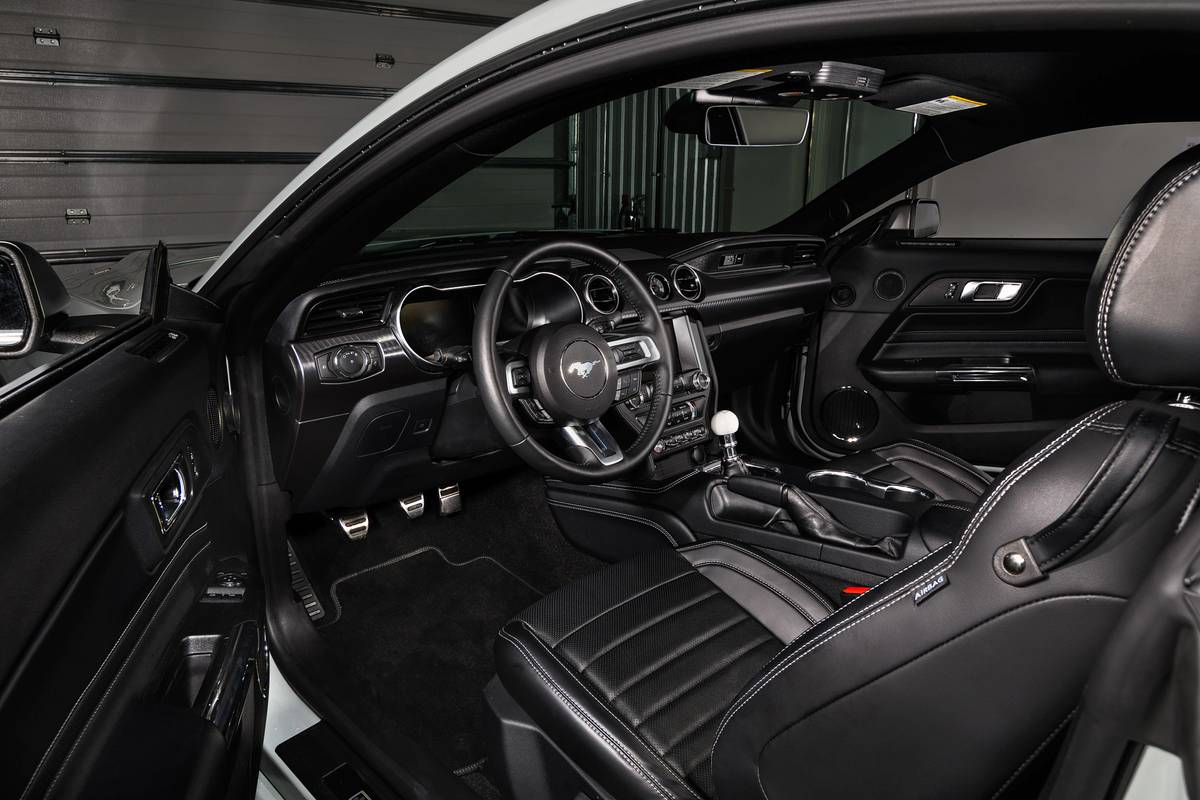 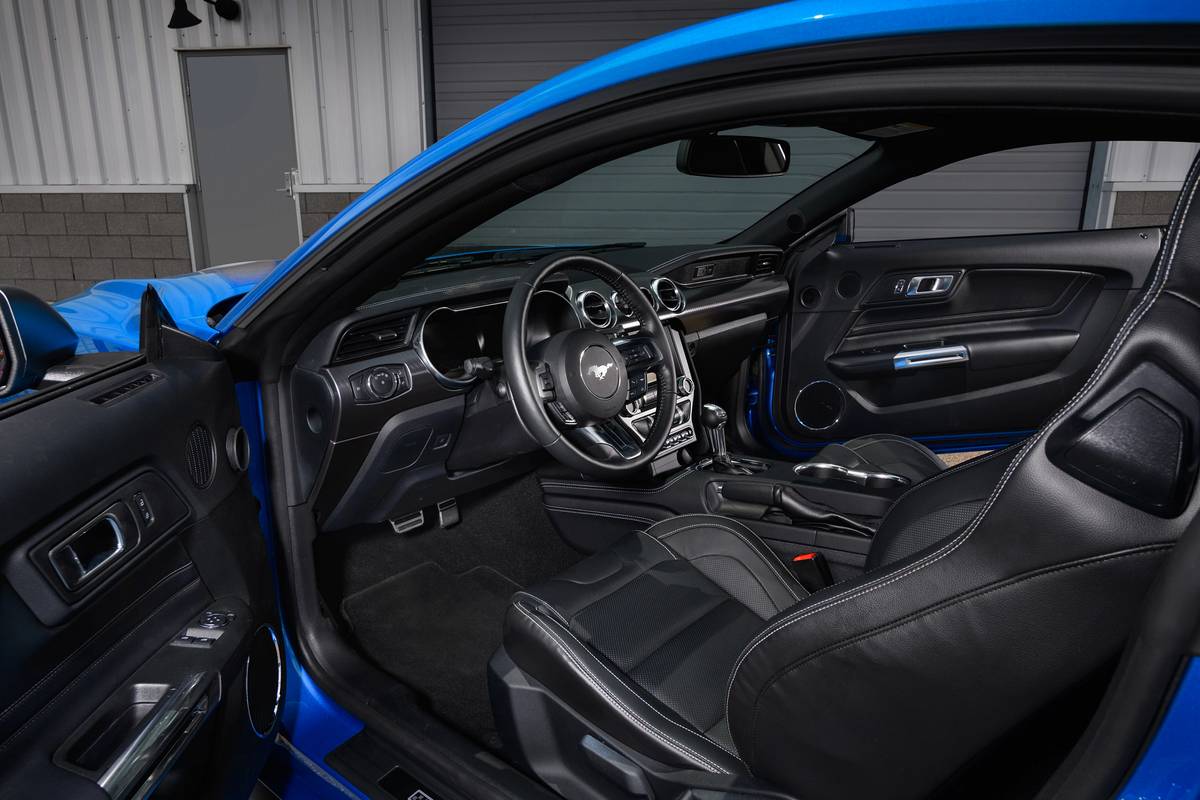 Helping you corner will be standard MagneRide electronic adjustable suspension, which uses magnetorheological (say that three times fast) fluid dampers instead of standard shock absorbers to allow you to change your Mustang from boulevard cruiser to track monster with the push of a button. There’s a stiffer steering shaft and recalibrated electronic power steering, and stiffer stabilizer bars and springs, the brake booster from the Performance Pack 2, stiffer bushings in the rear subframe and a rear toe-link from the Shelby GT500.

The standard tires are Michelin Pilot Sport 4 on 19-inch wheels, 9.5-inch front and 10-inch rear in width. Opt for the Handling Package, and you get the upgraded unique 19-inch wheels running Michelin Pilot Sport Cup 2 tires (10.5 inches wide up front and 11 inches wide in the rear), a front air splitter, the adjustable GT500 wing and manually adjustable strut top mounts — all allowing you to set up your Mach 1 to your tastes depending on the track you’ll be driving on.

No pricing is yet known for the new 2021 Ford Mustang Mach 1, but that will surely be revealed as we approach its on-sale date, which is also not exactly soon: The car is expected to hit showrooms in the spring 2021.