Looks like: Infiniti wants a piece of the four-door coupe market

Chance of being mass-produced: Certain design and technology elements will likely appear in future Infinitis.

The coupelike sedan party has been raging for a while now, but even as it’s spread from luxury brands to mainstream ones, Infiniti has stayed on the sidelines. With the debut of the Q Inspiration Concept at the 2018 North American International Auto Show in Detroit, however, it looks like that’s about to change. Besides serving as a test bed for advanced drivetrain and self-driving technologies, Infiniti said in a statement that the Q Inspiration Concept is “previewing a new generation of Infiniti vehicles.”

Infiniti also said the Q Inspiration Concept is the first realization of Infiniti’s new design language, which emphasizes straight lines and clean surfaces for what the luxury brand says is a “pure and simple — yet muscular — design execution inspired by modern powertrain technologies.”

The modern powertrain technology is not an all-electric drive system like the one in parent company Nissan’s Leaf hatchback but rather the new variable-compression-ratio engine that powers the redesigned 2019 Infiniti QX50 SUV.

The concept’s smooth surfaces are interrupted by sharp slits in the hood and in the bodywork around the front wheels, but the grille styling is likely to be the most eyebrow-raising element of the otherwise uncontroversial design. Taking on a new shape and ringed with lights, the grille has thin vertical slits in its white surface that recall, unfortunately, a baleen whale. Lincoln had a similar problem with its grille styling a few years ago before quickly moving to a new look.

Like the exterior, the cabin has a clean, unadorned design. There’s room for four people on individual bucket seats, and each passenger gets their own touchscreen for enjoying entertainment; people who get nauseous looking at their smartphone in the car need not apply. The interface also includes biometrics monitoring and a guided-meditation mode to help keep stress levels in check — which could be useful in certain parts of the country. Interior materials include birch wood trim, white quilted leather and metallic trim. 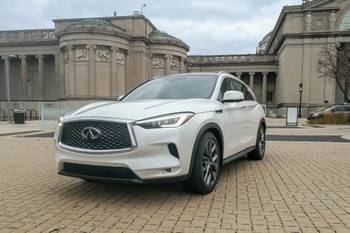