CARS.COM — Porsche’s updated flagship SUV, the 2019 Cayenne, has made its North American debut at the 2017 Los Angeles Auto Show.

Exterior updates are relatively minor: Cayenne and Cayenne S models receive a revised front end with larger air intakes, and the Cayenne Turbo gets a unique face to clue in bystanders regarding its performance capabilities. New head- and taillights make use of LEDs, and the body uses more aluminum in its construction for weight savings.

Inside, the multimedia system now features the same 12.3-inch screen first used in the new Panamera. Additionally, the center console’s physical buttons have been replaced by a glossy black panel with semi-capacitive “buttons.”

In terms of performance, these are still Porsches even if they include a “Rocks” driving mode — the Cayenne and Cayenne S are again powered by a V-6 engine, now featuring single and twin turbochargers, respectively. The Cayenne makes 340 horsepower and 332 pounds-feet of torque, 40 more horsepower and 37 more pounds-feet than its predecessor; the Cayenne S gets 20 extra horses and no change in torque figures, for a total of 440 hp and 406 pounds-feet.

The Cayenne Turbo’s twin-turbocharged V-8 now makes 550 hp and 567 pounds-feet of torque, up 30 hp and 14 pounds-feet over the outgoing Turbo. That’s good enough to propel the SUV from zero-to-60 mph in 3.7 seconds when equipped with the optional Sport Chrono package, according to Porsche. Bringing all forms of the big SUV to a halt might involve optional Porsche Surface Control Brakes — standard on the Turbo — that are coated in a layer of tungsten carbide to improve stopping performance and increase wear resistance.

Check out the gallery above, and stay tuned for more info as the Cayenne and Cayenne S hit dealerships sometime in the middle of 2018, while the Turbo arrives in the fall of 2018. 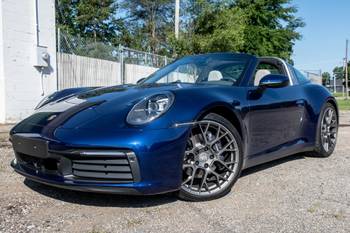