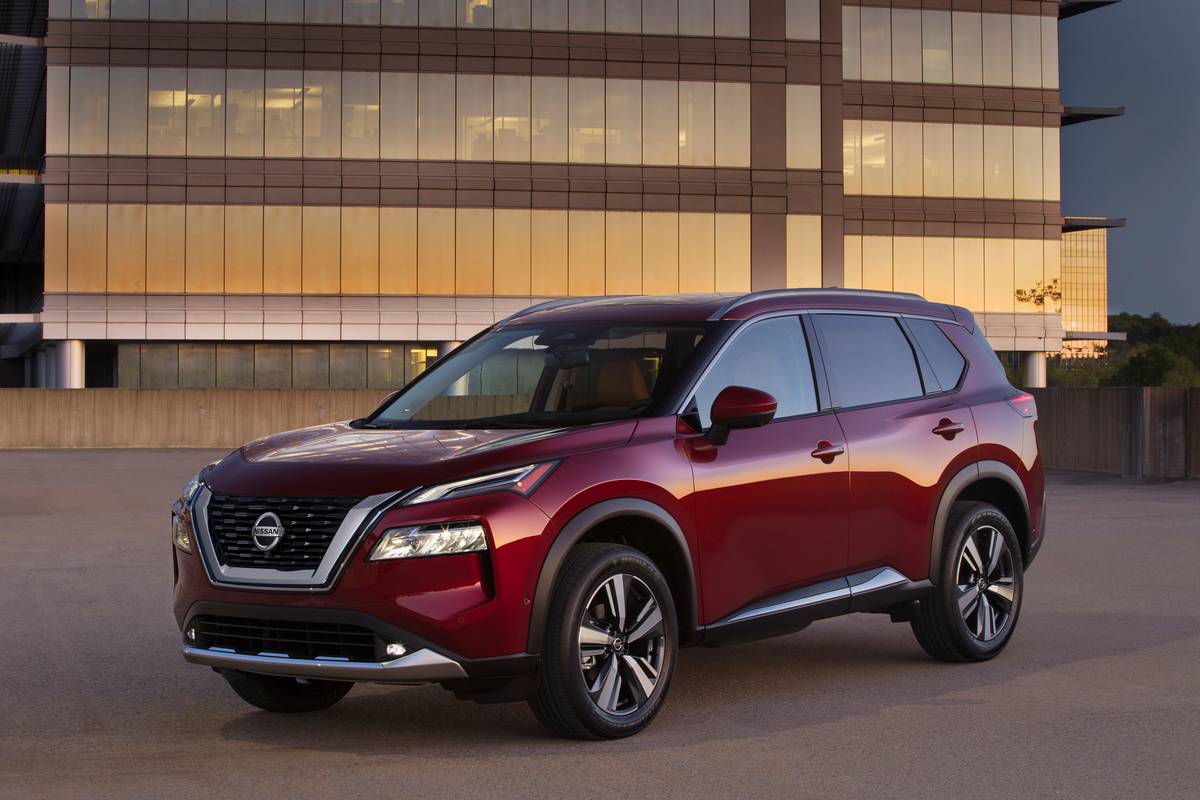 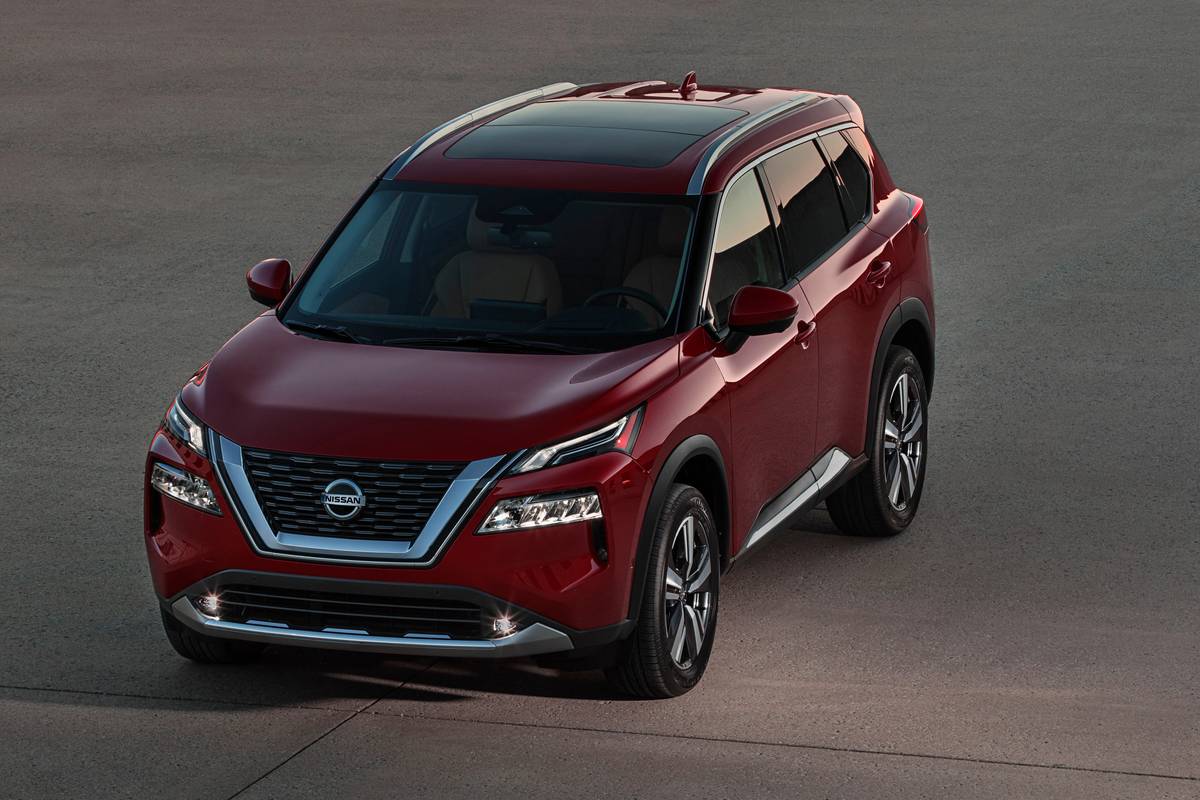 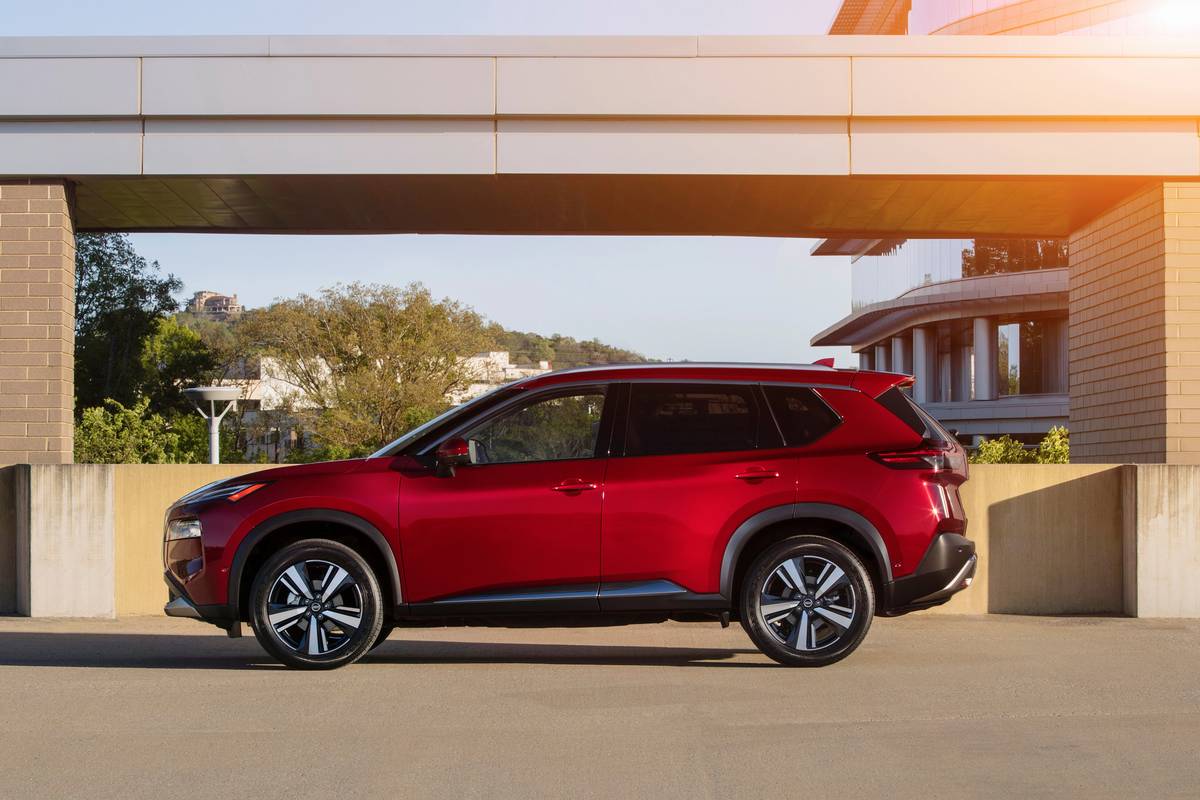 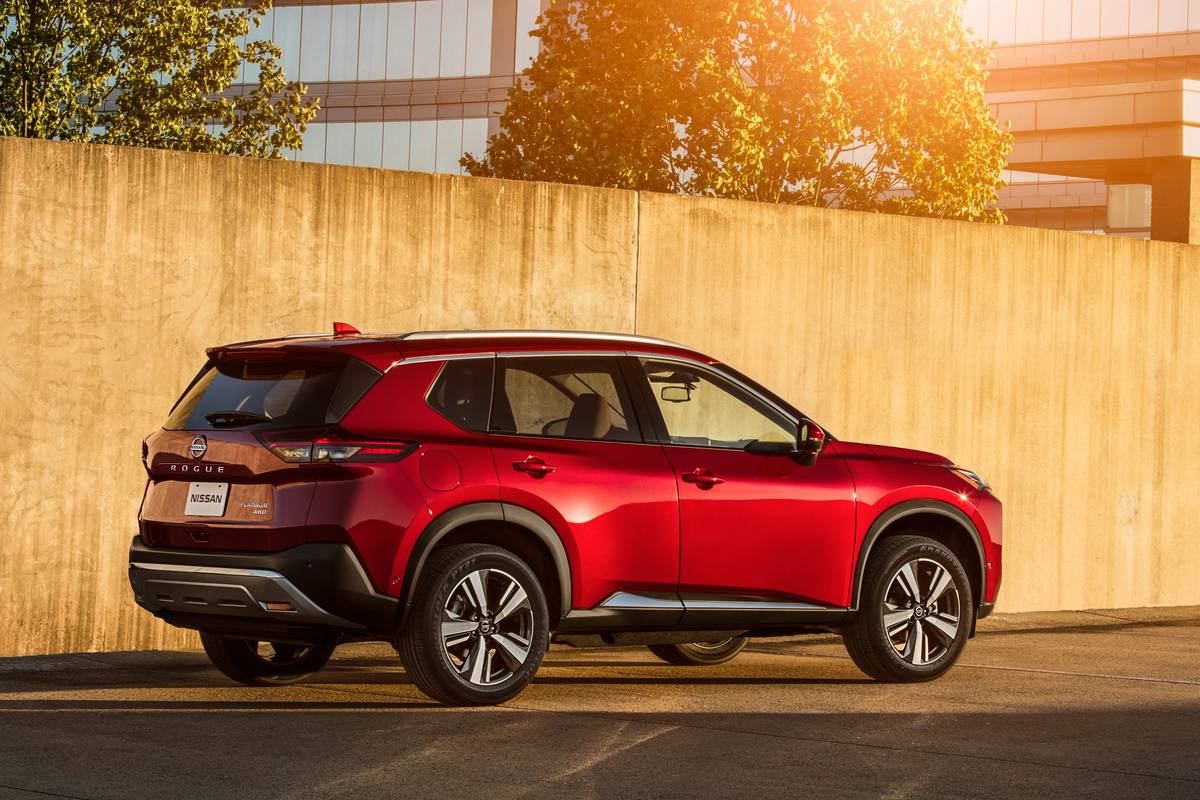 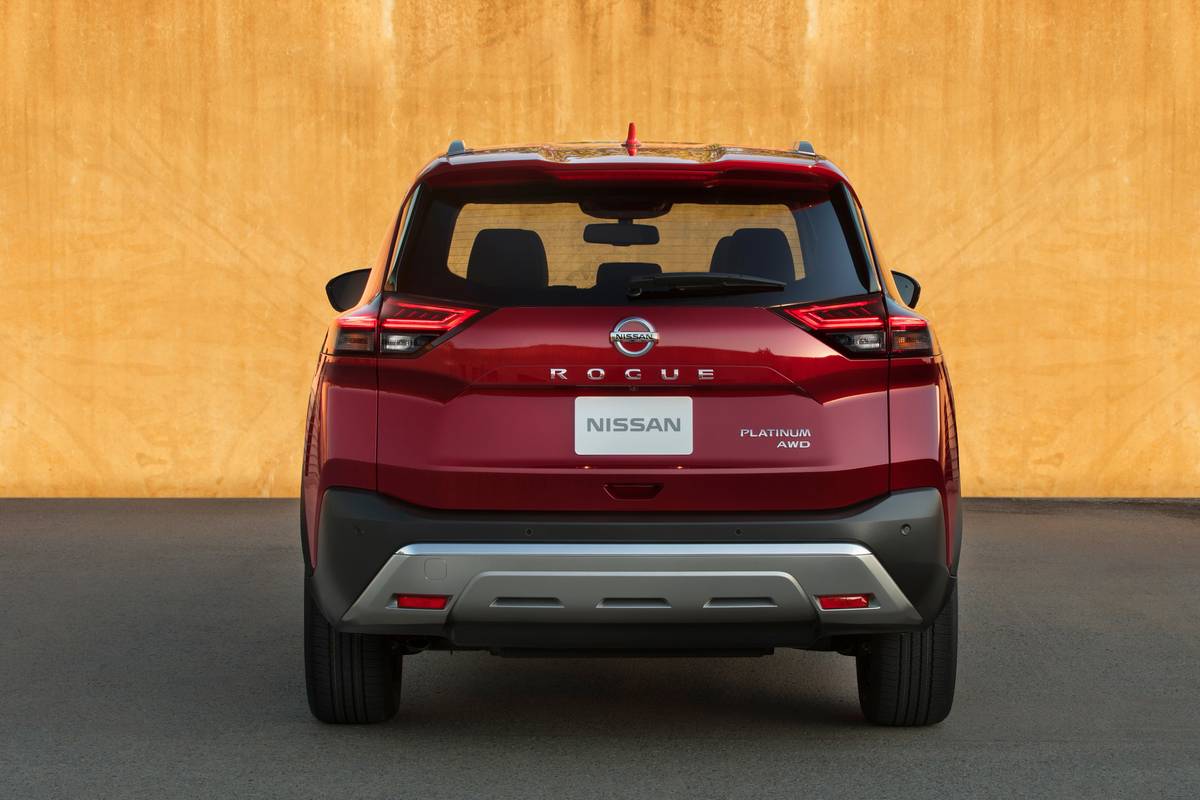 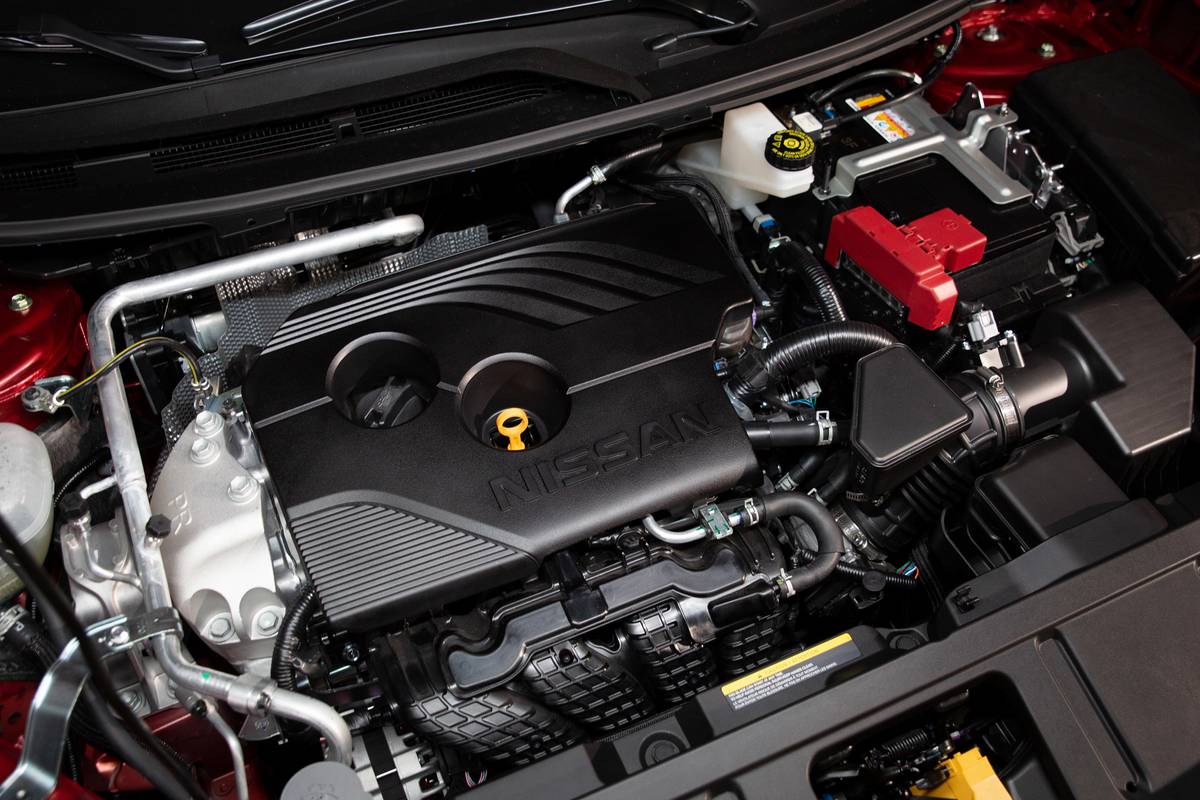 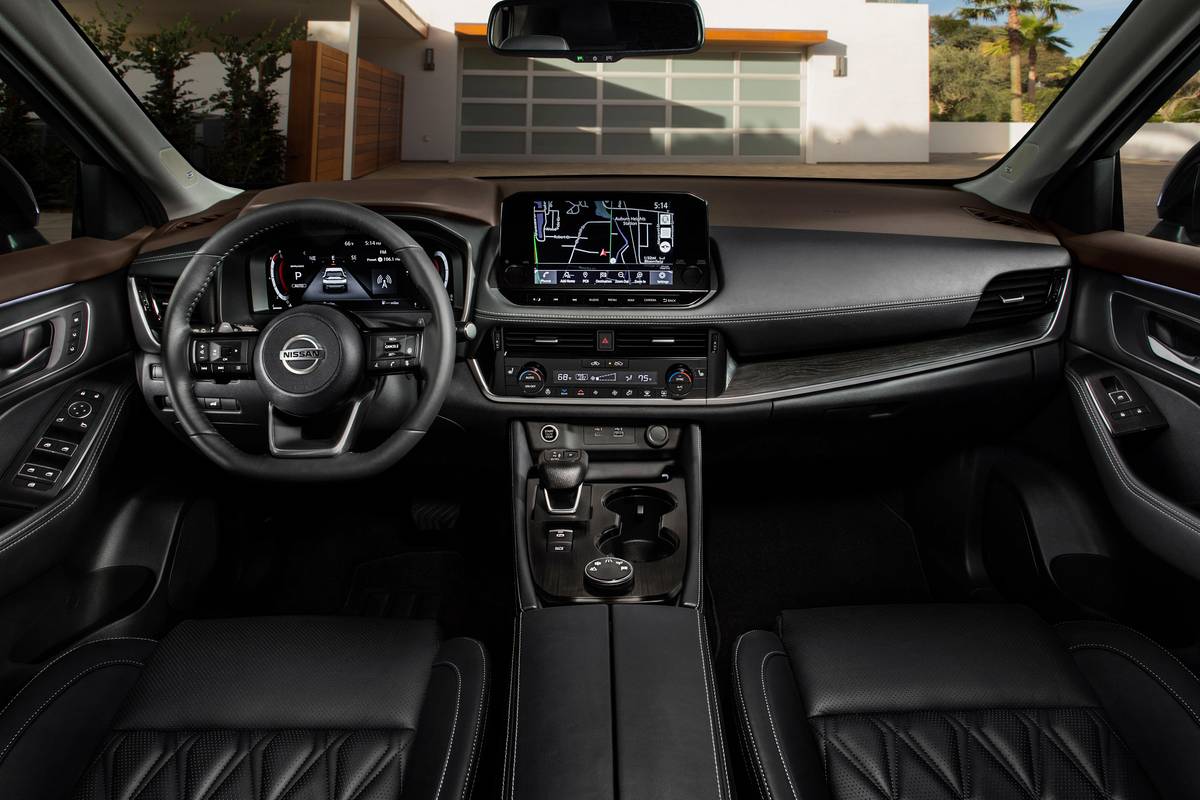 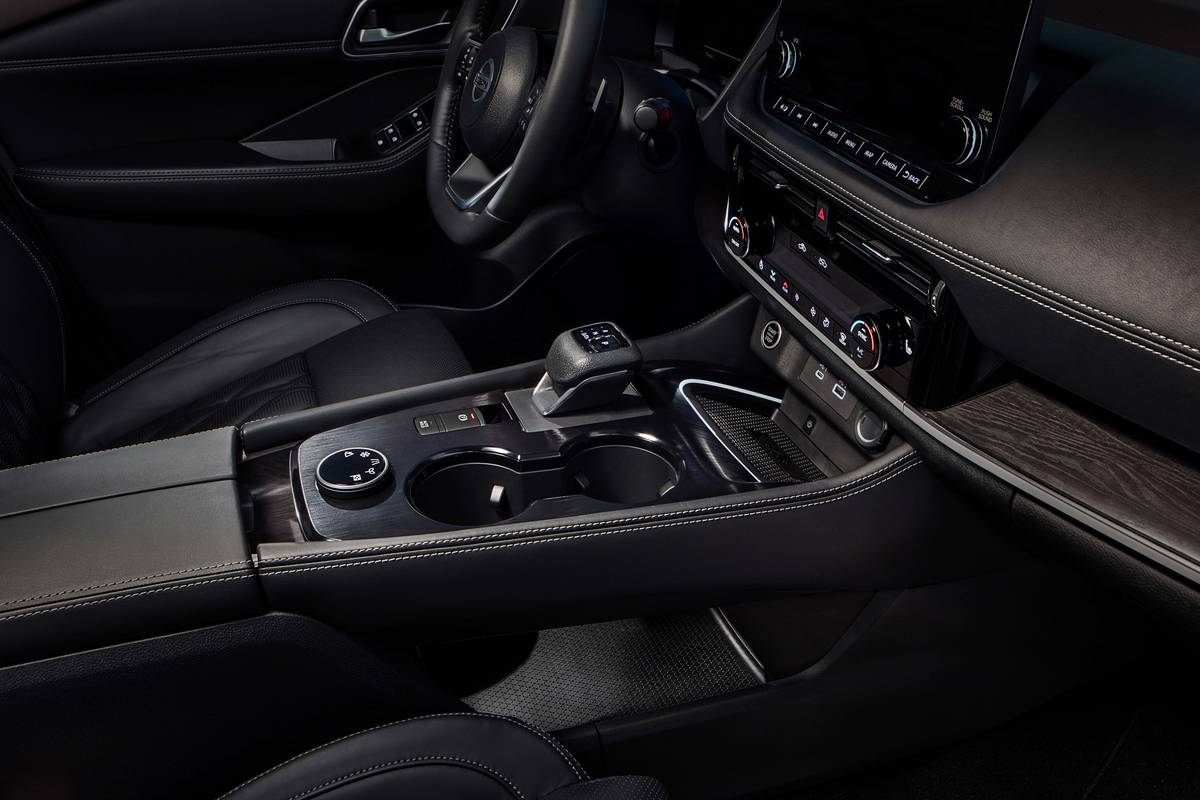 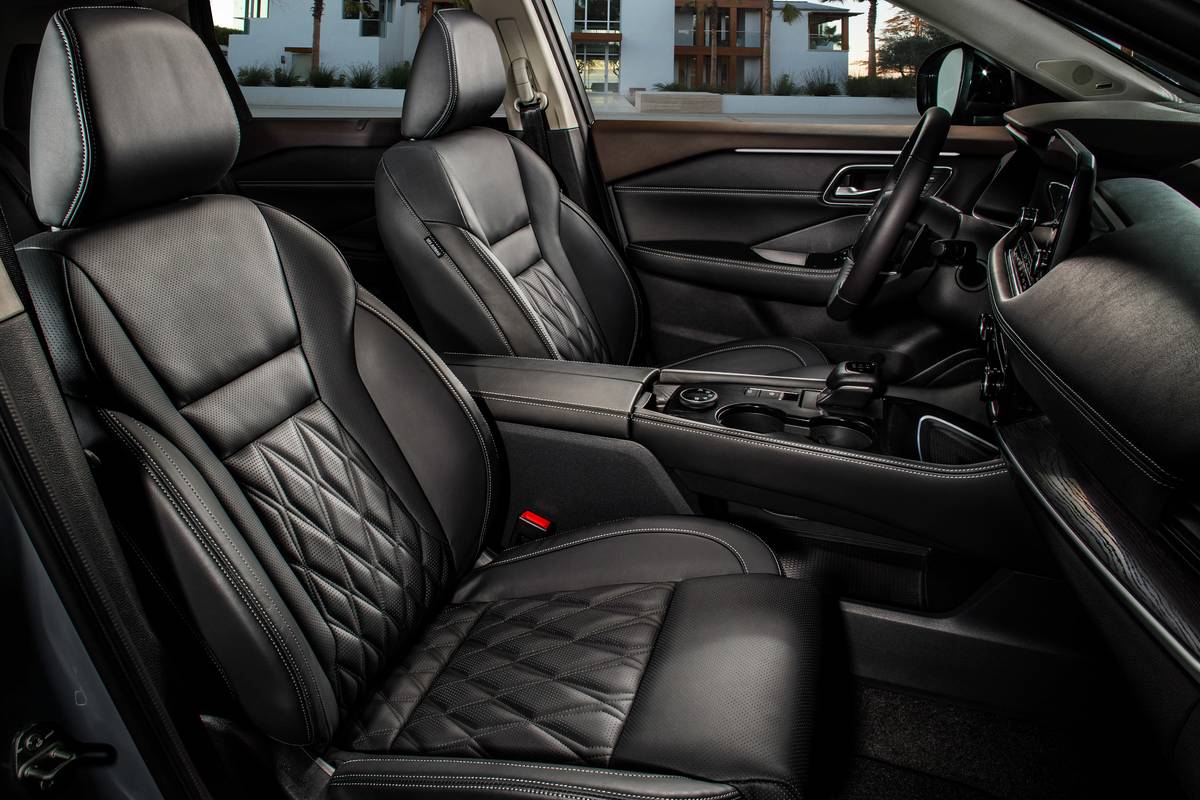 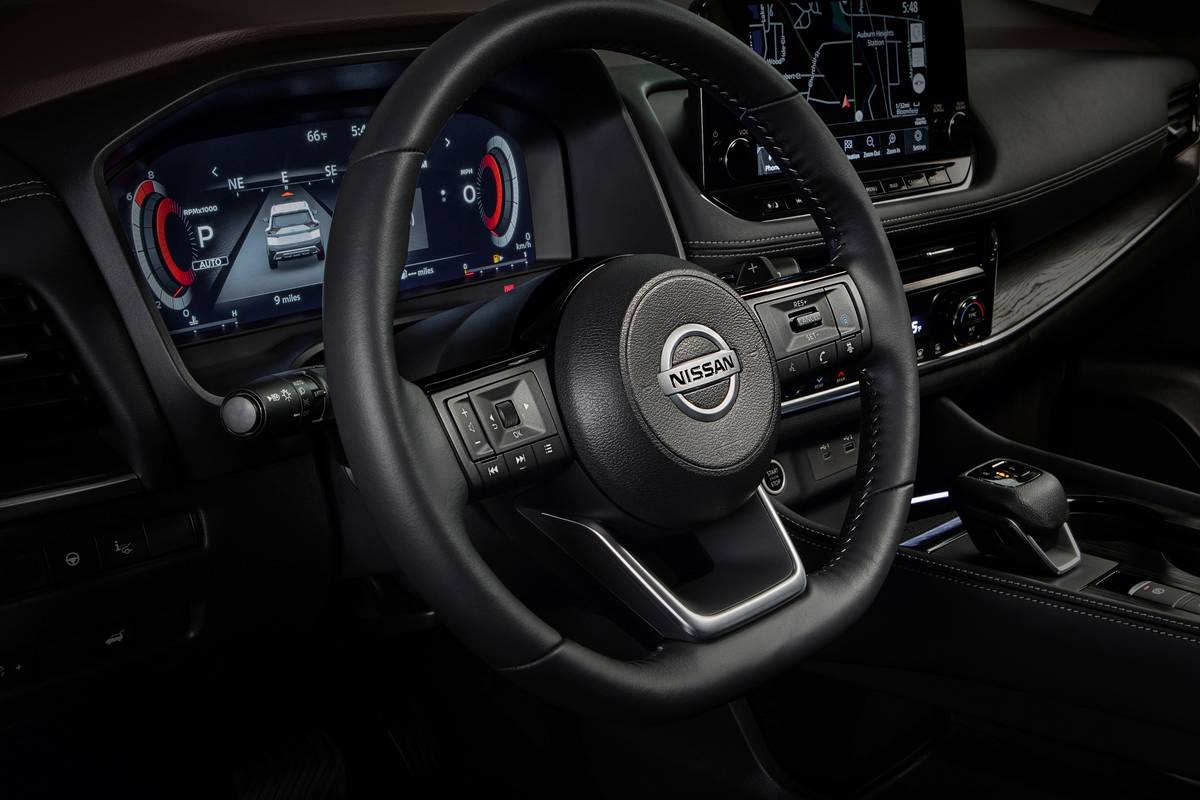 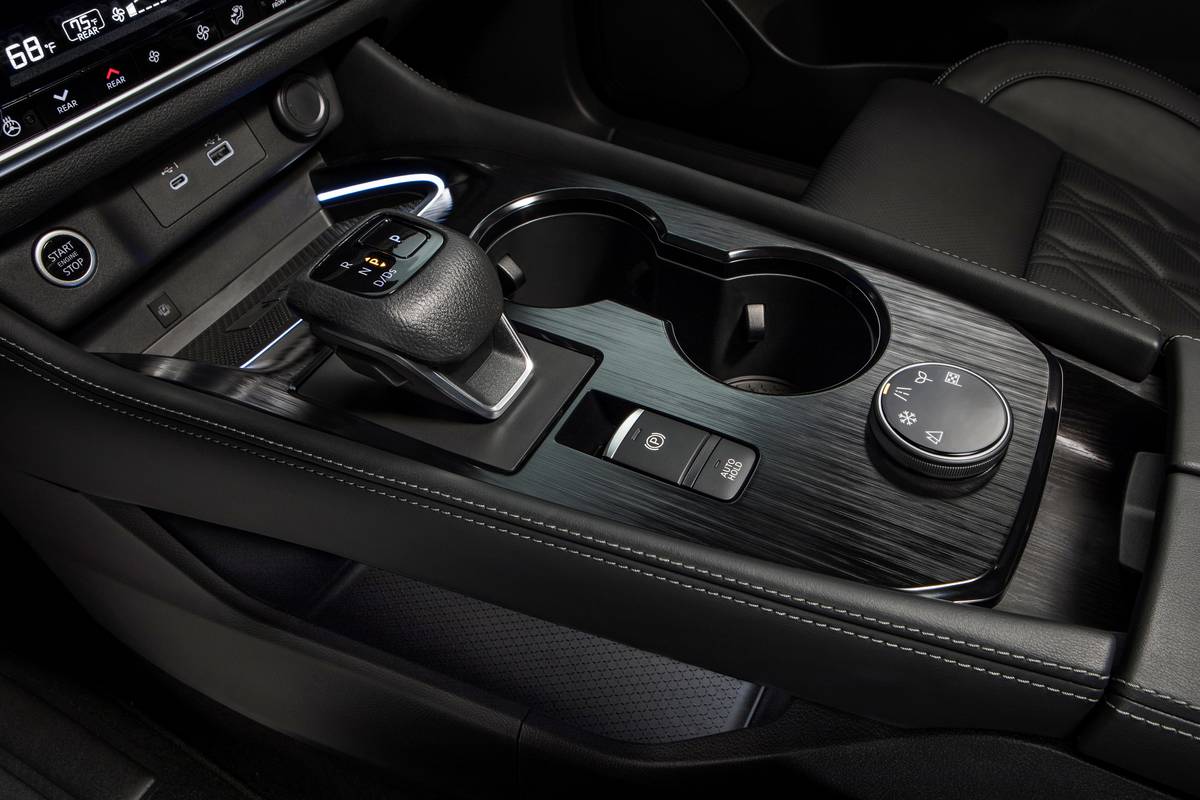 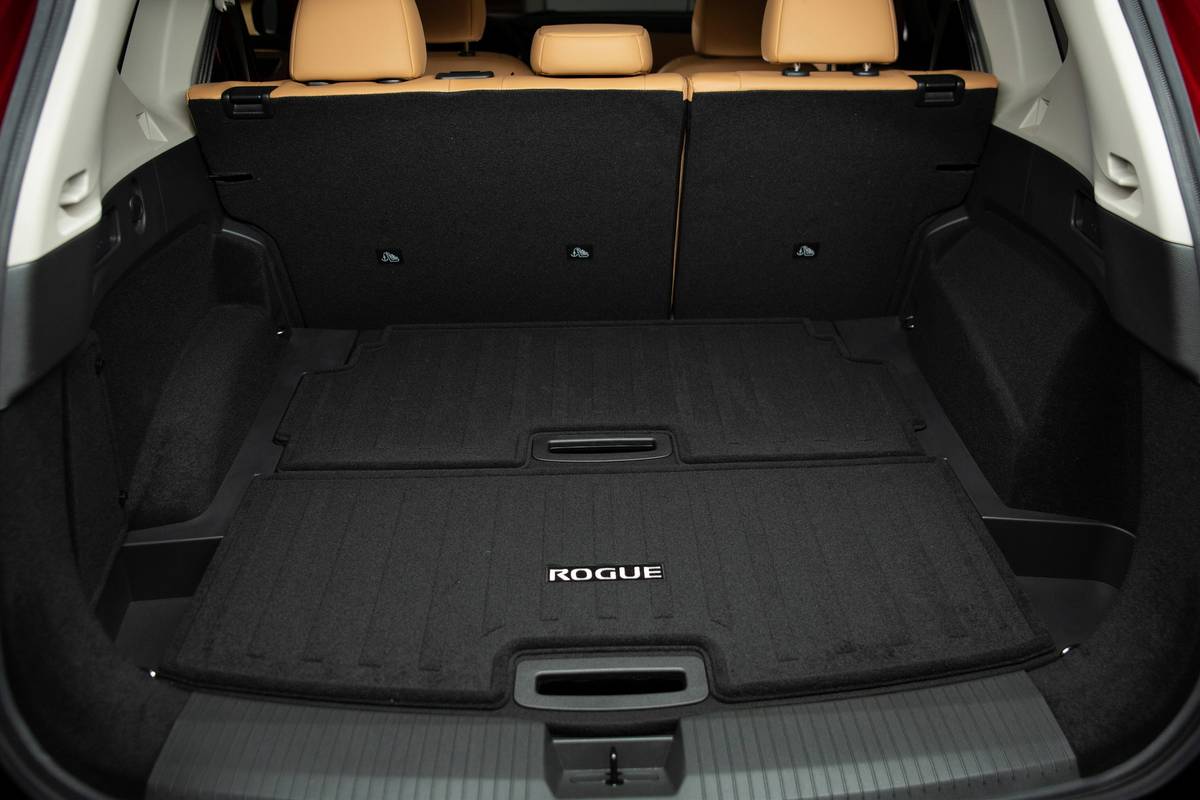 Nissan is embarking on a sweeping redesign of its business and its vehicles, and the latest one has just been shown to the world: the new 2021 Nissan Rogue SUV. Sitting on a new platform versus the old Rogue, the new one is 1.5 inches shorter and a hair lower than before, and it features new styling, a more powerful engine and an increased focus on serving families with more advanced entertainment, comfort and safety technologies.

The look of the new Rogue is a definite departure from the outgoing model and continues the trend toward blockier, edgier styling from the Japanese automakers (see the latest Toyota RAV4) just as the Americans seem to be going more carlike and jellybeanish (see the new Ford Escape). It takes its styling cues from the X-Motion concept car shown at the 2018 Detroit auto show.

Nissan’s V-Motion grille is present up front, as are standard divided LED headlights, with the actual headlights lower on the front end and the upper bits serving as daytime running lights and marker lights — similar to how the current Hyundai Kona and previous-generation Jeep Cherokee do it. LED foglights will be standard on the two top Rogue trim levels.

The family “floating roof” treatment finds its way to the Rogue, while new front and side styling is more aerodynamic, meant to manage airflow under the vehicle and down the sides more effectively, and includes the use of active grille shutters to control airflow into the engine compartment. Nissan says that the SUV will come in a wide range of colors, including five new two-tone color combinations, a Rogue first.

The biggest news lies inside, where Nissan says a new “family hub” design idea has been the focus for the new Rogue — with the idea of bringing a lot of the front-seat creature comforts into the backseat area. But the improvements don’t really seem to do much other than bring the Rogue up to the standards offered by other automakers’ SUVs.

For instance, the new Intelligent Key system now allows the rear doors to be unlocked by touching a button on the rear door handles, not just the front ones. The rear doors open almost 90 degrees, making it easier to get in and out or install a child’s car seat. A split “butterfly”-style center console door allows people in the rear seats to get things out of the console.

Remote engine start with a climate control function is now optional, as well. That climate control is now a three-zone system, allowing for driver-, front-passenger- and rear-seat temperature control zones, while optional sunshades can be pulled up from the rear door window sills. Also new for 2021 is a motion-activated hands-free tailgate, allowing access to the Divide-n-Hide cargo storage system.

On the technology front, the Rogue will receive three new displays inside. A first for the Rogue will be an optional 10.8-inch full-color head-up display — among the largest in the class — that will display a variety of information. Below that, a standard 7-inch digital display (up from 5 inches previously) augments the gauges, or it can be upgraded to a 12.3-inch digital dashboard that replaces the traditional gauges entirely.

The newly available floating tablet-style touchscreen is, Nissan says, the largest in its class at 9 inches and will come with available wireless Apple CarPlay (though not immediately at launch). That enables occupants to put their smartphone into a wireless charger and still have full functionality for CarPlay. Google Maps and Waze will be offered through the native multimedia system, according to Nissan, and Android Auto and Amazon Alexa will also be supported, though not wirelessly like CarPlay.

If you like your compact crossovers to be a little fancier than average, the Rogue will be adding a new Platinum trim level to the top of the range, featuring semi-aniline leather, a stitched dash, a Bose 10-speaker premium audio system and more.

The suspension has received a major redo with this new platform, now featuring a new multilink rear suspension, upgraded steering and a more rigid front suspension subframe — all of which should contribute to improved handling and driving dynamics as well as reduced interior noise levels. A new drive mode selector allows the driver to choose between several different settings (Standard, Eco and Sport on front-wheel-drive models, plus Off-Road and Snow for AWD versions).

The Rogue should even get better fuel economy than before. According to Nissan. it’ll deliver a 1-2-mpg improvement and up to 35 mpg highway depending on trim and equipment.

Nissan’s semi-autonomous driving system, ProPilot Assist, also gets some upgrades for 2021. It now features a tie-in with the vehicle’s navigation system to use map and GPS data to predict upcoming terrain, road and speed changes, and adapt the vehicle’s speed automatically if the driver allows it (the feature can be turned off if you don’t want the cruise control automatically slowing you down as the local speed limit changes). The system has also seen upgrades to its braking performance, lane-centering function, lane marker recognition and camera equipment to better deliver a smoother driving performance when the car has taken the wheel for itself. Traffic jams should be more tolerable, too, as the system now allows for 30 seconds of idling stationary in traffic (instead of the previous three seconds) before requiring the driver to press the accelerator to reactivate the system.

The 2021 Nissan Rogue’s pricing will be announced closer to the on-sale date in the fall, but Nissan says that most figures won’t be terribly different from what they are today — with one exception. Trim levels are similar, with S, SV and SL levels, offering Premium Packages with additional content on the SV and SL. But the top model will be pricier with the addition of the Platinum model, according to Nissan, as it will offer content and amenities typically found on premium-brand crossovers, not mass-market ones.