See all 38 vehicles from this dealership.

This seller has been on Cars.com since April 2016.
The Halterman's Family has been in the Automotive industry since 1964. In 1966 we acquired the Toyota franchise and throughout the years had many other brands and models.In 2011 we acquired the Mitsubishi franchise. If you stop down today you will still find Mr. Halterman and his son Keith working at the dealership. We have a friendly staff and pride ourselves on delivering a truly exceptional experience. We also offer to all our customer fresh baked cookies and coffee while they wait for service or their new car. If you haven't visited us now is the time!
You're Gonna Like It Here! 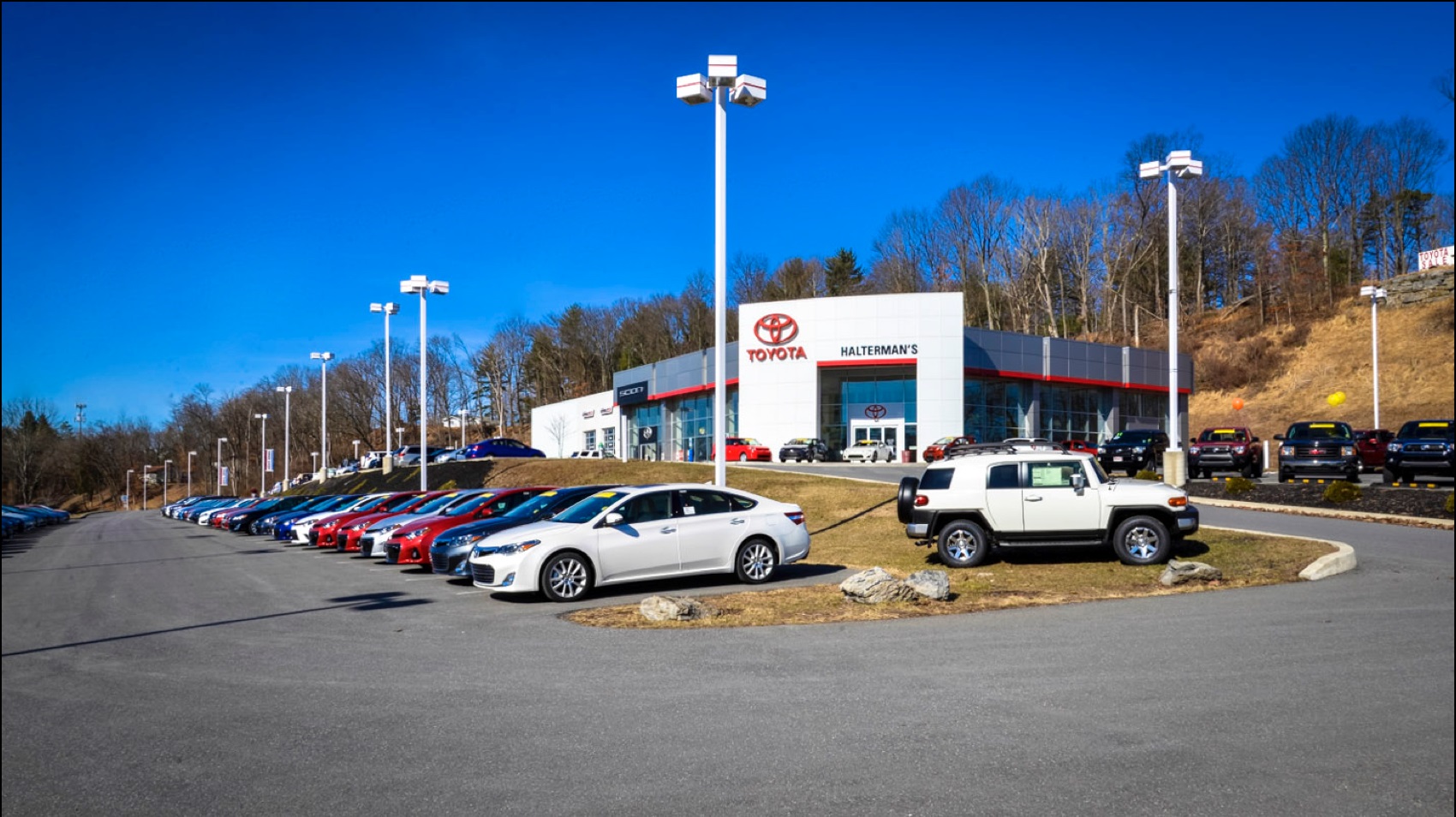 May 7, 2022
By Dan Raiciulescu on DealerRater

Wonderful experience,Eric was a great help ,very polite knowledgeable,patient,would recommend him to all new and undecided costumers;same great service and help from the financial department. Definitely will use their help for our next time when buying another car,best dealer in the area! Dan Raiciulescu

Hi Dan, thank you for your kind review; we are happy to pass along your comments to the team here at Halterman’s Toyota! We hope to see you soon!

Unprofessional dealership, and very rude and

Unprofessional dealership, and very rude and disrespectful salesperson. To try to take advantage of a 75 year old man who drove 1 hour, because he was told the vehicle he was interested in was available, is a disgrace. Rodney wouldn’t even explain where his price came from, and would not give us an appraisal on our trade. Shame on him and the dealership. Awful, awful place.

If you are going to tell a story through a negative review then let's at least introduce the facts. 1. You wanted $26,000 for your trade. This is $1,000 over retail asking price. Many other dealers are currently selling vehicles just like your trade in for around $24,000 to $25,000. Not sure how you are upset with us for not wanting to pay you more than retail for your car. 2. Even if you were given $26,000 for your car, your payment would still have been around $440 per month when you stated your budget was around $320. Just because the math does not work out to where you wanted to be, does not mean we did something wrong or unprofessional. 3. The fact that the vehicle you originally came in on was in the process of being sold when you got here is beyond our control. Cars are available on a first come, first serve basis and Rodney even pointed out the customers that were buying the vehicle to you when you were here so you would know we weren't playing games.

To whoever wrote this response, unless you were the one sitting in the cubicle, don’t assume to know what was said, or how it was said. Again, your response shows how truly unprofessional your establishment is. Rodney came back with one offer only, $501. He never mentioned how much the trade was appraised for, nor did he show us any type of numbers to work with, however, he was asked multiple times to do so. Also, that ridiculous trade value we had, was given from another dealership, and shown on Kelly Bluebook. I’ve never been to a dealership where they didn’t, at the very least, sit down with a potential buyer, and show them a break down of some type of offer. To just say, our best is $501, and not even show us how that number was arrived at, is ridiculous. Again, so unprofessional and disrespectful. You want to justify your salespeople and how you do business, so be it. I was there, and I’ve never heard or seen such disrespect and unprofessional people in my life. Some advice, treat people the way you want to be treated. Give respect, get it. Lastly, most consumers are not experts on vehicles, so the more thorough you are with them, like showing them numbers, the much more insightful and better off you’ll be. Thank you.

Excellent with keeping me up to date with my loan status.

Excellent with keeping me up to date with my loan status. They did whatever it took to keep fighting for me to get in a new car. No hashing prices, very fair, and truthful. (which is rare in a dealership.) I actually left happy, didn't settle, and didn't get forced in a car I didn't like.

We're so happy we were able to help you out! If you have any further questions, please give us a call. We're always happy to help!

As always Excellent Service!!! Melissa always provides Excellent Customer Service and is prompt to help with any questions!!! Thank you so much!!!

I HAD A GREAT EXPERIENCE WITH HALTERMANS. I DEALT WITH...

I HAD A GREAT EXPERIENCE WITH HALTERMANS. I DEALT WITH RODNEY, DAVID AND TAMMY AND THEY WERE ALL VERY HELPFUL AND SUPER NICE. I DROVE FROM 10 HOURS AWAY SO THEY GOT ALL MY PAPER WORK DONE AND GOT ME OUT THE DOOR VERY QUICKLY. THE DEAALERSHIP IT SELF WAS VERY NICE AND CLEAN. I HIGHLY RECOMMEND ANYONE TO GO PURCHASE A VEHICLE FROM THEM. VERY HAPPY WITH MY PURCHASE!!!

Hi Brian, your wonderful feedback and rating mean a lot to us. Thanks for taking the time to leave us this information about your recent visit. Take care!

Freddie was haggle free, to the point and really helped...

November 30, 2021
By emgutierrez on DealerRater

Freddie was haggle free, to the point and really helped me out! Appreciate his expertise! It was my first time purchasing a vehicle and he broke down the numbers for me to understand.

We appreciate your positive review about your recent experience with us! Thank you so much for your feedback! We hope you have a great day!

This was the easiest & fastest car buying experience I...

November 28, 2021
By Phil&Kaitlyn on DealerRater

This was the easiest & fastest car buying experience I have ever had! James was pleasant and very knowledgeable. He made us feel very welcome and knew what we wanted from the start so he made the process very quick & easy. I highly recommend this dealership & James!

Hi Phil & Kaitlyn, thank you so much for your positive comments about Halterman's Mitsubishi! We hope to see you soon!

Joseph was very kind accommodating my and my family’s...

November 17, 2021
By Stacey Scott on DealerRater

Joseph was very kind accommodating my and my family’s schedule and putting a deal together for us. Thank you much Joseph! God bless

Thanks for your praise and kind comments about our team. If you ever need anything else from us, please feel free to give us a call or stop by. Have an awesome day!

Poor customer service With an bad attitude, is bad

So disappointed by the service provided and the response of the service person M.M ,however when you told this is what needs to be done and what the cost is, in good faith , you agreed . Needless to say, that was not the case , and then having her behaving and acting like she was doing me a favor ,after charging so much and to tell me this is the last time I get a discount , really, if anything was taken off is because when you spend x amount , they take off a few bucks off , she did go out her way for me as puts , I came to your shop because the business says that’s what they do . Hopefully in the near further it’s get better .

When your car was in for service it was discovered that some items, including add on accessories needed to be repaired. The Service Advisor spoke with the technician and convinced him to fabricate the needed parts to make the repairs. The advisor also had the technician do the repairs and only charged you for half of the required time to make the repairs. The advisor also did apply a large discount to the remaining service work that was done. The overall discount was much more than “a few bucks” We apologize if you feel you did not receive the service that you were accustomed to. We will review this situation and I am sure we can exceed your expectations on the next service visit.

Sales Consultant ERIC Mc NICHOLAS WENT ABOVE & BEYOND IN...

October 5, 2021
By ipdepeza on DealerRater

Sales Consultant ERIC Mc NICHOLAS WENT ABOVE & BEYOND IN ASSISTING ME IN PURCHASING MY TOYOTA COROLLA. HE IS VERY PATIENT, POLITE, PLEASANT, KNOWLEDGEABLE & EFFICIENT. I WILL HIGHLY RECOMMEND BOTH ERIC & FINANCIE OFGICER TAMMY, TO MY FAMILY, FRIENDS, CO- WORKERS & THE PUBLIC AT LARGE. IT WAS A DELIGHTFUL PLEASURE DOING BUSINESS WITH HALTERMANS THROUGH THIS AWESOME TEAM GOD BLESS