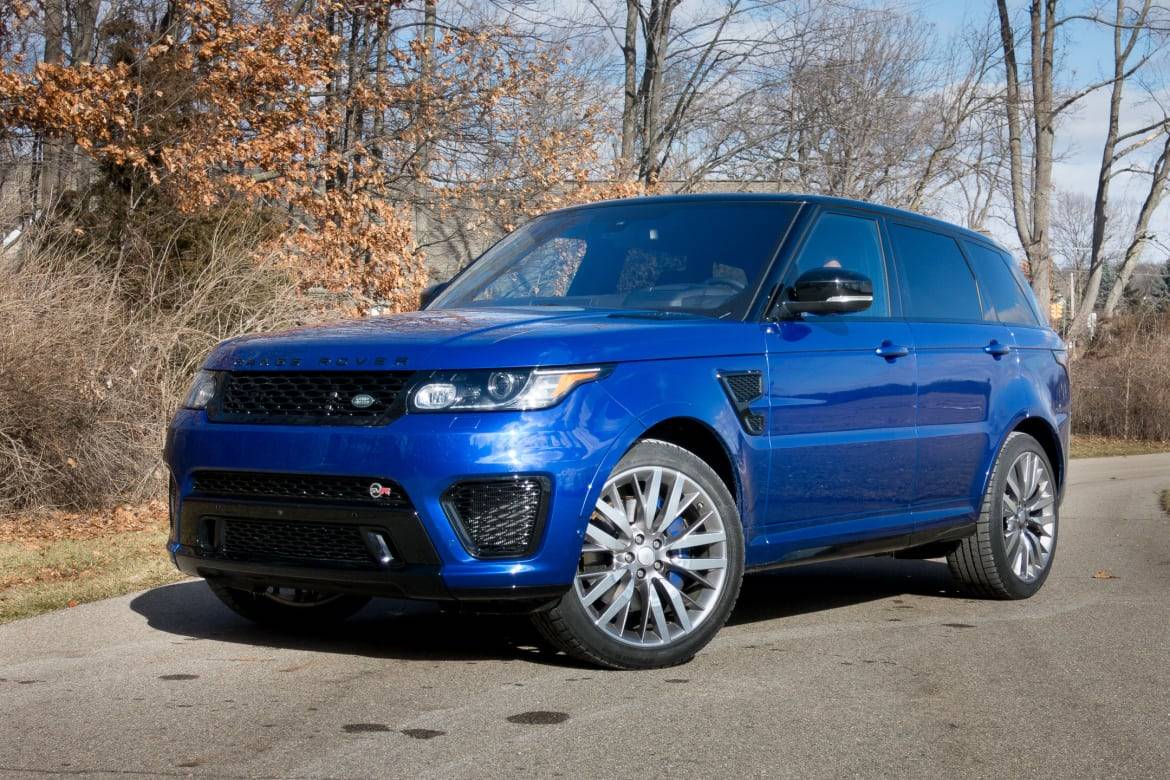 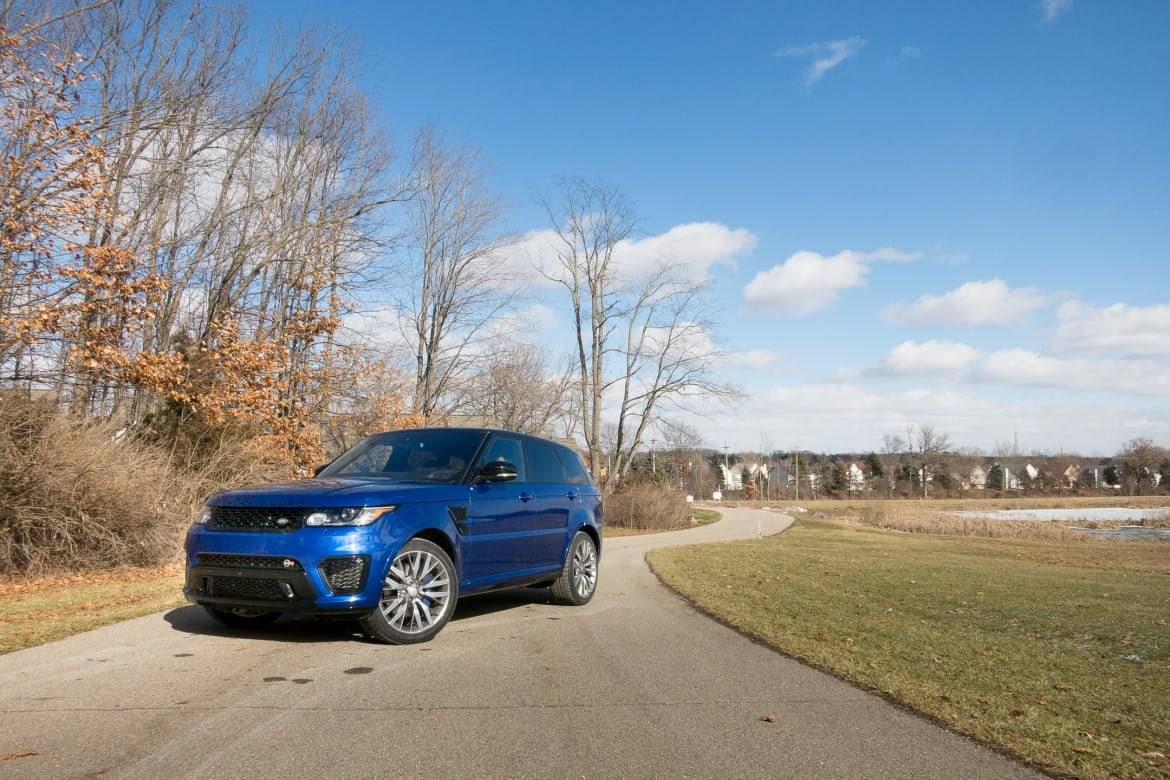 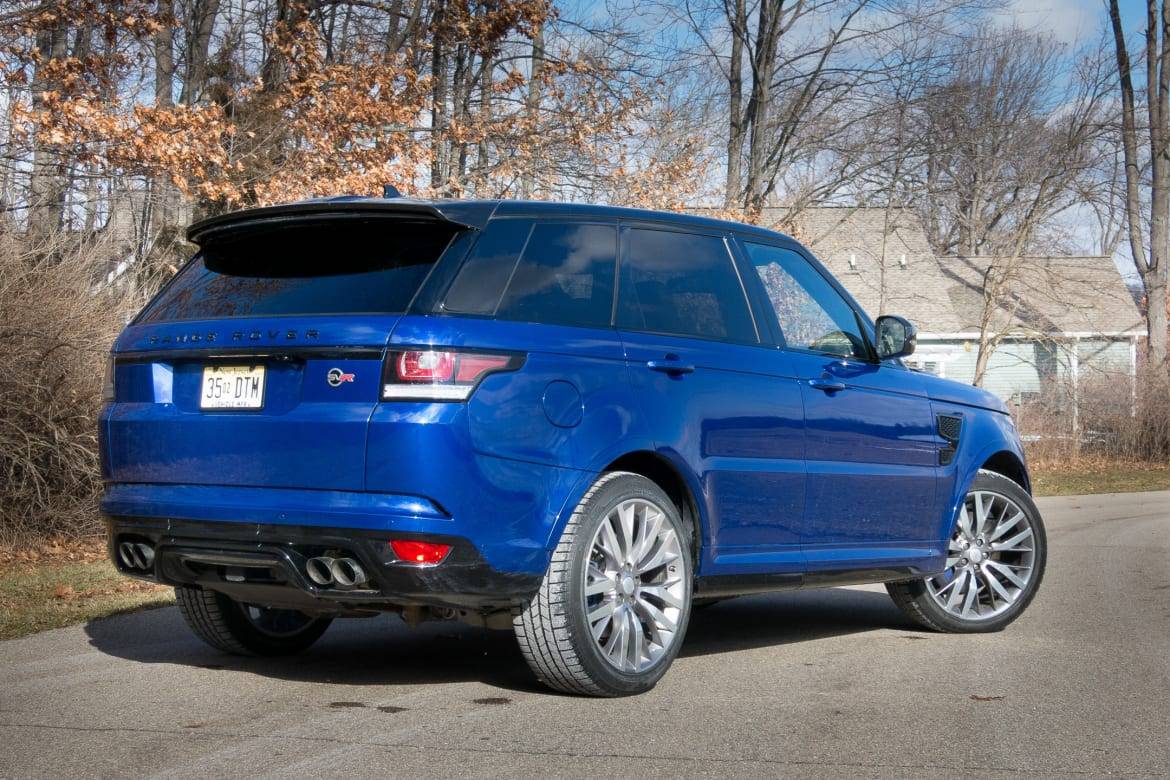 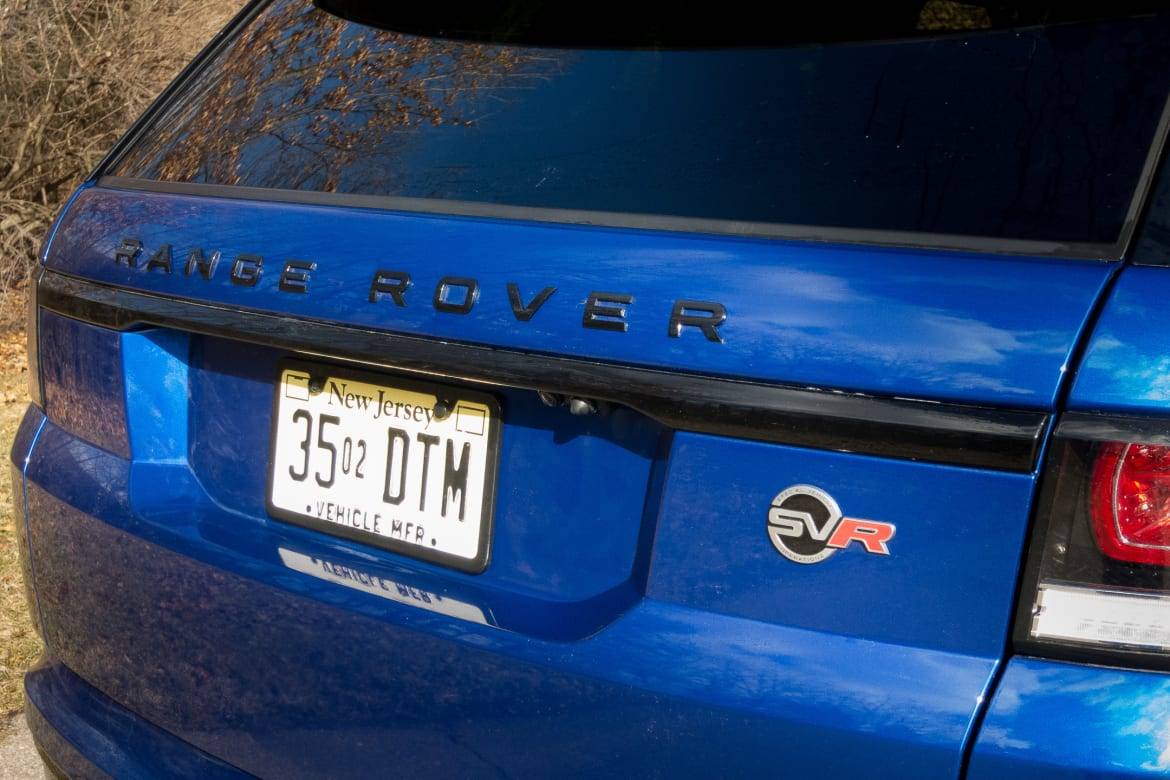 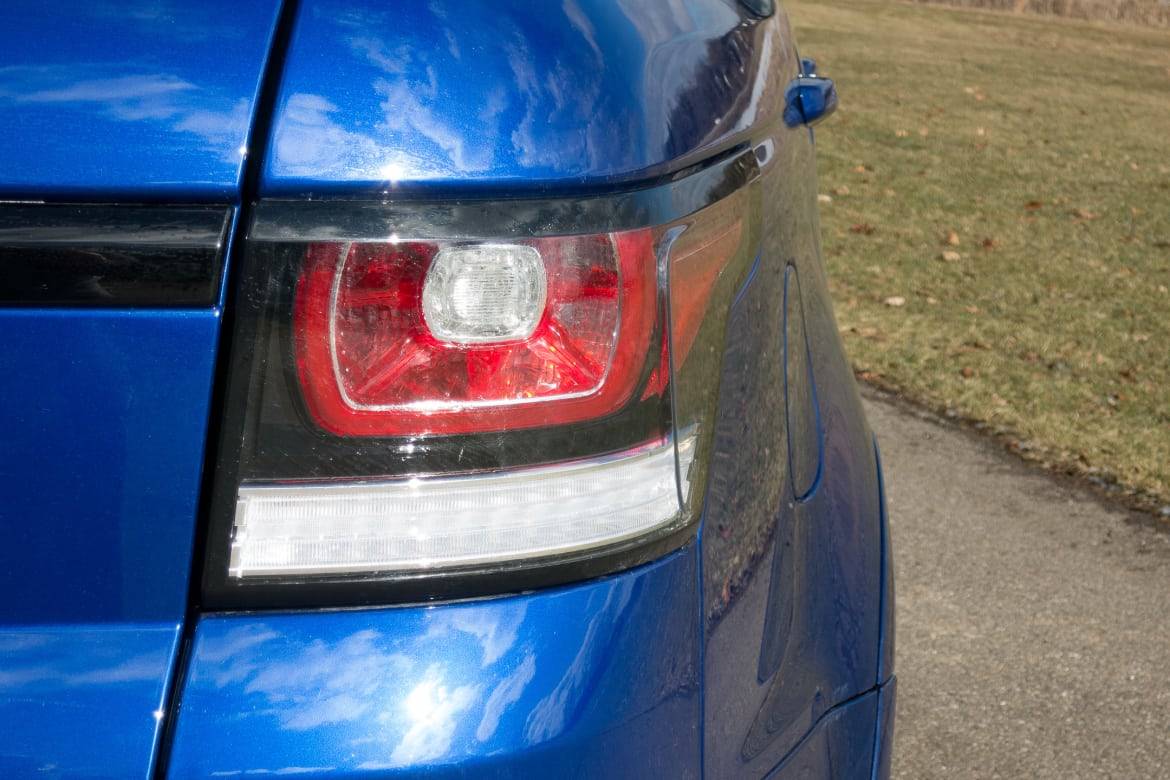 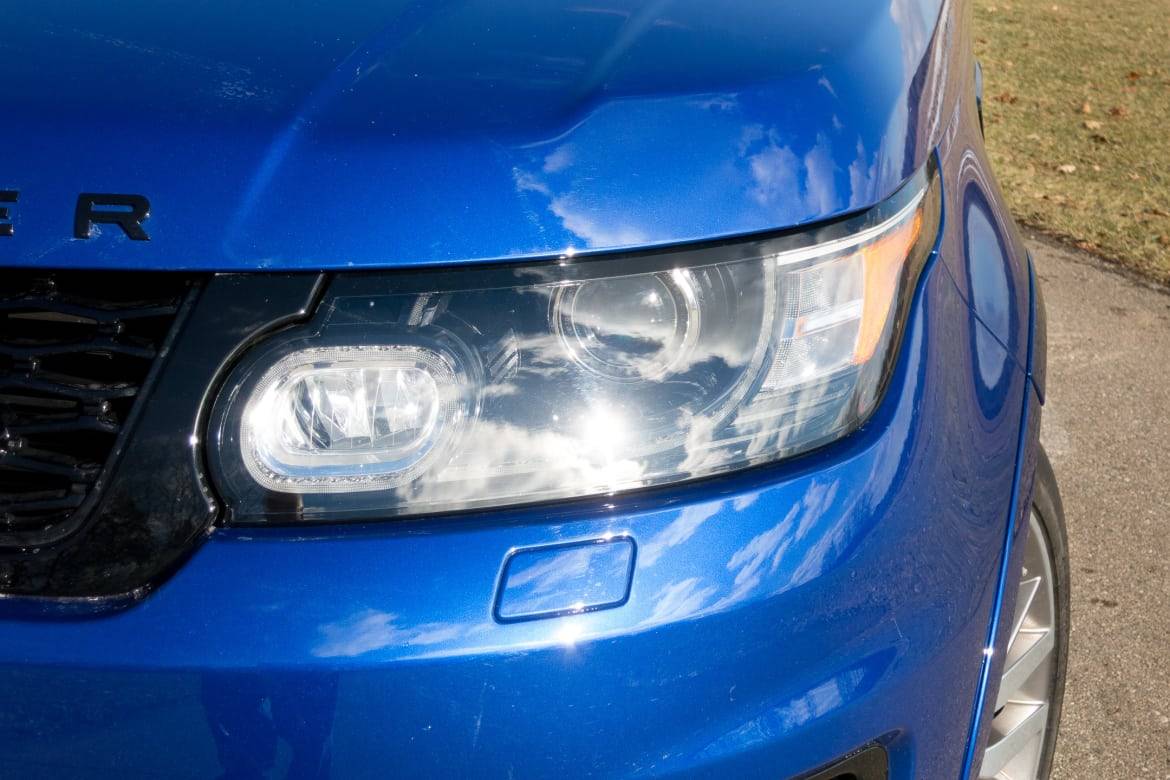 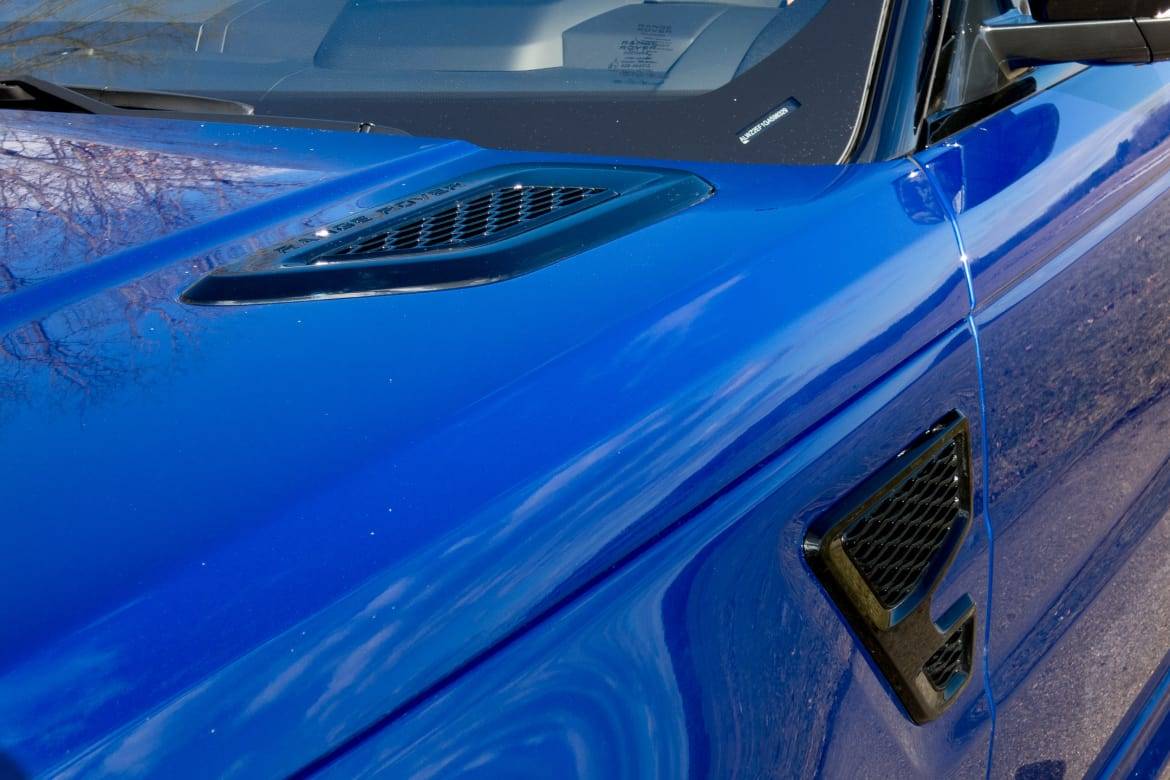 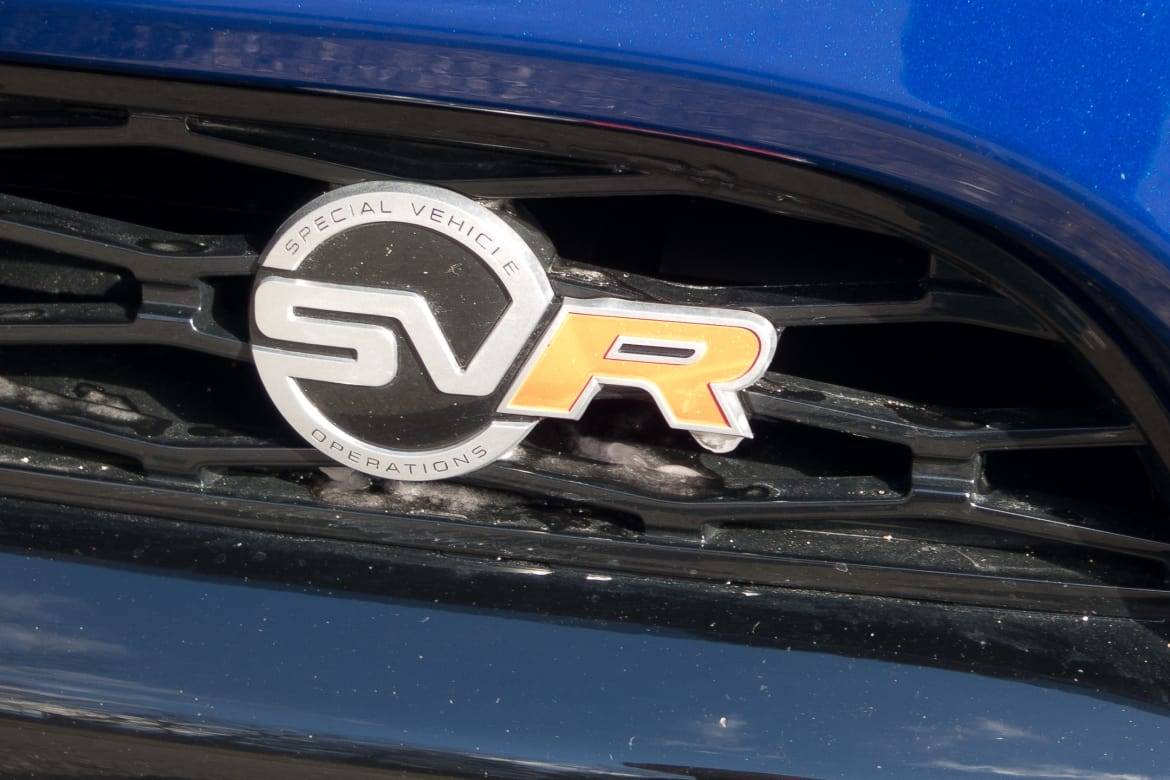 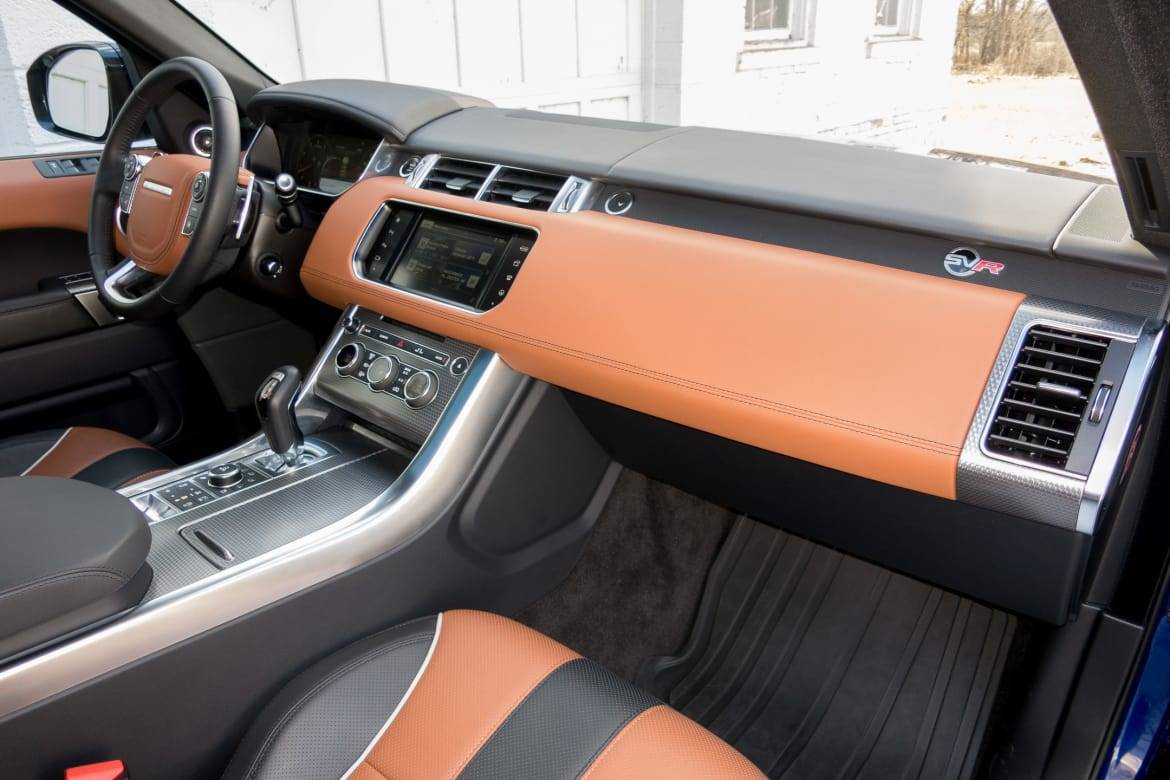 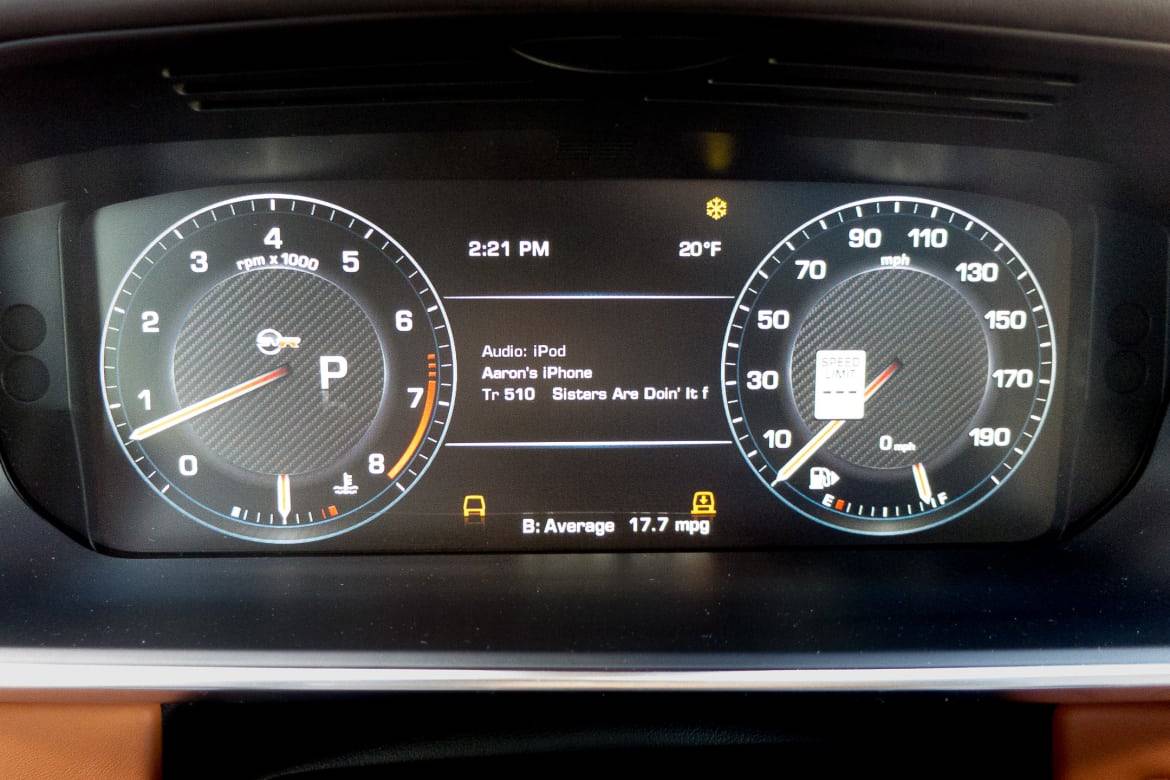 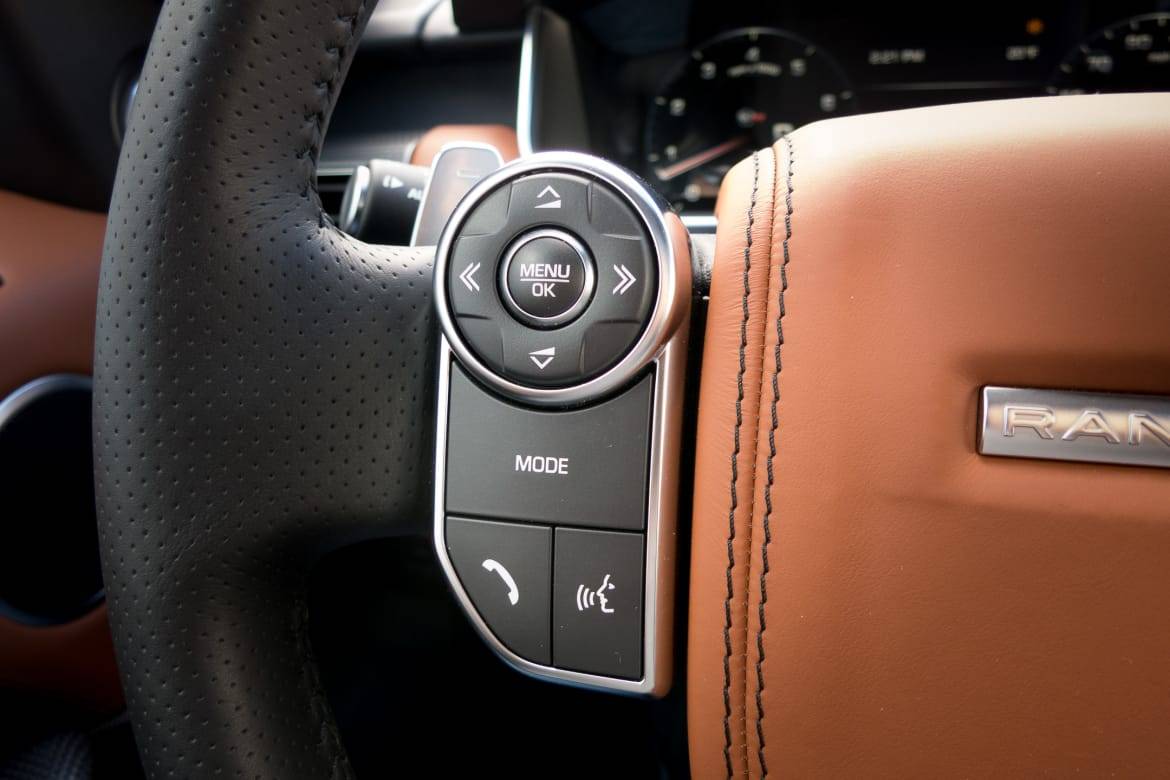 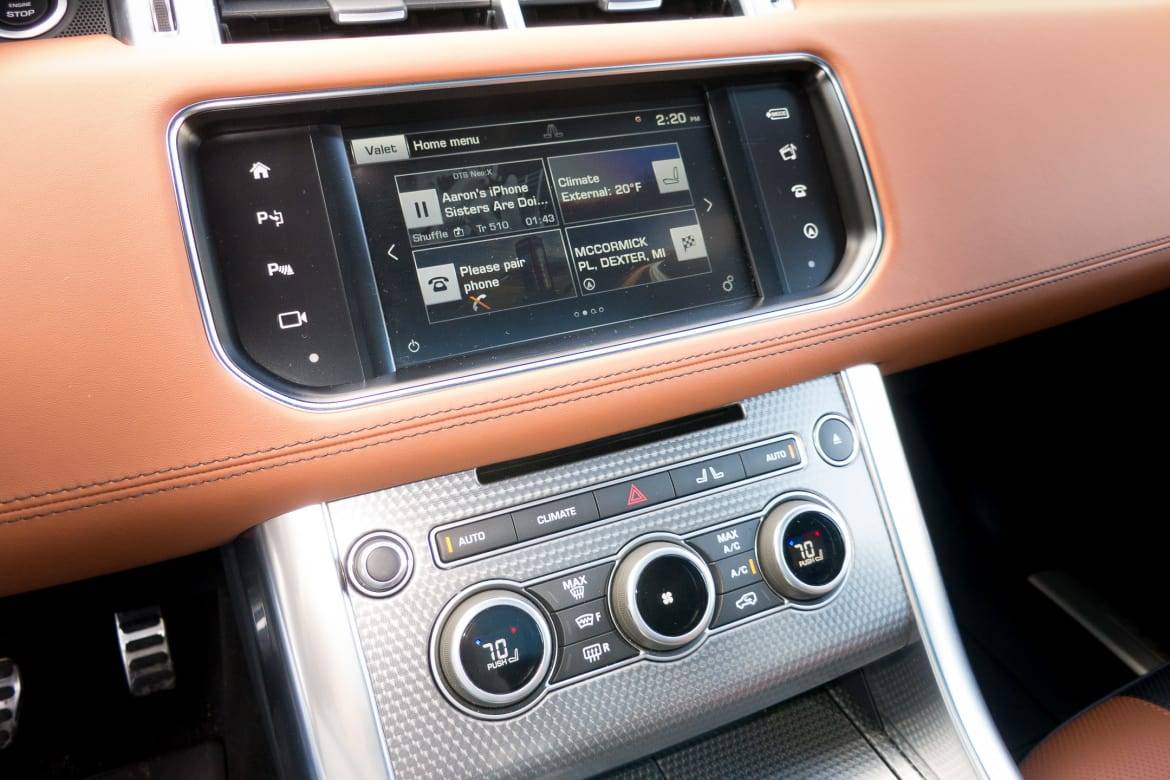 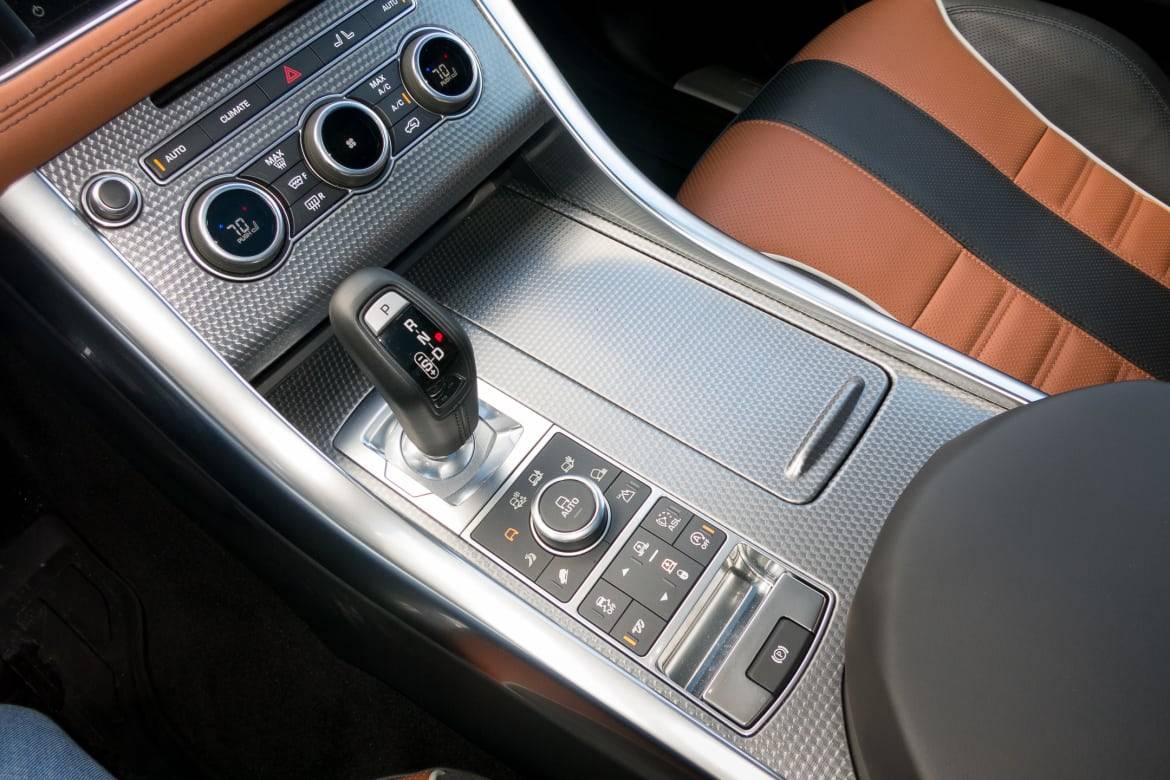 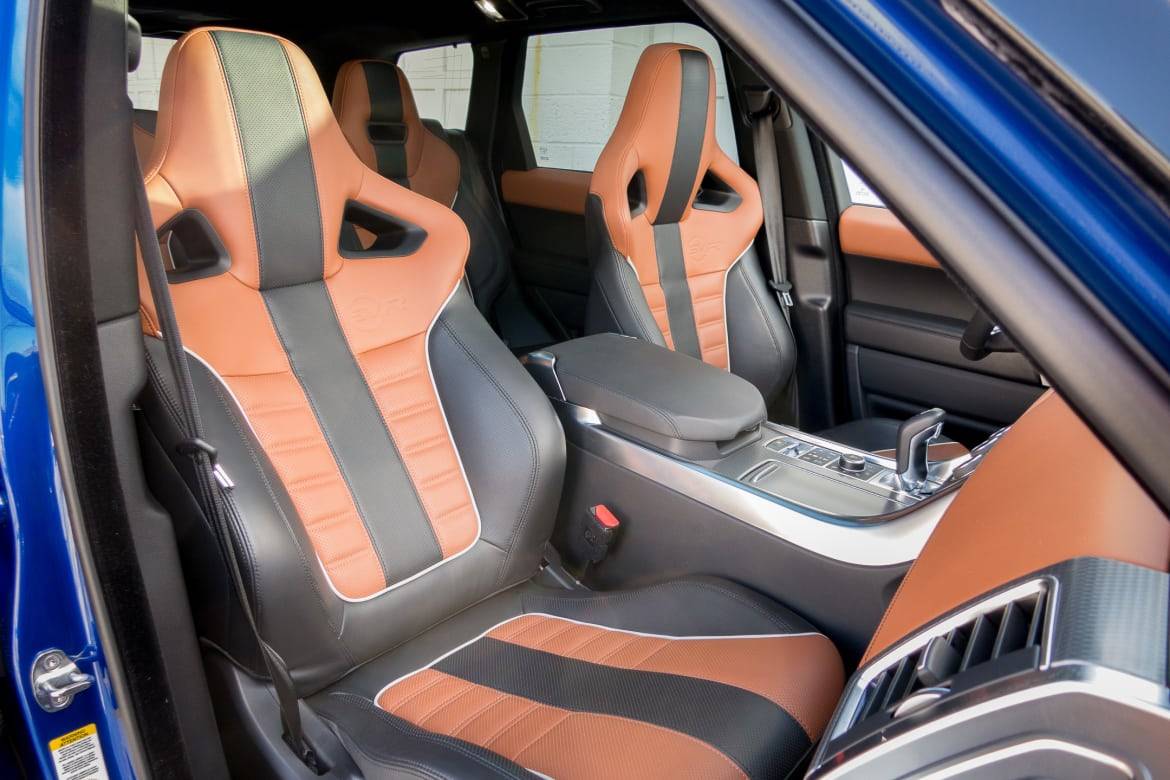 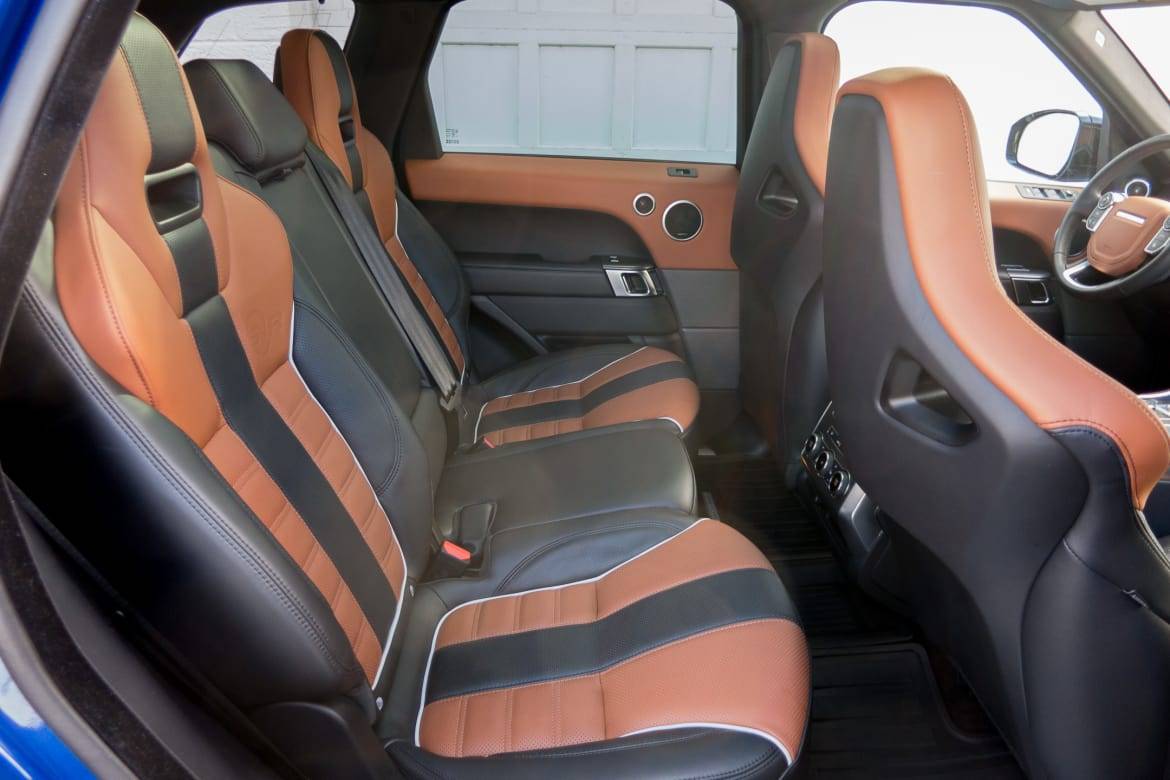 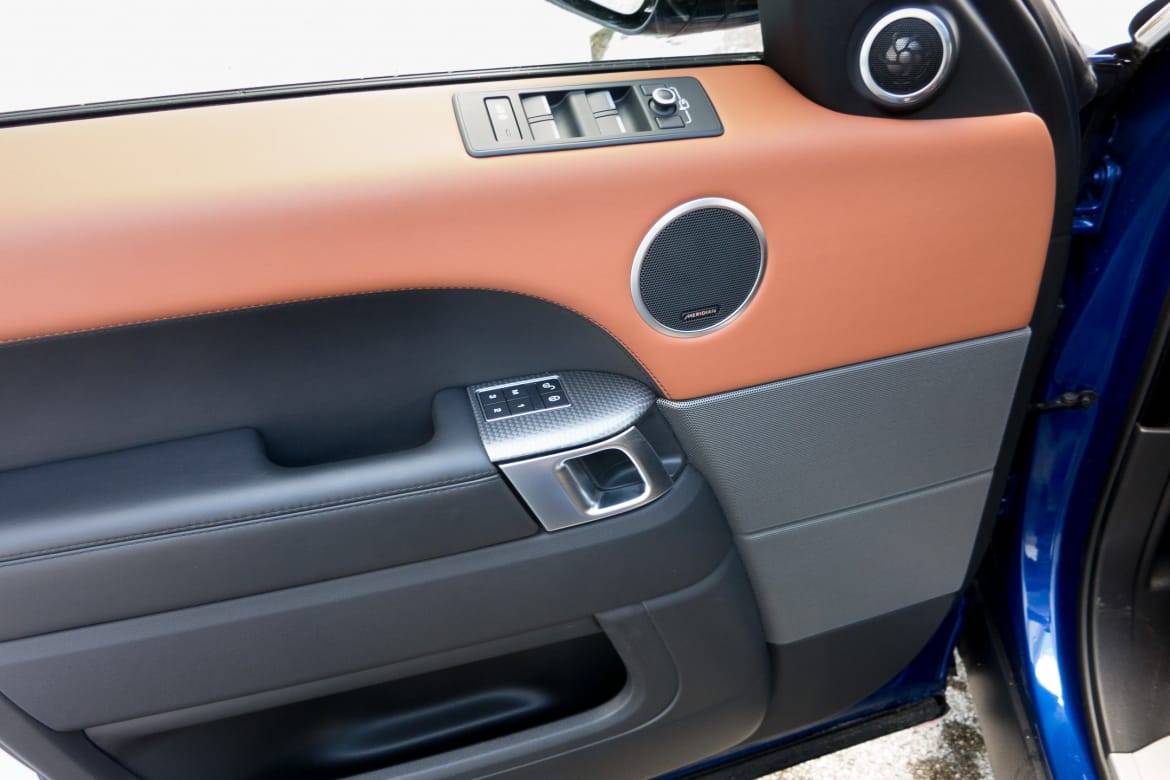 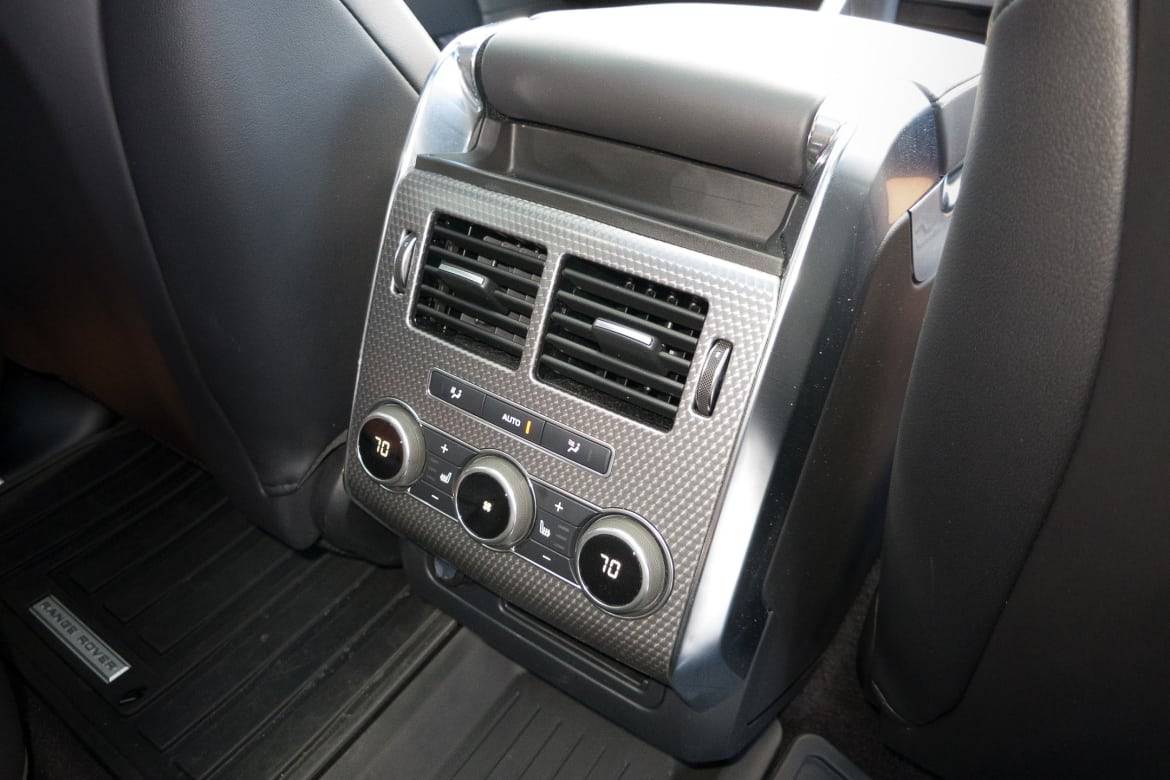 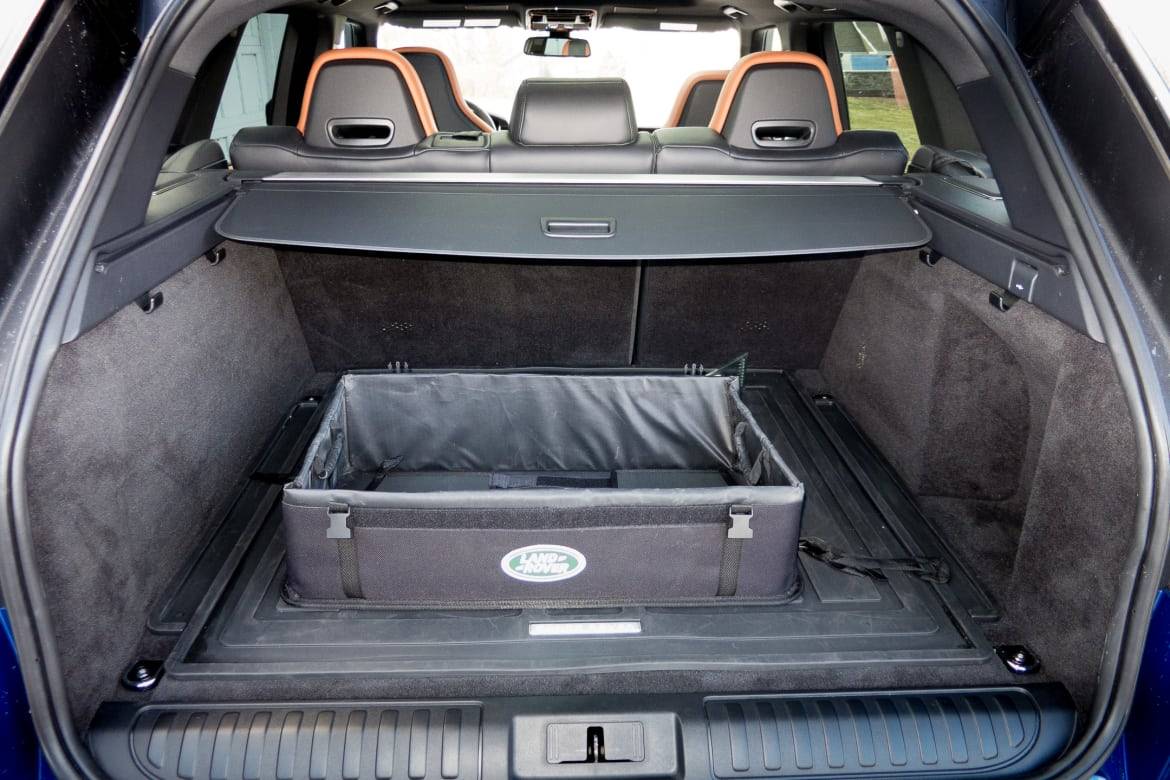 British automaker Land Rover likes to add names to its names. Consider this beast:  the Land Rover Range Rover Sport SVR. “Land Rover” is the brand, and “Range Rover” has become something of a sub-brand, consisting of the big daddy Range Rover, the smaller Range Rover Sport, the upcoming Range Rover Velar and the diminutive Range Rover Evoque. A confusing naming strategy, to be sure, but a fairly clearly delineated lineup of vehicles. The more affordable and slightly smaller Sport is a step down from the full Range Rover and is meant to be more of an on-road, sporty sport utility vehicle. And it’s made even more potent in its SVR trim level.

The SVR is meant to go up against similar performance SUVs like the BMW X5 M, the Mercedes-AMG GLE63, the Maserati Levante S and the Porsche Cayenne Turbo, and it’s priced into the rarified air those other trucks breathe. Compare those four models here.

Unique front and rear styling with more aggressive scoops and bumpers distinguish the Sport SVR from lesser Land Rover Range Rover Sport models. Our Estoril Blue model was stunning with its two-tone paint — black roof and pillars and bright azure down below. It’s a classy, head-turning combination, but not one that screams at you from the country club parking lot. Whether it looks different enough from the standard Sport Supercharged is a matter of debate; suffice it to say its subtle good looks will set it apart in a crowded field, but not in a field crowded with other Land Rovers.

The all-wheel Sport SVR is even more exciting to drive than it is to look at. It’s powered by a supercharged 5.0-liter V-8 making 550 horsepower and 502 pounds-feet of torque. That’s 40 hp more than the regular Range Rover Sport 5.0L V8 Supercharged, and a substantial upgrade from the base Range Rover Sport’s 3.0-liter turbocharged V6 (SE or HSE trim) or the alternative 3.0-liter turbocharged diesel V6 (SE Td6 or HSE Td6). All engine options are aired to an eight-speed automatic transmission. See all three gas versions compared.

The SVR’s power comes on strong. It’s tuned to be more aggressive than the normal Range Rover Sport Supercharged, and power builds with a crescendo of sound that feels decidedly un-Land Rover. This is no stately, sedate cruiser meant to bring the polo competitors to the field. This is a rig that tackled the famed German Nurburgring racetrack in a little over eight minutes — a ridiculously fast time for a big, heavy SUV. Such are the Sport SVR’s capabilities thanks to a firmer suspension, a more aggressively tuned ZF eight-speed auto transmission, excellent brakes (Brembos up front) and a four-wheel-drive system that’s also been adjusted to handle the SVR’s additional athletic abilities.

The result is a big, heavy SUV that doesn’t feel as tipsy as lesser Range Rover Sport trims thanks to its more sport-tuned suspension. You’ll never forget it’s hauling around a lot of bulk, but it’s also athletically inclined and the eight-speed loves to dance. Steering feel is excellent, the brakes are strong and that head-snapping acceleration — accompanied by an ungodly bellow from the V-8 engine — really delivers on the performance promise of the SVR badge.

As you might imagine, fuel economy in such a beast isn’t stellar — nor is that a consideration when making such a purchase, truth be told. If you want to spend a lot of money on an SUV that can blast through the quarter-mile and still get great efficiency ratings, consider a Tesla Model X. Otherwise, you’ll be getting 14/19/16 mpg city/highway/combined, and you’ll like it. The Mercedes and the Bimmer are as bad or worse; only the Porsche manages to turn in better numbers with its 14/21/17 mpg rating.

The interior is an interesting mix of traditional Land Rover Range Rover SUV off-road styling and Jaguar-like sports coupe equipment. The first thing you’ll notice are the two-piece sport leather seats with non-adjustable head restraints. They’re aggressively bolstered and upholstered in a wild pattern, but they’re quite comfortable, offering up plenty of adjustability despite the immobile headrests. The other thing you’ll notice right away is the use of top-quality materials throughout the cabin. There’s no cheap plastic, no fake-looking wood, no questionable material choices at all (I’m looking at you, Cadillac Escalade) for your $100,000 outlay.

The rear seats aren’t quite as comfortable, as the sport seats up front are duplicated in less extreme form in the rear. The Sport SVR ostensibly seats five people, but I don’t envy the poor schmuck who gets sandwiched between the heavily bolstered outboard rear seats. At least headroom is plentiful front and back, even with the standard panoramic moonroof overhead.

In terms of how it stacks up against its contemporaries, you’ll find similarly posh environments in the Mercedes-AMG GLE63 and Porsche Cayenne Turbo, less so in the BMW X5 M. That one tends to feel a little more businesslike and less luxurious than its fellow German competitors.

The Sport SVR’s multimedia system is easy to operate. It’s visually clear, with excellent contrast on the central touchscreen, and can be coupled with an optional 1,700-watt Meridian sound system that will rattle your brain around your skull if you crank it high enough. That amounts to 2.3 hp in the stereo alone. The thick, meaty steering wheel feels good in your hands, again thanks to high-quality leather wrapping.

Controls for the sophisticated four-wheel-drive system are on the center console, but you’re not likely to touch them much. The four-wheel Land Rover Range Rover Sport SVR has a dual-range transfer case, hill descent control and a fancy automatic Terrain Response system, which adapts how the vehicle traverses different kinds of ground, from desert sand to deep snow. Yet this thing’s mission is single-minded: Go fast on pavement. Very, very fast. You wouldn’t want to take these 22-inch performance tires on anything more slippery than the gravel driveway up to your country manor anyway.

The electronic sophistication seen in the Sport SVR’s four-wheel drive is also evident in its safety features, with standard automatic emergency braking and a backup camera, plus optional items like Lane Keep Assist, adaptive cruise control, a head-up display, and autonomous perpendicular and parallel parking.

Take Stuff With You (But Secure It Well)

Pricey, But Justifiably So

Popping down to your Land Rover dealer and walking out with a new Range Rover Sport SVR will cost you at least $112,345, including destination fee. That is indeed a lot of money, but it isn’t much more than its competitors. For this price, you get a rare, highly exclusive and immensely capable high-performance SUV that can blow the doors off just about anything that doesn’t cost this much (with one notable exception — stay tuned).

Optioned up like my test vehicle, with Estoril Blue paint, 22-inch wheels, a 22-speaker Meridian audio system, the Driver Assistance Package and more, you’re looking at a loaded sticker of more than $123,000.

But this rarified air isn’t too thin to have a number of other exclusive SUVs to keep the Land Rover Range Rover Sport SVR company. The Mercedes-AMG GLE63 S has an even more powerful engine and an equally luxurious interior for a starting price of $109,765, but the price quickly goes north as you add equipment, ending up in the same neighborhood as the loaded Sport SVR.

The BMW X5 M is in a similar situation, starting lower than the rest at just $99,795 but climbing quickly as you option it up, topping out at just less than $120,000 fully loaded. The Porsche Cayenne Turbo, meanwhile, isn’t even the most expensive Cayenne you can get; it starts at $117,550, but if you want the even more powerful Turbo S, you’ll have to spend at least $160,650. And of course, because it’s a Porsche, the options list is insane: You can option a regular Cayenne Turbo up to $200,000 including options as crazy as a $1,200 leather interior door handle.

If you love speed but want a bargain, your local Jeep dealers have a Grand Cherokee SRT they’d like to show you. It’s almost half the price of a loaded Land Rover Range Rover Sport SVR and nearly as quick, just not quite as dramatic an entrance to the high school reunion.