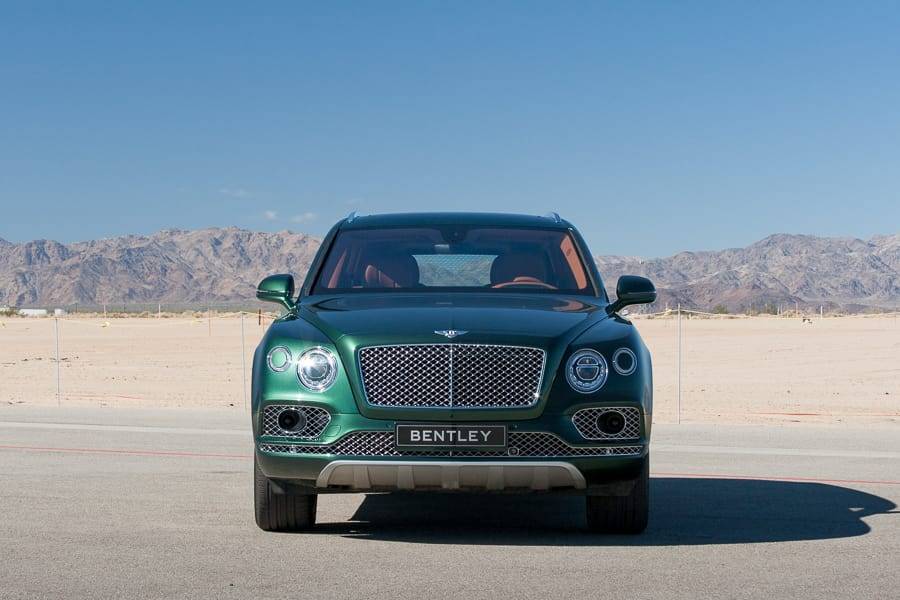 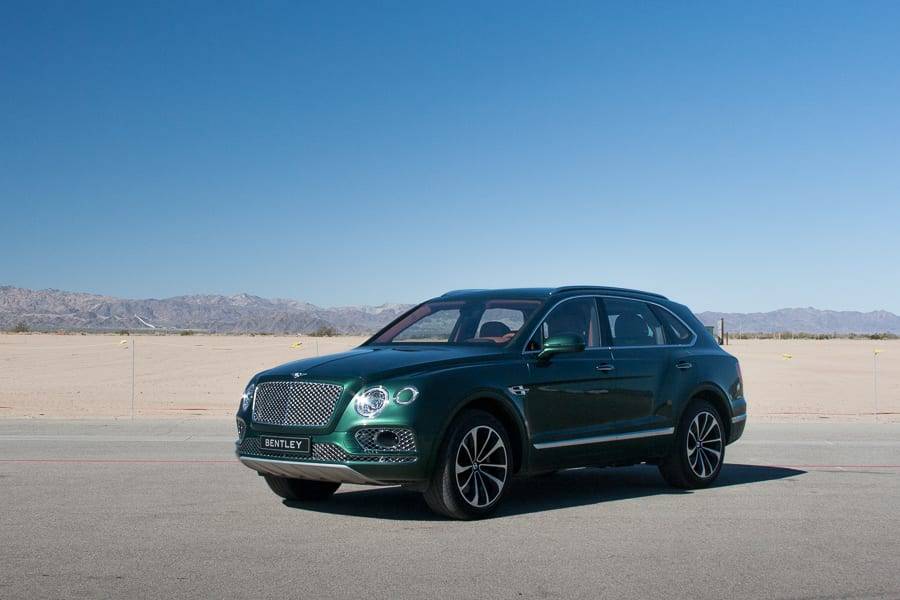 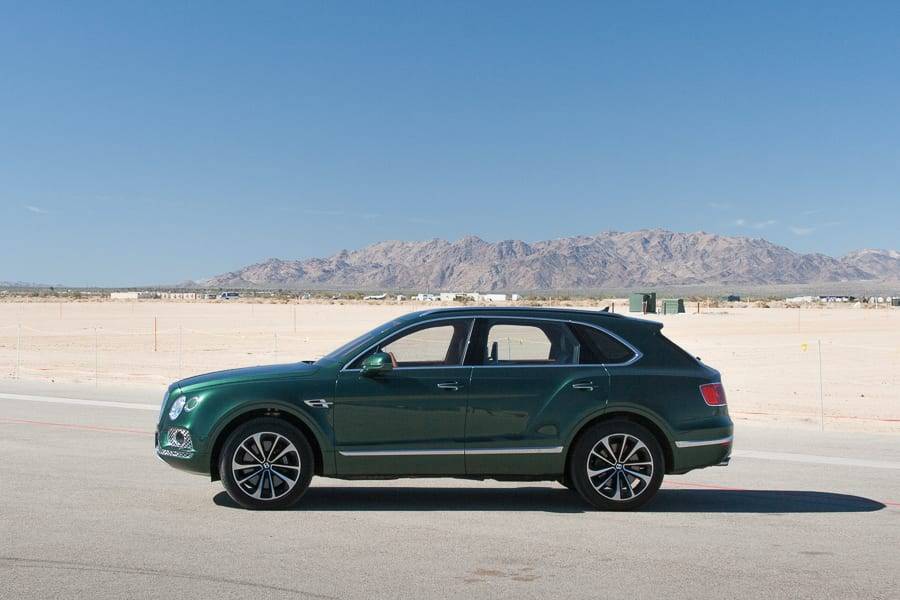 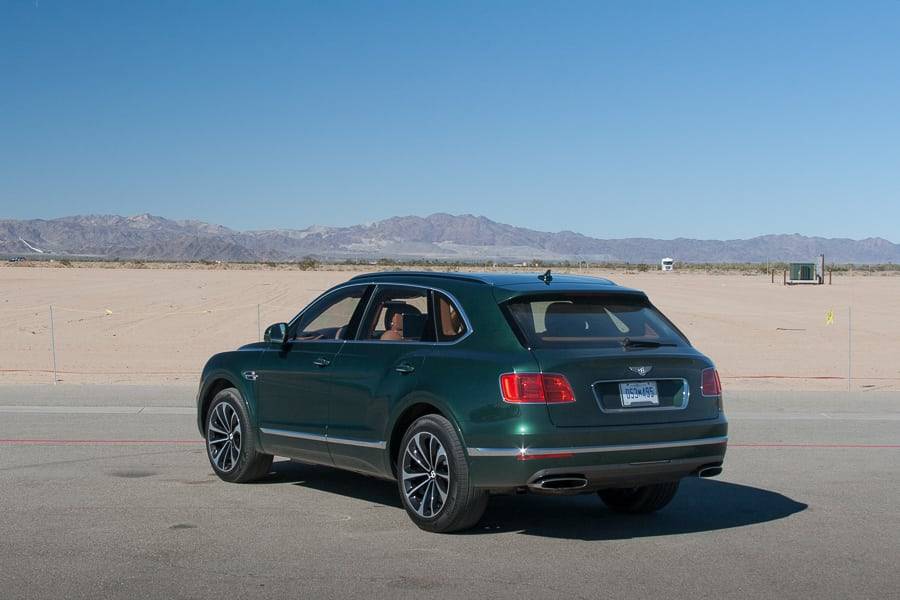 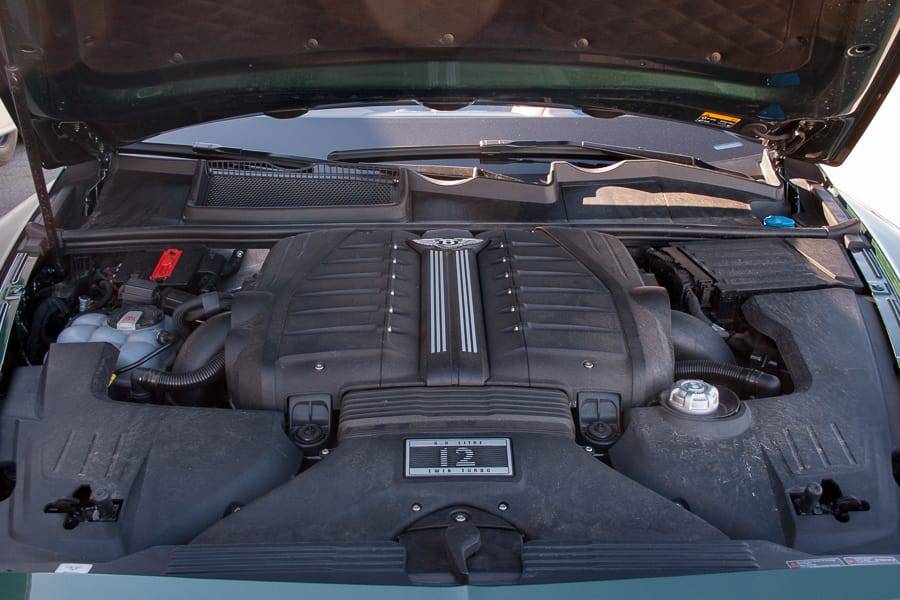 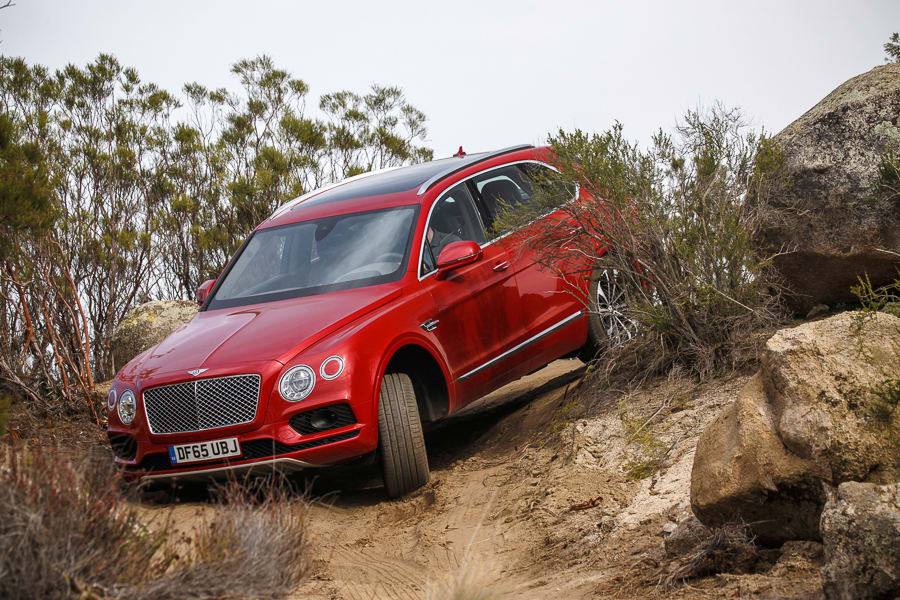 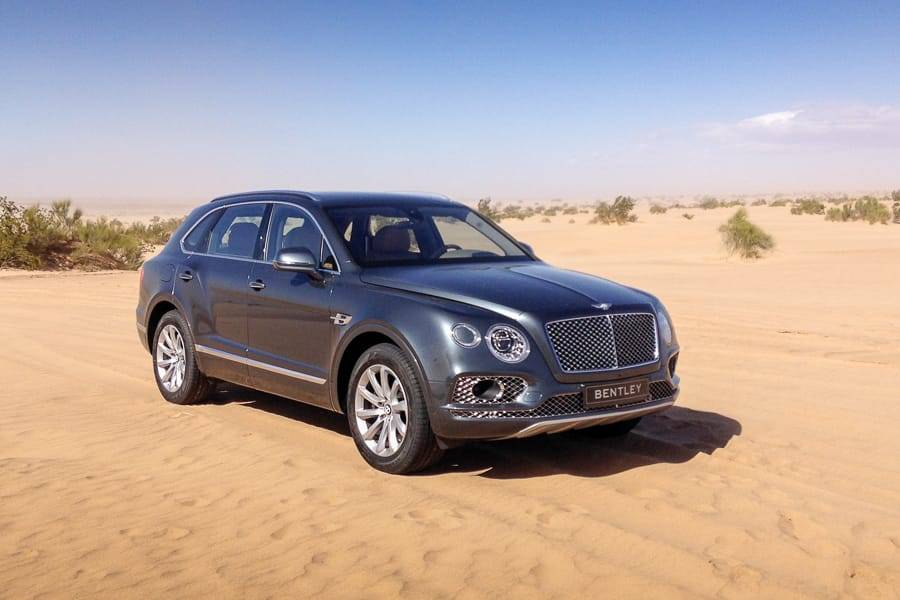 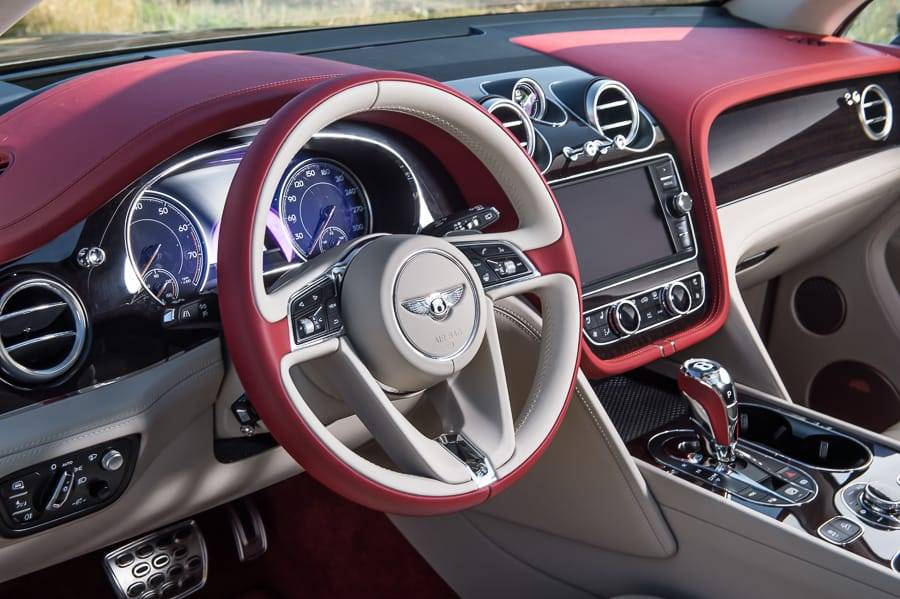 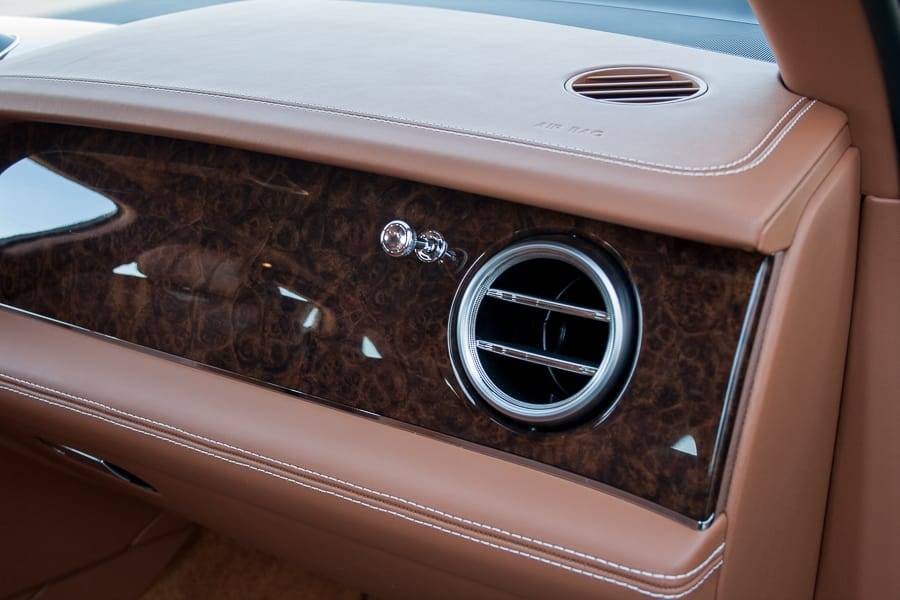 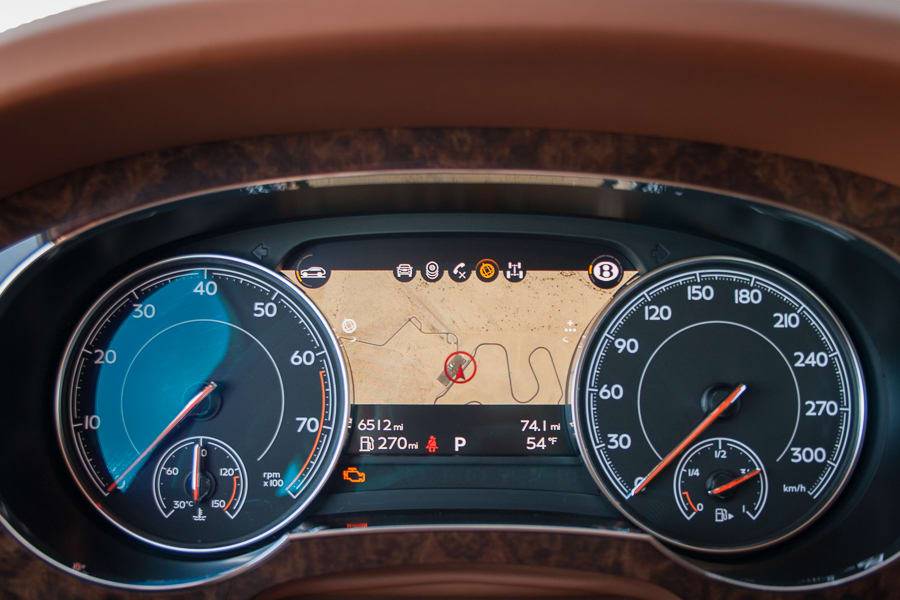 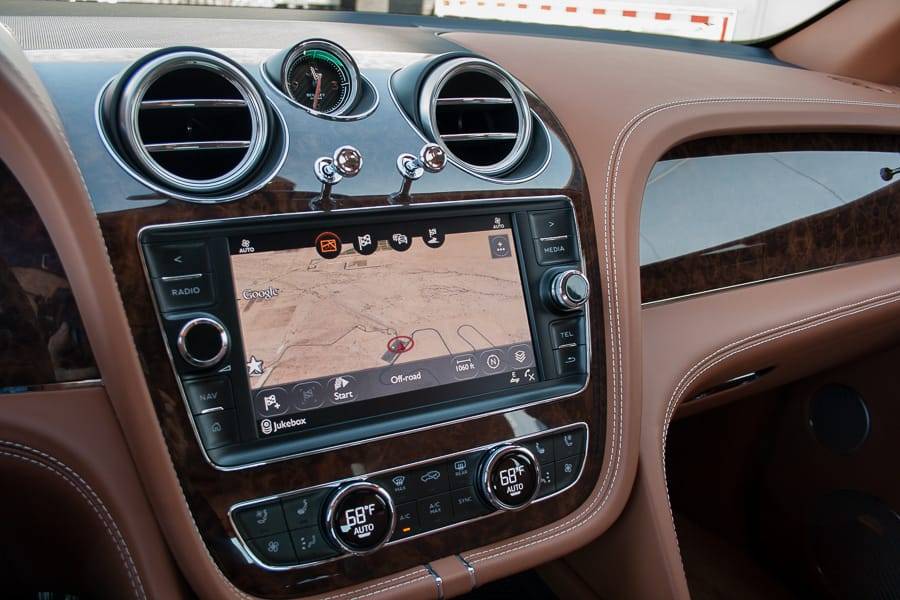 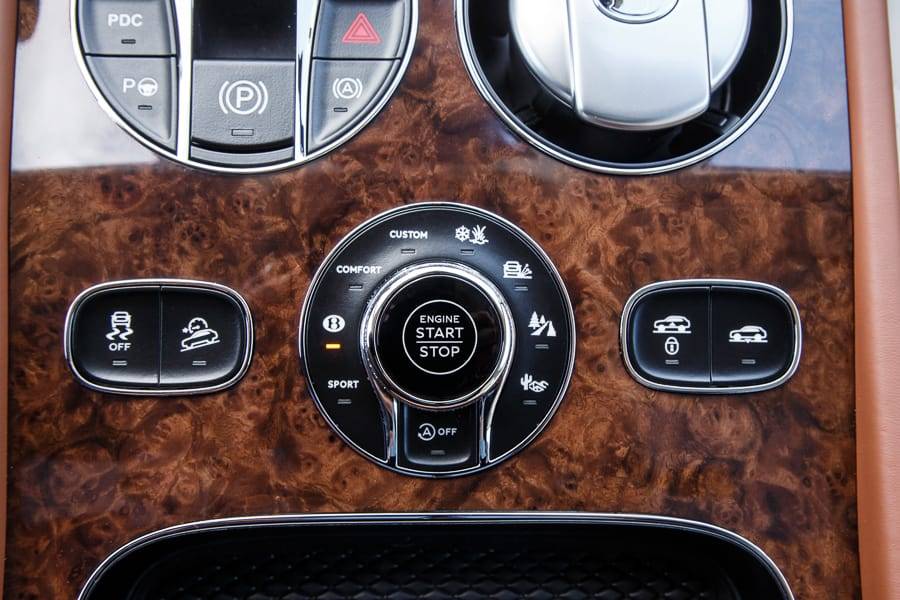 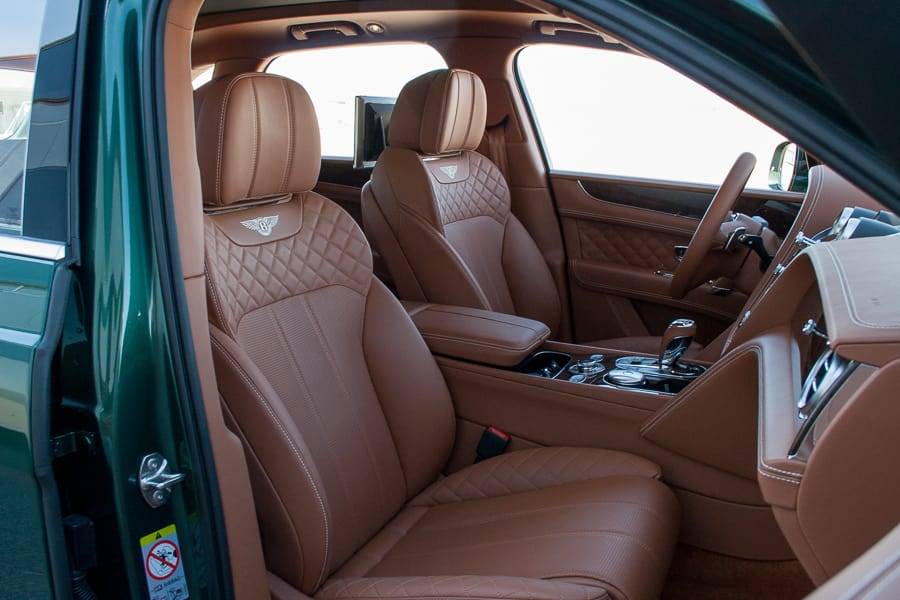 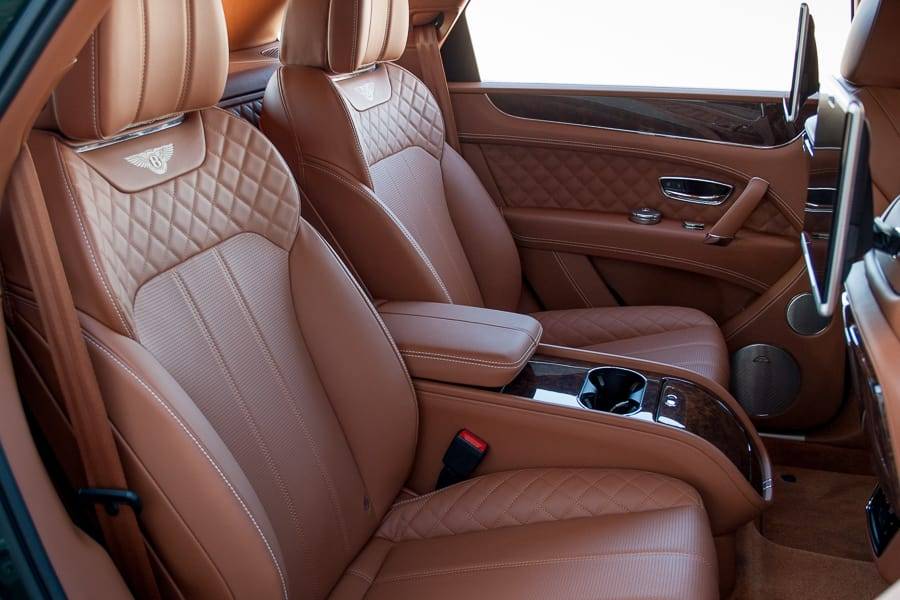 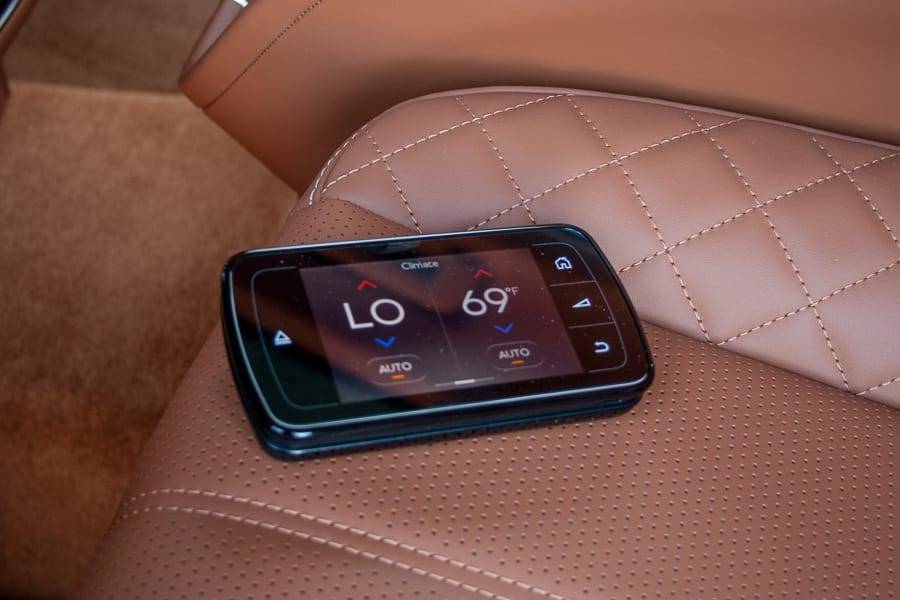 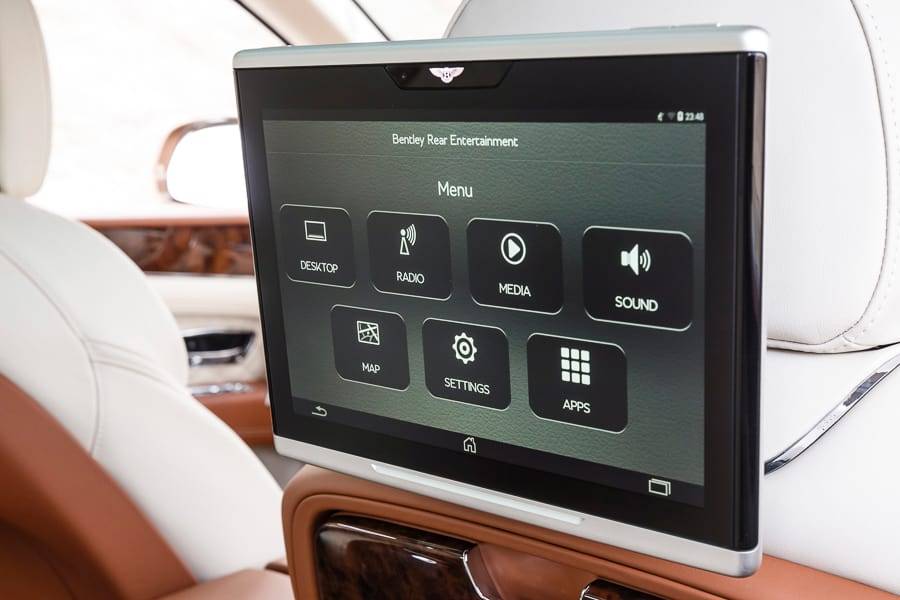 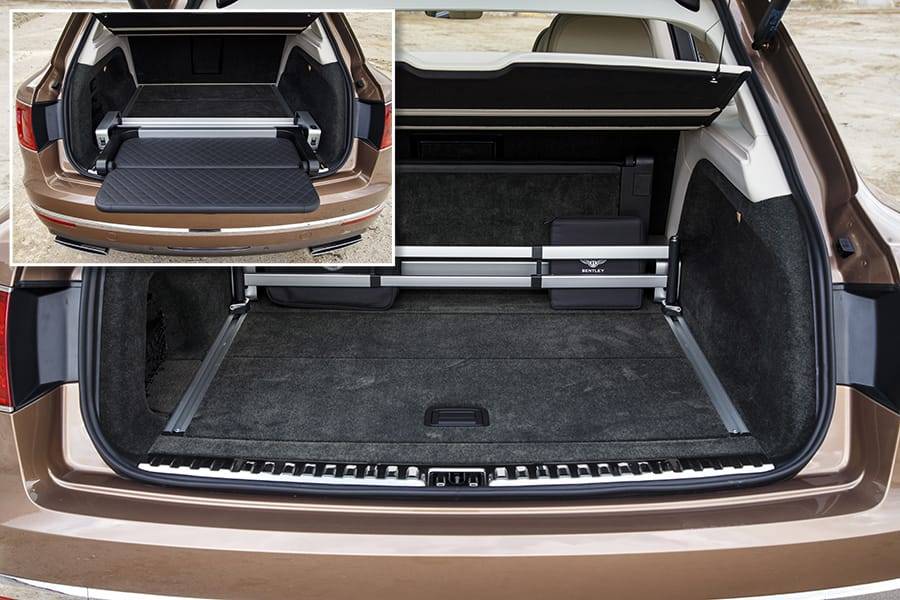 Consumers can’t get enough SUVs at the moment, but there haven’t been any ultraluxury ones until now. The Bentayga looks to capitalize on this drought because it’s not as if ultraluxury shoppers don’t appreciate SUVs. On the contrary; Bentley’s U.S. President and CEO Michael Winkler said average Bentley owners have five vehicles in their household, two of which are luxury SUVs.

The 2017 Bentayga shares its platform with the redesigned 2017 Audi Q7 (Bentley and Audi are Volkswagen subsidiaries). The two SUVs have different styling and powertrains, and the Bentayga’s unpainted unibody structure is shipped to Bentley’s factory in Crewe, England, for final assembly. The Bentayga is finished by hand, which takes around 130 hours.

I had the chance to drive a number of Bentaygas on surfaces many U.S. buyers likely never will encounter: rolling desert dunes, technical off-road terrain and a racetrack. In between, I drove it on California highways, city streets and winding mountain roads. Optional features on the Bentaygas I drove brought the as-tested prices to around $275,000.

With its large inner and small outer front lights, big mesh grille and smooth body sides, it’s clear Bentley was intent on creating a strong visual connection between its new SUV and its lineup of sports cars and sedans. While the designers have succeeded on that front, I question whether they’ve created a pretty SUV. That’s not the word that comes to mind when I look at it. The Bentayga’s outside front lights are too small, which gives the front end an odd look, and the rear styling isn’t particularly memorable. Even though cost isn’t the most important factor for the likely buyer, the Land Rover Range Rover looks just as stately for around a third of the Bentayga’s price.

The most remarkable thing about the Bentayga is how well it handles very different types of terrain. It’ll plow through loose sand and tiptoe down a 30-degree descent just as well as it cruises on the highway. It seems a little excessive to build so much off-road capability into a vehicle that will rarely, if ever, see that kind of terrain in the U.S., but the prospects are much greater in places such as China, Russia and the Middle East, where Bentley hopes to grow the brand with the Bentayga’s help. All the same, Bentley has done a masterful job integrating the technology that enables this multifaceted performance capability. Plus, it wouldn’t be an ultraluxury SUV if there weren’t a little excess involved, am I right?

The Bentayga is powered by a new twin-turbocharged 6.0-liter 12-cylinder engine that makes 600 horsepower and 664 pounds-feet of torque. The engine uses a special oil system to ensure there’s enough oil circulating even on 35-degree inclines. Engine power is routed through an eight-speed automatic transmission to a rear-biased all-wheel-drive system, and Bentley claims the 5,379-pound SUV can hit 60 mph in 4 seconds on its way to a top speed of 187 mph.

As high-performance engines go, this 12-cylinder is incredibly refined. At idle, you can’t hear it or feel any engine vibration from the driver’s seat. Power comes on in a wave that makes passing slower-moving traffic on two-lane roads effortless. Like the Range Rover Supercharged with its 510-hp V-8, the Bentayga has plenty of power to spare at highway speeds. Eventually, Bentley will offer V-8 and plug-in hybrid V-6 drivetrains.

As good as the 12-cylinder engine is, I was more impressed with the Bentayga’s optional active suspension. Dubbed Bentley Dynamic Ride, the system uses electric motors that act on the stabilizer bars to limit body roll in corners. It’s an effective system; it kept the Bentayga relatively flat on winding mountain roads and made this big SUV feel more at home on a 17-turn, 2.7-mile racetrack than it had any right to be.

A four-corner air suspension works with the active stabilizer bars. An air suspension might conjure up thoughts of pillow-soft ride quality, but that’s not what the Bentayga provides; the ride is relatively firm, and small imperfections like cracks or bumps are transmitted to the cabin, making the ride feel busy at times. I think some shoppers are going to expect more road isolation than the setup provides. Suspension responses don’t appreciably change whether you’re in Comfort, Bentley (normal) or Sport mode, which is selected by a rotary knob on the center console. Sport, however, improves gas-pedal response and keeps more engine power at the ready by preventing the automatic transmission from upshifting aggressively. All U.S. models include the All-Terrain Specification, which adds four off-road driving modes — Snow & Grass, Dirt & Gravel, Mud & Trail and Sand Dunes — to the rotary knob.

Apart from a few Audi tech details, such as the configurable instrument-panel screen, the cabin is pure Bentley with its focus on exquisite detailing and rich materials. Nearly every surface on the models I drove was finished in leather, wood or chrome. There are 15 leather colors and seven veneers available for the Bentayga, and other elements, such as the seat belts and carpet, are matched to the leather color.

It’s a comfortable interior with seating for four or five depending on the backseat configuration (the four-seat arrangement is an $11,015 option). The front and rear seats have firm but comfortable cushions and the backseat is comfortable for adult passengers thanks to a seat cushion that’s high enough off the floor combined with good thigh support and legroom. The rear backrest reclines, too. Eventually, Bentley will offer a two-seat third row intended for children.

Rather than following BMW, Audi, Mercedes-Benz and others with a controller-based multimedia system, Bentley has given the Bentayga a familiar touch-screen. The 8-inch dashboard screen responds quickly to menu selections and supports smartphone-style inputs, such as pinching the screen to zoom the navigation map.

The rear-seat entertainment system is a pricey $7,155. Rather than using built-in screens, the Bentayga has two 10.2-inch Android tablets that attach to the backs of the front seats and also can be used outside the SUV. The interface is Bentley-specific, but the tablets can run regular Android apps. The tablets can stream audio through the SUV’s speakers and send destinations to the Bentayga’s navigation system. They also can use the SUV’s 4G LTE Wi-Fi internet connection.

Most of the controls are sensibly arranged, but the electronic gear selector on the center console isn’t the most intuitive. On most shifters Park is the position closest to the dashboard, but in the Bentayga it’s a button on the shifter itself. That unnecessarily complicates an otherwise-familiar interface.

For $3,200, the Event Specification includes a sliding and folding rear-facing seat in the cargo area. It’s built for two adults to sit at the edge of the cargo area with the liftgate open and is finished in diamond-quilted leather. The seat also serves as a cargo divider. If you only want a cargo divider, the $200 Luggage Management Specification includes a telescoping dividing bar and straps that work with standard floor rails.

The Bentayga hasn’t been crash-tested by the Insurance Institute for Highway Safety or the National Highway Traffic Safety Administration. Like other expensive, low-volume models, it probably won’t ever be tested.

Without any true direct competitors at the moment, we’re left comparing the Bentayga to pricey luxury SUVs such as the Range Rover and Cayenne, the latter of which aligns well from a performance perspective.

That may be beside the point for the typical Bentley customer, who has a net worth of anywhere from $5 million to more than $30 million, according to the automaker. What the Bentayga does offer is a level of exclusivity that Land Rover and Porsche can’t match and that won’t be rivaled until other ultraluxury brands enter the SUV segment in a few years.