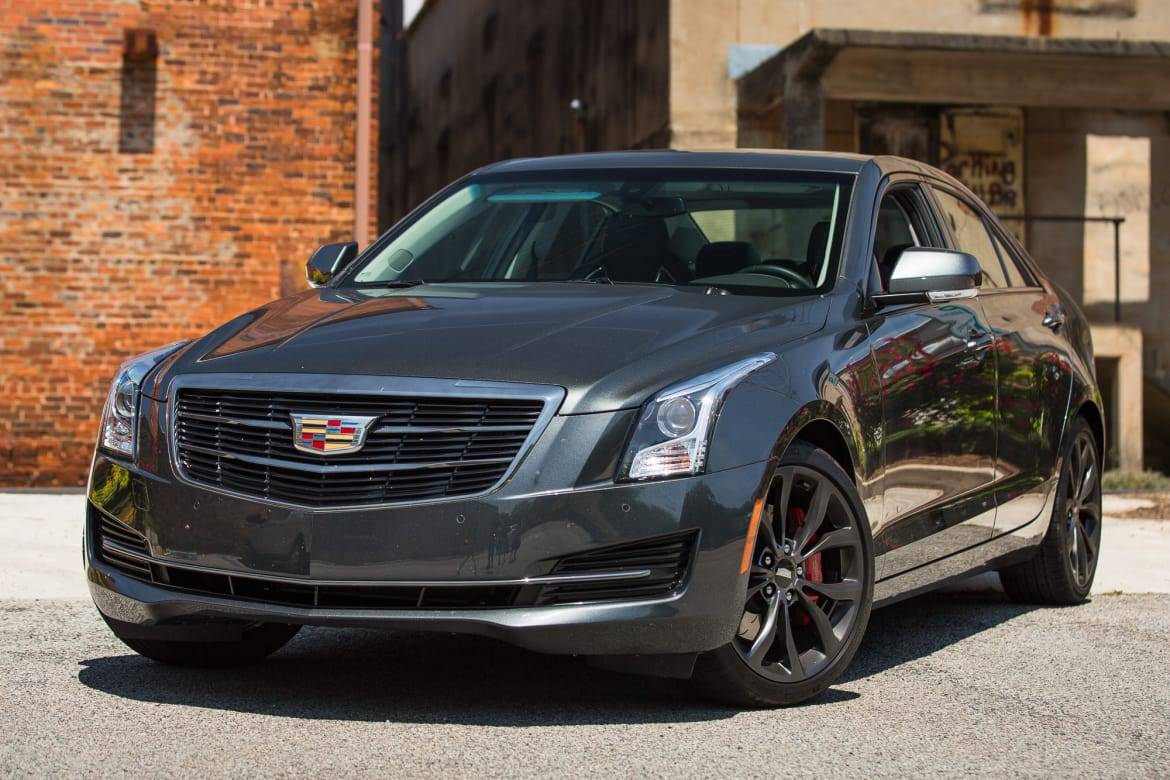 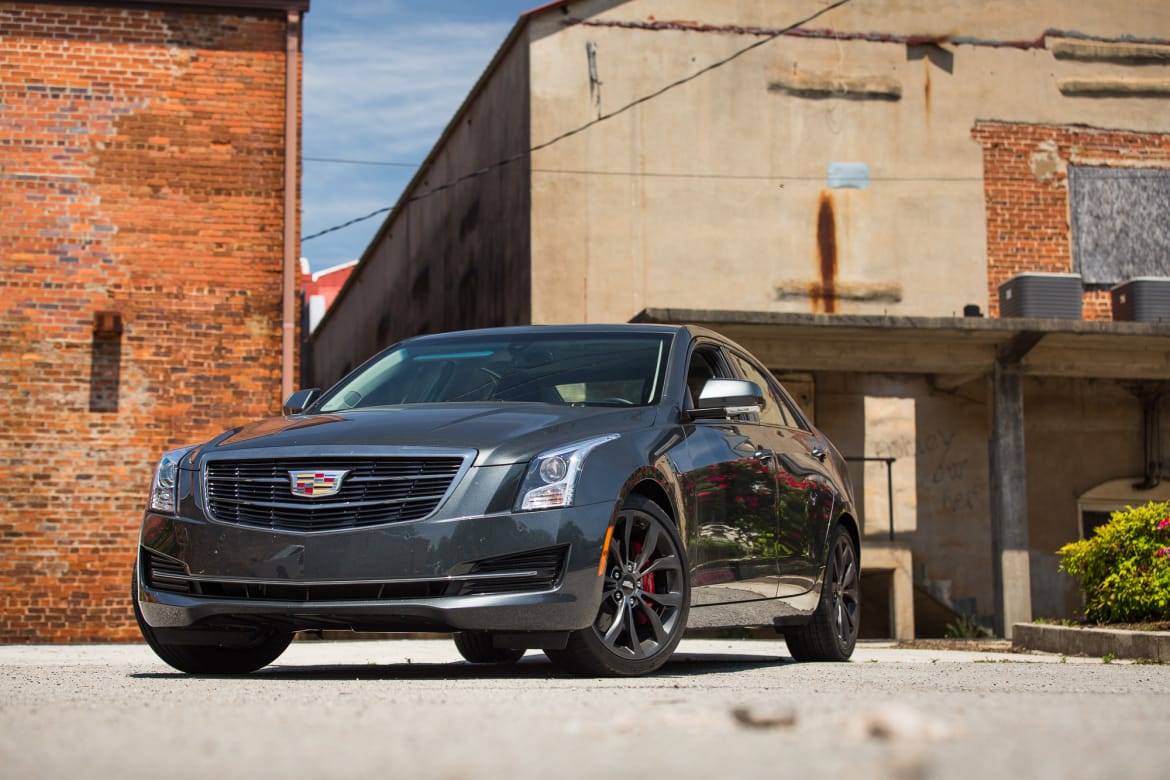 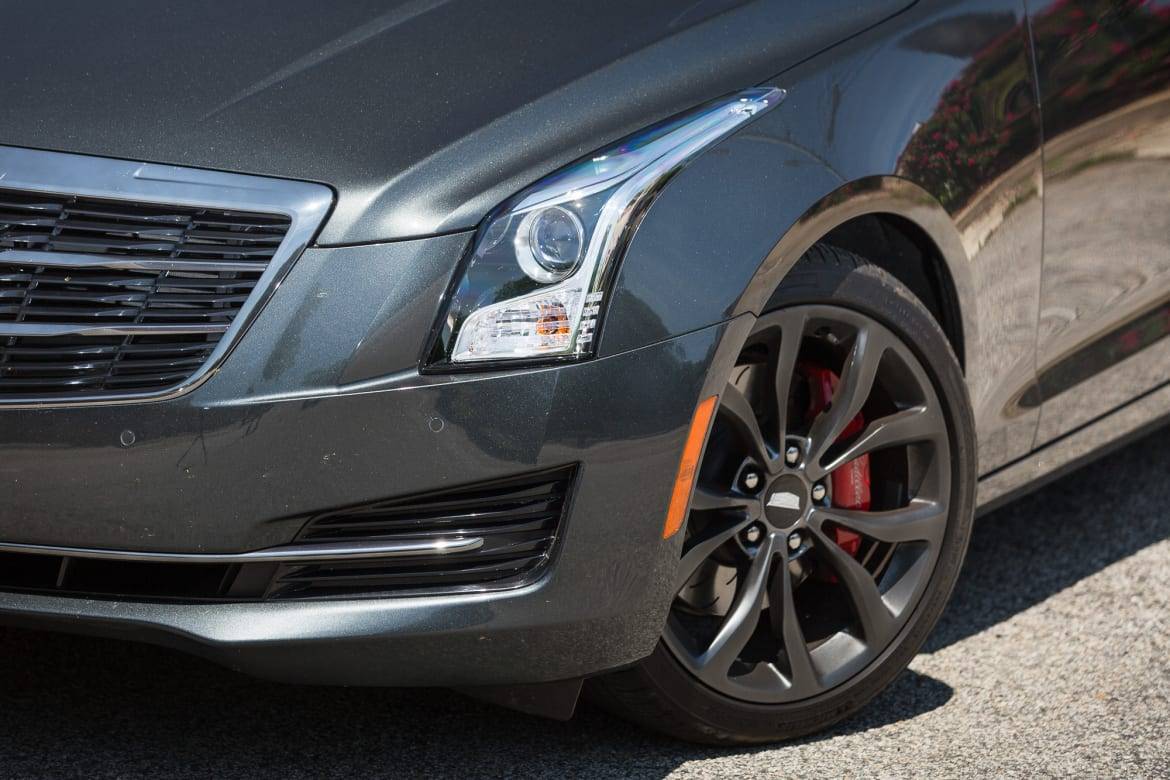 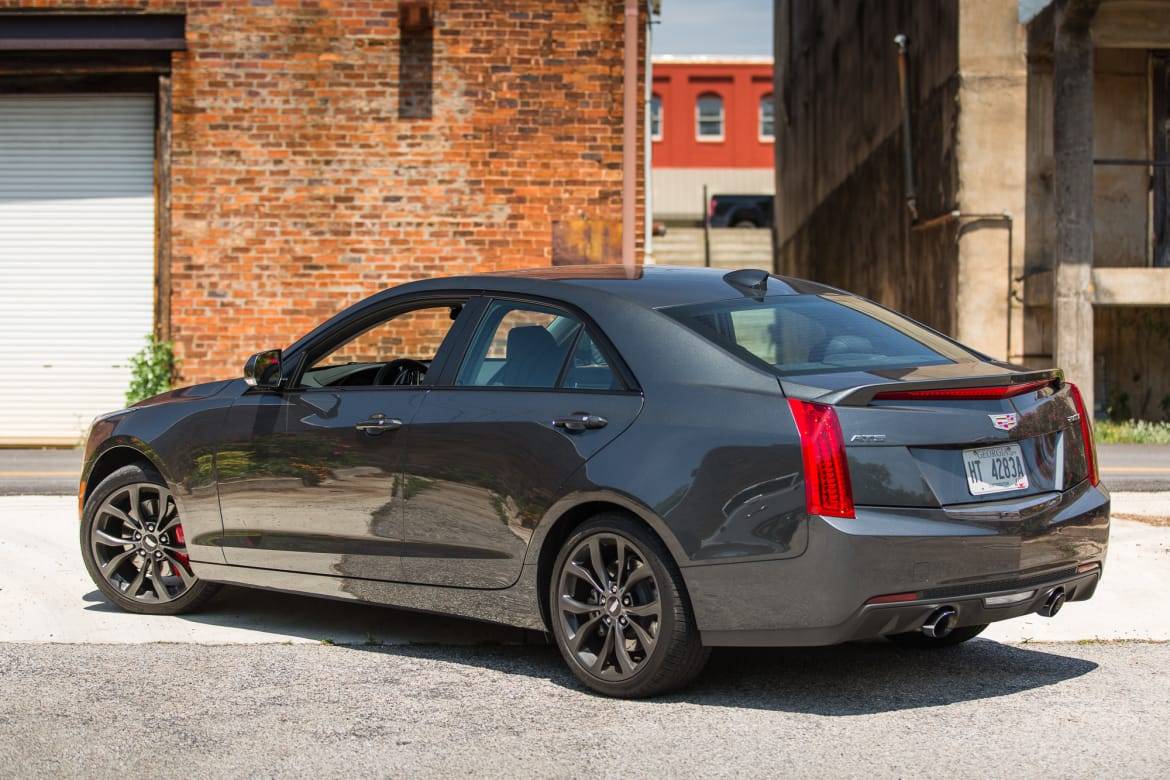 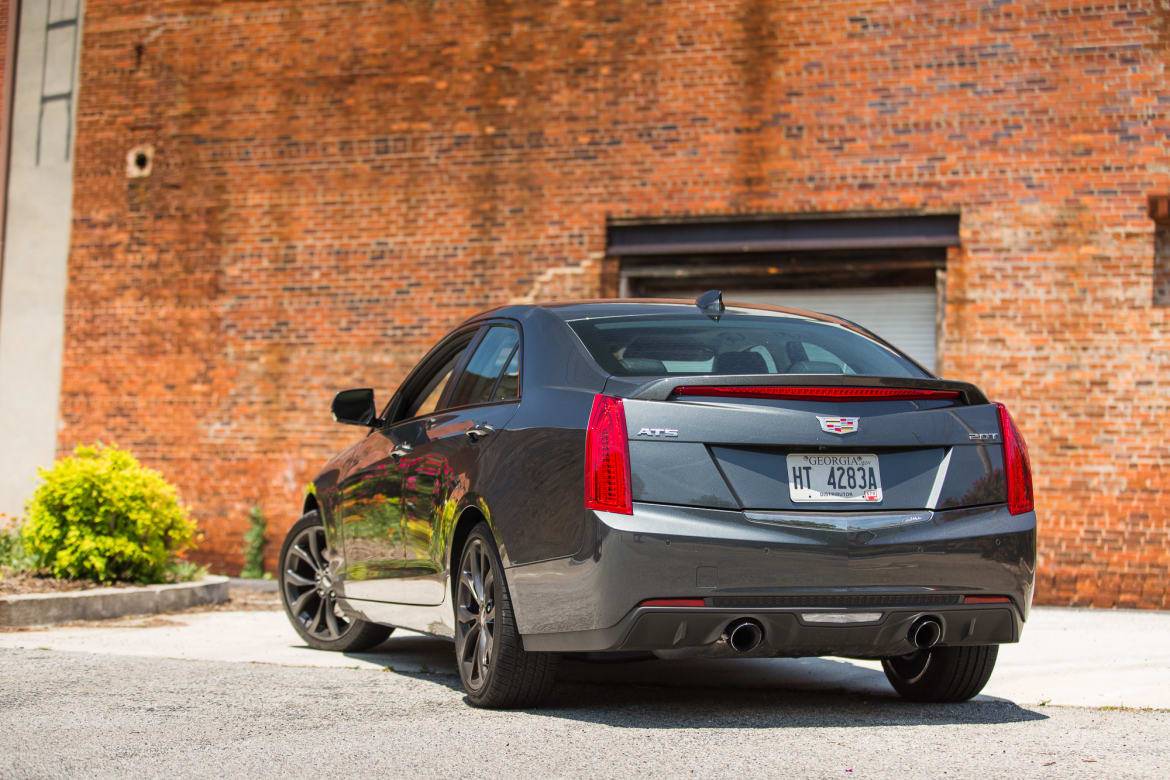 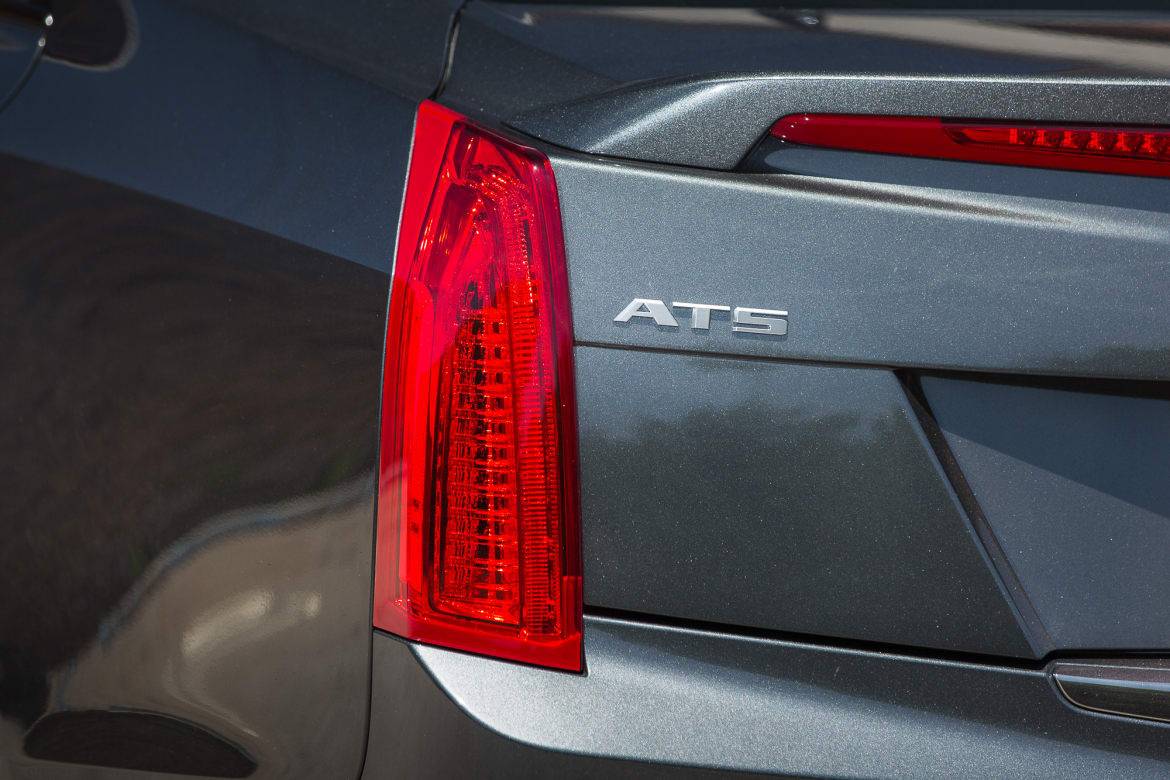 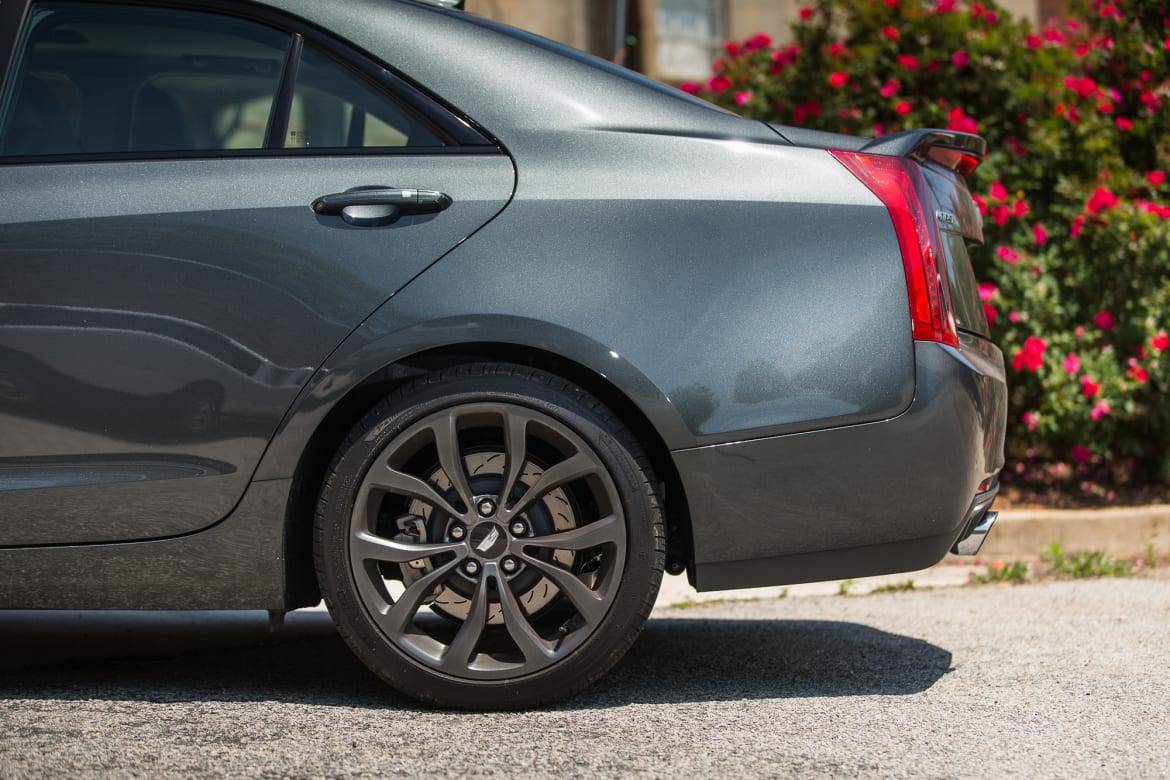 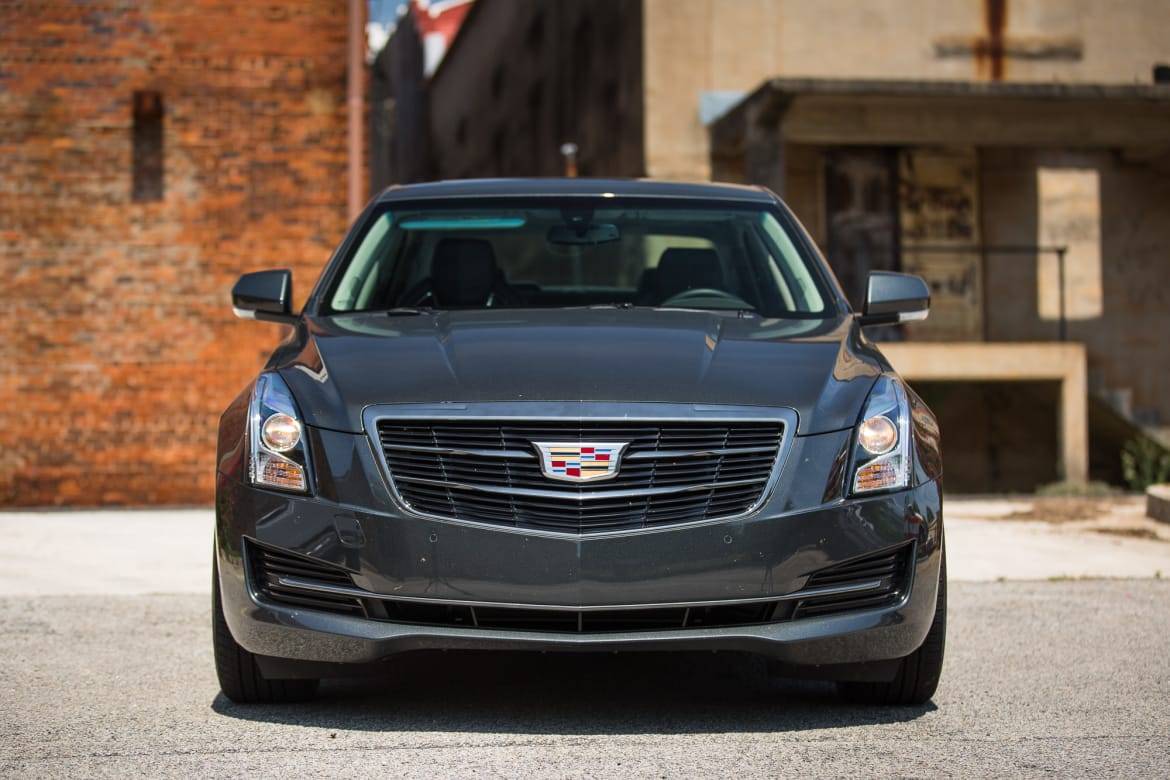 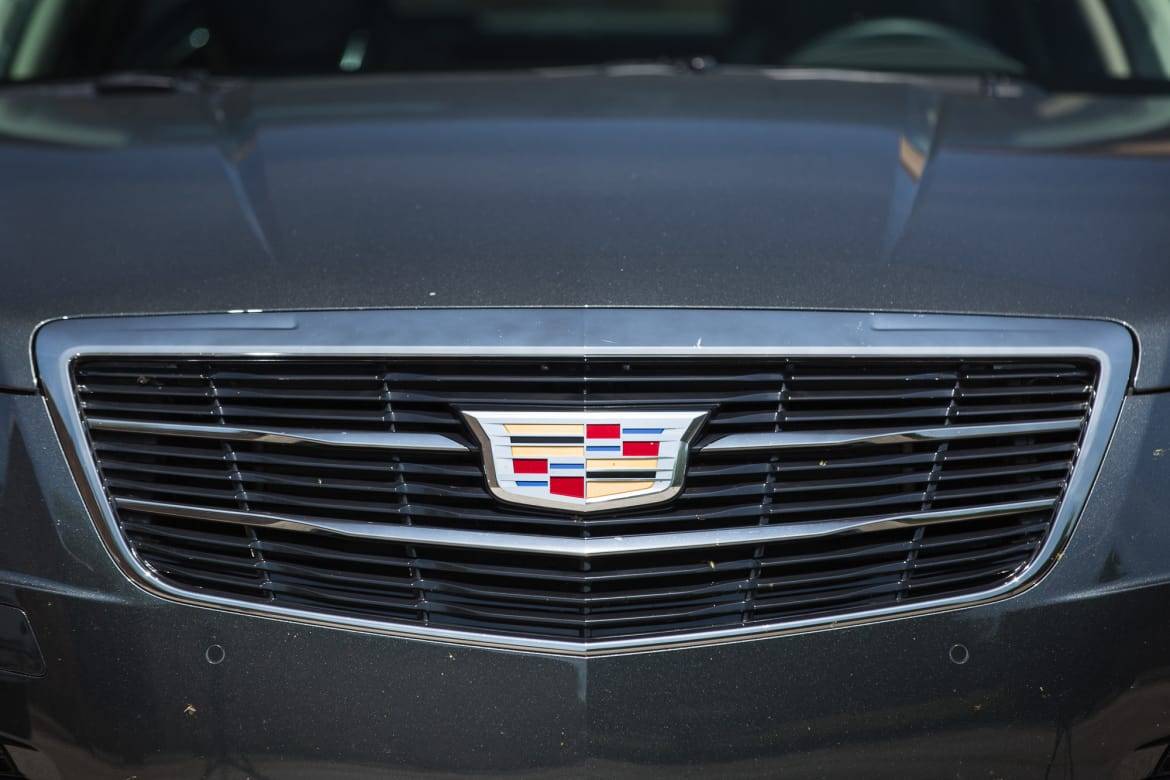 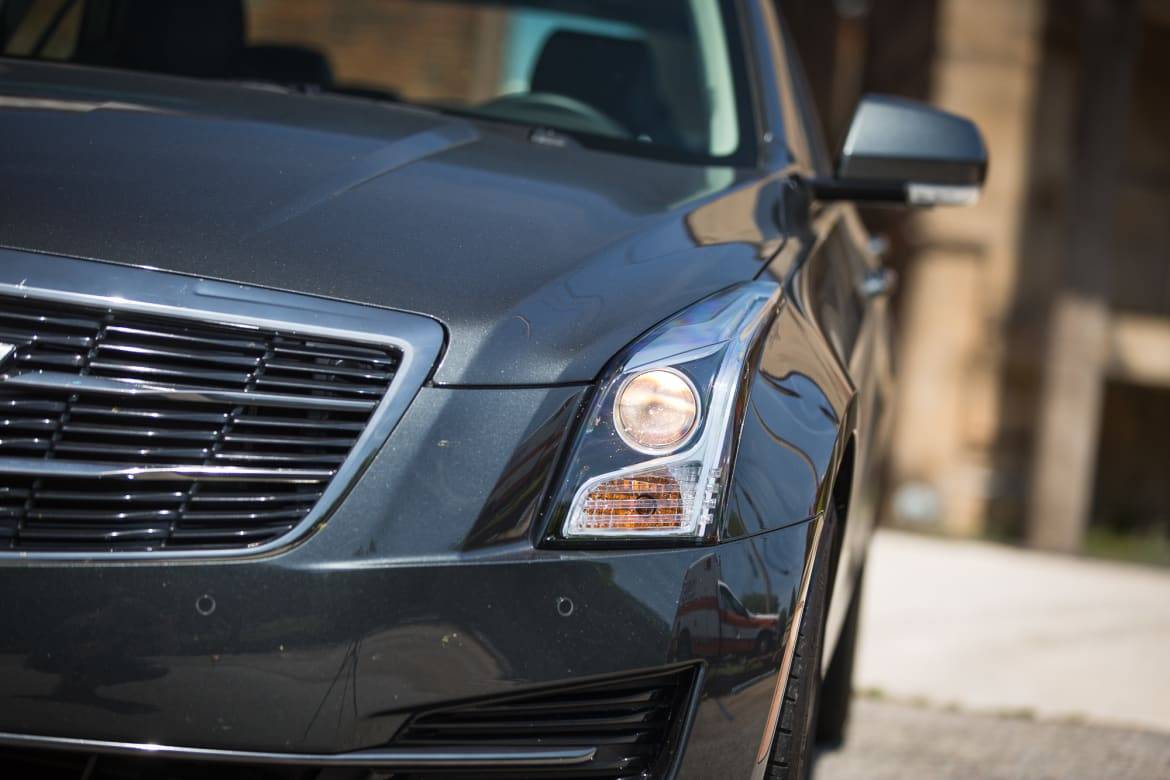 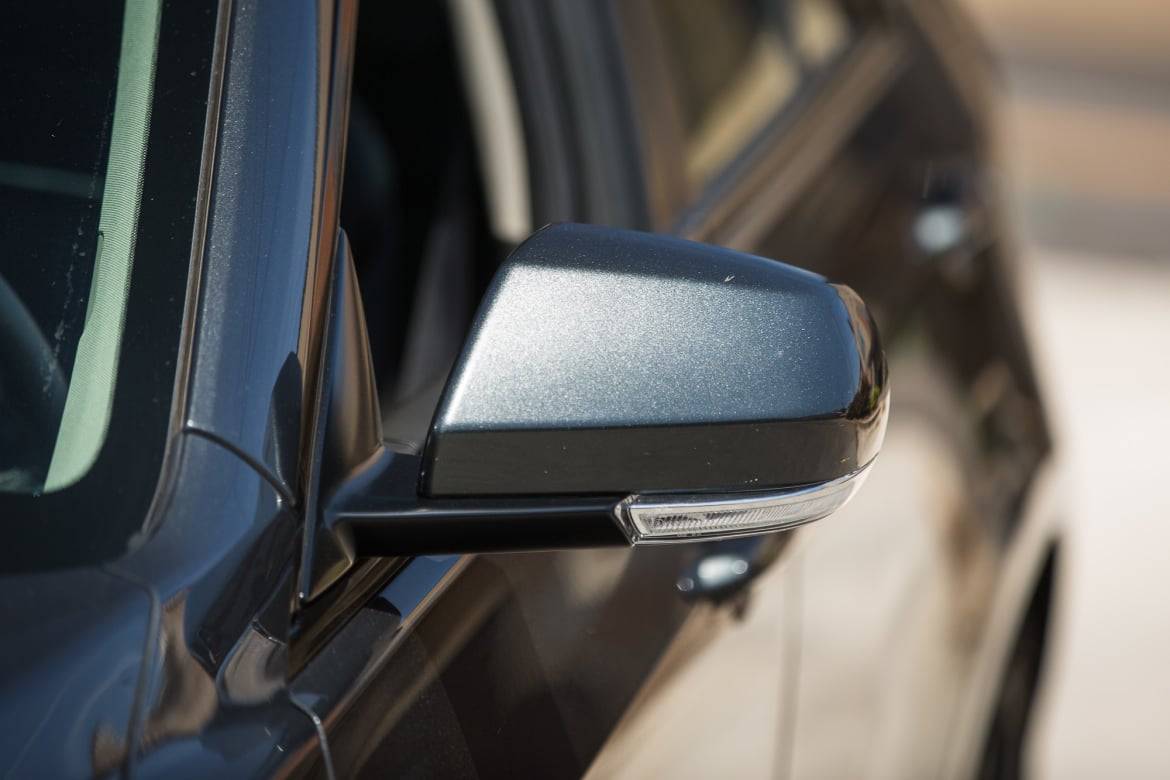 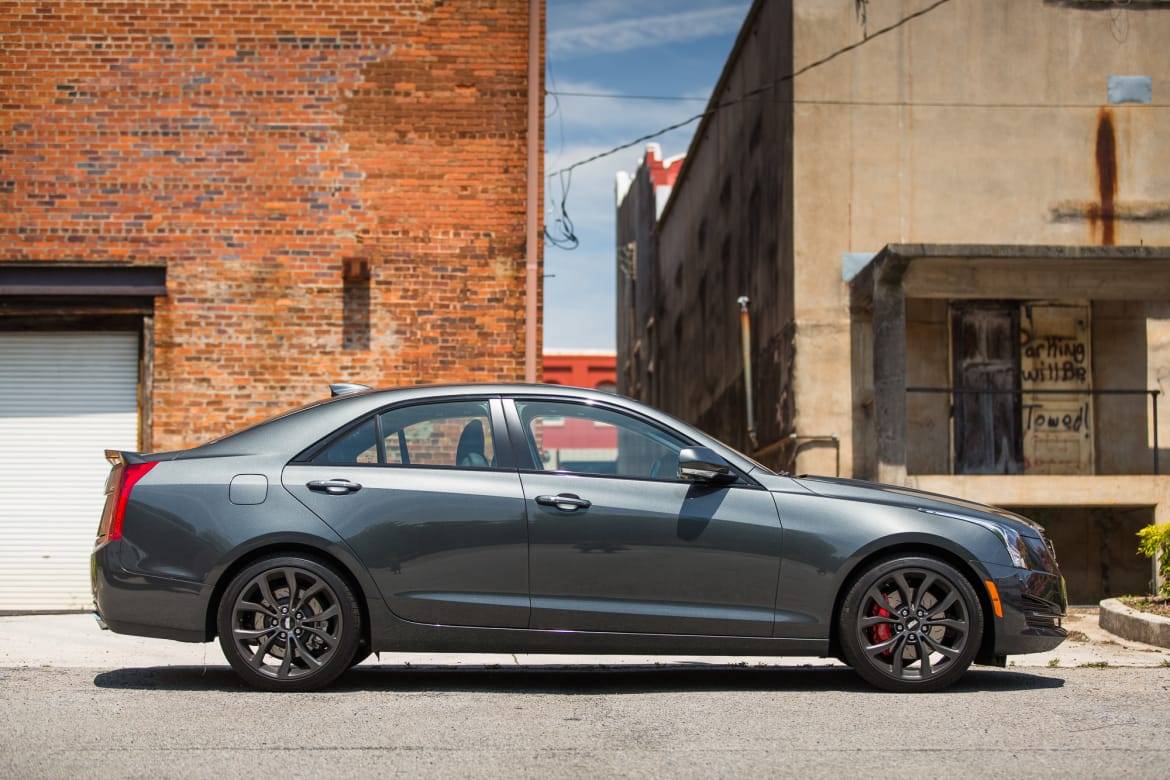 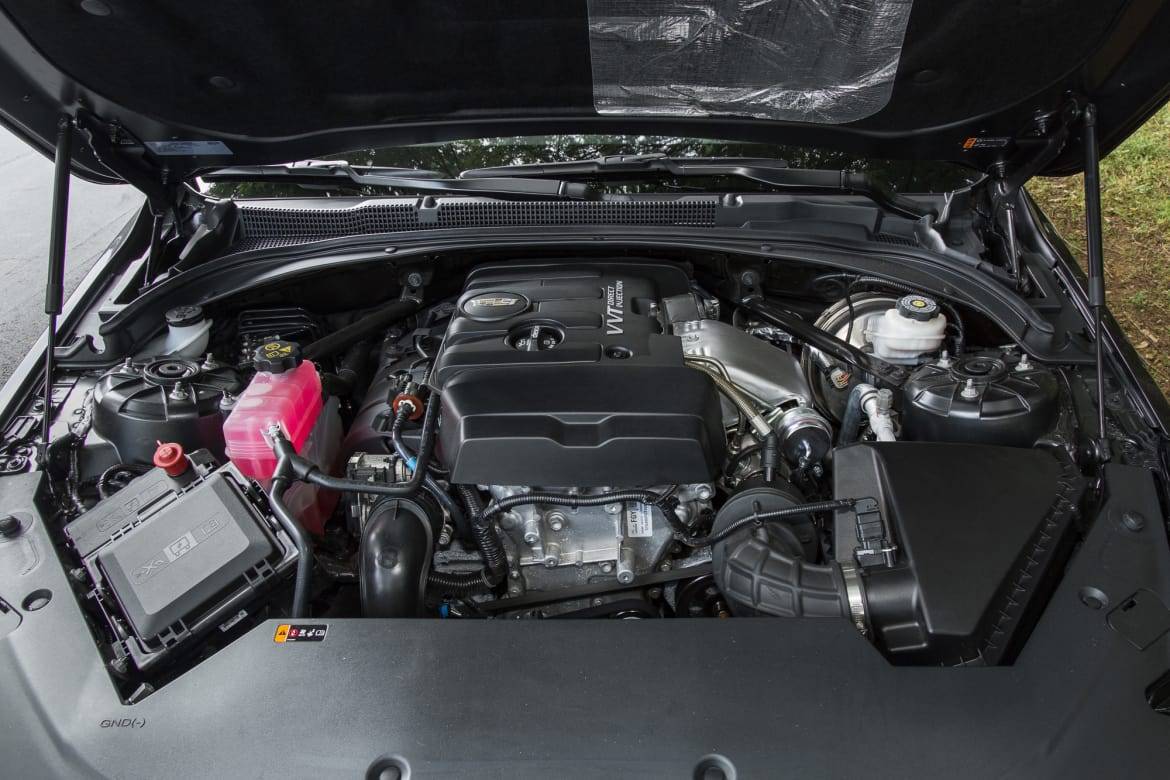 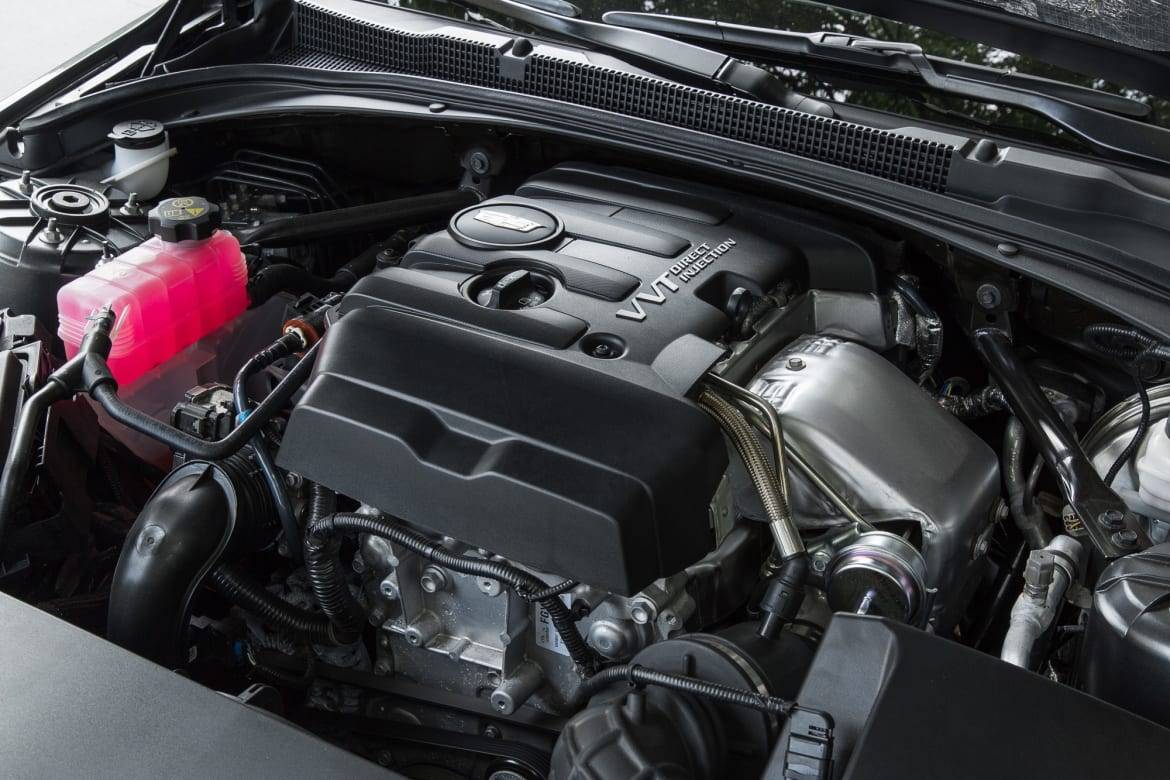 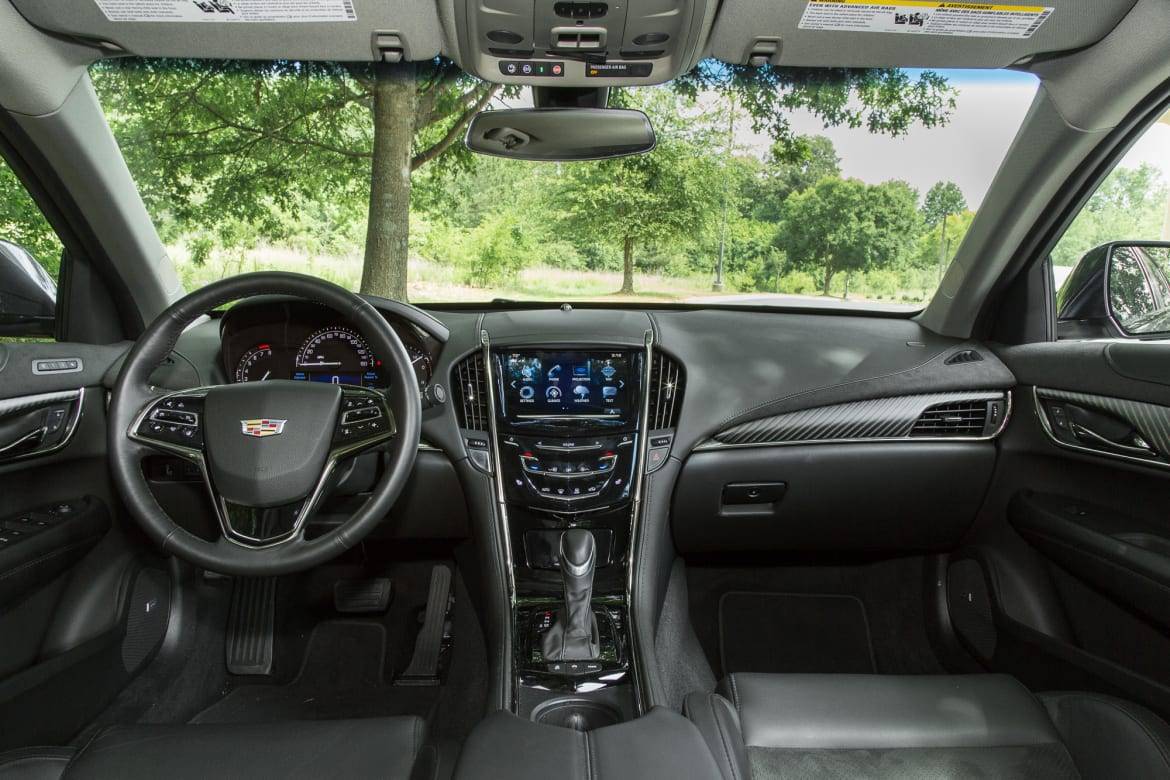 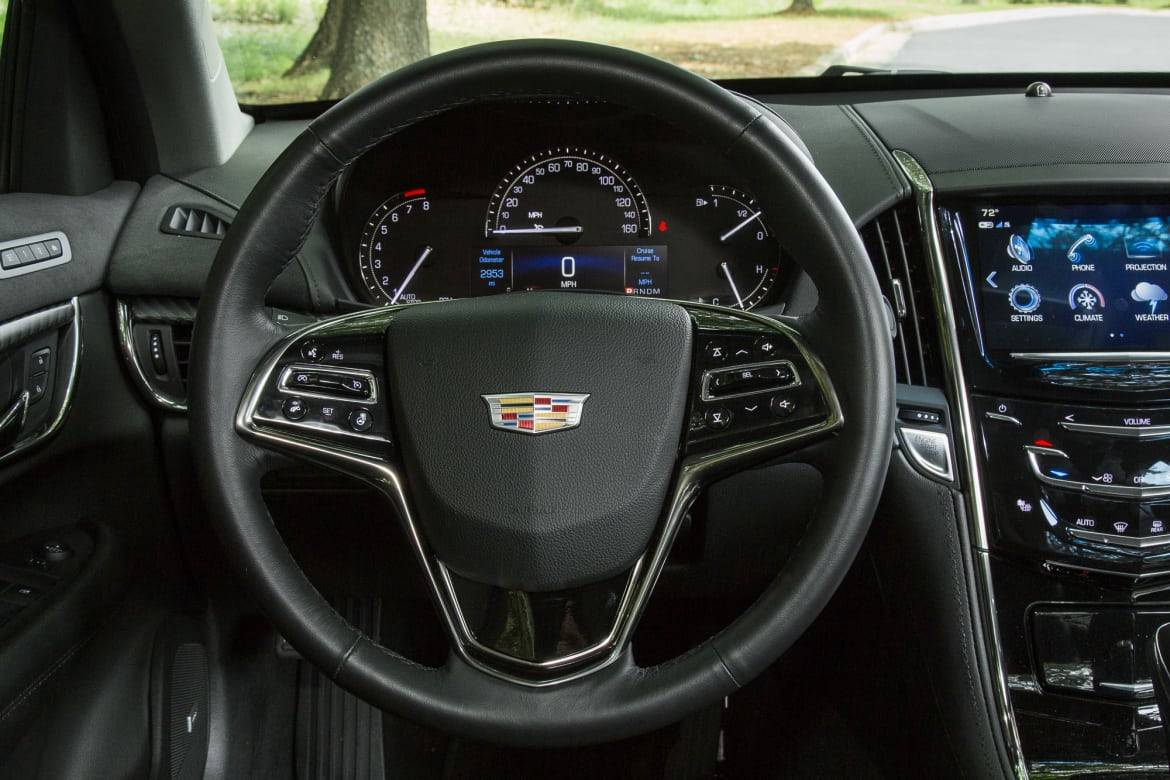 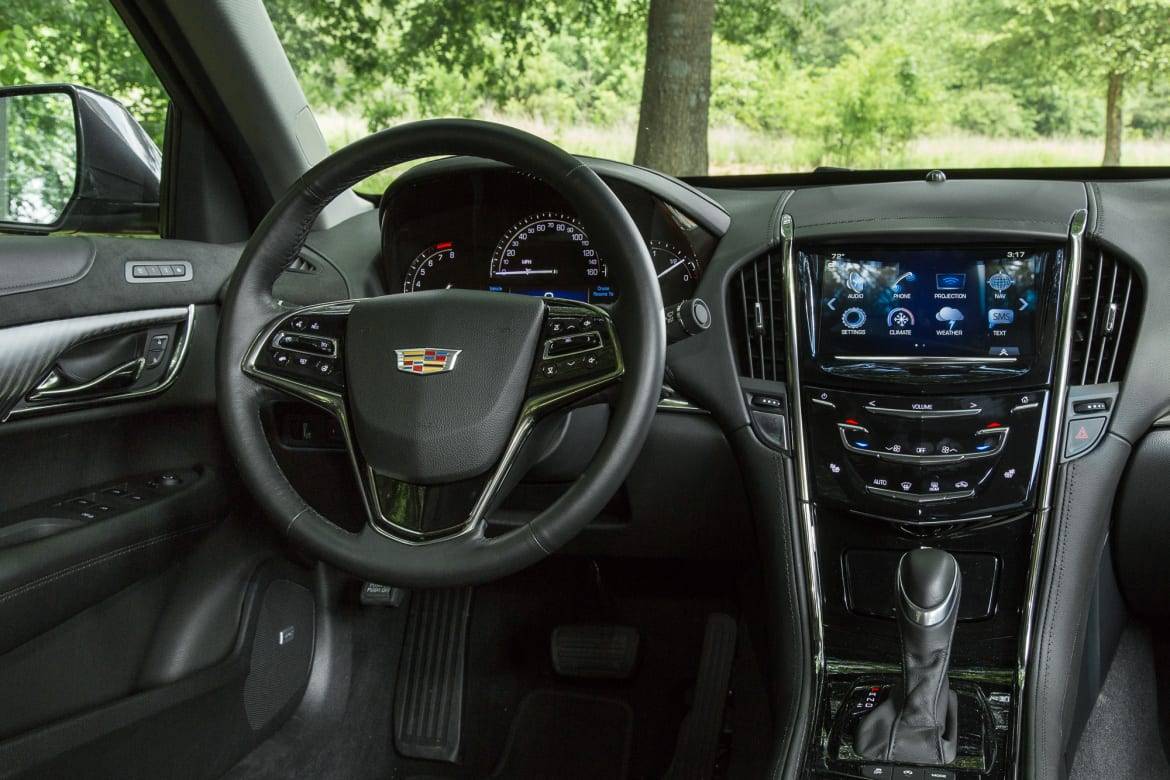 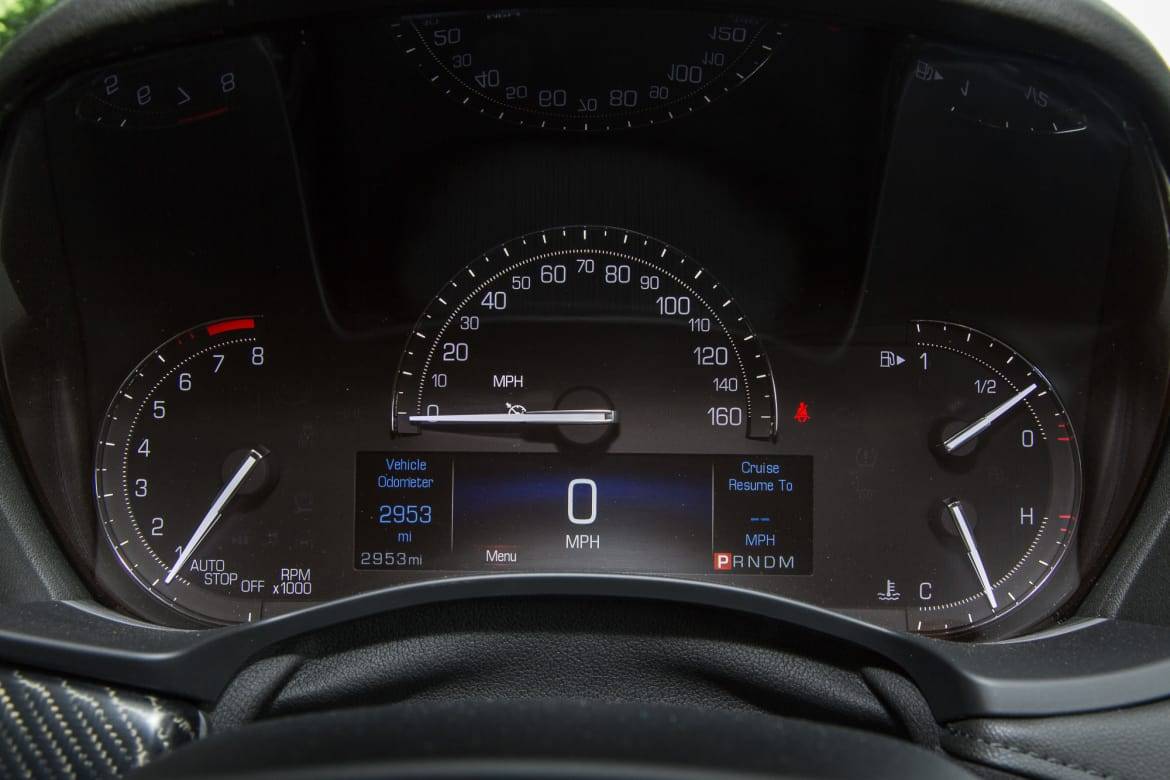 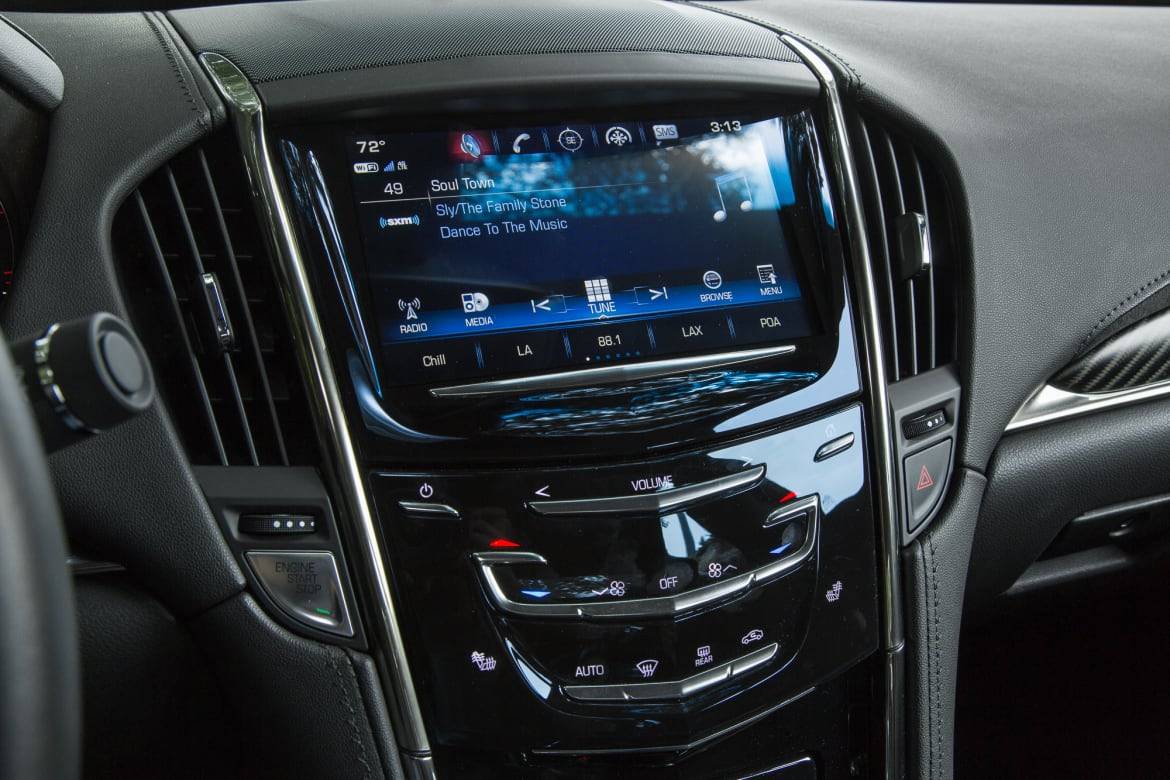 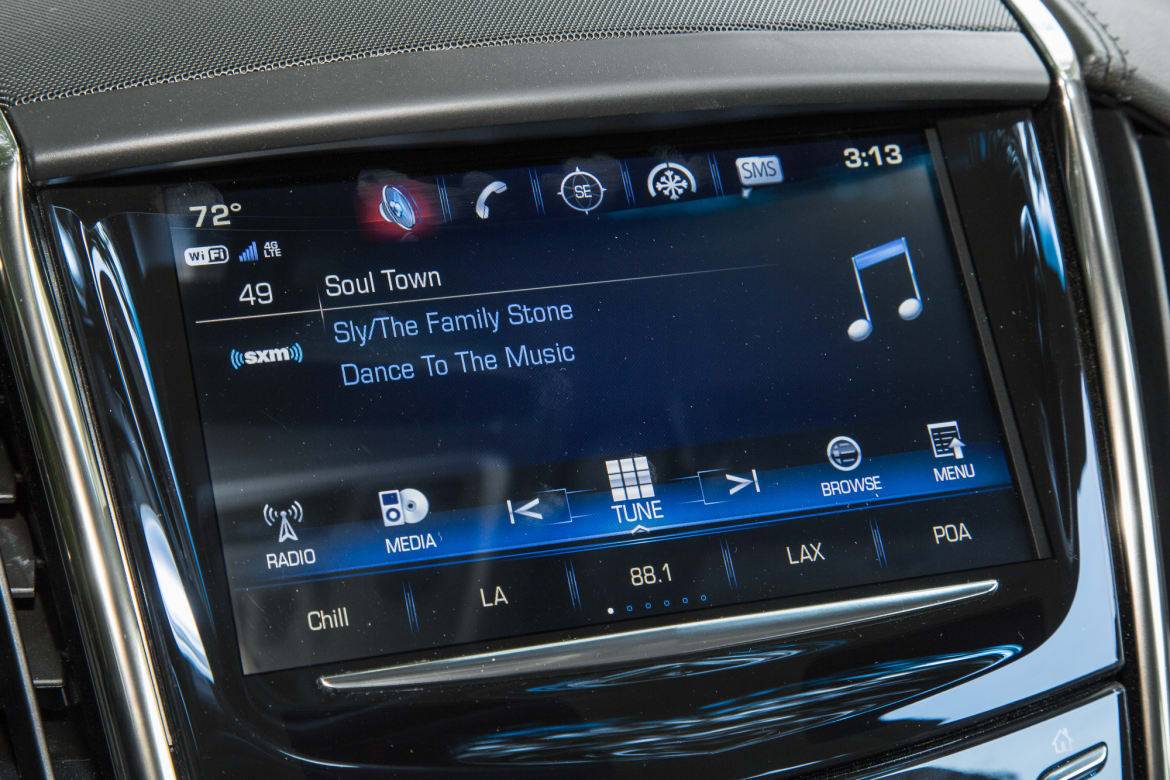 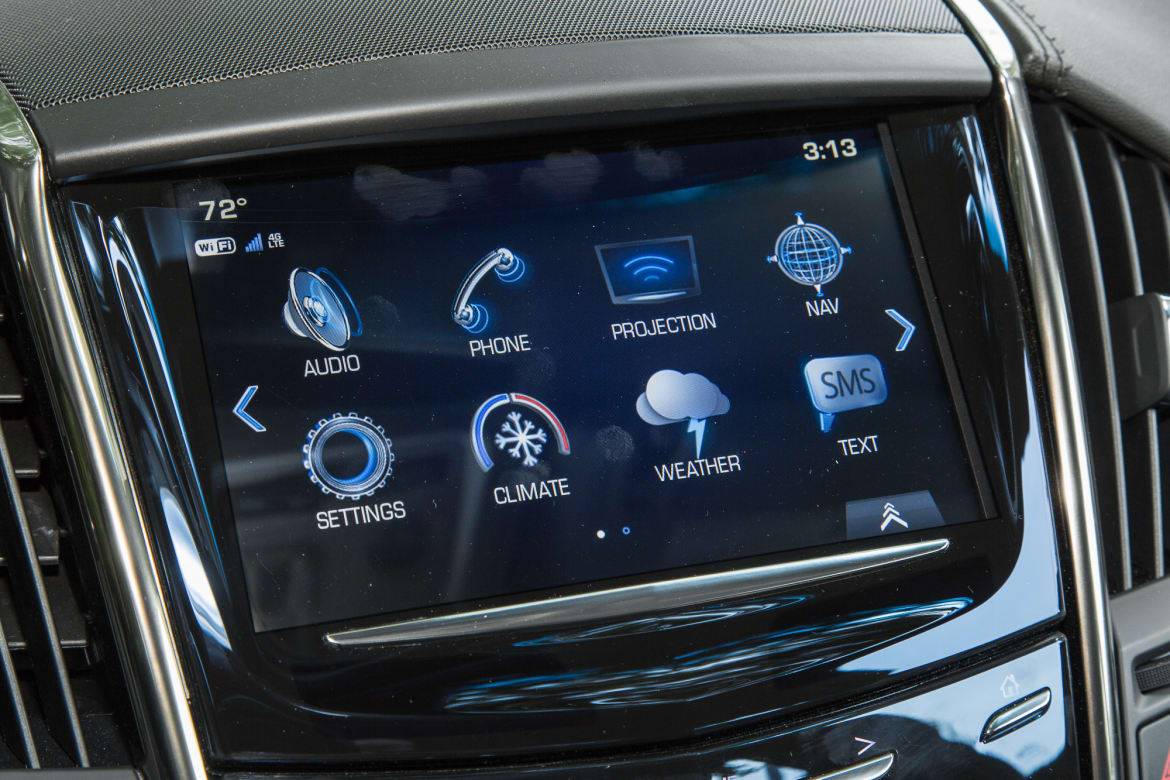 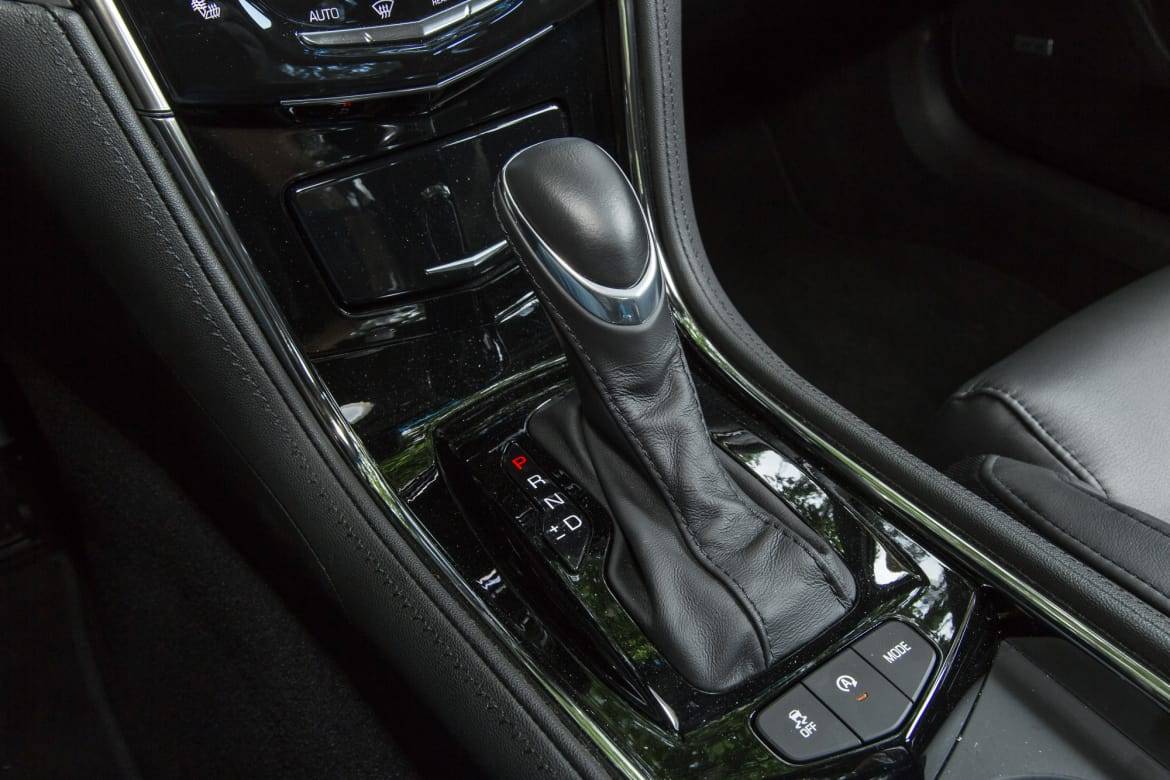 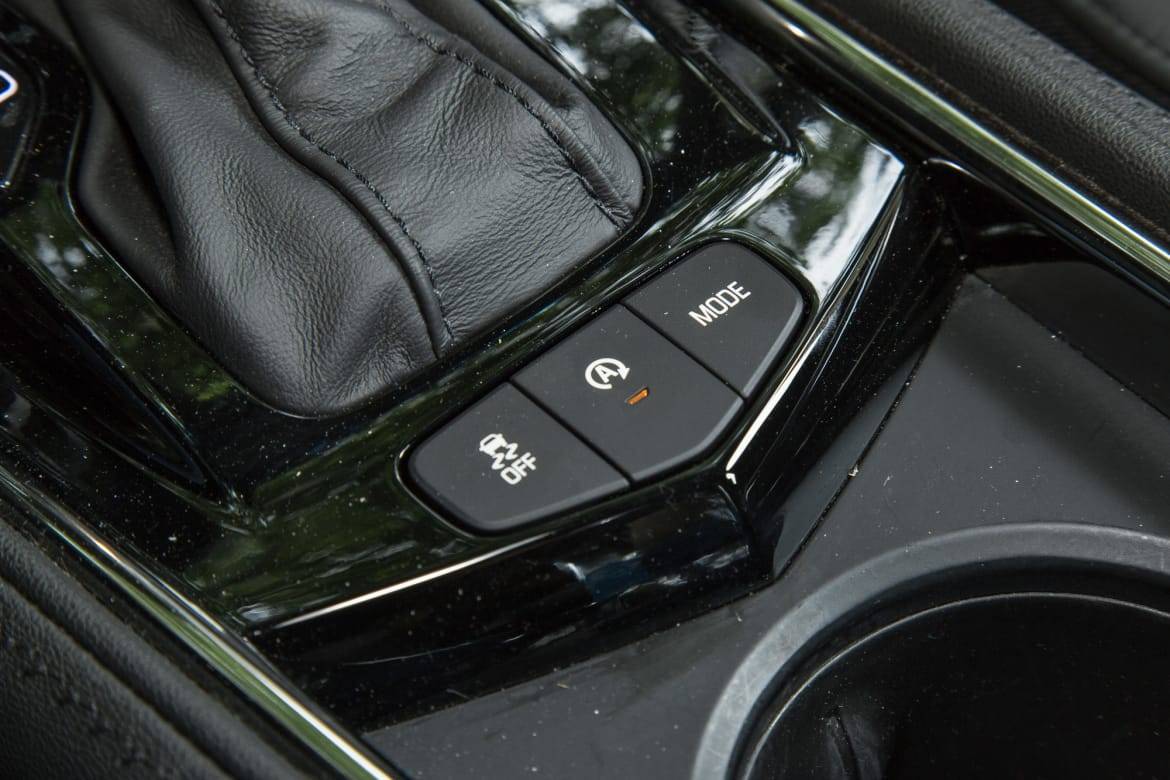 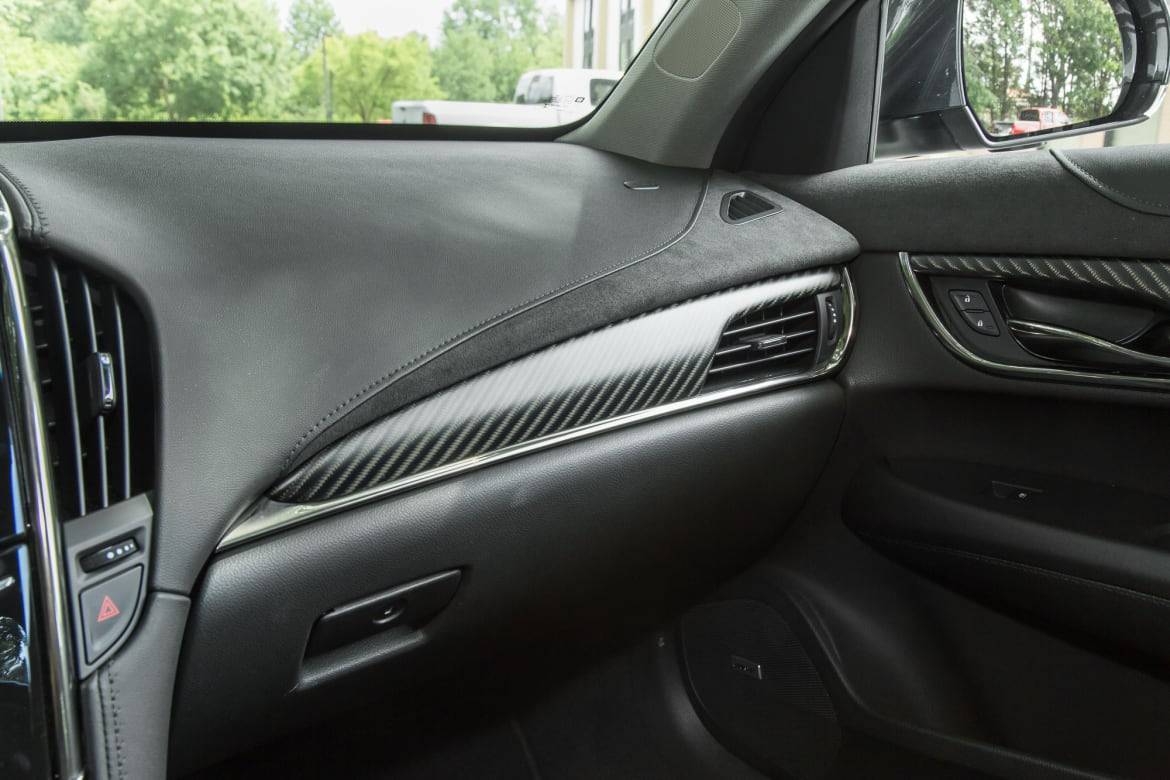 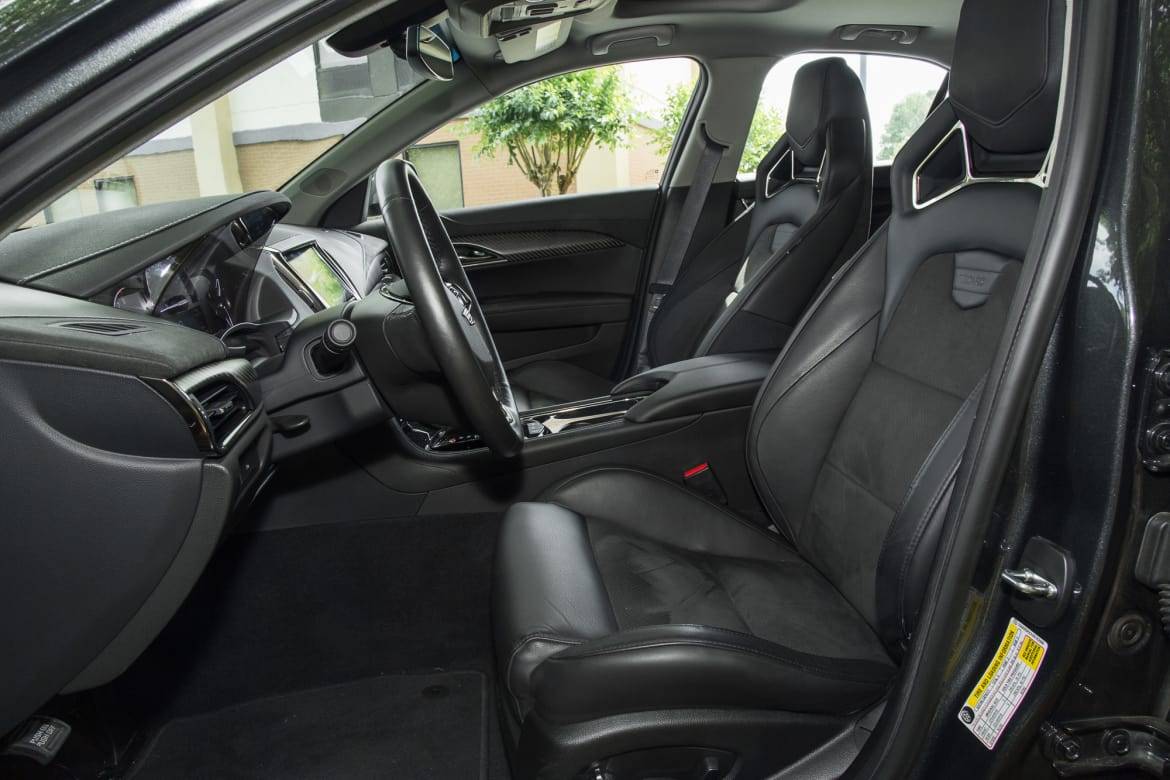 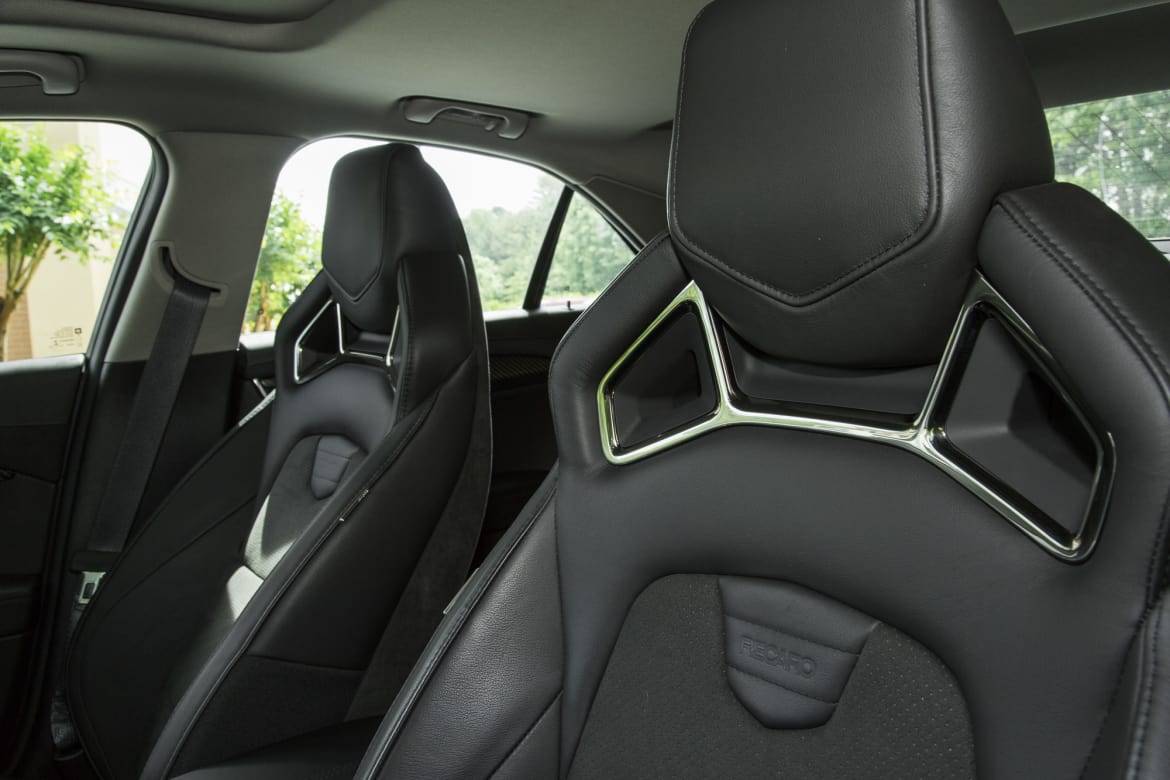 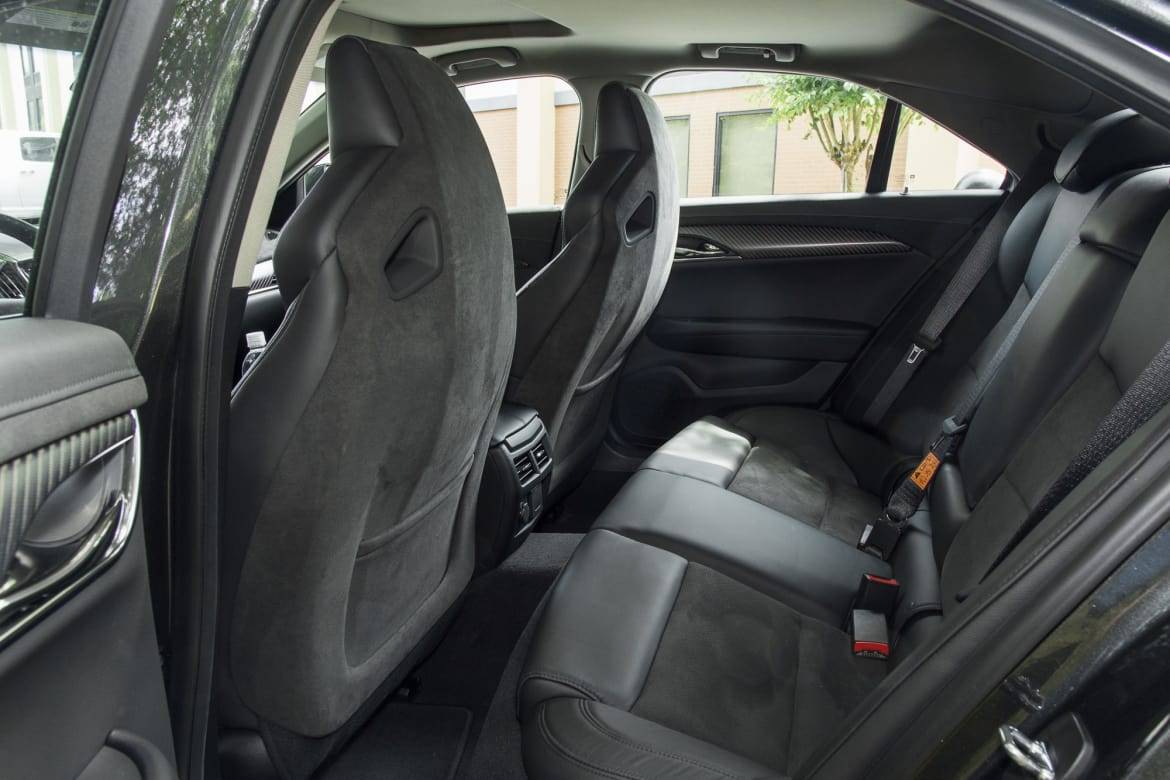 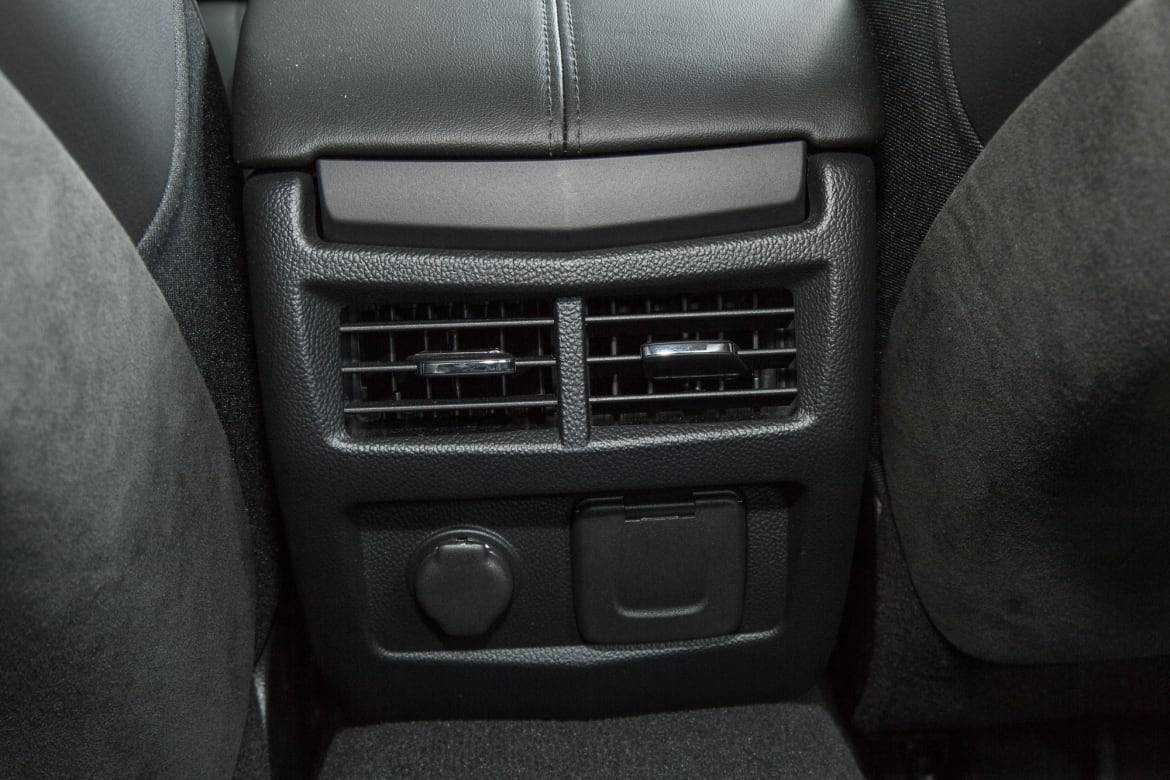 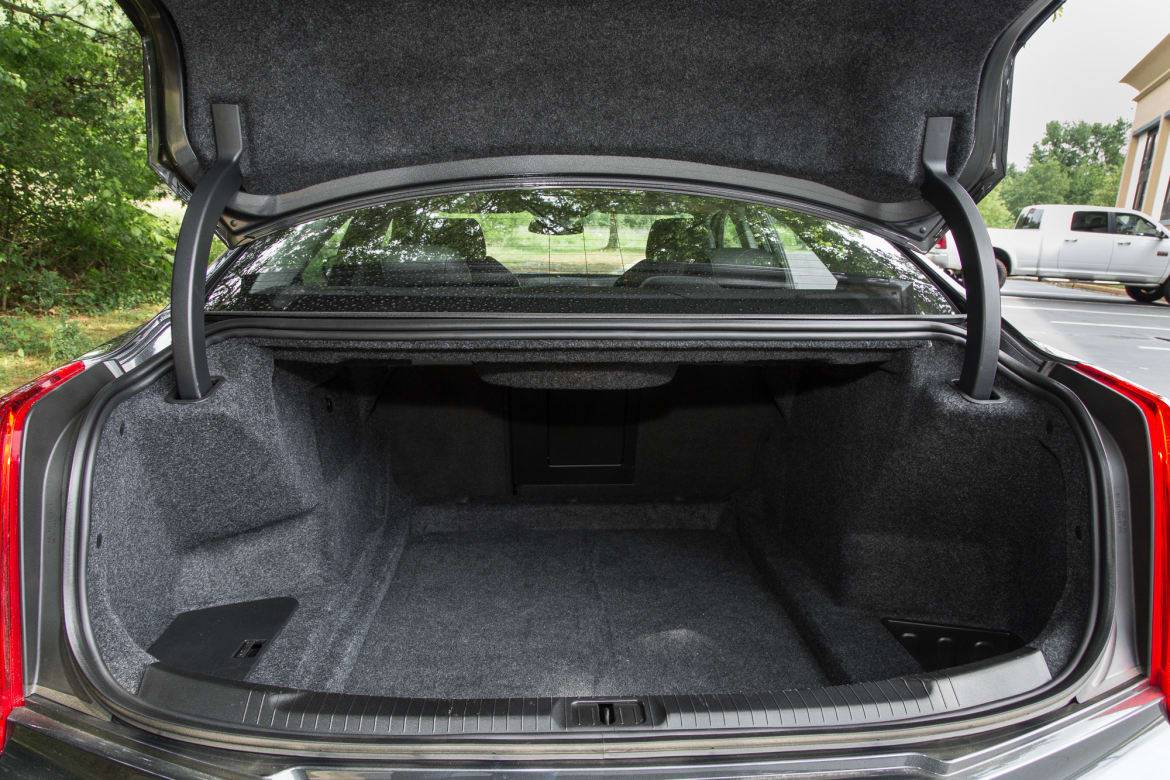 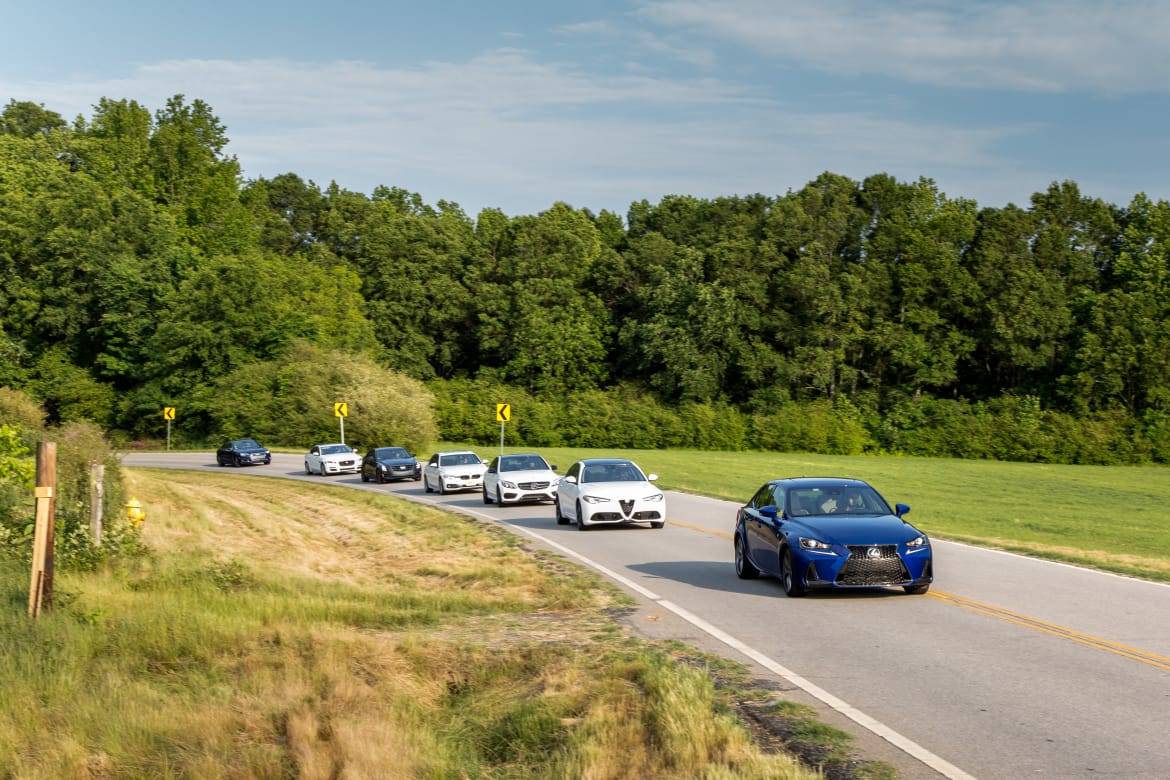 Despite being on the older side of the class, the 2017 Cadillac ATS holds its own against more recently redesigned compact luxury sports sedans. I tested the ATS during Cars.com’s Luxury Sports Sedan Challenge, in which we pitted the ATS 2.0L Turbo against the BMW 330i, Audi A4, Mercedes-Benz C300, Alfa Romeo Giulia, Jaguar XE and Lexus IS 200t. The ATS finished fourth, beating the BMW 3 Series and standing out in a few key areas.

Our 2.0L Turbo Luxury Coupe trim had rear-wheel drive and a new-for-2017 Carbon Black appearance package, which gave it the look of a mini ATS-V.

During the Luxury Sports Sedan Challenge, the ATS Sedan was a favorite of mine both on our tight handling course and while careening though the sweeping backroads of northern Georgia. The ATS wasn’t the fastest, but it had the most connected-feeling driving experience, with direct, natural steering that was perfectly weighted and acutely communicated what the front and rear of the car were doing. The way the rear-wheel-drive ATS hunkers down mid-corner and can slide around with the throttle exiting a corner is big fun.

The Cadillac ATS doesn’t ride too roughly at highway speeds, but it’s busy on less than perfect roads. The rear-drive spirited handling payoff is worth it, however. Competitors like the 3 Series and C-Class require optional suspensions to get the most sporting character out of them, while the ATS does it without any expensive suspension or ATS-V performance options. Our test car was equipped with the base suspension and all-season tires, so the experience would only intensify with the optional, higher-performance suspension, plus summer tires and a limited-slip rear differential.

A 272-horsepower, turbocharged 2.0-liter four-cylinder scoots the ATS to 60 mph in 6.2 seconds and to the quarter-mile in 14.3 seconds at 97.9 mph. That was quick enough for fourth place in our 60-mph sprint and third place in the quarter-mile; both times are nearly identical with the 2017 BMW 330i.

The Cadillac’s engine is strong and responsive, but it sounds gravelly compared with the smoother, more-refined sounds of competitors, including the BMW.

A six-speed manual transmission is standard, but the ATS Coupe we drove came with the eight-speed automatic transmission. Having eight gears in this class is now more normal than not. The Cadillac hiccupped during spirited driving and banged uncomfortably on upshifts, and at times wouldn’t downshift when I wanted it to in its more aggressive driving modes.

Our ATS Luxury didn’t have the steering-wheel-mounted paddle shifters that some of its competitors did, but rather a gear selector with a manual mode that wasn’t as quick-shifting as others. Paddle shifters are available on the ATS, but the Luxury trim we tested doesn’t have them.

The Cadillac ATS puts the “compact” in compact luxury sedan. Its backseat is tiny compared with bigger-overall cars like the Audi A4 and Mercedes-Benz C300, and it’s made worse by the optional, bulky Recaro front sport seats. Those Recaros are spectacular at keeping you planted while throwing the car around corners — and they look cool, too — but their heavily arched backing cuts into backseat room, and the lack of adjustable head restraints makes the fitment questionable for some.

Even without the Recaros, seating both in front and back feels narrow and snug. The ATS’ 10.4 cubic feet of trunk space is small compared with the 13 cubic feet in competitors like the Audi A4 and BMW 3 Series. You can compare them all side by side here.

Even if the new Cadillac ATS is on the snug side, its quality makes it a nice place to be for the as-tested $45,830 – the midsize CTS and CTS-V are longer. Materials are soft and appropriately luxurious (though not class-leading), and the optional Carbon Black appearance package adds real carbon-fiber interior accents.

The interior’s downfall is the center dashboard’s piano-black face and dull-silver touch-sensitive buttons; the look isn’t as luxurious as an Audi A4’s high-quality dials, tactile controls and digital readouts. The Cadillac’s whole touchscreen faceplate flips up to reveal a small storage cubby that’s made smaller by an optional wireless charging pad. The feature cheapens the interior because it’s not a very rigid construction, exhibiting lots of play while opening and closing.

Cadillac has been hit with complaints from both us and consumers over its complicated Cadillac User Experience system for controlling multimedia, vehicle and climate systems, but there’s now a decent workaround at least for the media and phone aspects in the form of standard Apple CarPlay and Android Auto. The integrations of each are designed to incorporate your phone’s navigation into the main touchscreen. They also make streaming audio, making and taking calls, and voice texting easier by acting as their own interface, circumventing some of CUE’s annoyances. It’s not a fix for everything, considering the whole center dashboard is filled with capacitive controls that are still more demanding to use than a regular volume knob, but it’s a decent workaround.

The National Highway Traffic Safety Administration gave the ATS its highest overall rating of five stars. The ATS hasn’t yet been tested by our preferred test organization, the Insurance Institute for Highway Safety.

Several crash-avoidance technologies are offered, though few were equipped on our $45,000 test car. A lane departure prevention system, forward collision warning with automatic emergency braking, and blind spot warning are all optional. A backup camera is standard on all trims, and the Luxury trim we tested included front and rear parking sensors.

Is the ATS Worth It?

Our $45,830 as-tested Cadillac ATS was the least expensive car in Cars.com’s Luxury Sports Sedan Challenge. That’s significant because the ATS didn’t lack important convenience features compared with more expensive competitors, and it finished a respectable fourth out of seven cars. A heated steering wheel, real leather seats (not leatherette like the BMW and Mercedes we tested), wireless phone charging and Apple CarPlay and Android Auto smartphone integration are all part of the as-tested ATS, which also packs an undeniably good driving experience.

The Cadillac ATS didn’t finish higher than fourth because its small size affected front and backseat scores, cargo room and Car Seat Check scores. It’s not a sedan that pulls off family duty as easily as larger competitors, and even as a second car to an SUV, the ATS would be pushing it for occasional family use. Still, you get a lot for the money. Our judges scored the ATS an 8.5 out of 10 on the value scale, which topped all competitors.