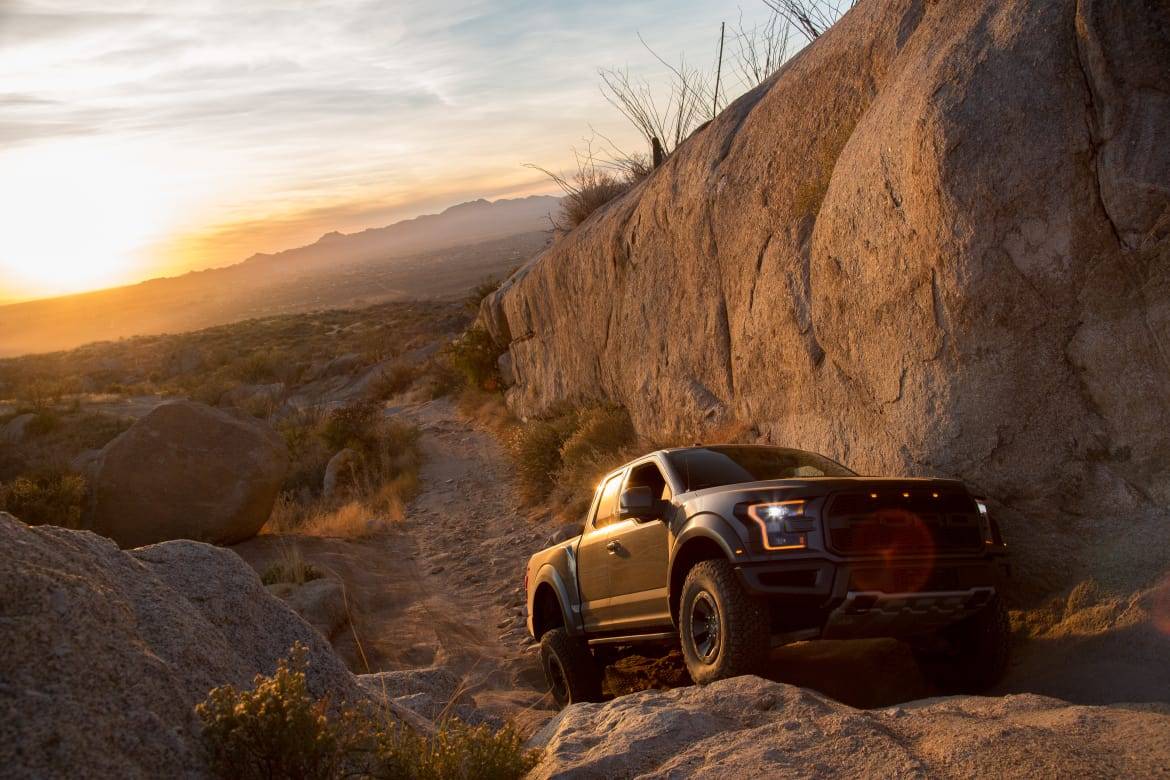 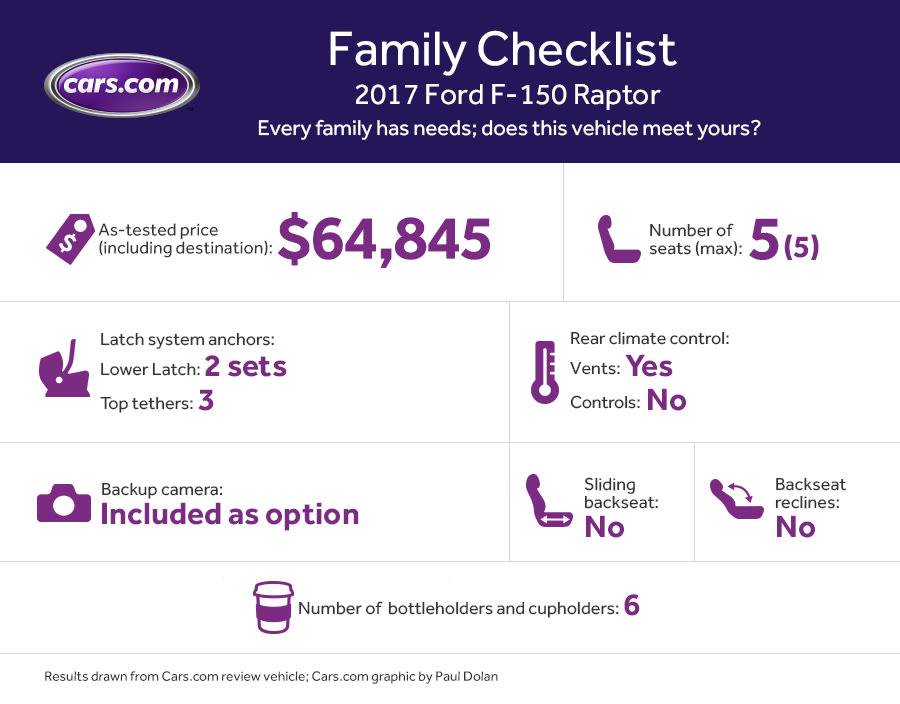 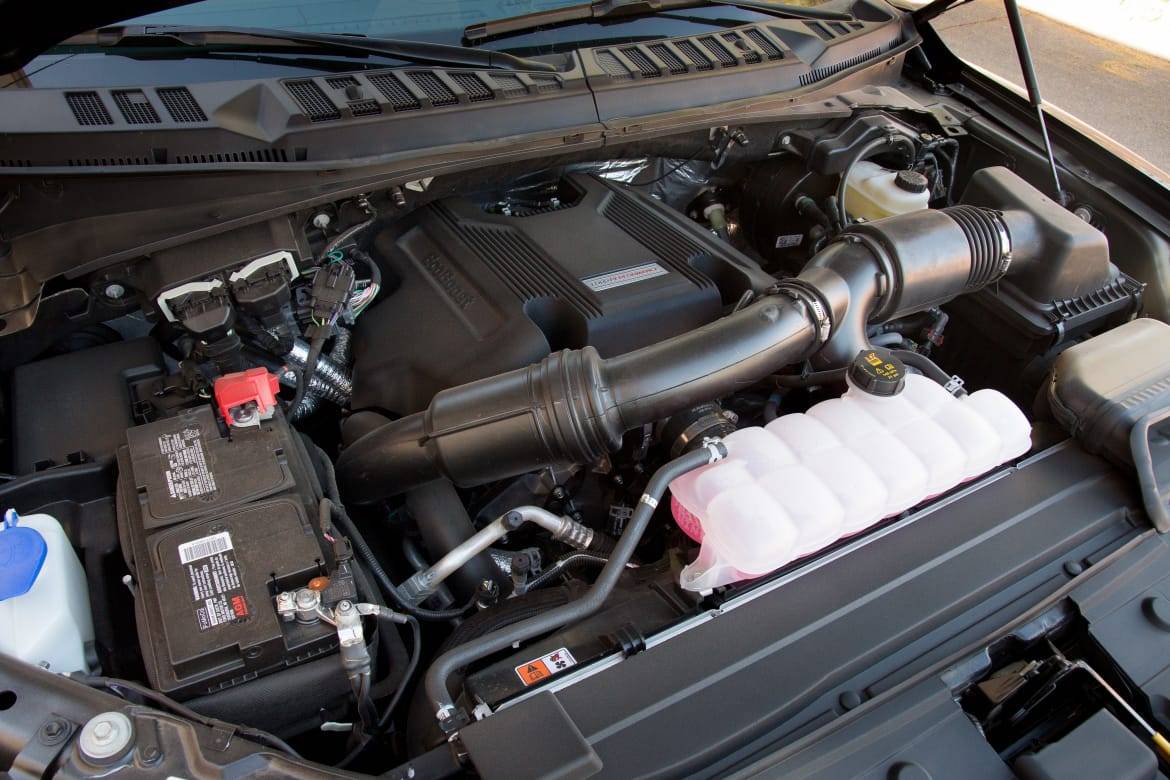 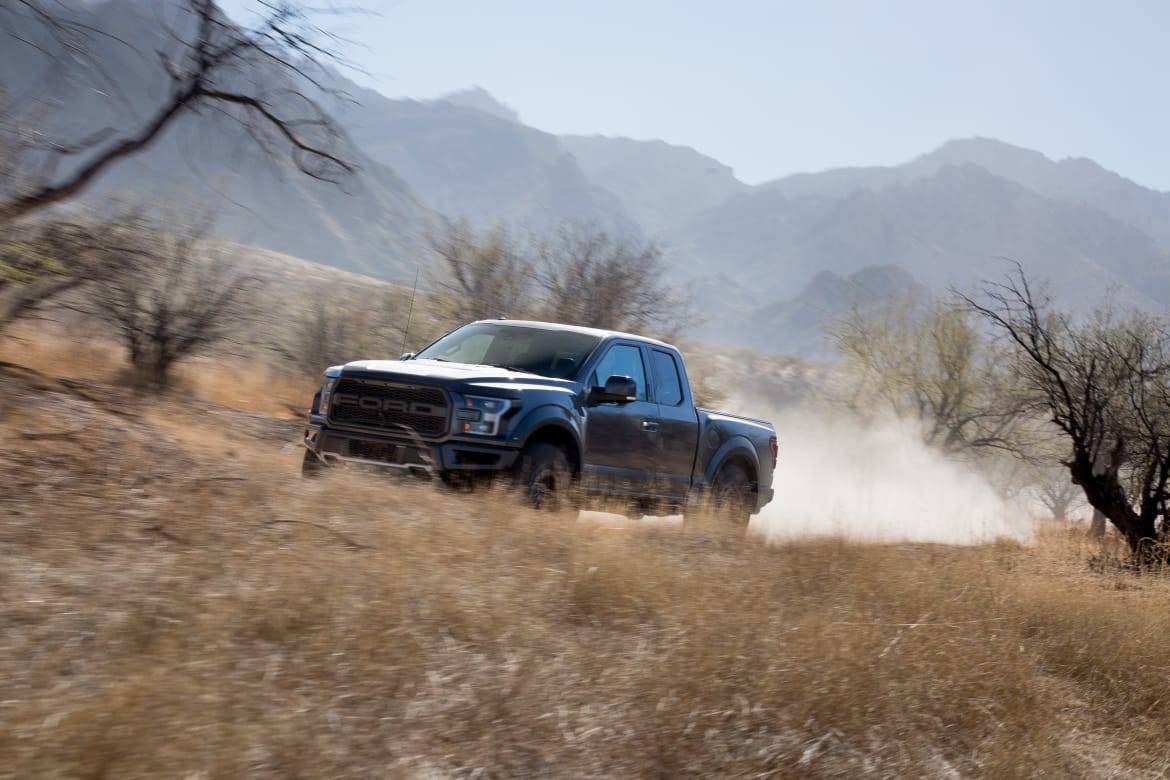 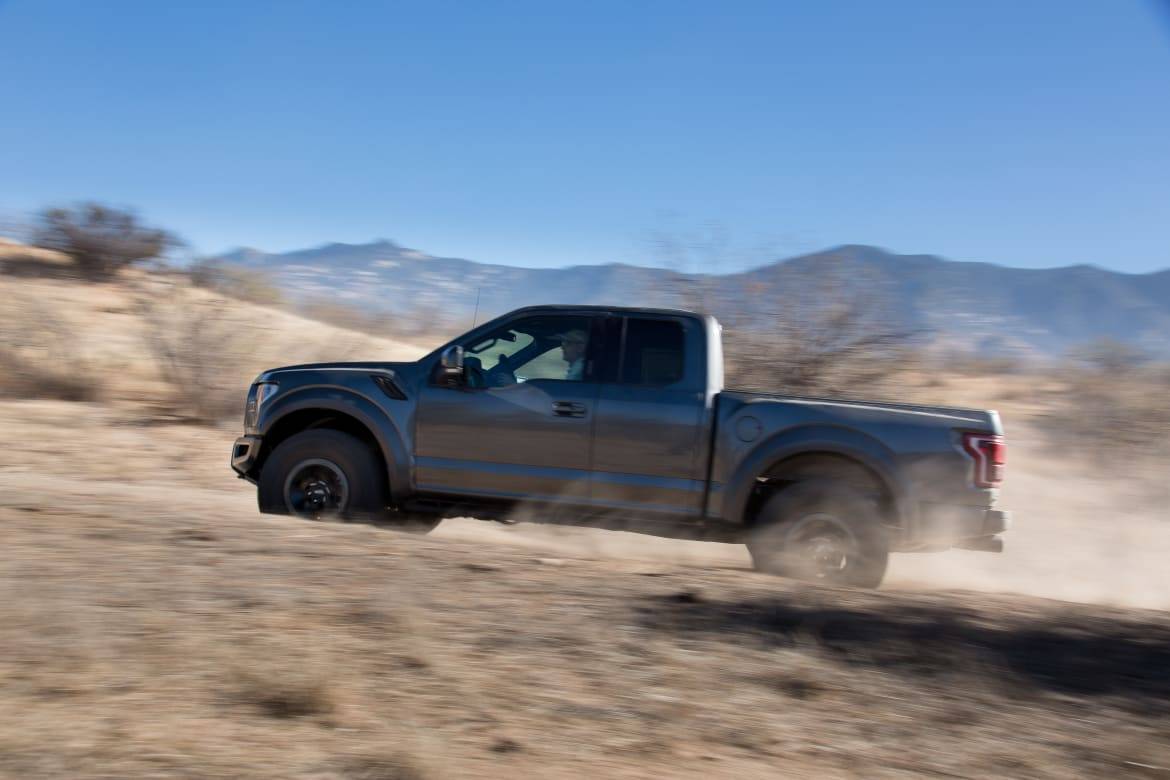 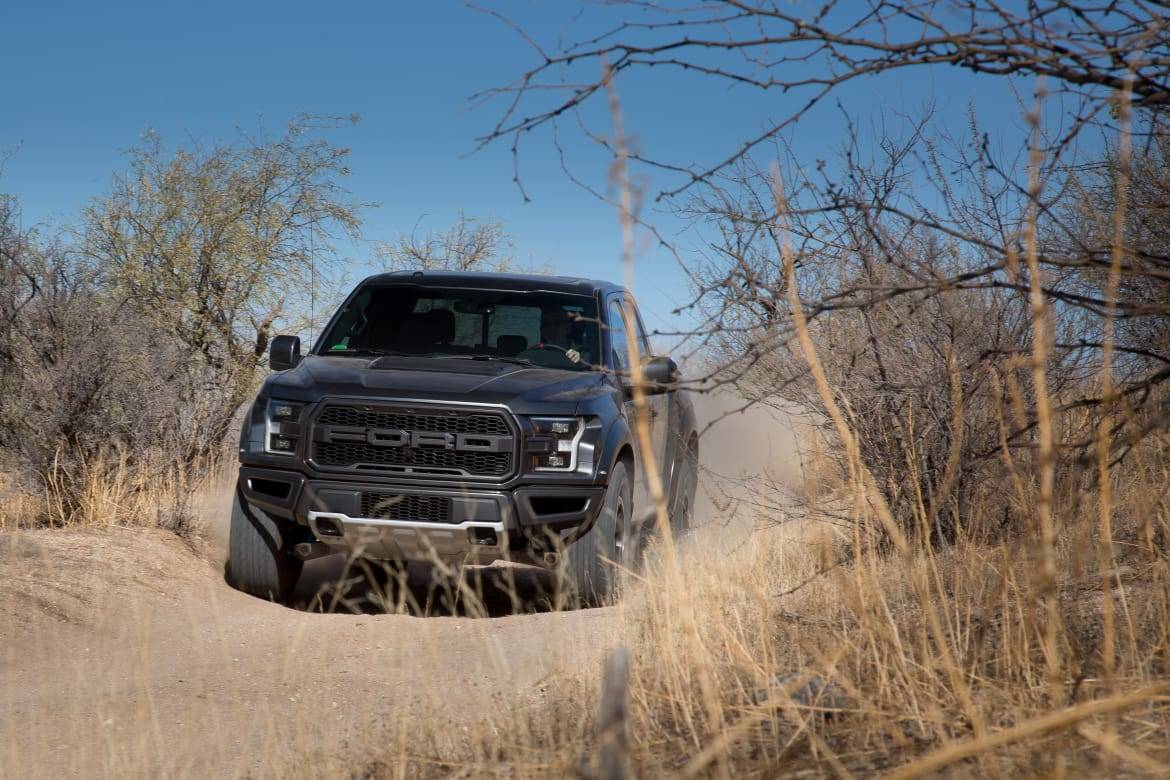 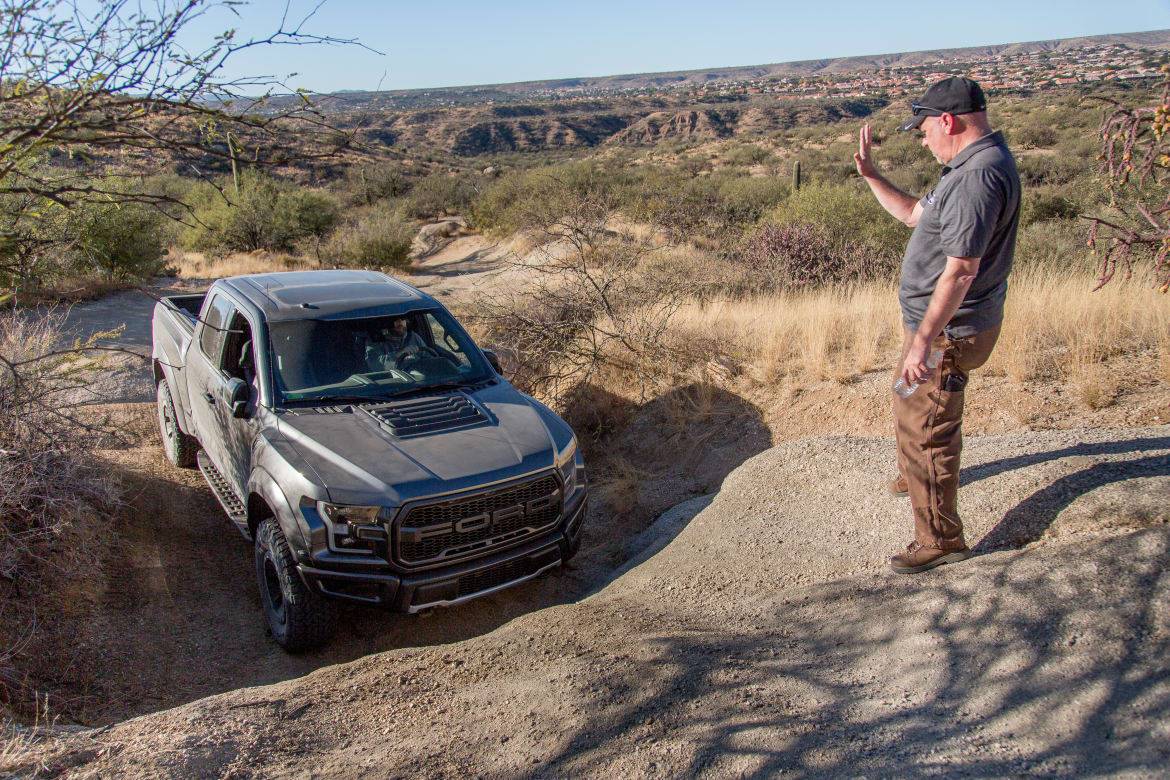 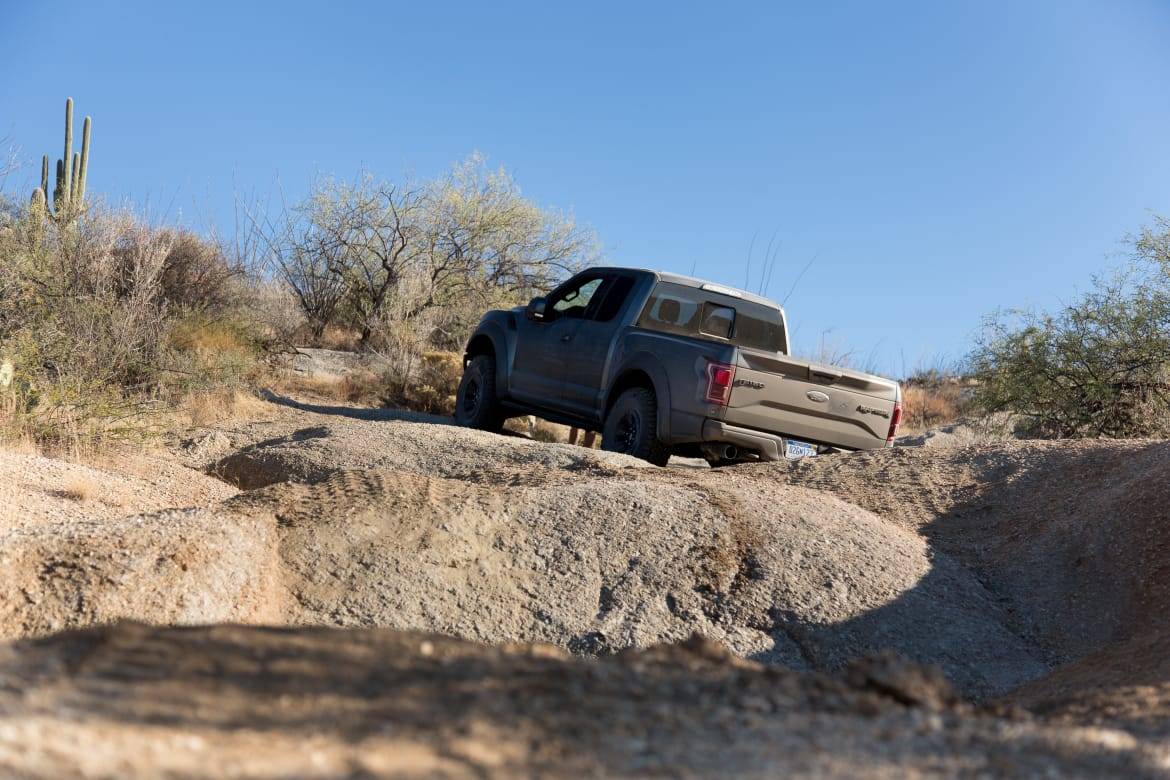 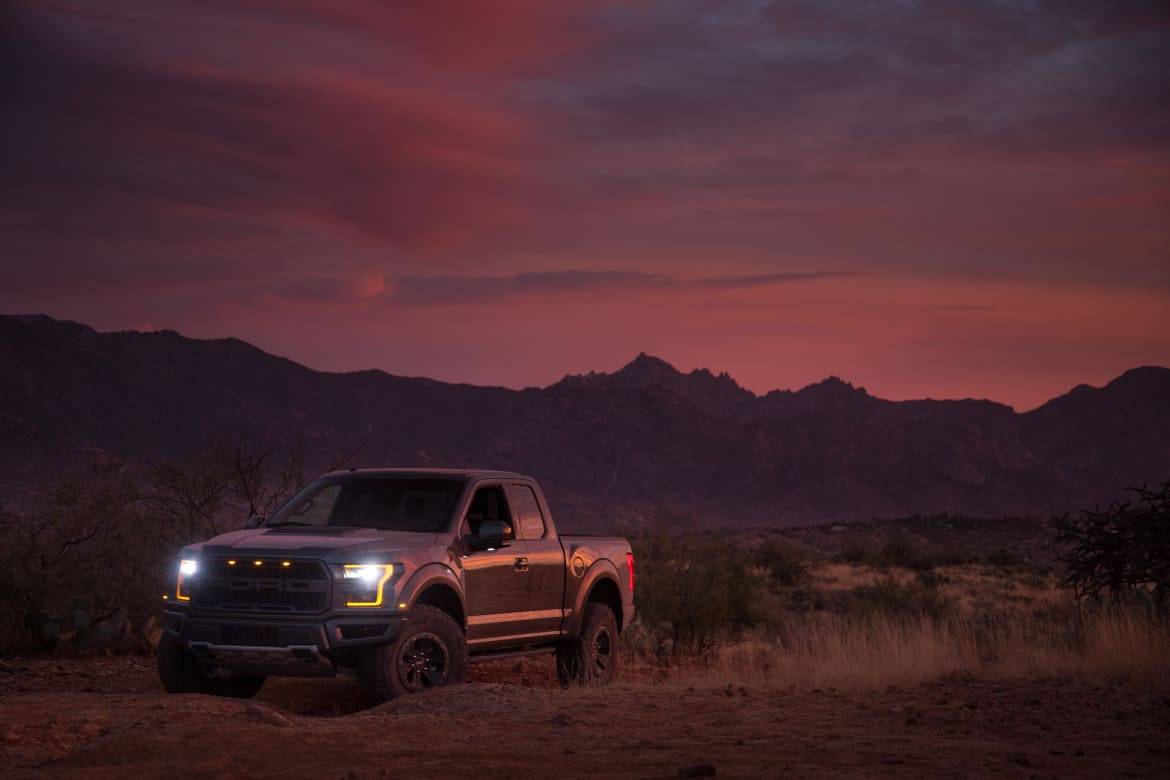 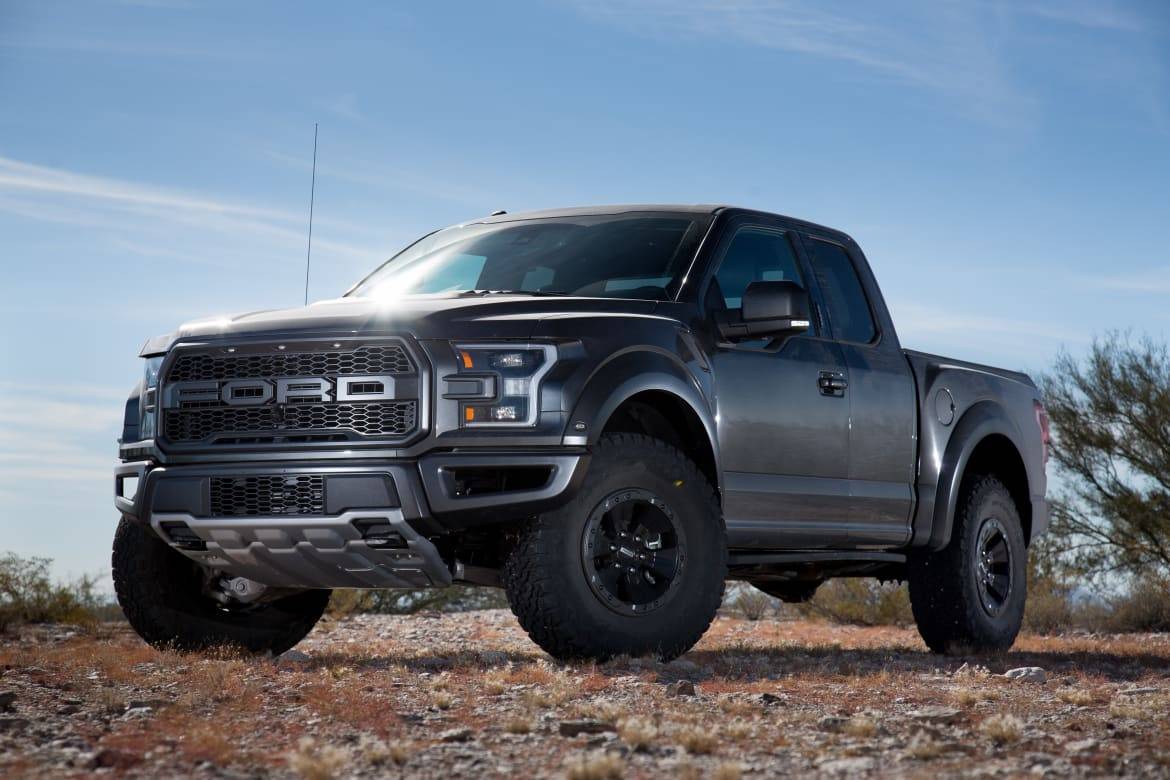 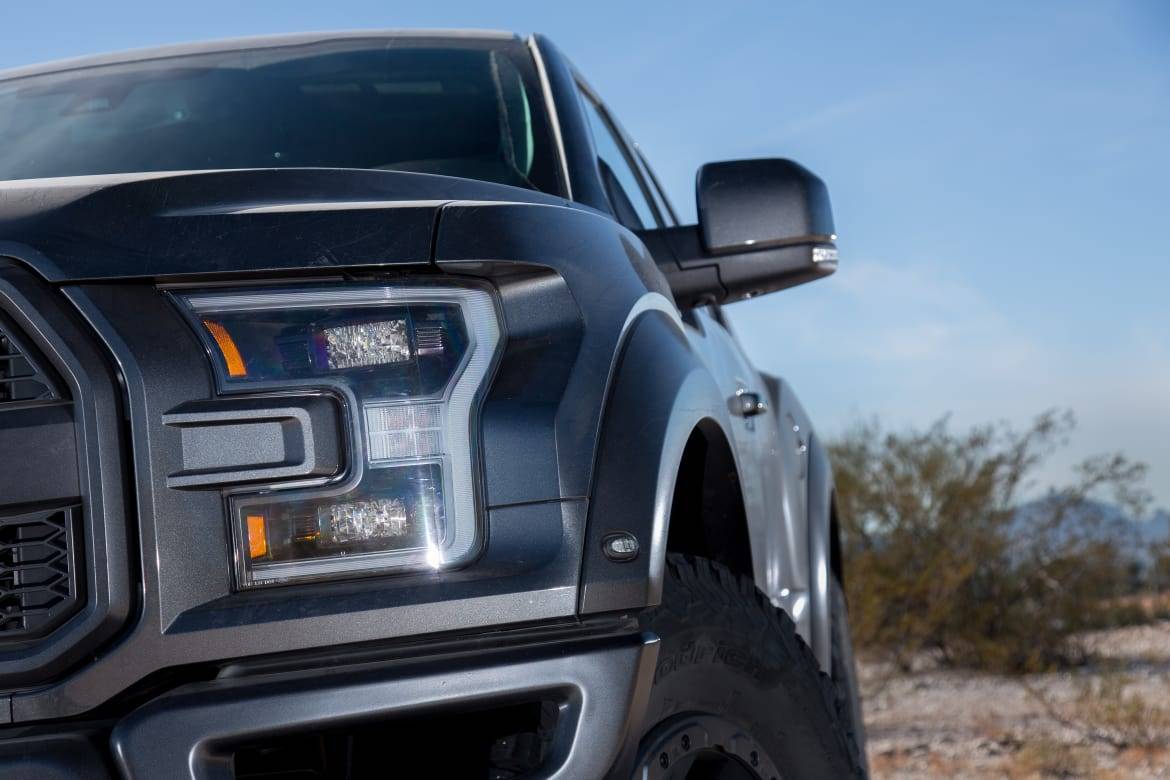 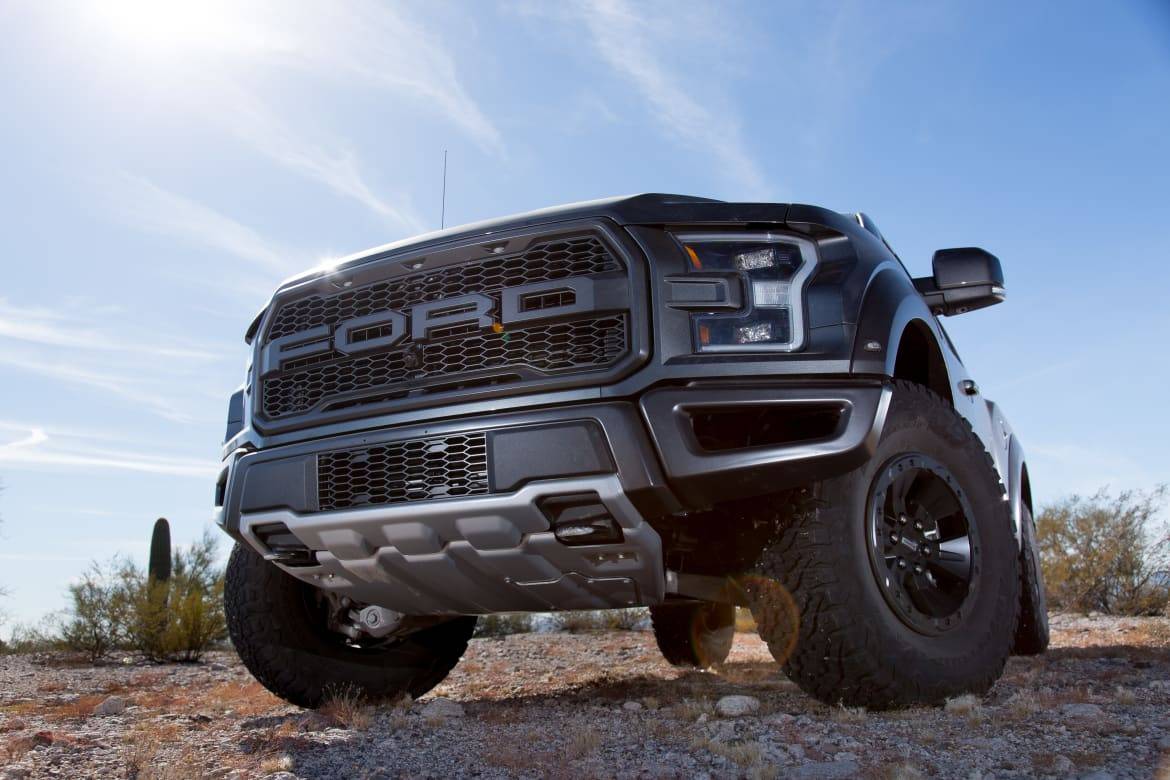 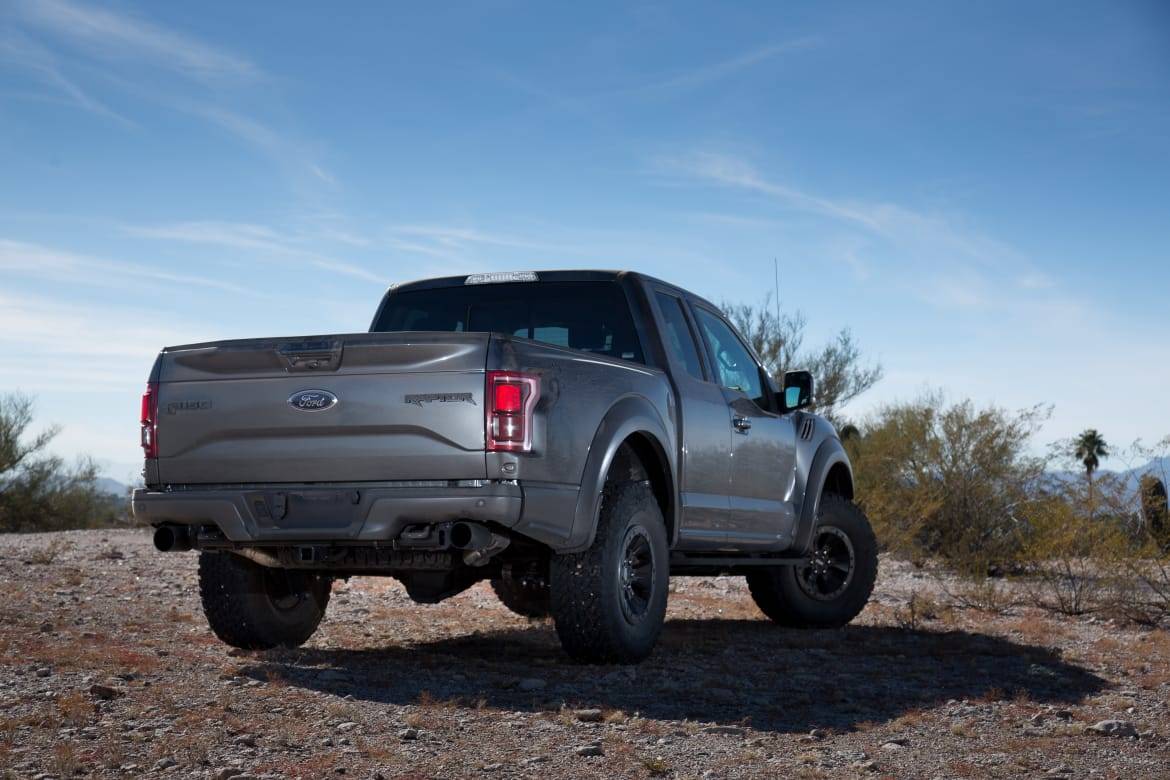 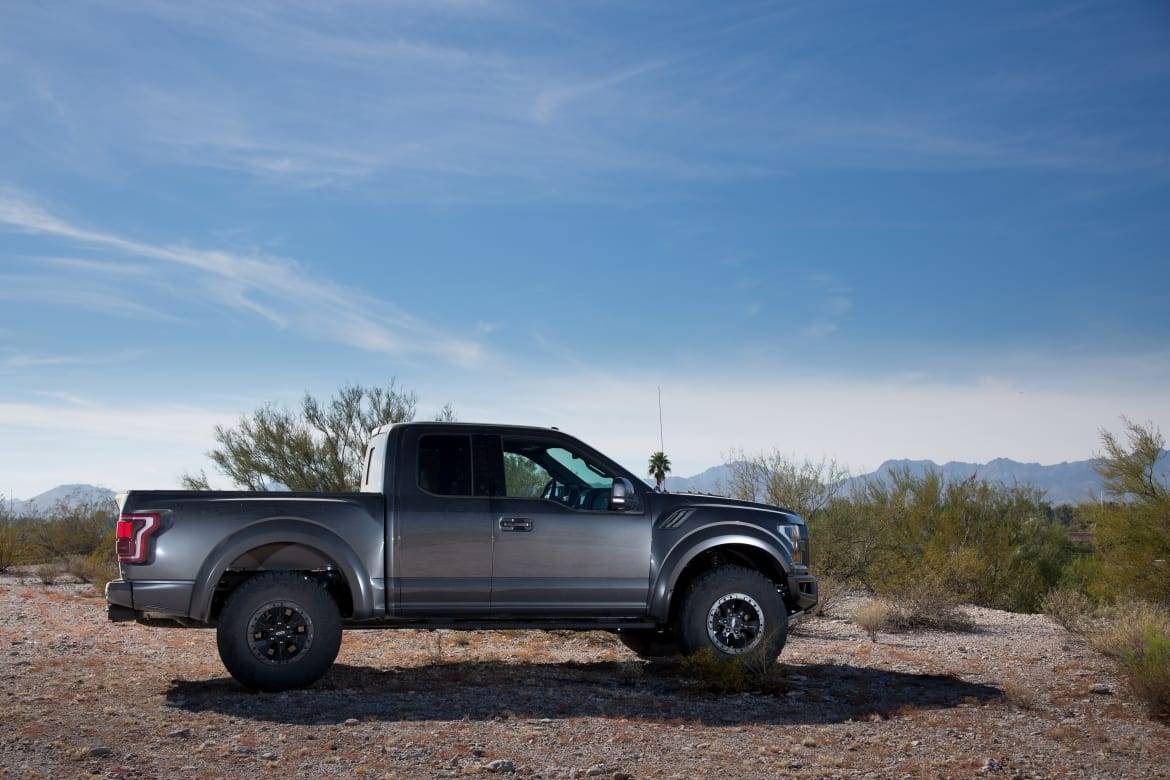 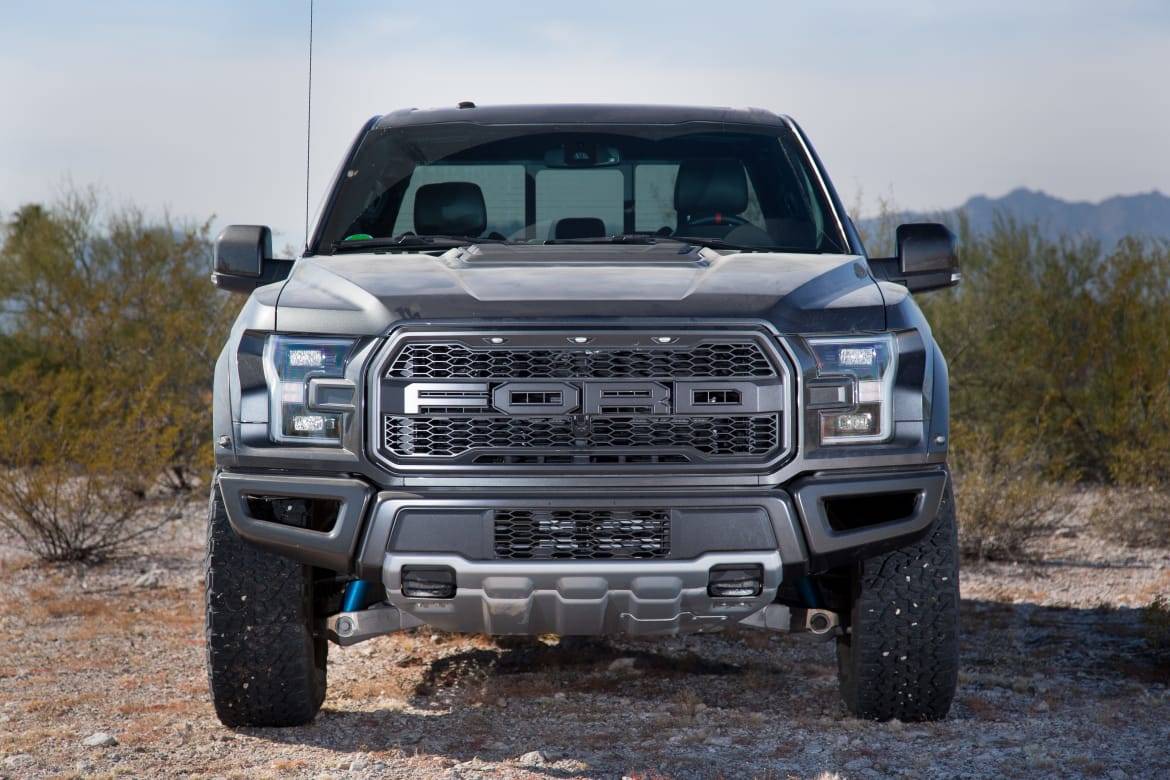 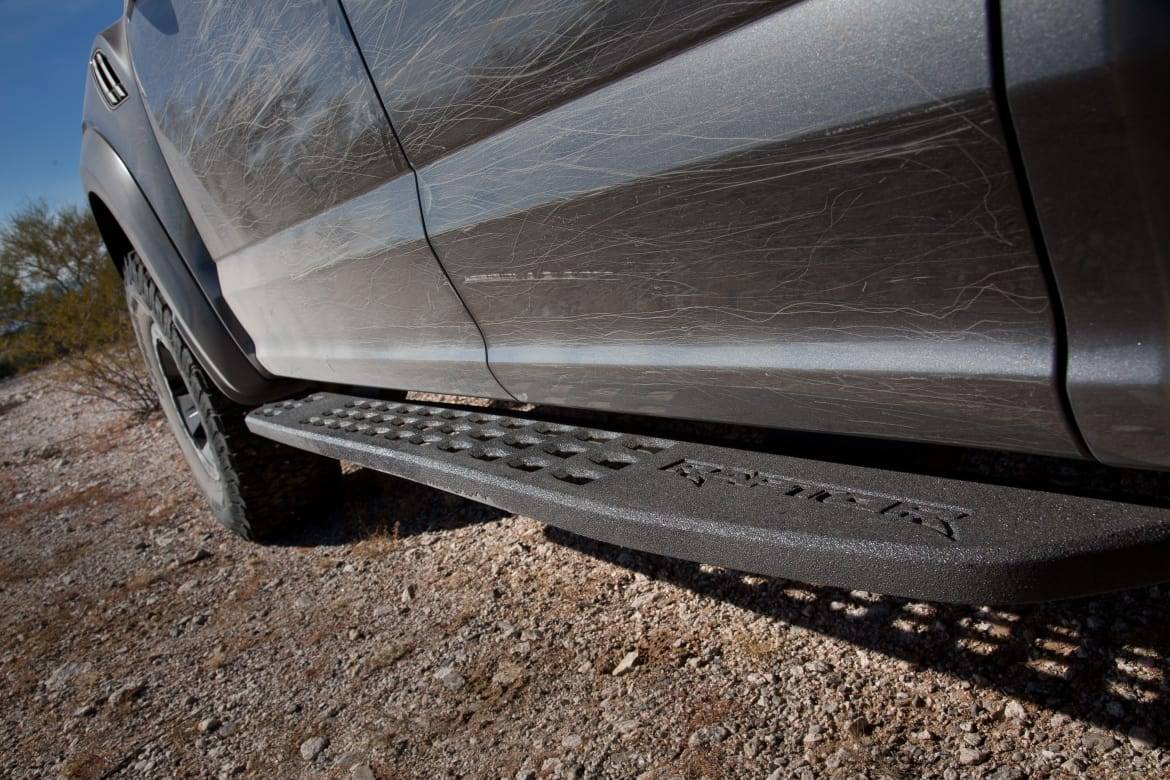 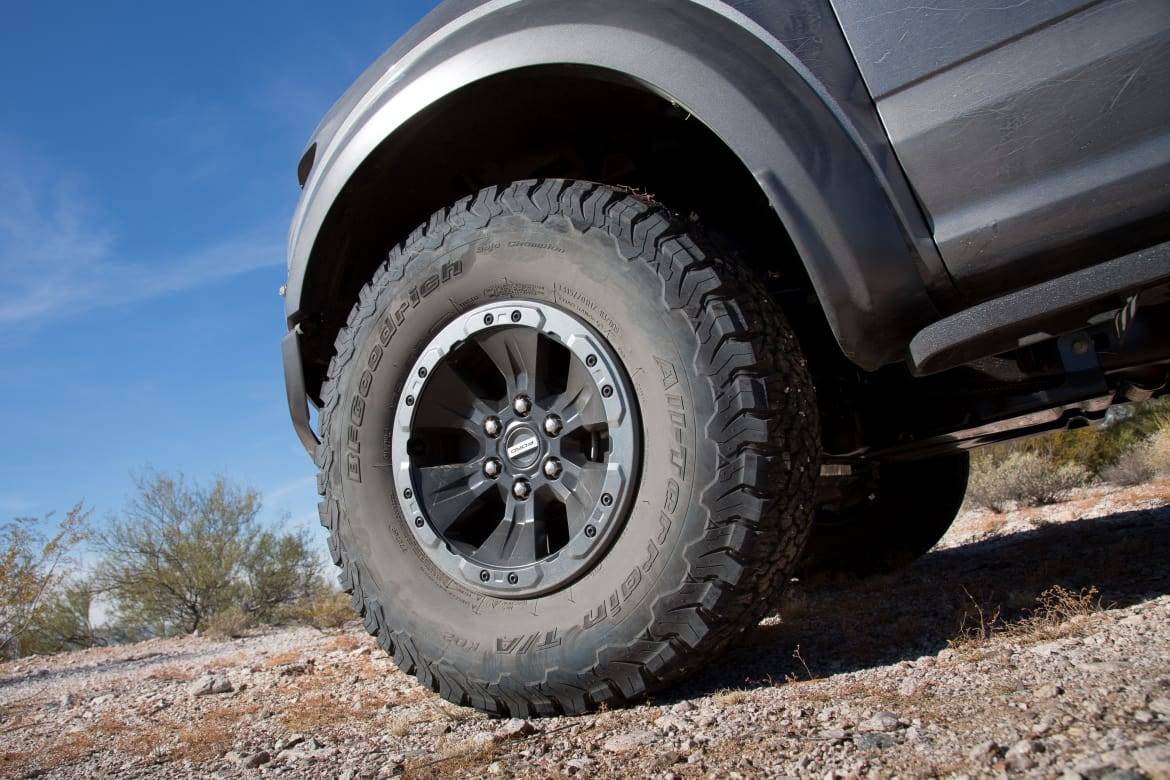 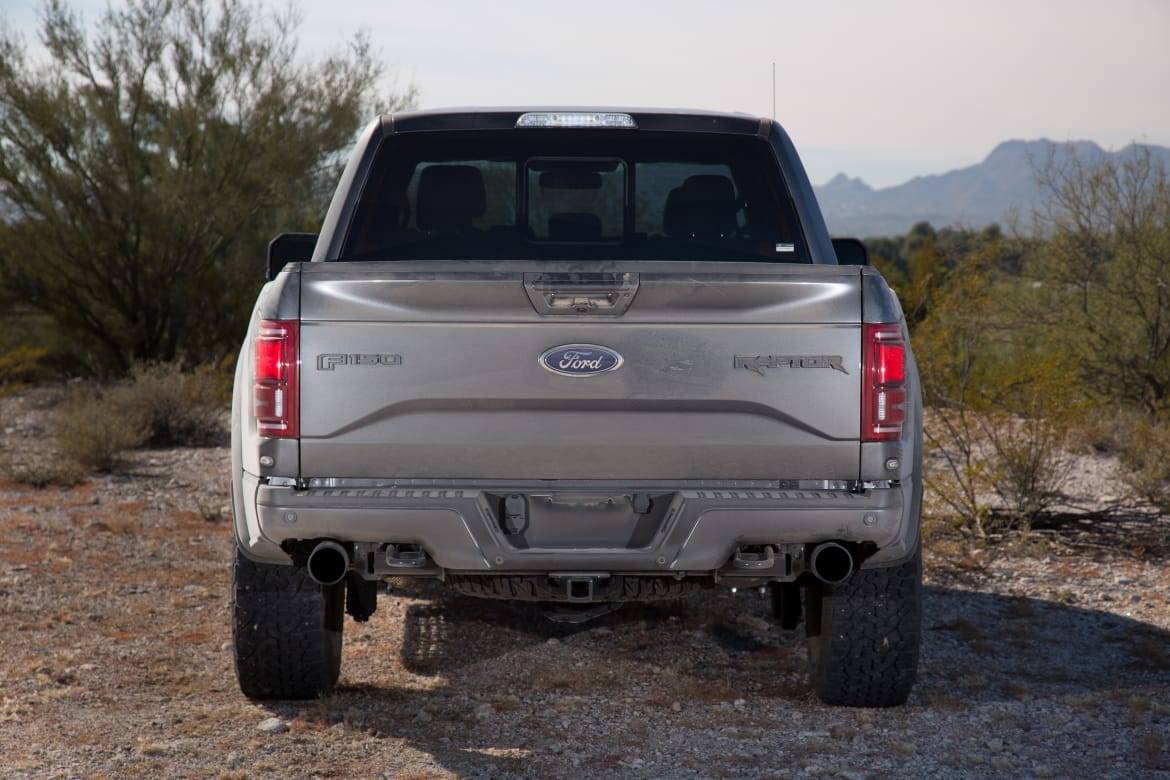 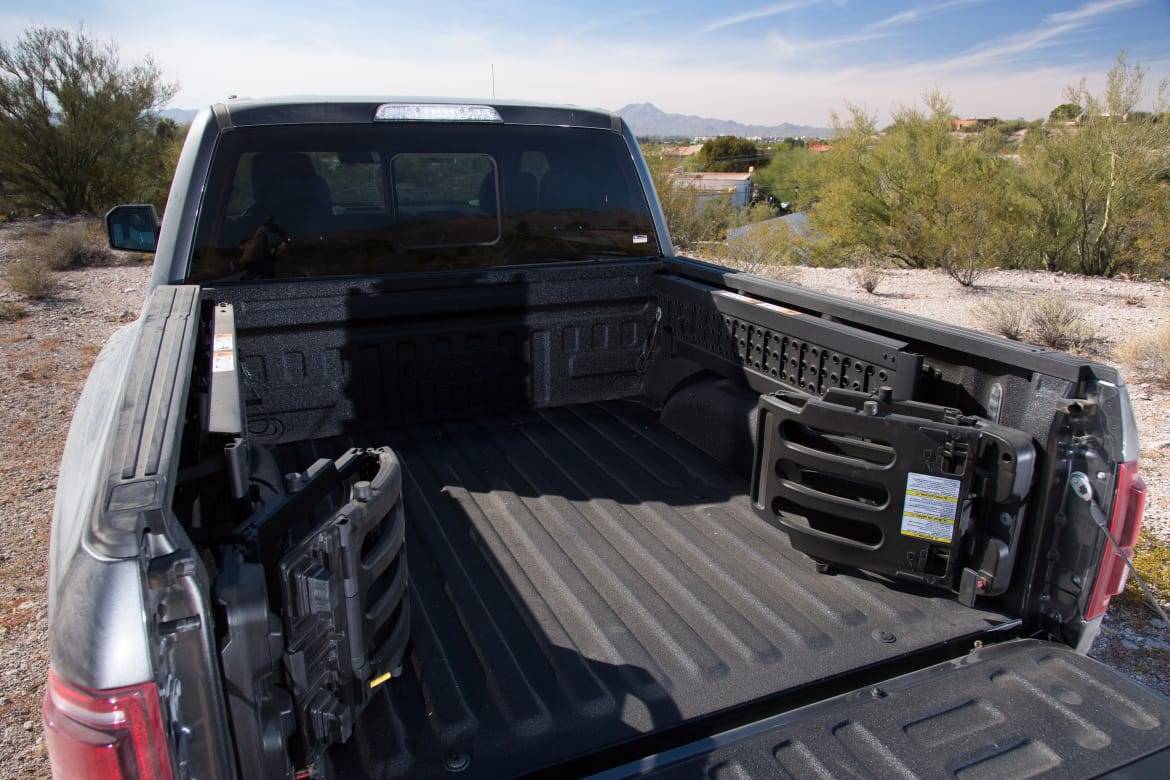 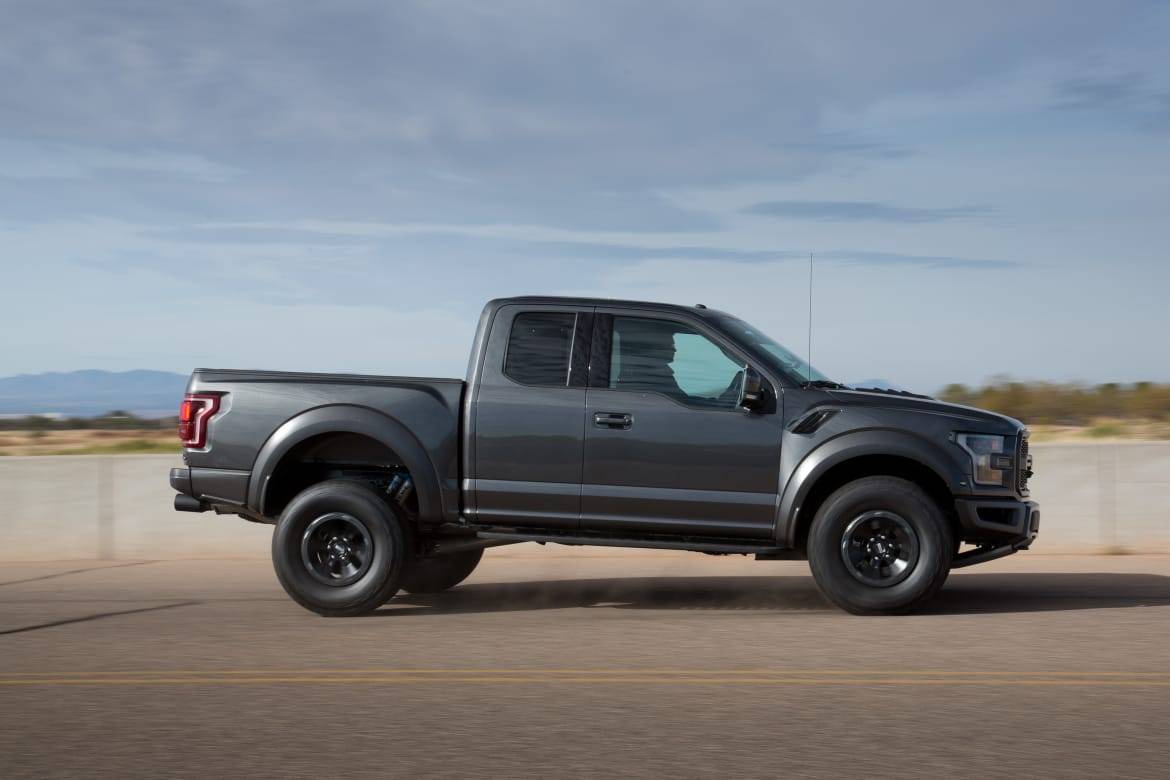 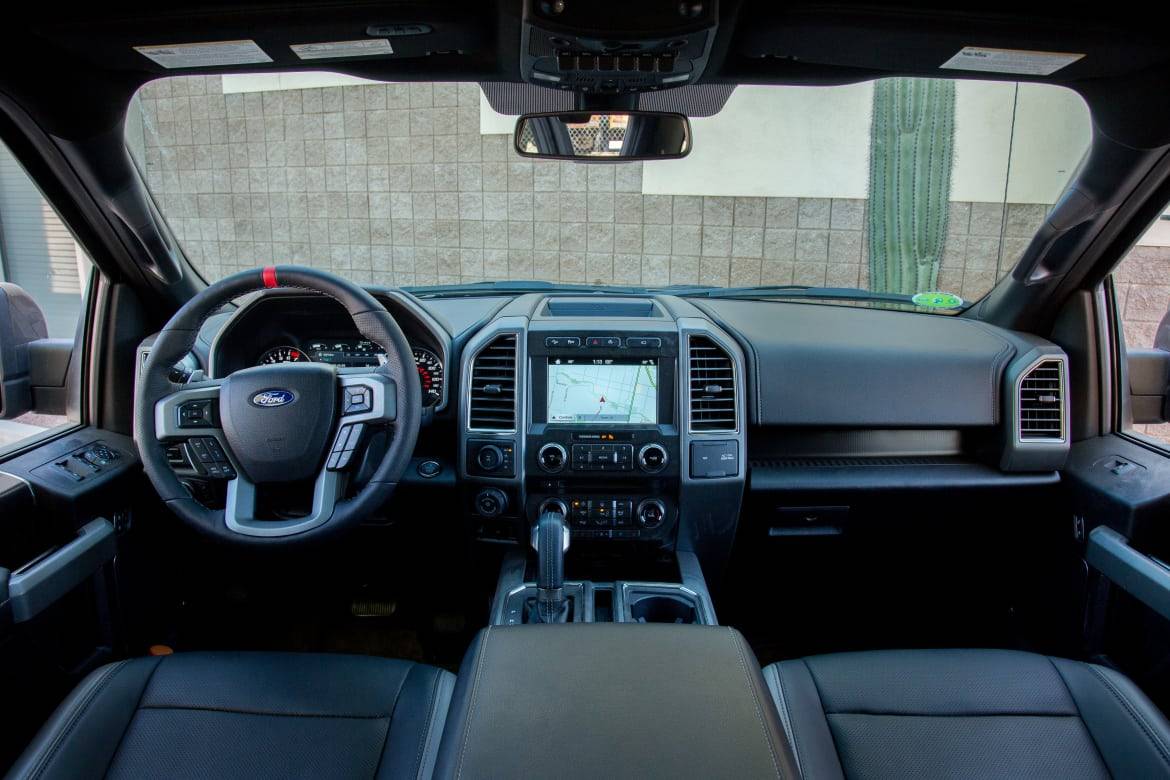 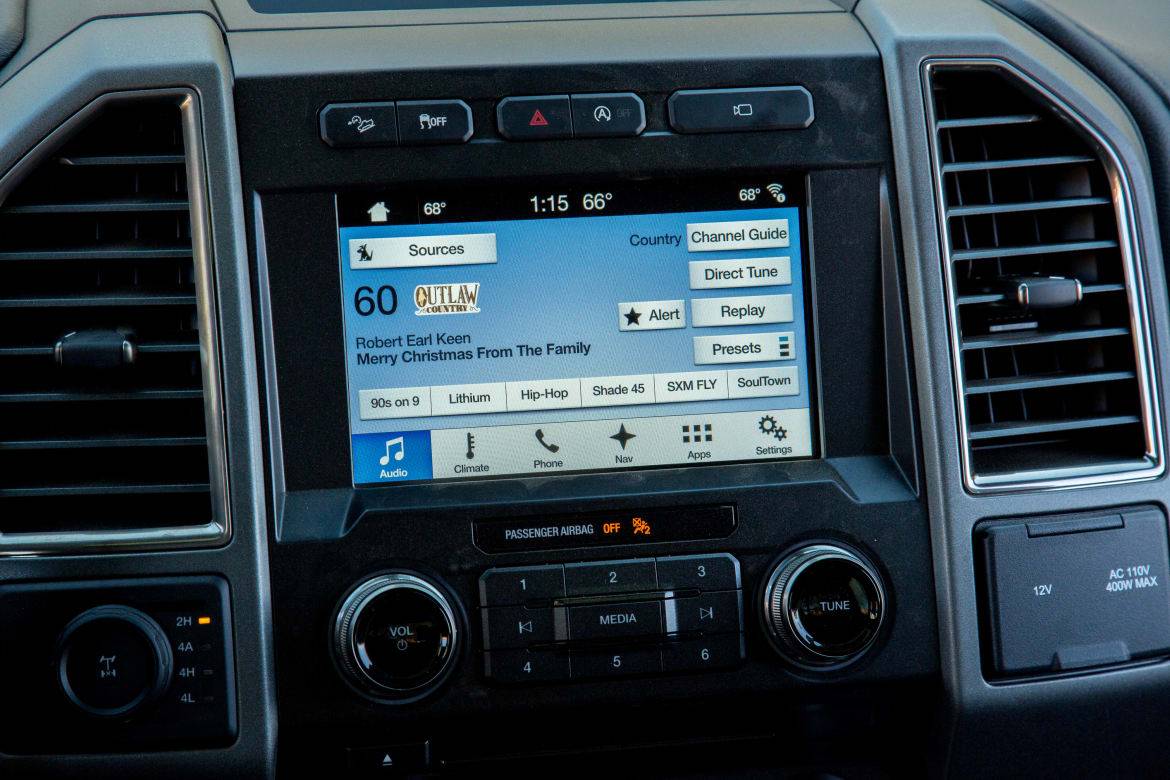 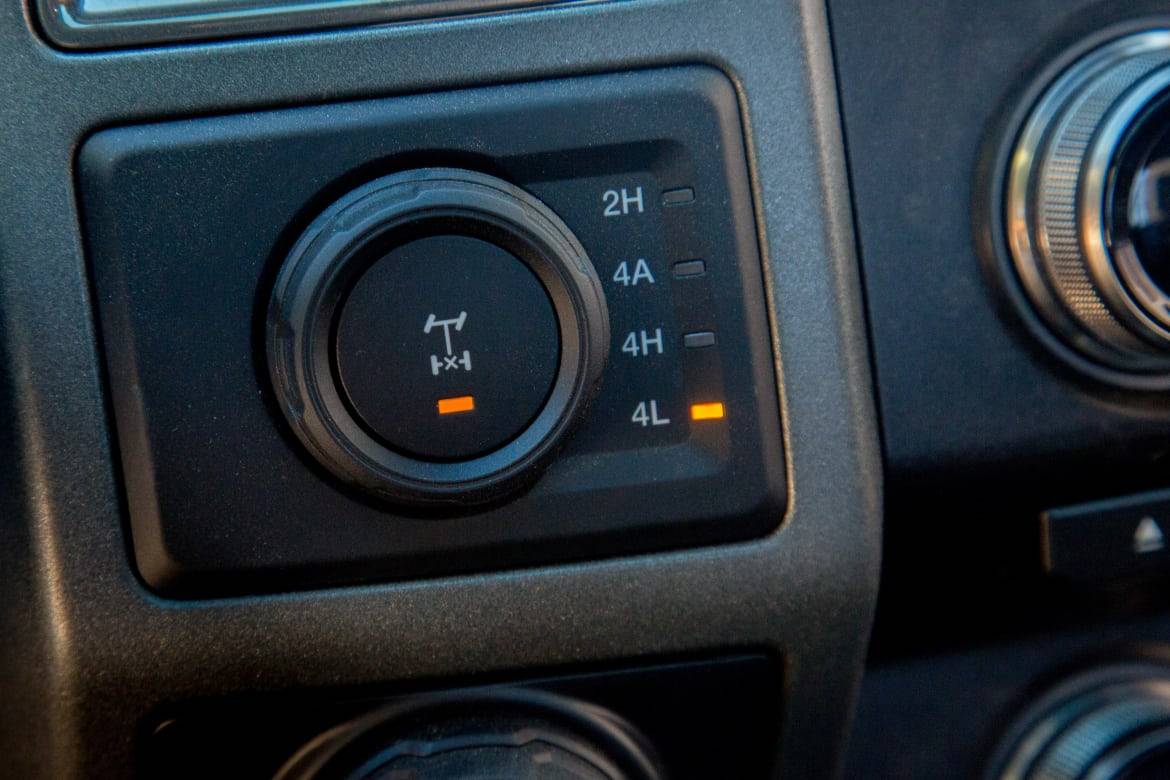 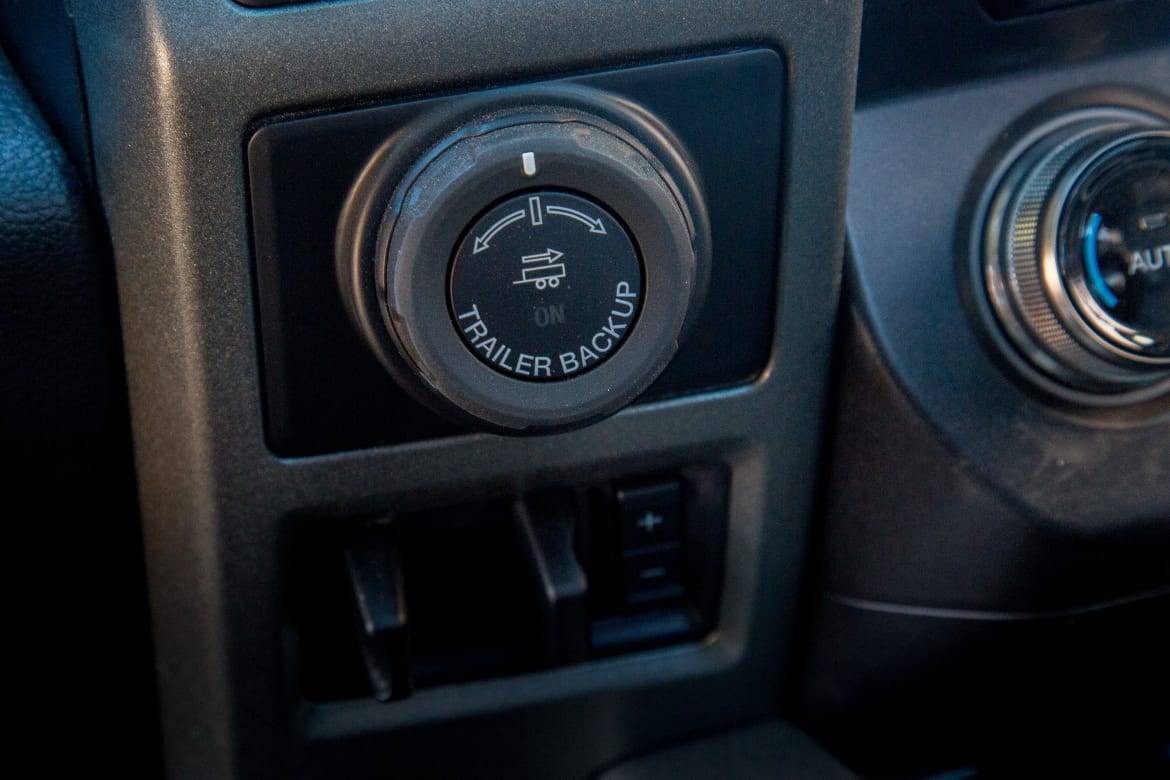 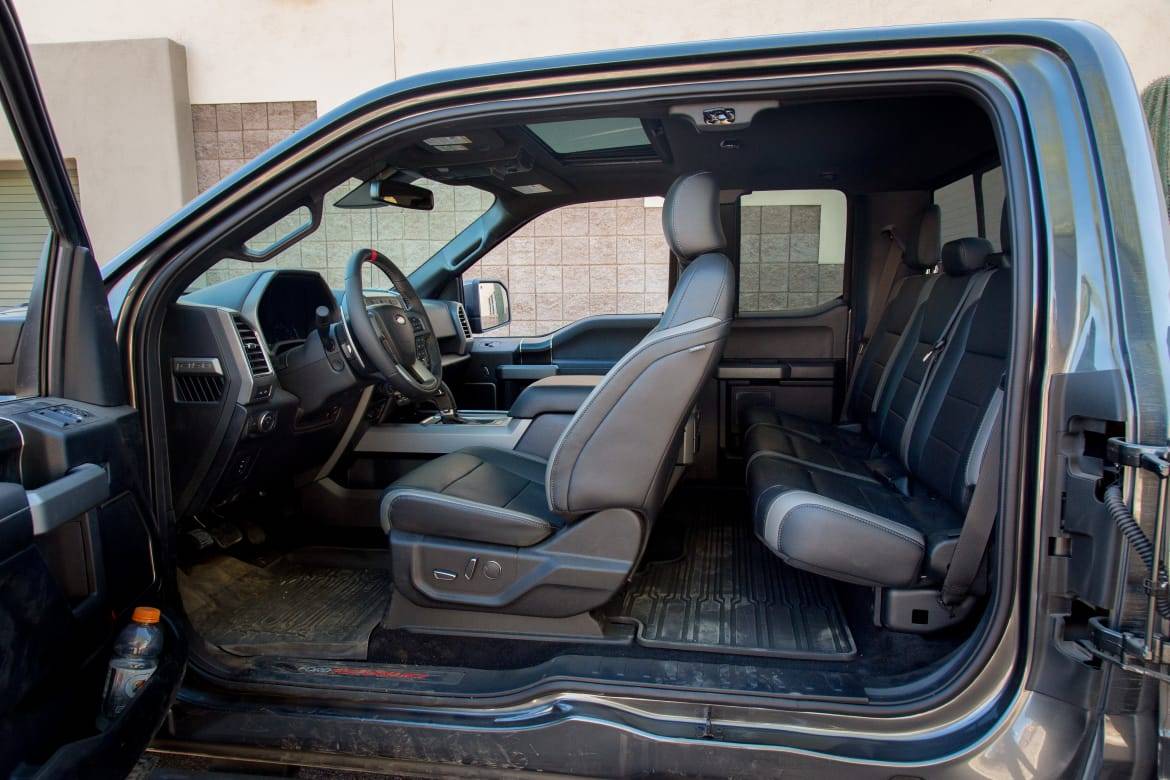 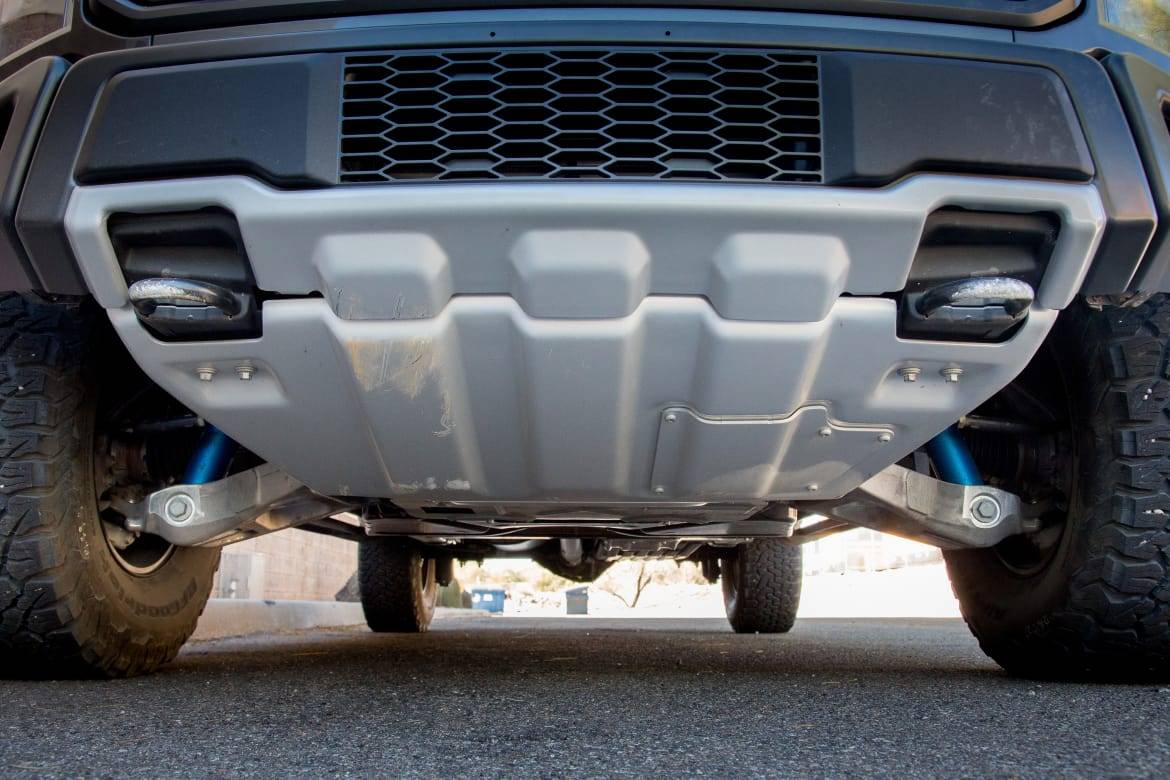 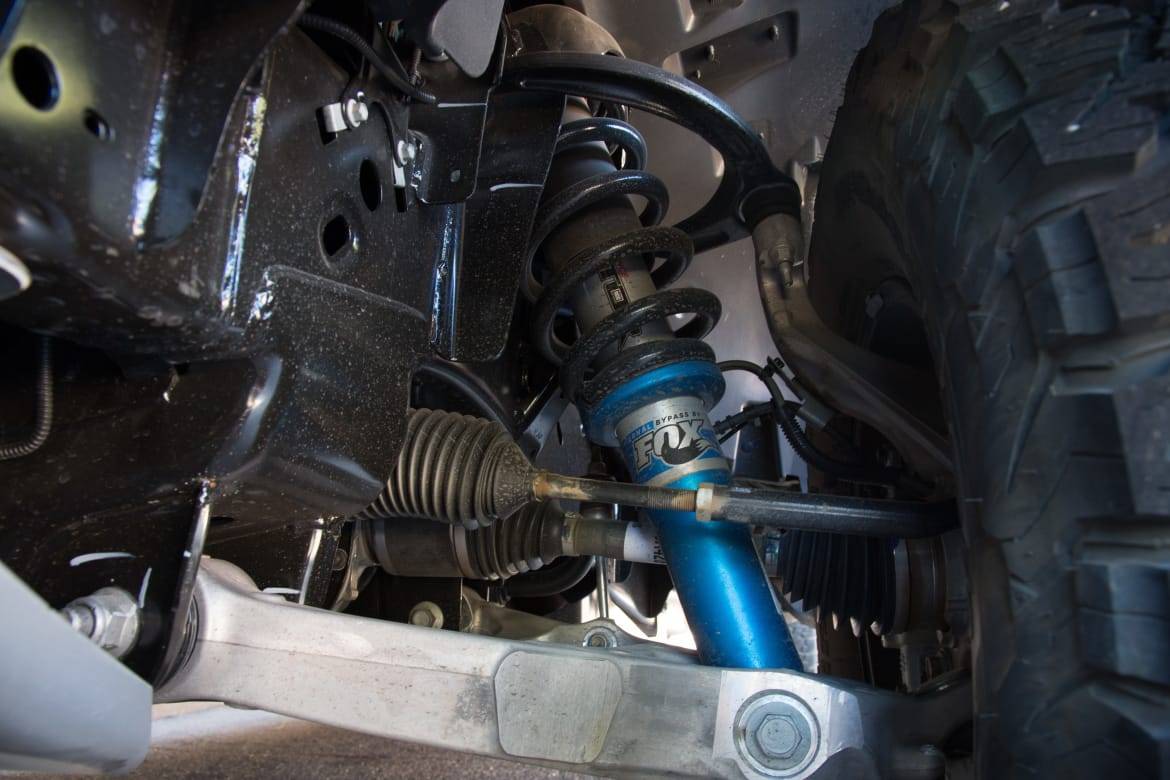 If Ford’s off-road 2017 F-150 Raptor has an on-road equivalent, it would be the 2017 Ford Shelby GT350 Mustang. The Raptor has been engineered like a specialty sports car and built with very specific and purposeful parts; it’s not just a shock-absorber-and-wheel package like the bulk of the off-road models.

The Raptor has a new, higher-output version of Ford’s EcoBoost V-6, a borderline race-truck suspension, strengthened frame and supercar-wide tires with more knobs than a Home Depot. The Raptor is perhaps one of the most singularly focused new trucks. Off-roaders such as the Toyota Tundra TRD Pro and Nissan Titan Pro-4X can do light-duty stuff, and the Ram 2500 Power Wagon is perhaps the Raptor’s closest competitor in terms of go-anywhere capability. Compare the Ford Raptor with its competitors here. We tested all of them in our 2017 Monster Factory Off-Road Challenge.

Available in SuperCab extended-cab and SuperCrew crew-cab body styles, the Raptor starts at $50,155 and $53,140, respectively, including destination charges. I tested a Raptor SuperCab totaling $64,845.

Adjectives like “aggressive” and “menacing” don’t appropriately convey the Raptor’s presence. The 2017’s stance is more like, “Eff you.” Huge, meaty tires fill the fenders like a desert racer and the 6 inches of additional track width compared with its predecessor produces a stance similar to a trophy truck. Darkened Raptor-specific front and rear bumpers provide plenty of approach and departure angle, and the front skid plate is imposing and functional.

The 17-inch wheels wear BFGoodrich All-Terrain T/A KO2 tires spec’d to an ultra-wide 12.4 inches (315/70R17) and terrain-absorbing 34 inches tall. Like the previous Raptor, the optional forged-aluminum wheels are bead-lock ready to operate in single-digit tire pressures for extreme rock crawling. In a traditional wheel/tire combination, air pressure keeps the tire secure to the wheel, but a bead-lock wheel mechanically secures the tire to the wheel by squishing the tire’s mounting surface (the bead) between the wheel and a locking ring. With the Ford Performance bead-lock kit, the tires can be aired down for increased contact patch without risking the tire separating from the wheel.

The Raptor is seriously quick. Not only do you get a dedicated off-roader in this package, but the Raptor has acceleration reminiscent of a Ford SVT Lightning or Viper-powered Dodge Ram SRT-10. In the Raptor, a 3.5-liter EcoBoost V-6 produces 450 horsepower and 510 pounds-feet of torque, impressively harnessed by an all-new 10-speed automatic transmission. The 10-speed unlocks the EcoBoost engine’s full potential. Stab the accelerator from a stop and the Raptor pounces off the line unlike any EcoBoost truck I’ve tested. With its twin tailpipes, this version of the EcoBoost sounds meatier than previous versions, but the interior engine noise is noticeably digitized, augmented through the stereo.

During our recent Off-Road Challenge, we clocked zero-to-60 mph in 5.7 seconds and the quarter-mile in 14.2 seconds at 96.6 mph. The closest you’ll get to this kind of acceleration from a new truck is the GM half-ton twins with the optional 6.2-liter V-8 and eight-speed automatic, and they’re not very good off-road. Ram’s Power Wagon may have a go-anywhere capability, but its acceleration is poky and there’s no thrill in hitting the accelerator like the Raptor.

One of the only ways the Ford F-150 Raptor indicates it has 10 gears is the vertical gear readout on the dashboard; otherwise, the transmission feels completely natural. Sometimes the transmission didn’t kick down appropriately to match the acceleration I wanted in Normal driving mode, but in Sport mode, the transmission quickly kicked down from 10th to 4th.

Gear ratios are, of course, important in rock crawling and low-speed off-road driving, and the wide range of ratios provides plenty of options to get around obstacles. The Ford Raptor’s aggressive 1st gear (4.70) and 4.10 axle ratio, combined with the transfer case’s low range, let the engine rev high for serious rock-crawler action and wheel control.

We took the Raptor on the Charouleau Gap off-road trail in Tucson, Ariz., which is geared for Jeeps and not necessarily full-size trucks. The Raptor’s stout gearing and generous suspension travel — 13 inches in the front and 13.9 inches in the rear — let the Raptor slowly crawl onto a rock, articulate over and then gently unload the suspension on the other side. We even descended portions of the trail in low range without touching the brakes by engine braking downhill in 1st or 2nd gear. Other trucks would run away if we let off the brakes on the steep downhill portions; the heavy Power Wagon didn’t have the braking power to descend in confidence like the Raptor.

The Raptor’s Terrain Management System takes the guesswork out of picking driving mode and transfer case settings. Normal, Weather, Mud and Sand, Baja and Rock Crawl modes configure the truck for specific types of driving. In Baja setting, for example, 4-High is selected, the transmission and stability system have unique programming for desert runs and engine responsiveness is specifically tuned. In other modes, the selector will activate both 4-Low and the electronic locking rear differential to escape traction-limited situations at low speeds. There’s also a new automatic four-wheel-drive setting (4A) in addition to 4-High, 4-Low and 2-High that automatically transfers torque between the front and rear wheels on demand.

In Baja mode, the Ford Raptor glides over dirt washboard roads at 70 mph like it’s on freshly paved asphalt. The suspension works frantically to conform to the road surface without sending big movements into the cabin; other Off-Road Challenge competitors didn’t have supple enough tires or shock absorbers and felt like the bed wanted to rattle right off the frame on the same roads. The Raptor’s composure and ability to find traction on loose dirt and sand is remarkable in 4WD with the optional front limited-slip differential. Slapping it in two-wheel drive let the Raptor’s back end slide around our makeshift dirt course feeling more like a 5,800-pound Mustang than a full-size pickup truck.

Ford says the Raptor weighs 500 pounds less than the previous Raptor, but it ain’t no lightweight, as ours tipped the scales at 5,860 pounds with optional equipment. Still, it’s extremely agile and drives like a much lighter truck. The new Raptor has larger-diameter shock absorbers (going from 2.5 to 3 inches) developed with off-road shock manufacturer Fox.

Take the Ford Raptor out of its element and it’s surprisingly not scary to drive on pavement. A long-travel soft suspension with tires like these has the potential to be disconnected from the road, but the steering remains quick, albeit light and somewhat floaty, and the truck is perfectly drivable in daily duty. Body lean is noticeable, but the Raptor doesn’t feel uncontrollable.

Braking is where the off-road truck has its biggest compromise. The Raptor doesn’t stop with immediacy, and the brake pedal is soft and unresponsive. Braking distances are long — we recorded a 60-mph-to-zero panic braking distance of 151.1 feet, which is more than 10 feet longer than street-oriented F-150s we’ve tested.

A few interior pieces separate the Raptor from pedestrian Ford F-150s. A contoured steering wheel has a red stripe at the 12 o’clock position for peripheral steering reference, and manual gear changes are handled through magnesium shift paddles mounted to the wheel. The steering wheel has a confident grip and the paddle shifters are easily accessible for quick trail use. Front seats are bolstered for tighter grip, though they’re not a sport seat that will alienate customers like the Mustang’s optional Recaros do.

The SuperCab doesn’t have a very roomy or usable backseat compared with crew-cab trucks, but I think it’s a fair compromise for the more attractive body style (your opinion may vary). The Ford F-150 Raptor is an off-road sports truck anyway, so like a Porsche 911 or Nissan GT-R, who cares about backseat comfort? If you do, the SuperCrew is available and quite roomy.

Like other F-150s, the Raptor’s optional Sync 3 puts it above and beyond other multimedia system offerings. Apple CarPlay and Android Auto simplify phone use by mirroring navigation, calls and text messages on the main media touchscreen. Sync 3 has robust application integration with an easy-to-use interface for Spotify and Pandora internet radio, Glympse and more.

Between the speedometer and tachometer gauges is an 8-inch information display with off-road info showing pitch, steering angle, power distribution and terrain mode.

Unlike the Toyota Tundra TRD Pro, Ford hasn’t limited feature availability on its off-road trim, so all the great class-leading technology of the regular F-150 is available on the Raptor, which helps with everyday ownership. Pro Trailer Backup Assist is available for those who tow with the Raptor, and there’s remote start, LED headlights and a seemingly endless number of charge receptacles: USB, AC and DC — and that’s just the front seats.

The Raptor’s ratings are knocked down to mid-size territory, with the tested SuperCab having a maximum trailer weight rating of 6,000 pounds and the SuperCrew at 8,000 pounds. The calculated payload of our SuperCab was 740 pounds, which is enough for a recreational off-road all-terrain vehicle, but that will also be sapped by any additional cargo or occupants.

The Ford F-150 Raptor has one cargo box length: 5 feet 5 inches. Our test truck had the optional spray-in bedliner and stowable load ramps. The ramps are a nice feature if any wheeled vehicle will be carried, like a pair of dirt bikes or an ATV. When not in use, the ramps fold up to the side of the carbo box above the wheel tubs and don’t take up too much space. The cargo box also illuminates nicely with optional LED lighting. Like other F-150s, the Raptor has a huge center console with plenty of storage for big items such as a tablet or laptop, and nooks and crannies for phones and other pocket items.

The F-150’s top crashworthiness ratings from the Insurance Institute for Highway Safety also apply to the Raptor, according to an IIHS representative. Available safety features include a 360-degree camera system, blind spot warning, lane departure prevention, automatic high beams and a forward collision warning system that pre-charges the brakes if a likely collision is detected.

It’s hard to valuate a truck that’s so unique. There’s honestly nothing out there that combines the Ford Raptor’s acceleration and extreme off-road confidence from the factory. As tested, our SuperCab at $64,845 had desirable features of the F-150 such as Pro Trailer Backup Assist, 360-degree parking camera, lane keep assist and more, plus the kind of off-road prowess at the levels of a specialty model like the GT350 Mustang. Ram’s Power Wagon is similarly all-terrain capable with a standard winch and front and rear locking differentials, but it’s not menacingly fun to drive like the Raptor.