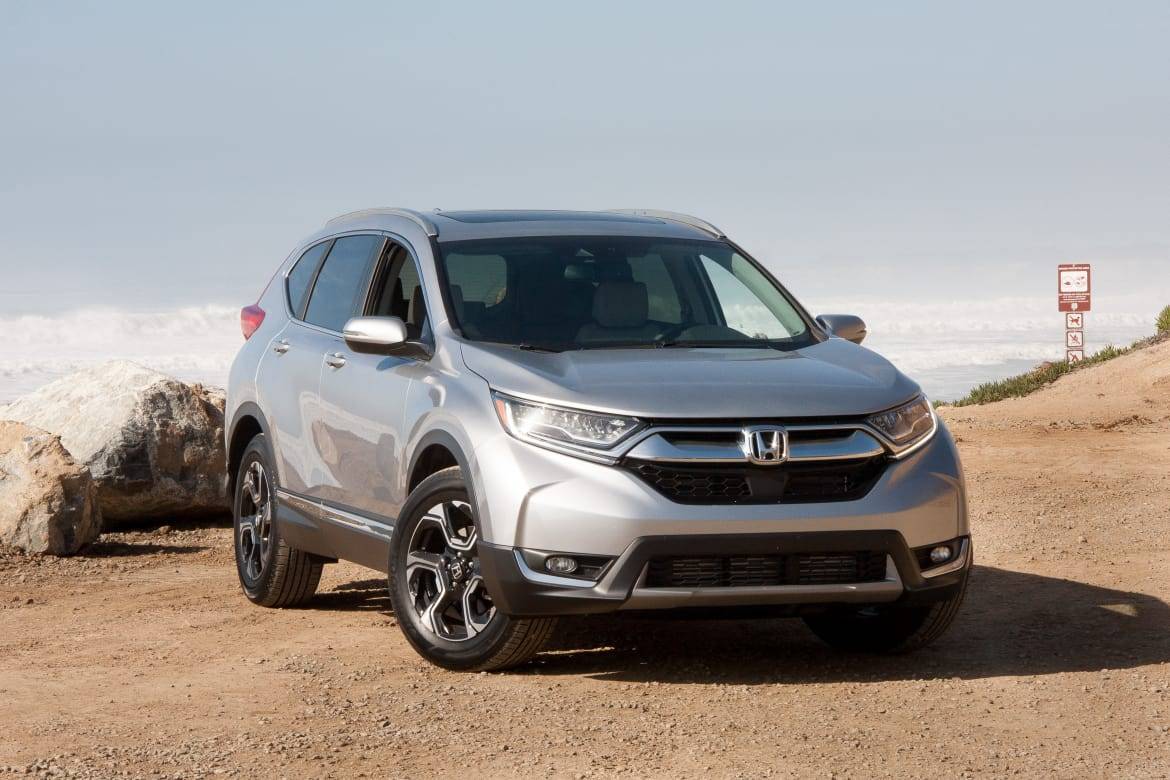 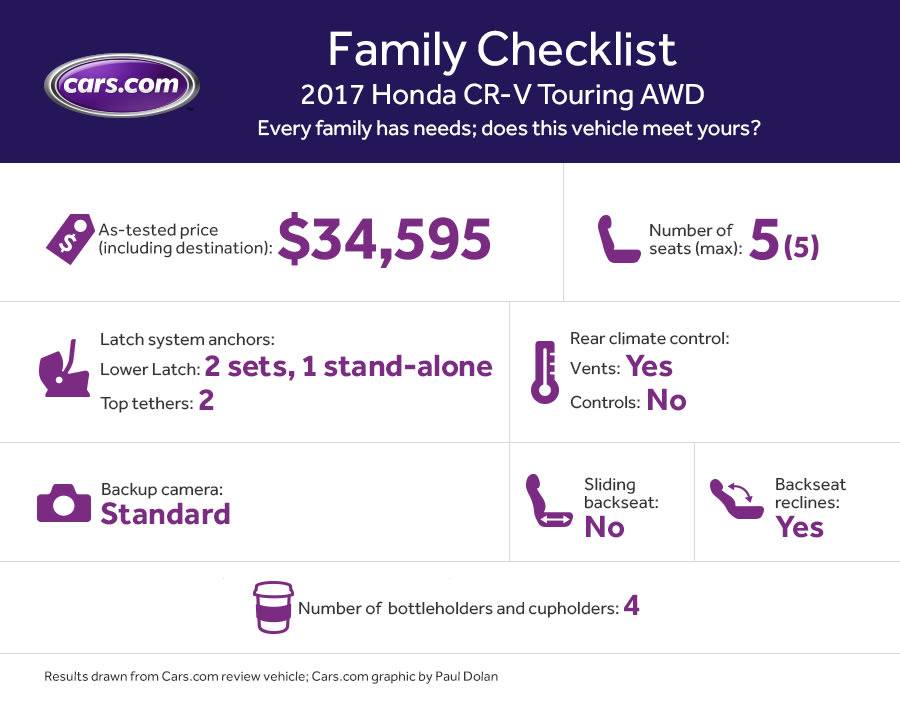 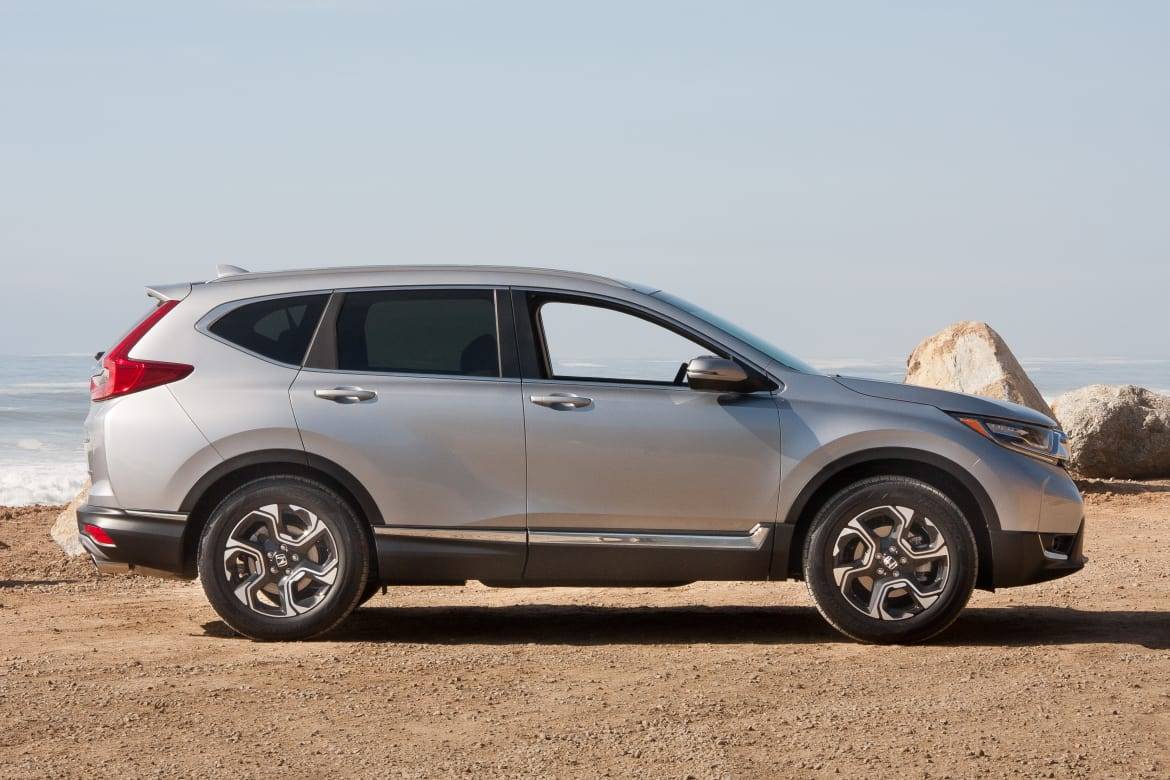 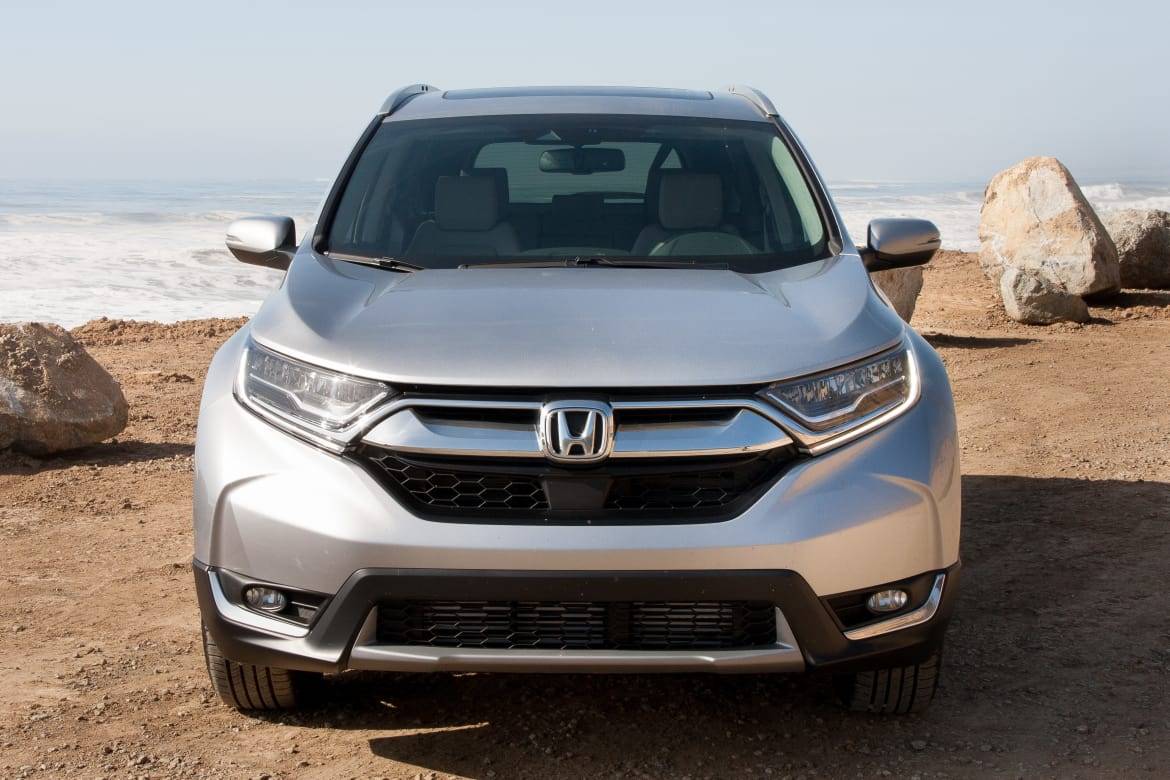 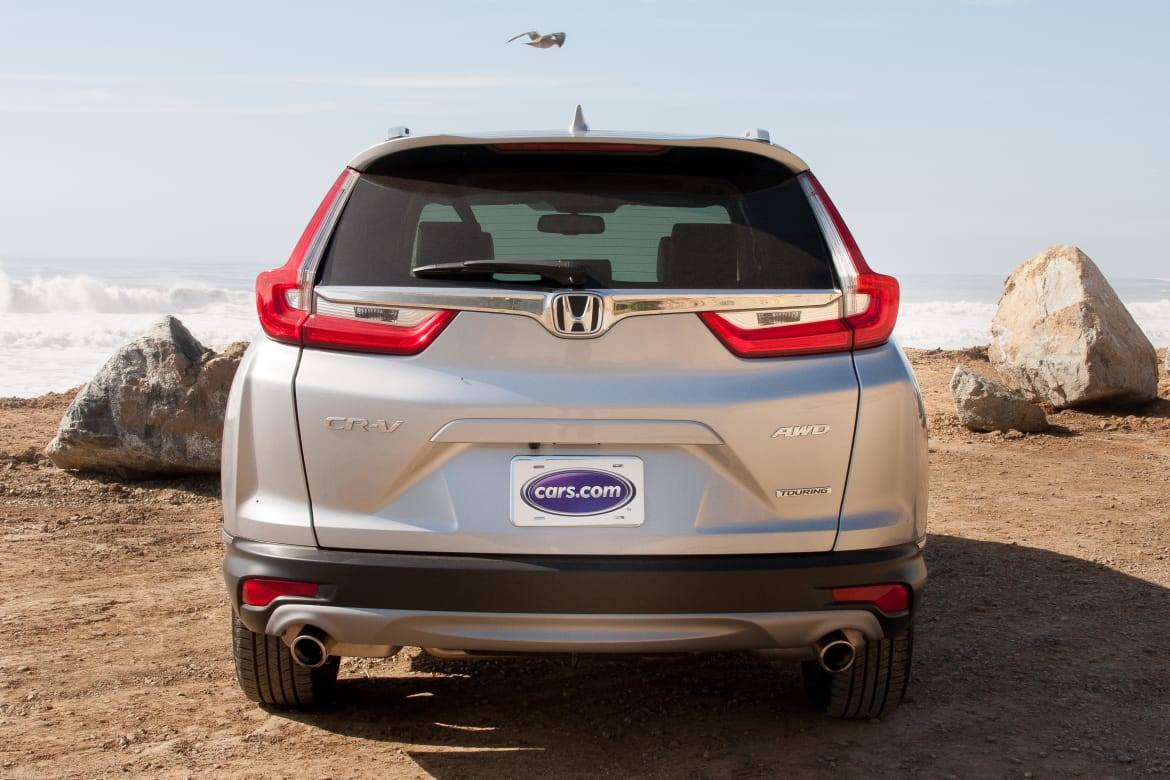 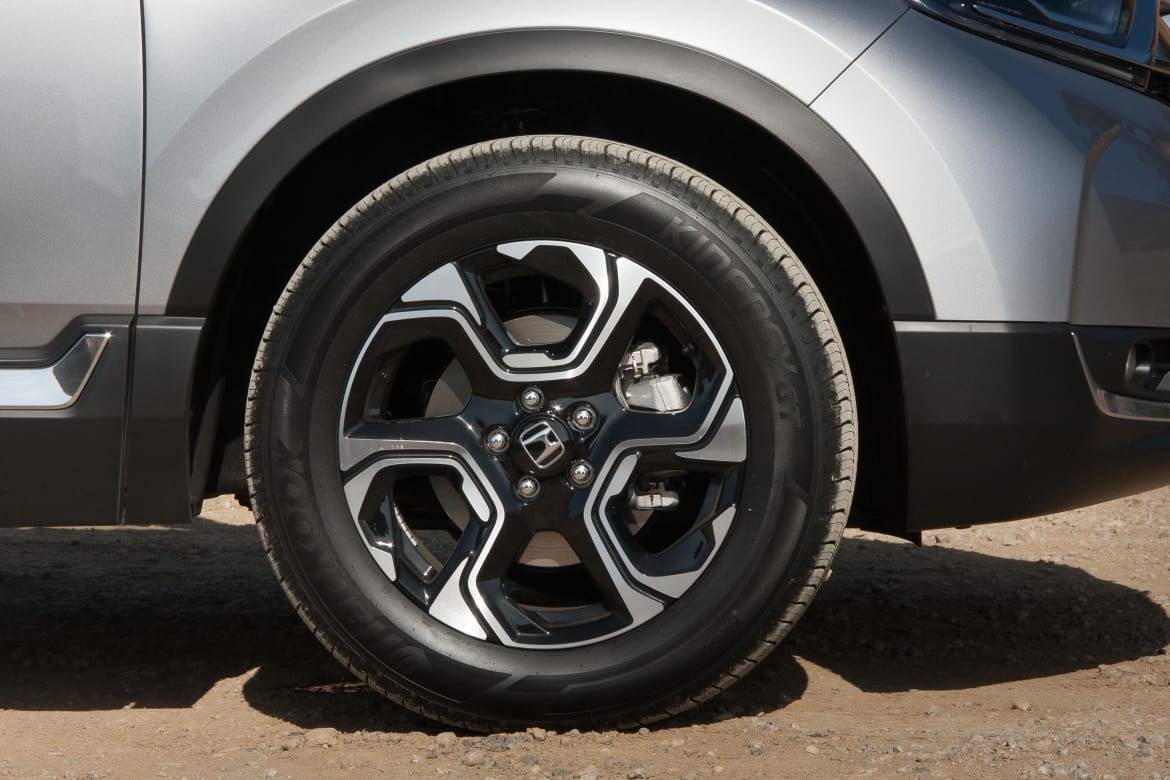 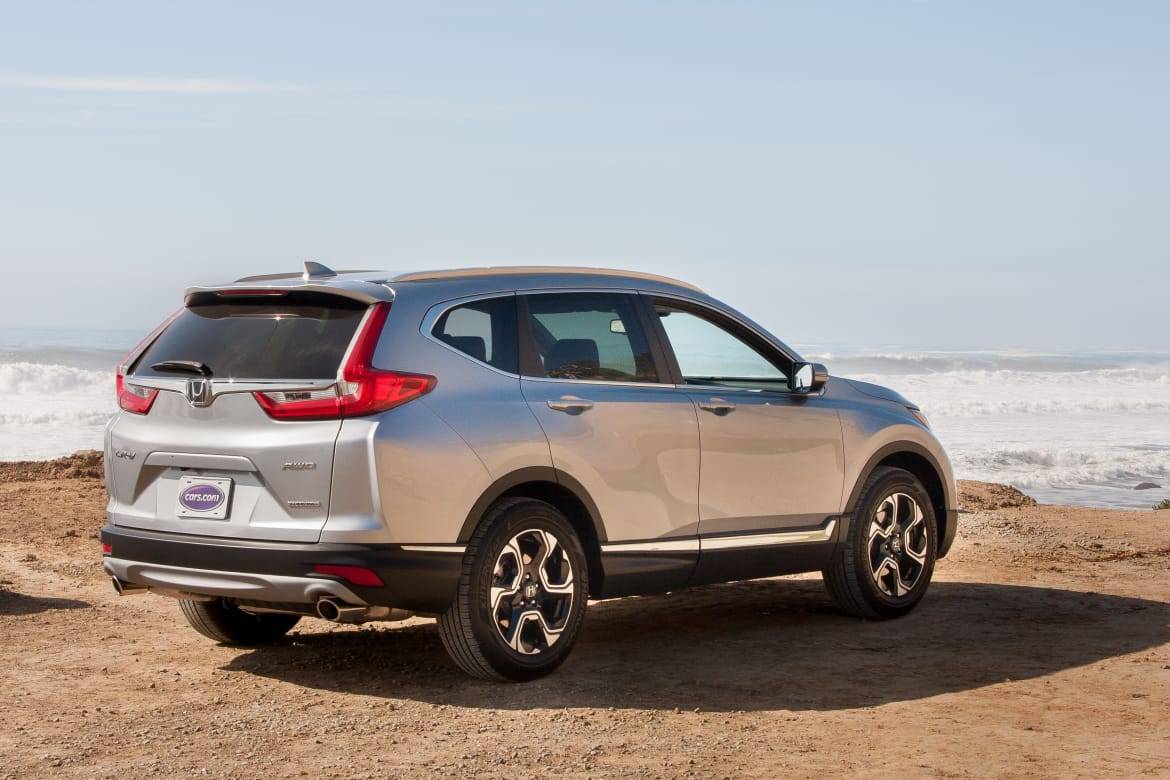 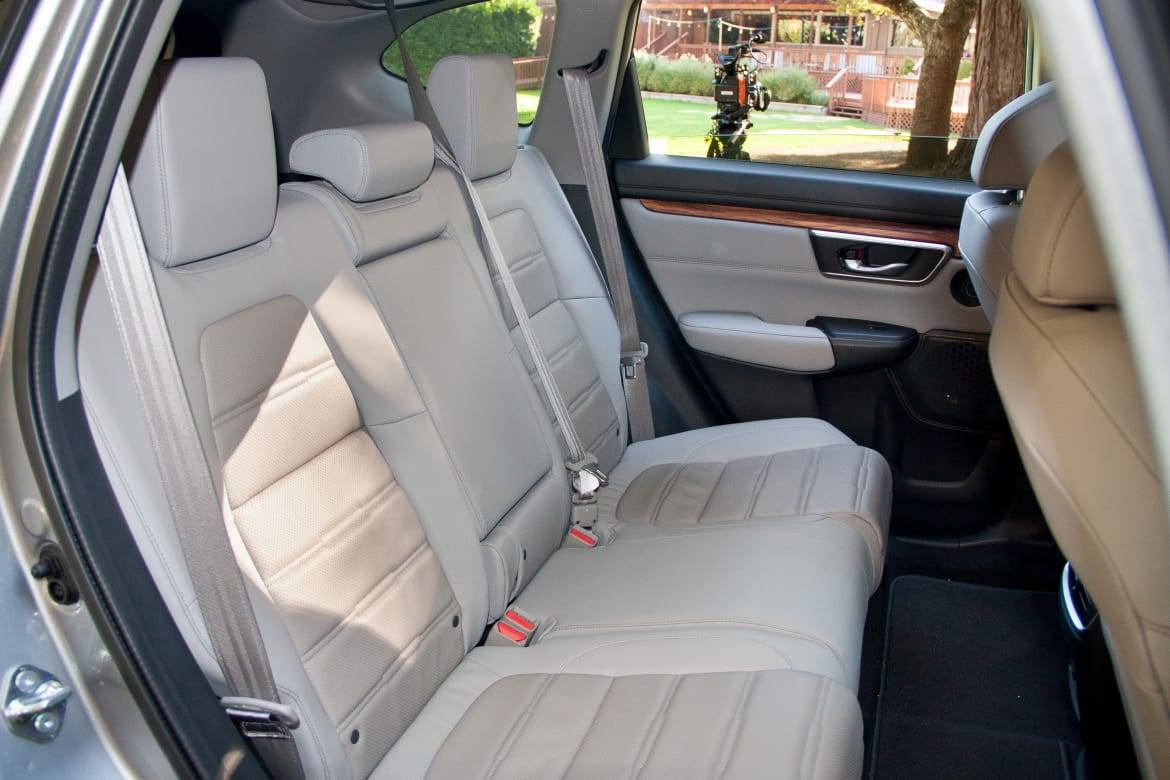 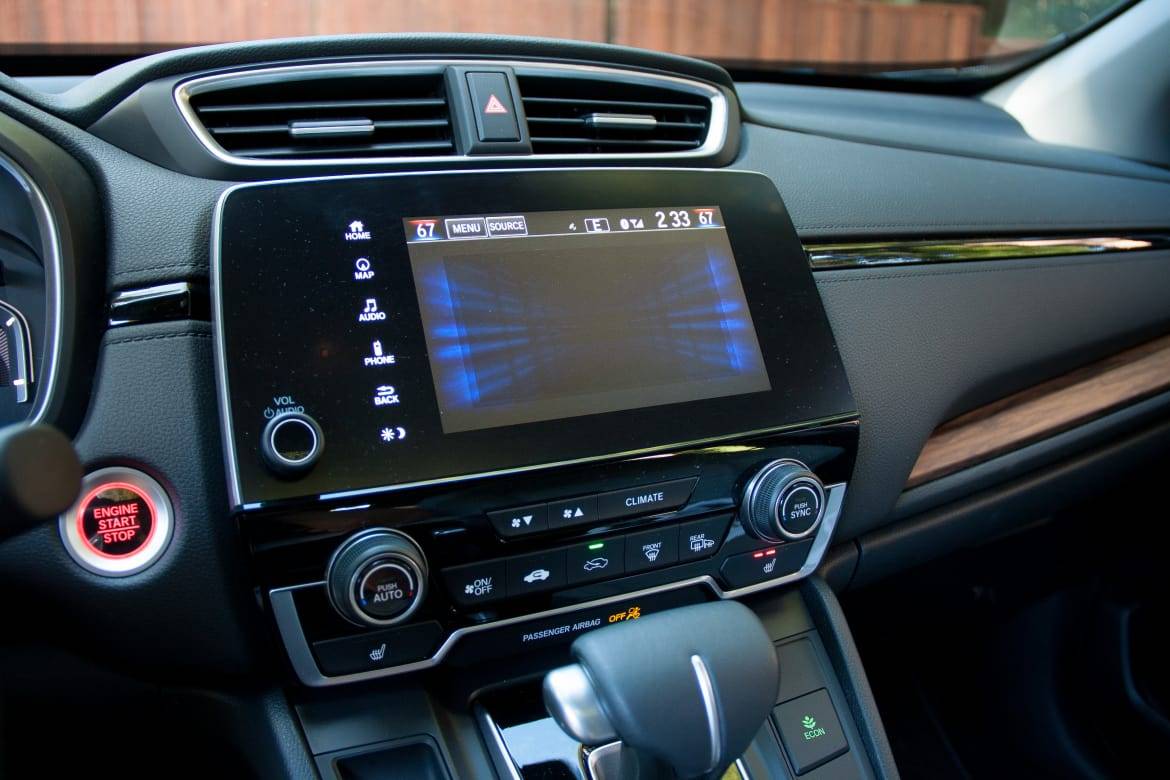 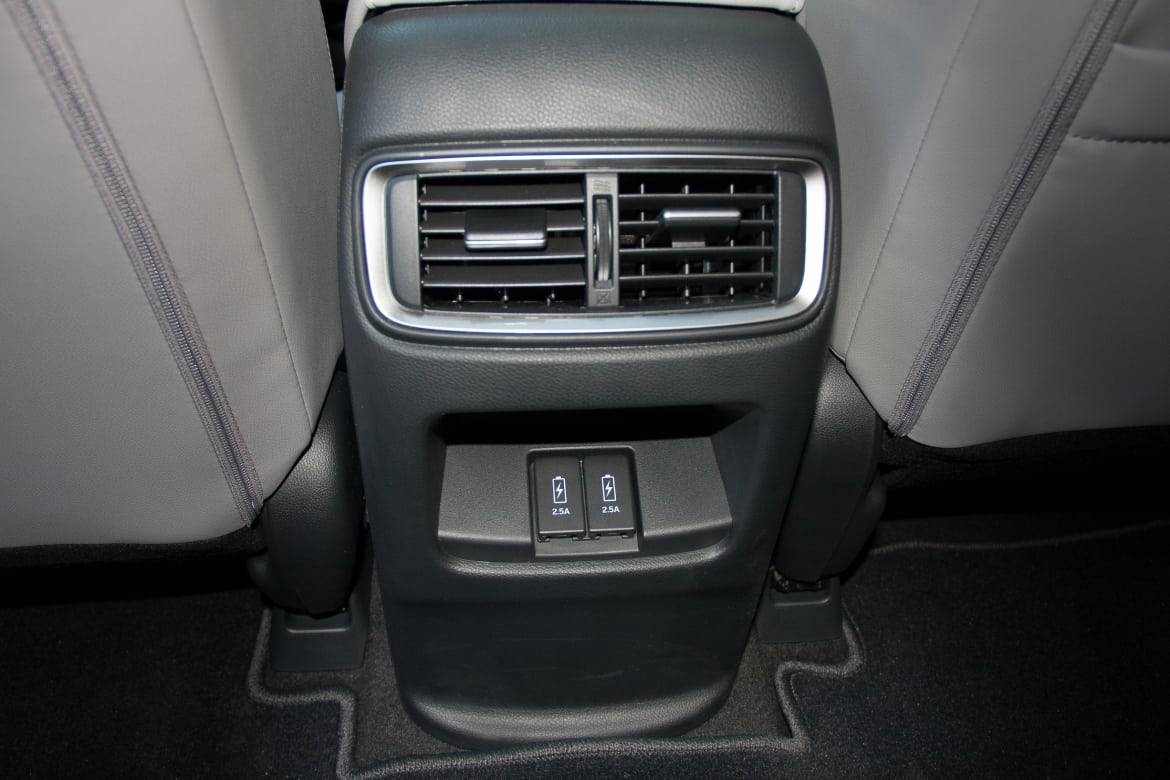 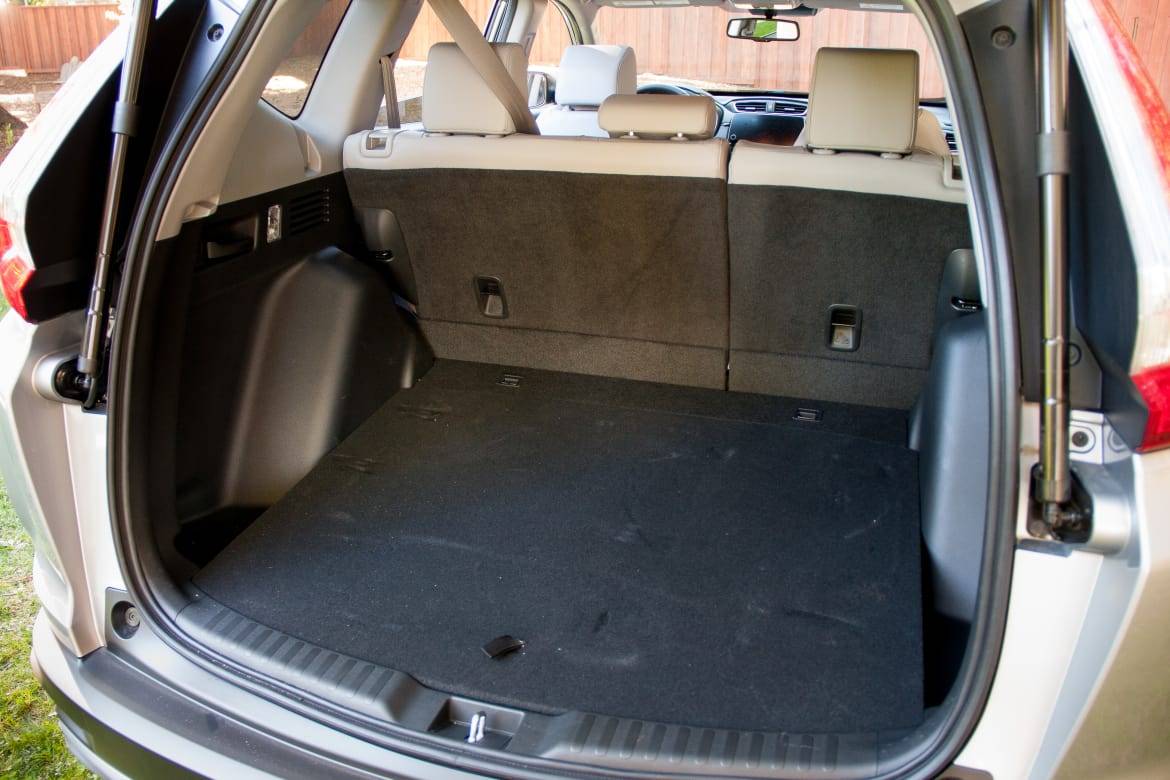 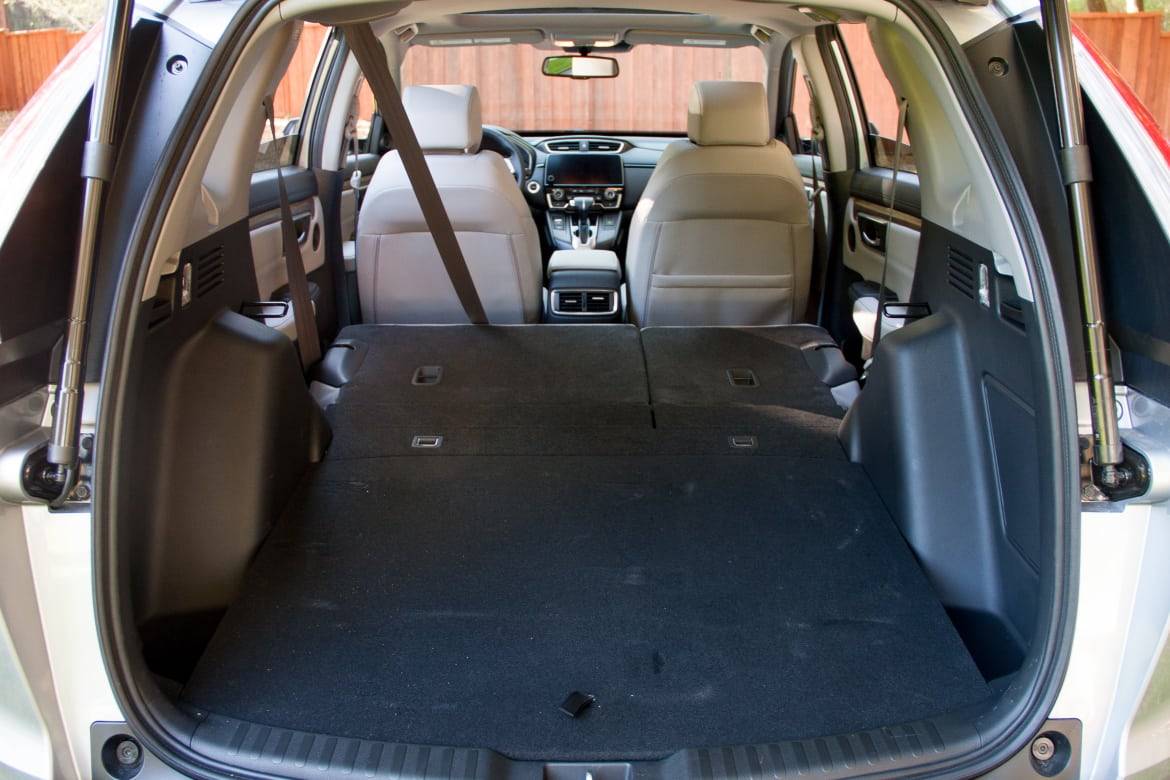 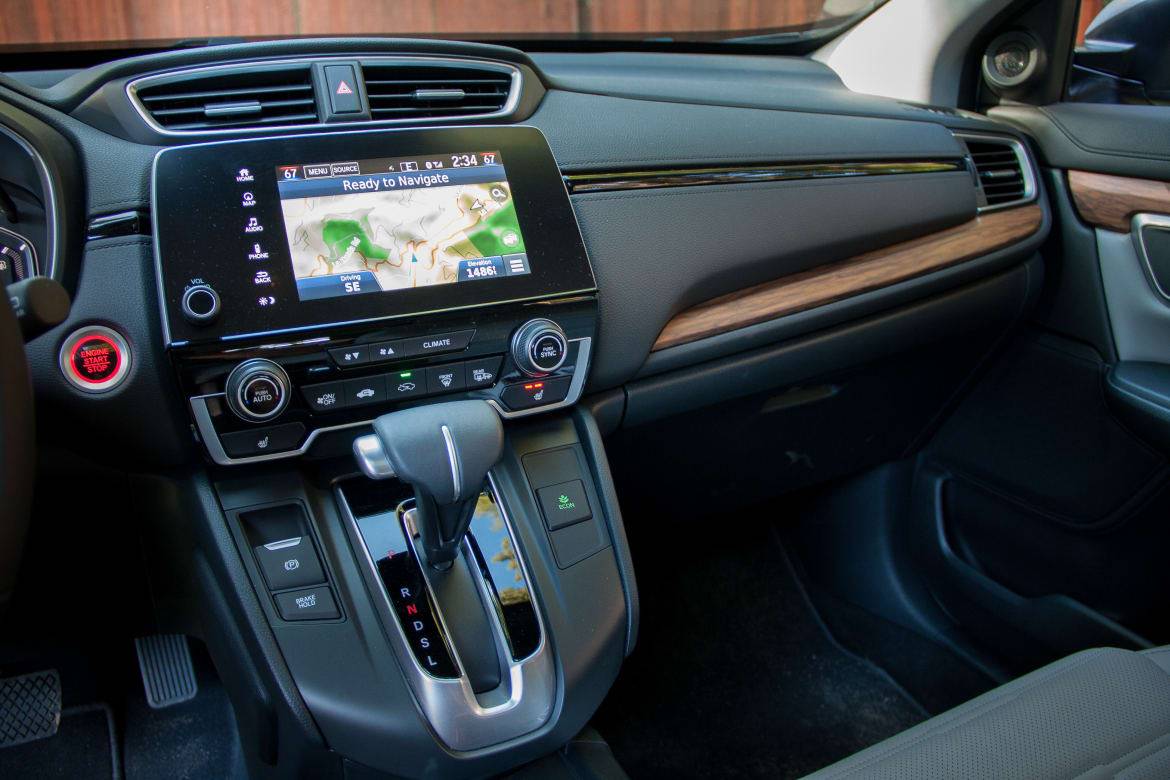 Compact SUVs are constantly playing leapfrog. Models change and add new features to jump ahead of the pack, only to be caught again in a year or two. The Honda CR-V is a prime example of this: The 2015 version won our 2015 Compact SUV Challenge, then just one year later, the 2016 CR-V slipped to third in the same contest. It finished behind the 2017 Kia Sportage and the 2017 Ford Escape, both of which got big updates for the 2017 model year.

But the wheel keeps turning, and now Honda has struck back with a redesigned 2017 CR-V that might put it back on top. The CR-V competes with the two aforementioned models and its eternal rival, the Toyota RAV4. Compare them all here and the 2016 and 2017 Honda CR-Vs here.

There were two big reasons the CR-V slipped to third in our 2016 Challenge: how it drove and our editors’ continuous battle with its buttonless multimedia system. Honda took those issues on directly in this redesign, with a new engine option and changes to the multimedia system. Updates also include additional safety technology and a more useful cargo area.

The SE trim is gone for 2017, leaving the new Honda CR-V available in four trim levels: LX, EX, EX-L and Touring. I tested an all-wheel-drive Touring to see if the updates are enough to launch the Honda CR-V back to the front of the line.

The CR-V’s brand-new exterior styling makes it look more vertical and angular, but very different from Honda’s larger Pilot SUV and Ridgeline pickup truck. That’s a change for the better in my book.

The 2017 Honda CR-V is bigger than last year’s model in every dimension. The wheelbase has been stretched 1.6 inches, increasing overall cabin size. LED daytime running lights are standard, and LX models have 17-inch alloy wheels. Every other trim gets 18-inch wheels. The Touring adds LED headlights and a hands-free power liftgate that’s operated by waving a foot under the rear bumper. The system doesn’t always work as intended and may leave you dancing a jig behind the CR-V to get it to open; I prefer the proximity-based liftgates found on vehicles like the Kia Sorento and Genesis G90.

Another subtle change may go unnoticed but will definitely be appreciated: The rear side doors open much wider now — almost a full 90 degrees away from the Honda CR-V. It makes everything easier, from loading young children to folding down the seatbacks — even just climbing into the backseat is easier now.

The previous-generation CR-V did not drive well, in multiple respects. Our editors took issue with both its powertrain and its ride quality. The 2017 Honda CR-V includes mechanical changes designed to bring the CR-V’s driving experience up to par with the rest of its class.

For the first time, the Honda CR-V now has two engine options. The base engine, found only in LX models, is the same one from last year’s CR-V: a 184-horsepower, 2.4-liter four-cylinder. The new engine is in the EX and above: a 190-hp, turbocharged 1.5-liter four-cylinder. It’s a modified version of the engine found in the redesigned Civic, but it makes 16 more horsepower and 17 more pounds-feet of torque in the Honda CR-V. The boost in power is needed to offset the nearly 600-pound weight difference between an AWD CR-V Touring and a Civic Touring sedan. A continuously variable automatic transmission is the only transmission available, and all-wheel drive is available with either engine.

Honda didn’t stop with the engine compartment. The CR-V’s steering ratio has been tightened, so it takes fewer rotations to turn the wheels from fully left to fully right. There are also updated suspension parts and larger brakes, and the AWD system has been revised to send more torque to the rear wheels when it detects slippage.

These changes were successful on a few fronts and less impactful on others. The updated engine  marginally improves acceleration and passing, but not enough to make the Honda CR-V feel more alive. Getting up to speed feels ponderous from both low speeds and from a standstill, and when you need to accelerate to pass on the highway, the transmission hesitates to find the power.

Other changes to the CR-V were more effective. The steering is improved, and its added responsiveness makes the compact SUV more agile — especially on the highway, where the steering’s vagueness is lessened. The updated suspension also makes the Honda CR-V more comfortable and less busy over broken pavement.

Even with these improvements, though, the new CR-V still doesn’t drive as well as a few of its competitors, namely the Sportage and the Mazda CX-5, which set the “fun-to-drive” bar in this segment.

Honda added standard active grille shutters that help improve fuel economy. EPA-estimated mileage for the base engine is 26/32/28 mpg city/highway/combined with front-wheel drive and 25/31/27 mpg with AWD. The more powerful turbocharged engine gets better marks: 28/34/30 mpg with FWD and 27/33/29 mpg with AWD. Both engines use regular gas.

One of the Honda CR-V’s calling cards has always been its smartly packaged interior, and the 2017 model takes that to the next level. Though the driving updates were underwhelming to me, the additions inside, from the front seats to the cargo area, make up for it.

Overall interior room is great. The biggest gains are found in the rear seat, where the stretched wheelbase means there are now 2.1 additional inches of rear legroom. I was also happy to find that even though my test model had AWD, there was no hump in the floor back there, which helps when trying to fit three folks in the backseat.

To top it all off, active noise cancellation is now standard for 2017, and the interior is quiet even at highway speeds.

LX models have a more rudimentary media system with a 5-inch screen, but EX models and higher feature a 7-inch screen and Honda’s Display Audio system, which has been much maligned by our editors. There is, however, a big addition for 2017 that isn’t even electronic: a volume knob.

Turns out, a volume knob is one of those things you really miss when it’s gone, and having it back feels great. This is a step in the right direction, but Honda should continue to walk that way and add another knob for tuning.

At least the multimedia system comes with standard Android Auto and Apple CarPlay functionality, which mitigates some of its other faults given smartphone users can swap in those interfaces if they like.

Families will also appreciate the 2017 Honda CR-V’s many charging points. There are two standard 12-volt power outlets up front, and LX models have one USB port. On the EX and higher, there’s an additional USB port for charging only in the front storage area, but the bigger addition in those models is a pair of 2.5-amp USB ports mounted below the vents on the center console. They’re powerful enough to charge tablets and hungrier smartphones — another family-friendly touch.

The center console has been updated and provides even more useful space, with a rubberized, L-shaped tray that can be moved around to fit whatever storage needs arise. Remove the tray and the whole area can be filled — just be careful; the tray doubles as a cover, so removing it leaves items exposed.

Rear cargo room has grown slightly from last year’s model, from 37.2 to 39.2 cubic feet. The bigger change is that the 60/40-split folding backseat now folds all the way flat, creating a flat cargo area with 75.8 cubic feet of space. Thanks to the seats folding flat, Honda says there’s also an additional 9.8 inches of length from the liftgate to the front seatbacks for more than 5 feet of flat cargo space. That number is actually closer to 6 feet; I set the front seats in my normal driving position (I’m 5 feet 11 inches) and got in the back. I could lie down in the space and close the liftgate. The rear cargo area also has a two-step floor, which can be raised or lowered a few inches to fit taller objects when needed.

There is one caveat to the moveable cargo floor, however: The two-step floor can only support 220 pounds in either position, which is something owners will have to watch out for when transporting heavier items.

As of this writing, the 2017 CR-V had not been crash-tested by the Insurance Institute for Highway Safety. Once it’s rated, it will replace the 2016 results in the institute’s Small SUVs category.

Honda rolls most of its top-of-the-line driver-aid technology into a package called Honda Sensing. The package includes forward collision warning with automatic emergency braking, lane departure warning with lane keep assist, adaptive cruise control (with a new low-speed follow function) and road departure mitigation. Road departure mitigation uses a forward-facing camera that can tell the difference between solid or dashed lines. When the system thinks the CR-V may be headed off the road, it can use the steering and brakes to help keep the vehicle on the road.

For 2017, Honda Sensing is standard on EX and higher trims. Last year, these features came only on the Touring, and having them on more of the lineup offers much better value.

In addition to Honda Sensing, EX and above trims add even more standard safety technology, including blind spot warning with rear cross-traffic alert, automatic high beams and a driver attention monitor. The only bad news is that none of these technologies are available on the LX.

Although the base CR-V starts at a slightly higher price than base trims of the Escape and Sportage (but less than the RAV4), things look better for the Honda when you move up one trim level. The EX will be the most popular trim of the CR-V and it’s also the one I find most interesting from a value perspective. It added a lot of standard equipment for 2017 and each EX comes with  the Honda Sensing safety features, the Display Audio system, USB ports and heated front seats.

To build a comparable member of the competition that matches the EX on safety technology isn’t possible. Many of the new CR-V’s safety features aren’t available on the Escape until you reach the top trim level, Titanium, where they’re part of an option package that pushes the price to $32,585. The same is true for the Sportage; its EX trim needs two option packages to get that level of safety equipment, bringing the cost to $31,790.

Only the Toyota RAV4 comes close to the Honda CR-V, offering many of the same safety features standard on all trim levels. The RAV4’s base trim, the LE, comes with Toyota Safety Sense P (which includes the same technology as Honda Sensing minus the road departure mitigation, plus pedestrian detection) and starts at $25,850. That being said, however, the current RAV4 lags behind the CR-V in pretty much every other category. I’d pay the premium and jump up to the CR-V if it were just those two on my short list.

Its long list of changes and updates make the redesigned 2017 Honda CR-V the most well-rounded compact SUV on sale today. It’s still not the best one to drive, but that’s not the biggest priority for shoppers in this class. What folks are looking for is a vehicle that’s easy to live with, and the CR-V is built to be precisely that. With tons of utility, a well-appointed cabin and charging ports galore, the 2017 CR-V looks to be, once more, the king of the mountain — for now.