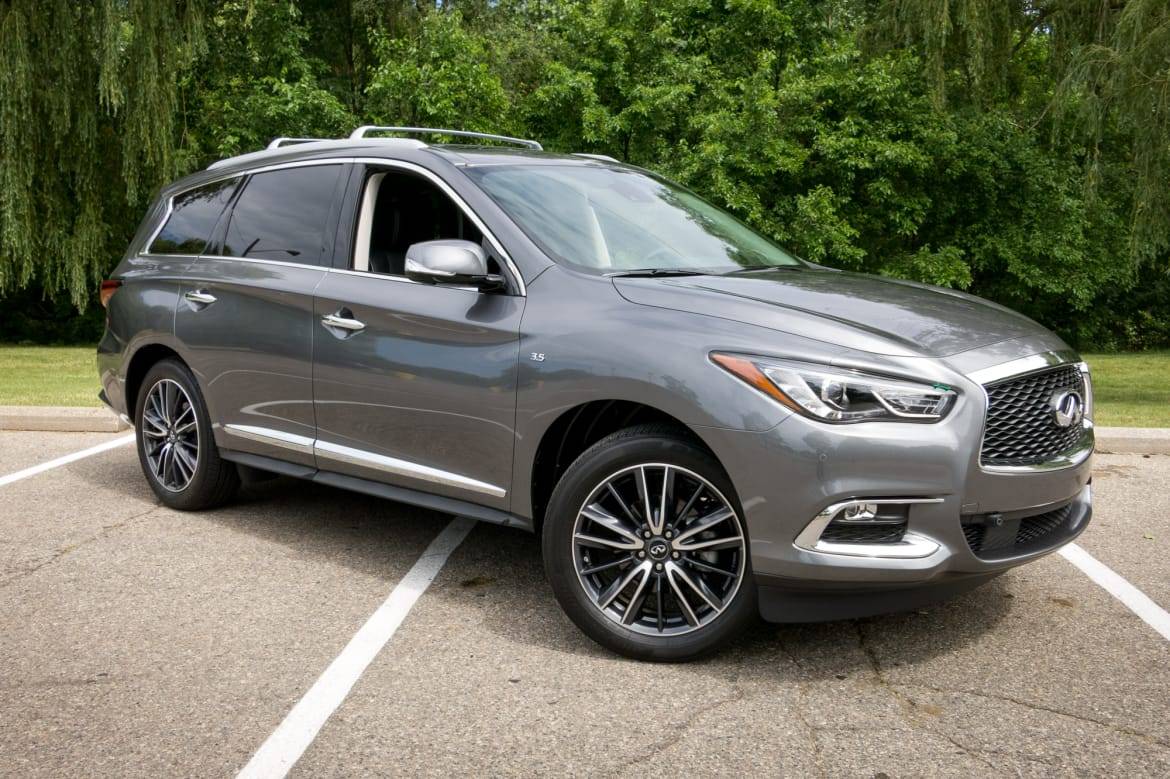 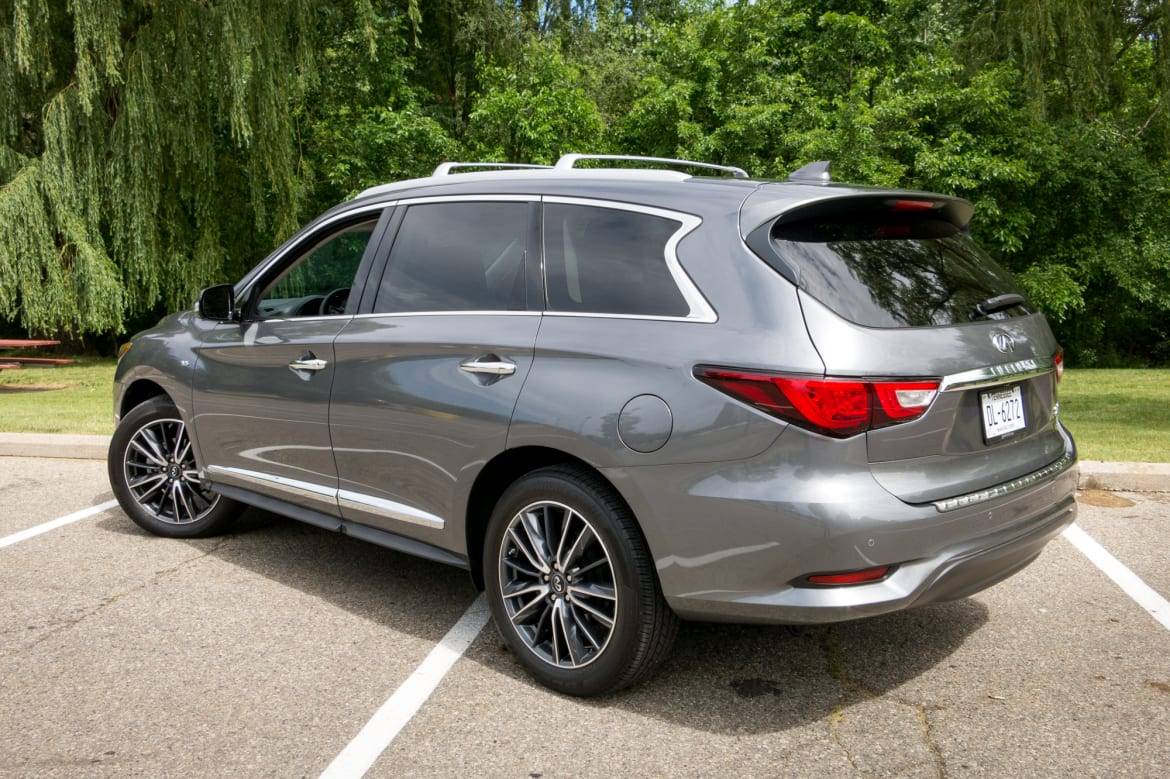 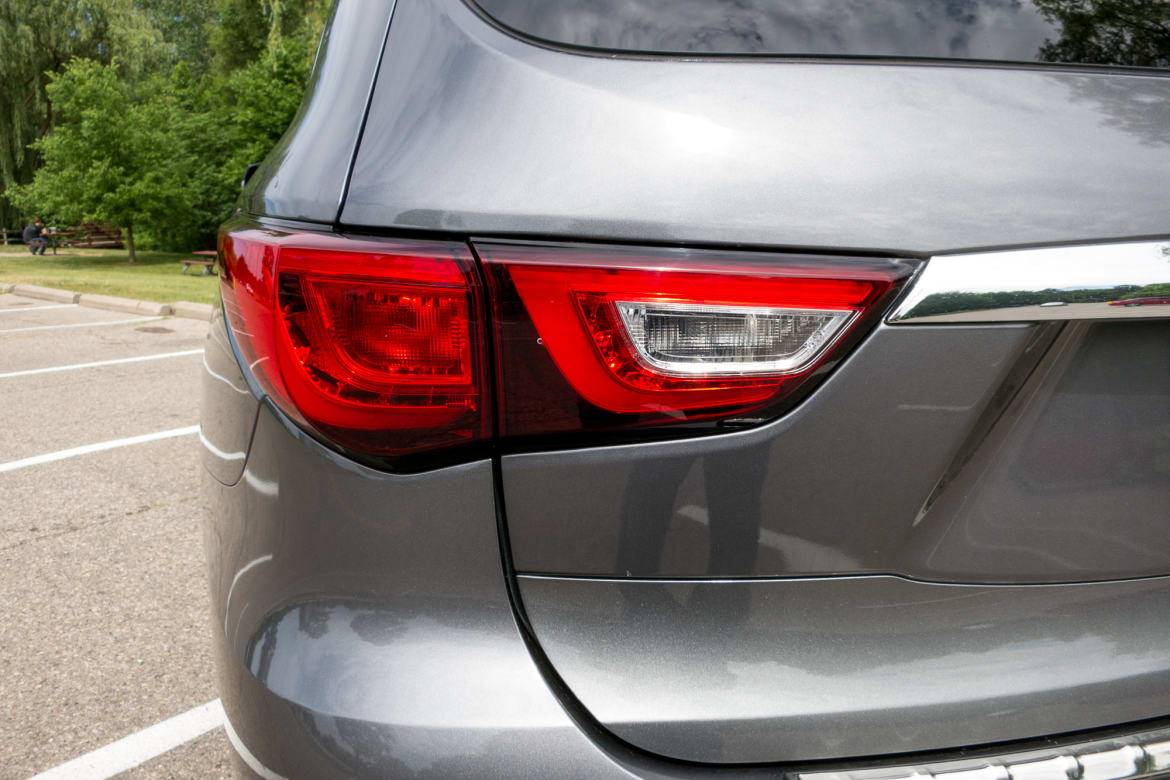 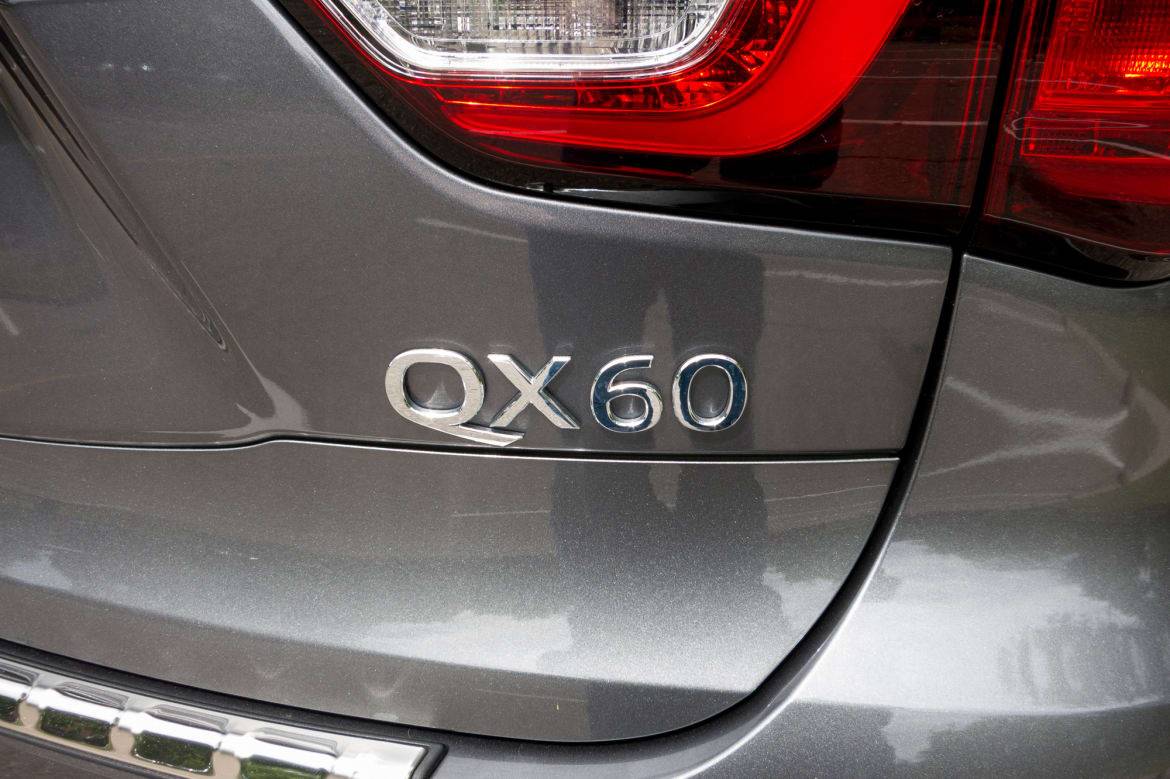 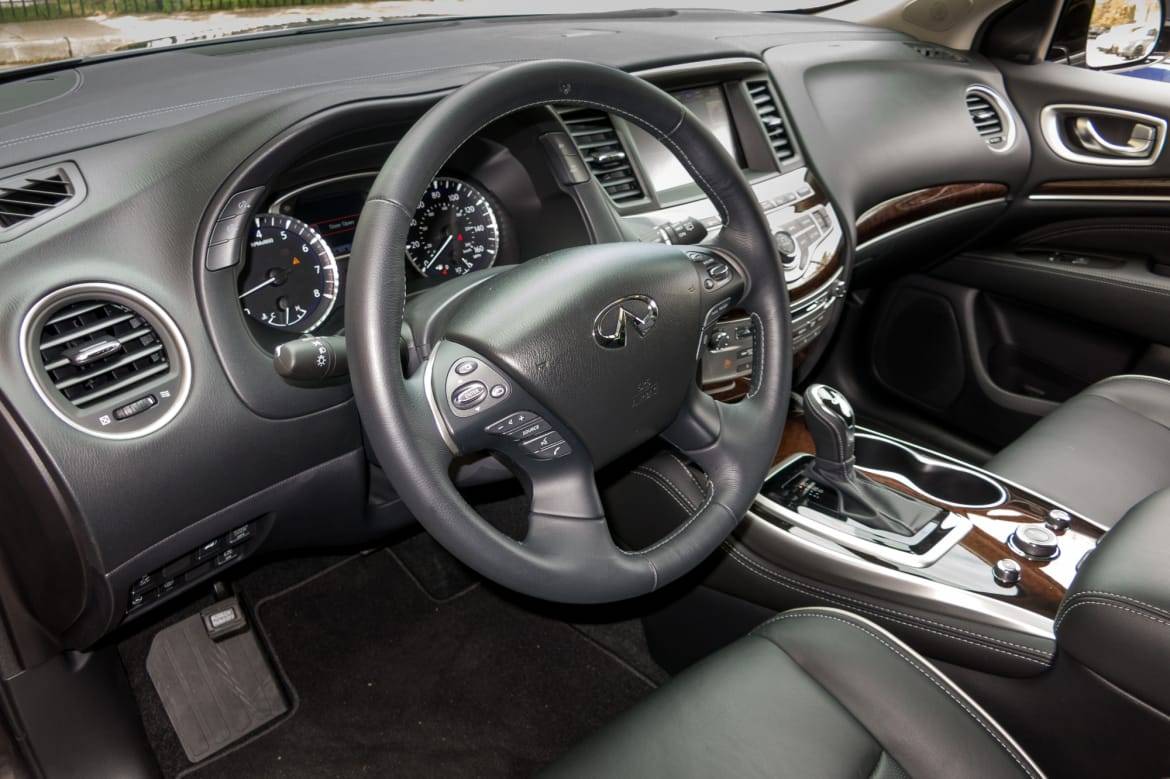 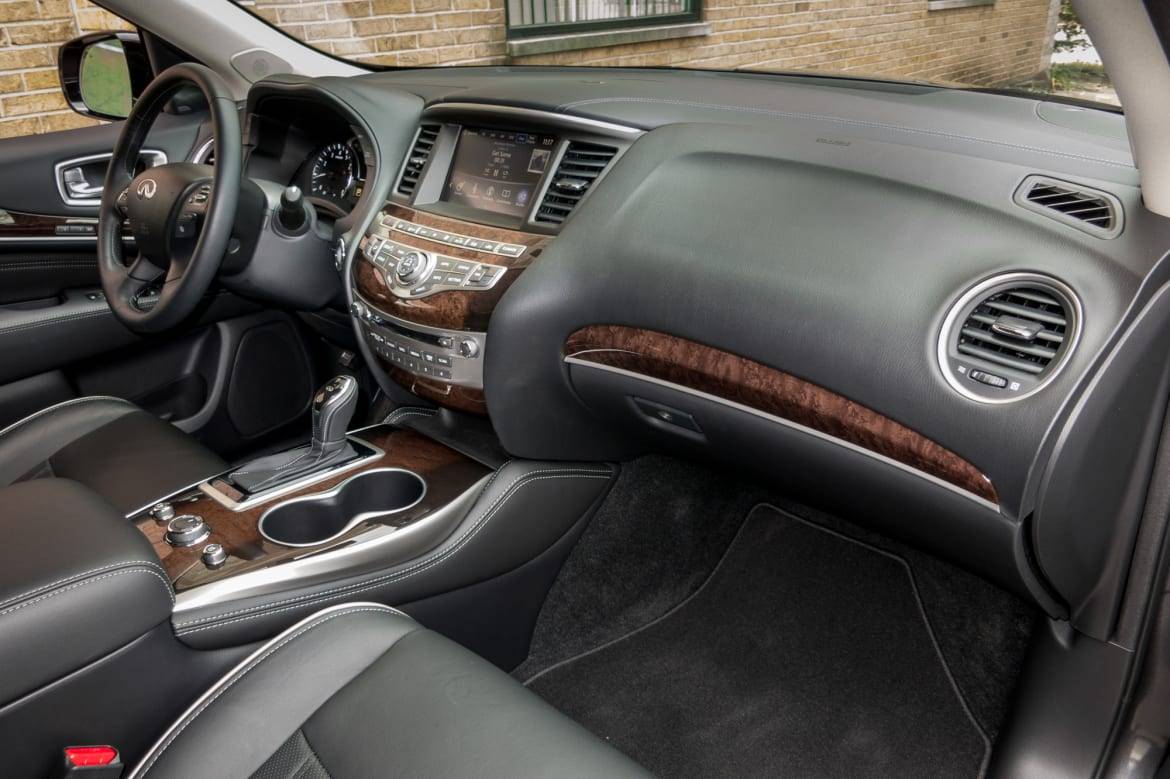 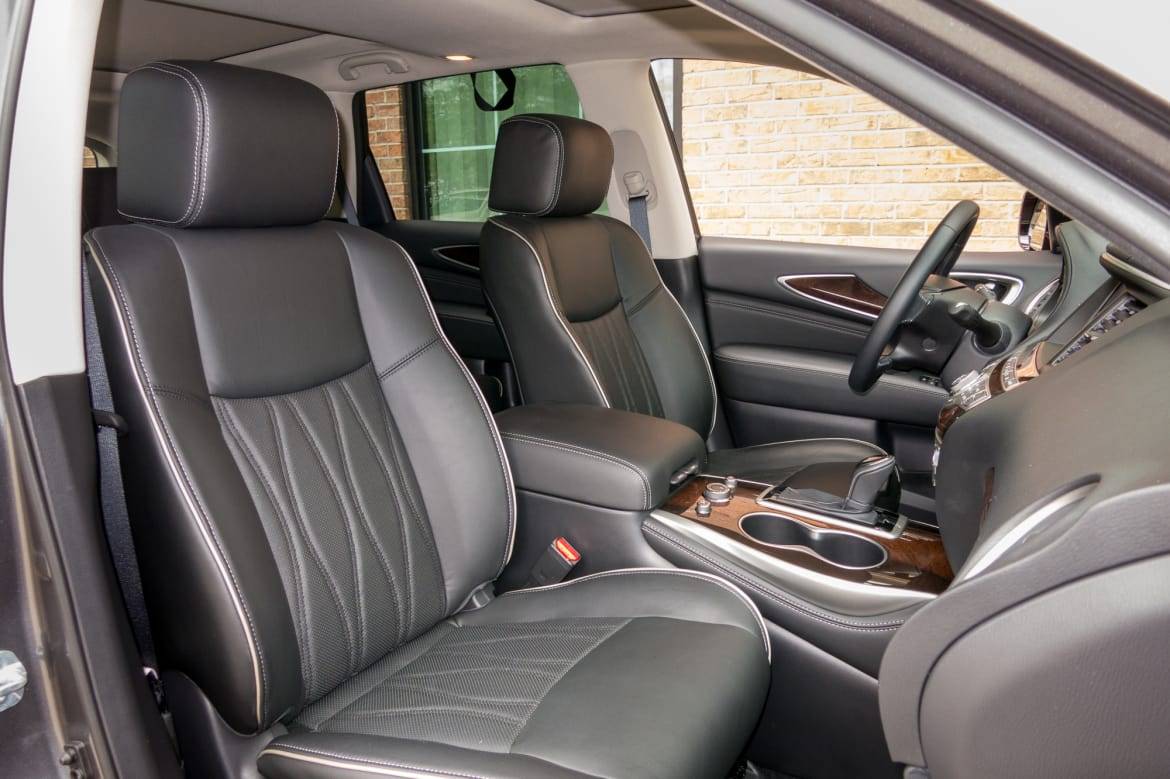 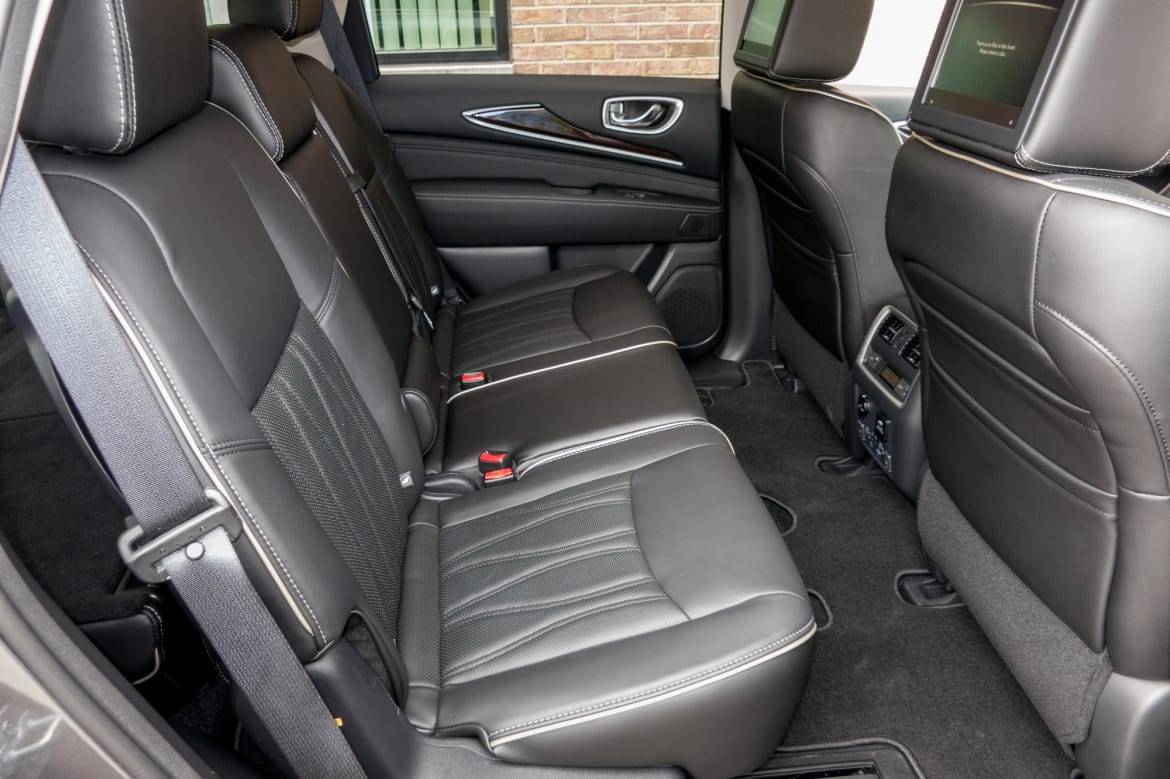 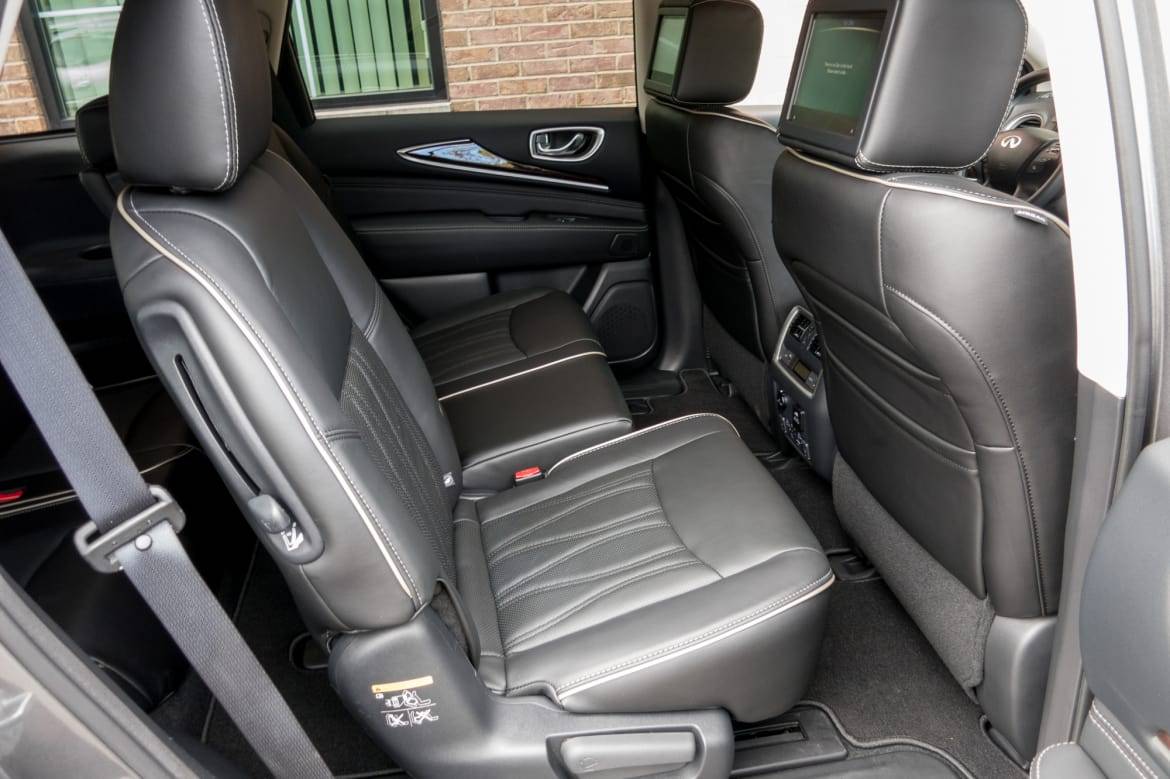 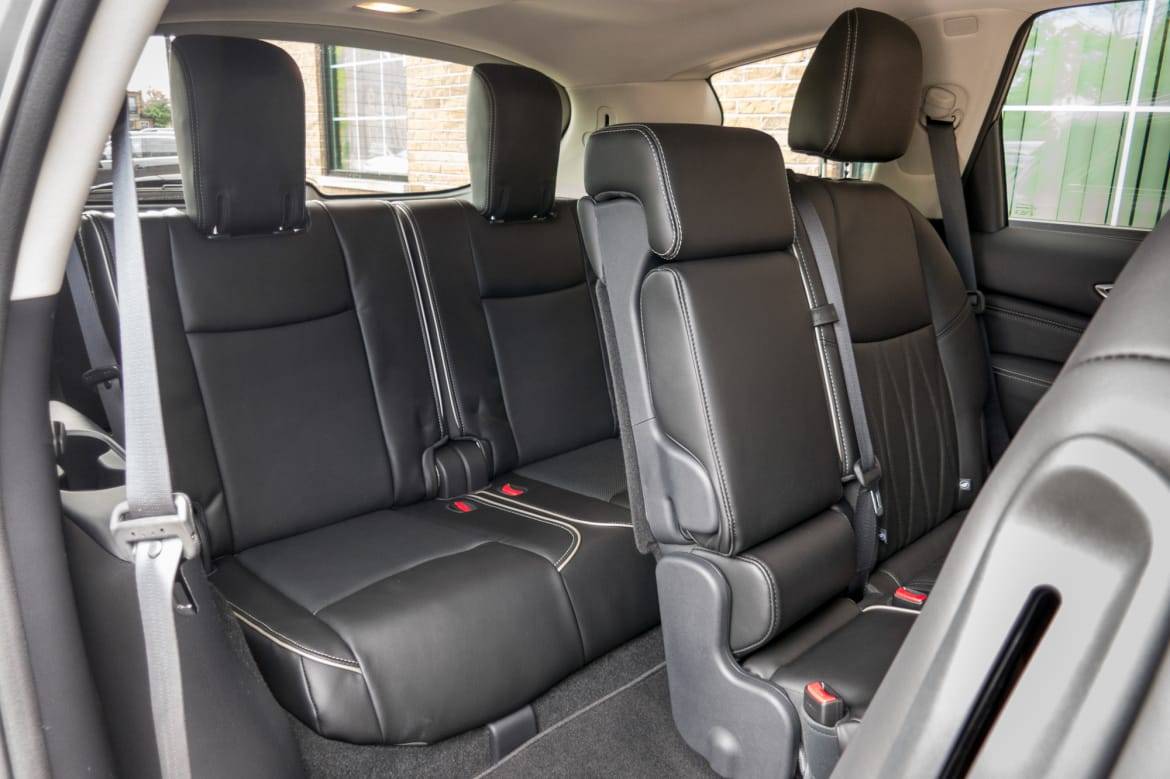 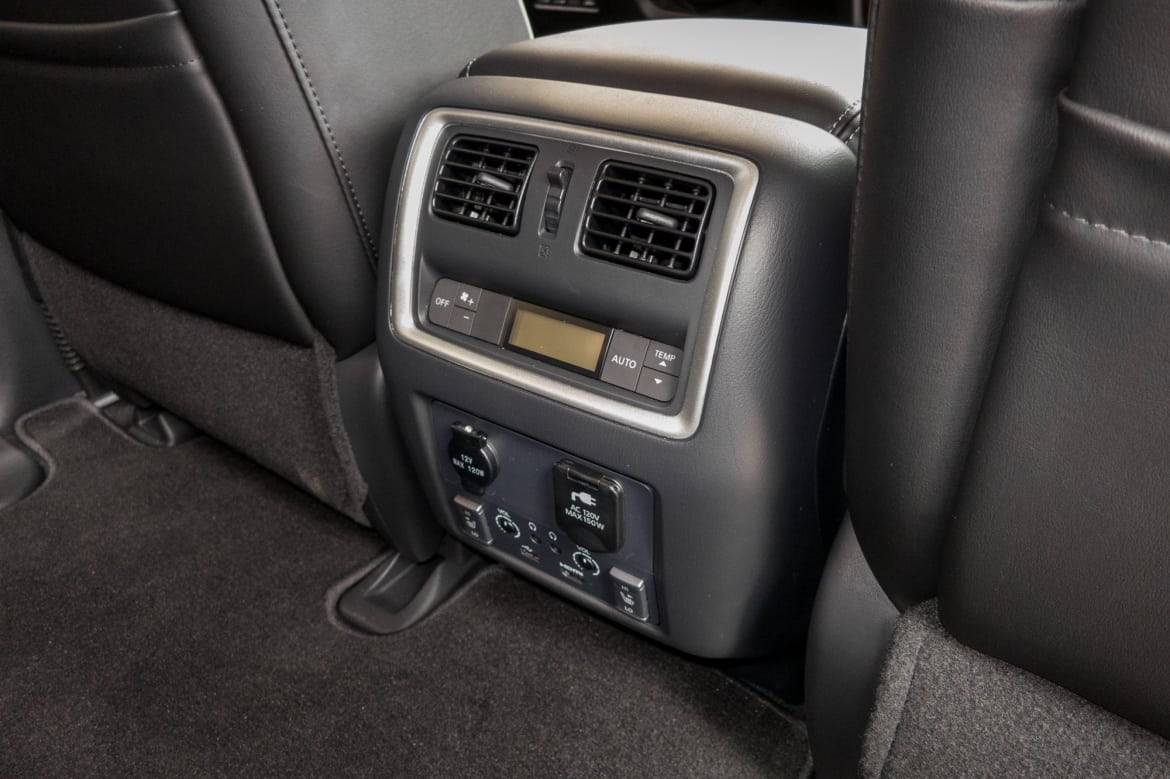 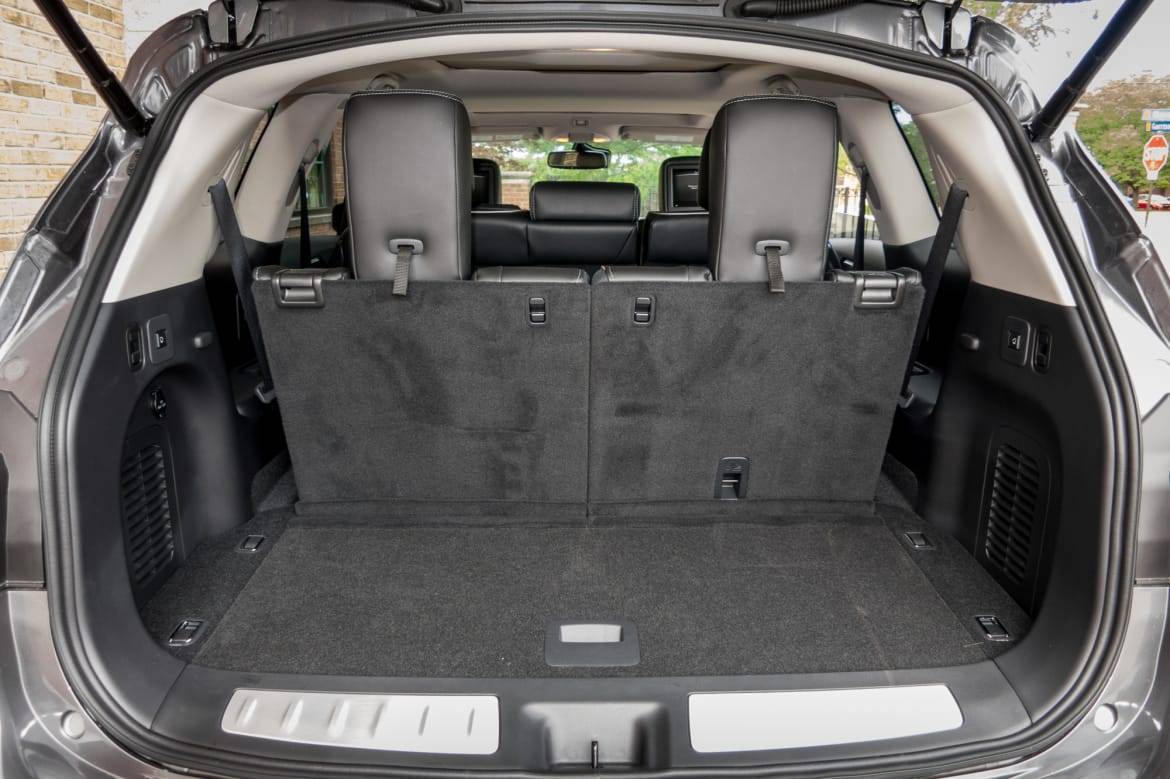 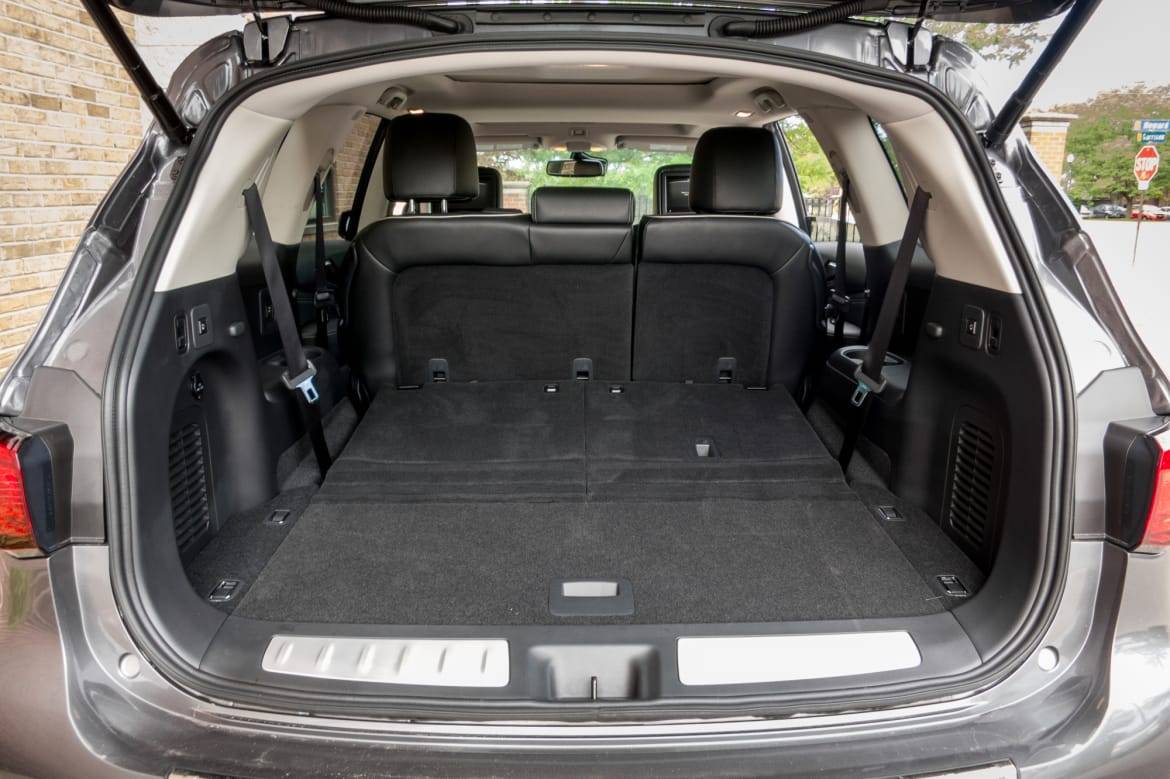 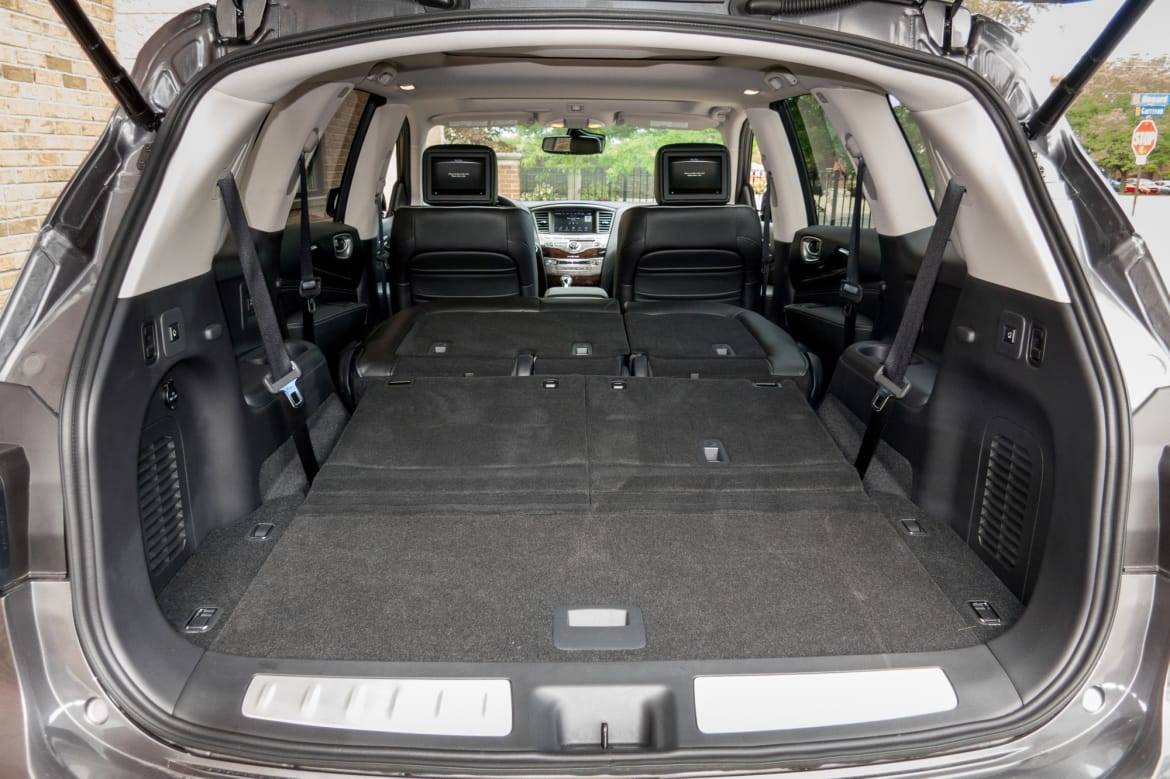 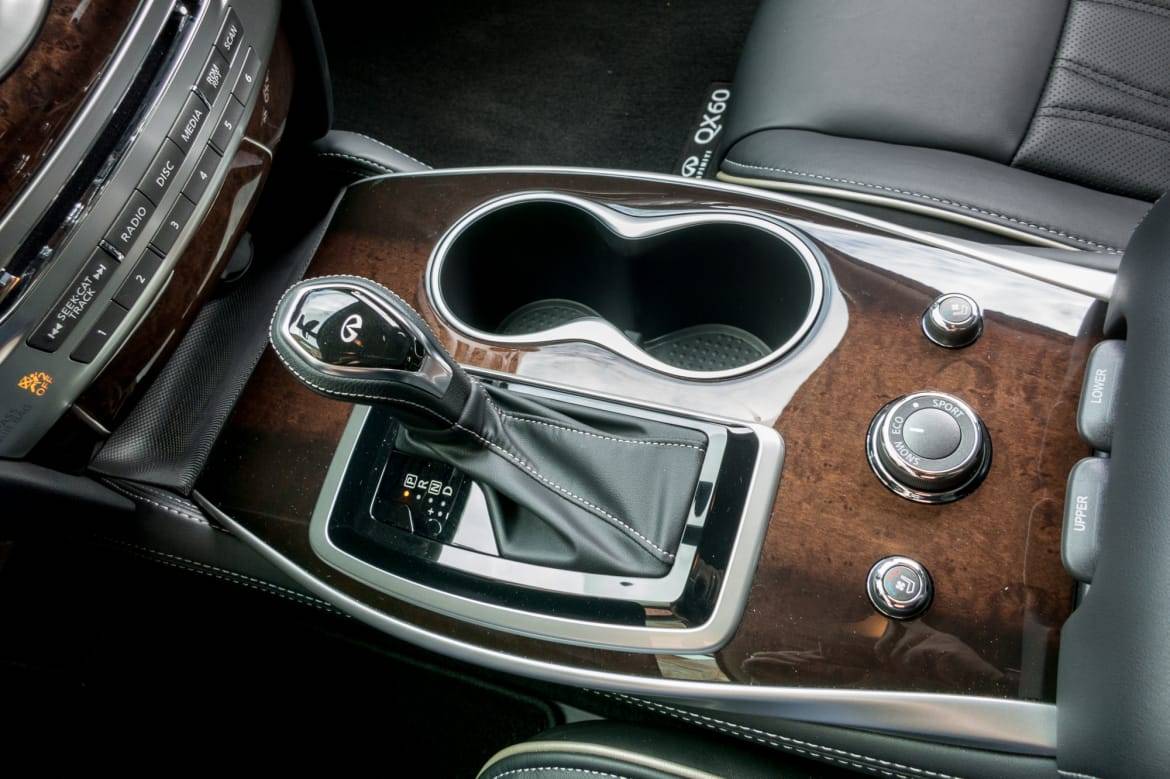 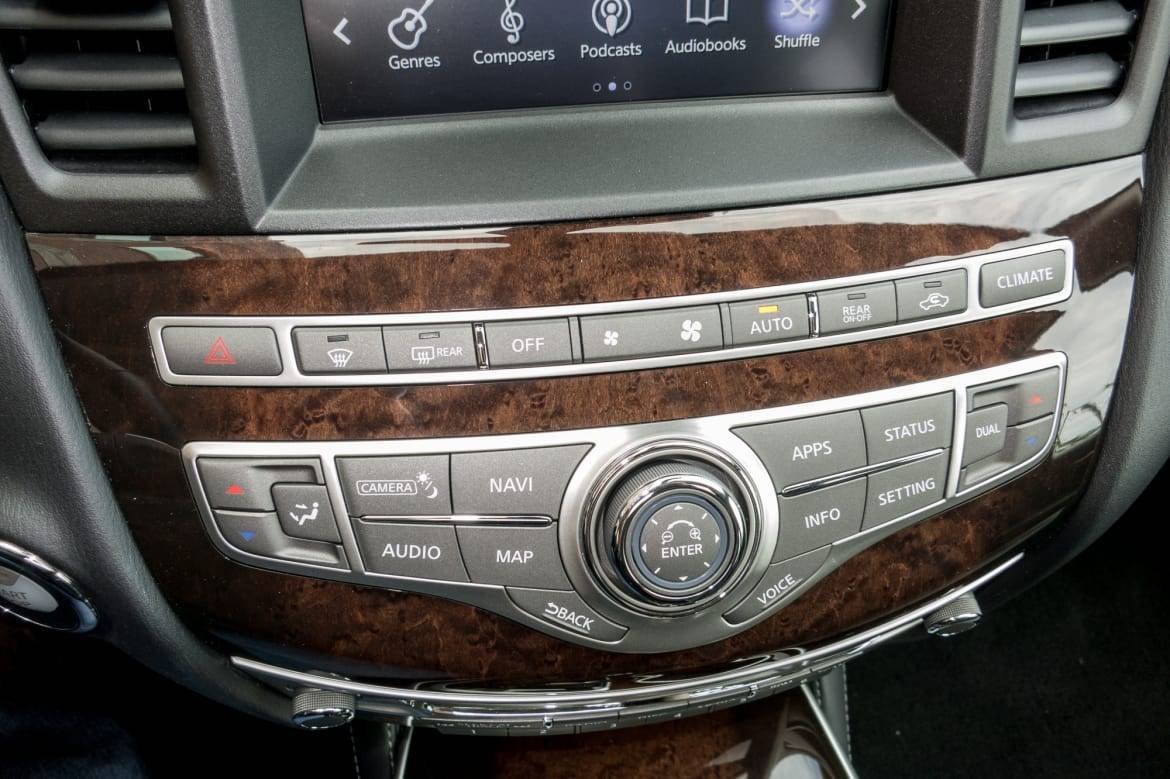 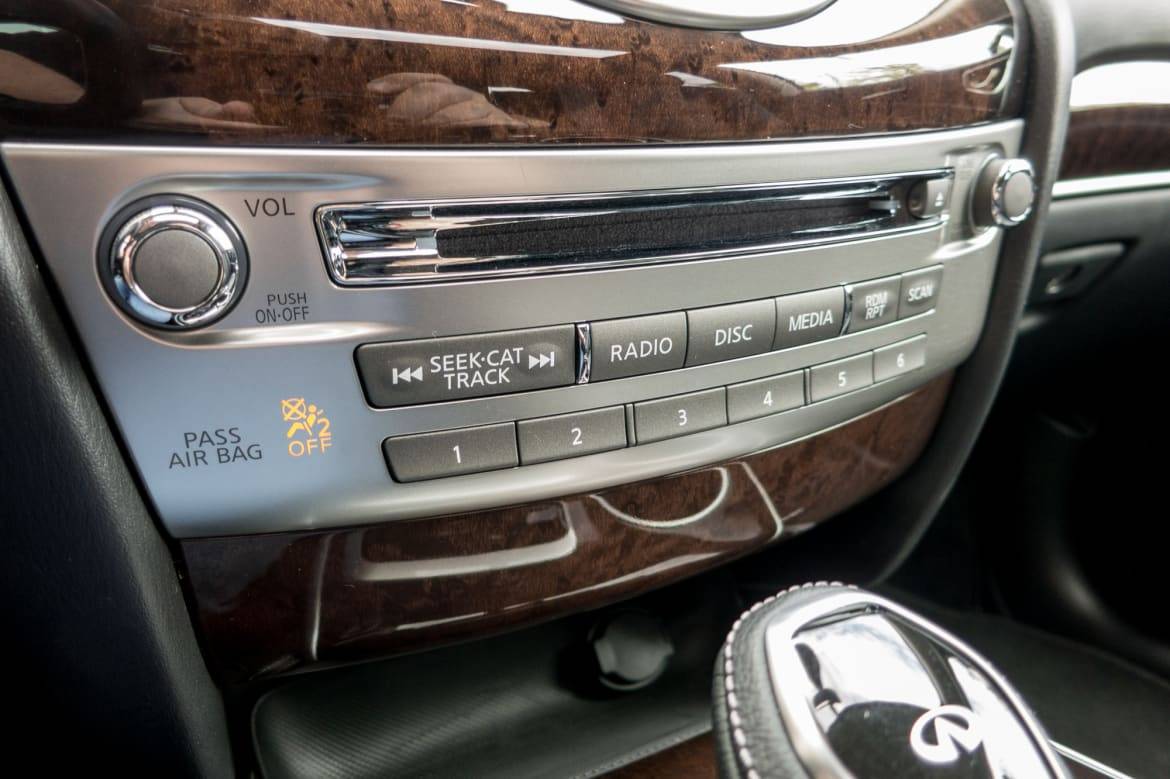 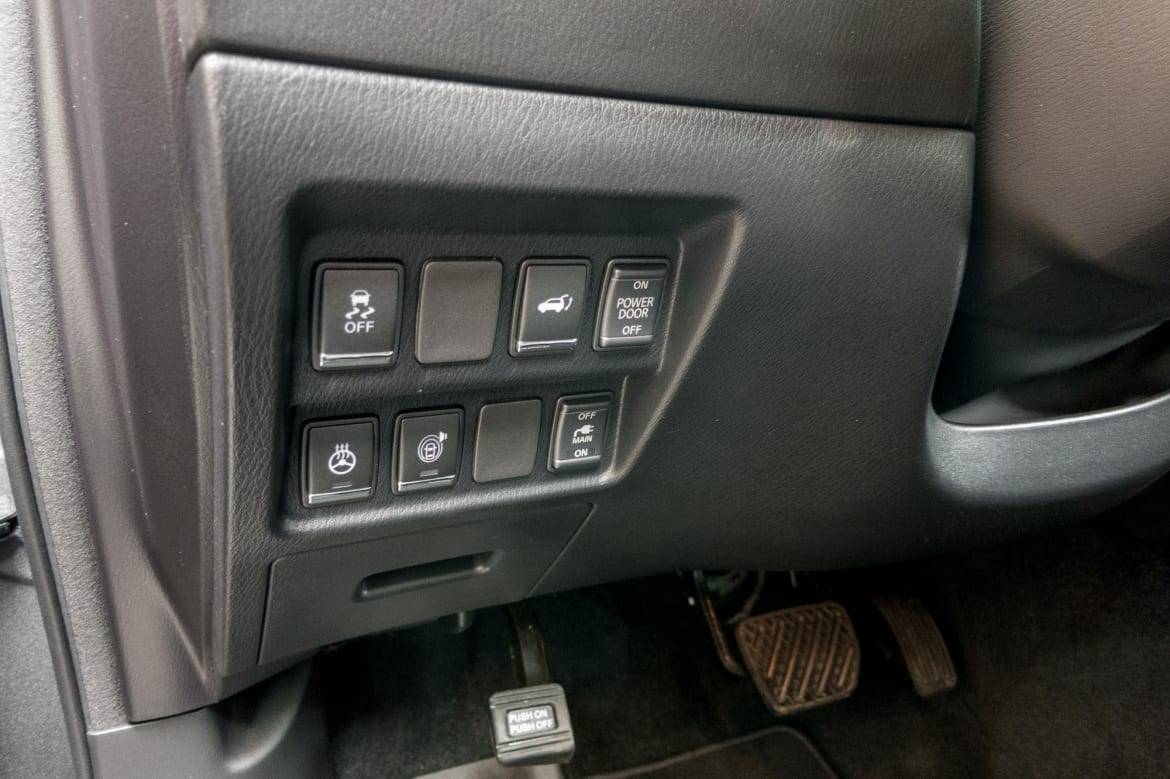 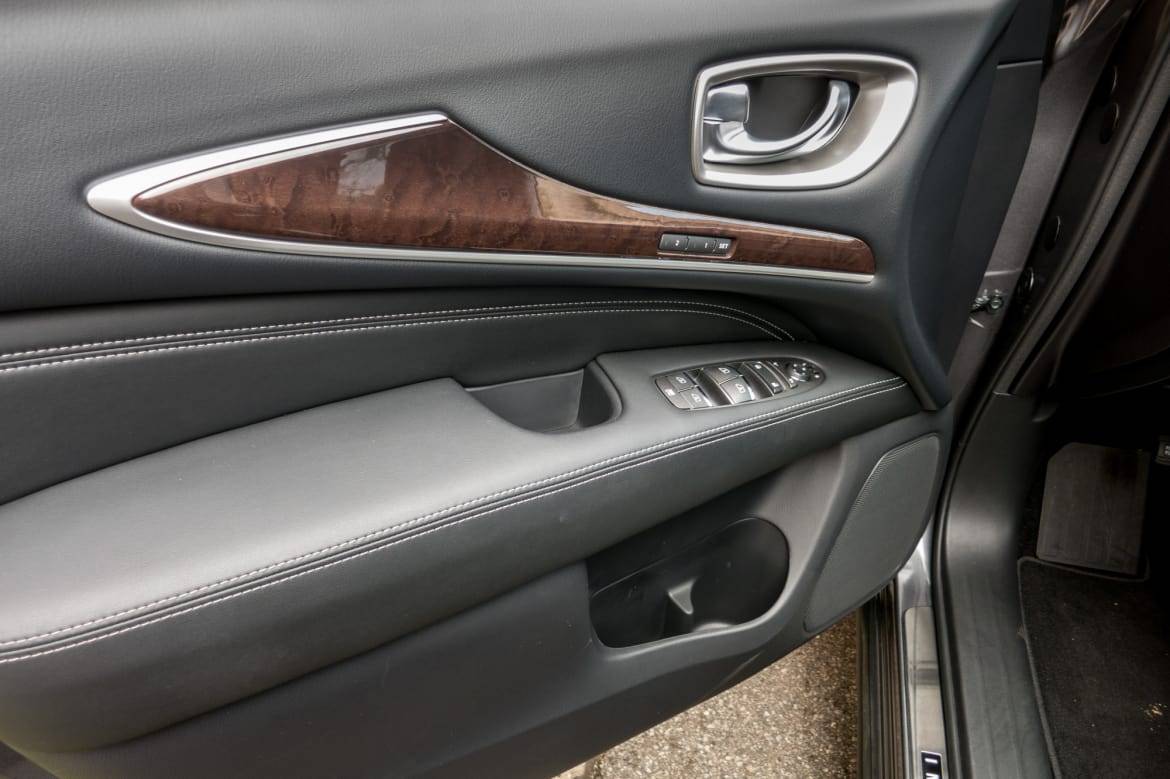 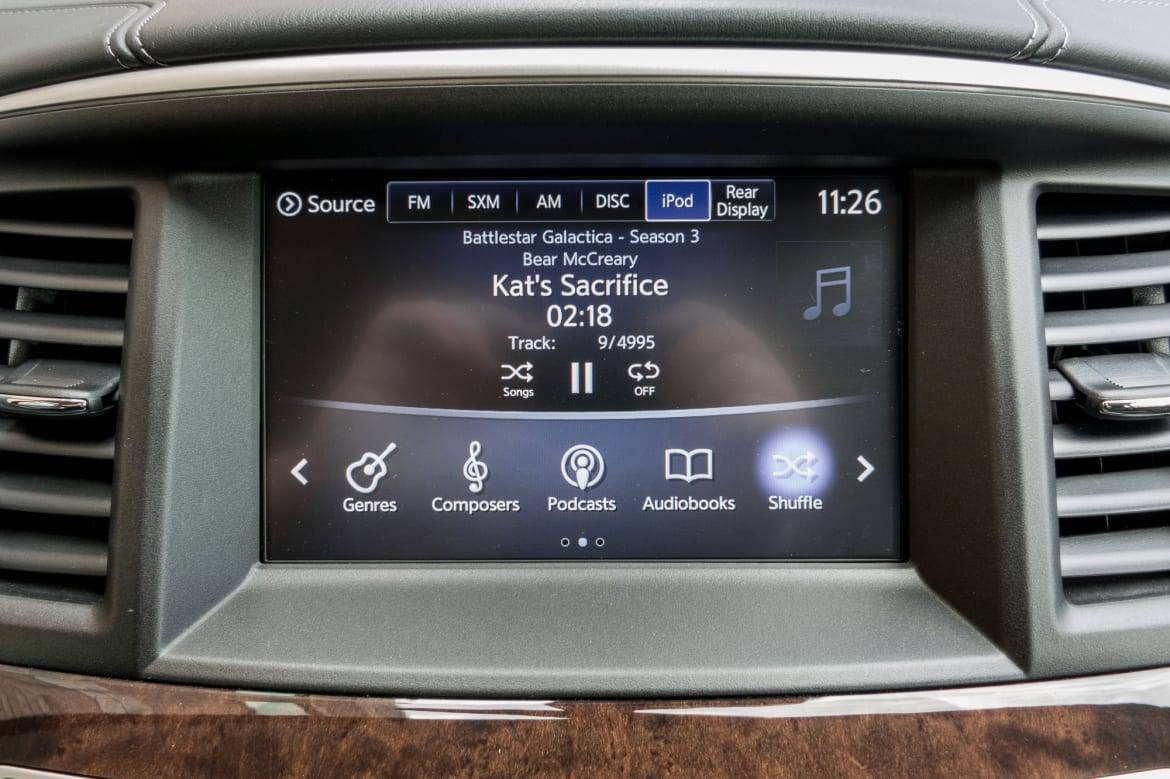 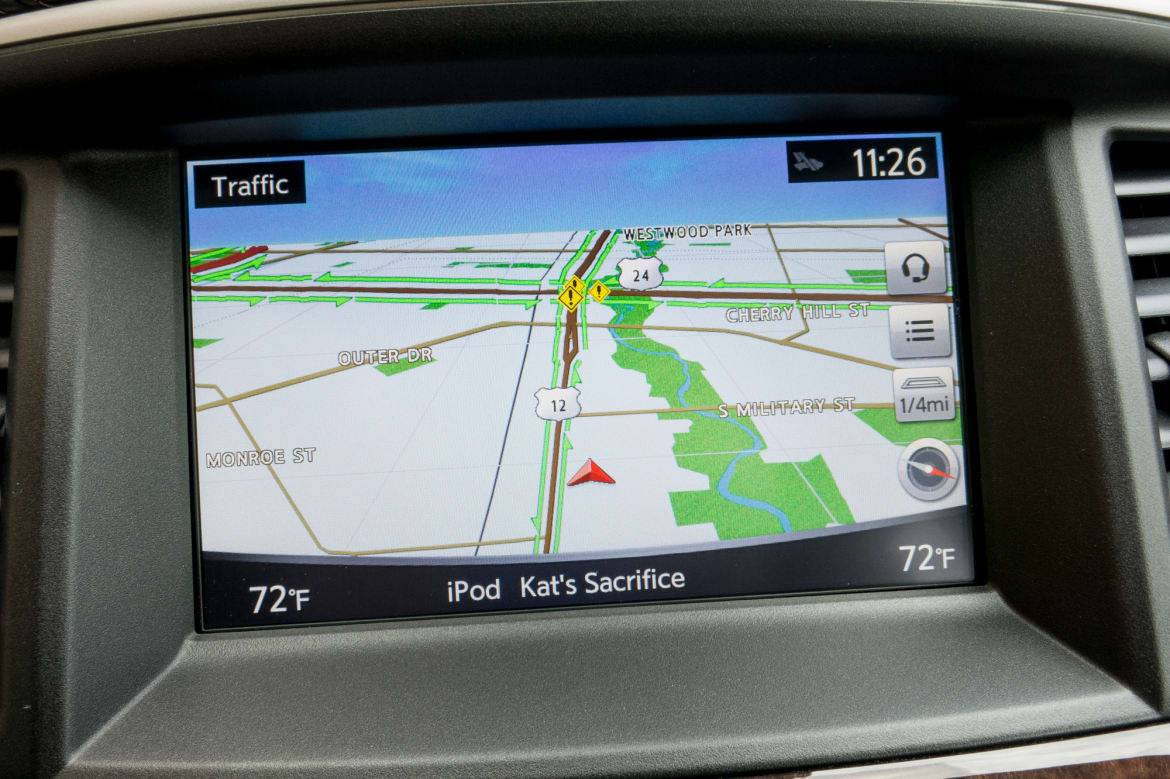 Every premium brand needs a luxury SUV, but that can lead to problems if it’s based on something less fancy. Such is the case with the 2017 Infiniti QX60. It started life as the new Nissan Pathfinder, a peppy, comfortable seven-seat family SUV with a reasonably powerful V-6 and plenty of room for people and stuff. Turning it into an Infiniti involved a lot of added luxury trimmings, a little more power, some retuned chassis bits and a higher price tag. But are these changes enough to justify its higher price tag? Do they make the QX60 competitive with vehicles like the Audi Q7, Buick Enclave and Acura MDX? They weren’t so successful last time around; have the new refinements helped?

While the QX60 is based on the Pathfinder, Infiniti stylists have done an excellent job differentiating it visually. Folds and creases in the sheet metal, plus a feline grille and headlights, combine with the unique D-pillar shape to give the Infiniti QX60 a look all its own. It’s not unattractive, but it’s not going to win any car-show beauty contests now or down the road. Its looks are definitely tied to the rest of Infiniti’s lineup, sharing a lot of styling elements with the automaker’s smaller sedans and coupes.

It’s not easy to make a big, two-box shape look appealing, but it can be done. The Audi Q7 may be the best example of this, with its clean lines, simple curves and flush features. The new Buick Enclave (arriving for 2018) is similarly sleek without appearing ungainly. The Infiniti manages to be inoffensive, but I don’t find it as appealing as its competitors.

The seats in the first two rows are quite comfortable — big and supportive, with plenty of room. The front seats are heated, and cooling is available as part of an optional Deluxe Technology Package. The second row has optional heating elements only. The third row is easy to get into thanks to some nifty folding technology for the second row, but it’s a little tight back there; save it for kids or adults on short trips. Visibility is also quite good, with a very low dashboard and beltline that provide a sweeping view forward and to the sides.

Sadly, that’s where the interior praise ends. The layout of the buttons and switches defies logic, perhaps because the low dashboard minimizes reachable space. There are several switches placed down around the driver’s left shin — controlling things like the vehicle’s safety systems — that are invisible and unusable while driving. They’re even hard to see when stationary; you have to bend over and look around the steering wheel.

And then there are things we might accept on a $36,000 Nissan that don’t cut the mustard on a $60,000 Infiniti. For instance, the QX60’s higher-mounted buttons are easier to use, but they look like they were lifted directly out of a Pathfinder; they’re not suited to the Infiniti QX60. The 8-inch multimedia system is also only partially refreshed: While the audio component is new, the navigation system isn’t, with graphics and resolution that feel dated compared with systems like Audi’s slick MMI, which features both rich graphics and Google Earth functions. At least there are plenty of USB ports — two data-capable ones for connecting personal electronics and three more for charging.

Nor is materials quality up to premium-brand snuff. The designs and shapes are only slightly different from the Pathfinder, and the sophistication of the designs is unimpressive. The doors, for instance, look like smooth plastic with a bit of faux wood glued to the middle. The graining on the soft upper dash pad doesn’t match the grain on the doors, and you can see the outline of the front passenger airbag in the dashboard; that hasn’t been the case in most premium-brand cars for well over a decade.

We found the Pathfinder’s interior to be acceptable if uninspiring. Pumping up the price for the Infiniti brings a new level of expectations, and the interior trappings aren’t commensurately better.

Fast but Not Fun

The Infiniti QX60 gets a little more power for its engine, a 3.5-liter naturally aspirated V-6 making 295 horsepower, up from the 284 the Pathfinder makes. Torque is up to 270 lb-ft, a slight bump from the Pathfinder’s 259. The has a continuously variable transmission, with a manual shift mode and programming that makes it behave like a traditional geared transmission in most driving situations. Front-wheel drive is standard, all-wheel drive optional.

Keep the mode selector in Normal mode and you’ll be greeted with a responsive, peppy engine that moves the QX60 with surprising alacrity. The transmission is inoffensive, behaving mostly like you’d expect a CVT to behave — delivering power linearly, never feeling like it’s hunting for a gear. Switch the rotary selector into Eco mode, however, and the engine is emasculated in favor of fuel economy, creating such an awful driving experience that you’ll likely decide the fuel savings aren’t worth it. Sport mode is similarly unpleasant, but in the opposite direction: The changes to its shifting and engine response make it jumpy and skittish. Leave it in Normal and the QX60 is a happier beast.

The steering won’t make you all that happy, however. It’s ridiculously heavy at lower speeds, requiring more effort, presumably in an attempt to make it feel more substantial and responsive than the Pathfinder. Yet on the highway it’s darty and oversensitive, making it difficult to maintain a line in your lane without keeping two hands on the wheel at all times and paying very close attention.

Two bright points: Ride quality is an excellent mix of good control and supple bump-soaking ability, and the brakes are strong and confidence-inspiring. That well-tuned ride, combined with a quiet, well-insulated cabin, make the QX60 more pleasant for passengers than for the driver. The Audi Q7 is far better to drive, with a responsive powertrain and sophisticated chassis control that shames the QX60’s driving experience.

At least the CVT does well for fuel economy, delivering an estimated 19/26/22 mpg city/highway/combined with all-wheel drive — a competitive number for a big SUV with a large V-6 engine. It’s better than the Audi Q7’s much smaller and less-powerful turbocharged four-cylinder engine, which is rated 19/25/21 mpg, but is rated exactly the same as the 3.5-liter-V-6-equipped Acura MDX.

The 2017 model year QX60 did quite well in crash tests, with top scores from the Insurance Institute for Highway Safety across the board (with the exception of headlight performance, judged to be poor). The National Highway Traffic Safety Administration awarded the QX60 five stars overall.

The QX60 has an impressive array of optional safety features, much of it electronic-based collision prevention. There’s forward automatic emergency braking with pedestrian detection; a 360-degree Around View Monitor with moving-object detection; rear parking sensors with brake intervention should an object be detected; blind spot warning and intervention; and even predictive forward collision warning that can detect if the car in front of the car in front of you is slowing.

Competing vehicles that seat seven in luxurious accommodations can be had from a few other brands. The closest may be the Buick Enclave, which was redesigned for 2018 and base price is similar to the QX60. We haven’t driven one yet, but its amenities, luxurious appointments and space certainly make it comparable. You’ll spend more to get an Audi Q7 and likely end up with less car in terms of amenities, but it provides a superior luxury-driving experience — its materials quality, design and sophistication all put the QX60 to shame. The Acura MDX has nearly as much room as the Enclave, but it suffers from some similar issues as the QX60 in terms of luxury sophistication, with a lot of lesser Honda parts shining through the Acura veneer. You can compare all four competitors here.