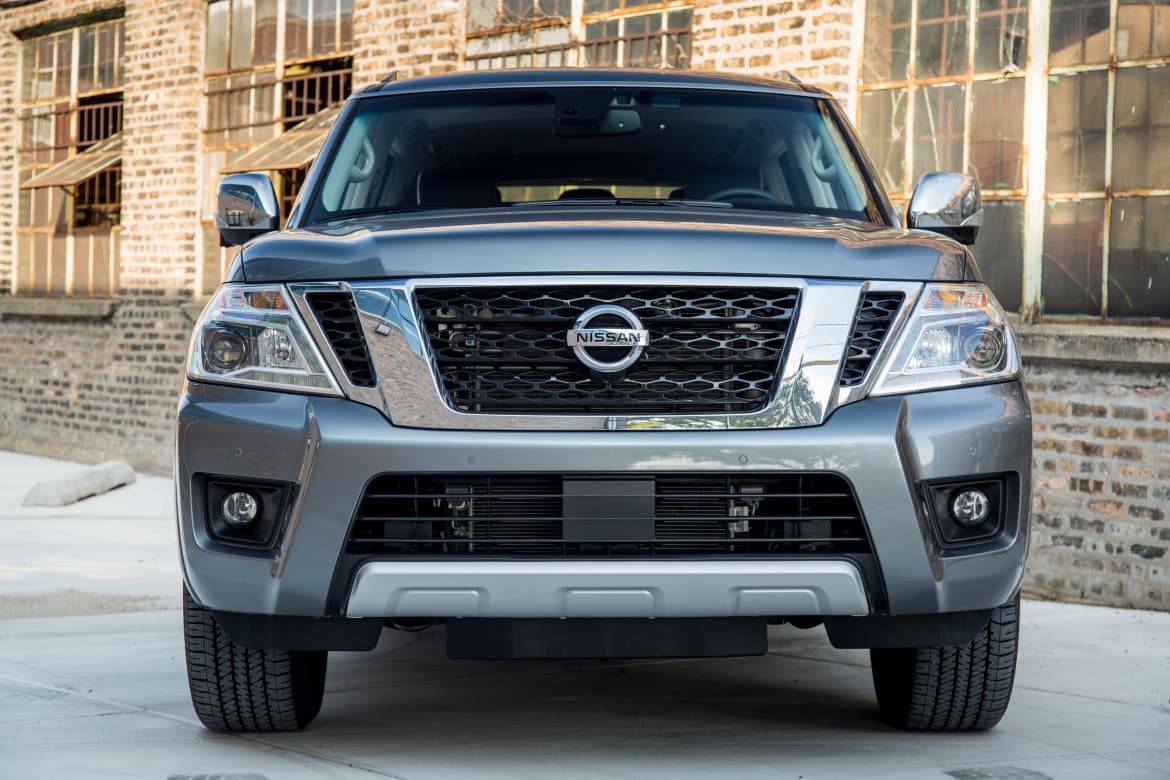 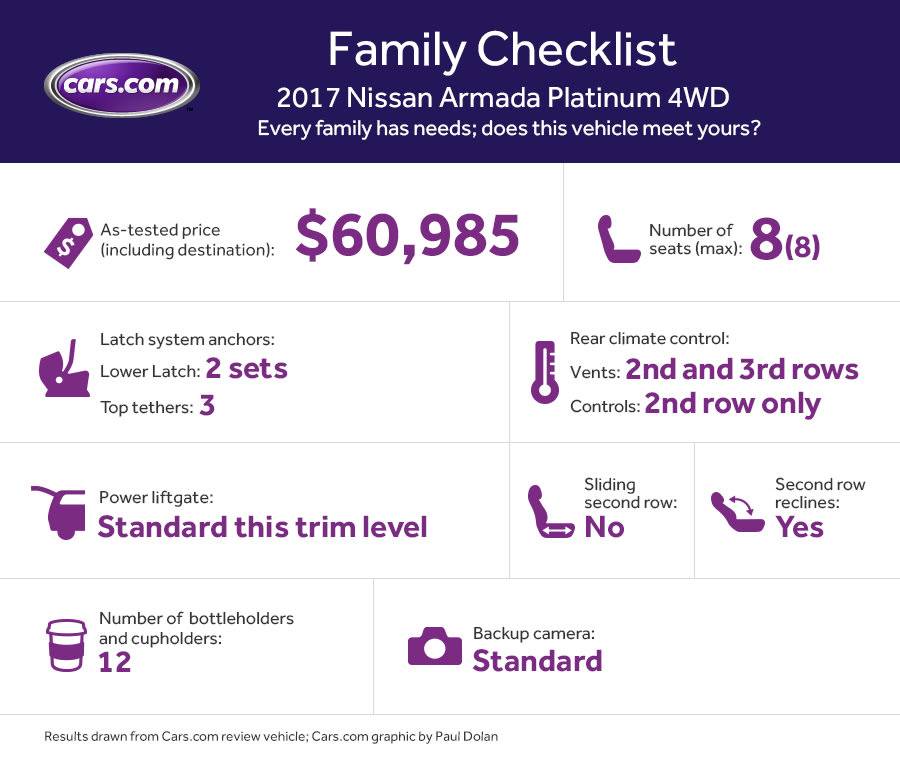 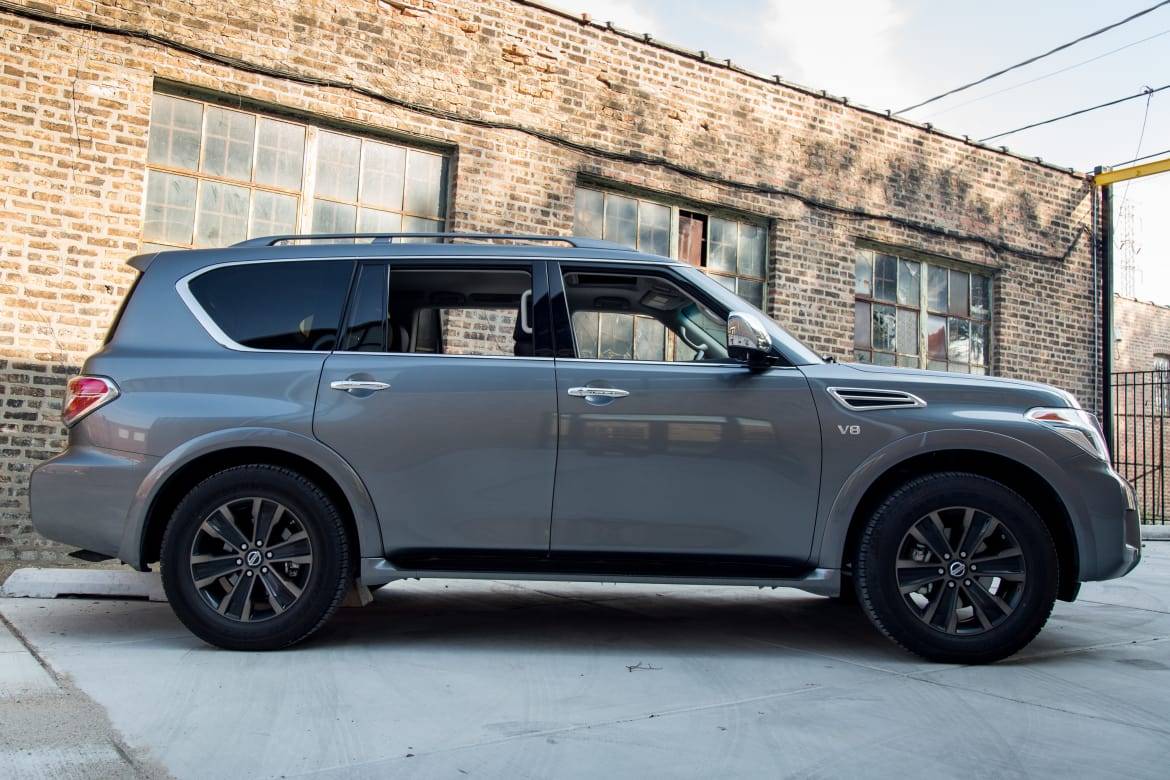 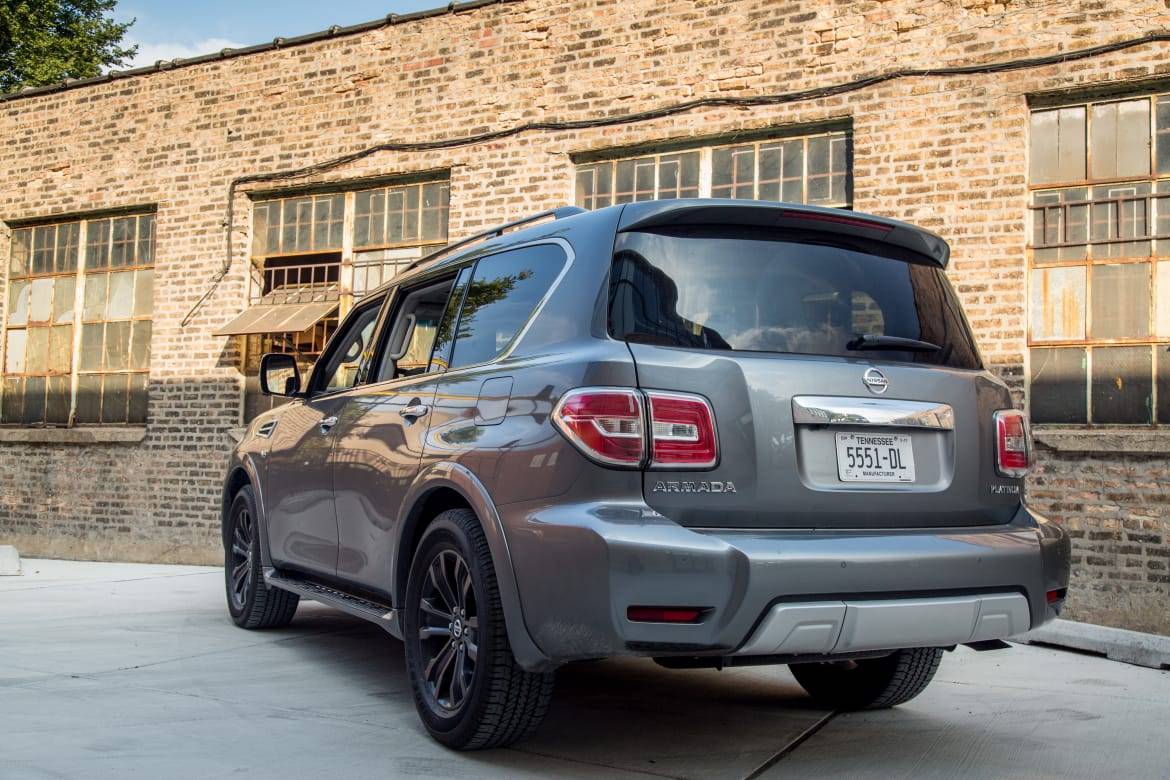 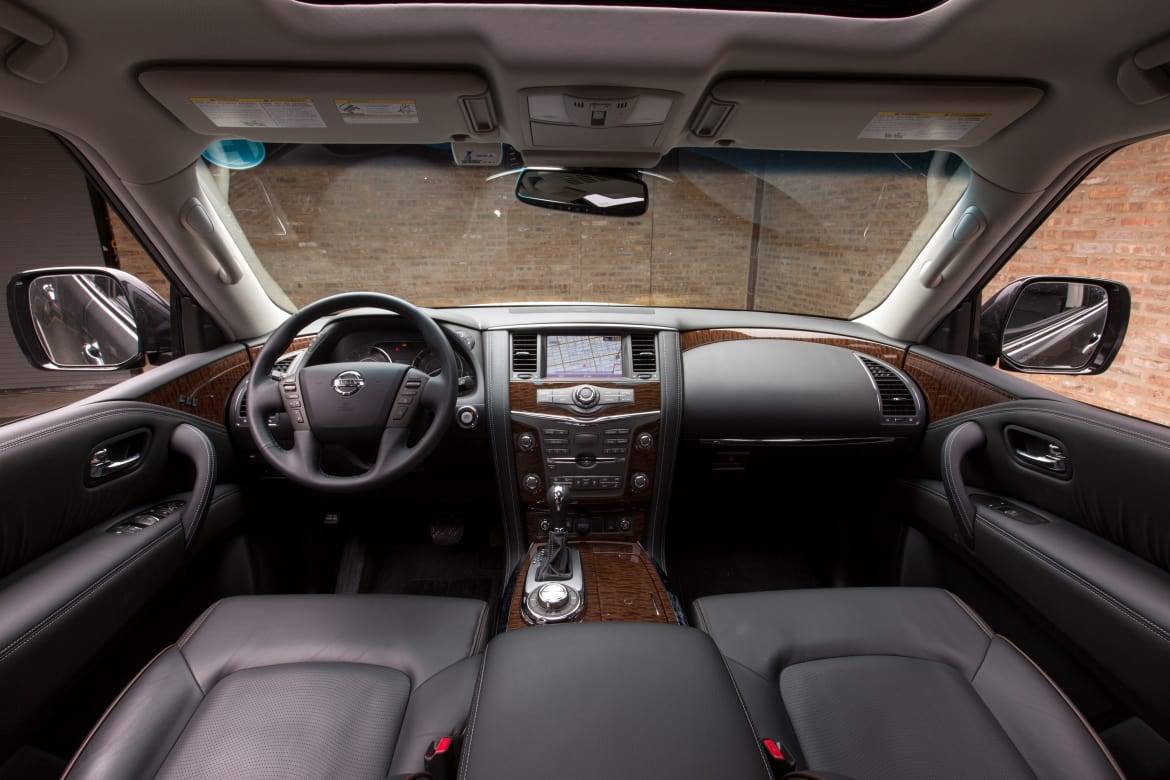 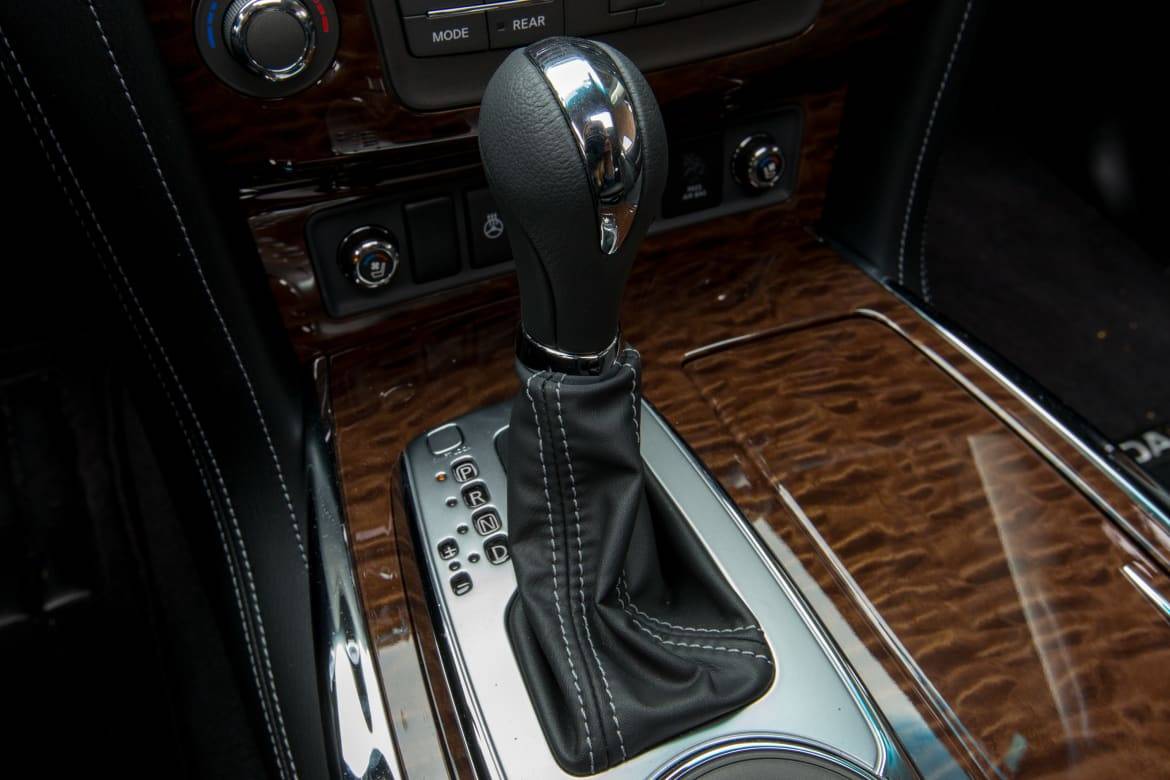 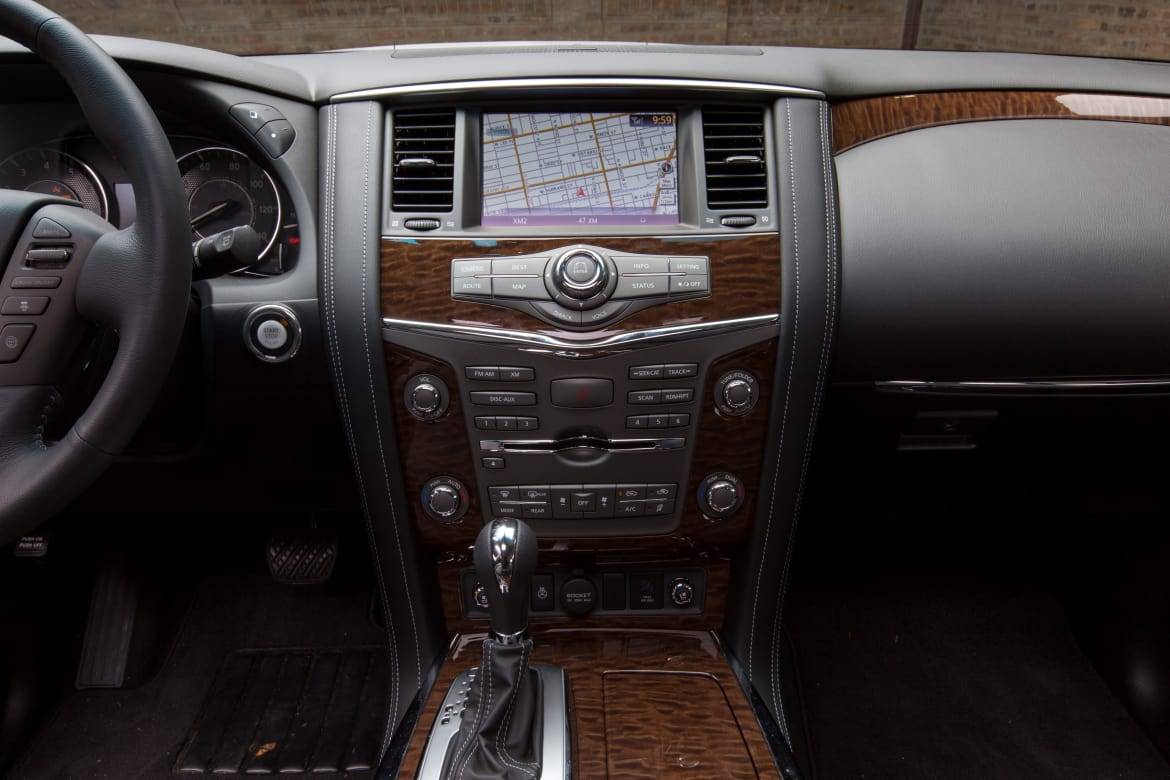 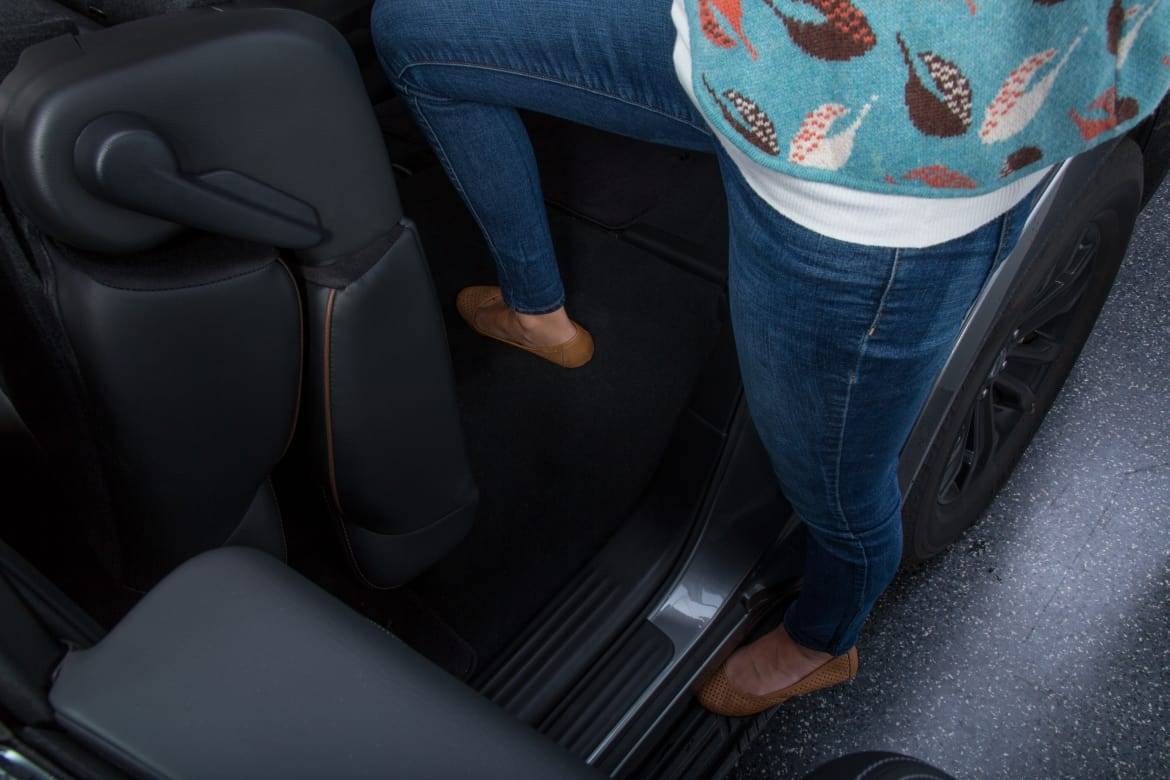 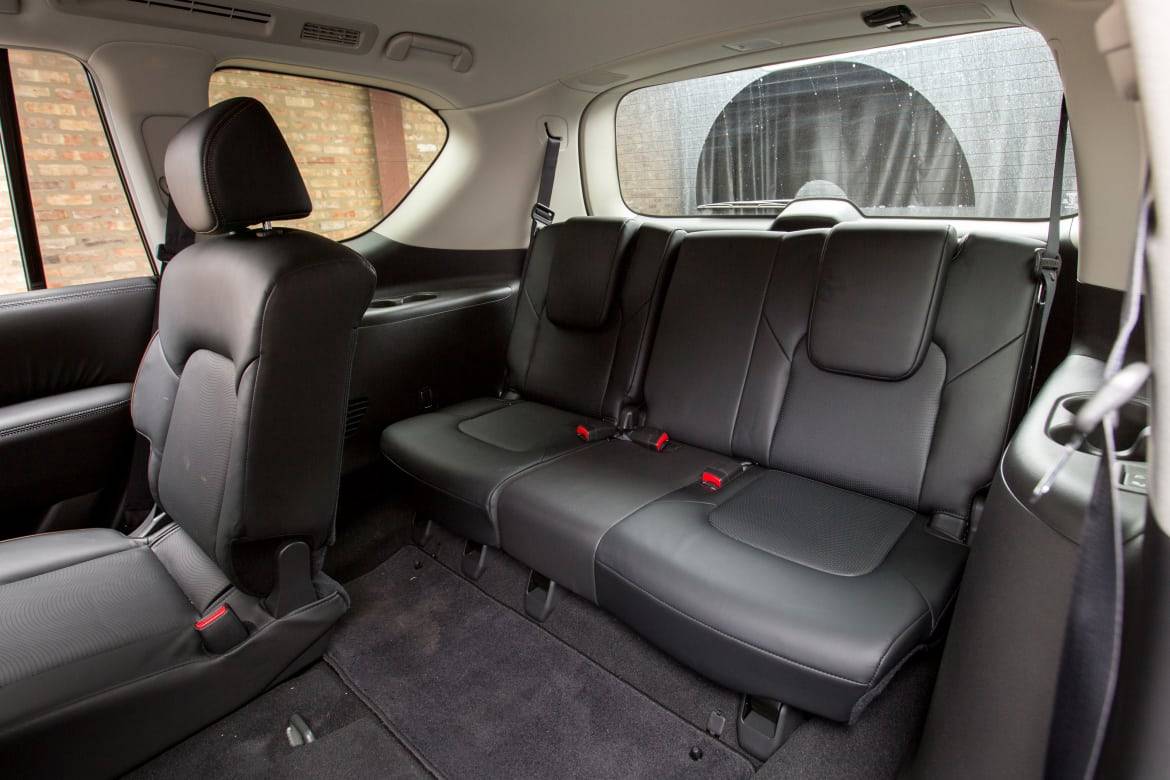 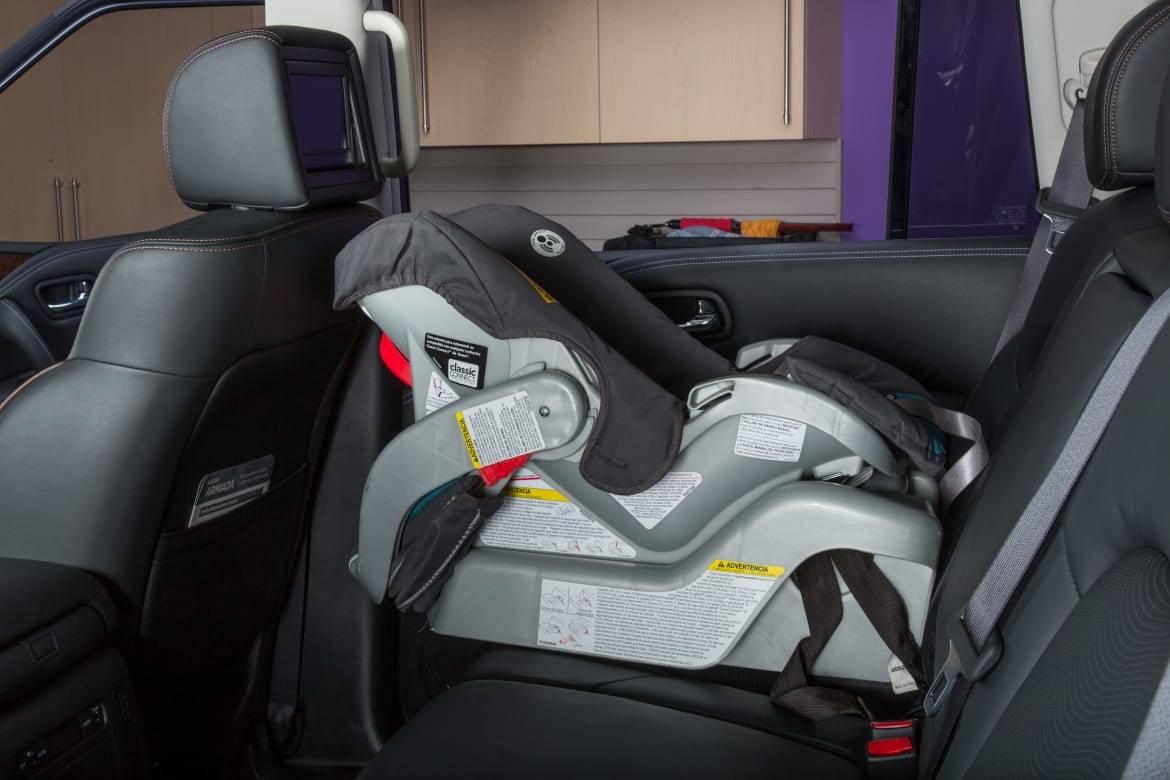 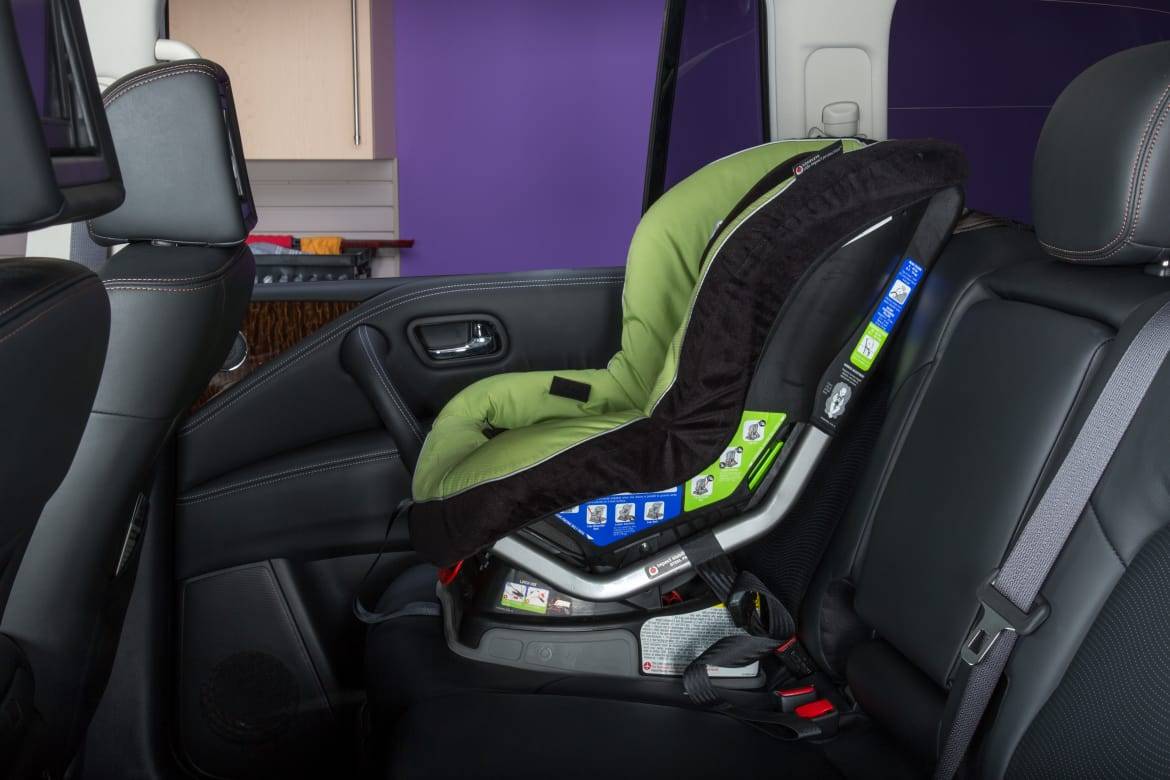 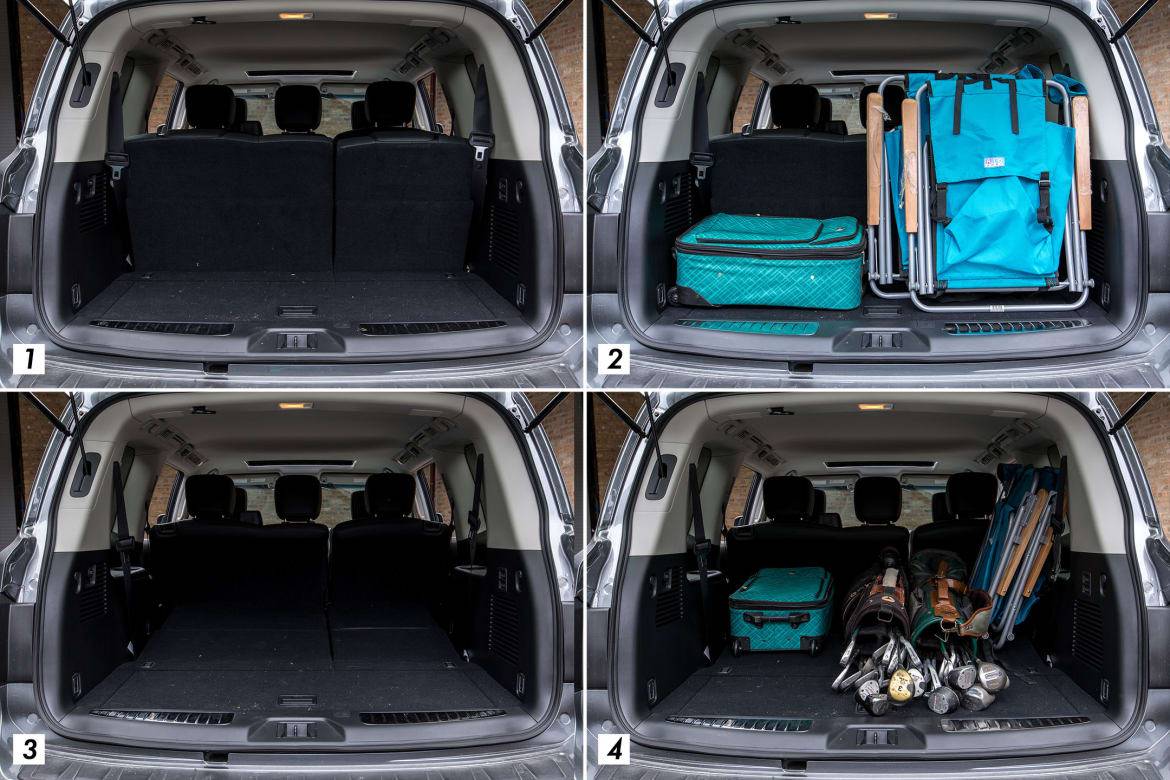 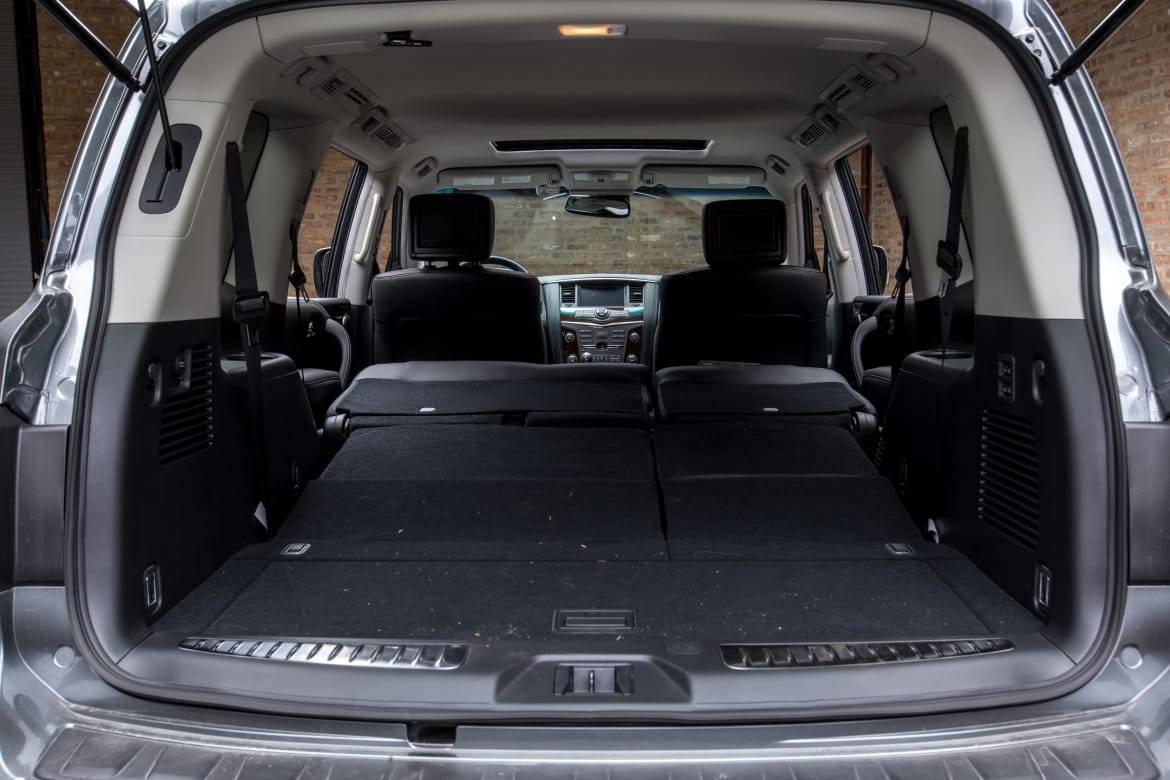 The Armada skipped the 2016 model year and is back for 2017 with shapelier styling, a more upscale interior, a revised powertrain, and additional safety and convenience features. Click here to compare the models side by side. It competes against other three-row behemoths like the Chevrolet Tahoe, Ford Expedition and Toyota Sequoia; compare them here.

I rode in the previous-generation Armada to a trailhead on a hiking trip in Utah, and the boxy, rugged-looking SUV was at home wearing a mantle of dust and dirt, crawling over rocks in the desert. In what I can only assume was an effort to give the Armada a more upscale look (similar to the Infiniti QX80 on which it’s based) and increase its appeal to a wider base, Nissan has softened the SUV’s edges and turned it into a lumpy, oddly shaped Project Runway fail.

The front end is its best side; its stout, stern face resembles the brand’s other trucks. Things get slippery after that, with awkwardly placed curves and swooping angles replacing the previous model’s crisp lines and sharper, truckier silhouette.

In terms of ride, bump absorption is decent, but you probably won’t notice because the Armada’s handling is a roller-coaster ride of dips and bobs, lurches and lunges. Sweeping curves are a glaring weakness; it rolls through corners with an unsettling, tippy lean. It doesn’t feel planted on the highway, either, due to vague, numb steering that’s prone to wandering.

The Armada loses again when it comes to maneuverability. With a larger turning circle than its rivals, it’s unwieldy on city streets and — as I learned while spending too much time delicately wedging it into more than one parking garage — extremely challenging to park.

For power and towing, however, it has few rivals. The Armada pulls away strong from a stop and never lets up, with impressively robust muscle for passing and merging — even when loaded with my family of five. That’s not true in lighter-duty vehicles. Both horsepower and torque are up this year; the standard 5.6-liter V-8 makes 390 horsepower and 401 pounds-feet of torque. The V-8 is paired with a new seven-speed automatic transmission, replacing the old Armada’s five-speed. Shifts are subtle and well-timed for seamless power.

Rear-wheel drive is standard and a stout all-wheel-drive system is available. A selectable transfer case provides three settings: automatic all-wheel drive, locked 4-High and 4-Low for more challenging off-road or bad-weather conditions. With either drive type, the Armada can tow up to 8,500 pounds — much higher than the standard tow ratings of the Expedition (6,000), Sequoia (7,400) and Tahoe (6,500).

It’s inside where the Infiniti mimicry succeeds; the Armada’s cabin belongs in a luxury SUV. It’s polished and classy with plenty of soft-touch surfaces; enormous, cushy seats; and upscale woodgrain trim. Options like a heated steering wheel and plush leather seats are welcome.

The Armada comes standard with eight seats, and a seven-seat layout with bucket seats in the second row is optional in the top-of-the-line Platinum trim. I tested an eight-seat model with a second-row bench. It was roomy and comfortable but hit-and-miss in the features department.

The Platinum’s dual-screen DVD entertainment system’s big, seat-mounted screens and wireless headphones are a win, as are the power-folding third-row seats. The second-row seats, however, don’t slide, and the Armada’s one dinky moonroof is dwarfed by the cabin’s enormity.

For families with young kids, the disappointments stack up quickly. First, there are only two top tether anchors even though the second-row bench accommodates three passengers. This makes it less flexible, as it’s unsafe to use a forward-facing car seat without connecting it to a top tether anchor. Click here for the Armada’s Car Seat Check.

For families in need of a third row, the Armada won’t work. Although the second-row bench quickly and easily flips forward for third-row access, getting back there is tough. The step-in height is extremely high and, once inside, there’s an additional hump to climb over. There are three sets of seat belts back there, but the middle spot is unusable, even for a skinny kid. By the numbers, there’s just 28.3 inches of legroom in the third row, a few inches short of what the 2015 Armada offered and well shy of the Expedition (37.7) and Sequoia (35.5). Only the Tahoe offers less, with 24.8 inches.

As with the second row, the third row also has car-seat issues. It has only one top tether anchor, and it’s in the lip of the cargo area. When in use, the car seat’s tether strap spans the width of the cargo area, eating into available cargo space.

As a mom of three kids, I put the Armada’s second and third rows to the test, and the SUV failed. Since my twin toddlers are rear-facing, their car seats prevented me from accessing the third row via the second row. Instead, to get my 6-year-old to her third-row booster, she climbed through the cargo area — a steep and challenging climb for her that still required a boost from mom’s muscles. If the Armada were my daily driver, I would dread this maneuver EVERY. DAY.

Despite its redesign, the Armada does not get a new multimedia system. The touchscreen seems small in such an enormous cabin, and its low-resolution graphics look outdated.

There’s not a huge learning curve to figure it out, but some small quirks annoy. I appreciate its volume and tuning dials for no-nonsense audio functions, but getting to the preset radio options takes too many steps through the screen. Also, a simple home button alongside the touchscreen would simplify things.

The Armada is huge on the outside, but it’s puny when it comes to storage space. The center console in the first row looks huge, but pop it open and the box inside is quite small. In back, it’s a similar story. When all three rows are in place, there’s just 16.6 cubic feet of space behind the third row — less than the prior-generation Armada (20 cubic feet), the Expedition (18.6) and the Sequoia (18.9); only the Tahoe offers less (15.3).

Fold the third row to make 49.9 cubic feet of room — again, much less than the last Armada and its competitors. Getting cargo inside will be challenging because of the lofty lift-over height and uneven load floor. When the third row is folded, the cargo floor is inclined slightly.

The 2017 Armada has not yet been crash-tested by the National Highway Traffic Safety Administration or the Insurance Institute for Highway Safety.

A host of new safety features are available for 2017. A backup camera is standard, and every model but the base trim comes standard with the very helpful AroundView monitor with Moving Object Detection, which displays multiple views of the car and sounds an alert when the vehicle is getting too close to people or objects. Other newly available safety features include adaptive cruise control, forward collision warning with automatic emergency braking, lane departure warning and prevention, blind spot warning, and backup collision intervention with automatic braking.

The 2017 Nissan Armada starts at $45,995 including destination — slightly higher than the outgoing model but a bit less than its competitors. Yet despite a lovely cabin and ample power, the Armada falls short when it comes to everyday drivability; it’s unwieldy, it’s fuel-thirsty, and it lacks competitive space for people and cargo. It’ll tow your boat with gusto, but don’t expect it to do anything else very well.