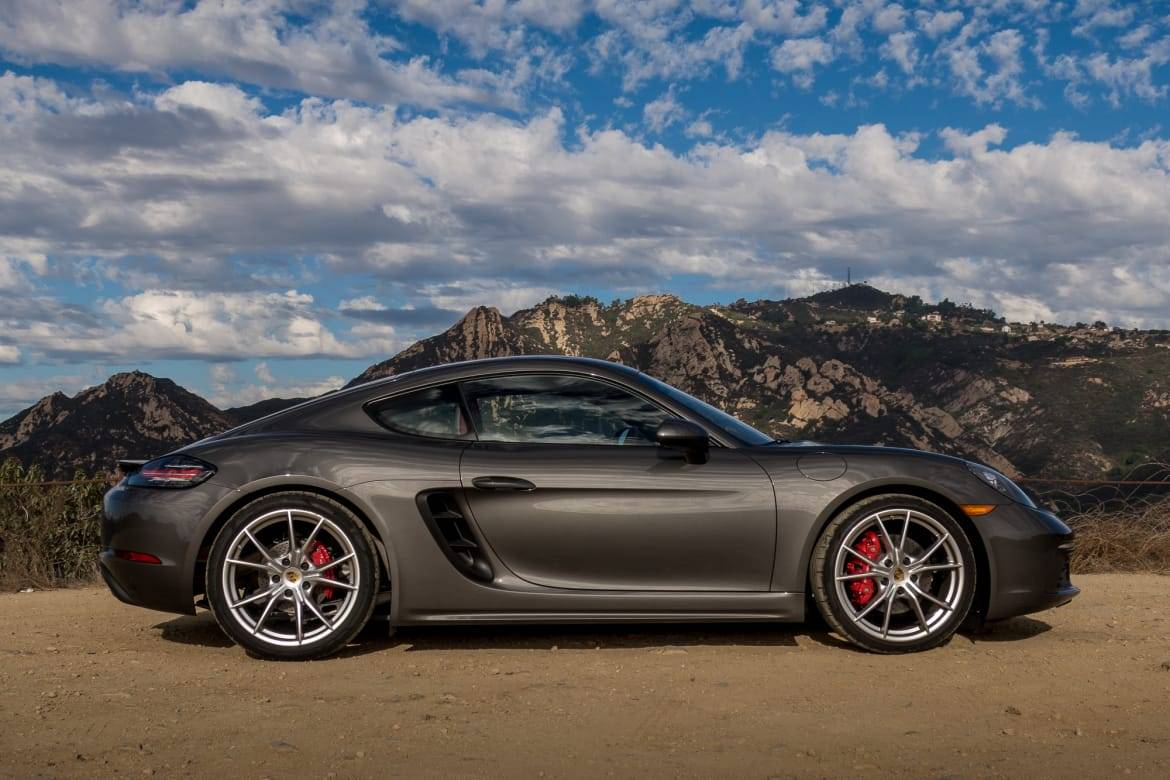 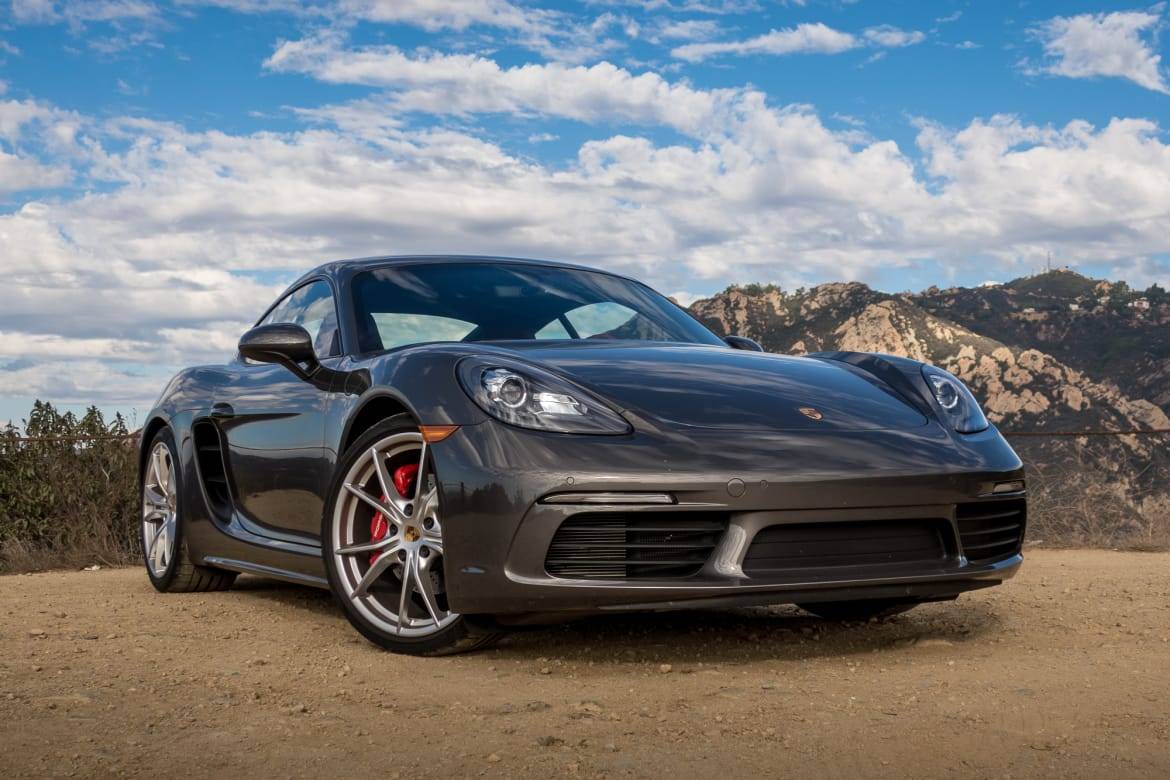 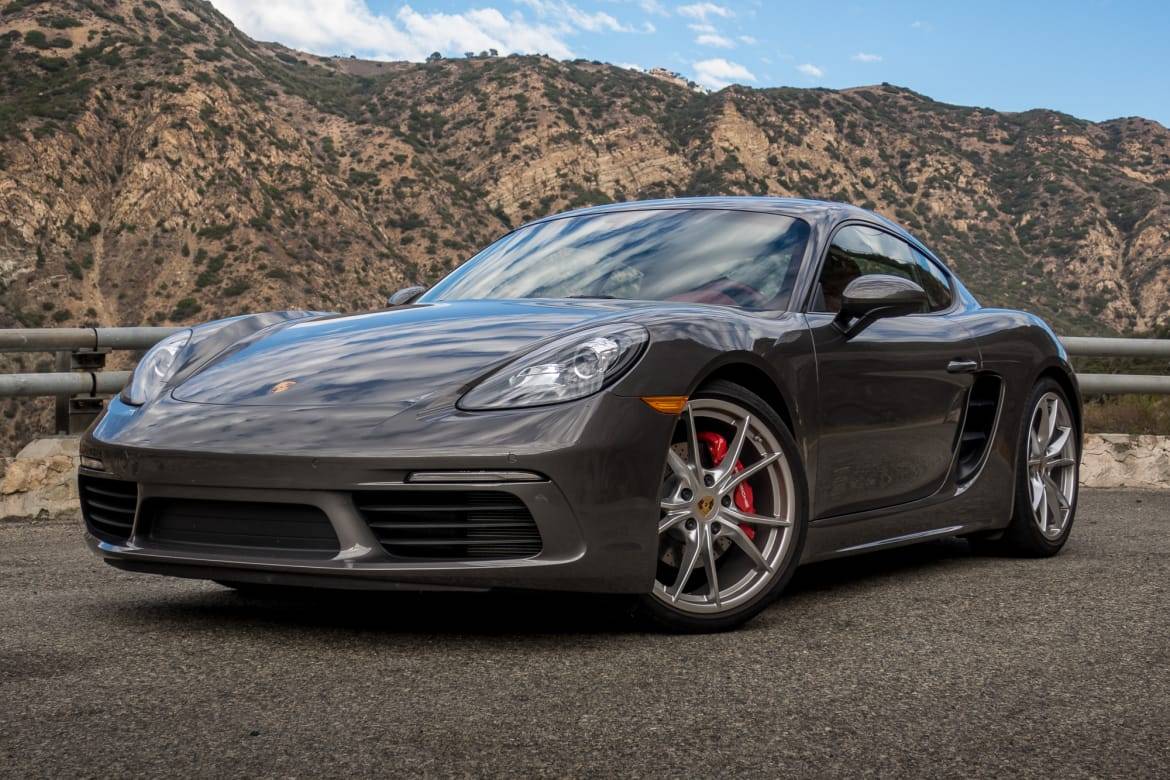 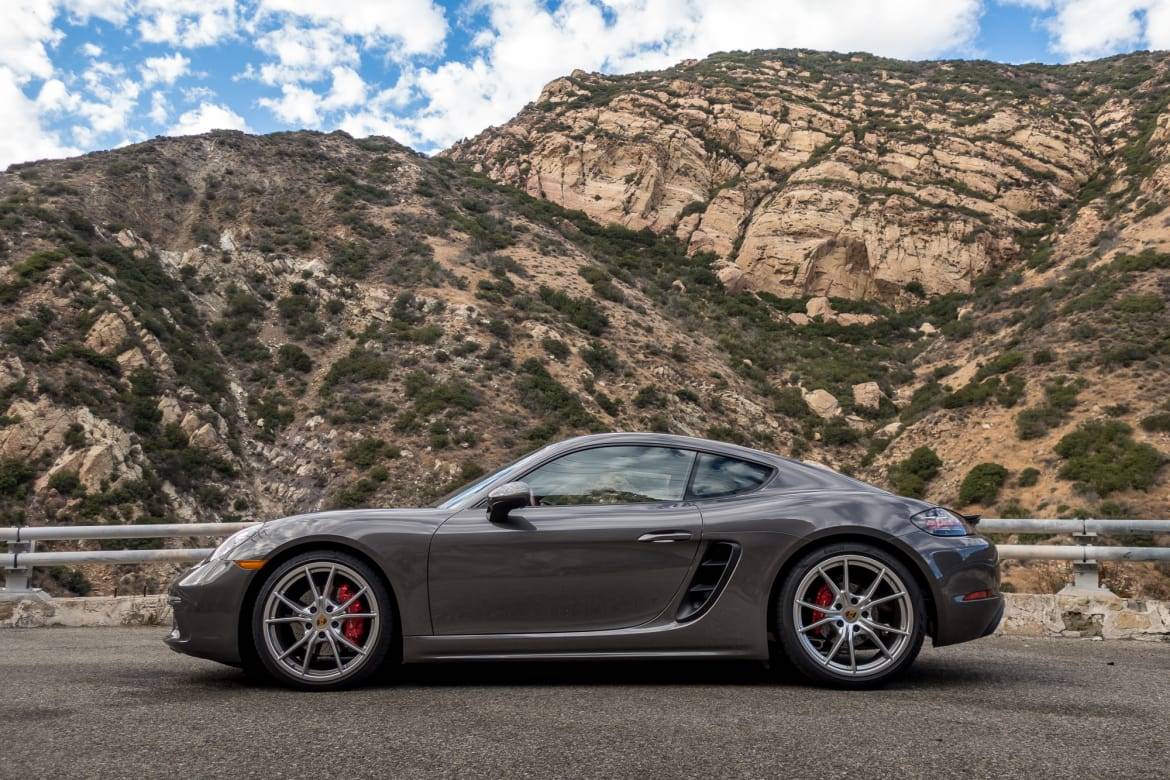 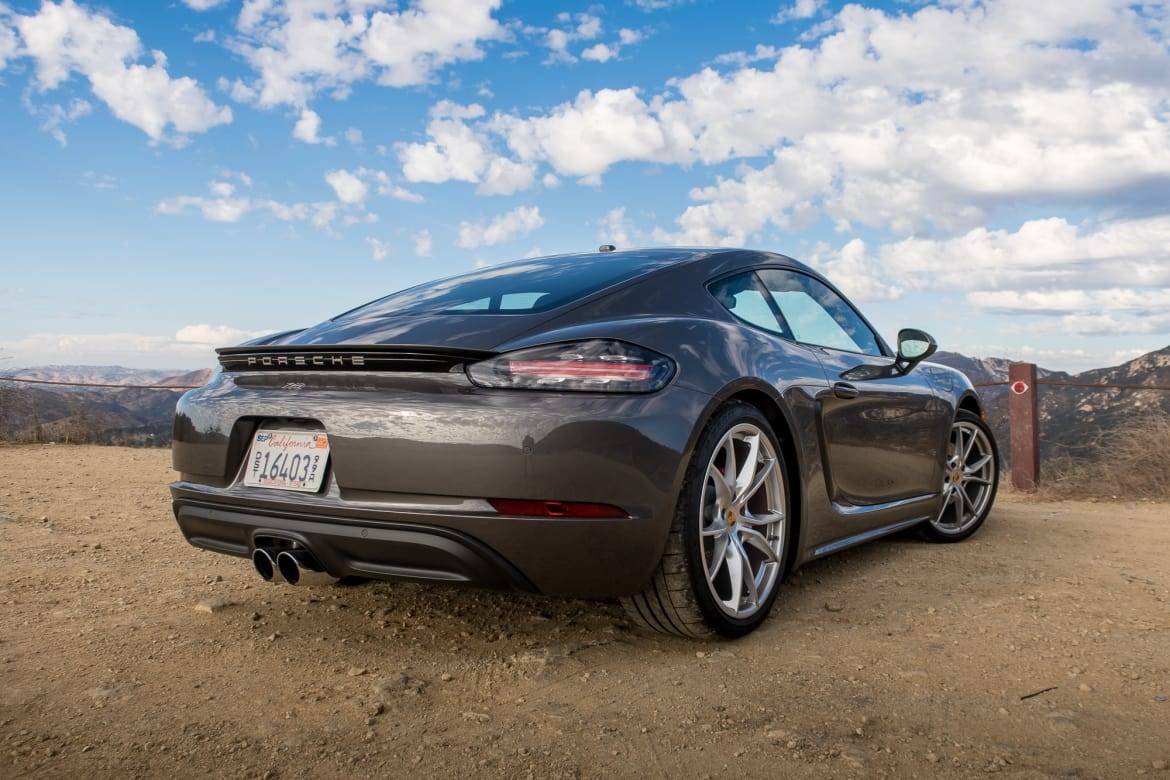 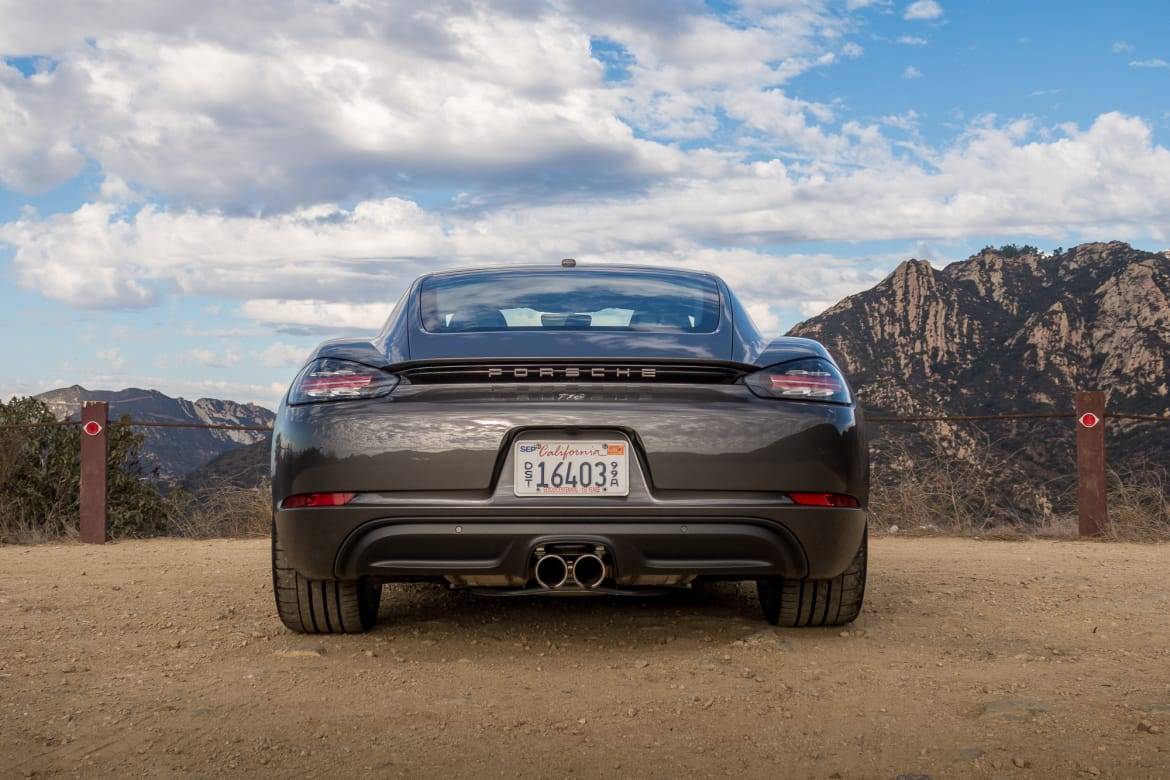 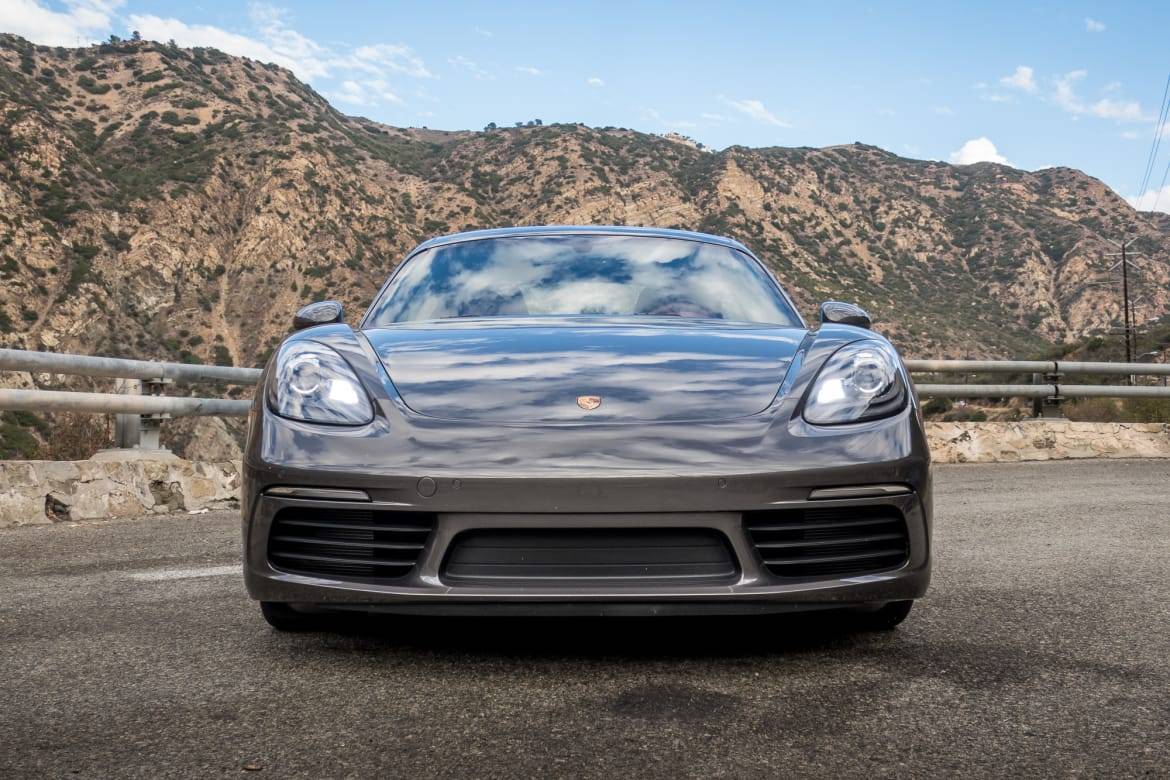 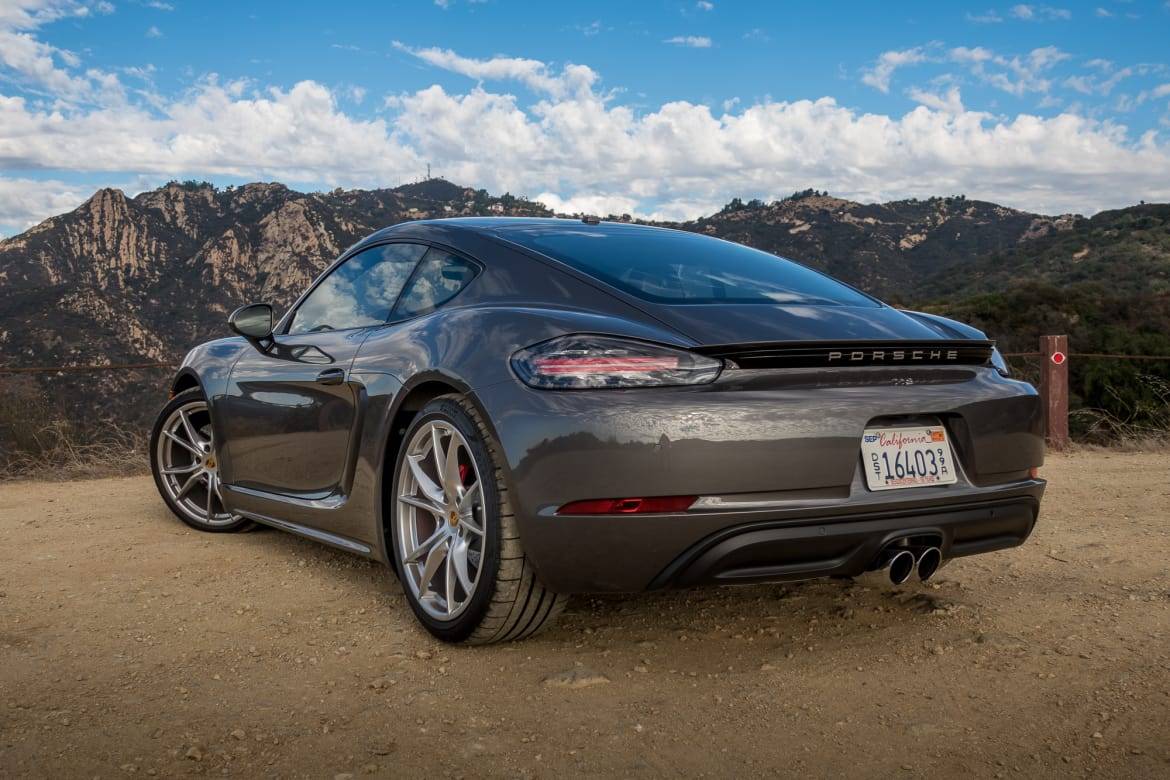 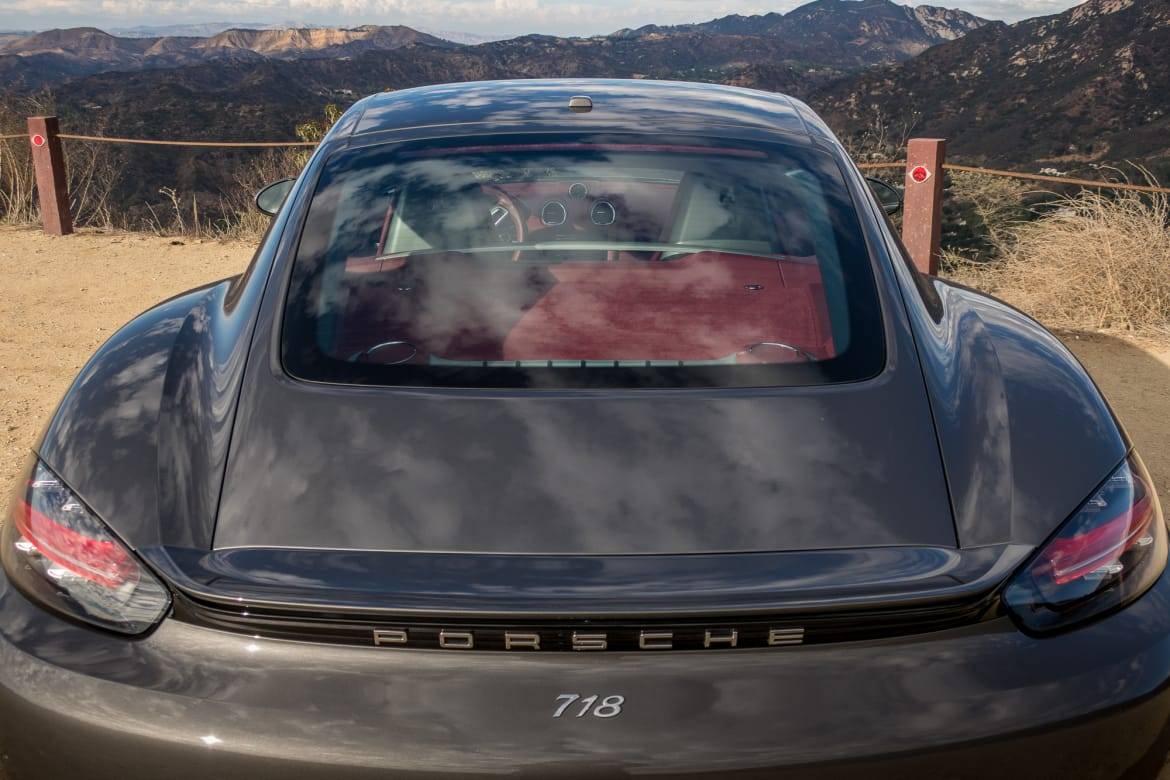 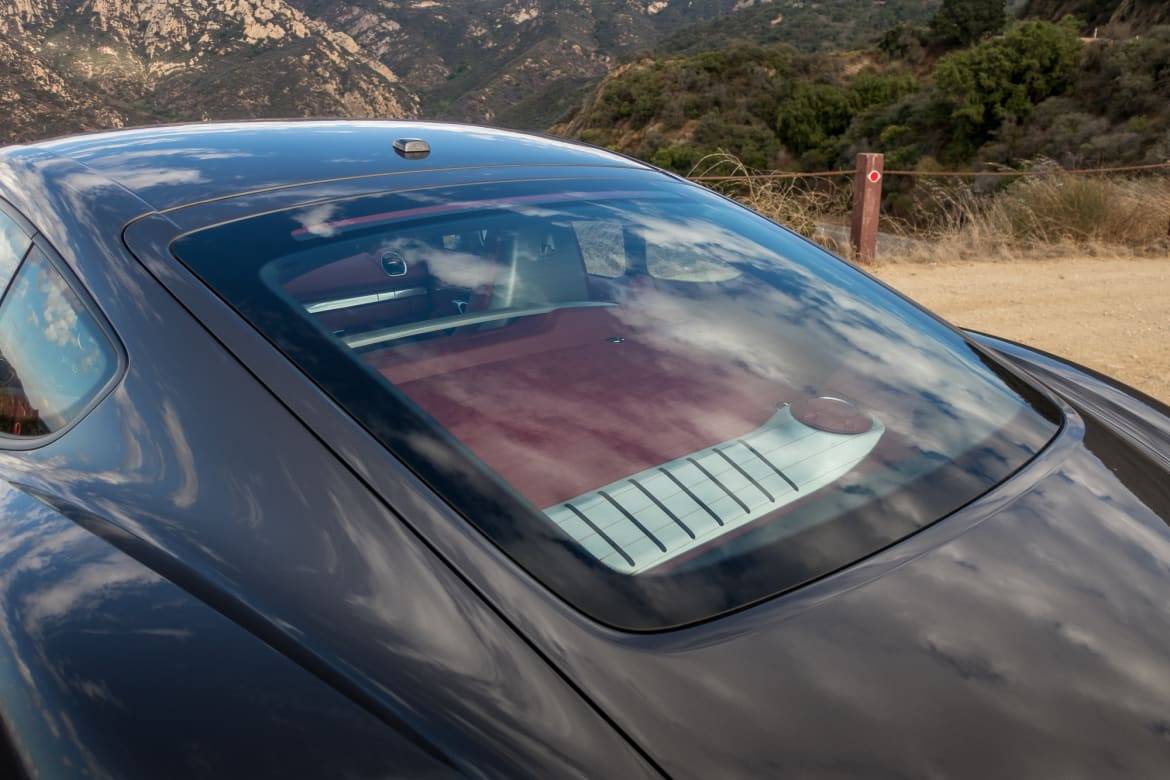 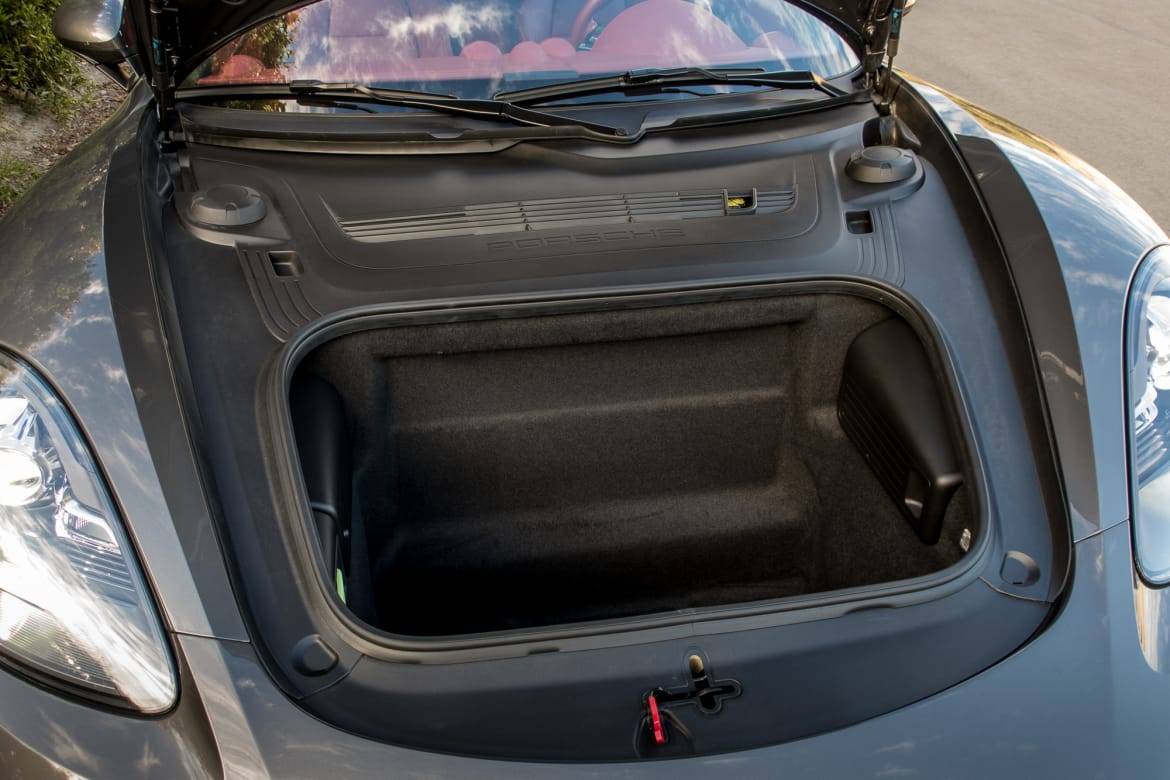 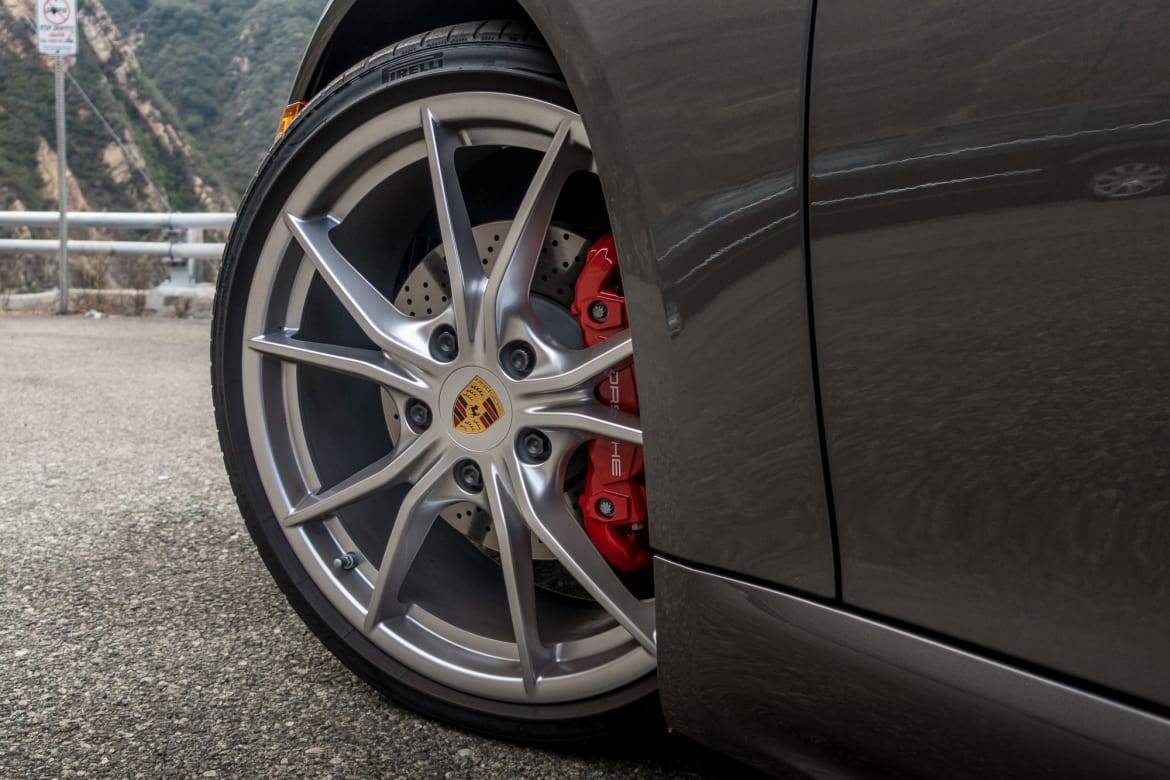 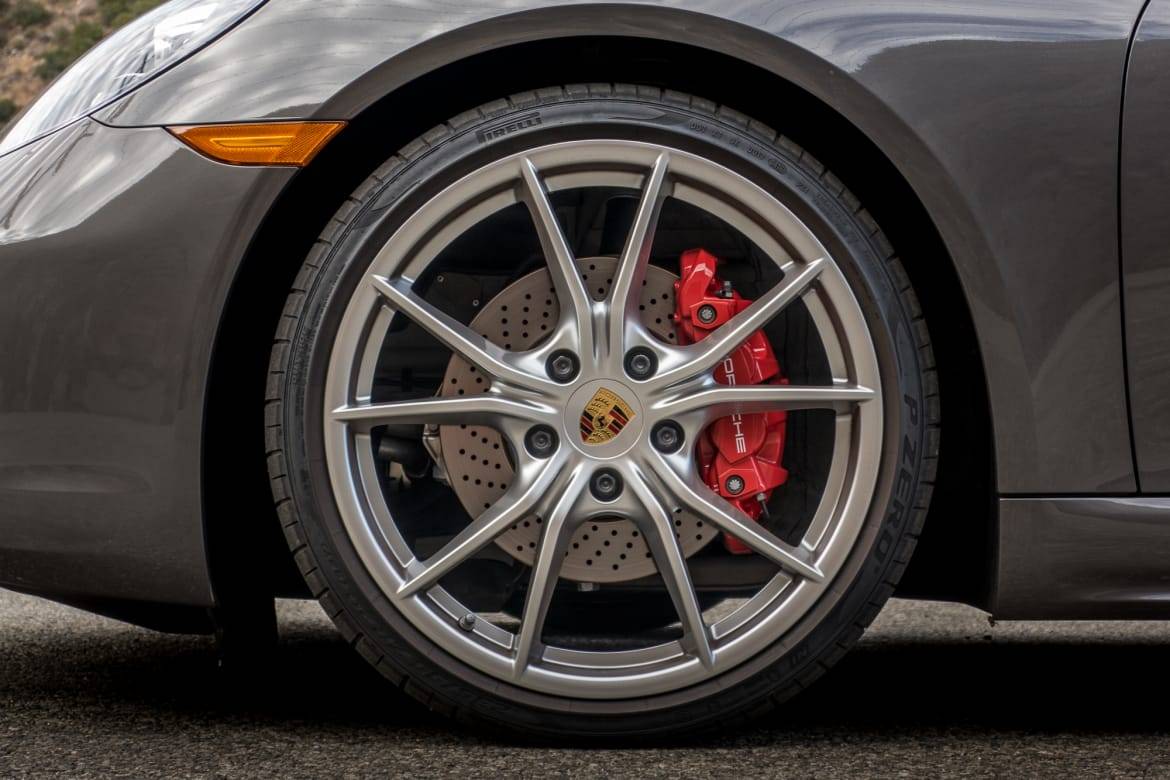 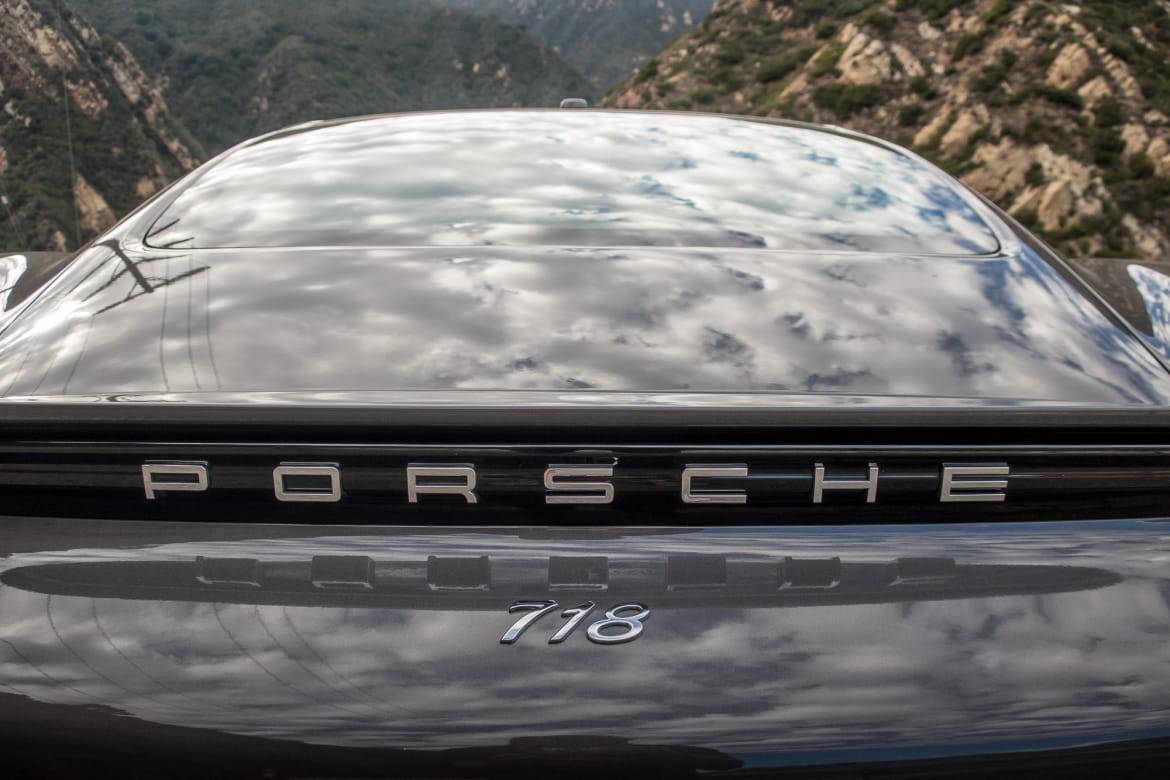 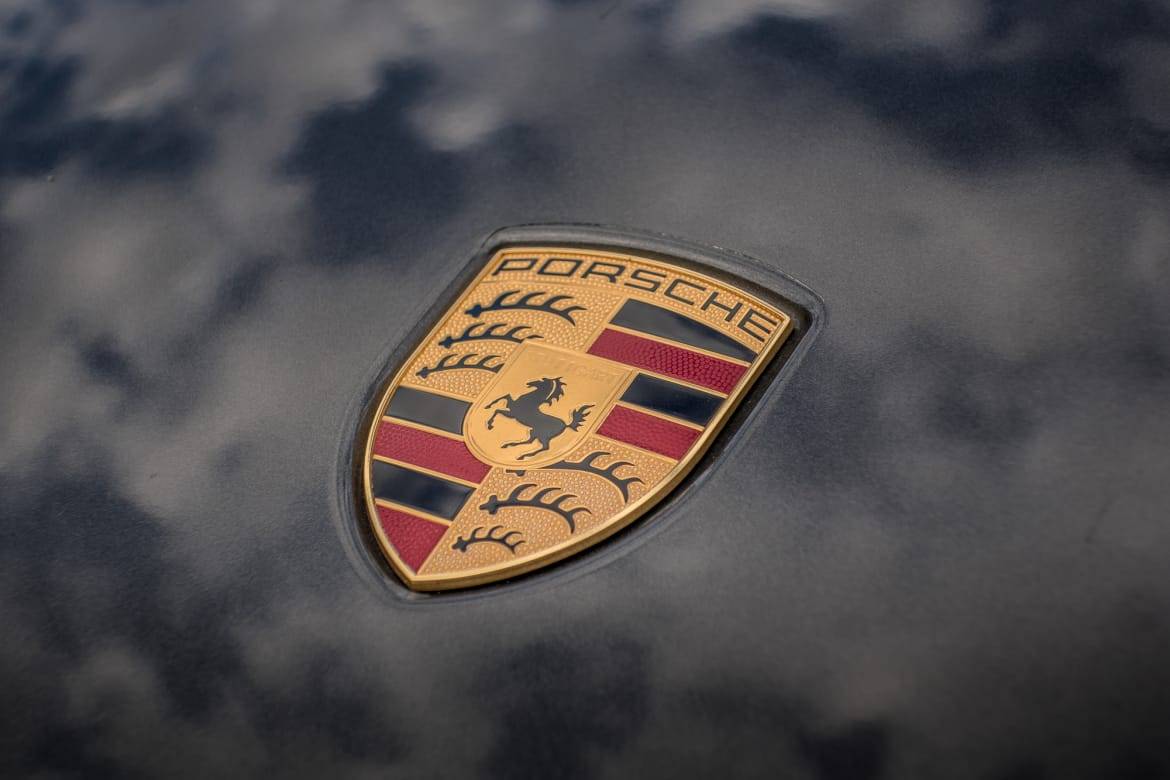 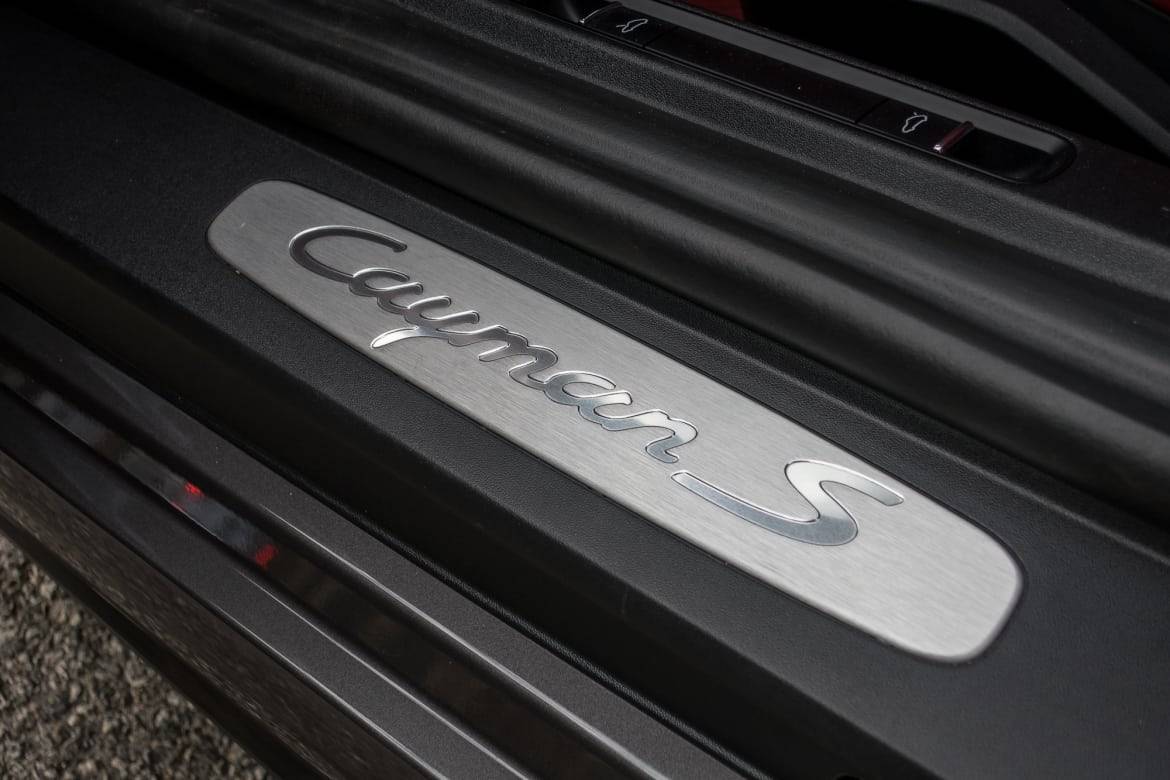 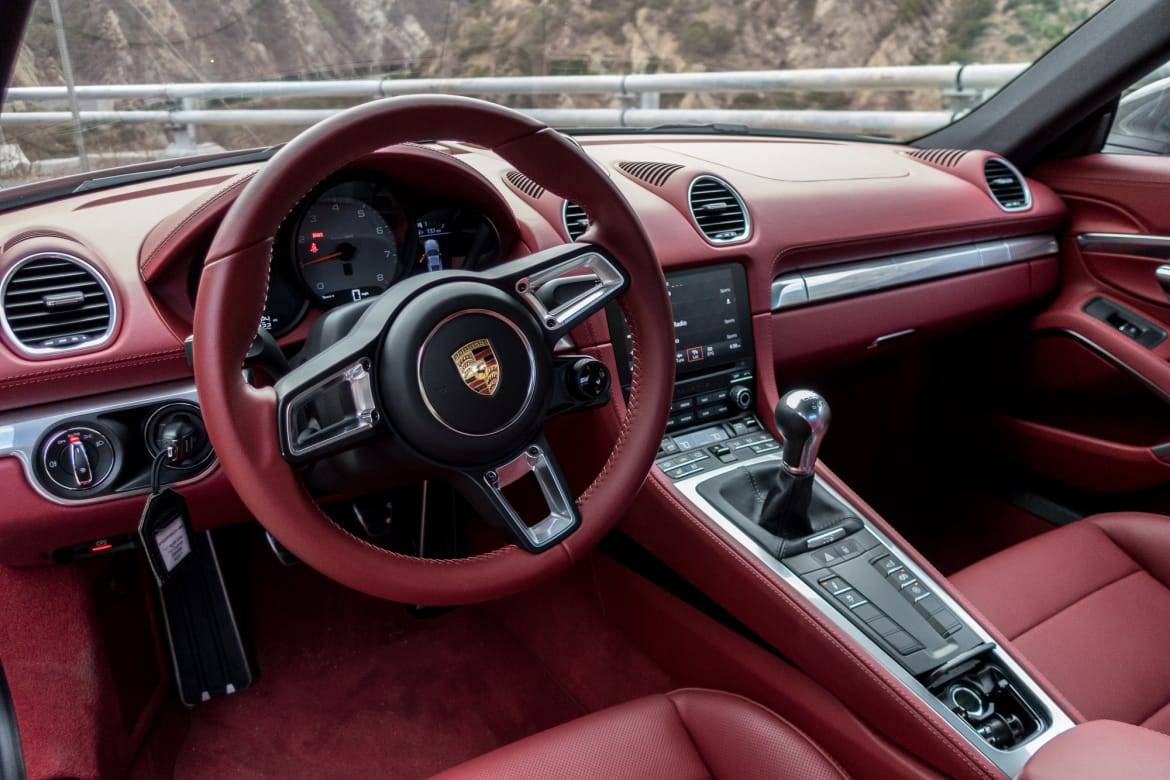 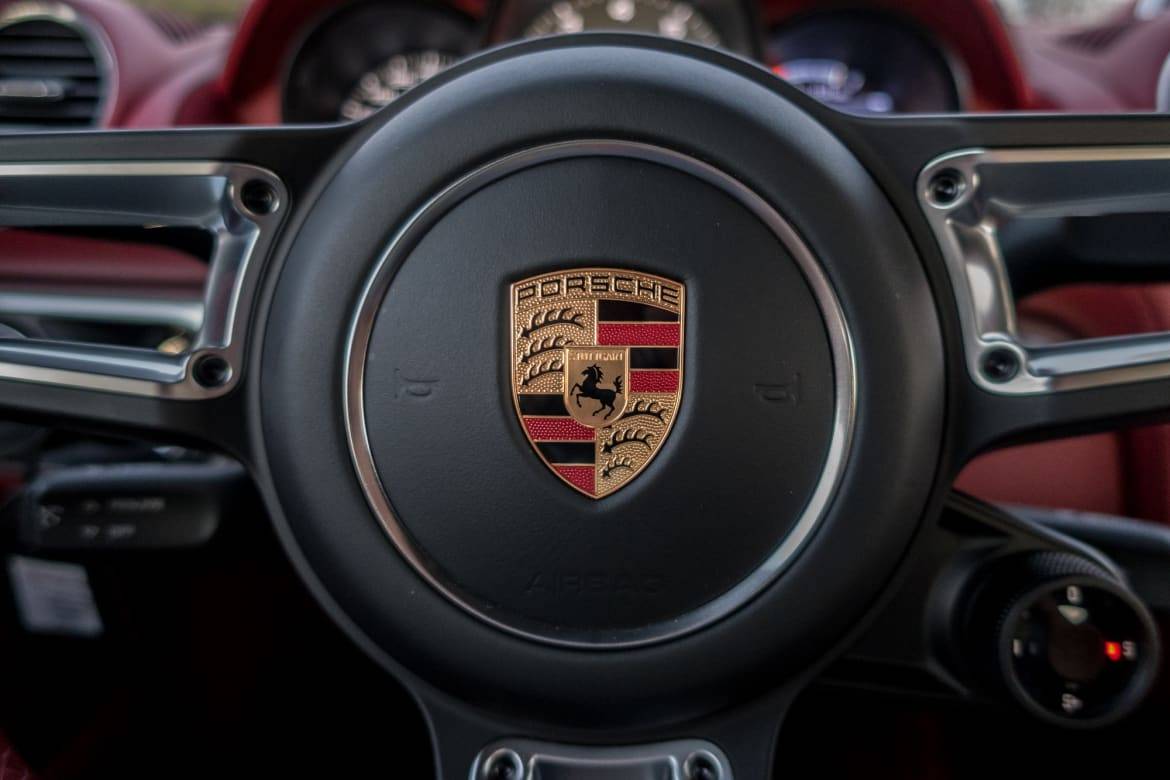 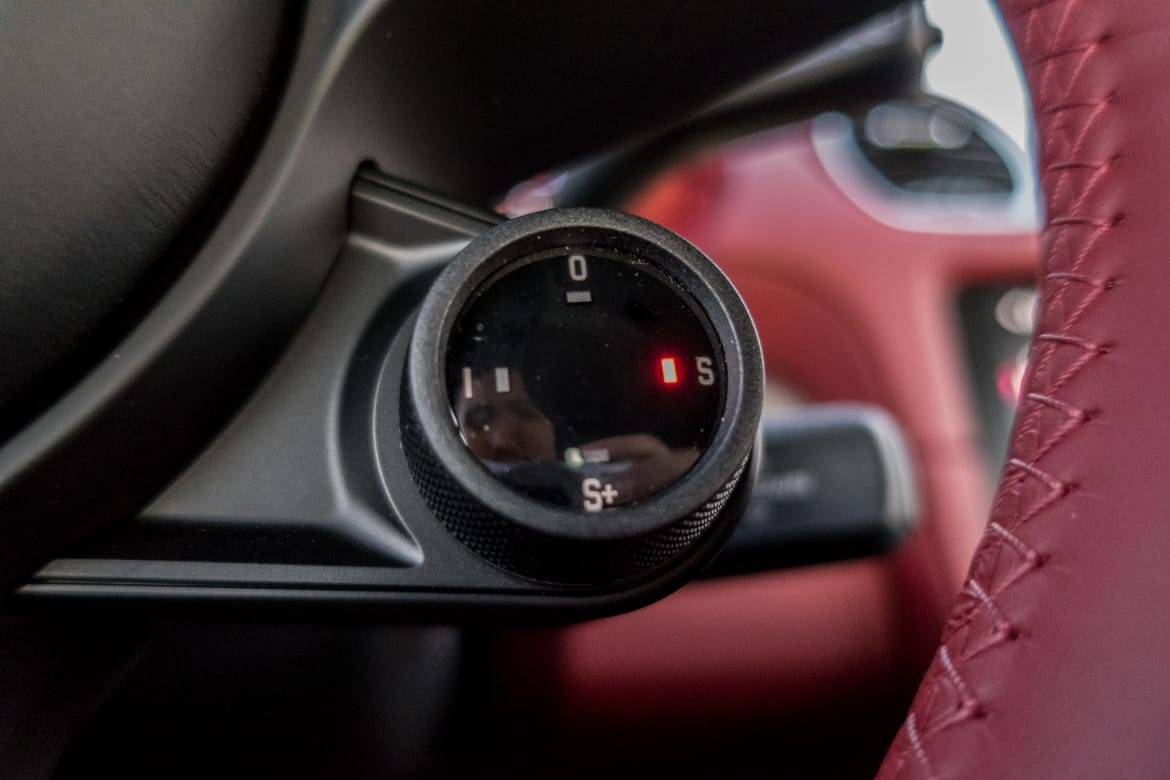 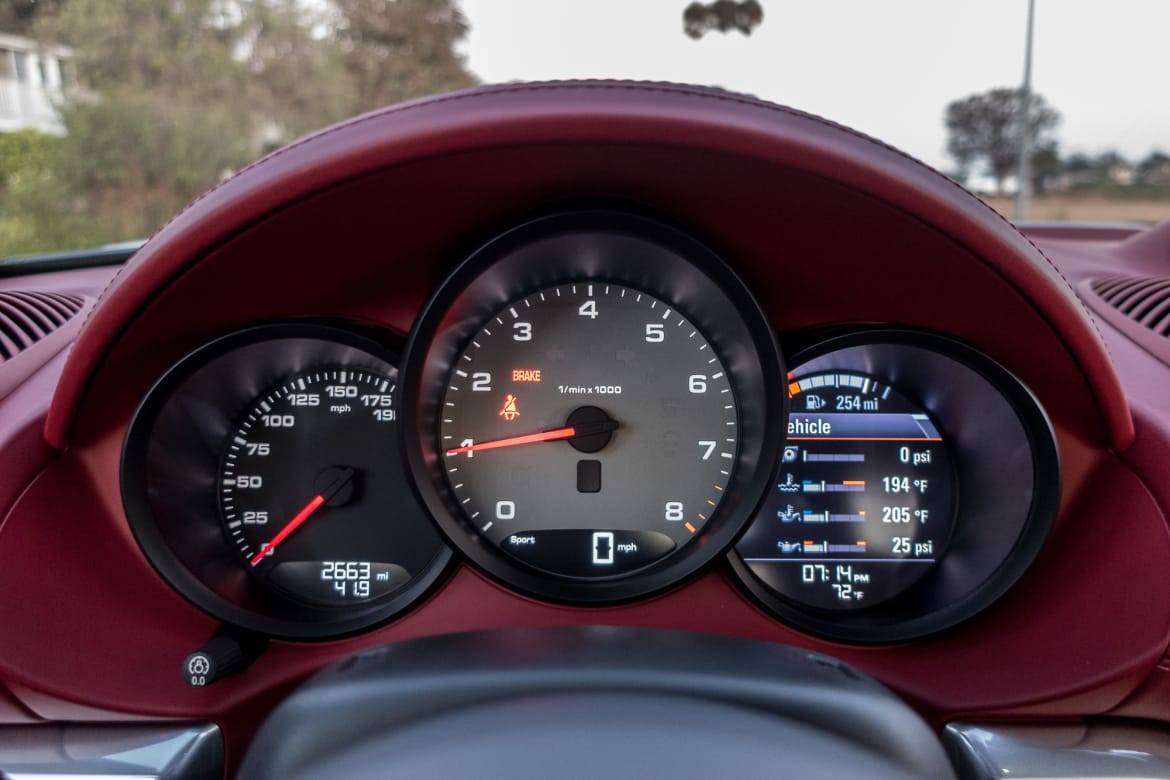 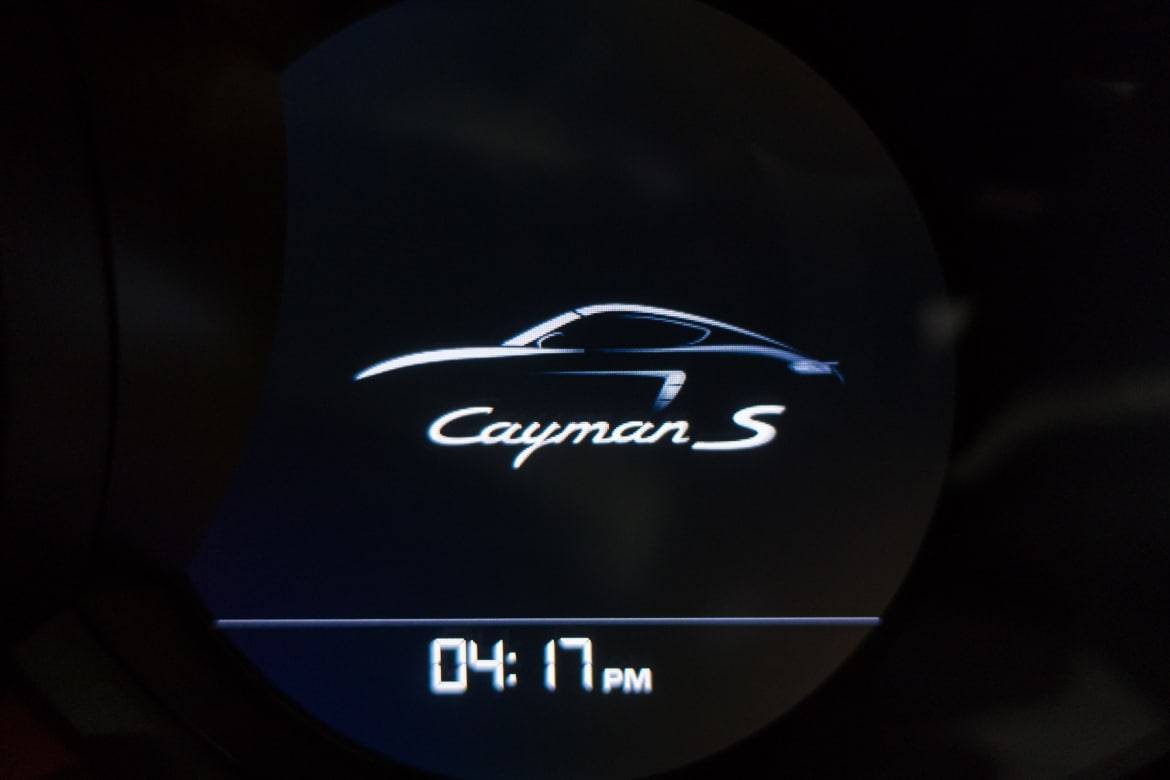 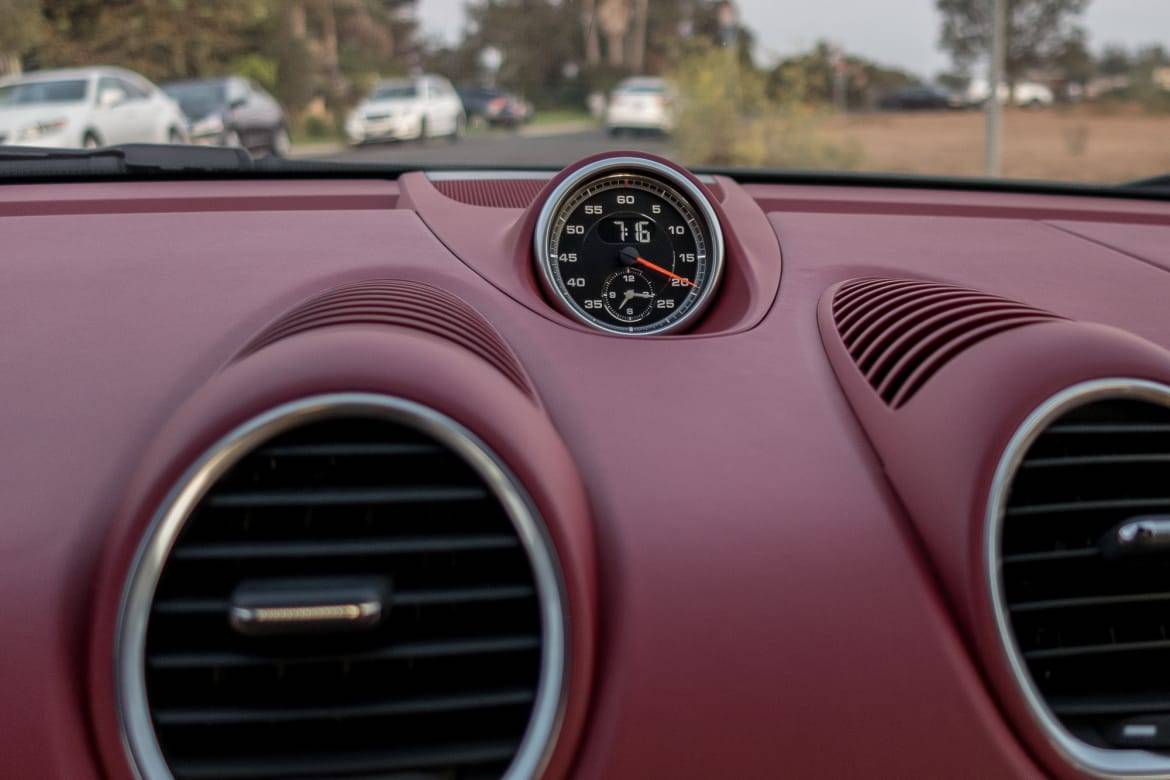 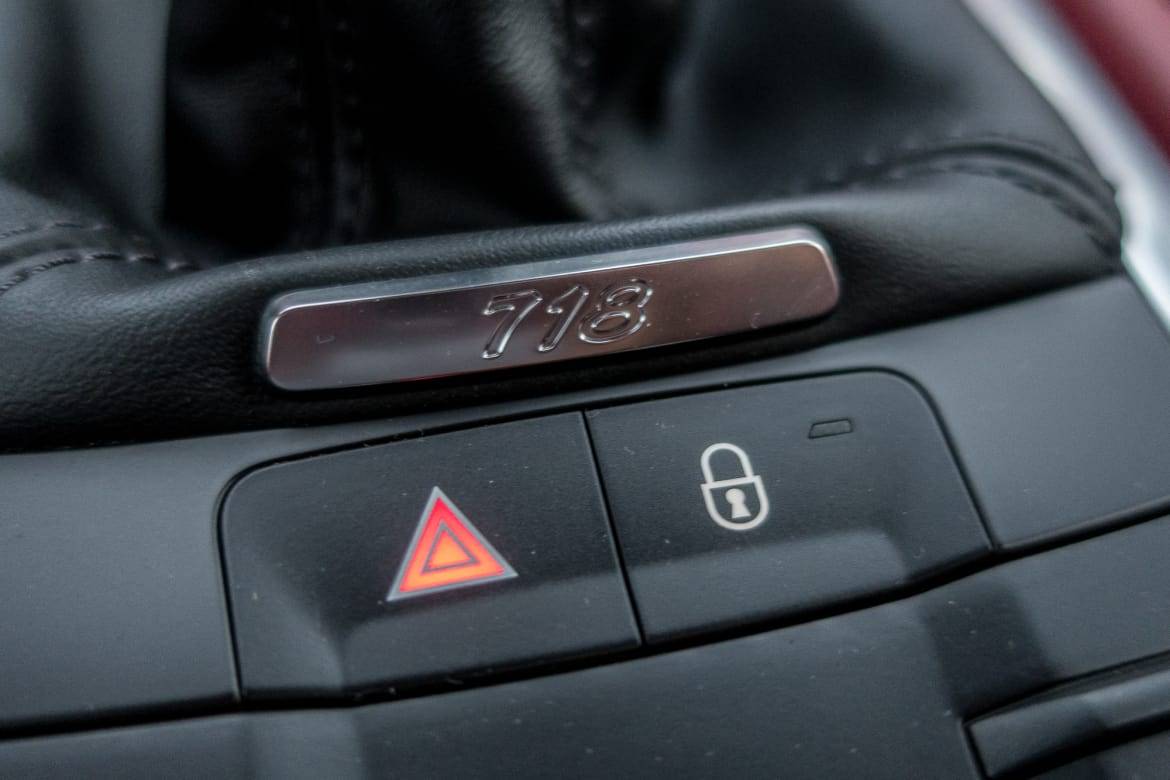 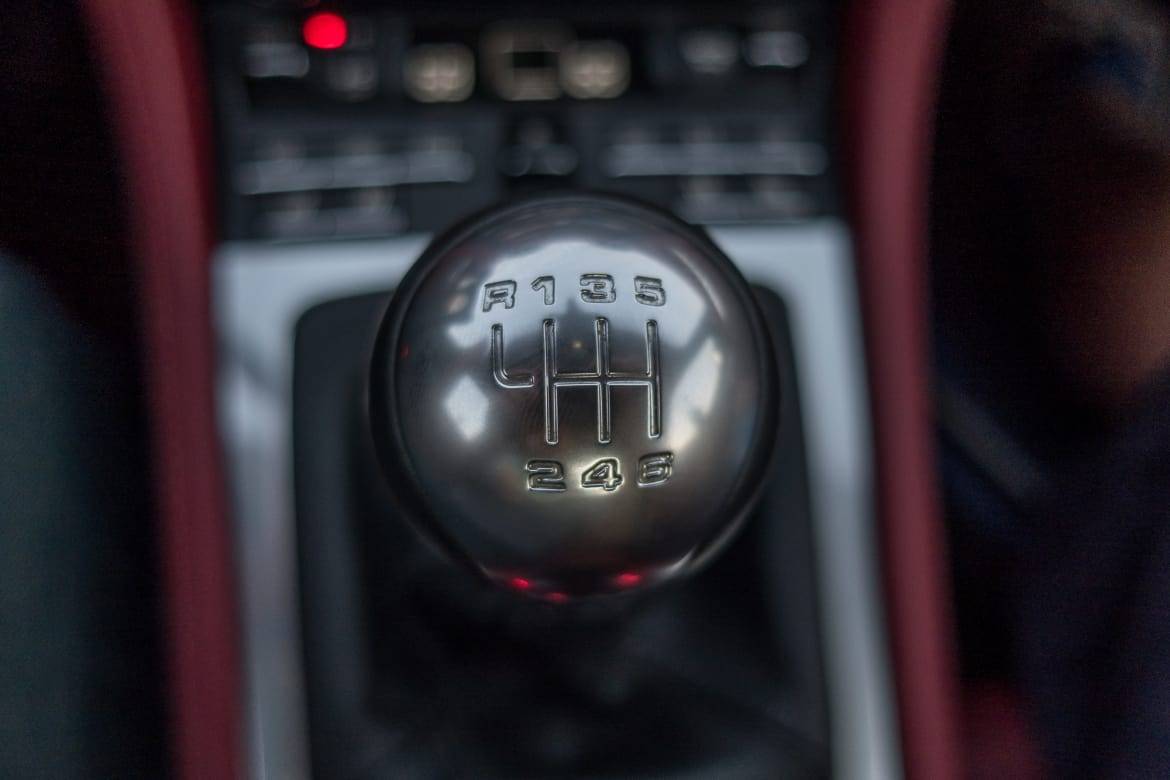 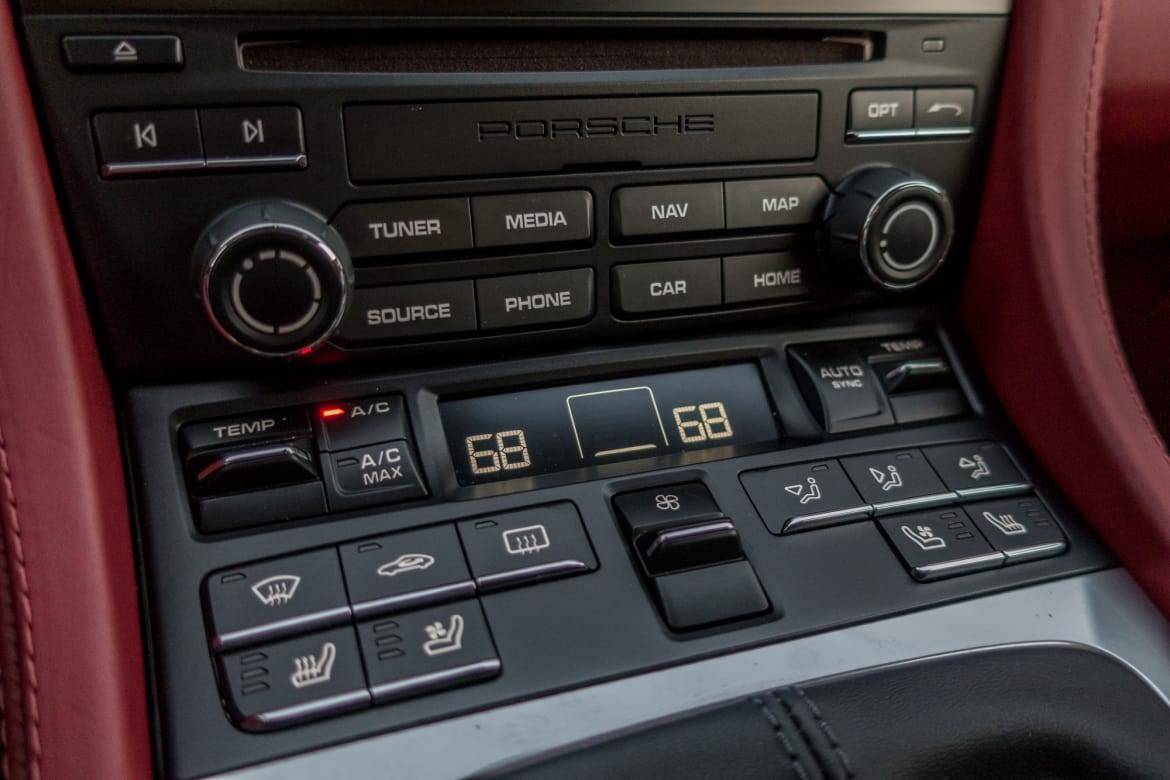 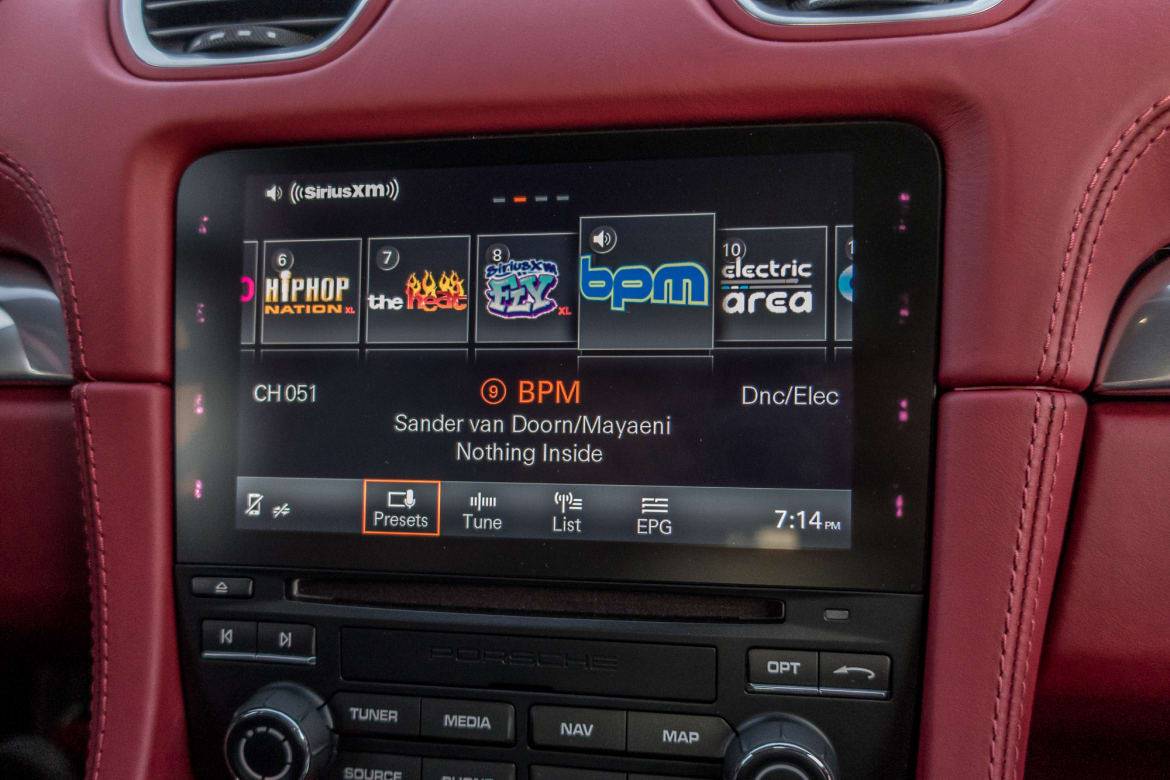 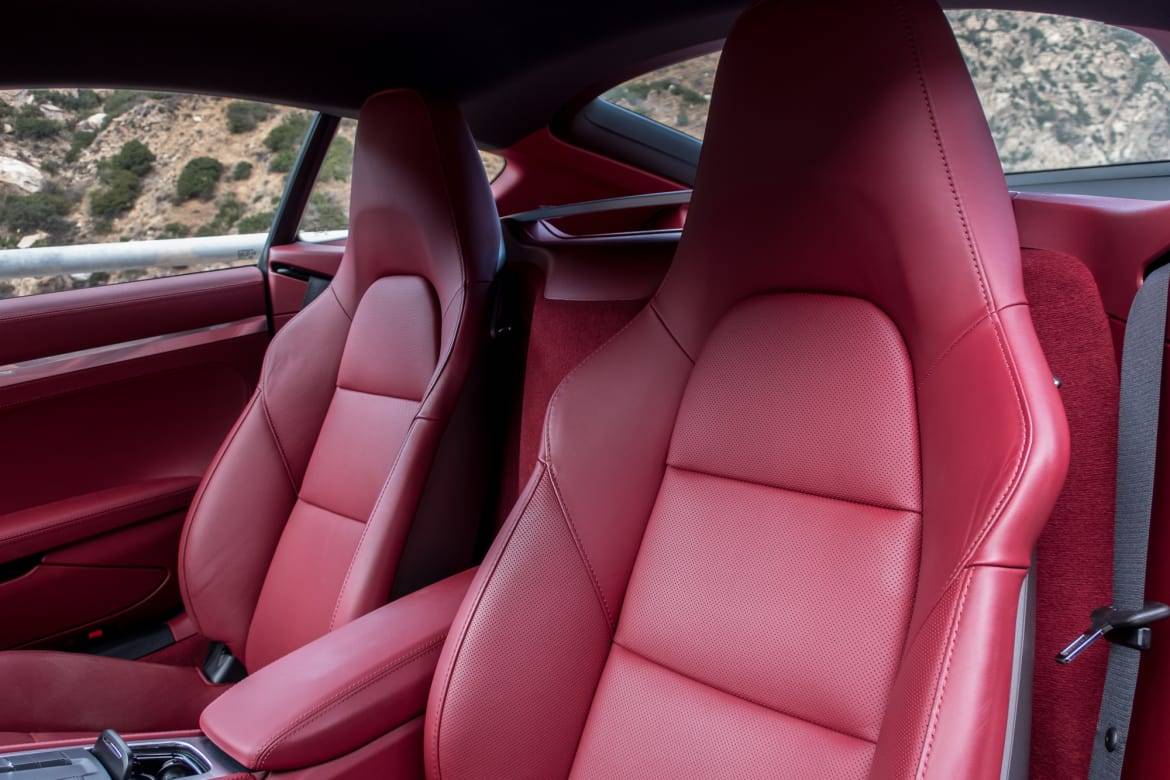 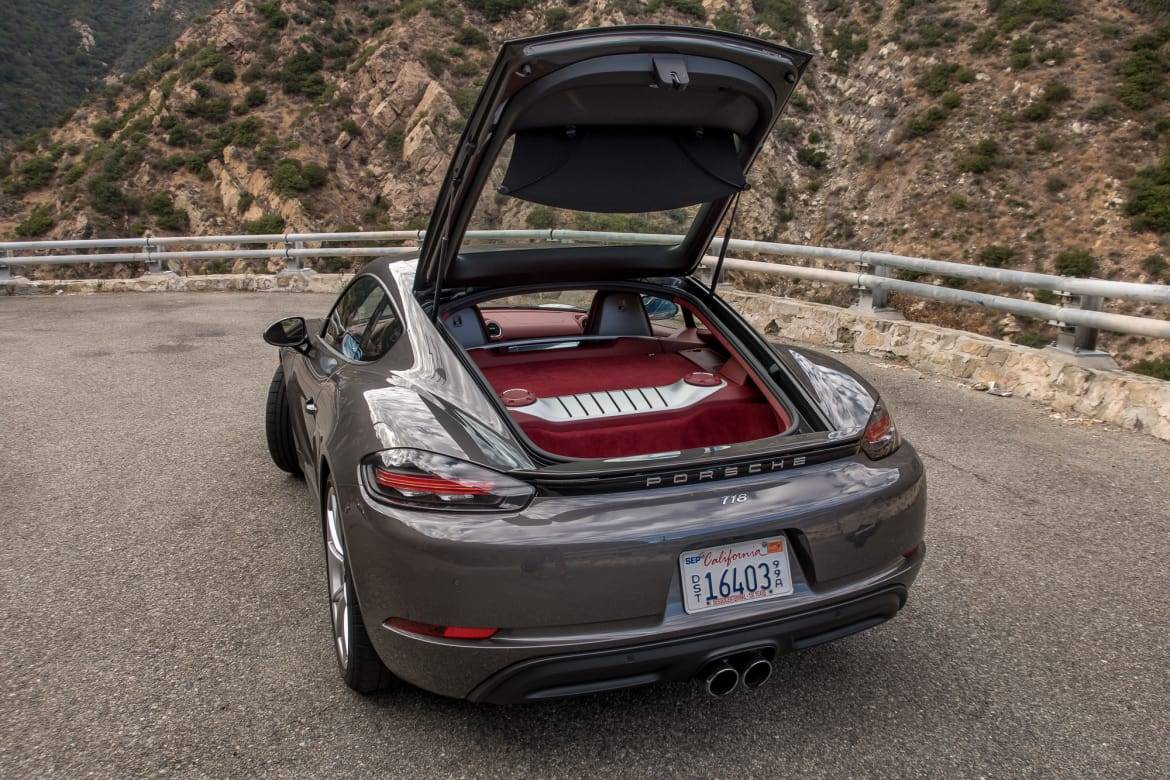 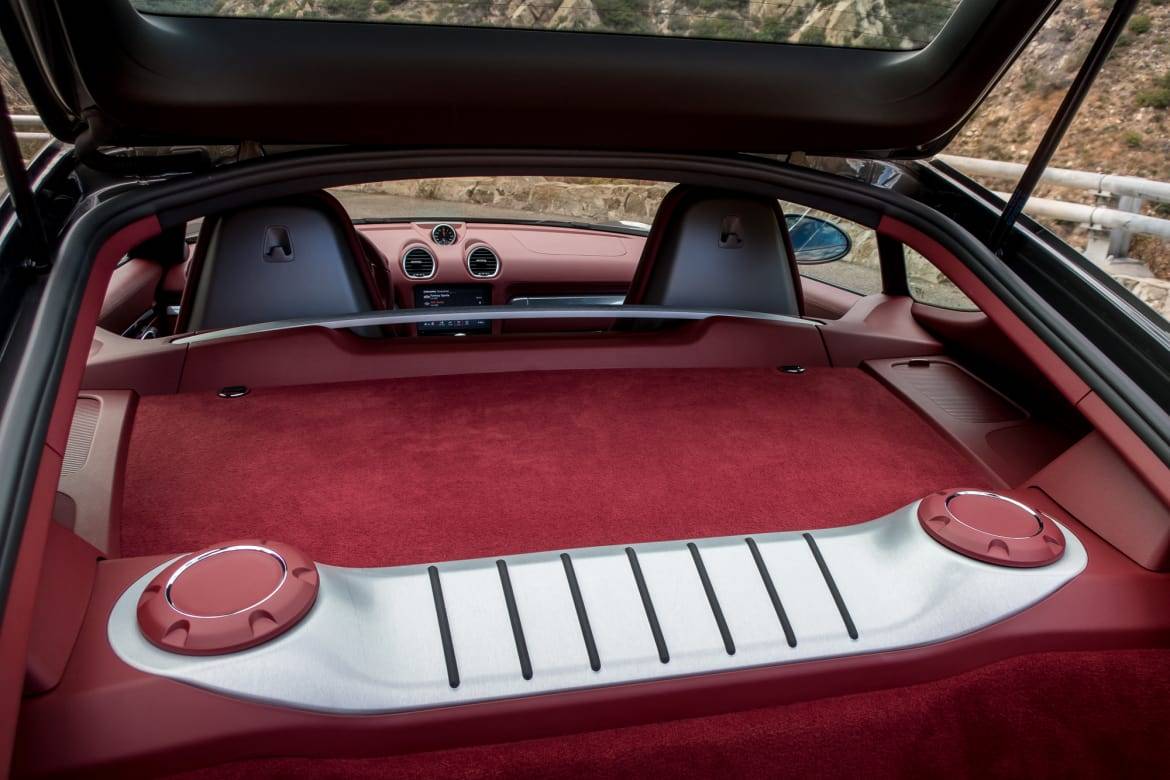 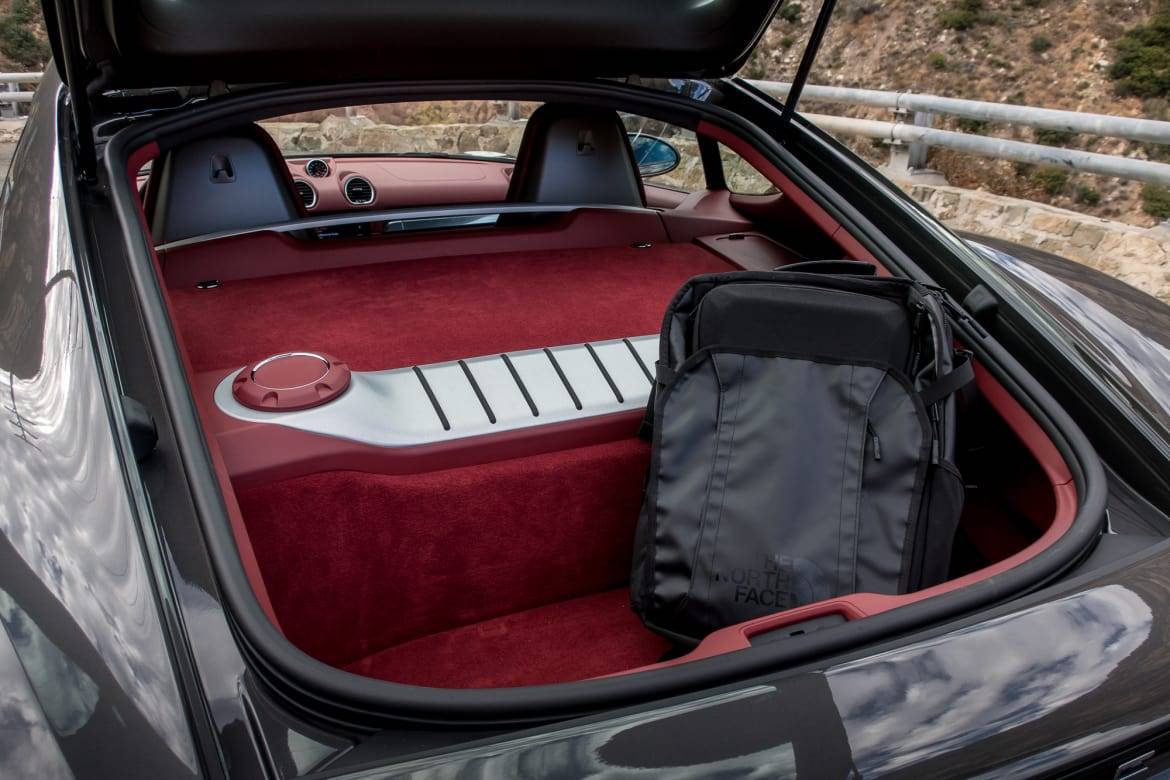 The redesigned 2017 Porsche 718 Cayman two-seat coupe shares virtually all of its updates with the 2017 718 Boxster two-seat convertible I recently reviewed and liked very much. So I had high hopes for the 718 Cayman, as well, and I’m happy to say that it exceeded them. In fact, to me, the 718 Cayman is the best sports car Porsche makes.

Beyond the Boxster, the Porsche Cayman also goes head to head with other luxury sport coupes and convertibles like the Audi TTS and Mercedes-AMG SLC 43. (Compare those vehicles here.)

The most notable updates for the Cayman are a pair of all-new engines. Last year’s horizontally opposed six-cylinder engines are gone, and there are two new turbocharged, horizontally opposed four-cylinders in their place. There are also in-cabin and technology updates, as well as new styling that makes the car appear lower and wider.

I tested a 2017 Porsche 718 Cayman S, the higher trim level, with a six-speed manual transmission. The vehicle has a starting price of $67,350 with destination. Base 718 Cayman models start at $54,950, also with the six-speed manual. Opting for the seven-speed automatic, which Porsche calls PDK, adds an additional $3,210 to either model.

From there, the 718 Cayman S piled on a king’s ransom worth of options. Here are a few key ones:

These options, plus a few smaller ones, brought the total price of our test vehicle to $87,395.

In the Porsche Cayman S I drove, the new engine is a 350-hp, turbocharged 2.5-liter flat four-cylinder that makes 309 pounds-feet of torque — an improvement of 25 hp and 36 pounds-feet of torque. Both the Cayman and Cayman S are rear-wheel drive and offer the same transmission options, mentioned above. The big advantage I found from the new engines (I tested the base engine in the 718 Boxster) is that they’re responsive in the mid- to low-rpm range. Contrary to turbocharging history, the turbos have a big advantage over the normally aspirated version here, making the Cayman better and sharper than before.

Three of the key options found on our Cayman S were directly tied to its performance. The first, Sport Chrono, adds a drive mode selector to the steering wheel with four different options: Normal, Sport, Sport Plus and a customizable Individual setting. With PDK, Sport Chrono also adds launch control, while it offers rev-matching downshifts with the six-speed manual in Sport and Sport Plus modes.

This makes the manual, which was already a joy to operate, even more grin-inducing. It has a consistent, linear clutch action and well-defined gates that offer a satisfying mechanical click when the stick pops into gear. The rev-matching feature makes the whole car run smoother, and it makes you feel like a better driver than you actually are. The same thing could be said about the Cayman’s handling.

Ahead of the Curve

If Sport Chrono’s focus is on the throttle and transmission, then Porsche Torque Vectoring and Porsche Active Suspension Management are more focused on the handling aspect of the equation. PTV works in concert with the rear axle’s mechanical differential lock to brake the inside rear wheel when cornering at high speed, shifting more power to the outside wheel. This improves turn-in, as the outside wheel essentially helps steer the car into the turn; combined with an updated steering system lifted from the 911 Turbo, it makes the whole car feel more responsive and agile. And electro-mechanical though the steering may be, it still offers plenty of feedback; it’s the best iteration of one of these systems I’ve driven to date.

Also helping the Porsche 718 Cayman’s handling acumen, PASM lowers its ride height by 0.39 inch in the base and 0.78 inch in the S, plus it adds adaptive shock absorbers with two driver-selectable suspension settings: Normal and Sport. In Normal mode, the ride is pliant and comfortable, removing chatter from blemished roads and keeping things smooth. But Sport is where the real fun is, stiffening up the shocks — which, yes, makes the cabin noisier and can jostle you a bit on rough roads, but the trade-offs are worth it when you round that first corner.

The Cayman S is impeccably balanced; its mid-engine layout and lowered ride height make it feel as though it’s glued to the ground. There’s a very winding road I like to use to test vehicle handling — it’s  downhill, with a lot of switchbacks and undulations that normally unsettle cars. The 718 Cayman S is the first car I’ve driven down that road that ate it up without any drama and nary a squealing tire. It was markedly better than even the 718 Boxster I took there a few weeks earlier; that car felt like it was close to stepping out at times, but the 718 Cayman S took the same corners with verve.

The 2017 718 Cayman S gets interior updates that include new material choices and a new 7-inch touchscreen with an updated multimedia system. Porsche Connect Plus adds smartphone connectivity features via a downloadable app, as well as Apple CarPlay. Android Auto, however, is conspicuously absent.

There are a few features in the 718 Cayman’s interior that give it a leg up on the 718 Boxster. First, it has much better visibility than the Boxster with its top up. The Boxster’s soft-top makes for massive blind spots on both sides, and it has a much smaller rear window because it has to fold down and fit where the roof is stored. But the Porsche Cayman has a large rear trunk opening, almost like a hatchback, with big rear glass and smaller C-pillars that make for a much better view of the Cayman’s surroundings.

Not having to store the roof also opens up more cargo space. The Cayman’s rear cargo area is about the same size as the Boxster’s, but there’s a nice shelf on which objects can be stored; I kept a camera tripod and jacket on that shelf most of the week. This gives the Porsche Cayman 9.7 cubic feet of cargo space in the rear (versus 4.4 cubic feet in the Boxster) to go along with 5.3 cubic feet in its front trunk.

It’s worth noting that this larger rear cargo area still won’t fit a large suitcase; anything larger than a carry-on will have to fit up front. Nor will it really fit a bag of golf clubs. Those have to sit in the passenger seat — which could be a curse or a blessing depending on how you look at it.

There are many reasons not to buy a two-seat sports car that costs almost $90,000. It’s not at all practical, and even at such a high price, it’s missing a lot of advanced safety technology. You can only fit one friend in it, and the two of you might have to share a suitcase for the weekend. But, my goodness, drive it hard on a summer day and all of a sudden it becomes abundantly clear why someone might pony up that much cash for a Porsche 718 Cayman S.

What’s most interesting to me is that the starting price for a 2017 911 Carrera, $90,450, is just a hair over $3,000 more than my well-equipped test car’s price. But even though the 911 Carrera has more power and pedigree, I think I prefer the 718 Cayman S. It’s the more balanced car, and the way it stays absolutely nailed to the pavement when pushed is exhilarating.

This is a very successful redesign of the Porsche 718 Cayman S. The long list of updates to the mid-engine sports car for 2017 make it feel, as Daft Punk would say, “harder, better, faster, stronger.”