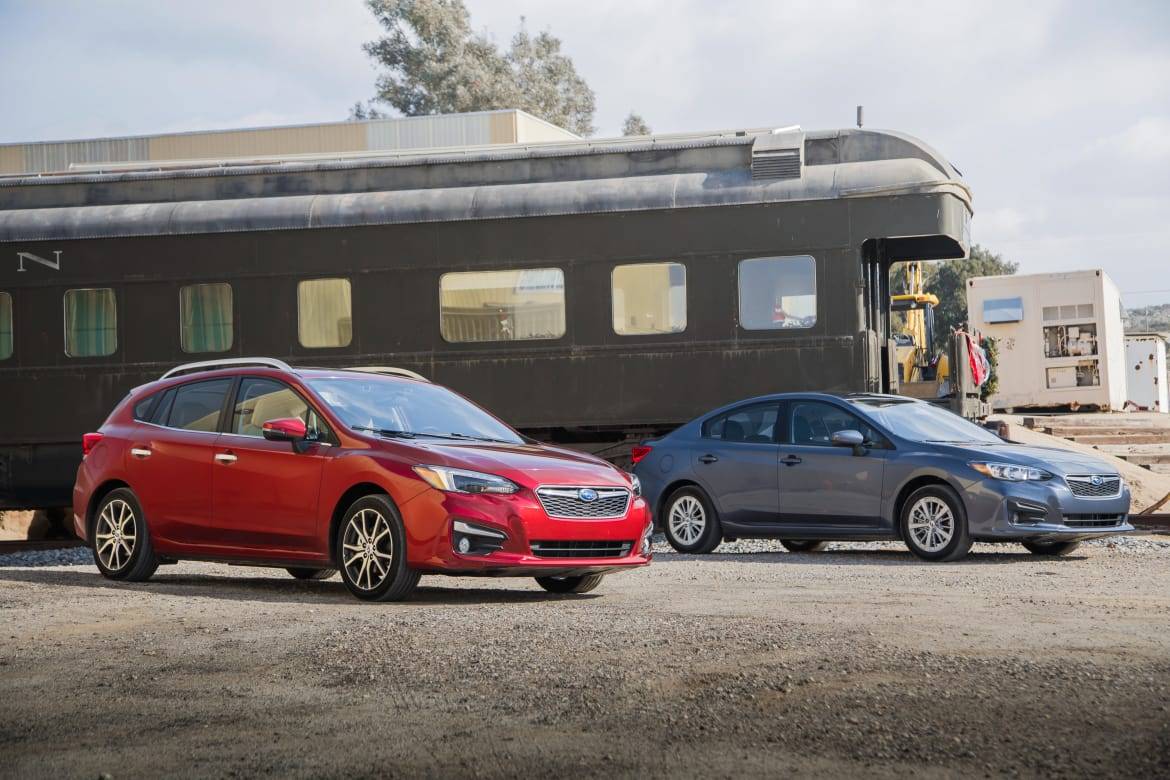 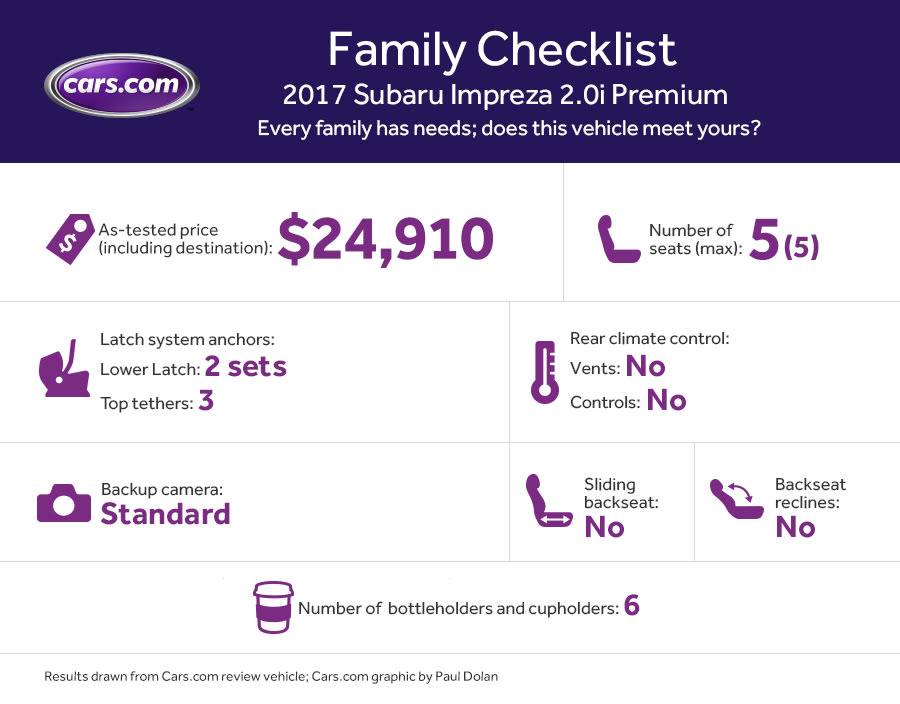 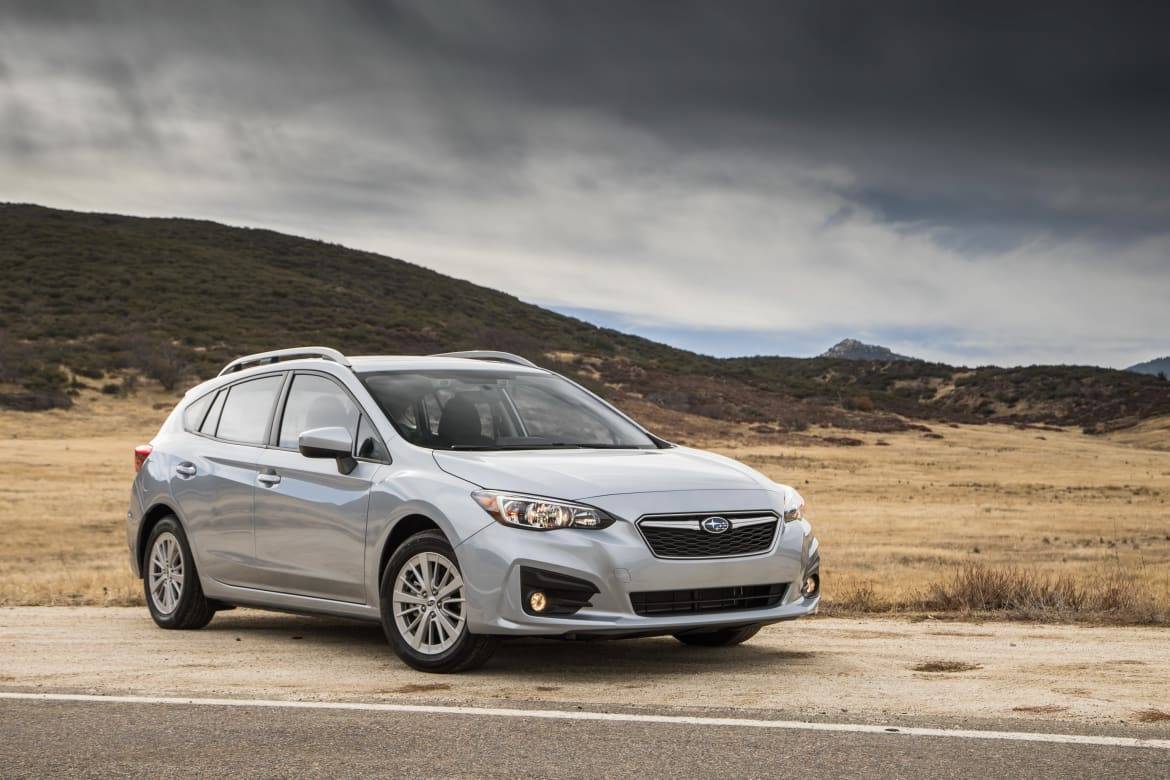 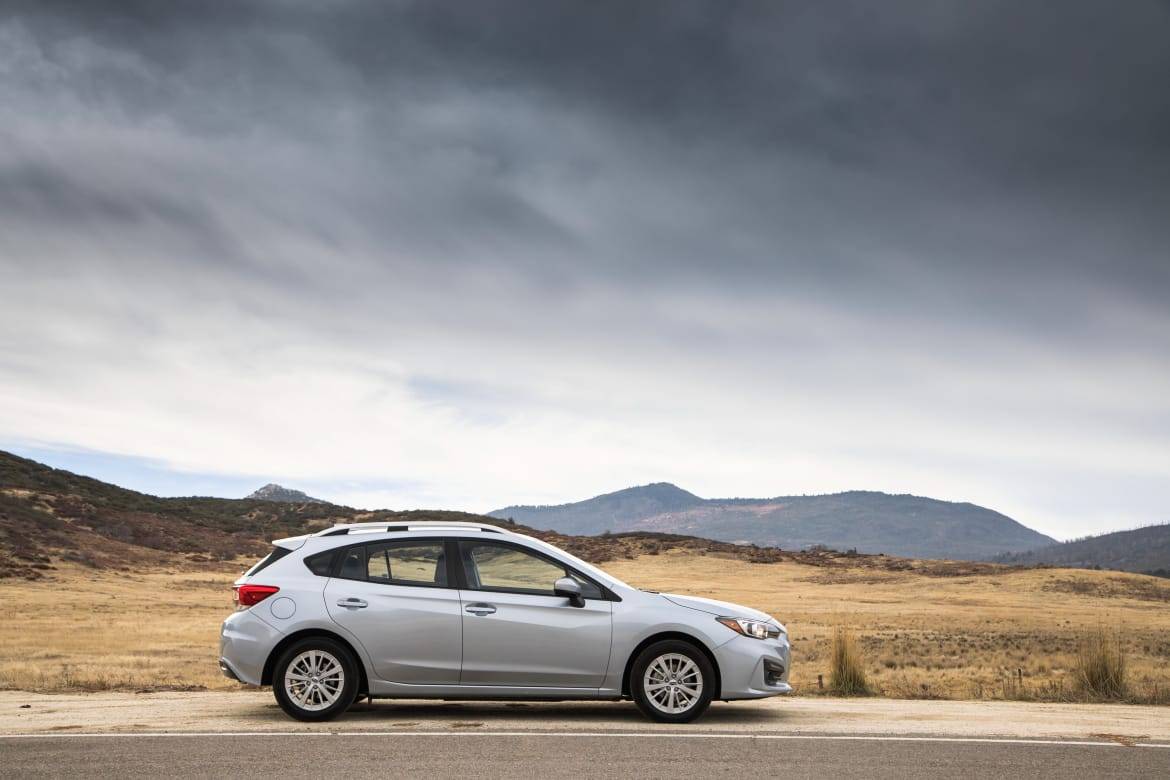 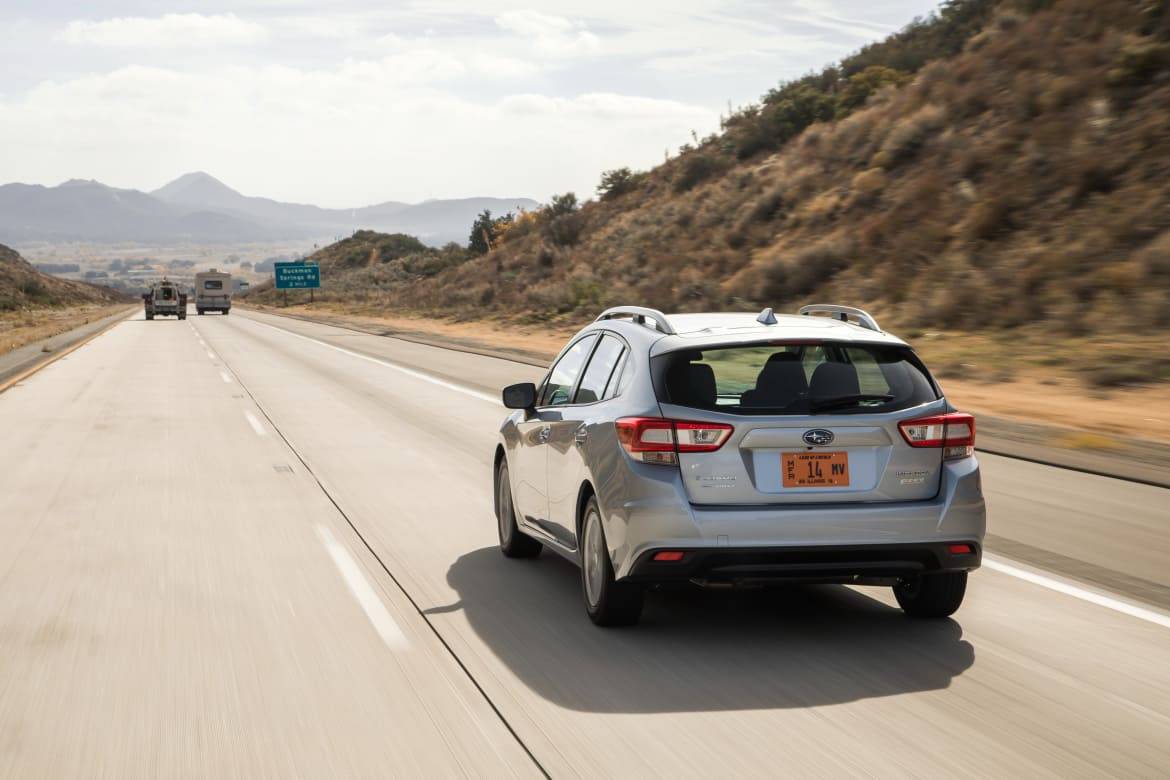 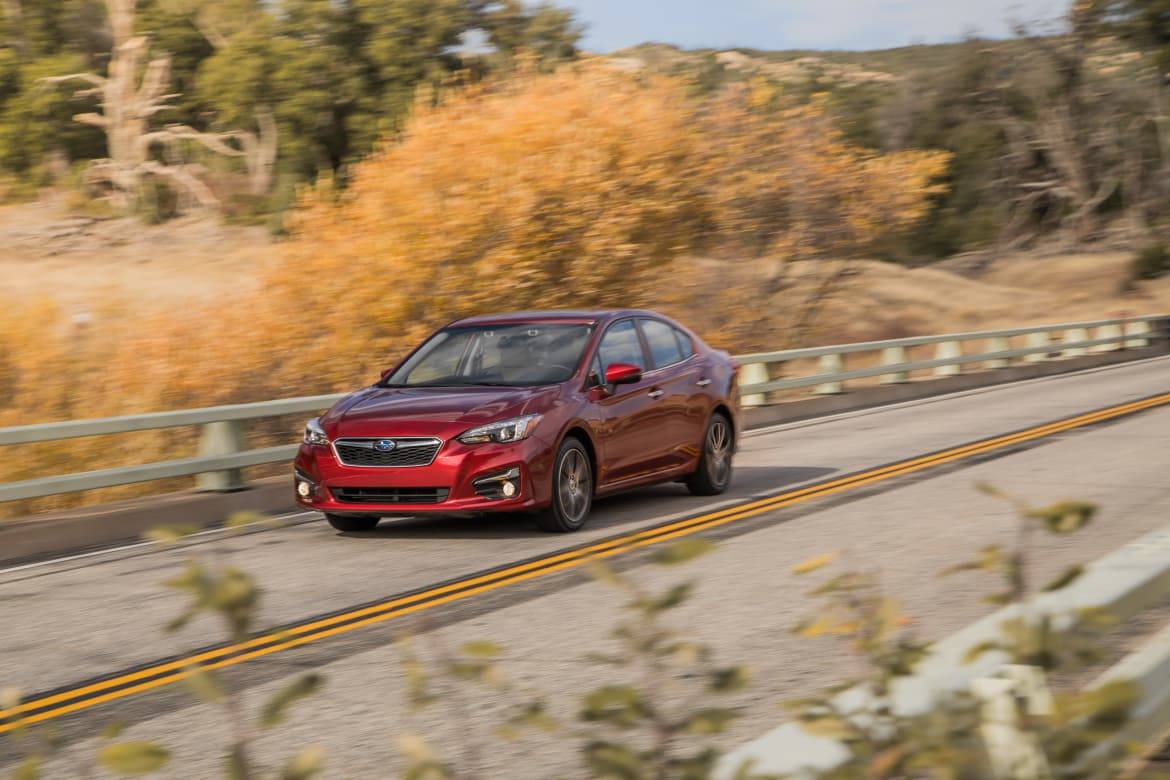 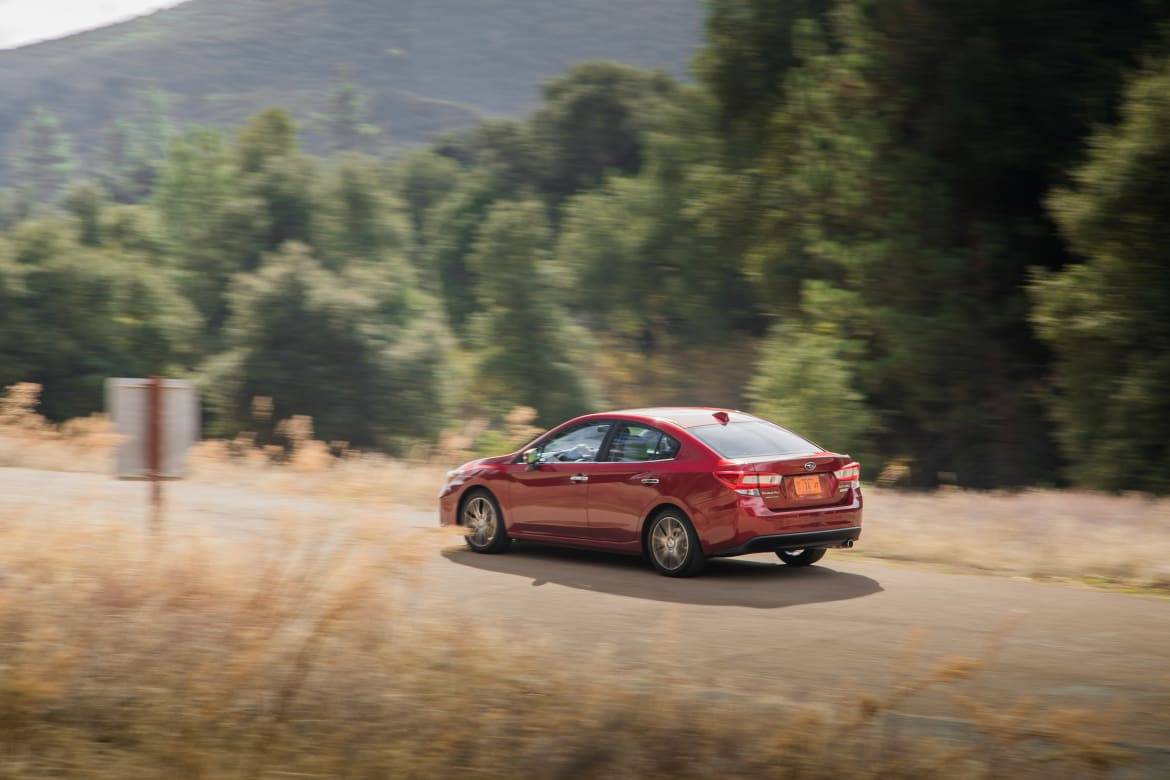 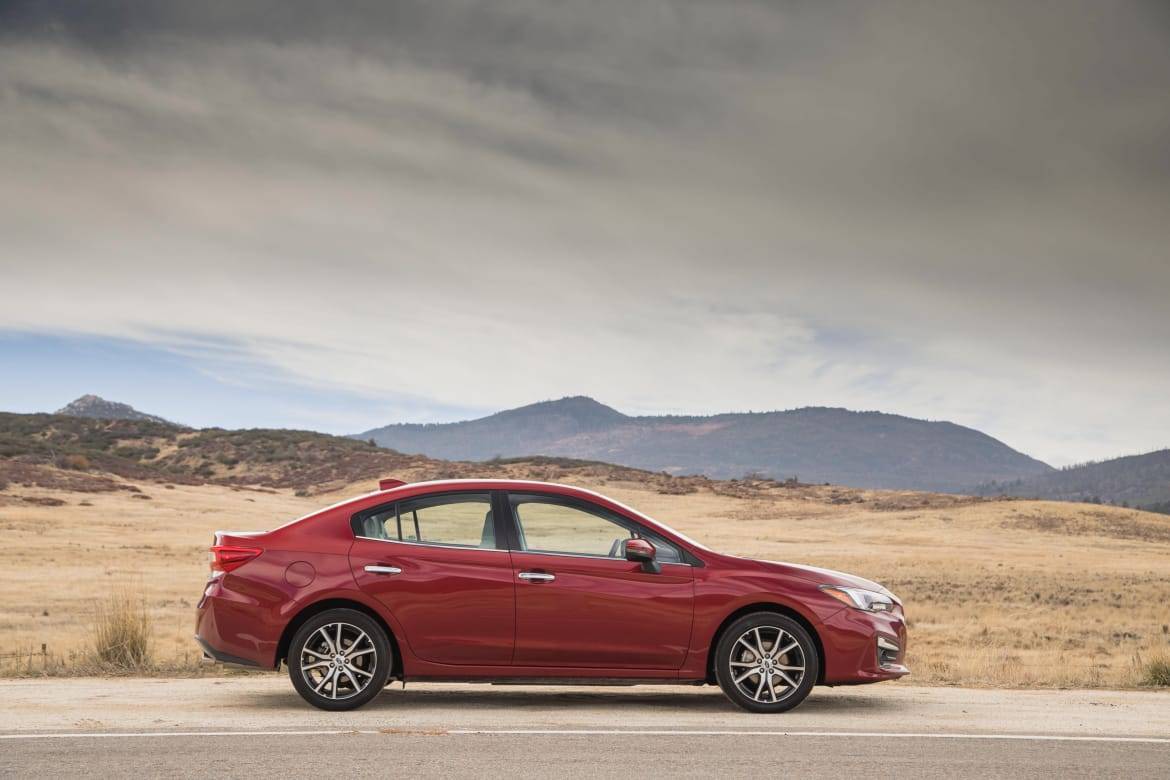 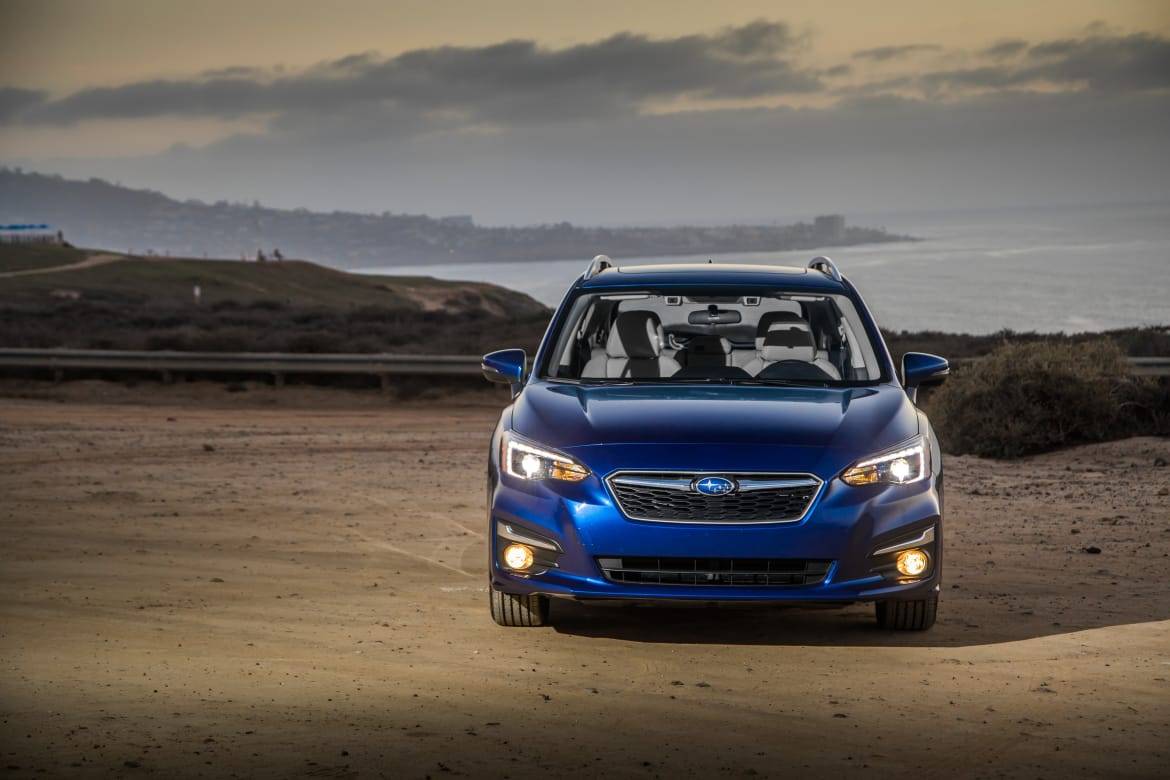 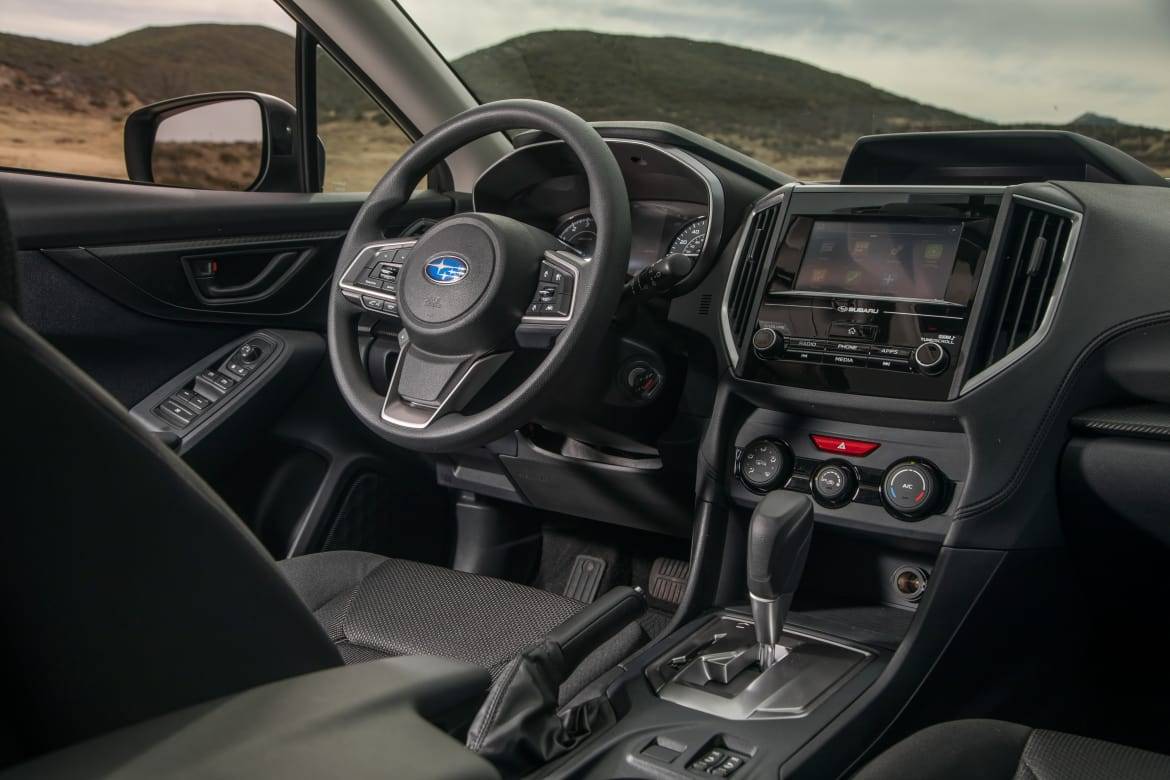 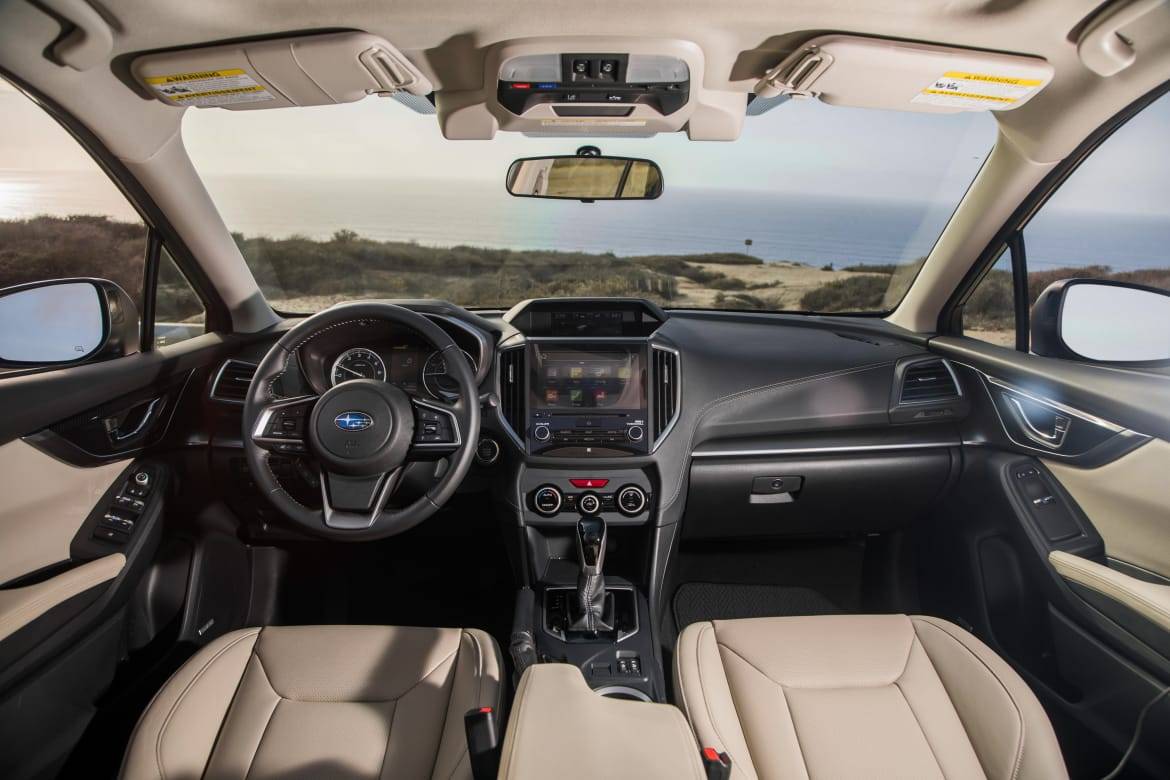 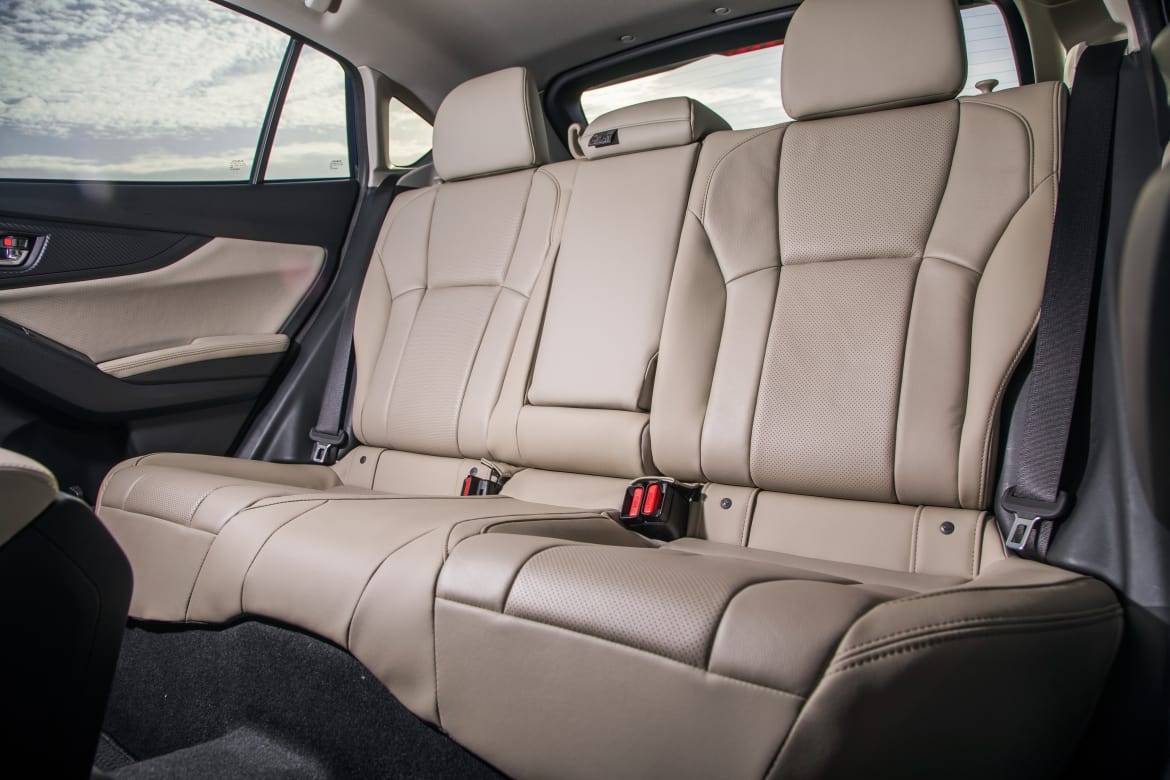 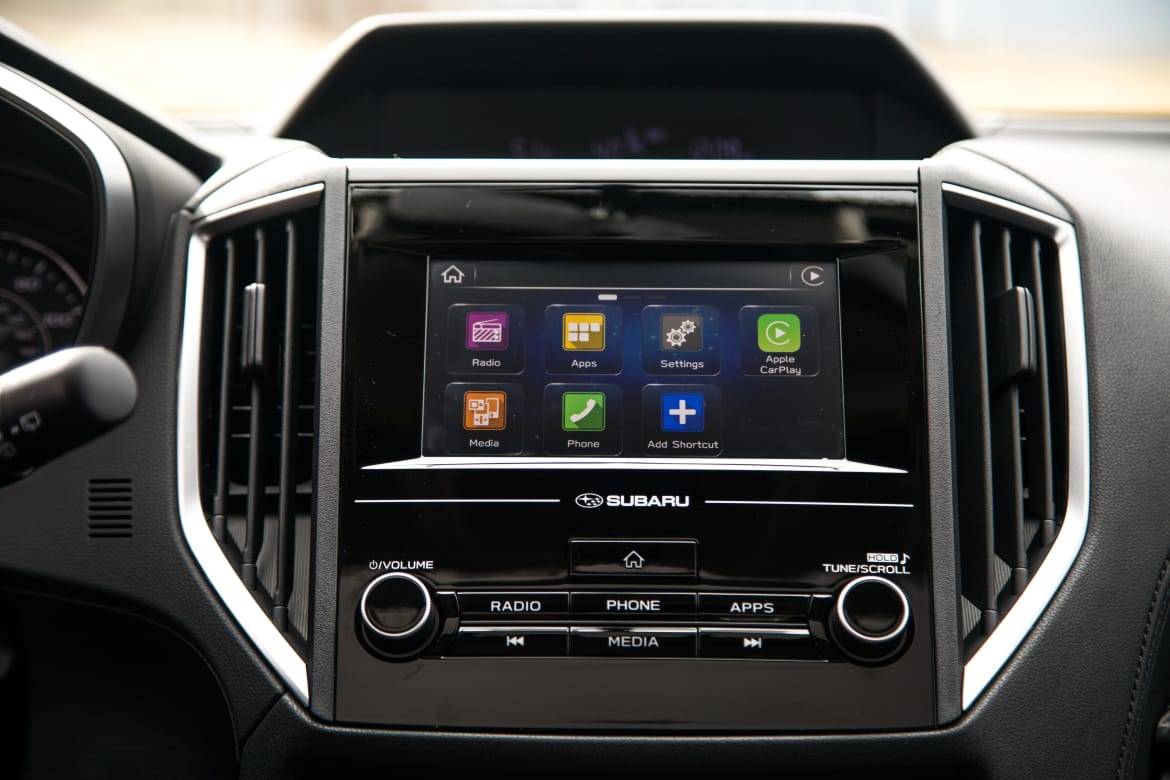 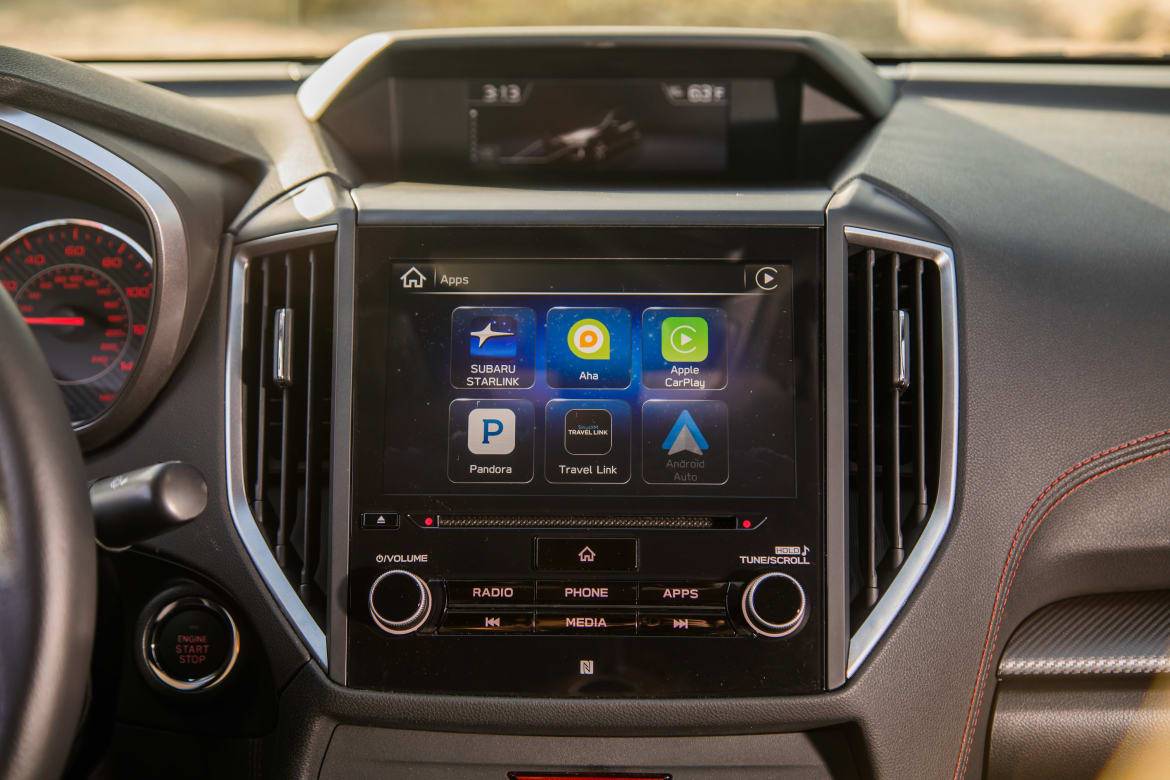 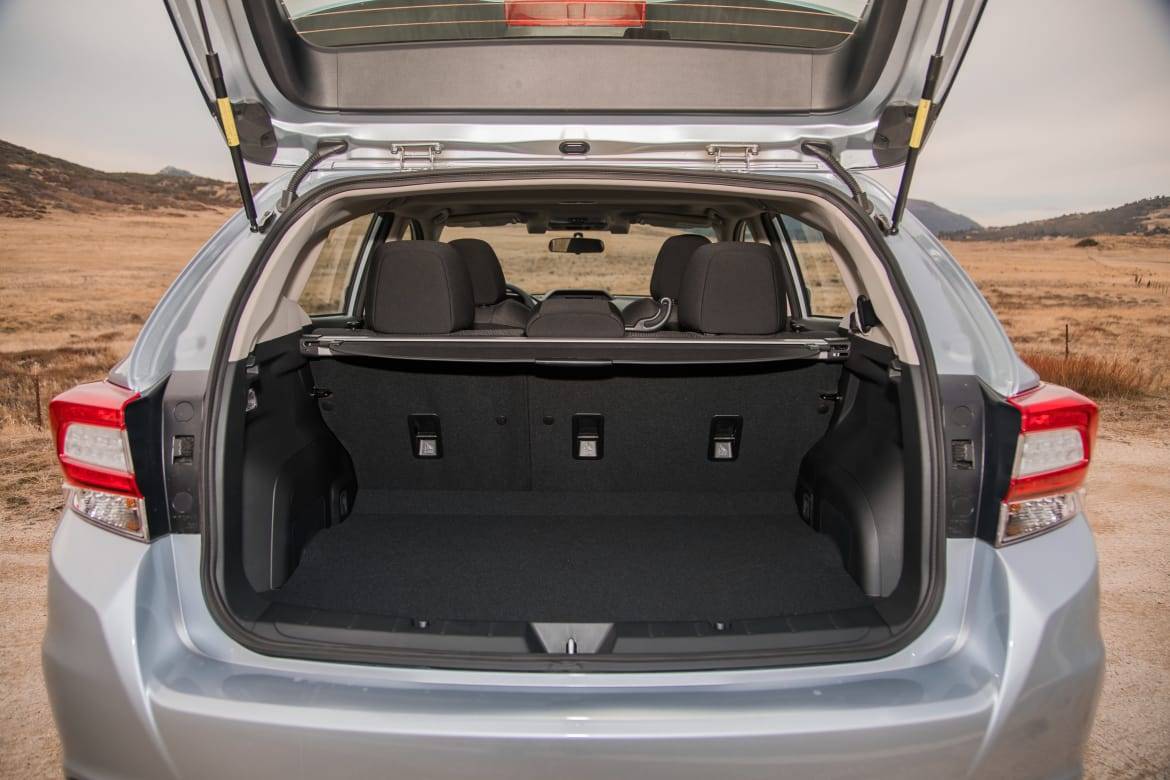 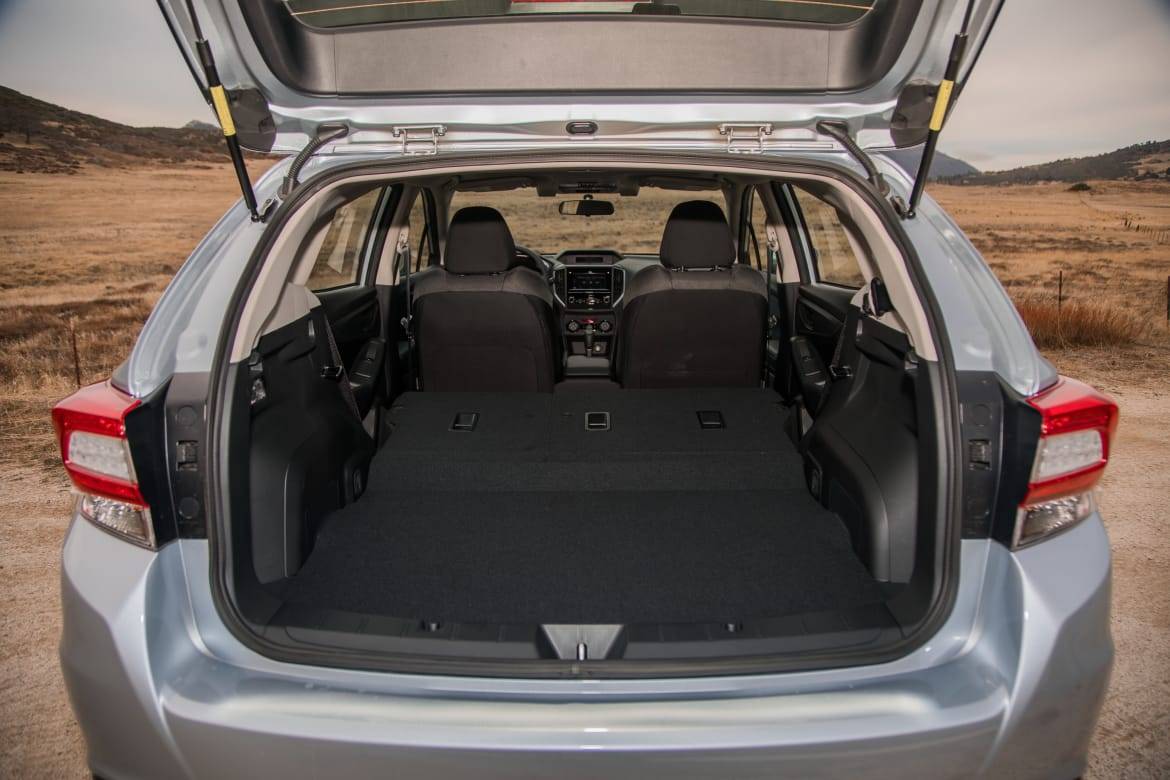 The 2017 Impreza is a significant redesign for Subaru. Not only is it the first Impreza built in the U.S. (in Indiana), it’s also the first to ride on Subaru’s new Global Platform, which will eventually be used throughout the lineup. The new model still comes in sedan and hatchback versions, but both have grown about 1.6 inches longer for 2017.

The previous Subaru Impreza’s styling emitted an air of economy, but the new model sheds that dullness with a look that’s much more upscale and expressive. And though it’s not as evocative as the concept version that debuted in 2015, the production model doesn’t disappoint.

Its wider, lower stance adds a sporty flair, and several distinctive cues have carried over from the concept, including a strong bodyside character line, muscular wheel arches, a larger grille and hook-like LED headlights. Instead of blending into the class, it holds its own solidly next to the Honda Civic’s crisp lines and sharp angles and the Hyundai Elantra’s sweeping, classy curves.

The Impreza’s comfort and driving dynamics impress. Bumps are well-damped, and it handles well, with reactive steering, a planted feel at highway speeds and flat cornering. Aside from the CVT drone, it’s pleasant on long trips.

All-wheel drive is again standard on both the hatch and the sedan, and mileage is similar to the outgoing model. The five-door hatchback with the CVT is EPA-rated 28/37/31 mpg city/highway/combined, lower fuel economy than the automatic Cruze (29/38/32 mpg), the Civic hatch with a CVT (31/40/34 mpg) and the automatic Mazda3 hatch (28/37/31 mpg). The sedan’s fuel economy numbers tell a similar story. With an EPA rating of 28/38/32 mpg, it trails base automatic versions of the Civic sedan and Hyundai Elantra by a couple of mpg, and it nearly matches the Corolla’s mileage.

The Premium model’s name is deceiving. It’s a step up from the base model but feels very base inside. Hard plastic lines the cabin, though surfaces are padded in key areas, such as the door armrest. What’s chintziest is the unconvincing faux metal along the dashboard and plastic that’s painted to look like metal near the gear selector. Not fooling anyone.

The Limited’s cabin, however, befits its spot at the top of the lineup. Its leather seats and surfaces feel high-end, as does the detail stitching on the dash. It still wears faux-metal plastic paneling, but it looks and feels more believable here. Both models have wider, more bolstered seats than the outgoing car, and they provide long-drive comfort.

The new Subaru Impreza is the first vehicle to use Subaru’s next-generation multimedia system. All trim levels offer a standard touchscreen with Apple CarPlay and Android Auto integration; I tested the 6.5-inch screen in the Premium and the 8-inch unit in the Limited. Both are straightforward, with a logical menu structure, clear home button, and large tuning and volume knobs. It looks fresh, too, with crisp resolution and modern-looking graphics.

A backup camera is standard. In terms of active safety features, the Impreza is among the more advanced cars in the compact lineup thanks to an optional EyeSight collision avoidance system that’s available on all models except the base version. Newly available safety features include a cruise control that is adaptive, lane-keeping assist, backup automatic braking system and steering-responsive headlights that swivel as the car turns. An automatic high-beam system joins EyeSight on Limited models; the system automatically turns the high beams on and off based on driving conditions. Subaru’s subscription-based Starlink Safety and Connected Services system returns, as well.

Value is often a high priority for compact-car shoppers, and the Subaru Impreza delivers big there. Prices are up only slightly this year; the hatchback starts at $19,715 (all prices include destination). Similar body-type competitors such as the Mazda3 hatchback ($19,930), Honda Civic hatchback ($20,535) and Chevrolet Cruze hatch ($22,115) start higher and don’t offer all-wheel drive even as an option. The sedan’s value is also strong. With a base price of $19,215, it’s a bit less expensive than the base Civic and Corolla sedans, but costs about $1,000 more than a base Elantra.

With this redesign, Subaru now has an underdog worth cheering for. The new Subaru Impreza has its quirks, but so did baseball’s ultimate underdog, the World Series Champion Chicago Cubs.