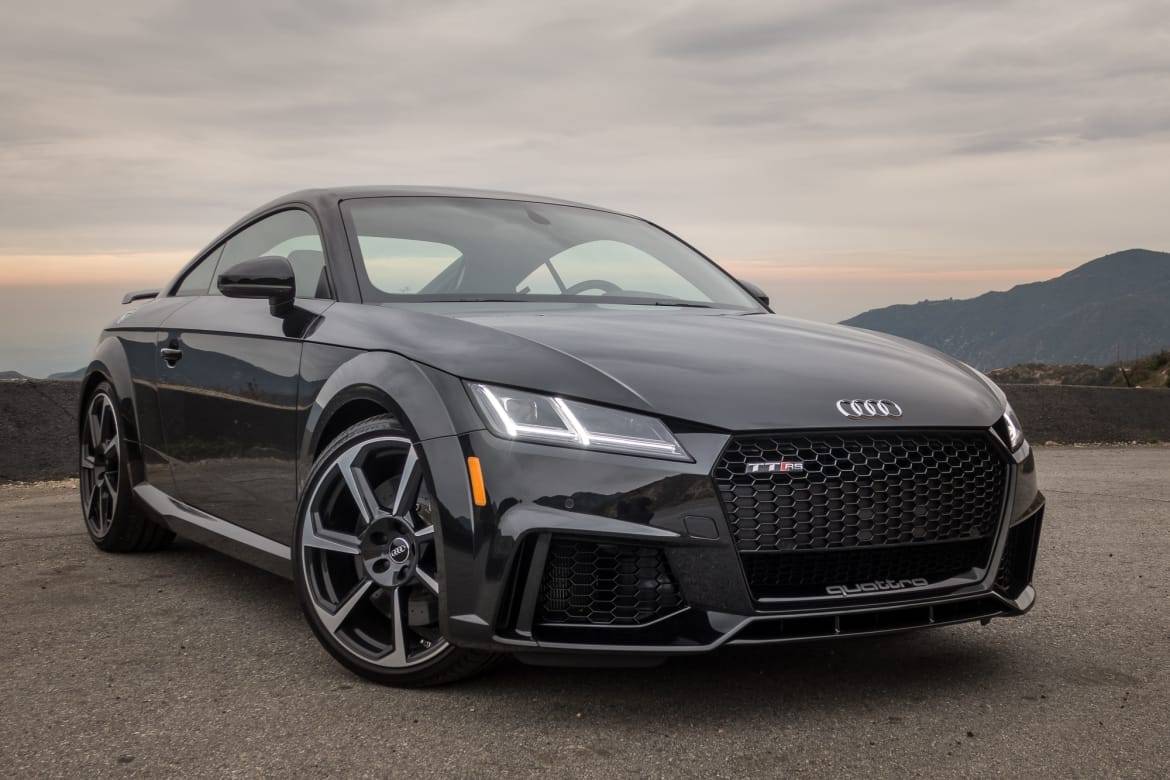 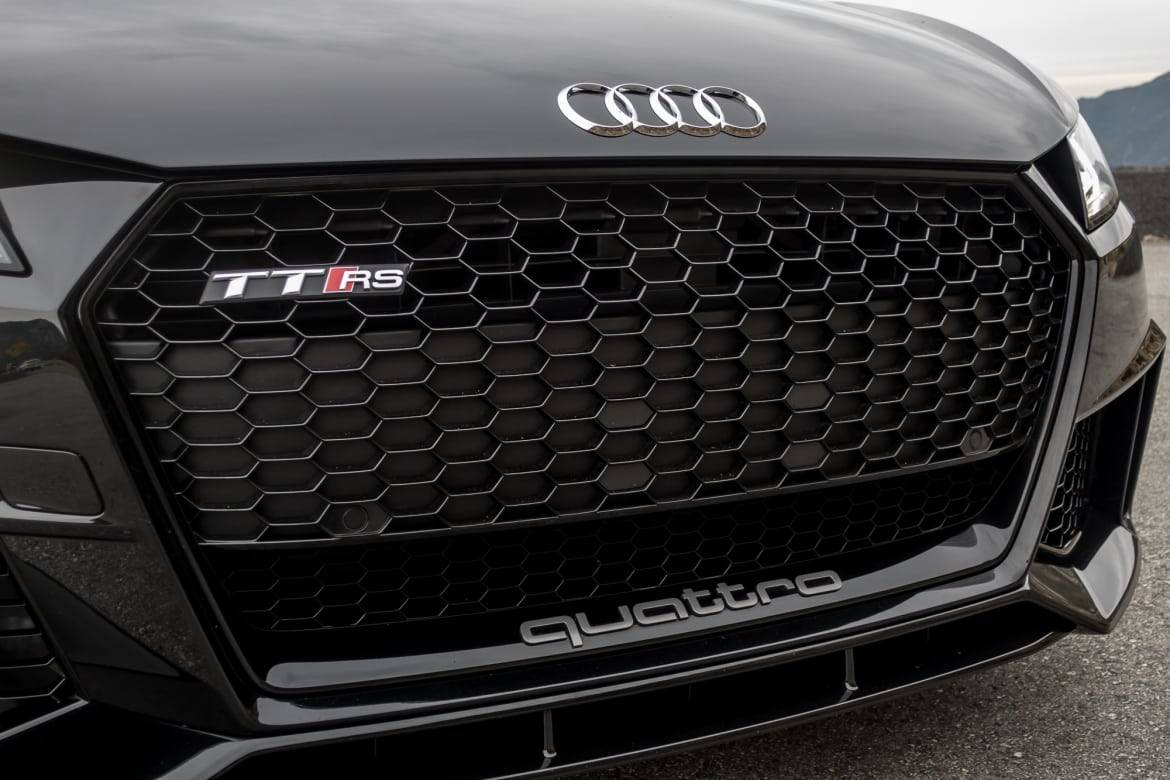 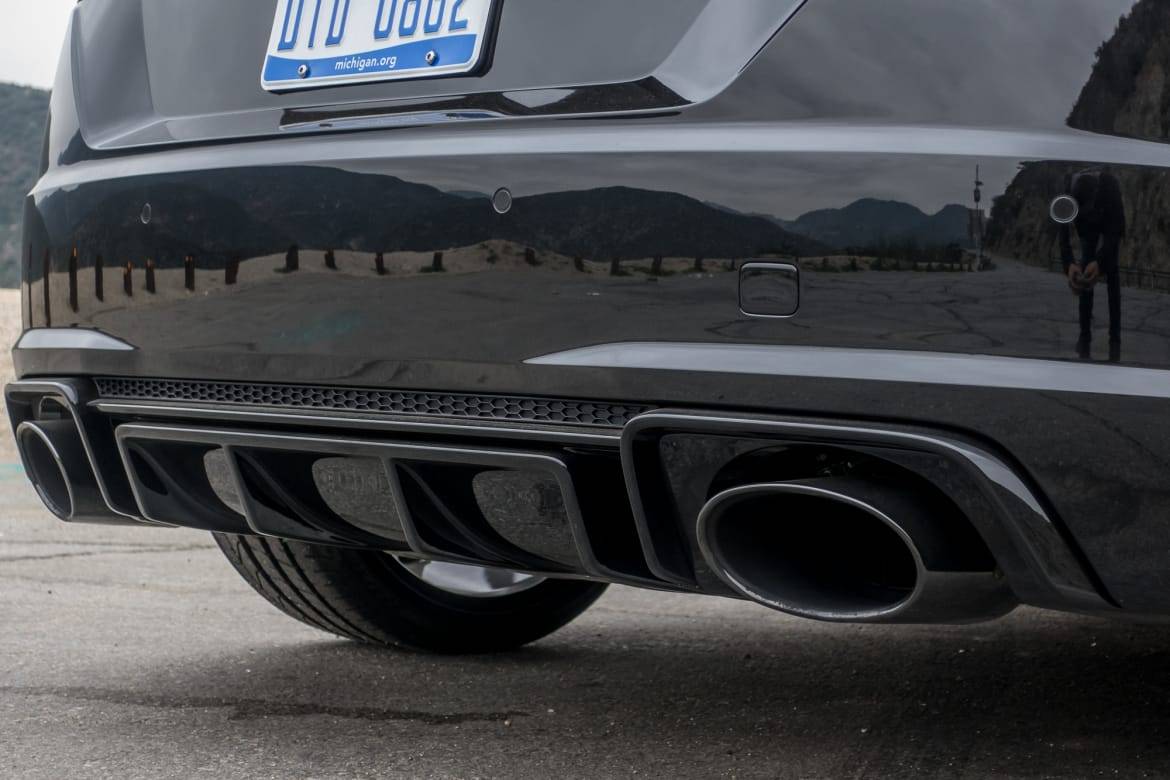 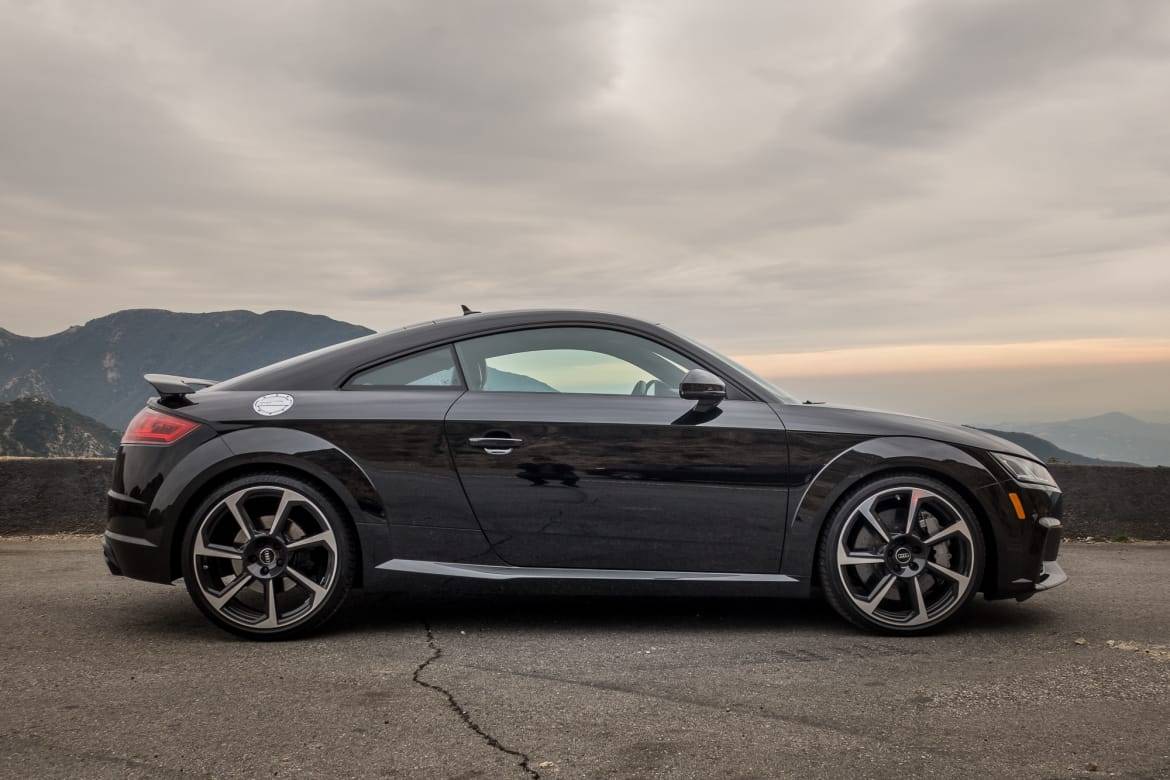 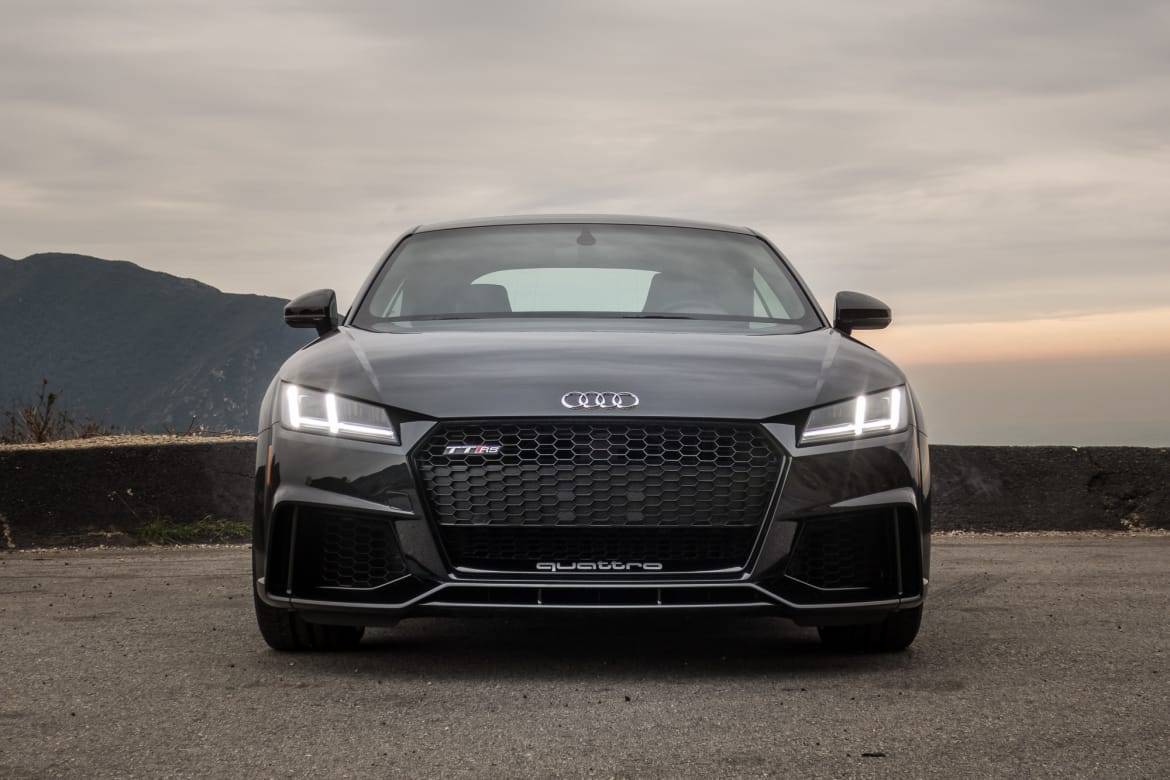 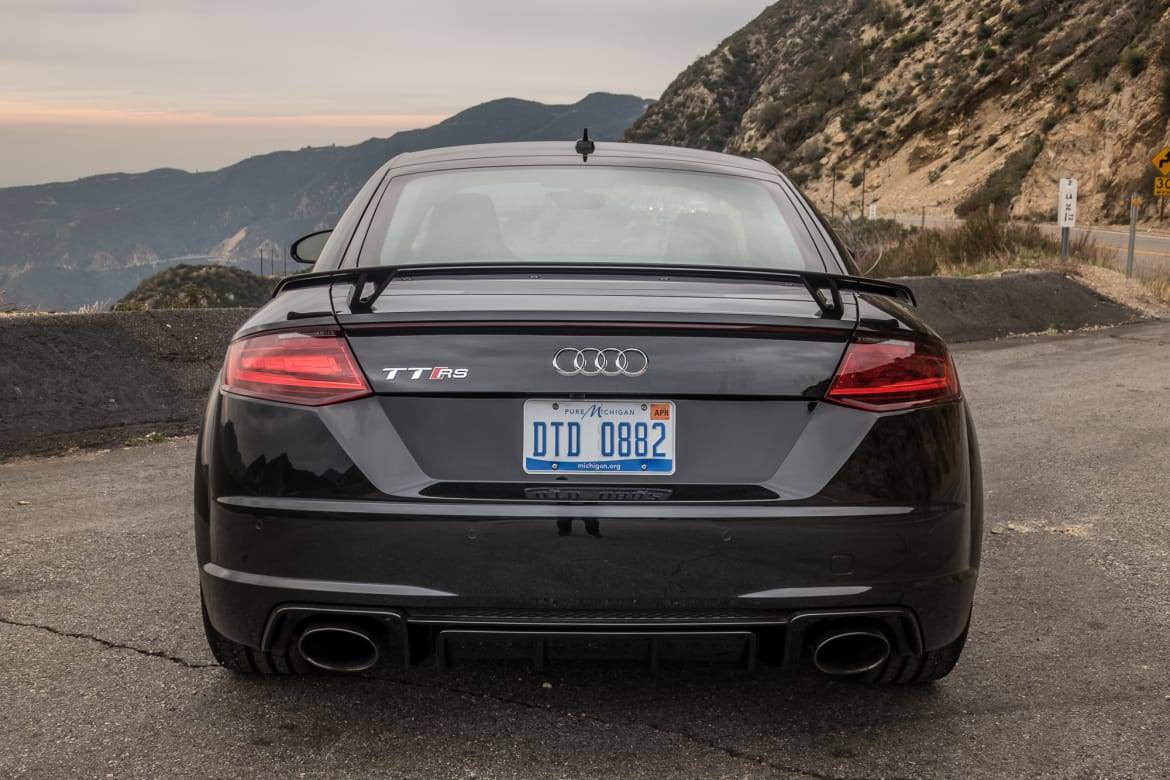 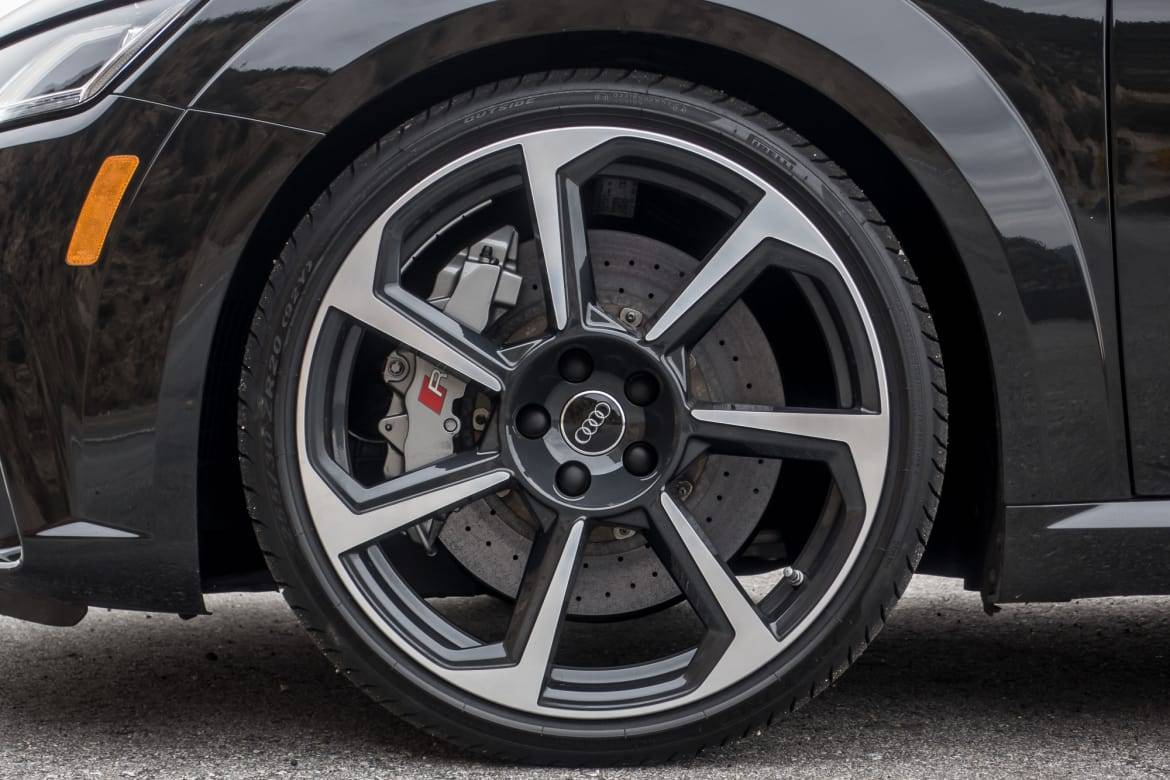 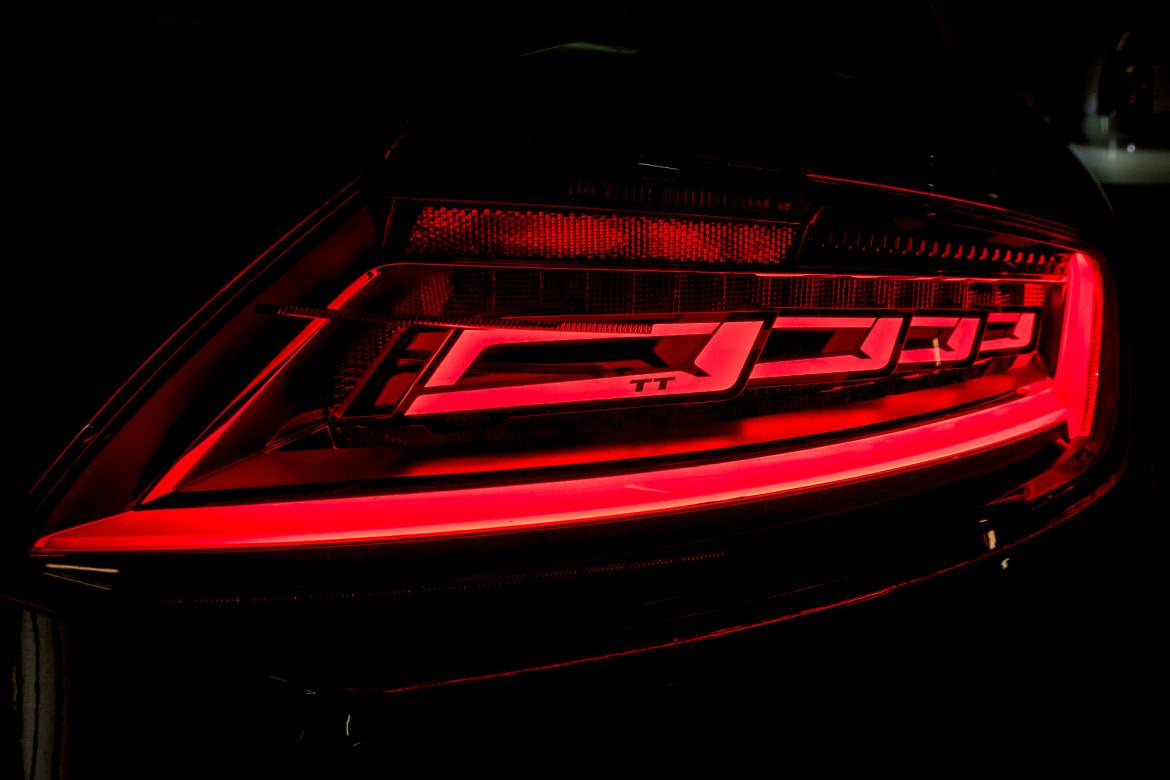 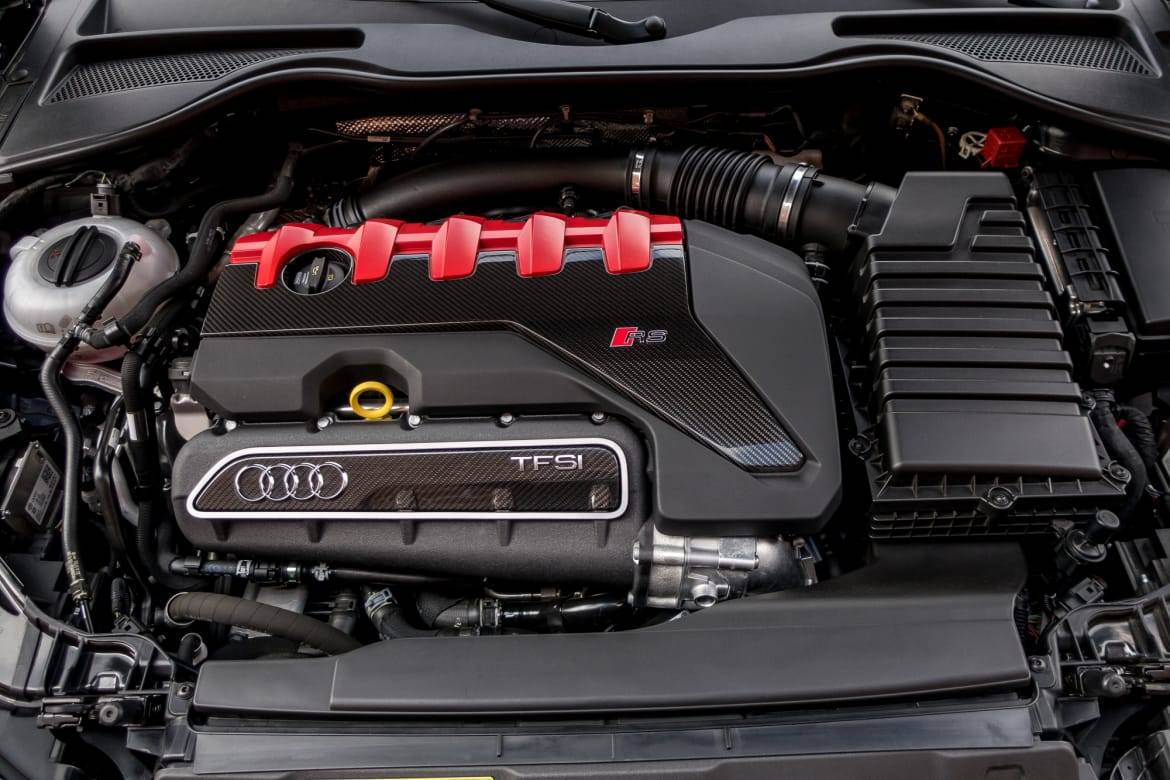 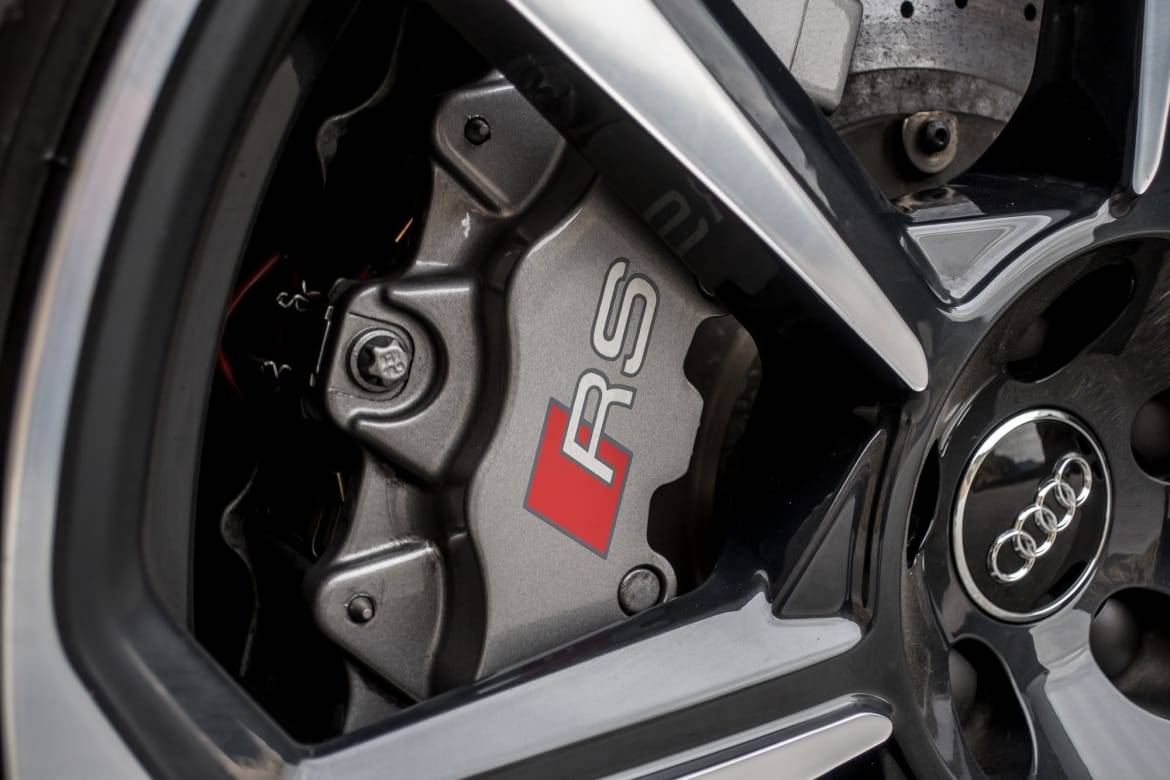 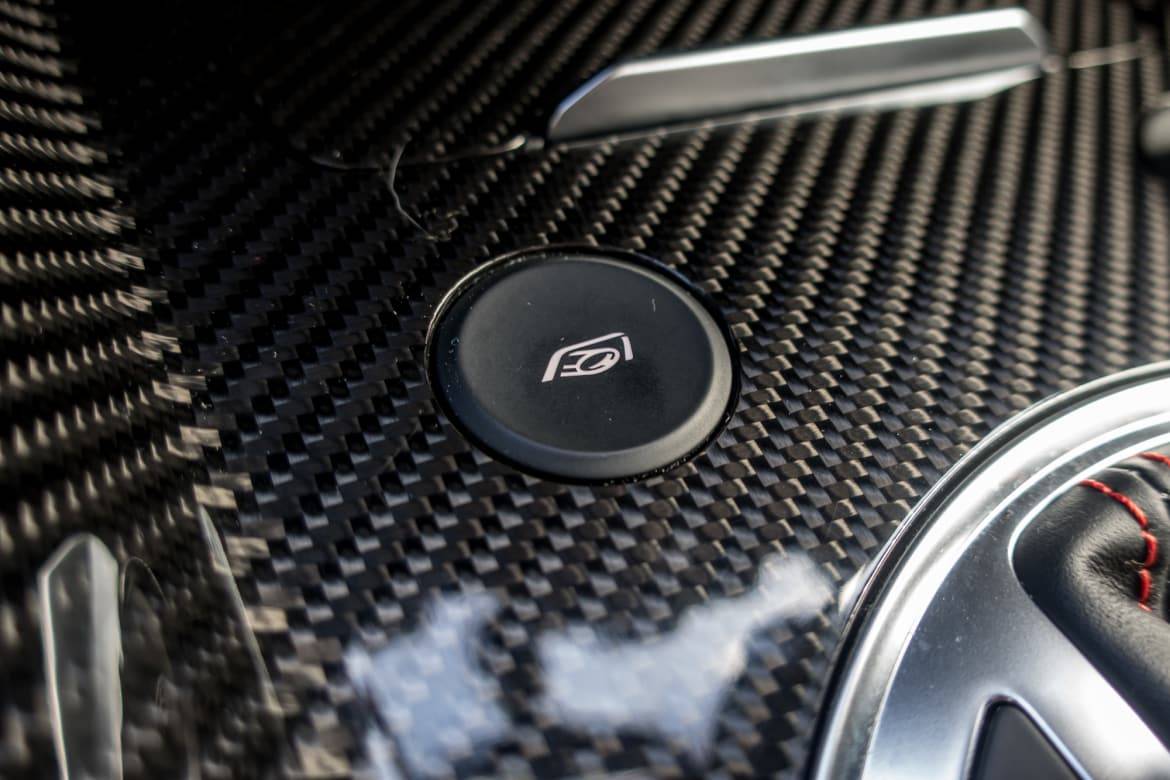 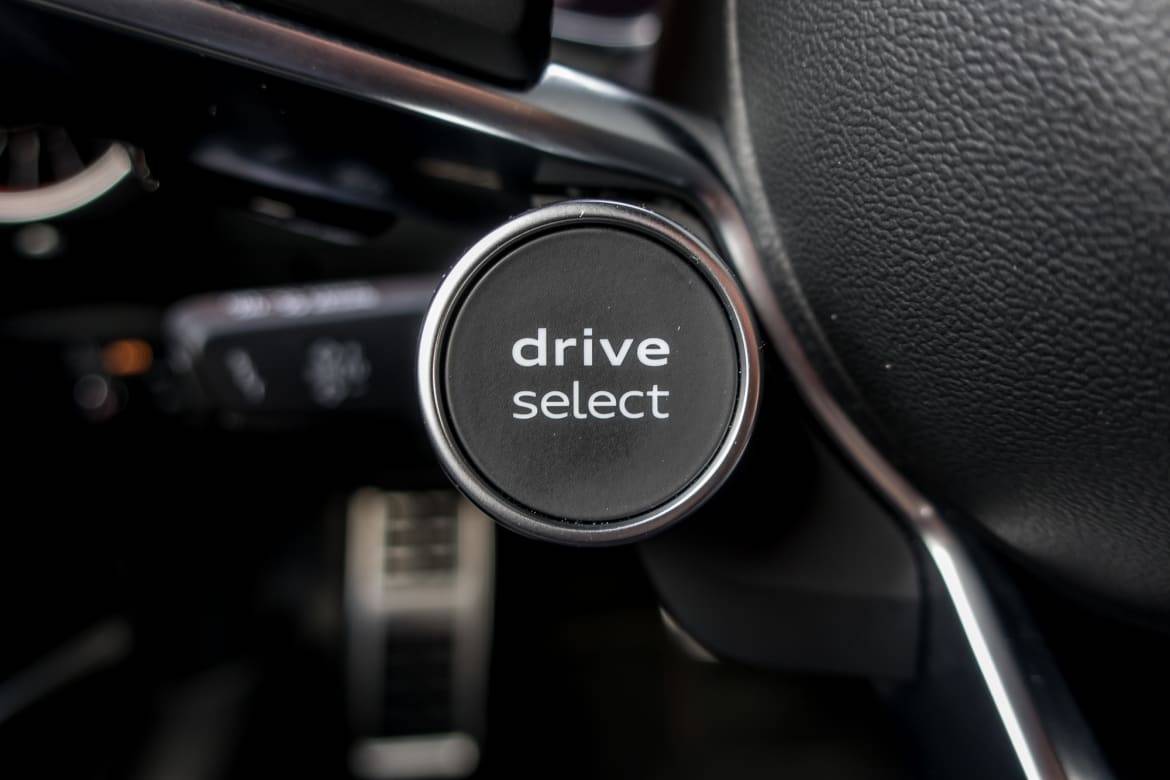 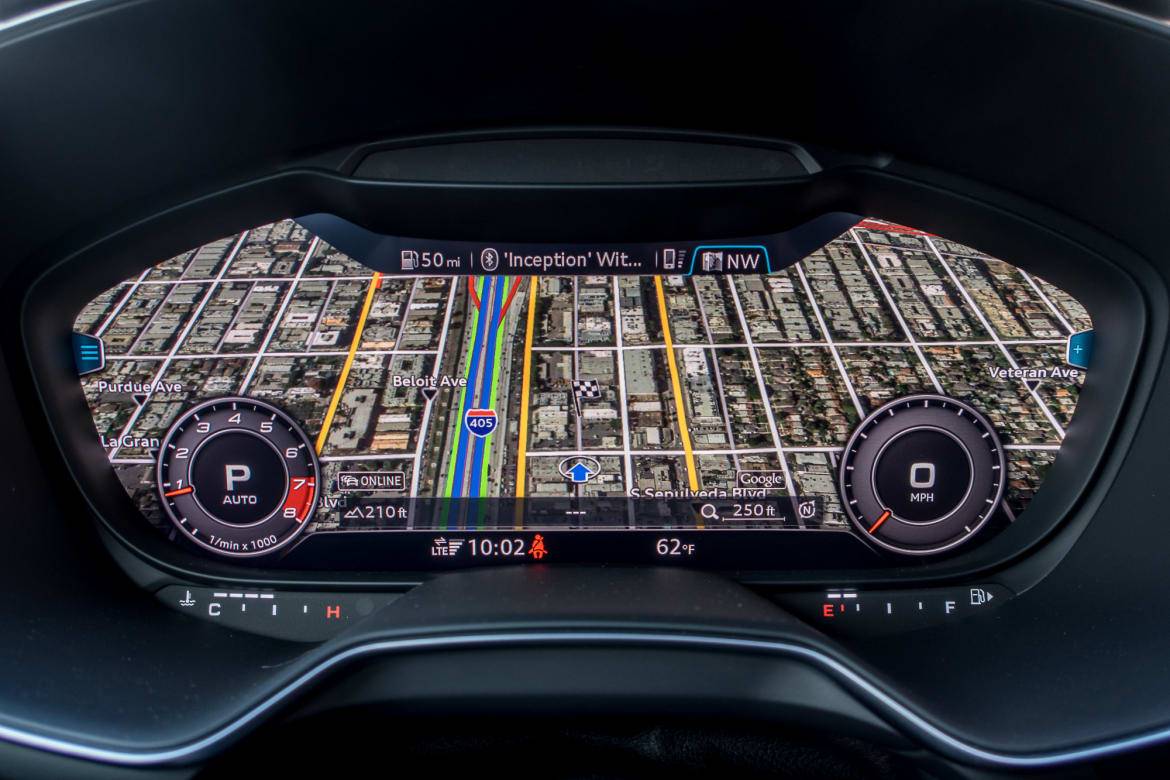 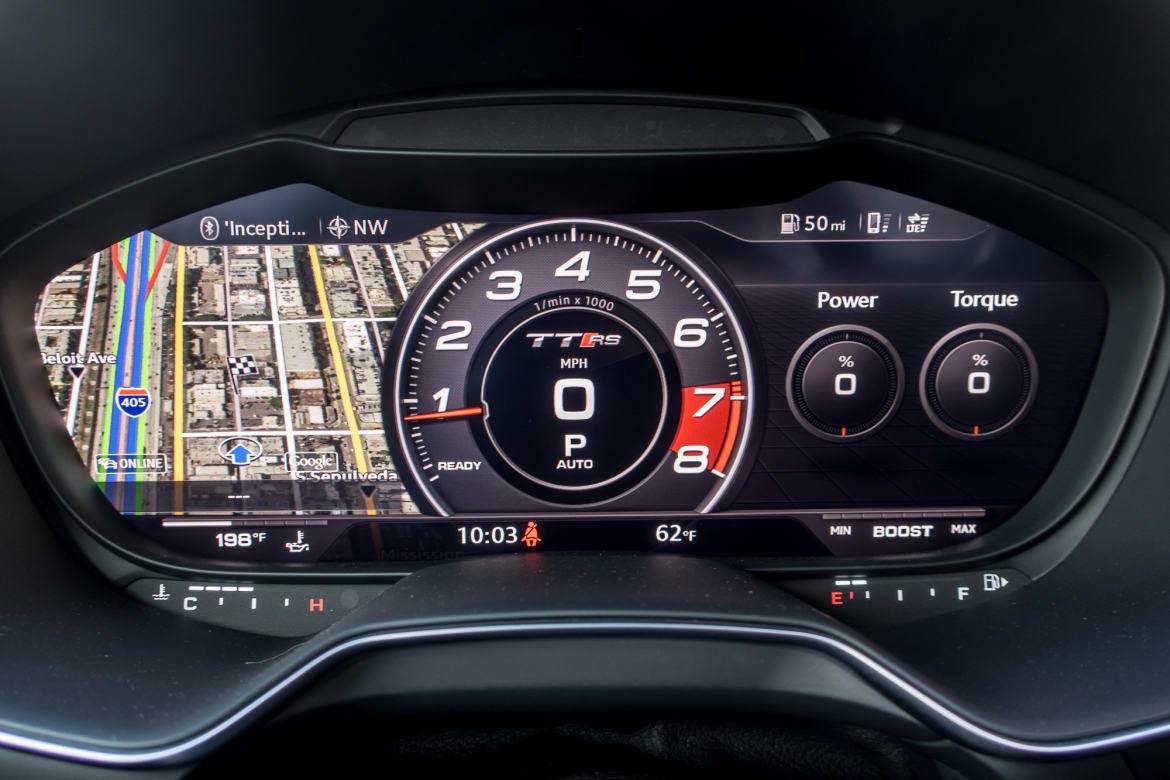 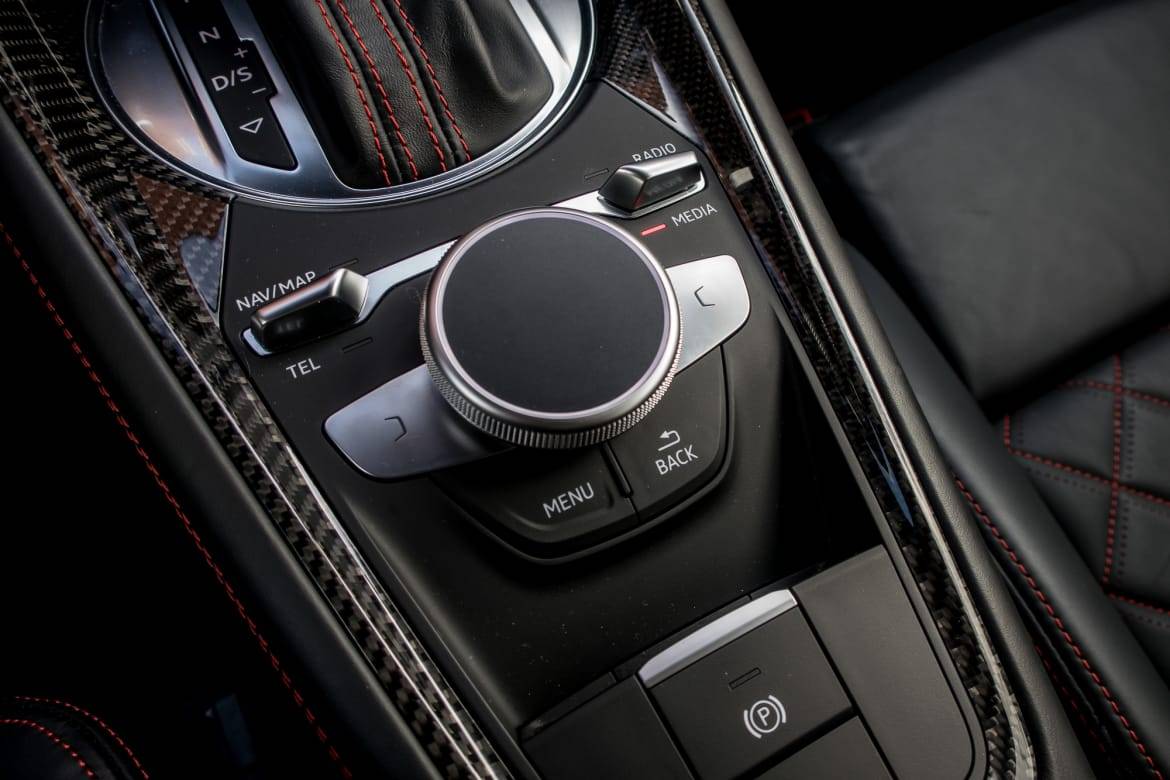 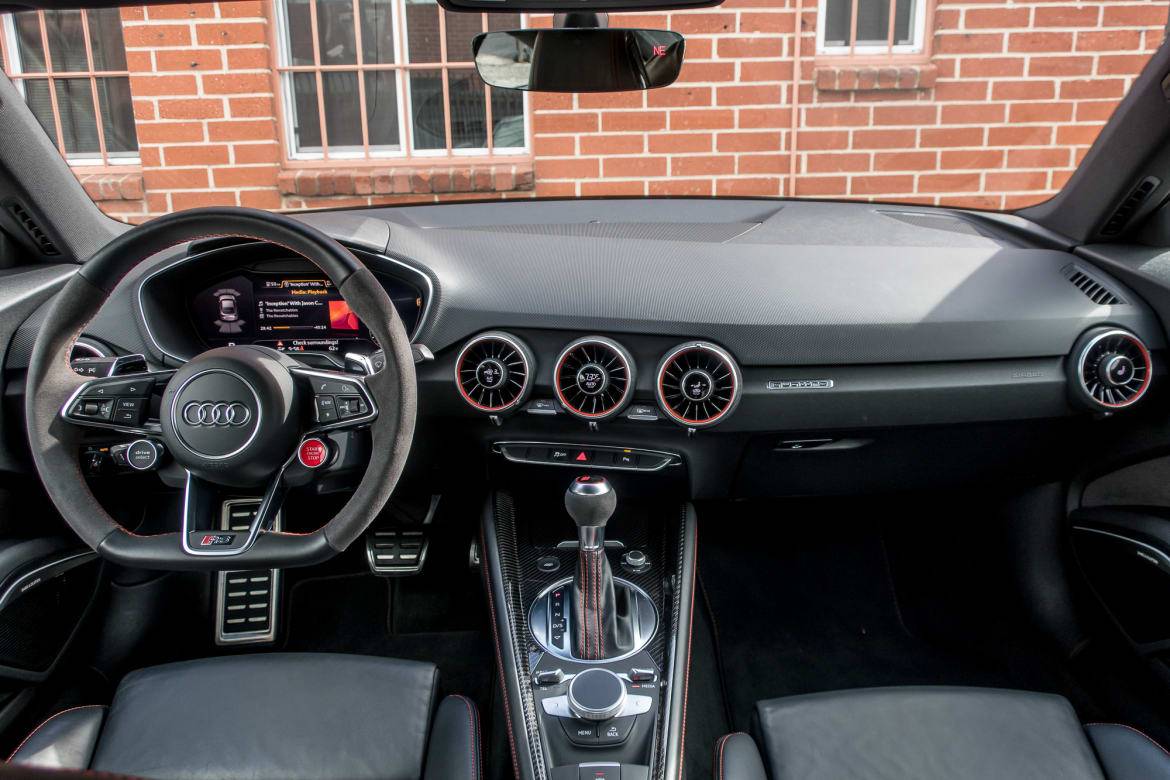 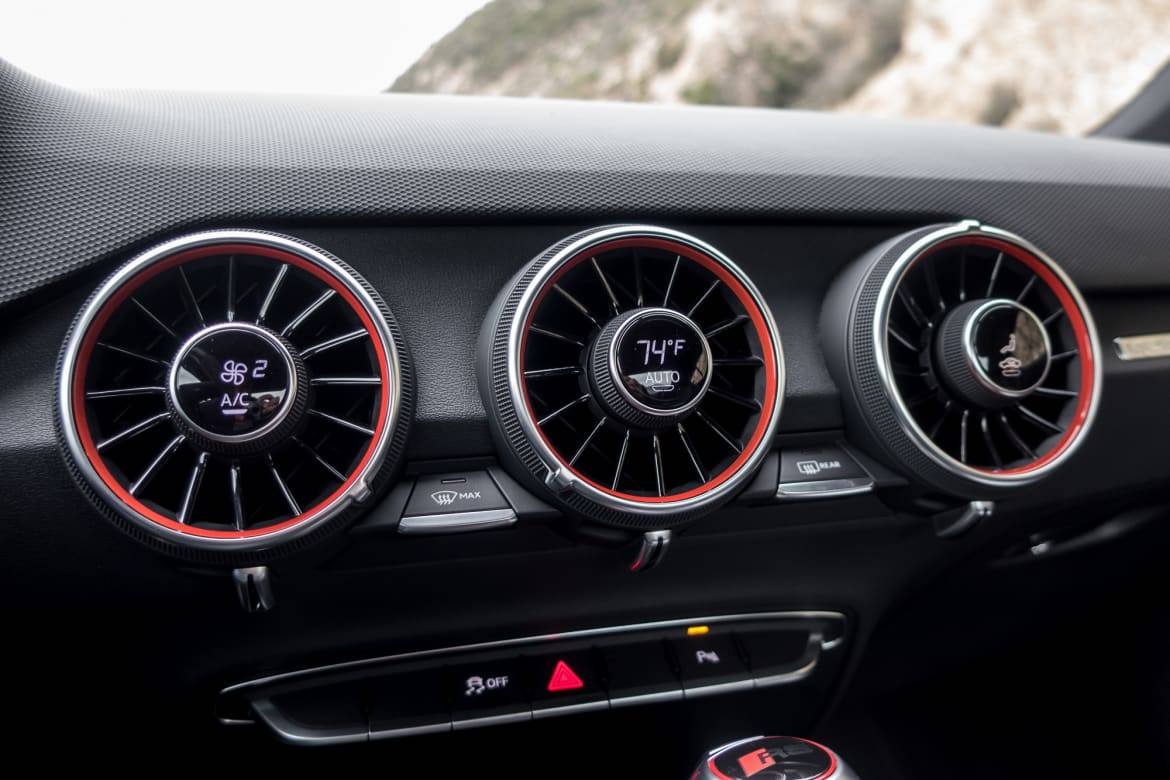 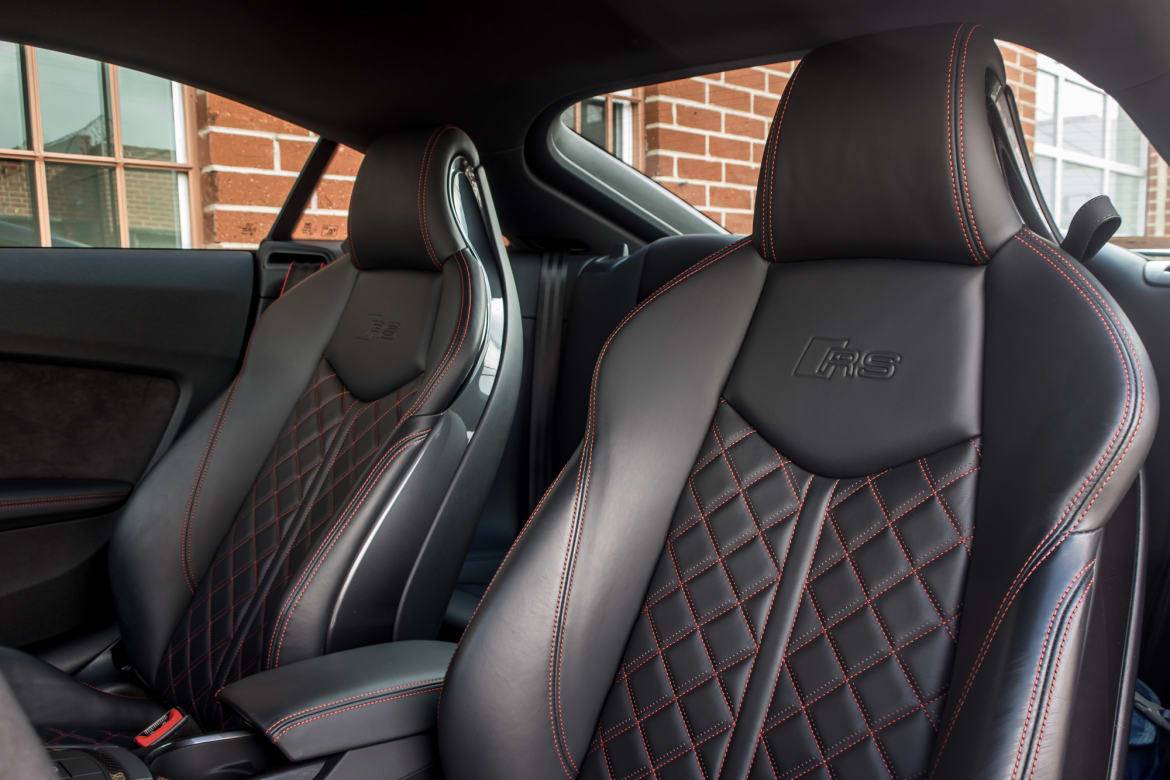 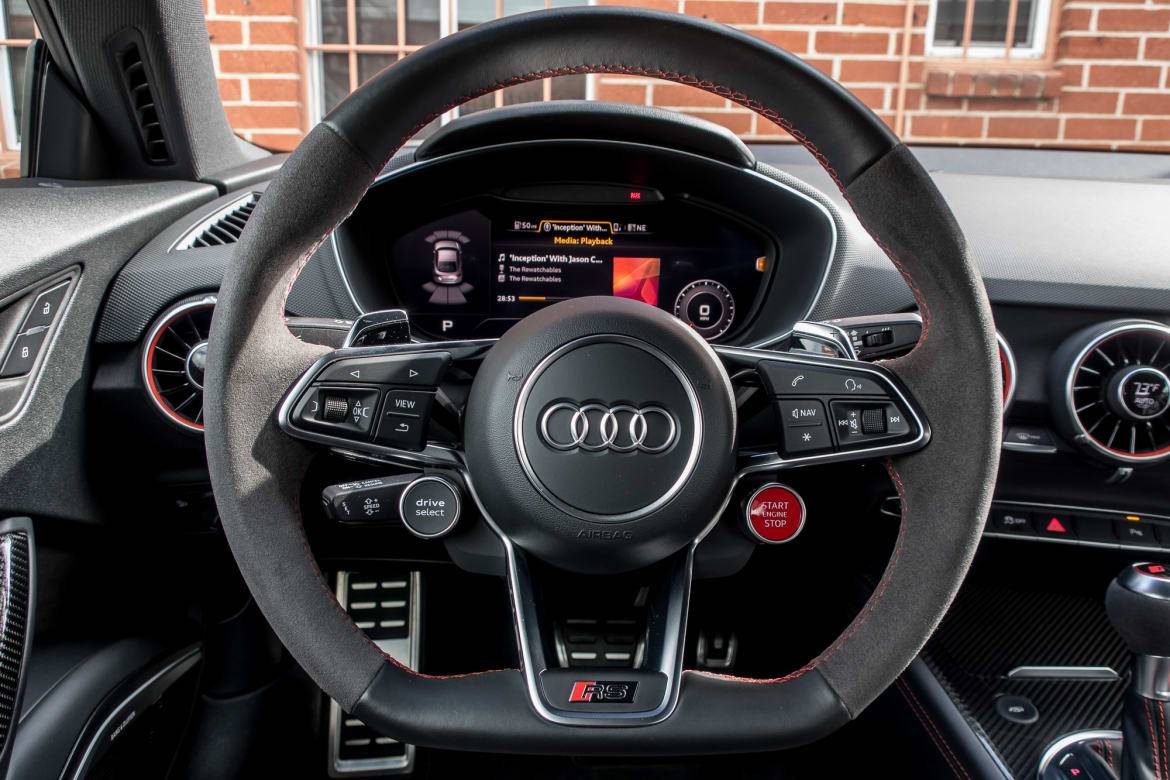 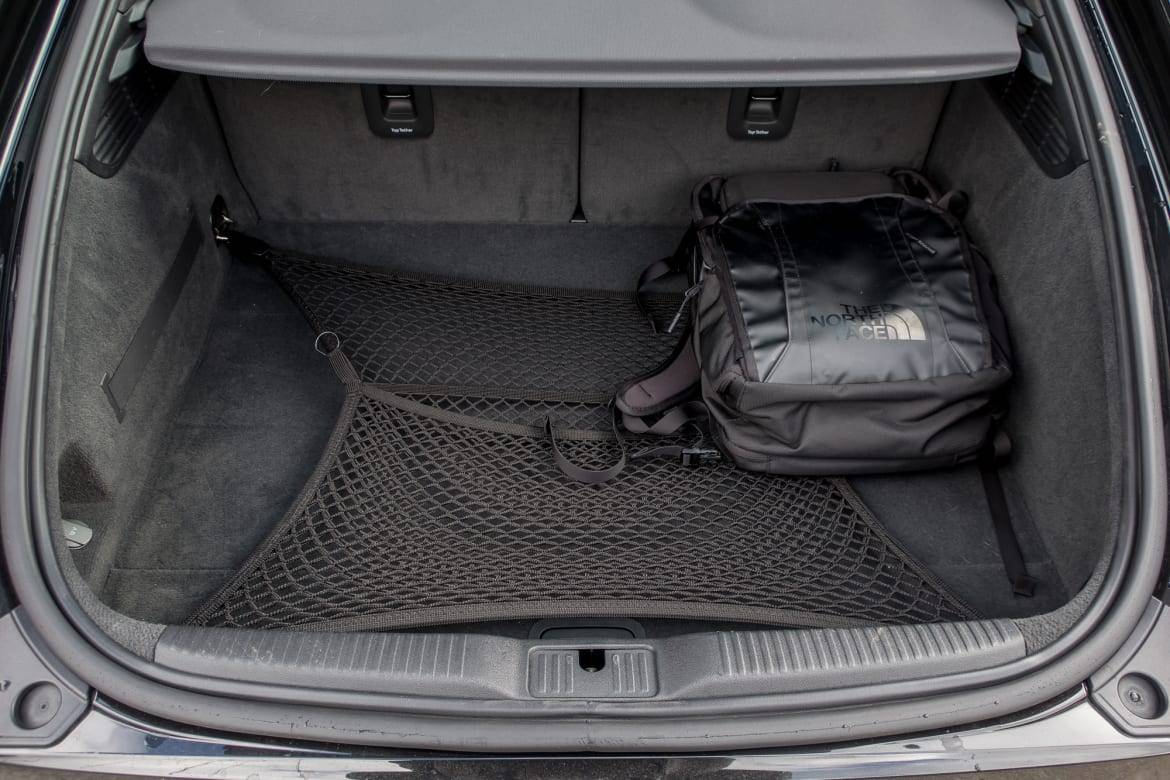 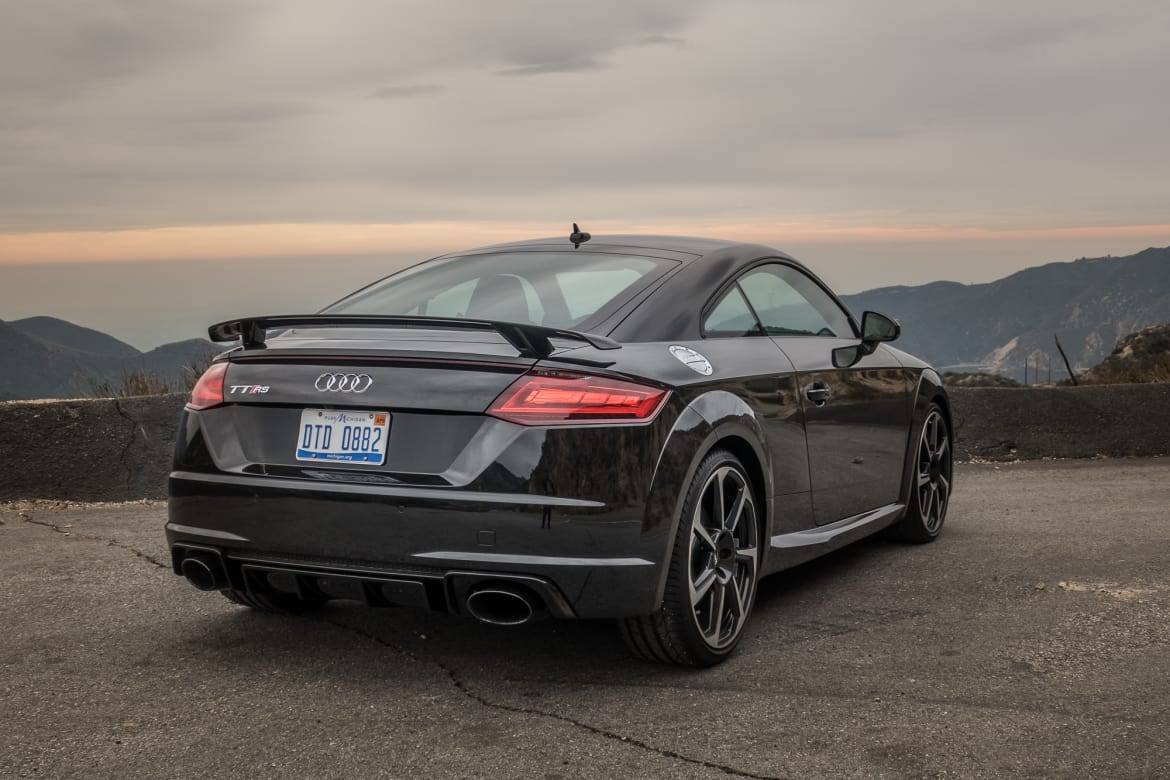 The singular adjective that has described the Audi TT coupe throughout its run has been “cute.” That’s because of its roly-poly shape, which evokes Volkswagen Beetles of old more than it does a performance car.

But now we have a reborn TT RS, which seems to be singlehandedly trying to lift that cloud of cuddliness on behalf of the whole TT lineup. While it has the same general, friendly shape to its profile, Audi has added enough angles and aerodynamic treatments to give it some needed menace. This is an out-and-out performance car, with all other considerations secondary — and it looks the part.

The TT RS was sold from 2012-13 but took a lengthy hiatus before returning as a 2018 model alongside the RS 3 (see my review). The two cars have a lot in common; not only do they share the Volkswagen group’s MQB architecture underneath, they have identical powertrains and RS-tuned suspensions, similar interior components and even the same top speed — 155 mph or 174 mph with the Dynamic Package, Audi says.

While I found a few key areas of the RS 3’s performance disappointing, the TT RS has some extra things going for it. First of all, it’s lighter by 287 pounds and has a 5-inch-shorter wheelbase at 98.6 inches. Both of those things help give it some of the sharpness the sedan lacked. (Just beware, because in the TT RS that sharpness can cut both ways.)

The TT RS sits in rather illustrious company alongside luxury sports coupes like the BMW M2, Jaguar F-Type and Porsche 718 Cayman. Compare the TT RS with those cars here.

Under the hood is a 400-horsepower, turbocharged 2.5-liter five-cylinder engine that makes 354 pounds-feet of torque. Audi’s Quattro all-wheel-drive system with RS-specific tuning is standard, and the only transmission is a seven-speed dual-clutch automatic.

With its aggressive styling and when equipped with optional sport exhaust, the TT RS certainly looks and sounds the part, and it backs that up with excellent acceleration. The car’s measurables are impressive, including a zero-to-60-mph time of just 3.6 seconds, Audi says, and those 155/174-mph top speeds I mentioned earlier. The engine is a good match for the car; it never felt as though it would overwhelm the grip of the tires, and in its most aggressive settings it allows some slip, though that can be corrected with a small adjustment of the right foot.

New Paint, Not Much Else for 2023 GMC Acadia

2023 Subaru WRX: No Change but the Change You’ll Pay

This isn’t the easiest car to keep in its power band. The seven-speed dual-clutch gearbox tries admirably, but it’s not quite as sharp as some of the best automatics around (Porsche’s seven-speed PDK box comes to mind). With some practice, though, the TT RS will sling out of turns with a satisfying kick.

The TT RS requires premium gas and gets an EPA-estimated 19/29/22 mpg city/highway/combined.

Besides increasing the TT RS’ top speed and adding those front ceramic brakes, the Dynamic Package also brings with it a fixed sport suspension. The “fixed” part of that feature name is important, as it replaces the standard adaptive dynamic suspension, which can change ride firmness to make things more comfortable in day-to-day driving. With the fixed suspension, the Audi rides the same way all the time — to the car’s detriment.

I’m generally a fan of a suspension that’s on the stiffer side. My past two daily drivers have been a Porsche Boxster and a Mazda MX-5 Miata, two vehicles known for superb handling but not comfort. That’s true of the TT RS with the fixed suspension, as well: On the right road (well-paved and twisty), the car feels truly alive — much more so than the RS 3 sedan with the magnetic adaptive suspension I drove recently. In any other circumstance, however, the fixed sport suspension is unbearably harsh; every road seam or imperfection is translated from the pavement into the cabin. Bumps make the car shake and creak all over. As I looked down an alley for a spot to photograph the car, I went over a pothole and my head hit the side window. This suspension has clear performance benefits, but I couldn’t live with it every day; I’d stick with the standard setup.

Interior, With a New Multimedia Experience

The TT RS comes with a great interior. Everything from the materials and the seats to the minimalistic dashboard design fits both the car and its price tag. The Nappa leather seats are a highlight: comfortable, but with plenty of bolstering for when the car gets sideways. The leather feels expensive in the way only good hide can.

One aspect of the TT RS interior especially stood out to me, a trait also found in both the TT and TTS: There is no central multimedia screen. In the middle of the dash where a screen would normally be, there’s just three large, circular air vents. The benefit comes from where the multimedia screen has been moved thanks to Audi’s Virtual Cockpit, which comes standard. All of the usual multimedia screen functionality has been added to the Virtual Cockpit display, which doubles as the instrument panel. Drivers still control the system via a multifunction knob and buttons on the center console — the same ones employed by Audis with a central display. While it’s bothered us in the past that Audi systems haven’t used touchscreens, this felt different to me, primarily because the instrument panel is much easier to see at a quick glance down than are center dashboard screens.

In the TT RS, the speedometer and tachometer shrink down nicely when using the multimedia system, though they remain visible to check your speed. Another feature in the TT RS that I’ve long felt has been missing from Virtual Cockpit is the incorporation of Android Auto and Apple CarPlay displays. Once again, in Audis with central displays, Android Auto maps appear only there, and the Virtual Cockpit displays just a compass, even though it shows Audi maps there when Android Auto isn’t active. Having it in the Virtual Cockpit, as the TT RS does, is a much better solution for navigation if you prefer Google Maps to Audi’s native navigation and always want it displayed in the instrument panel rather than mid-dashboard.

The TT RS is fun, but it’s rather expensive fun. That $80,000 as-tested sticker price puts it in range of the Chevrolet Corvette Z06 and Porsche 718 Cayman GTS, and about $25,000 above the base price of a BMW M2. Each of these are formidable performance cars in their own right and have distinct advantages over the TT RS: The Corvette has 650 hp, the 718 Cayman GTS has better handling and balance, and the M2 is a more well-rounded package.

Still, I wouldn’t discount the TT RS. It holds its own with a solid combination of handling, power and, in my estimation, better interior refinement than the others. Just don’t get it with that fixed suspension unless you plan to drive it only on the flattest of surfaces (or you have the best healthcare out there and a masseuse on speed dial).

New Paint, Not Much Else for 2023 GMC Acadia

2023 Subaru WRX: No Change but the Change You’ll Pay