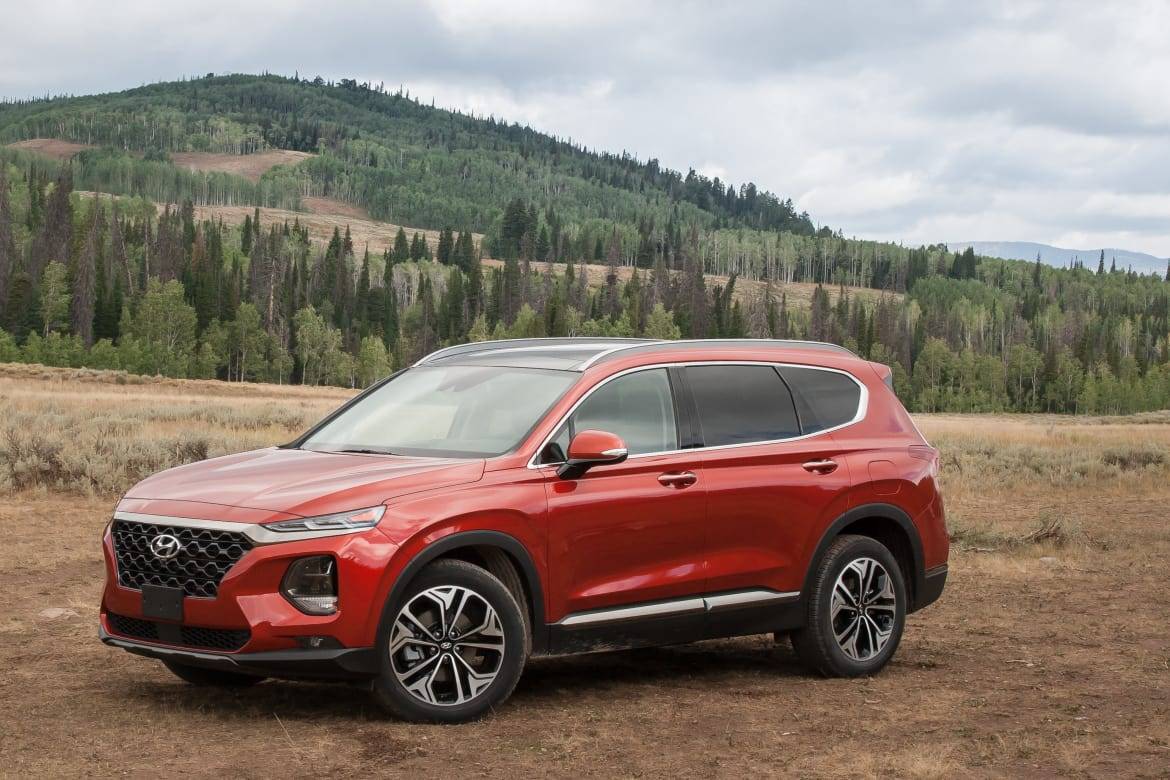 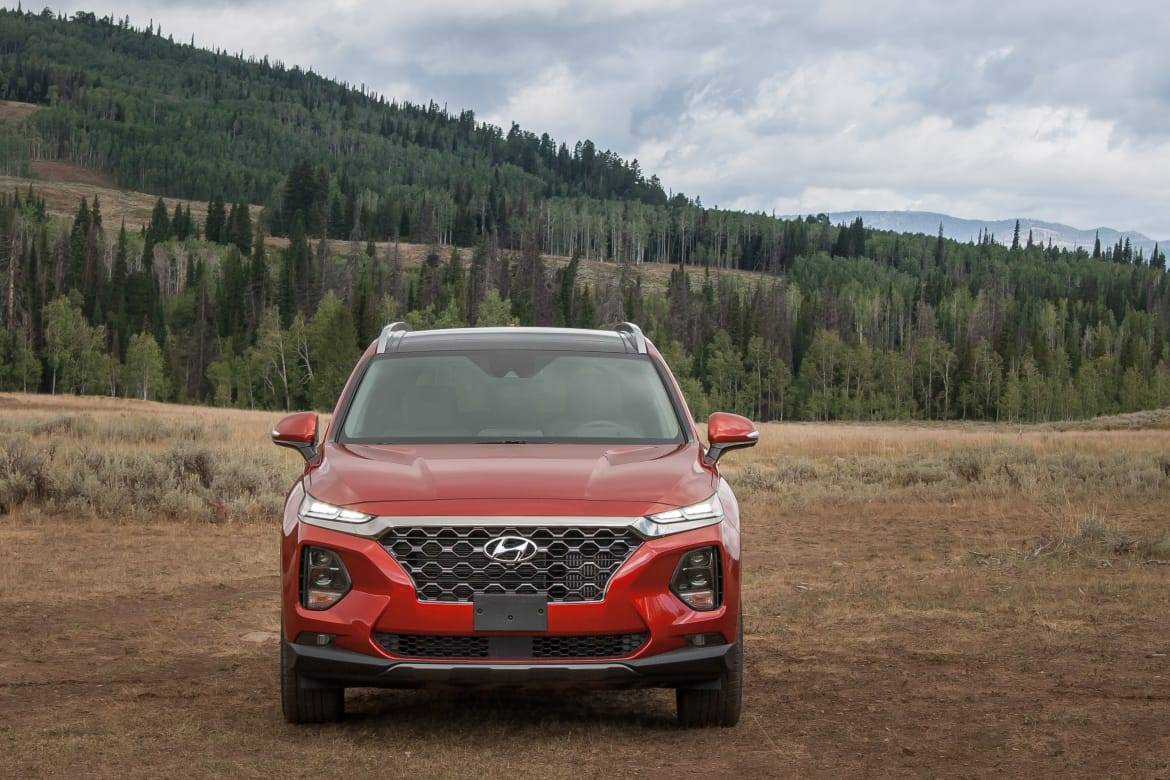 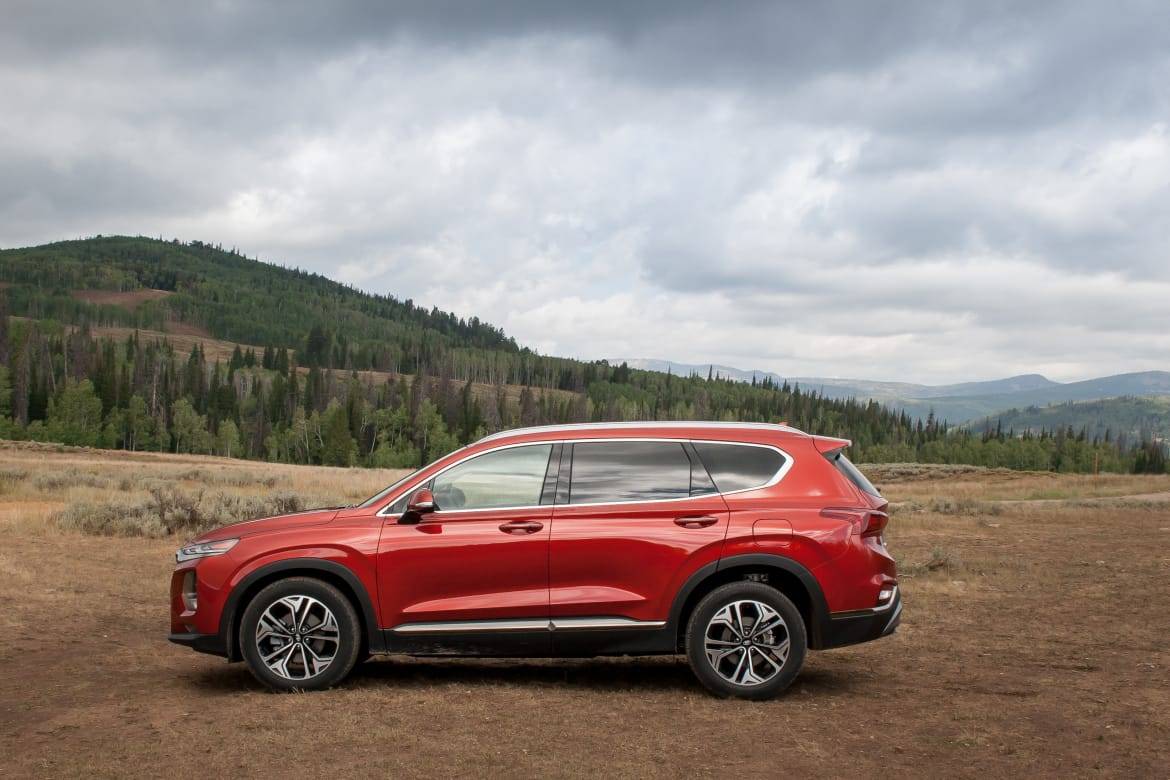 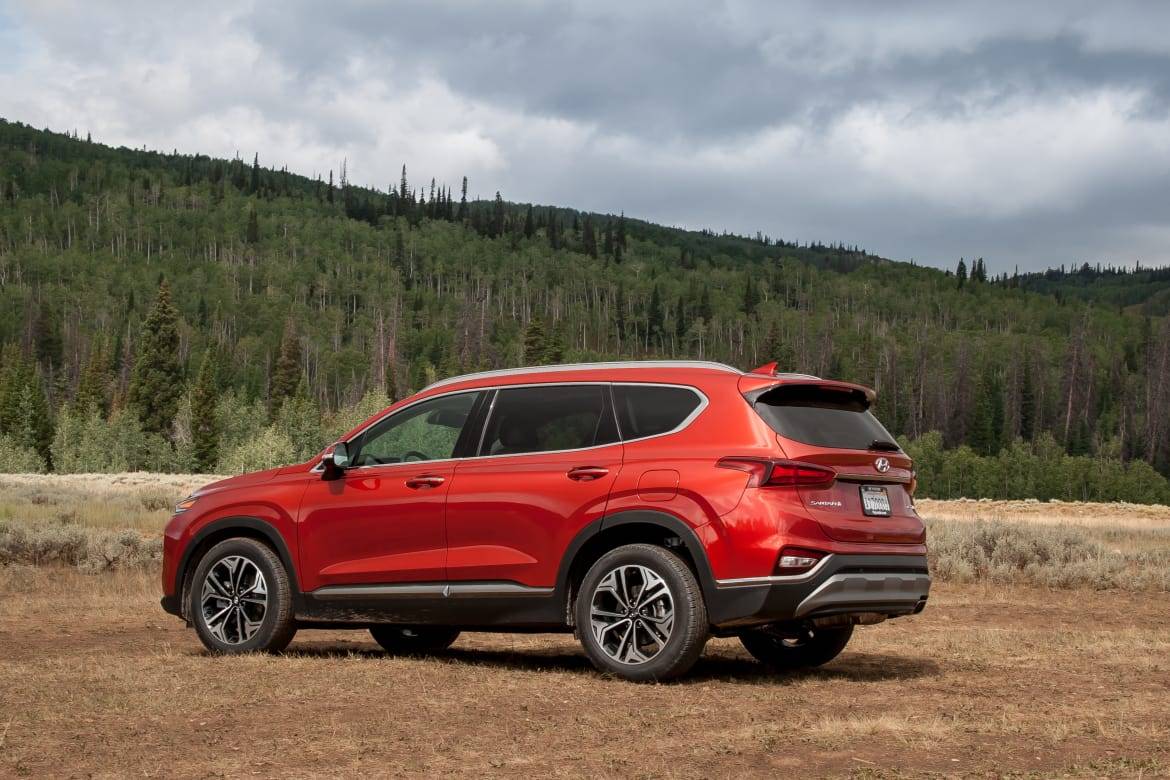 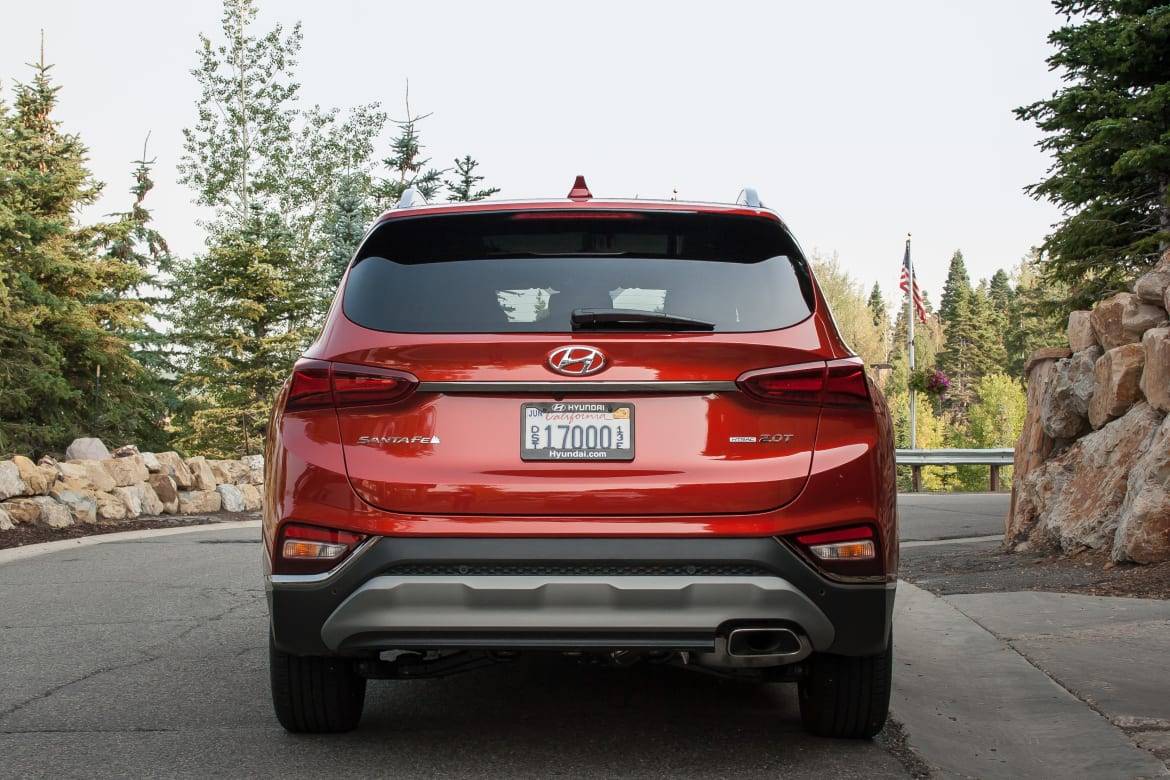 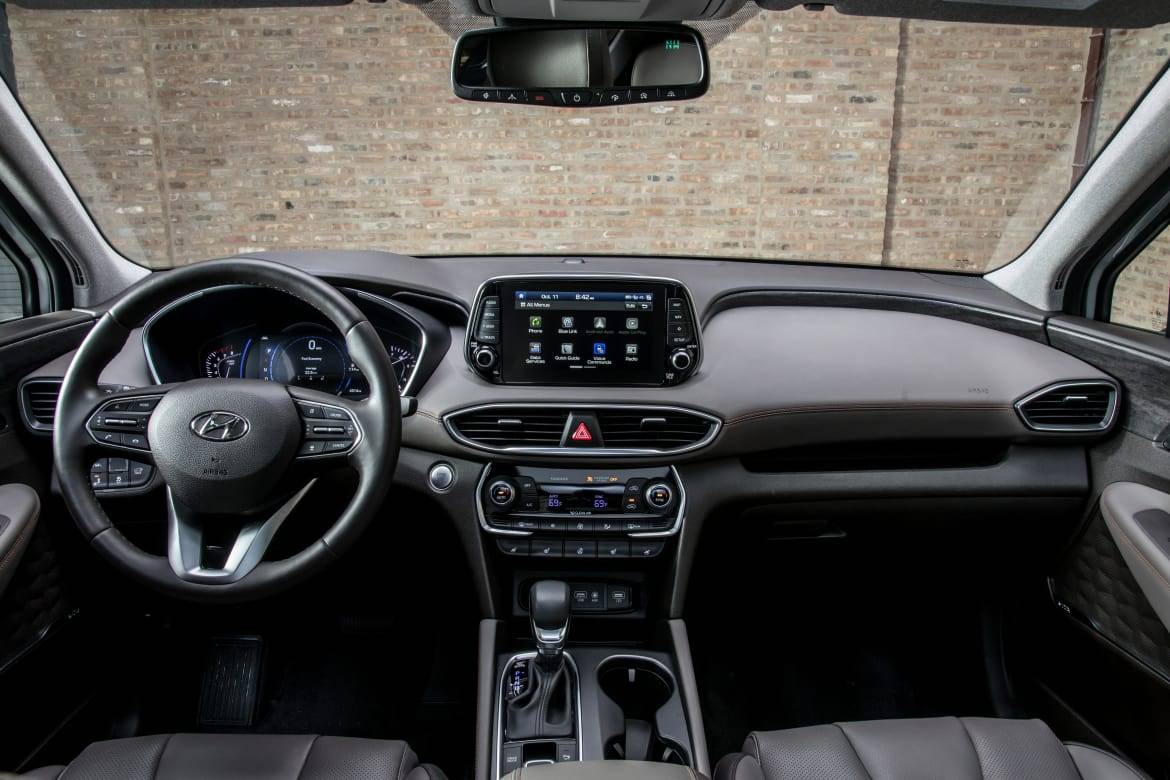 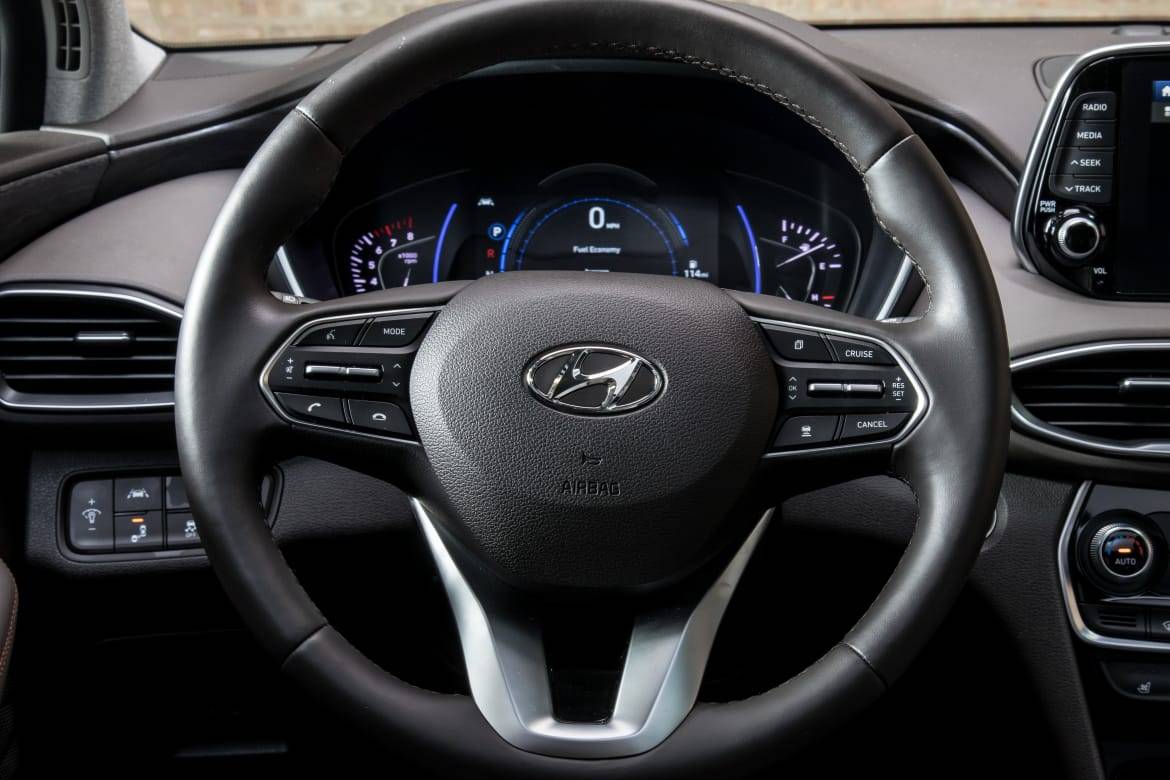 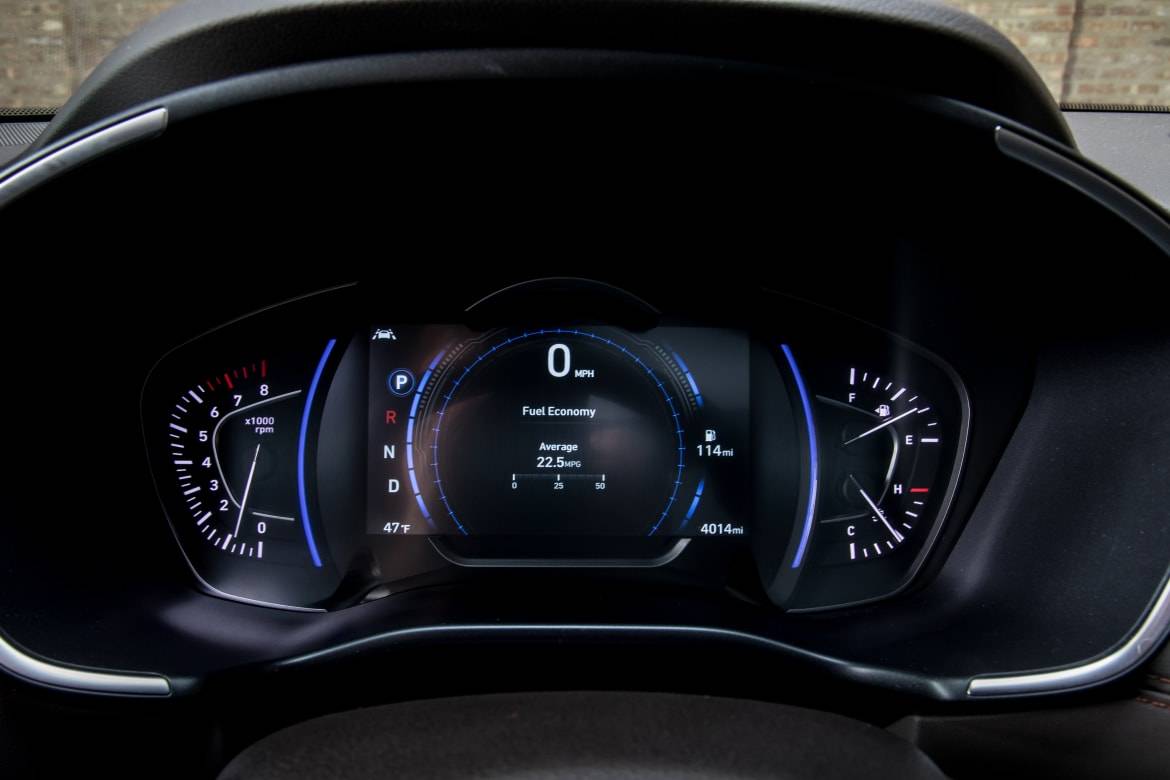 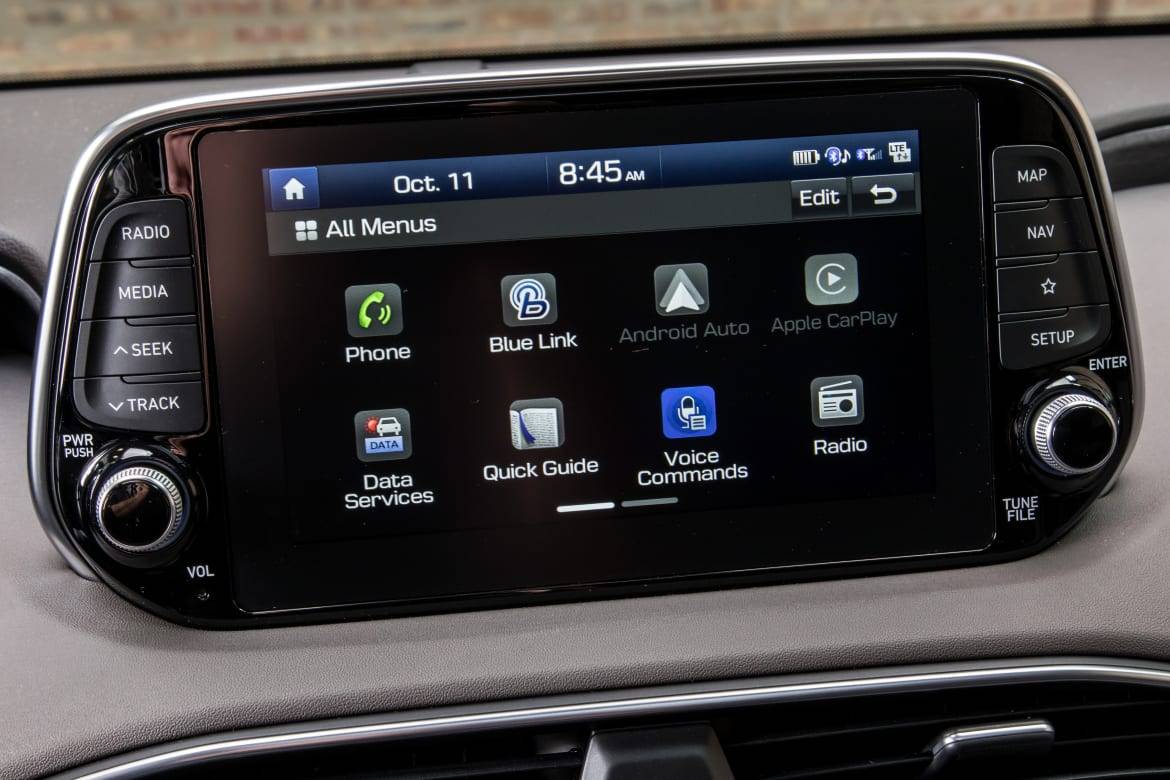 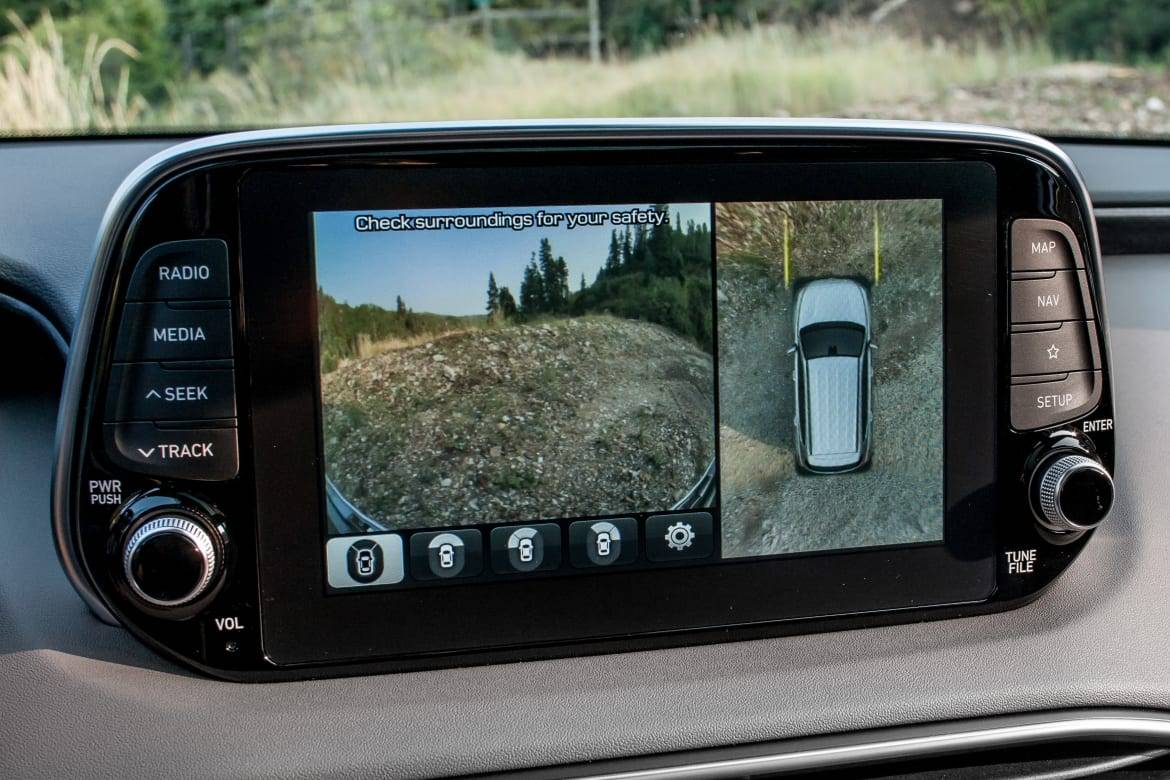 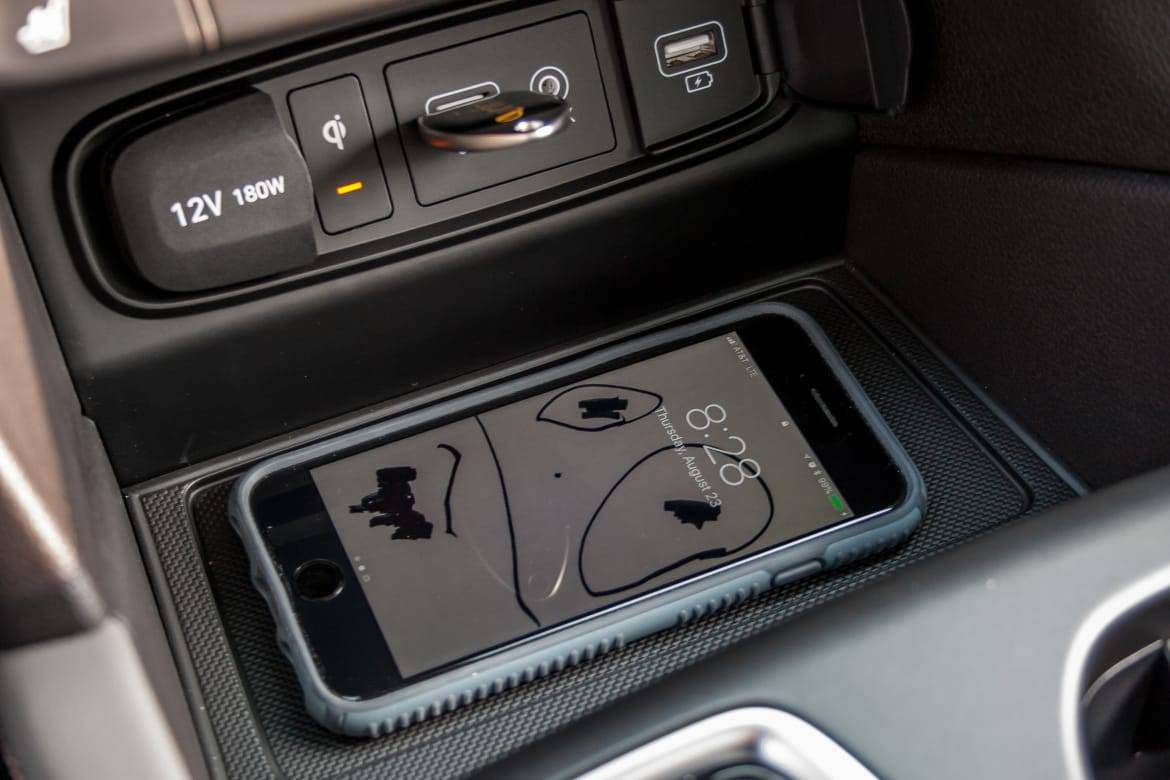 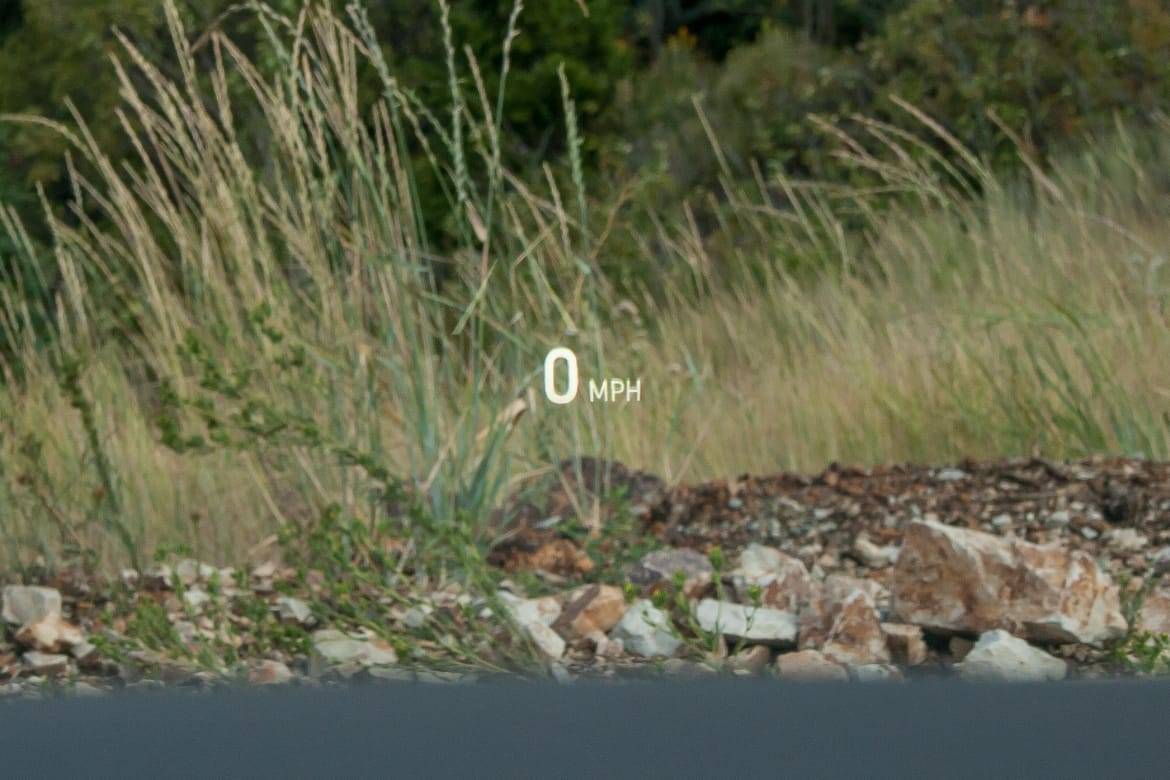 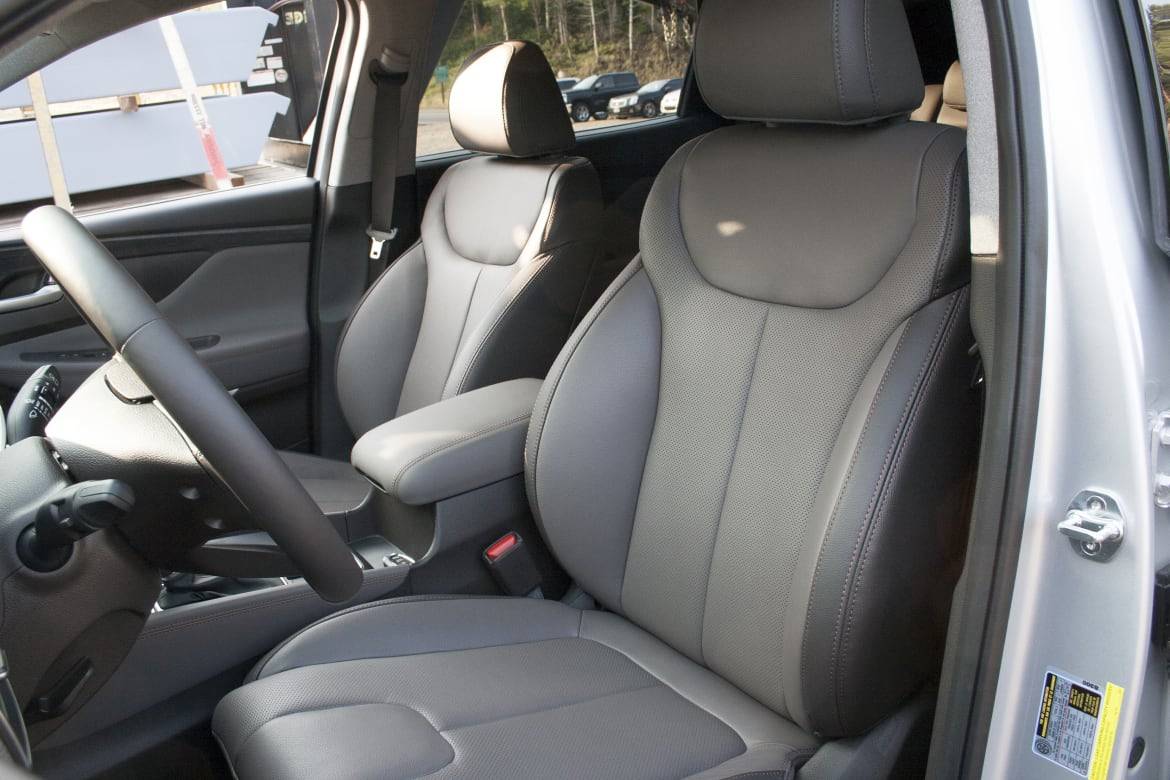 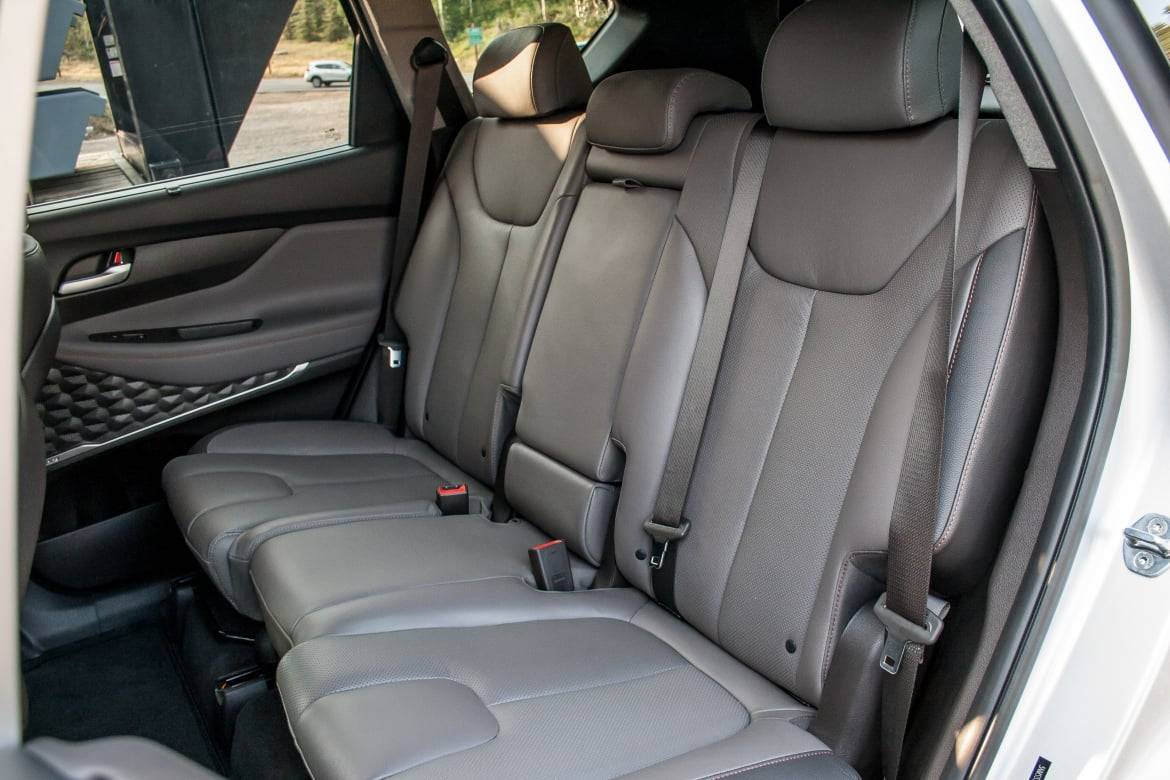 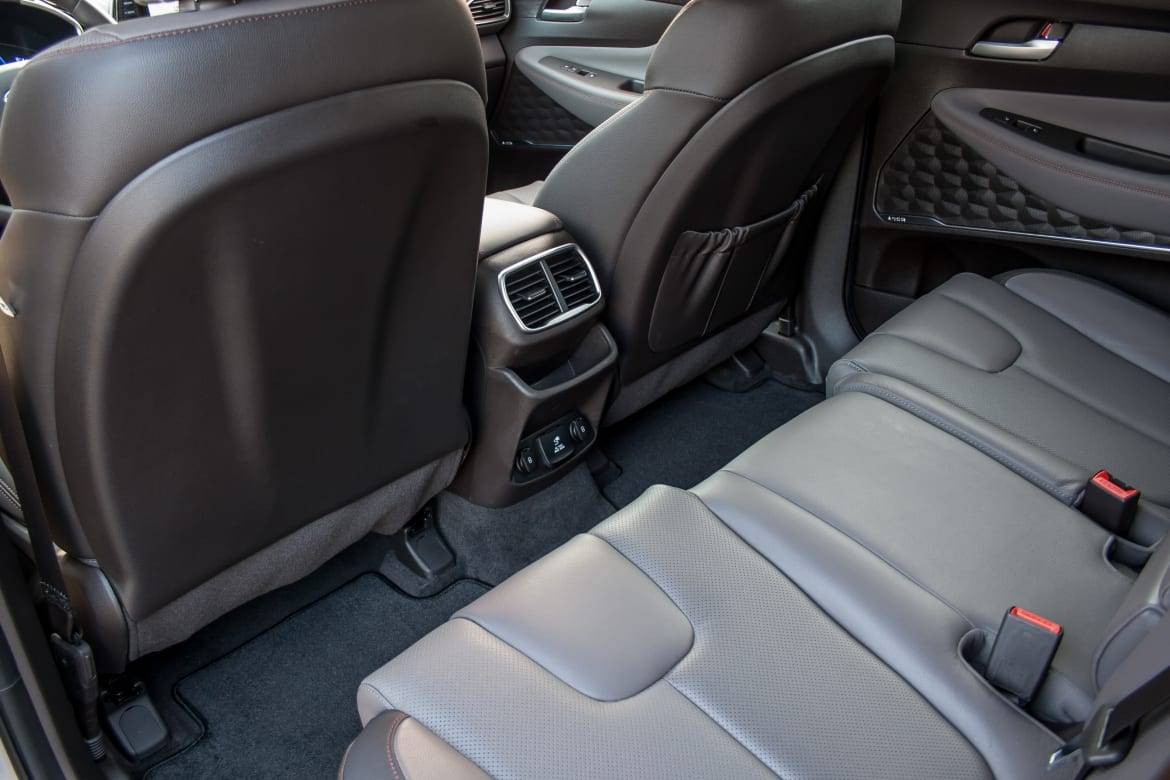 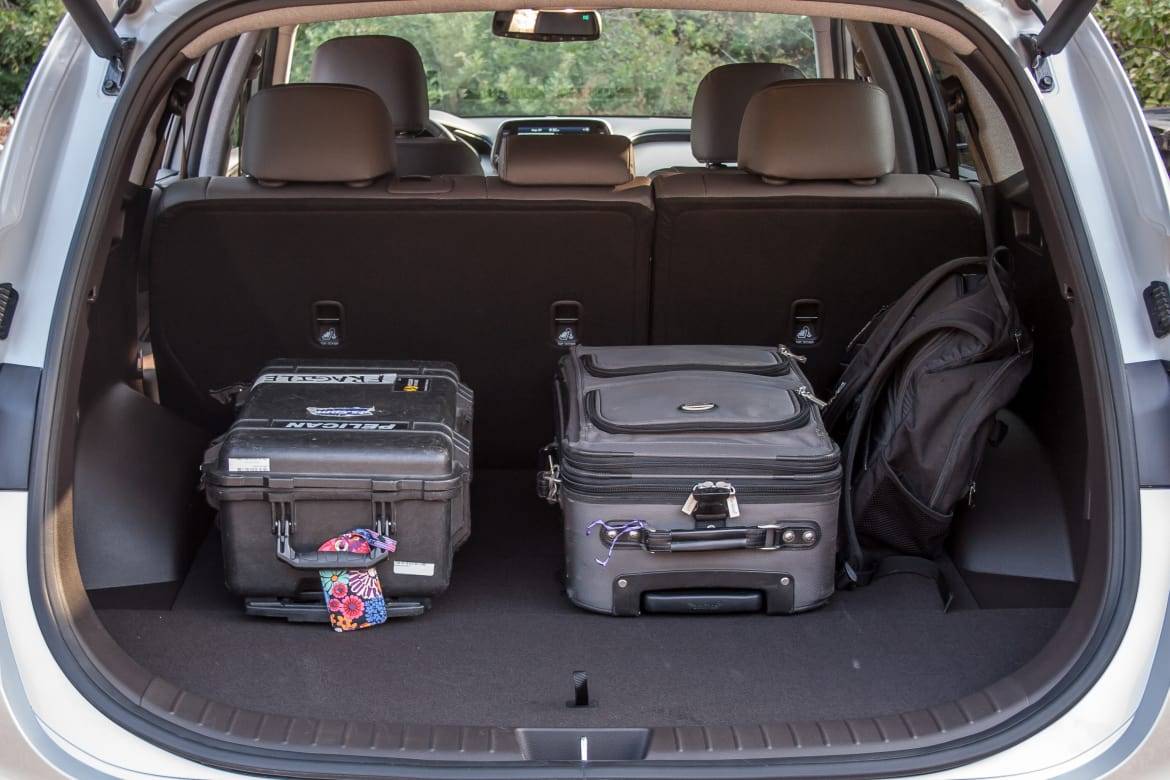 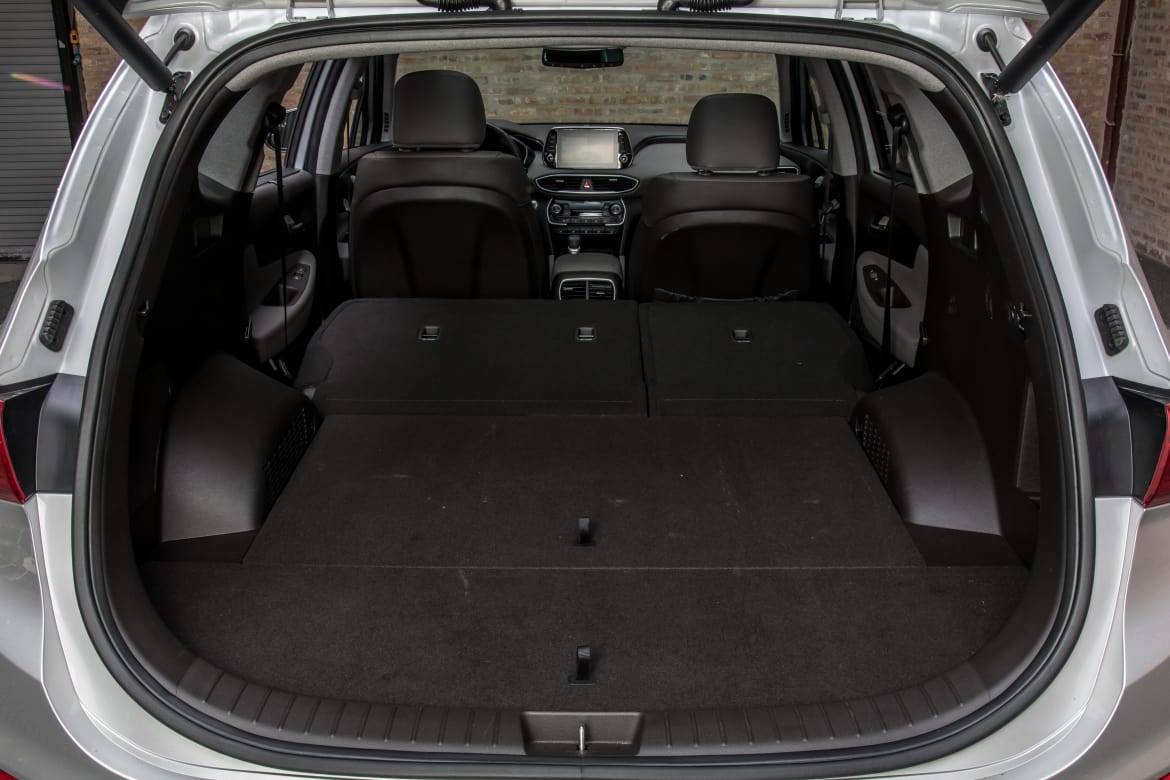 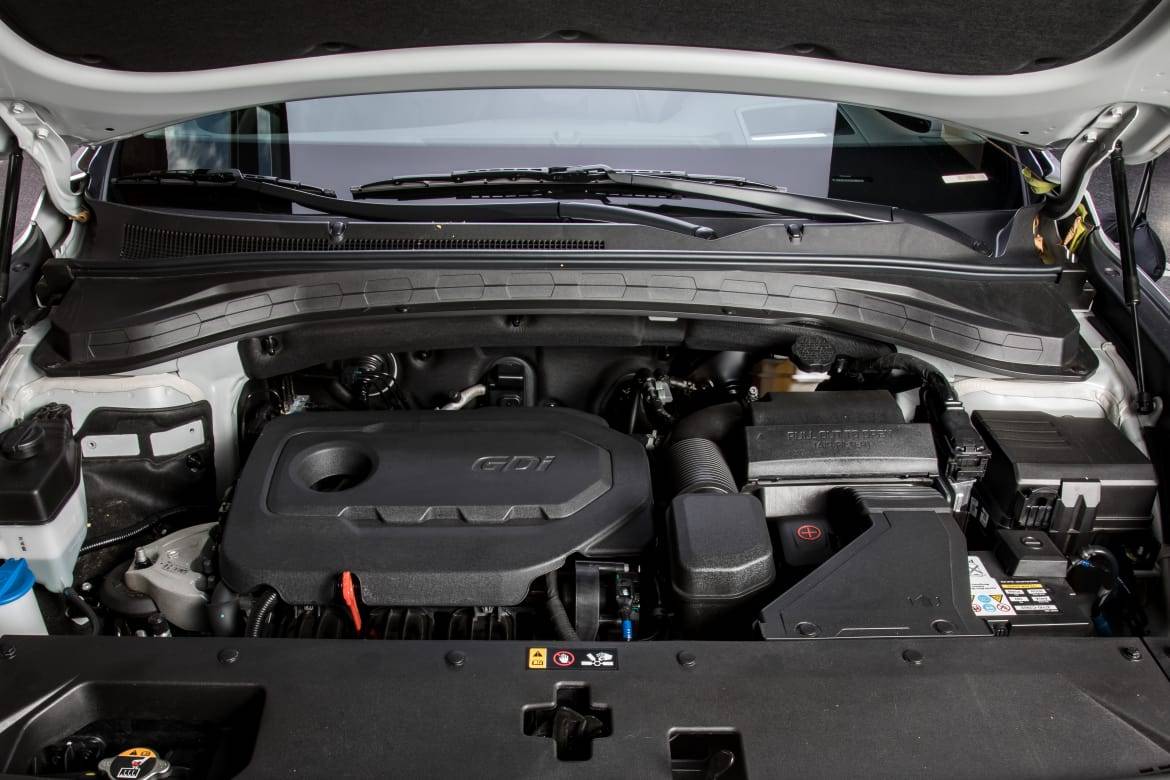 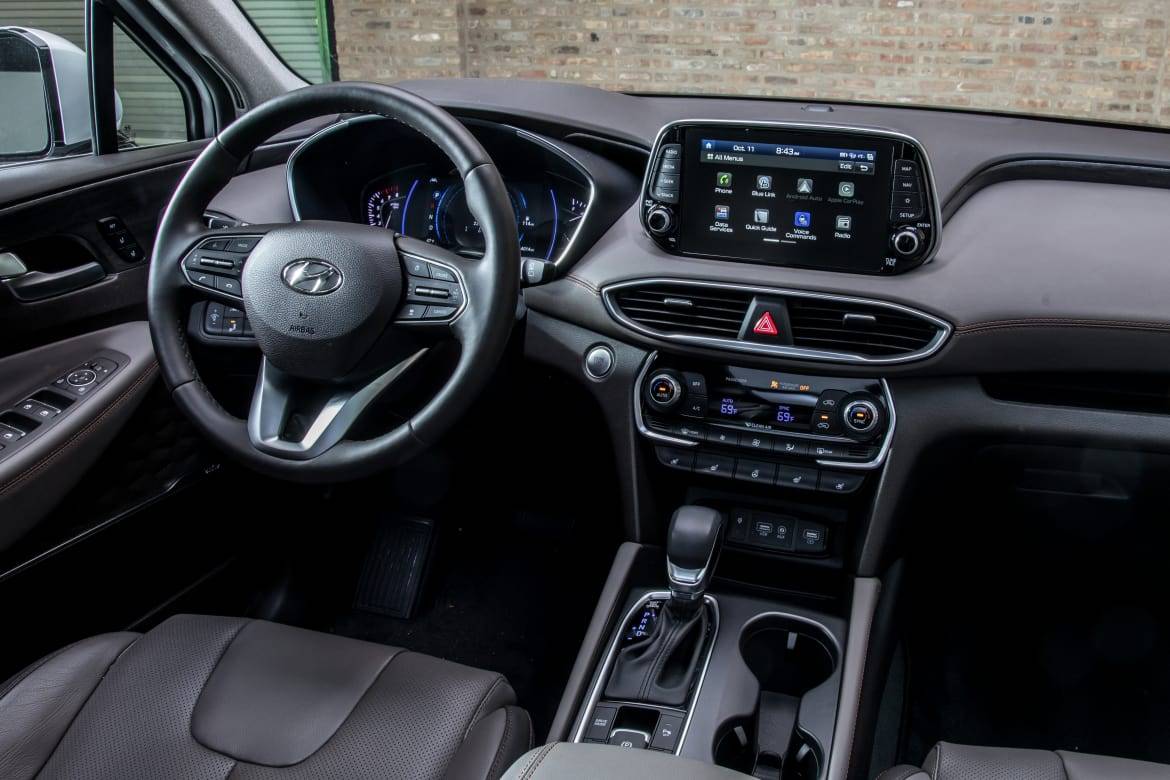 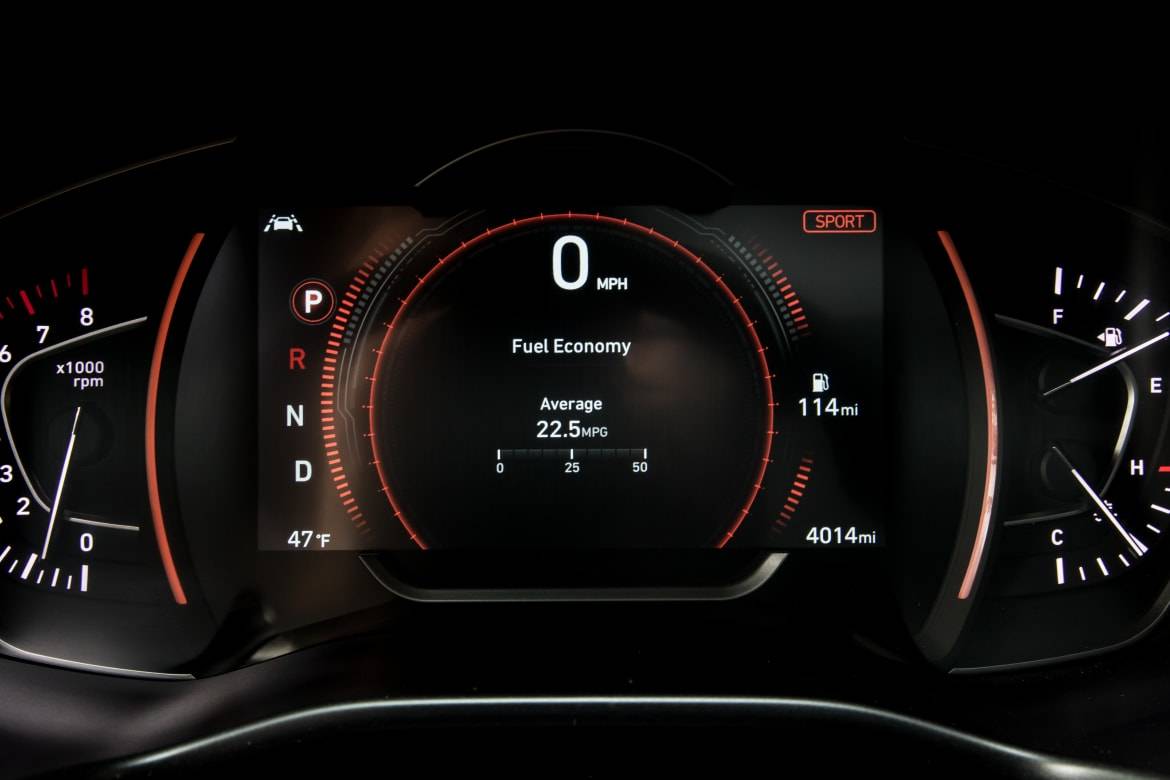 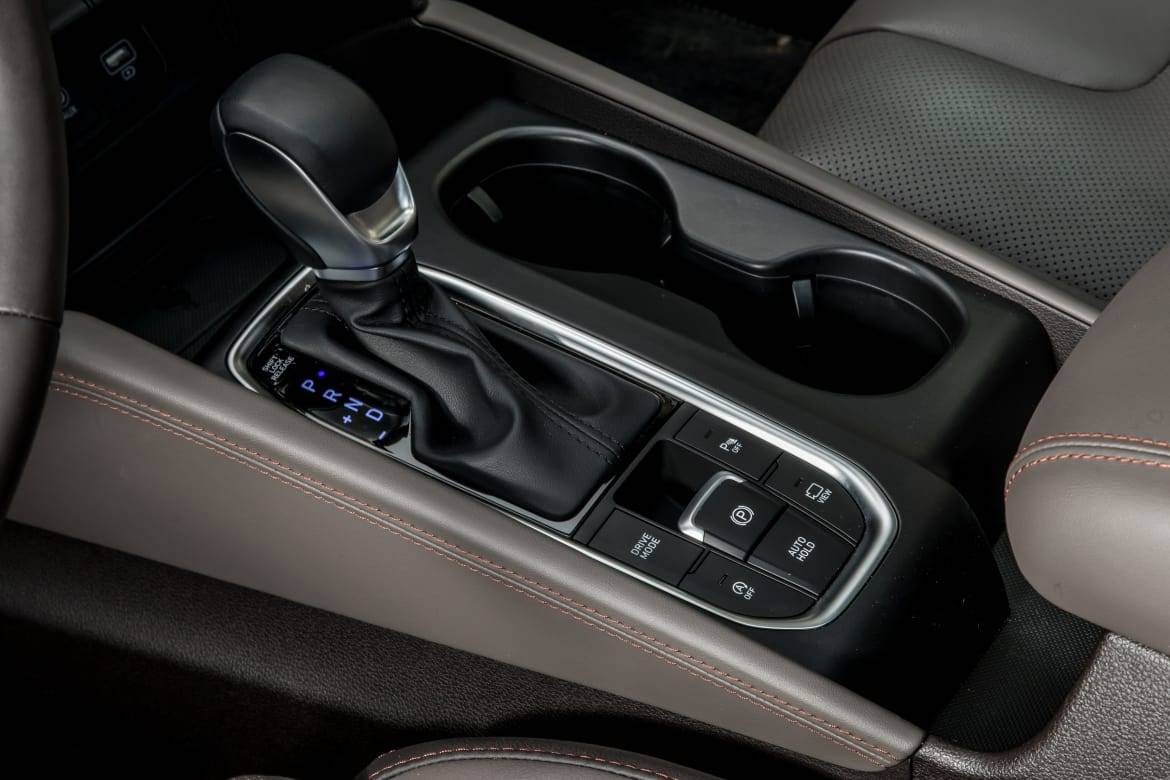 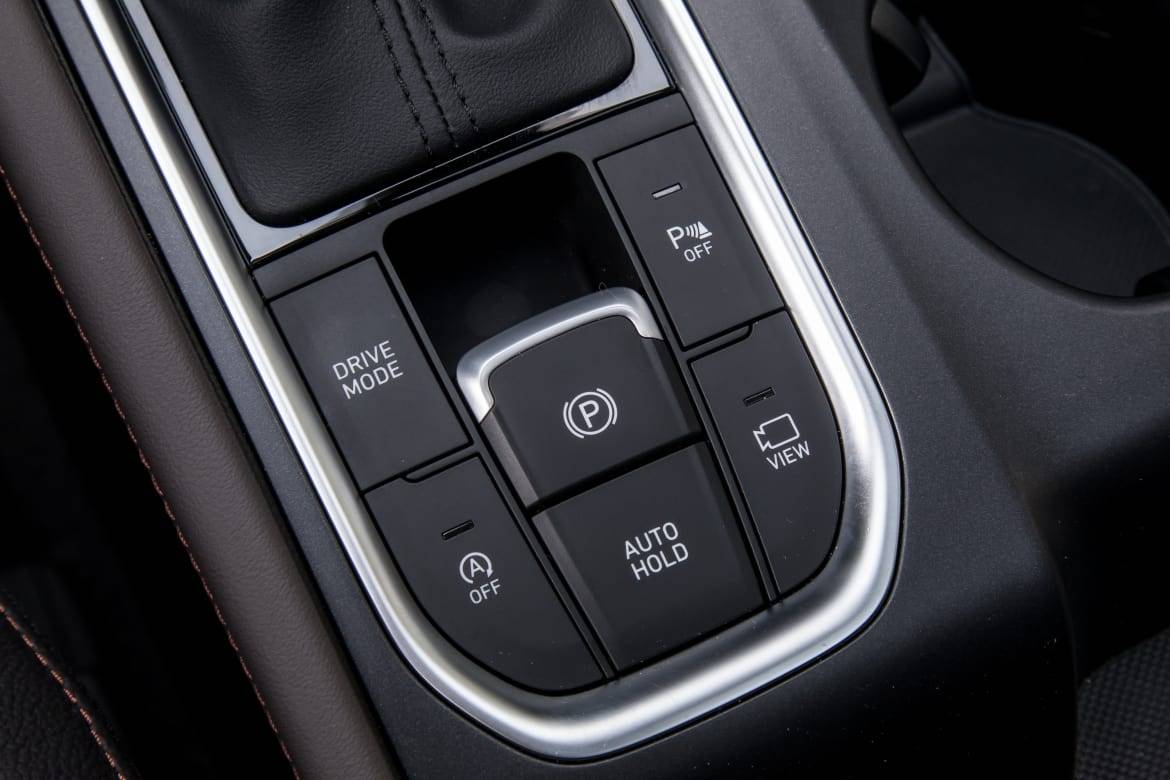 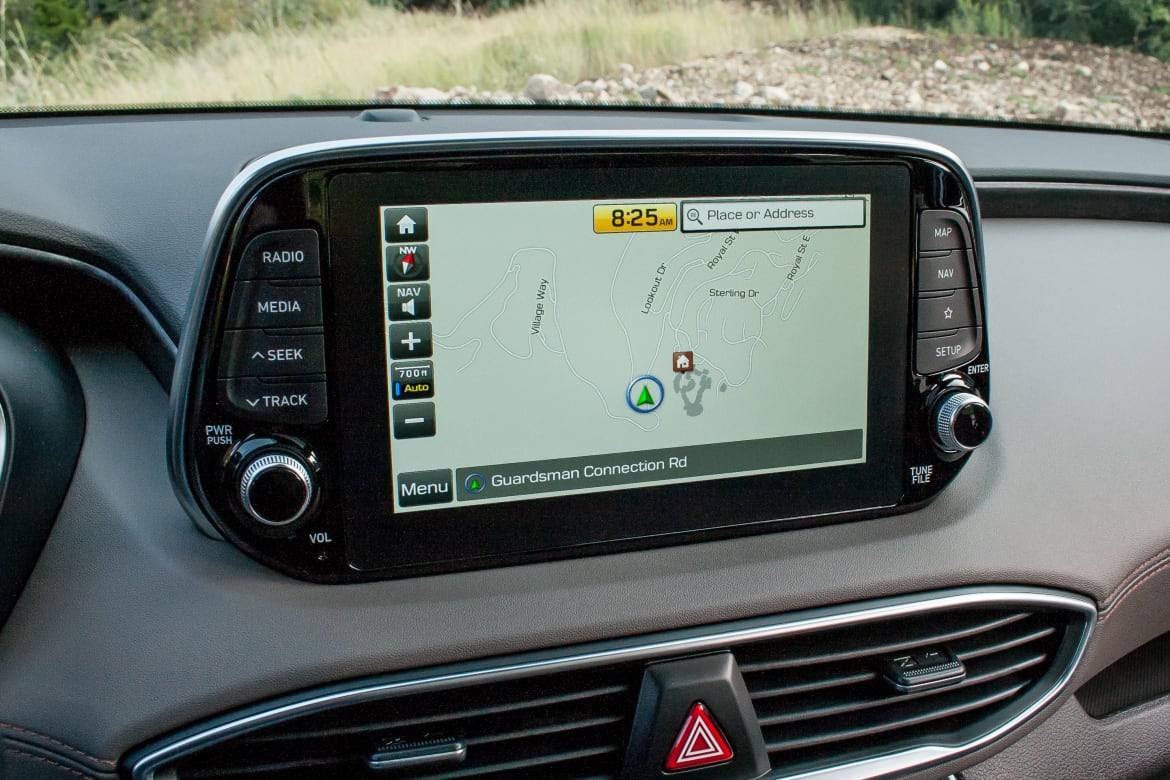 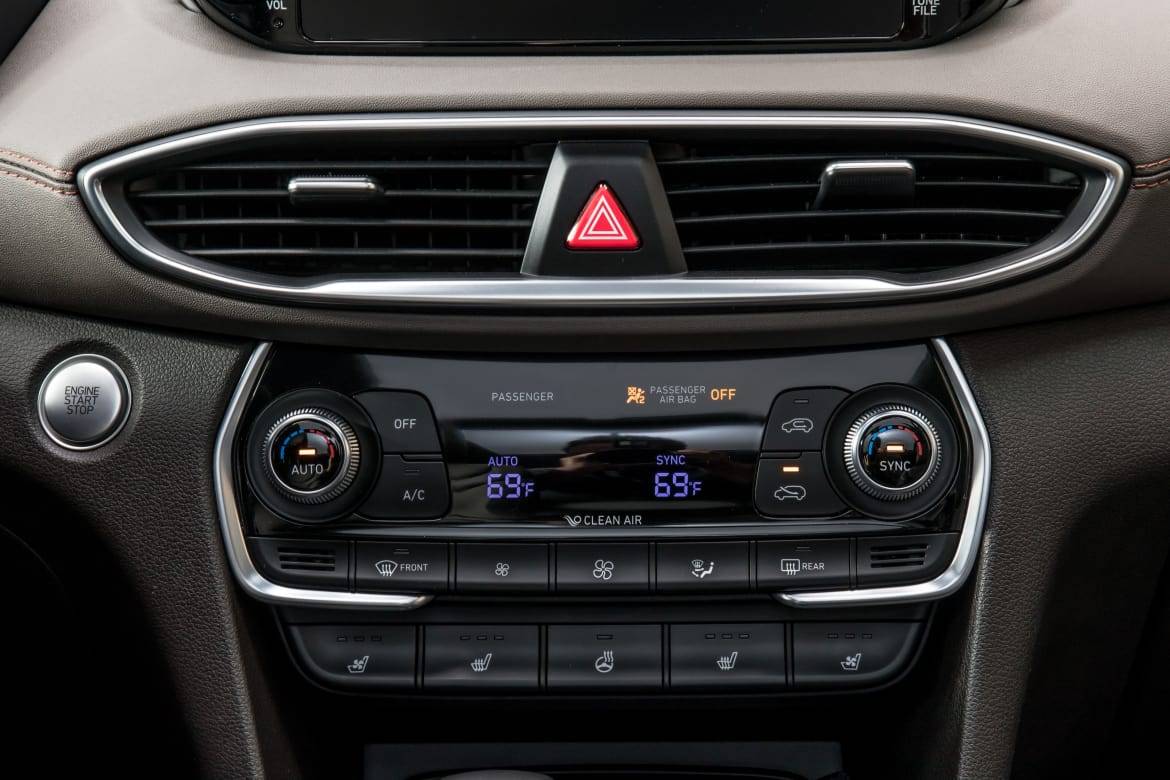 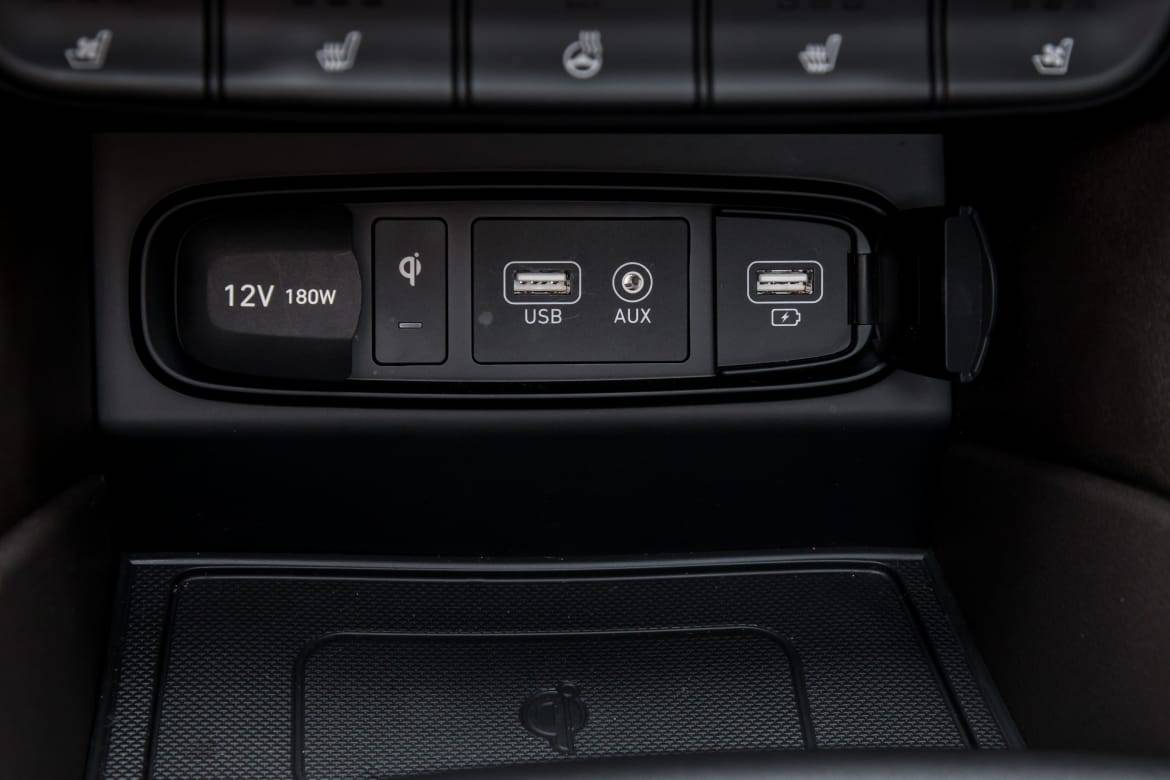 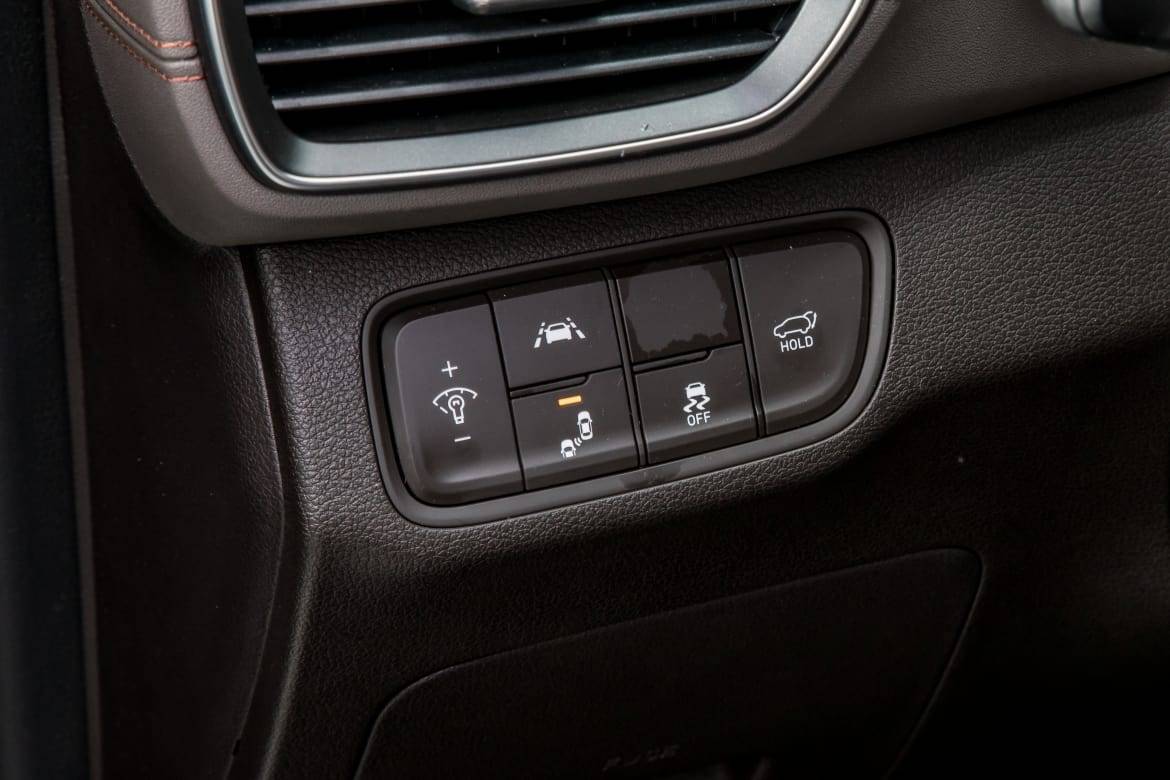 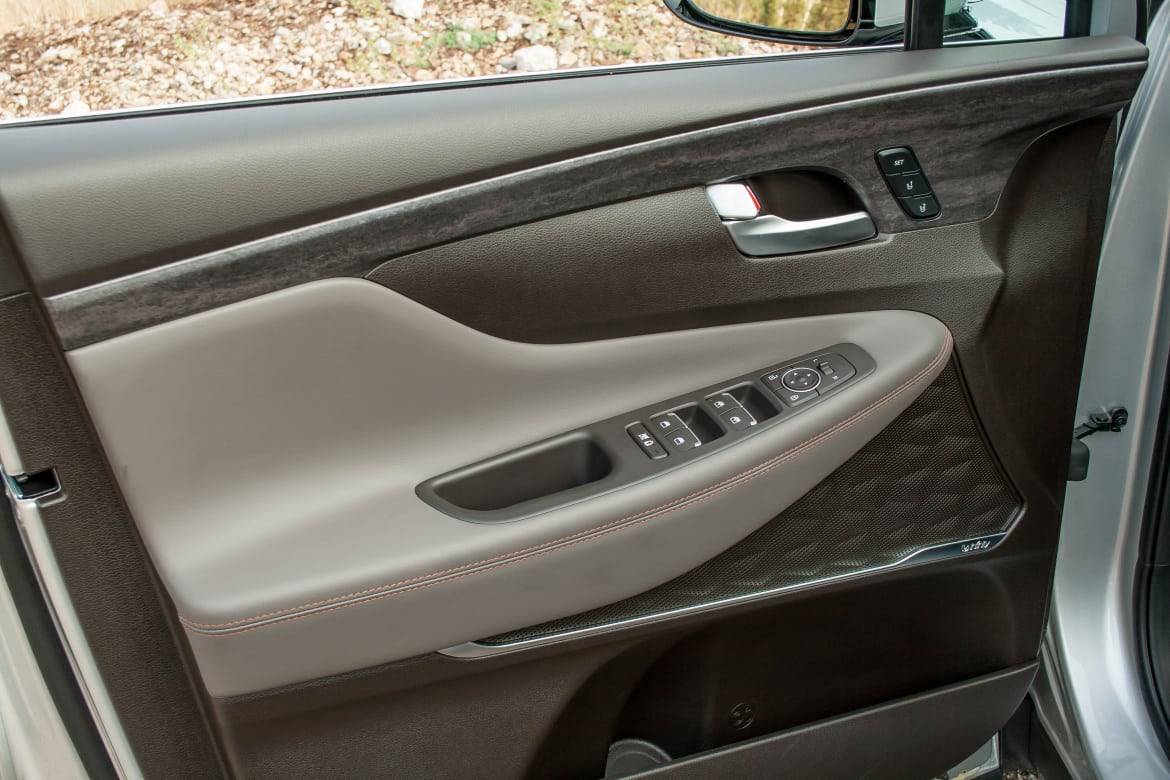 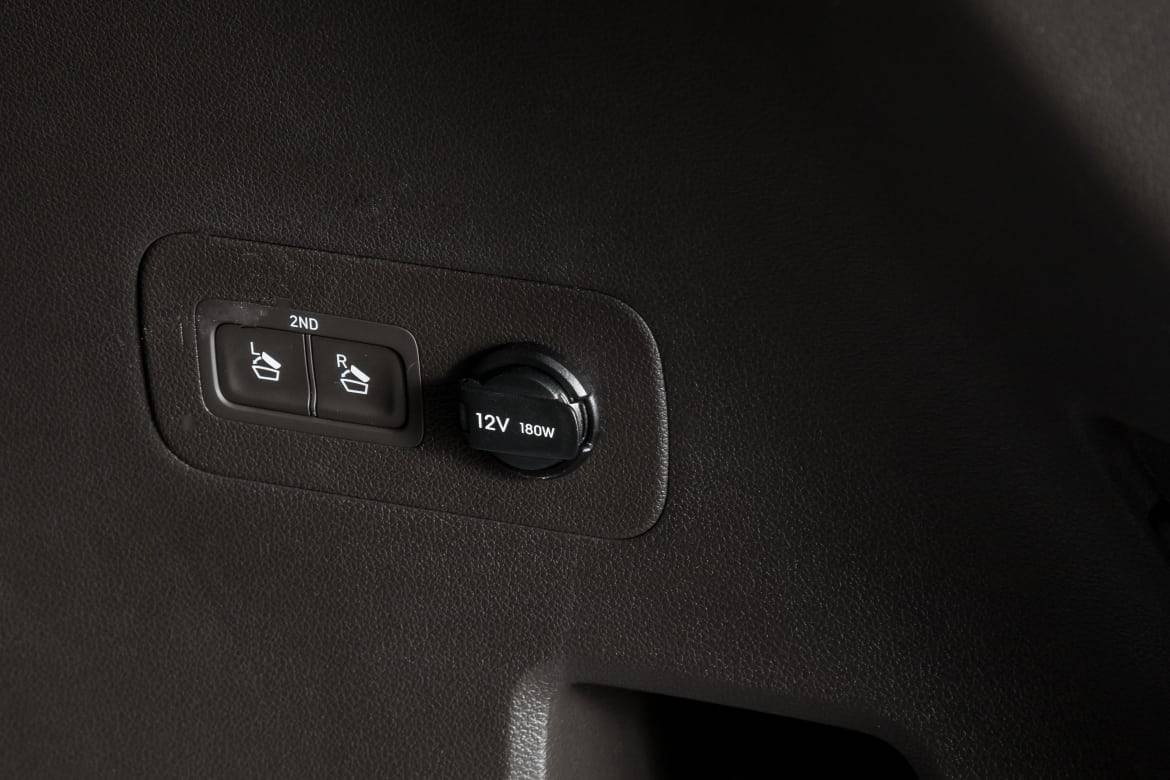 Hyundai has tinkered with the names of its mid-size and full-size SUVs for the 2019 model year. The redesigned two-row 2019 Santa Fe reviewed here replaces the Santa Fe Sport in Hyundai’s lineup, and the three-row Santa Fe has been dubbed Santa Fe XL for 2019 but is a carryover model with few changes. The Santa Fe XL isn’t long for this world, though; it’s slated to be replaced by the three-row Hyundai Palisade, which will arrive next summer as a 2020 model.

The 2019 Santa Fe’s profile looks more upright than the outgoing Santa Fe Sport’s, with a windshield that’s not as raked. It looks more like an SUV now, and one big practical advantage of the design is good visibility: Thin front roof pillars and side mirrors mounted on the front doors (rather than the base of those pillars) help give the Santa Fe great forward views. Hyundai also flattened out the SUV’s beltline, increasing visibility for rear passengers and providing better over-shoulder views for the driver.

The Santa Fe’s front end is, without question, the most polarizing aspect of the design. Like Hyundai’s subcompact Kona SUV and upcoming three-row Palisade, the Santa Fe has slim LED daytime running lights that sit below the front edges of the hood and flank a gaping grille (the headlights sit below the DRLs). It’s not a new design tactic — the pre-2019 Jeep Cherokee had something similar — but it’s an approach that’s gaining steam; the upcoming 2019 Blazer also uses it.

The Santa Fe is composed and comfortable in the city and on rural two-lane highways, but it’s flustered by more challenging, twisty roads. Some drivetrain-tuning choices also hurt the driving experience.

The standard 2.4-liter four-cylinder engine makes adequate power, but full-throttle acceleration is modest. The engine works with an eight-speed automatic transmission that kicks down quickly but isn’t always willing to select as low a gear as is needed.

Gas-pedal response is gradual in the Comfort drive mode, but you get used to it after a while. The Sport mode, however, isn’t great in everyday driving; it makes the gas pedal extremely sensitive, to the point that it’s hard to accelerate smoothly or hold a steady speed.

The optional turbo 2.0-liter four-cylinder performs very well. It’s smooth and produces a lot of midrange power that helps the Santa Fe build speed rapidly. It’s also quieter than the base four-cylinder. Still, passing power is modest with this engine, too, and the automatic transmission’s unwillingness to kick down into its lower gears is partly to blame. Gas-pedal responsiveness is an issue with the turbo engine, as well; there’s some lag when starting off from a stop regardless of whether you’re in Comfort or Sport. Once you’re moving, the gas pedal can feel a bit too responsive, with a jumpiness that makes accelerating smoothly more difficult than it should be.

The Santa Fe’s suspension is comfort-oriented without feeling floaty, which seems like the right approach for this class. It feels composed and stable through sweeping corners, but handling suffers on more challenging roads due to numb, isolating steering feel and moderate body roll in tight corners.

Hyundai touts the Santa Fe’s variable-density front seats, which use three types of cushioning. The seats are wide and supportive, but the cushions felt a little flat. Cloth upholstery is standard, and leather seating surfaces and heated front seats are included on Limited and higher trims.

The 60/40-split backseat is comfortable for adults. There’s good legroom, and the seat cushion is high enough off the floor to provide thigh support — an attribute that’s gradually vanishing across the market. On SEL Plus and higher trims, the seat slides forward and backward to balance cargo and passenger needs. The rear backrest reclines quite a bit, which gives stargazers a good view out the optional panoramic moonroof.

Materials quality in the high-end Ultimate trim is good, and the controls are sensibly arranged. The dashboard’s separated sections are intuitive, with a standard 7-inch touchscreen positioned above the center vents and air-conditioning controls, but the optional dual-zone automatic air-conditioning system’s temperature display is hard to read if viewed through polarized sunglasses.

SEL Plus and higher trims also have Hyundai’s Rear Occupant Alert system. It monitors the backseat using a sensor, and if movement is detected after the SUV has been locked, the horn honks and the Hyundai Blue Link system sends an alert to a paired smartphone. While safety technology like this is welcome, we still recommend that drivers traveling with small children place in the rear seat something they plan on taking with them at the end of the trip, like a backpack or purse, to help minimize the chances a child is accidentally left inside.

Hyundai has long been known for giving shoppers a lot for their money, and the redesigned Santa Fe reinforces that reputation with its long list of standard active-safety and technology features at a starting price thousands of dollars less than some competitors. There’s a lot here to like — especially if the drivetrain quirks aren’t deal-breakers for you.