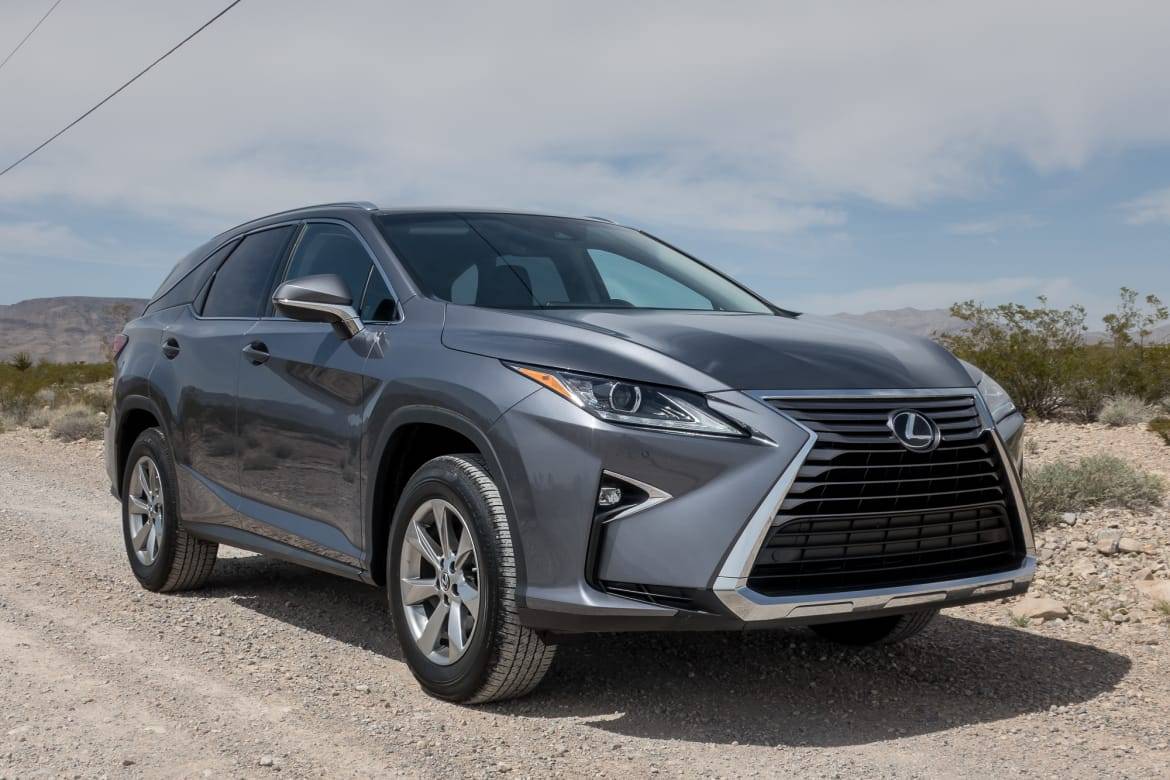 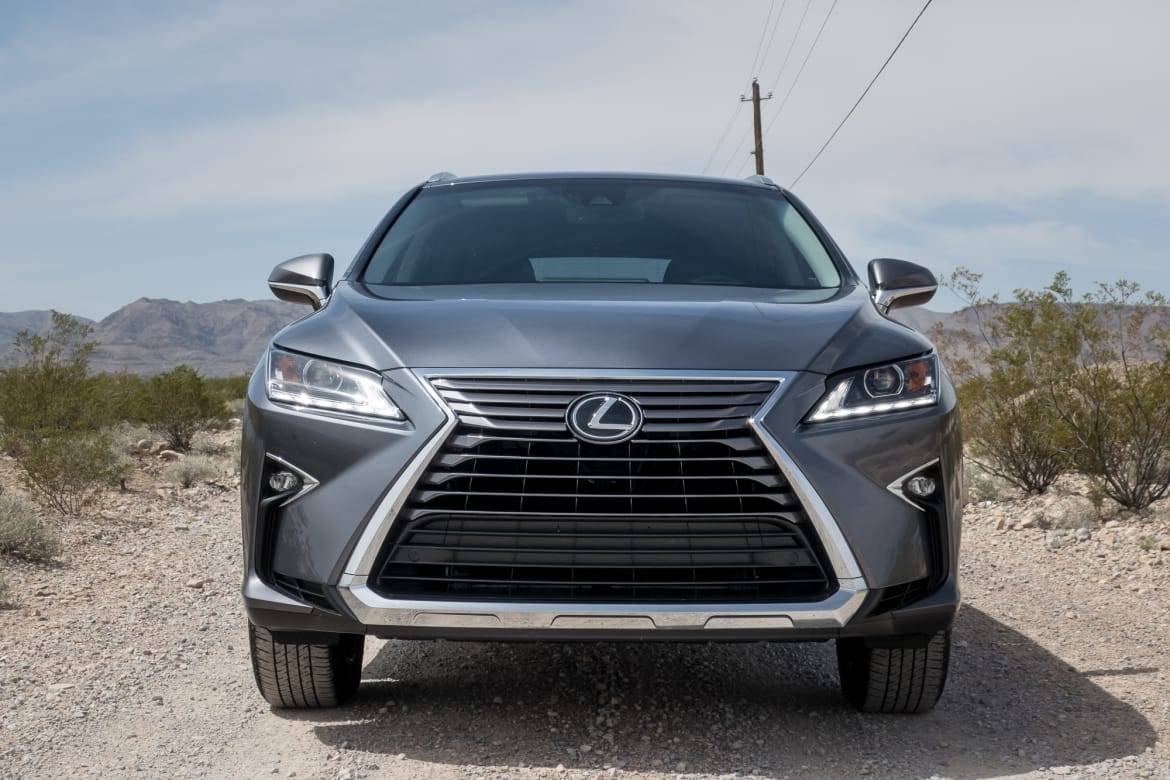 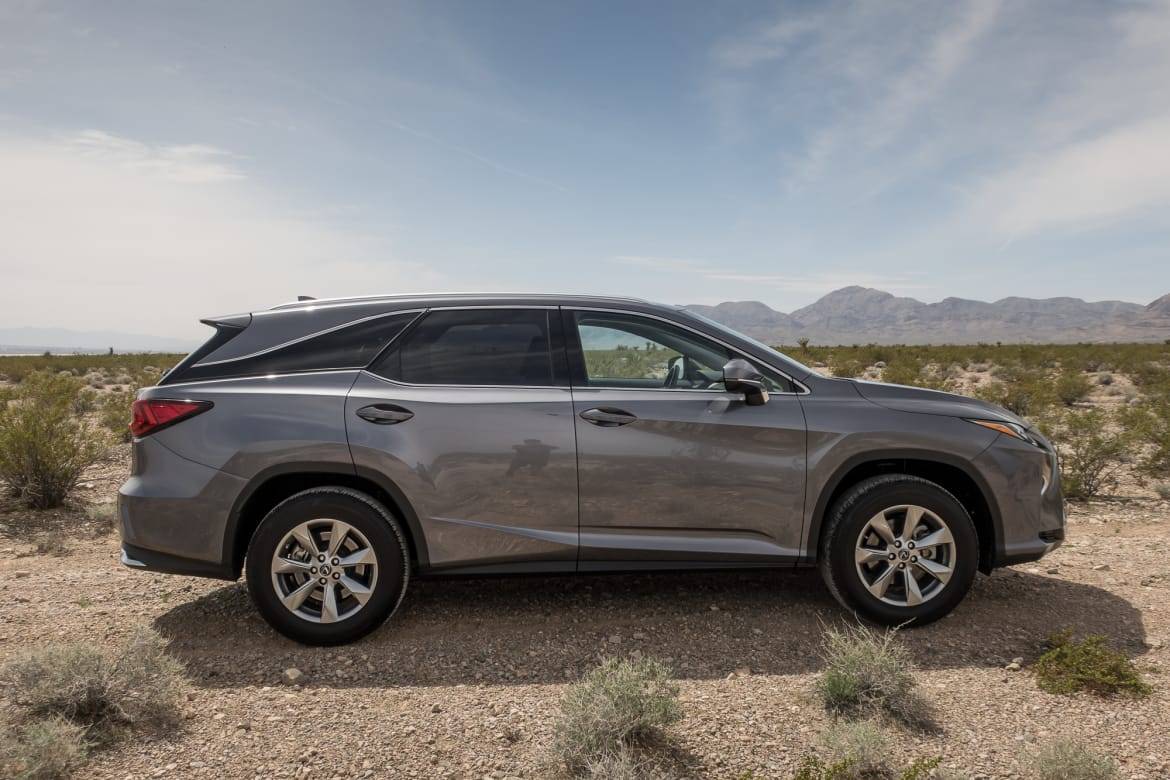 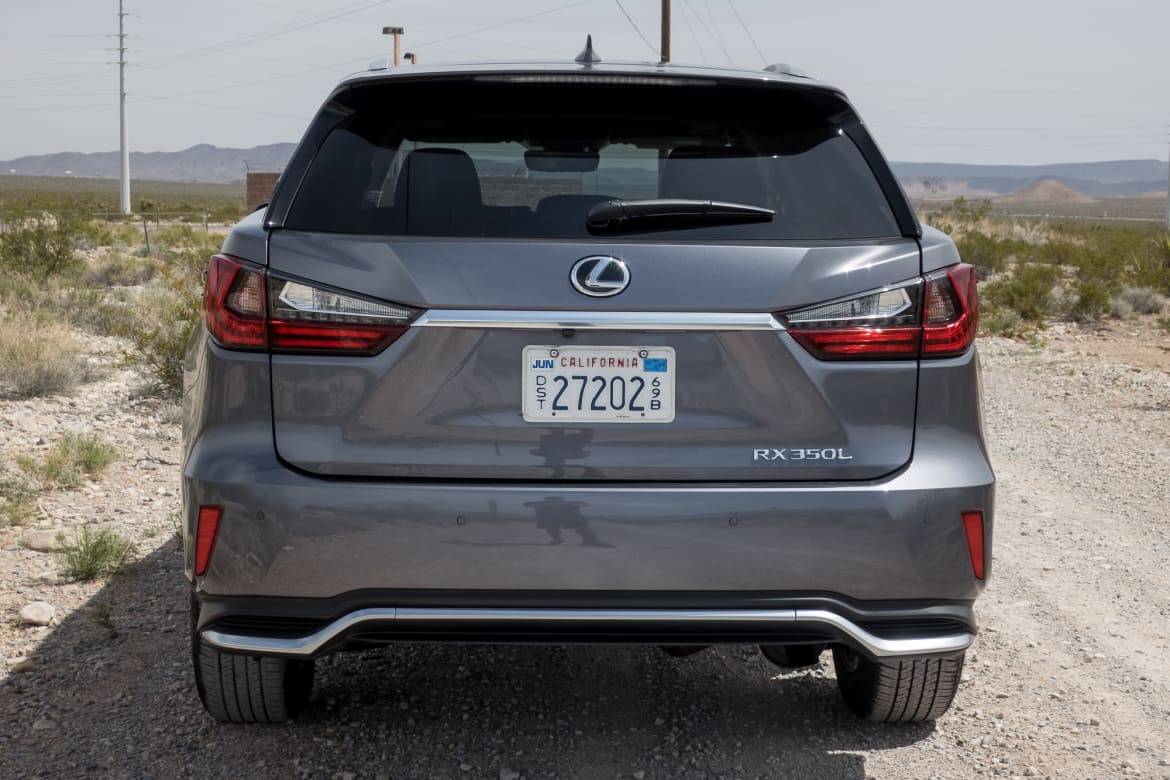 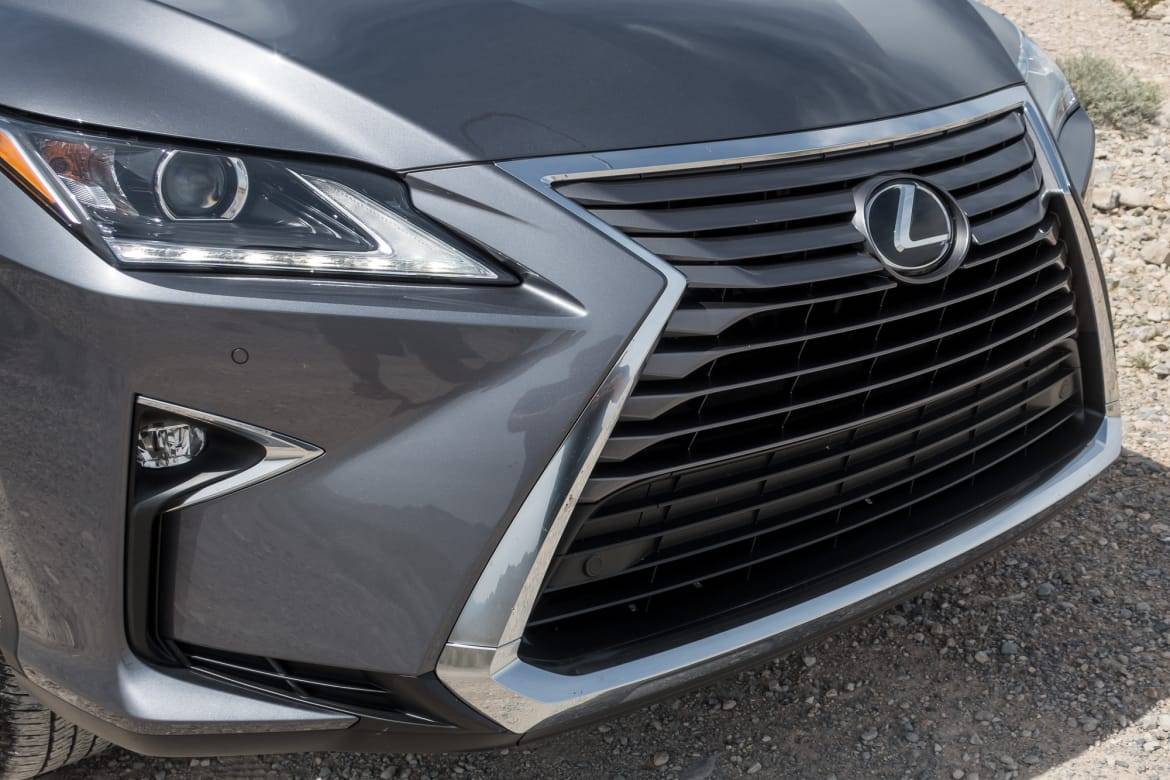 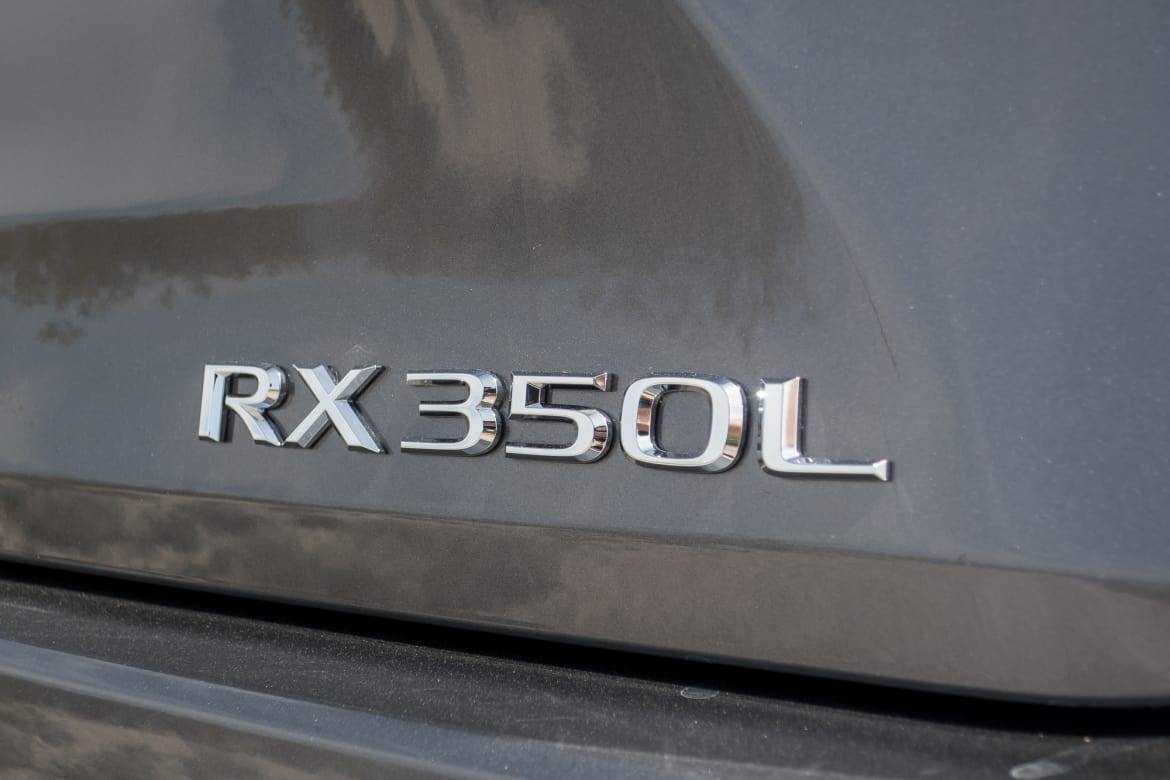 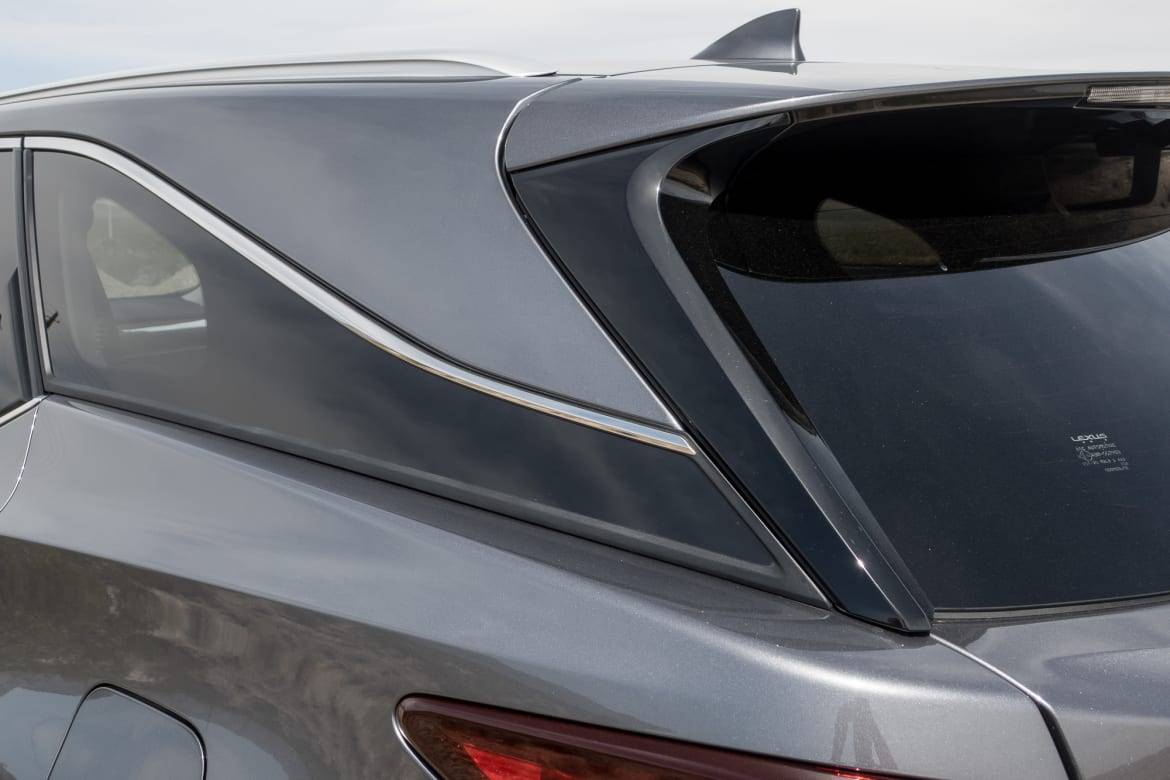 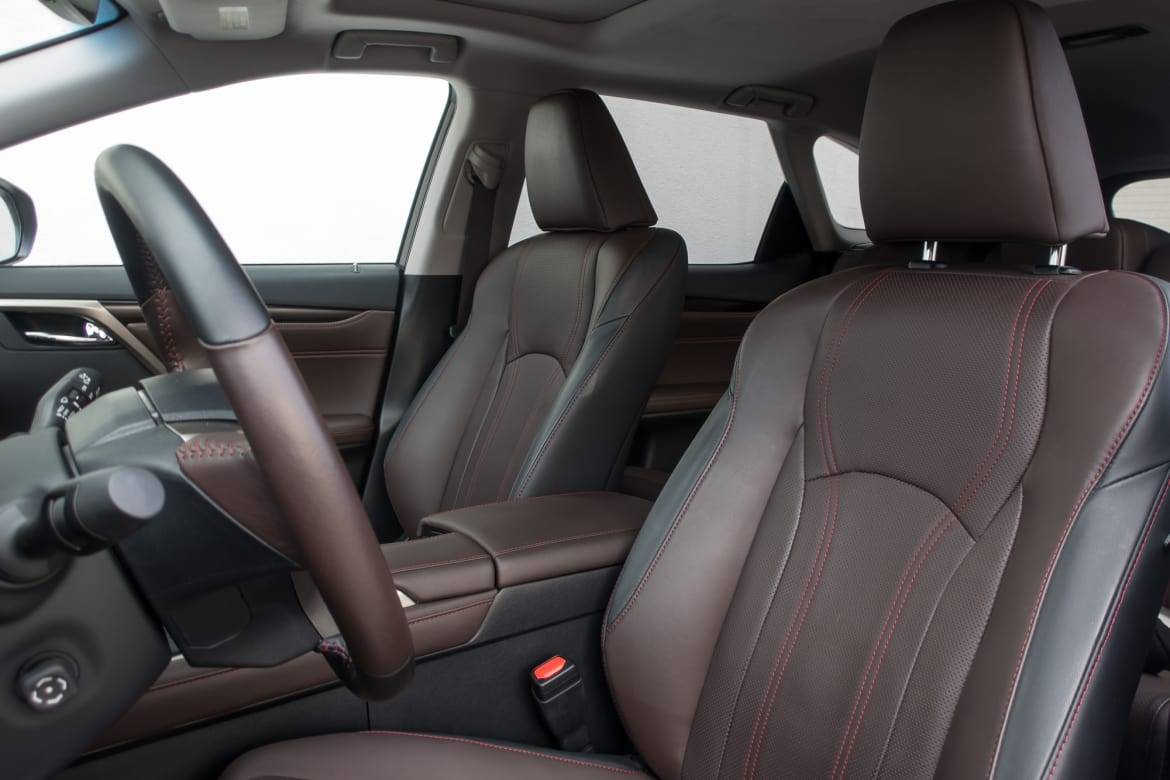 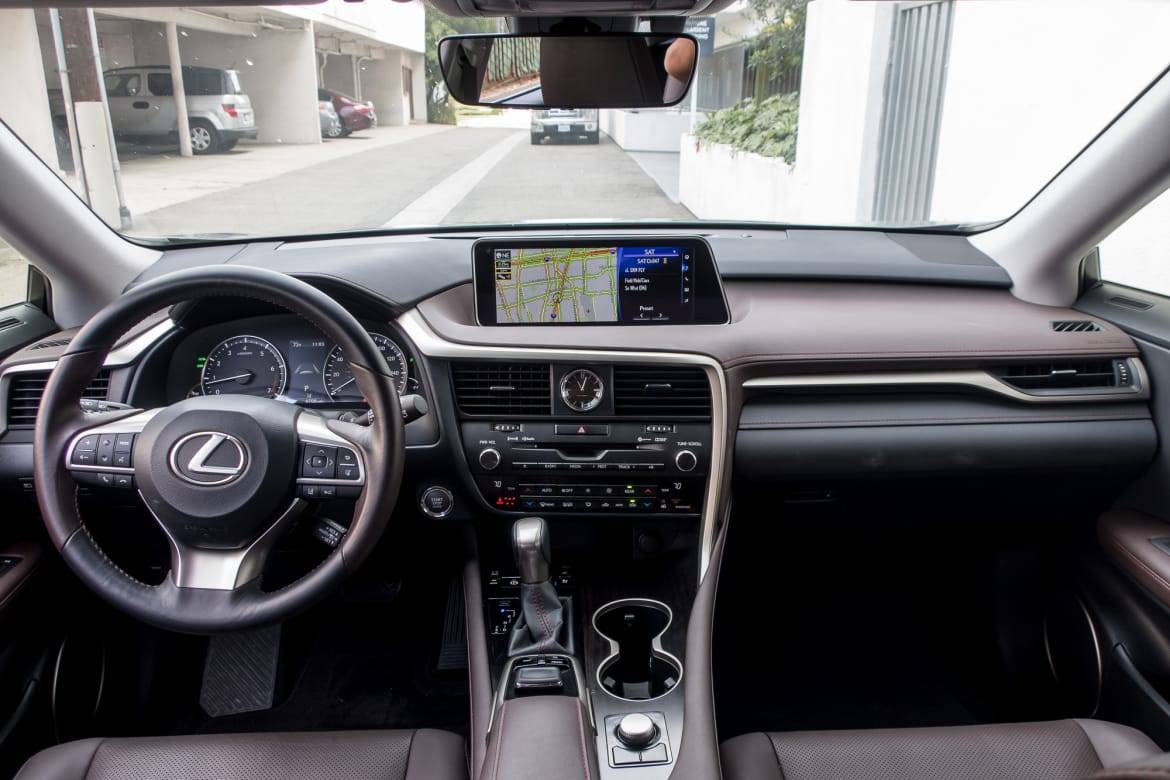 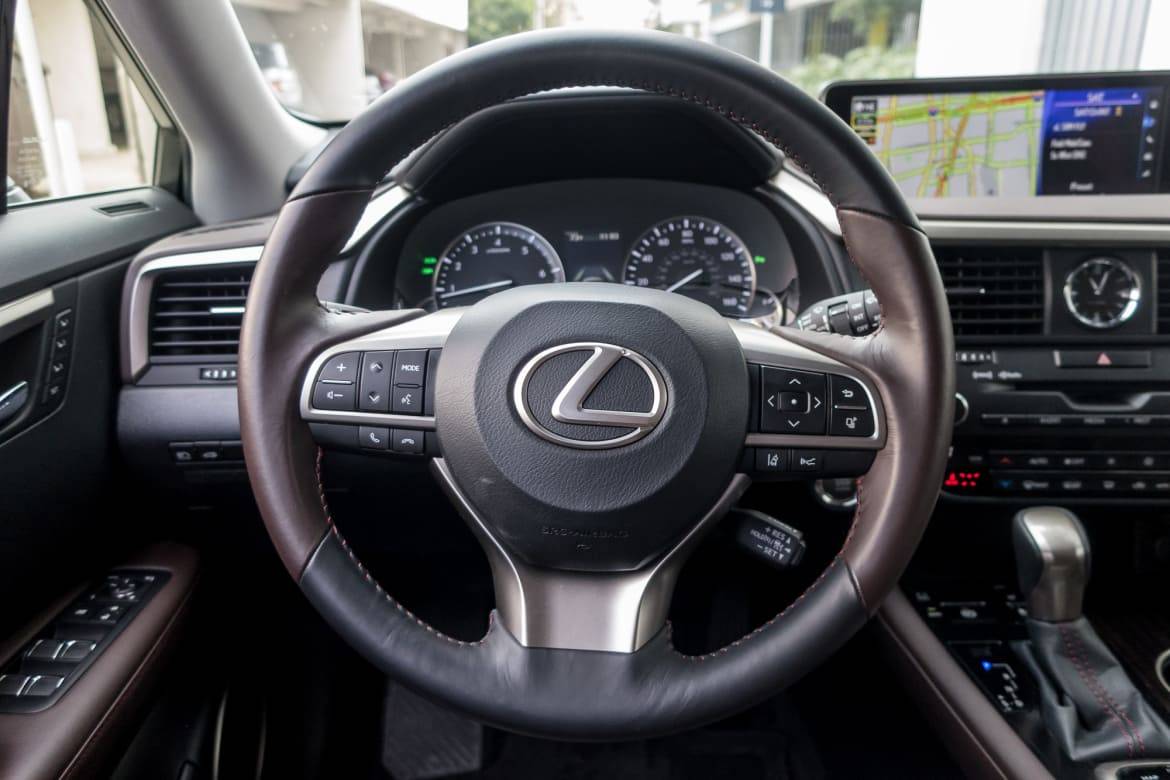 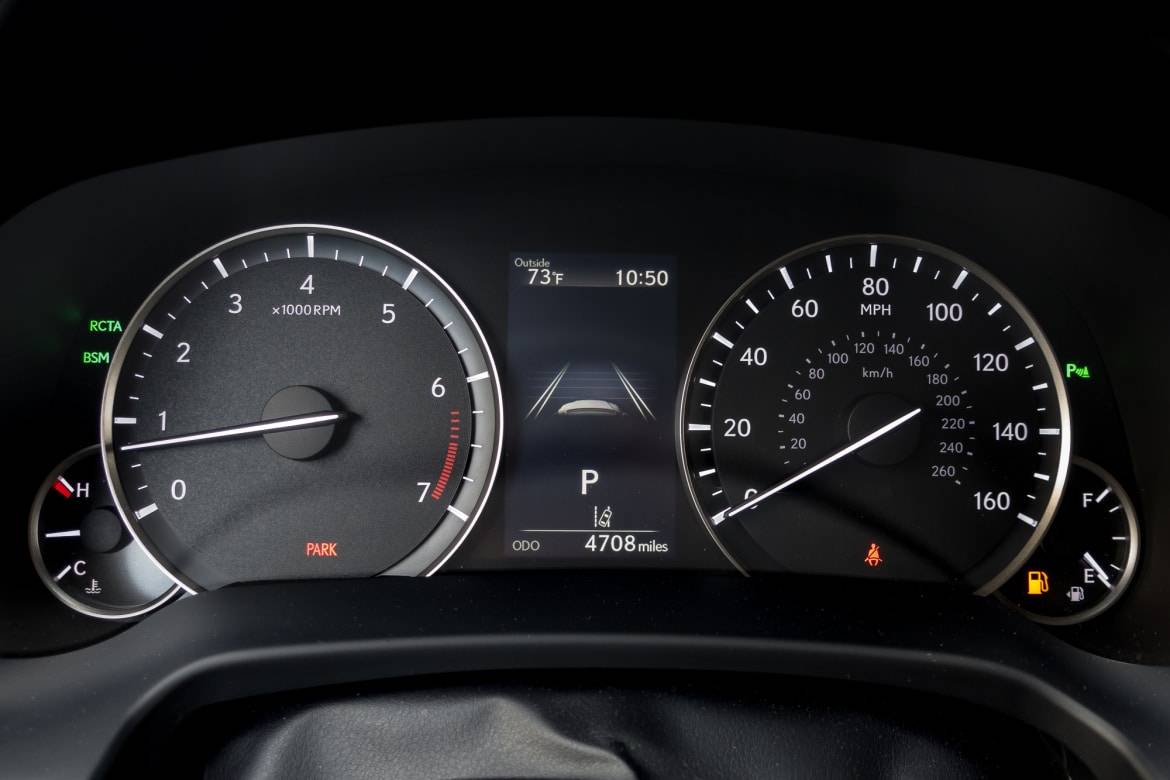 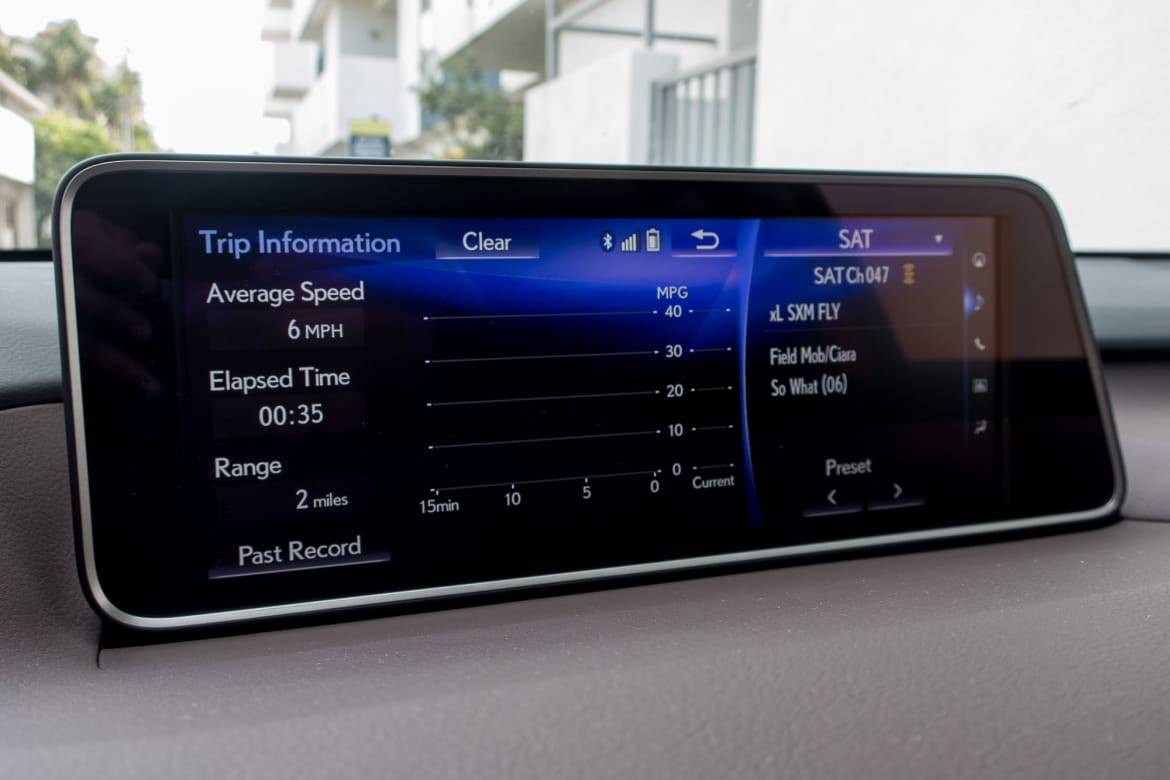 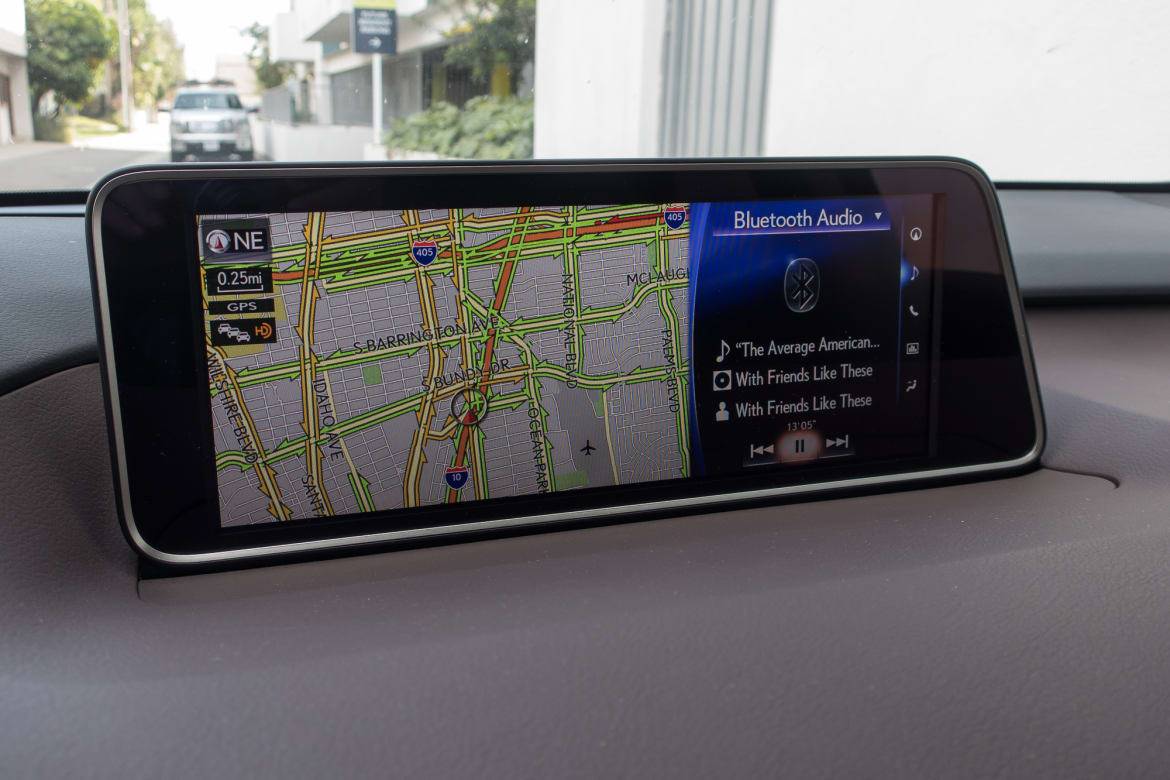 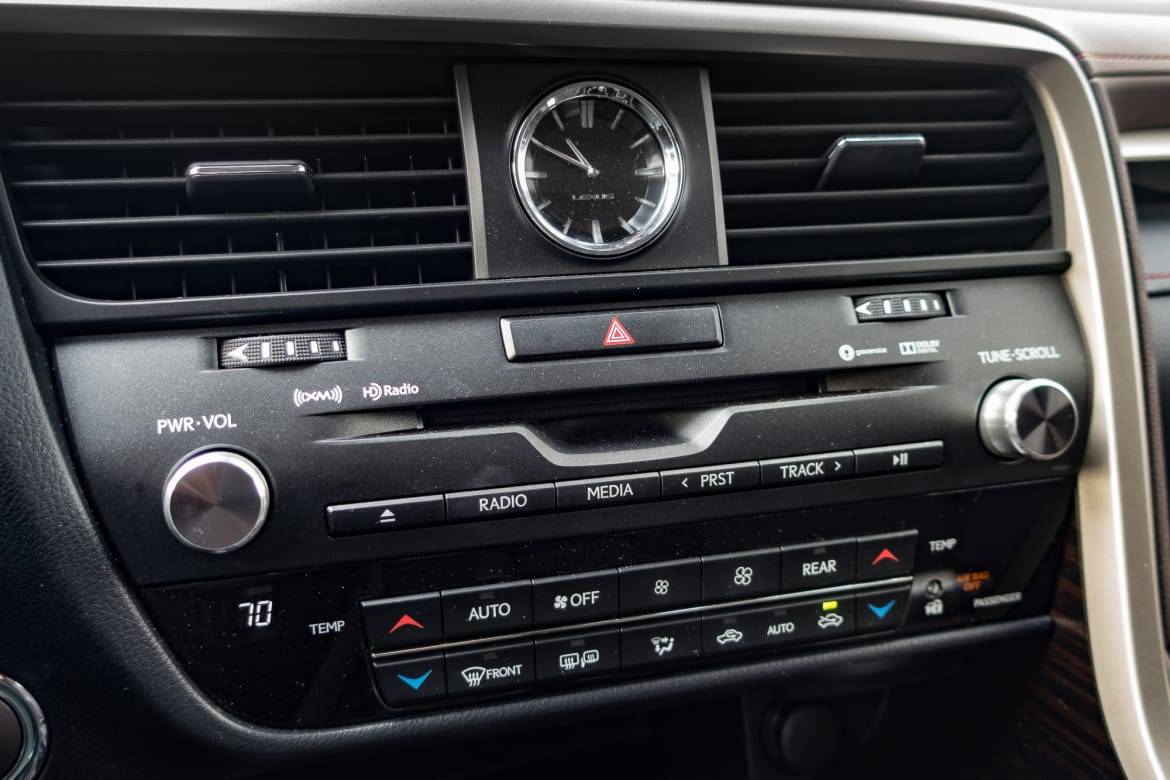 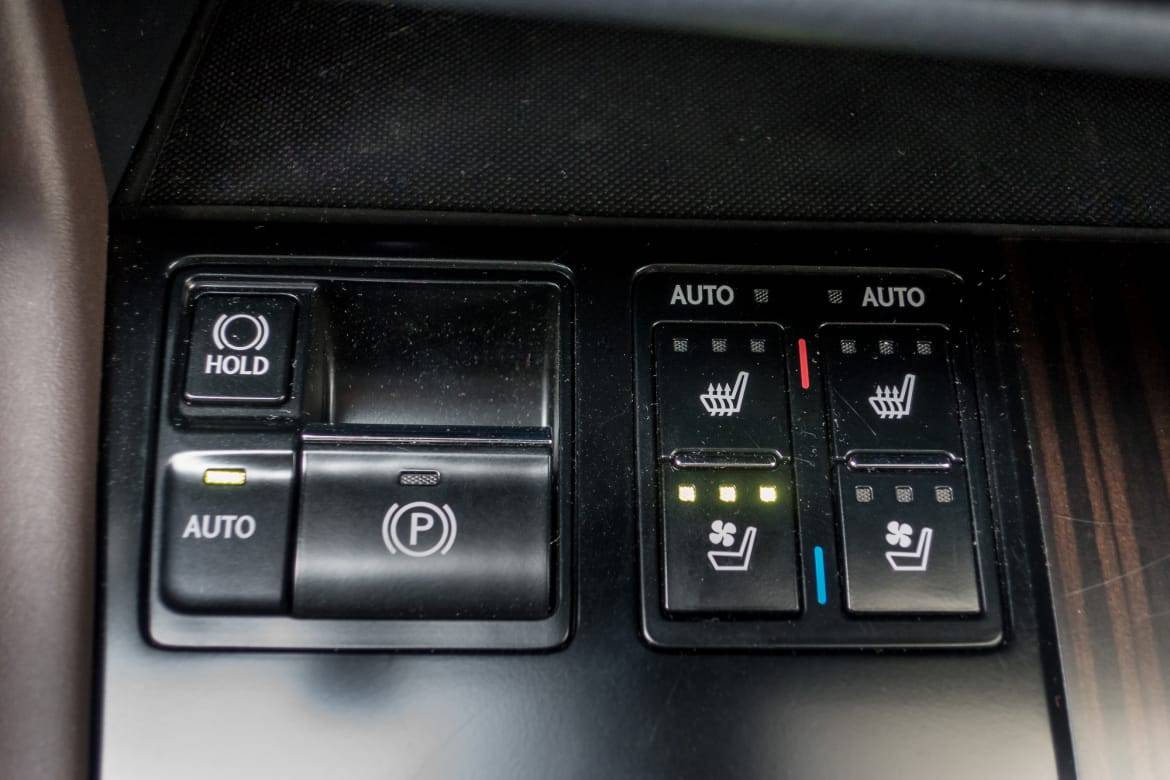 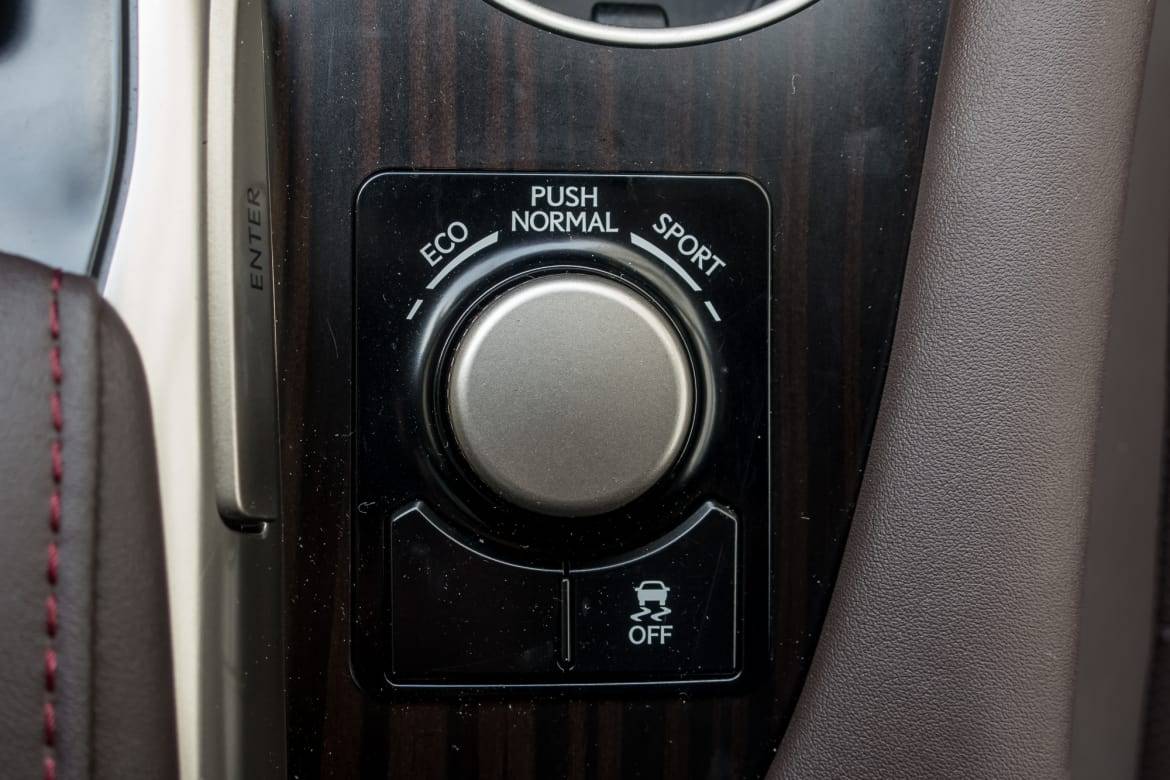 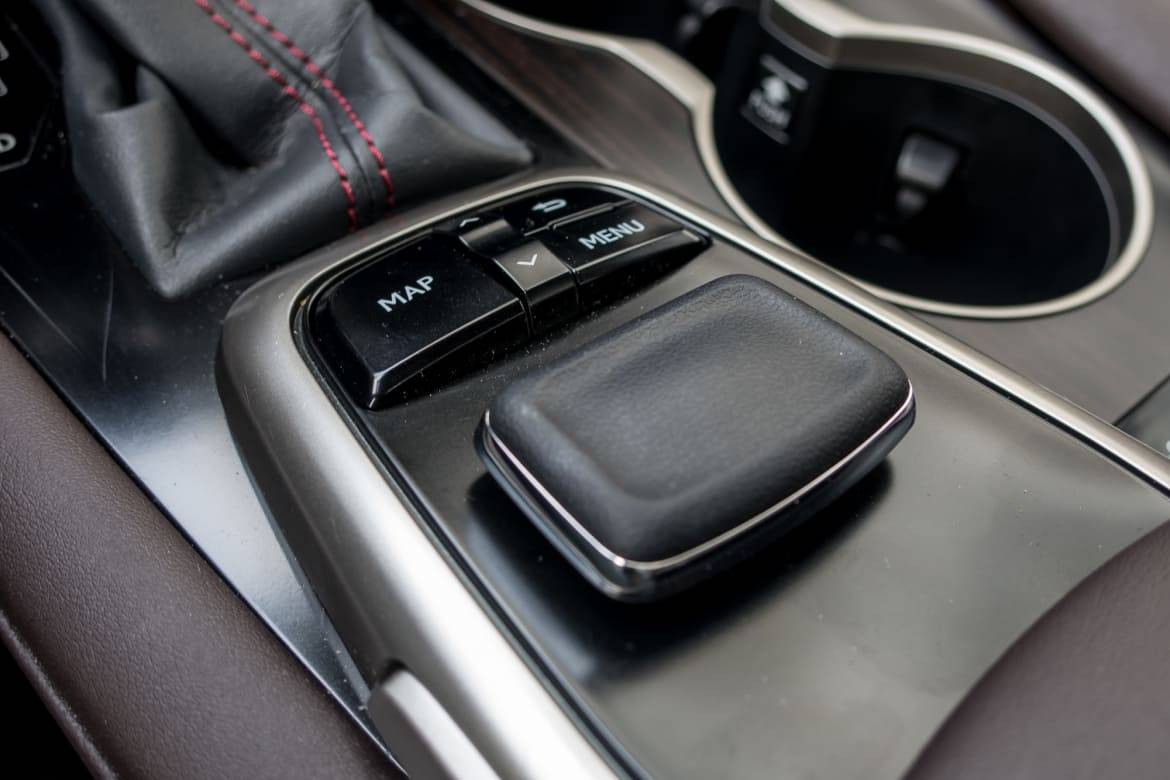 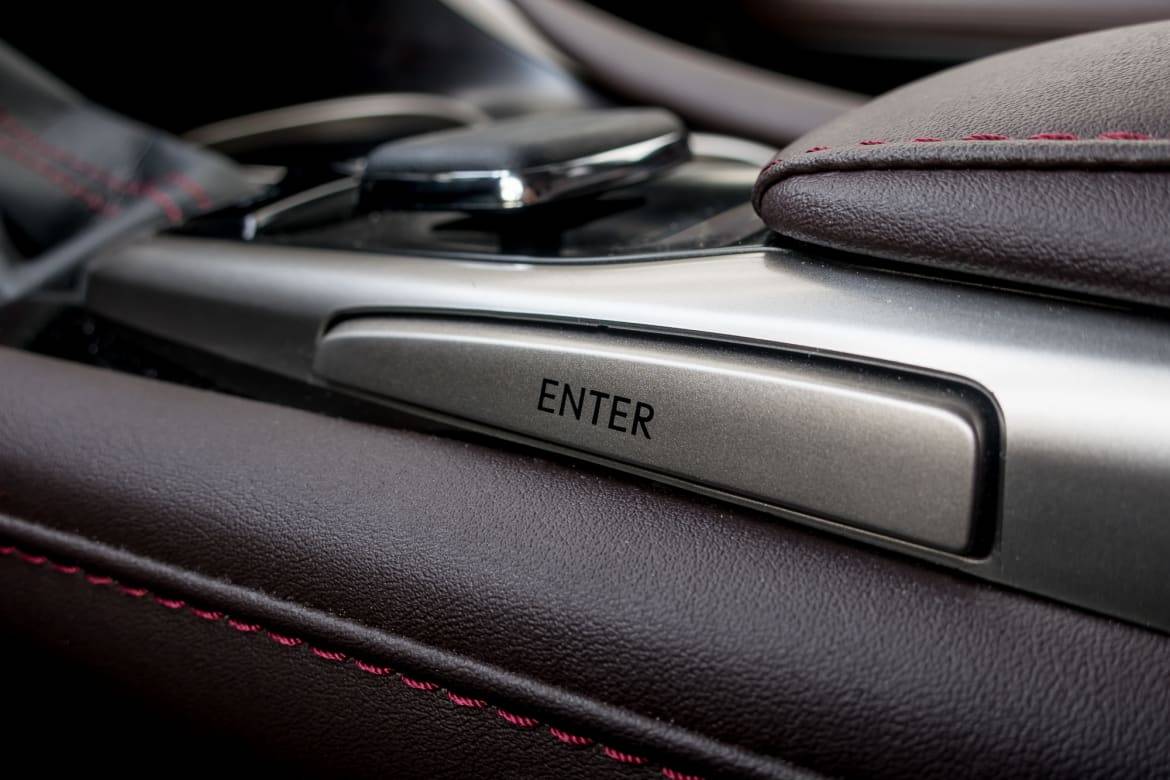 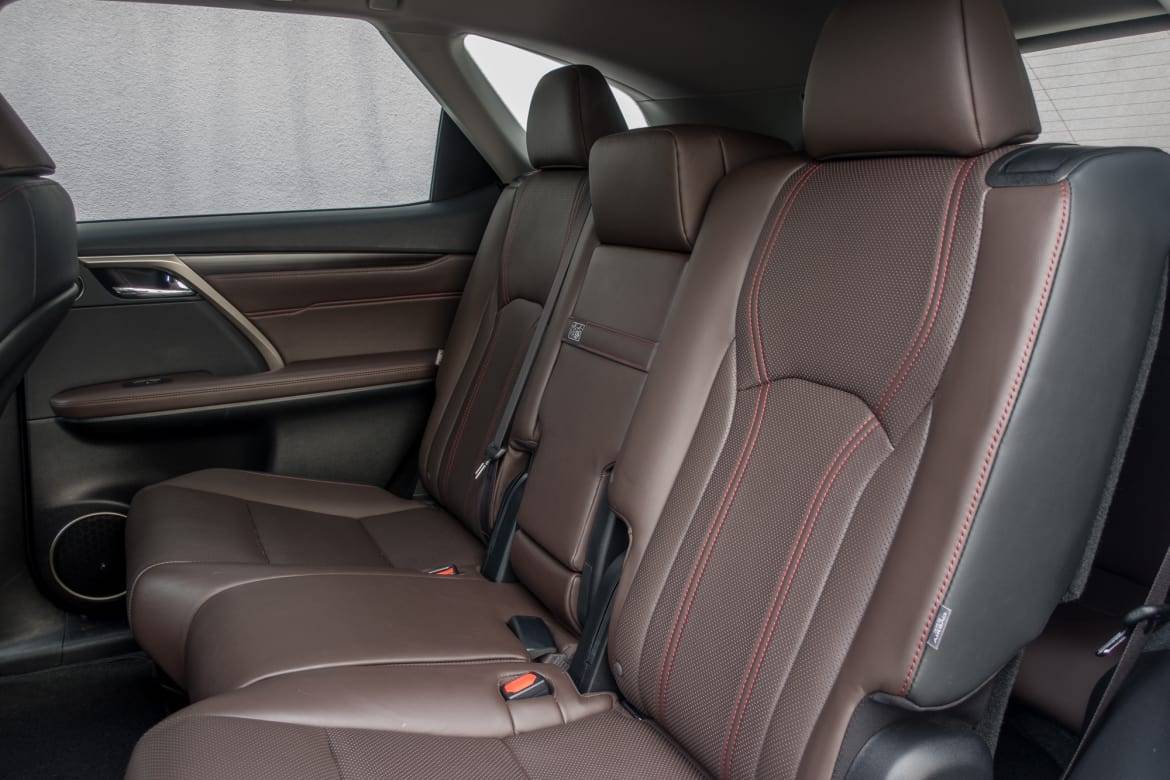 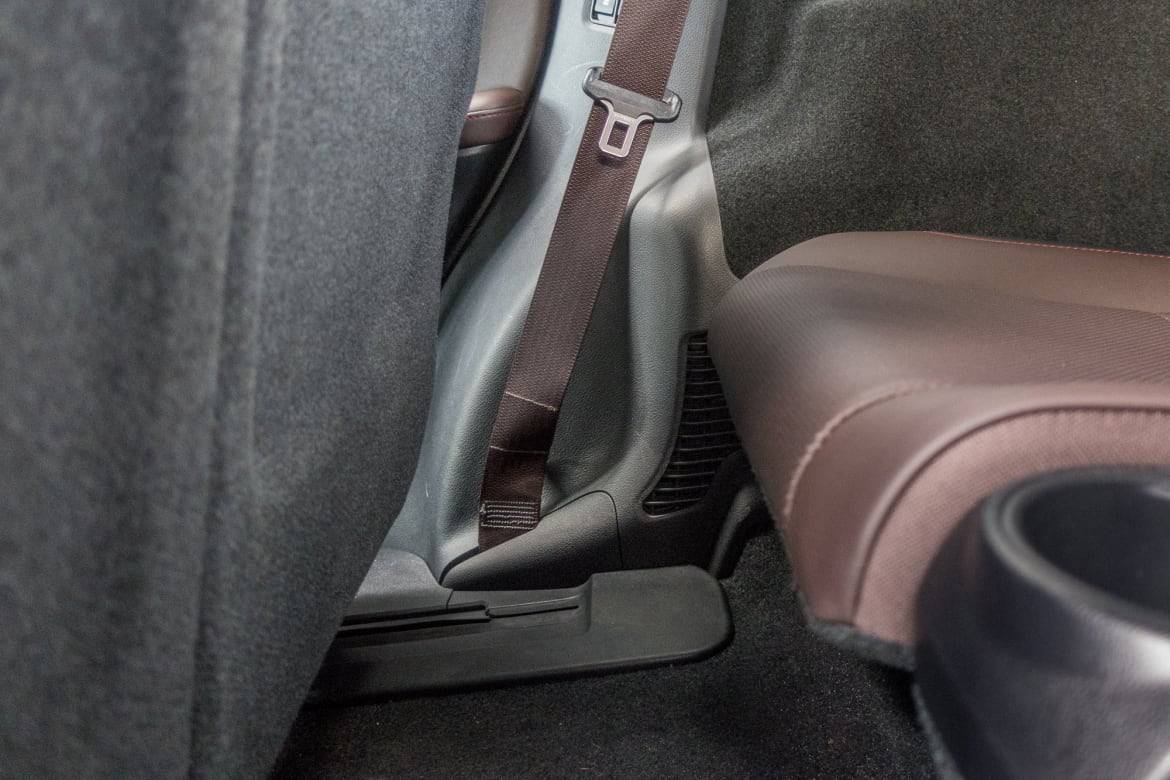 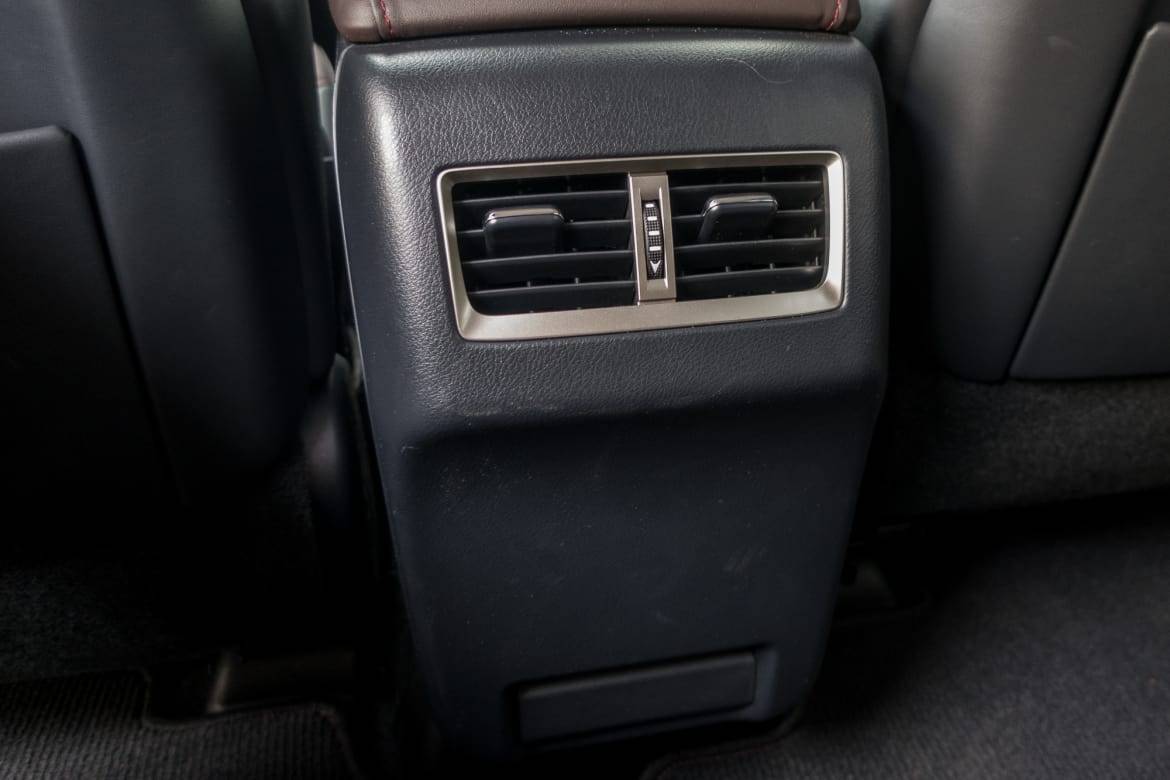 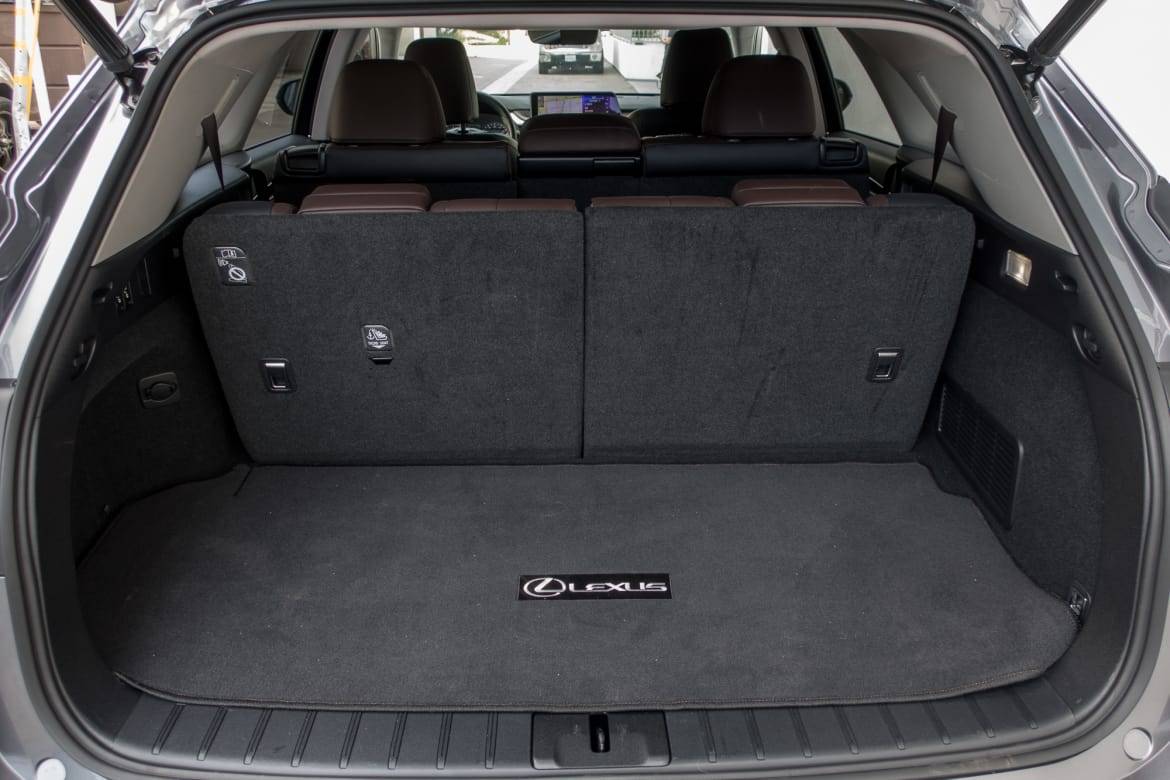 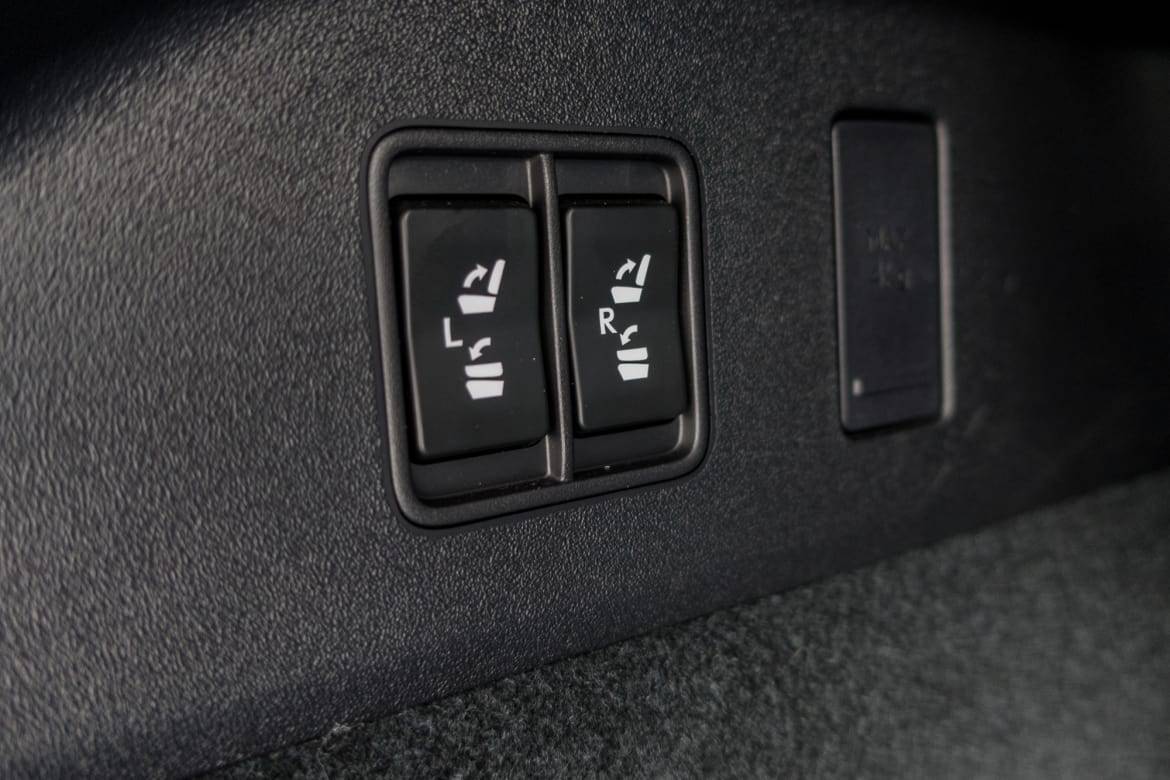 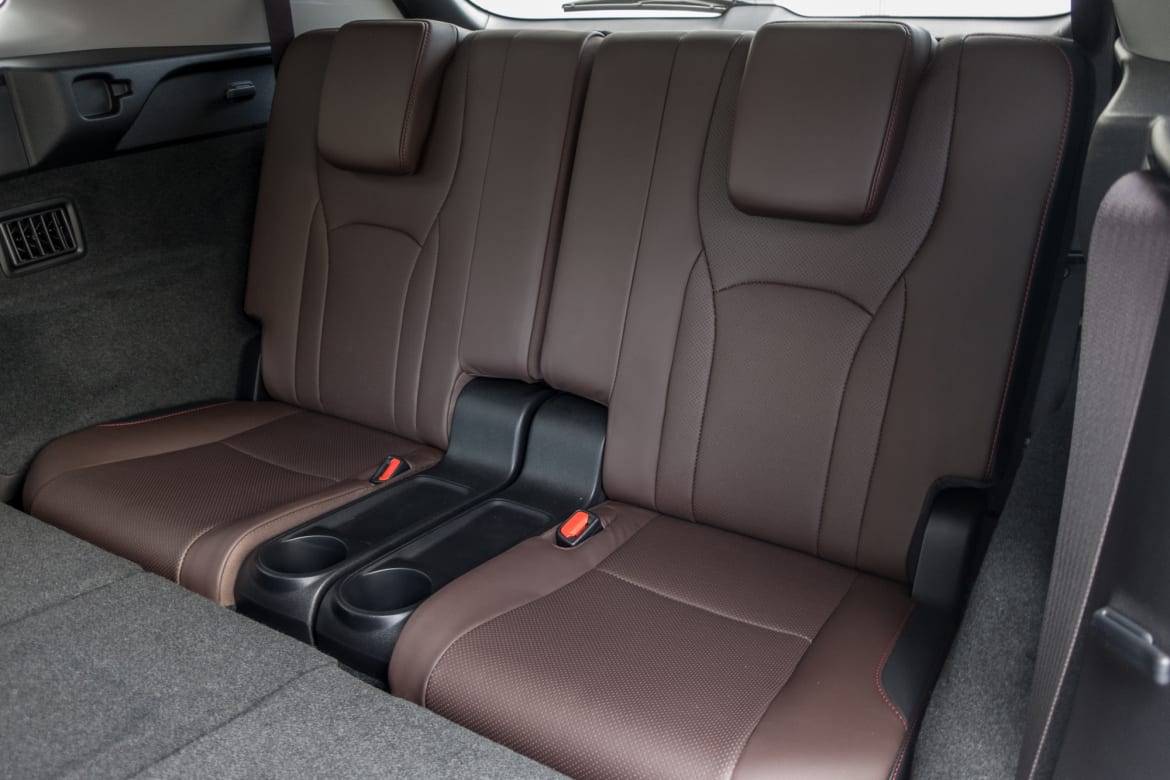 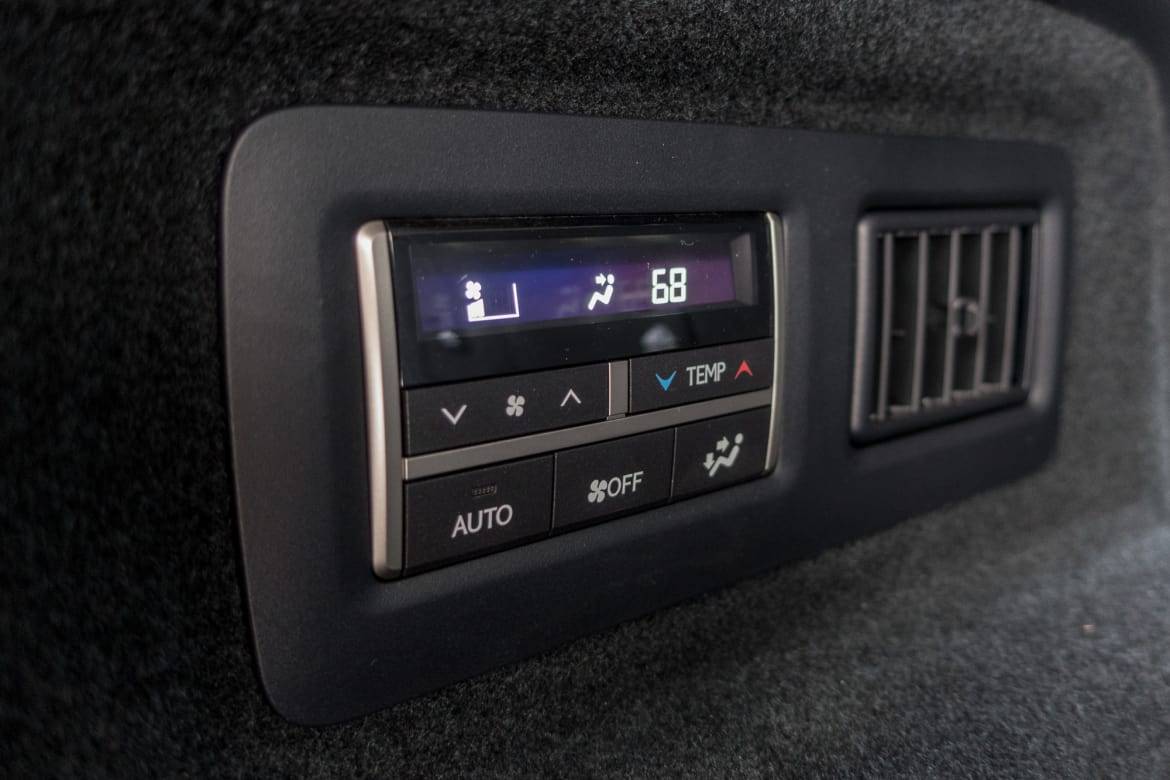 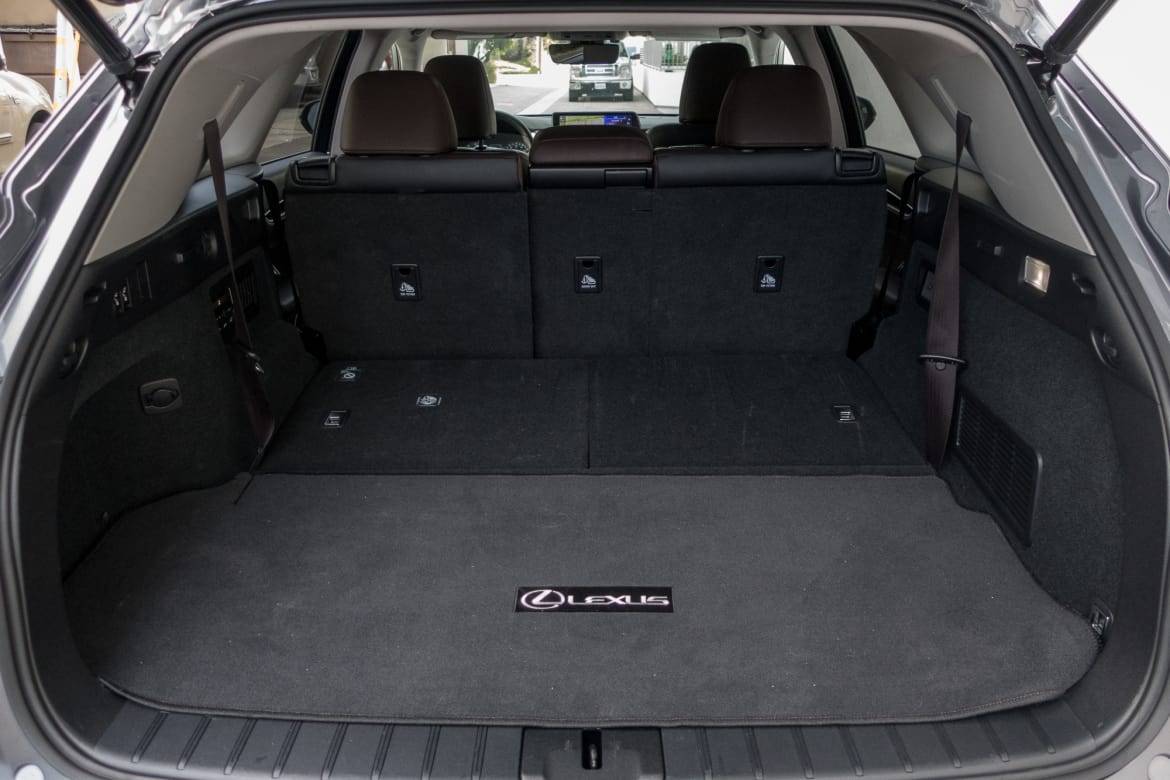 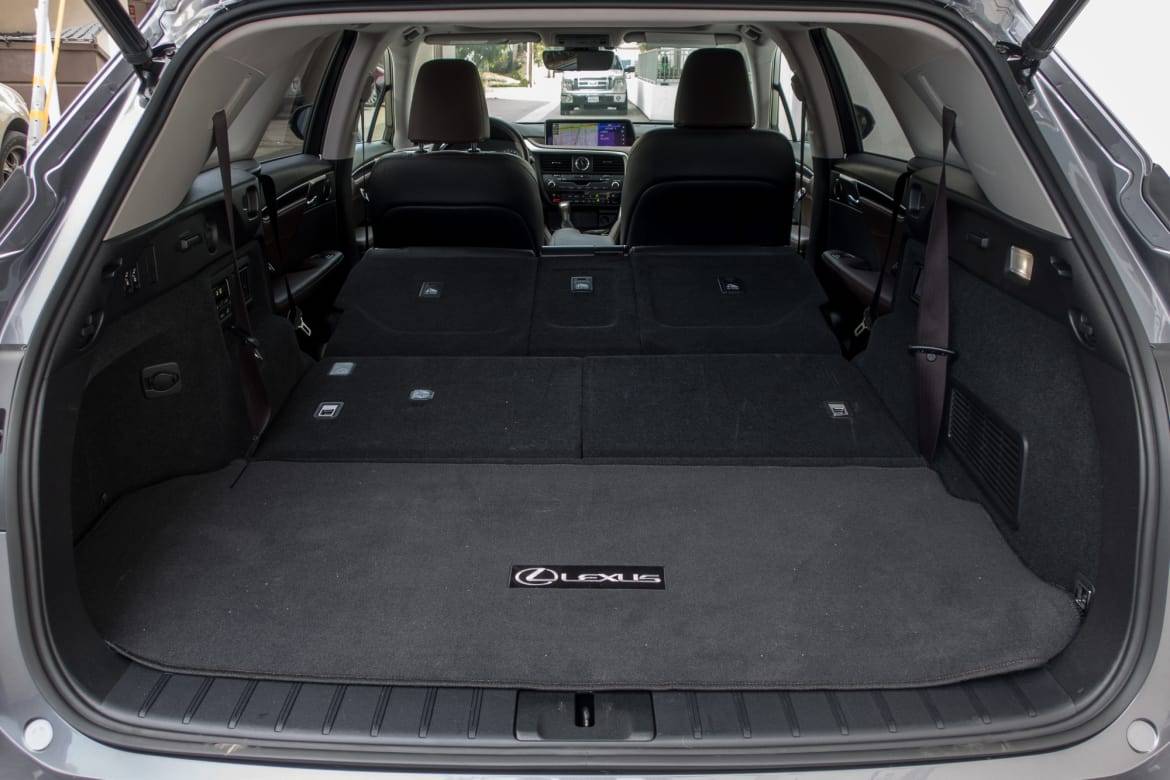 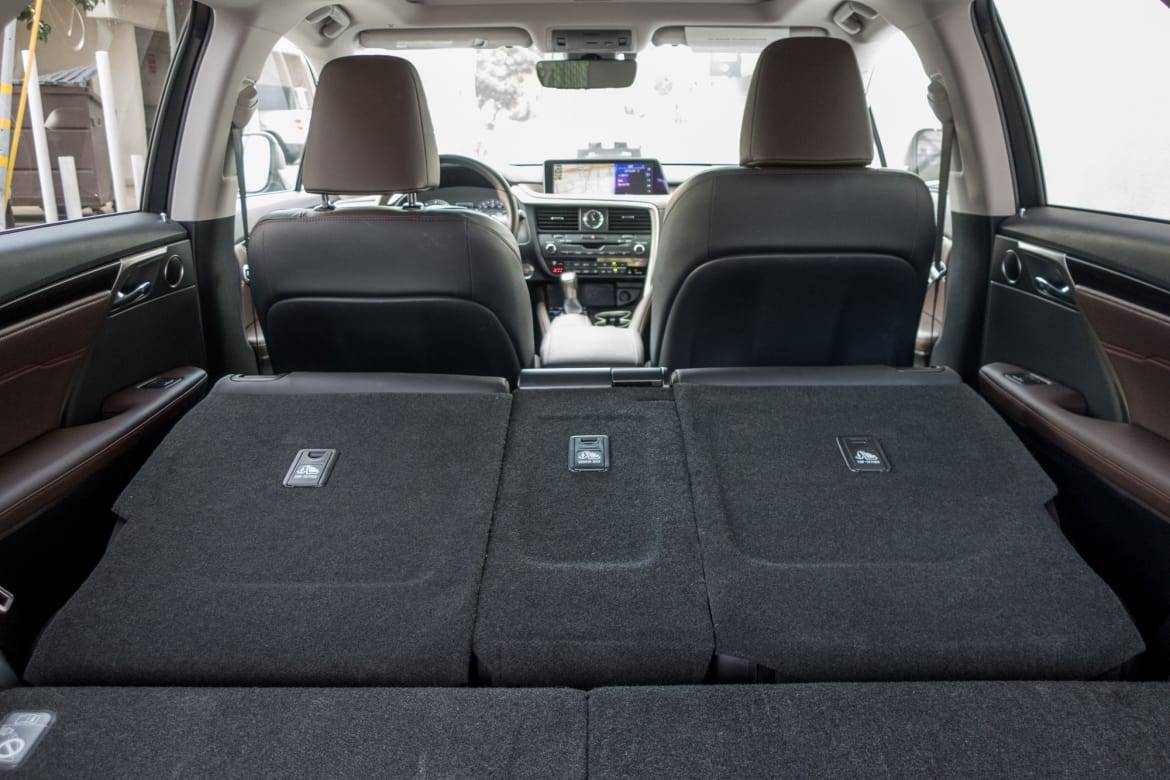 Until now, Lexus had a problem: In the age of the SUV, the company was missing a city-oriented three-row model that could carry more than five occupants. The Lexus GX 460 and LX 570 SUVs have third rows, but both are more on the rugged side, with body-on-frame construction and big, fuel-hungry V-8s under their hoods. Those models effectively take luxury off the beaten path, but they aren’t as well-suited for suburban or city life.

Much of what’s found in the first two rows (for better or worse) is the same as in the regular RX, so what you’re paying for in essence is that extra seating capacity.

The RX 350L is longer than the standard RX 350 by 4.4 inches, but it has the same wheelbase and overall width (compare the two vehicles here). The additional length goes directly to the third row. On the spec sheet, the RX 350L has significantly less second-row legroom than the RX 350 (38 inches vs. 30.9 inches), but I didn’t find this to feel true in practice — there was still plenty of room in the second row for adults in terms of both legroom and headroom, and the seat slides forward and back on tracks so you can negotiate some extra breathing space between the rows if needed. That could explain the spec disparity; sometimes a sliding backseat complicates specifications because the automaker chooses where to position the seat for measurements. The decreased second-row legroom may reflect that the third row’s spec was given more space.

Even so, things aren’t rosy in the third row, which has a reported 23.5 inches of legroom. I realize that figure is kind of abstract, so let me put it in more concrete terms: I can’t get the second-row bench to lock back into place in its track if I sit facing forward, I have to stick my legs to the side to complete the task — and then keep them there.

To test out the third row’s real-world usability, I enlisted the help of some friends (or at least I hope they still are). As six of us left an escape room, I put them through an escape of a different kind: 15 minutes in the car on the way to dinner. I put the two smallest people in back (a 5-foot-9-inch male and a 5-foot-4-inch female), and all of us worked together to try to make the space work, moving the front seats up and the second-row bench as far forward as it could go. But even at that point, there was no saving the situation. I turned back to ask our third-row passengers how they were faring, but the question caught in my throat when I saw their heads kinked to the side — there isn’t enough headroom to sit up straight, either.

The final blow to the third row is visibility. The RX 350L’s roof and back pillar design gives third-row passengers only a tiny porthole to look out, making it feel even more cramped than it already does. One may think that the third row is suitable for children, but I think it’s too small even for that, and there’s only one child safety seat tether on the driver’s side and no lower Latch anchors to boot. The only redeeming attribute I could find for the third row is that it has its own set of climate controls.

It’s worth mentioning that the second-row bench can be swapped out for captain’s chairs in the gas version, and the captain’s chairs are standard on the hybrid. They help third-row accessibility somewhat, as you can climb back between the seats rather than off to the side, which is a passageway meant only for people who subsist on salads.

The third row also eats into cargo room when it’s in place, leaving only 7.5 cubic feet. That space expands to 23.0 cubic feet when you stow the seats away into the floor (via a helpful set of powered controls in the cargo area), beating the standard RX 350’s 18.4 cubic feet. Just don’t expect to carry more than five occupants and their luggage unless you plan to take advantage of their laps.

Though the third row is a major downer, the rest of the interior apes much of what you’d find on the standard RX 350, and that’s just fine by me. Lexus has a proficiency for crafting quiet, high-quality cabins, and the RX 350L is no exception. The RX 350L does get standard leather upholstery over the RX 350’s faux leather, and the Noble Brown version on my test vehicle was a highlight for me.

Up front, the center console is pretty wide and slightly invades leg space, especially on the driver’s side. Luckily, it’s padded to make your right knee more comfortable, but taller drivers should ensure they fit comfortably before buying.

The cabin’s overall quality and comfort are pluses, but the big minus for the RX 350L is the same problem that plagues the rest of the vehicles in Lexus’ lineup: the Remote Touch interface. The available 12.3-inch screen that sits atop the dashboard is fine, but the only way to interact with it is through a mouselike control sitting between the front seats. It’s an unnatural, difficult way to use a system that’s also plagued by an overabundance of menus and hard-to-settle-on controls. Our staff is starting to sound like a broken record on this, but as long as Lexus insists on trotting out this substandard system, we’ll call it what it is.

The RX 350L’s driving experience is comfort-oriented. It smooths out road imperfections nicely, and I didn’t detect much tire or road noise. In fact, there wasn’t much noise at all; cabin isolation is a strength. The counterpoint is that the car languishes in corners, with plenty of body roll and an aversion to quick changes of direction. But I think the tradeoff is one this vehicle’s likely buyers will be willing to make for its comfort and composure over rough roads.

I tested only the gas version, which has decent acceleration — enough grunt to keep the luxurious feeling, but not enough to get you into any trouble (or fun, as I like to call it).

The RX 350L comes with a strong set of standard safety features wrapped in a bundle Lexus refers to as Lexus Safety System Plus. The technology includes forward automatic emergency braking, lane keep assist, automatic high beams and adaptive cruise control that works all the way down to a stop. Also standard are rain-sensing wipers and 10 years of Lexus Enform Safety Connect, which offers emergency assistance and can send responders to the vehicle’s GPS location.

For those who want more, there are also available LED cornering lamps, a blind spot monitor with rear cross-traffic automatic braking (not just alerts), a windshield wiper de-icer, parking sensors and a 360-degree camera system.

The systems all worked seamlessly in my testing, though the lane keep assist does have a propensity to bounce the car from one side of the lane to the other. A more effective lane-centering system, which Lexus calls Lane Trace Assist, has appeared on some models, but not the RX.

RX 350L competitors include three-row luxury SUVs such as the Audi Q7, Acura MDX and Infiniti QX60 (compare the RX 350L with those models here). While none of them have what I would call “expansive” third rows, they are larger than the tiny one found in the RX 350L and can be used for at least short journeys without too much trouble.

The RX 350L’s entire reason for existing is kind of a letdown, and that influences the rest of my feelings about the vehicle. If Lexus wants to add a city-friendly three-row SUV to its lineup, it would be better served by coming out with a new model instead of trying to shoehorn a third row into an existing one.