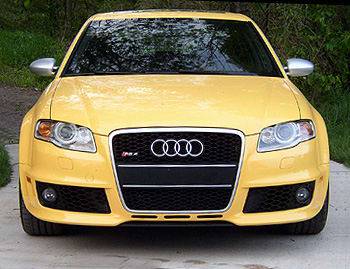 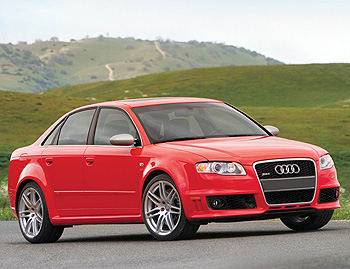 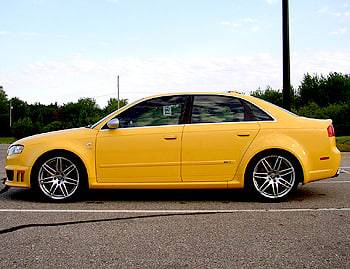 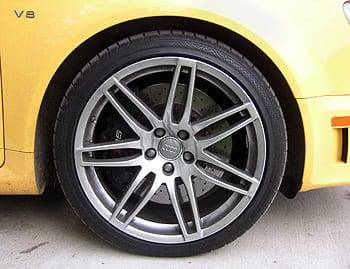 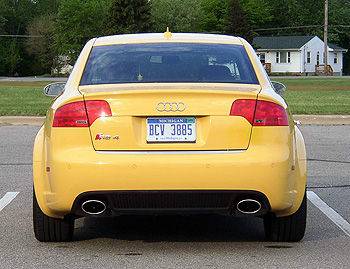 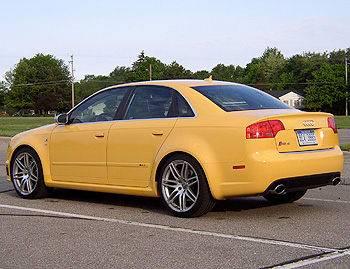 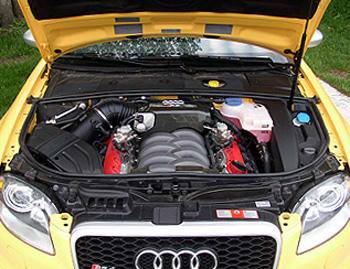 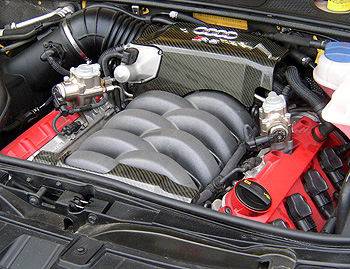 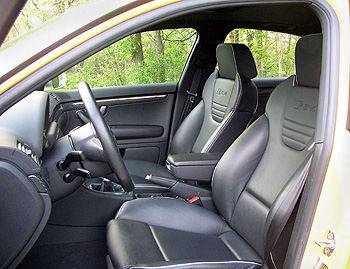 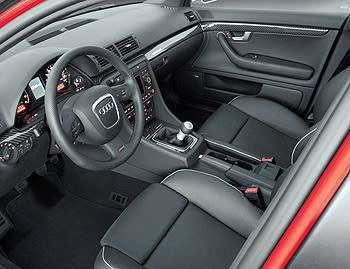 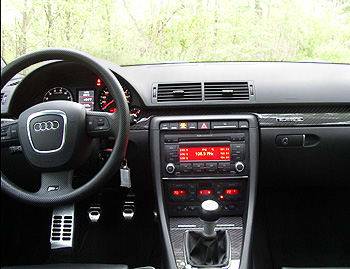 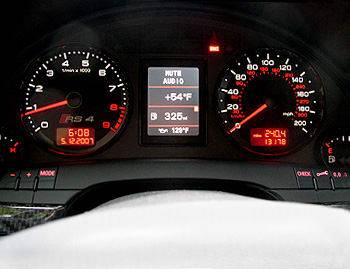 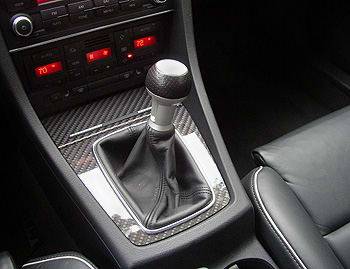 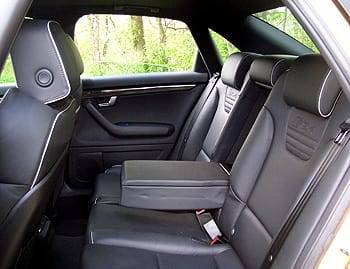 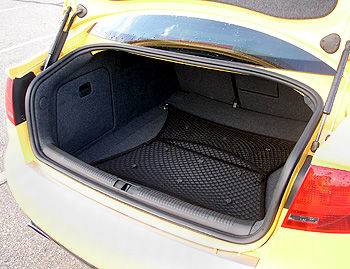 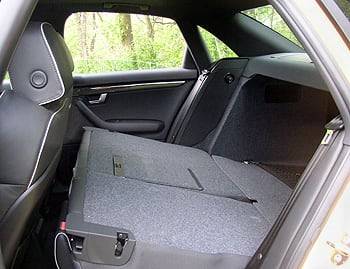 It’s easy to get caught up in performance specs when considering a car like the RS 4 — they’re pretty impressive, after all. So forget all the numbers for a moment. There’s an easier way to determine how successful a performance car is at its mission: Does it put a grin on your face? For this car, the answer is an enthusiastic “yes.”

The fact that I was able to review the RS 4 at all is a testament to the sport sedan’s durability. Earlier this month, my test car spent a day at Road America, a technical 4-mile racetrack in Elkhart Lake, Wis., where it was driven hard by a group of journalists. I’ll talk about how it handled the track later on, but for those of you who don’t have any plans to push the limits of the RS 4 in this type of environment, it’s plenty fun on public roads, too.

Going & Stopping
The RS 4’s 4.2-liter V-8 engine takes a little getting used to because its characteristics differ from most production V-8s, which make peak torque low on the rev range. The RS 4 makes its 317 pounds-feet of torque at a high 6,000 rpm, and its 420 horsepower arrives at 7,800 rpm. By comparison, the less-powerful V-8 in Audi’s S4 makes 302 pounds-feet of torque at only 3,500 rpm.

What this means in everyday driving is that you need to rev the engine pretty aggressively to extract its peak performance. After a couple of trips to the redline, though, you’ll have no qualms about it, as this engine is one of the quickest- and smoothest-revving V-8s around. If you lay on the gas pedal with the V-8 turning around 3,000 rpm, be ready to shift gears soon — it doesn’t take long to reach 7,000-plus on the tachometer.

The V-8 really begins to assert itself from 4,000 to 5,000 rpm, and has little trouble pushing you and your passengers back into your seats as it surges forward, all while delivering a whirring, turbine-like exhaust note that’s subtle enough to avoid attracting too much attention (hurtling past every car around you will take care of that). According to Audi, the RS 4 can go from a standing start to 60 mph in 4.8 seconds.

The RS 4 has a Sport button in the middle of the dash that Audi says makes the exhaust sound more aggressive, by opening baffles in the mufflers, and increases the responsiveness of the gas pedal. In Sport, the exhaust sound is somewhat deeper and makes a muted “blat blat” when you lift off the throttle to shift, but considering the car’s top-tier performance capabilities, the note could easily be louder. I couldn’t tell the difference between regular throttle response and the Sport mode’s.

All RS 4s have a six-speed manual transmission; an automatic isn’t offered. The precise shifter moves easily from gear to gear, and its throws are medium in length. Clutch pedal effort is rather light — it didn’t tire my leg when crawling in rush-hour traffic — and clutch engagement is smooth. All in all, it’s a setup that should be pretty easy to live with.

Therein lies one of the RS 4’s best non-performance aspects: Whether you’re driving the RS 4 at its limits or just to the gas station — which, by the way, you’ll be visiting frequently with its EPA-estimated 14/21 mpg (city/highway) — the car has a high level of sophistication that helps make the as-tested price of nearly $70,000 (including the $2,100 gas guzzler tax) easier to swallow.

With so much power under the hood, Audi was wise to give the RS 4 a robust brake system. The front cross-drilled disc brakes are 14.4 inches in diameter and are gripped by eight-piston calipers. The rear discs are cross-drilled, too, but are slightly smaller at 12.8 inches in diameter and squeezed by one-piston calipers. The result is strong stopping performance with good pedal feel.

Ride & Handling
Like the hood and front fenders, the RS 4’s independent suspension is made of aluminum. The RS 4 also features the Dynamic Ride Control adaptive suspension, which is designed to lessen body roll as well as acceleration squat and brake dive. The DRC system connects the car’s dampers with each other and can change the characteristics of the shock absorbers based on driving conditions in order to keep the car flat. While excessive body motions aren’t an issue with the RS 4, it’s hard to tell that there’s a sophisticated system like DRC at work; for the most part, the sedan just feels like it has a firmly tuned sport suspension, which it does.

That firmness will become an issue if the roads you drive on are in poor repair. The RS 4 crashes over expansion joints on the highway with seemingly enough force to knock your fillings loose. Repeat every second or so for an hour and you’ll be worn out (the car’s low-profile P255/35ZR19 performance tires are likely partly to blame). Apart from this issue, which may or may not be significant depending on the roads you drive on, the firm ride is pretty tolerable for a performance car.

The RS 4’s Servotronic variable-assist steering system provides plenty of boost for easy parking lot maneuverability, but once the car is up to speed the assistance lessens, giving the wheel a satisfying, weighty feel.

On the Track
This probably isn’t a revelation to anyone, but most production cars — even sporty ones — can’t really cut it on a racetrack like Road America, which has both fast straights and tight turns. They either lack the power to achieve speed quickly on straightaways or have difficulty in the corners. There’s nothing wrong with this, really, as production cars aren’t designed for this environment, but it’s always nice when you find a car that can handle the challenges a track poses. The RS 4 is such a car.

Whether it was powering down Road America’s two long straightaways or navigating the turns, the RS 4 felt balanced and controllable at all times, thanks in part to its rear-biased Quattro all-wheel-drive system. The system sends 60 percent of engine torque to the rear wheels and 40 percent to the front, but can direct 100 percent of the power to the front or rear wheels when conditions warrant. One of the primary benefits of this setup is that it lets the RS 4 accelerate out of a corner like a rear-wheel-drive car; giving it some gas will bring the rear end around.

Good, strong brakes are a must on a track like Road America, and the RS 4’s weren’t taxed at all during my hot lap; they felt like they could last all day.

The Inside
My test car’s nearly all-black interior was quite a contrast from its look-at-me Imola Yellow exterior. Featuring real aluminum and carbon fiber trim, the cabin styling has a serious undertone to it that matches the car’s exterior styling (aside from the paint job). The dual-zone automatic air conditioning system controls are positioned a little bit too low, but ergonomics are otherwise good.

Power-adjustable Recaro front sport seats are standard and covered in leather. The bottom cushion and backrest have large side bolsters, which do a good job keeping you in place when cornering quickly. Lower back support is only decent, and that’s after adjusting the four-way lumbar support.

Even though it has four doors, that doesn’t mean the RS 4 is ideal for carrying four or five adults in comfort. While it’d be possible to do in a pinch, the backseat is rather small overall and there’s not a lot of legroom.

Though the RS 4 hasn’t been crash tested by the Insurance Institute for Highway Safety, the car on which it is based — Audi’s A4 compact car — has; it received Good overall ratings — the highest possible score — in IIHS’ frontal-offset and side-impact crash tests.

Cargo
The RS 4’s trunk measures 13.4 cubic feet, and a 60/40-split folding rear seat is standard. Other automakers ditch this practical feature when engineering high-performance models, so it’s nice to see Audi retain it from the A4.

RS 4 in the Market
The RS 4’s closest competitor at the moment is the Cadillac CTS-V, which offers similar performance specs for a lot less dough. The Cadillac is quite a brute, though, compared to the RS 4, which is as docile as a regular A4 when not blasting down the road. BMW’s future M3 should compete with it, too, and Mercedes-Benz’s AMG unit could always drop a V-8 in the new C-Class, but right now the RS 4 is the ruler of the high-powered-compact-sport-sedan world. It is practical four-door performance at its finest.