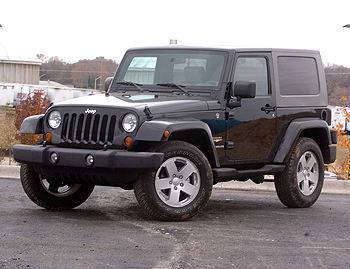 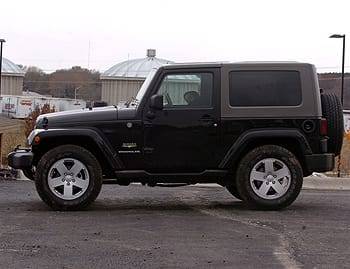 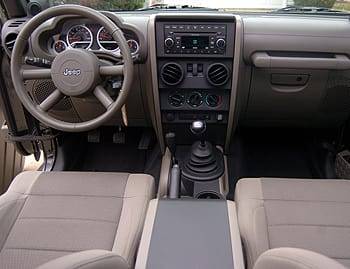 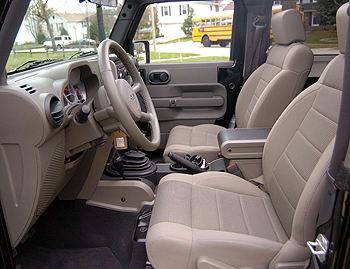 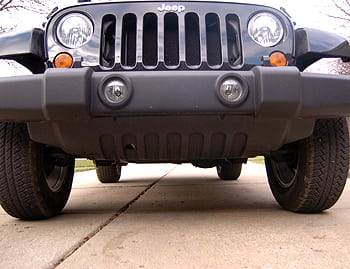 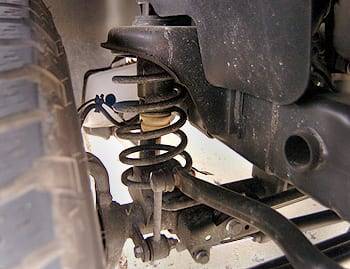 1/6
The 2007 Jeep Wrangler has undergone a complete redesign that marries the past with more masculine features and blocky shapes.

Jeep is attempting to broaden its brand appeal by introducing large SUVs like the Commander and small crossovers like the Compass, but neither has gained the strong following that the legendary Jeep Wrangler has had. For 2007, Jeep has revamped the Wrangler but kept its classic looks — and, more importantly, its offroad ability — while adding a whole lot of comfort. The Wrangler should satisfy offroad enthusiasts, yet still deliver a pleasing everyday driving experience. That’s not easy to do, and Jeep does it best.

Exterior
At first glance, most shoppers won’t notice a difference between the all-new 2007 Wrangler and the decade-old design it replaces. Look a bit closer, though, and it’s evident that every piece of metal is new for 2007. This new Wrangler is much more refined and masculine.

The front has a slanted grille instead of an upright number, the fog lights are integrated into the bumper, the fender flares flare out a bit more, and did I mention the new doors, with optional power windows, and removable hardtop? You could almost call it a civilized design, one that accentuates the new model’s improved on-road attributes as well as its legendary offroad prowess.

Interior
Jeep interiors aren’t the top of the class. They often feature too many bulky plastic surfaces, but considering the rugged nature of the Wrangler, we’ll give them a pass. The layout, design and ergonomics deliver, and I was left wanting very little. My test vehicle was equipped with Chrysler’s stain-resistant fabric, and it’s probably an essential option for buyers who take the Wrangler off-road.

First-time Wrangler owners will have to get used to the somewhat cramped environment. For such a tall vehicle, it’s not exceptionally wide, and that means cramped hip room and a horrible upright seating position.

The lack of a dead pedal — the flat area to the left of the clutch or brake pedal — is an atrocious oversight. Whenever I finished shifting and was settling into a prolonged stretch of driving, my left foot had nowhere to go but straight down, almost backward, toward my seat. Most of the time I let it rest slightly on the clutch pedal — not a safe thing to do — just so I could be comfortable on the highway.

I got little use out of the rear cargo area and wound up having to put large objects and even grocery bags in the backseat. It wasn’t that the back couldn’t hold everything, it was more the bulky side-opening tailgate and vertical layout of the cargo area that turned me off. The two-door model is not what I would call a utility vehicle in any way.

Going & Stopping
Even though it only makes 202 horsepower, the Jeep’s 3.8-liter V-6 was plenty powerful for highway driving. The six-speed manual rowed the gears in precise, if clunky, fashion. I’m kind of surprised that by 2006 all stick shifts aren’t effortless; there are slick ones in some sports cars, and then there are crunchy ones, like in the Jeep.

The clutch was easy enough to use, but its position far to the left, near the door, made it uncomfortable to live with when not in use because it took up all the free space your left foot normally needs. Of course, you might be looked down upon by the rock-crawler set if you opt for an automatic transmission.

On the highway, the Wrangler handles well once in a higher gear. In lower gears, getting up to highway speed, the Wrangler shows it wasn’t designed for quick acceleration — a setup that wouldn’t be ideal for off-roading. In the 60 to 70 mph range, the Wrangler does just fine. It never felt tipsy, even during extremely windy conditions on one highway drive. I find myself surprised that the Wrangler could be a good daily commute companion.

Ride & Handling
Before I tackle the Wrangler’s offroad ability, I wanted to follow up my commute comments above by adding that road and wind noise are amazingly muted for a vehicle like this. You don’t usually get so little wind buffeting driving such a boxy design. The Wrangler is literally a box, yet I’ve tested sports cars that were all swoops and angles that had more wind intrusion than the Wrangler. That doesn’t mean it was dead silent, just better than you would expect.

On the highway, the tall driving position and suspension setup leave you feeling disconnected from the road, and that’s probably the Wrangler’s major failing.

The Jeep, however, exists to traverse unpaved roads, rocky hills, small streams and other inhospitable paths. While I didn’t encounter any trails in my week with the Wrangler, I did tackle some of the roughest “paved” roads in America. The Wrangler took streets under construction as if they were part of a regular commute. I rode on uneven pavement repeatedly, aimed for potholes and even took a low curb or two to get around traffic. If anything, the Wrangler exudes a sense of invincibility that may lead drivers to try unsafe maneuvers.

The fact that you can happily frequent the highway and rough roads around town, then shift the Wrangler into four-wheel drive — low or high — and leave the pavement entirely, is really saying something. Overall, the two-door was a better all-around driving companion than the new four-door Wrangler Unlimited. There’s some new competition for the Wrangler in the offroad segment, including the Toyota FJ Cruiser, but the Jeep is still one of the toughest tacklers of terrain on the market.

It has 10 inches of running ground clearance, which tops the competition, and boasts impressive approach and departure angles. Those are stats that translate into those commercial-ready rock-crawling, river-fording and log-topping maneuvers for which the Wrangler is famous.

Features
The Wrangler comes standard with a cloth top, but my test vehicle was equipped with the optional removable hardtop. Its considerable bulk might turn off fans of open-air driving, but for those in northern climates it’s probably preferable to the standard cloth.

My test vehicle also had an upgraded stereo that included speakers placed in the roll cage, behind and above the front seats. Even with that ideal placement, four front speakers and a subwoofer, the stereo didn’t impress me.

Safety
Stability control, traction control, brake assist and rollover mitigation all come standard on the Wrangler. Because its roof and doors are removable, airbag placement is limited to the front of the vehicle, with optional side airbags placed in the seats. The 2007 Wrangler has not yet been crash tested by the Insurance Institute for Highway Safety or the National Highway Traffic Safety Administration.

Wrangler in the Market
The Jeep Wrangler used to be in a market of one. Now, with competition from the FJ Cruiser and Hummer’s H3, the 2007 version had to up the ante on all levels, and it did. There is not a more capable off-roader on the market, and besides the high sticker price of my test vehicle — a Sahara model with the hardtop that closed in on $28,000 — aficionados will find little to complain about.

The problem is, the potential market itself is so limited I don’t see the 2007 Wrangler gaining many new buyers. Luckily for Jeep, Wrangler fans are loyal and would probably buy a new model no matter how much it’s improved.