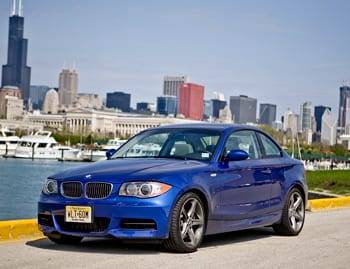 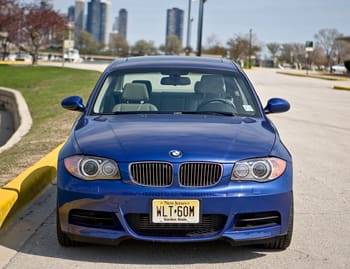 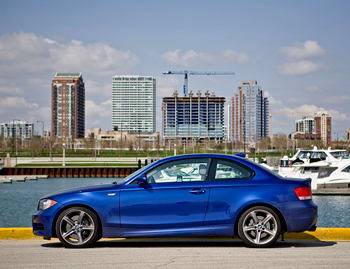 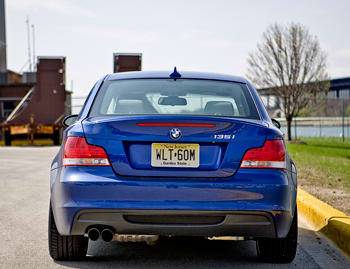 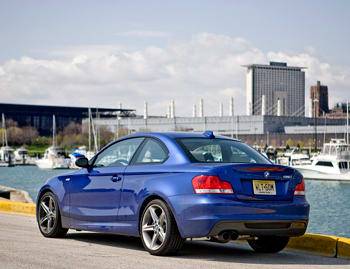 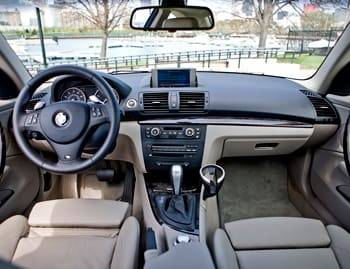 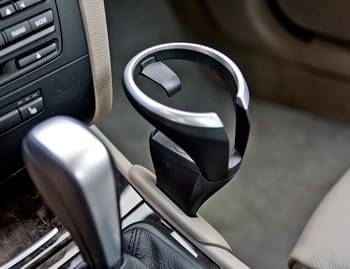 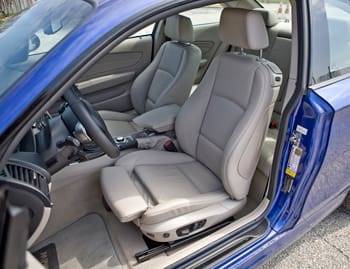 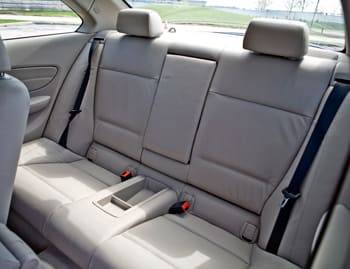 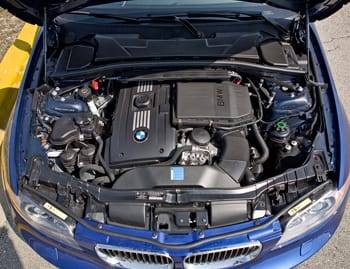 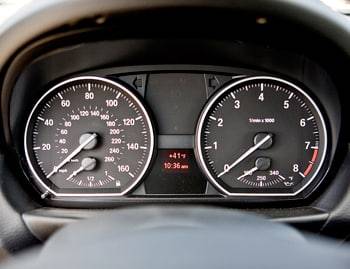 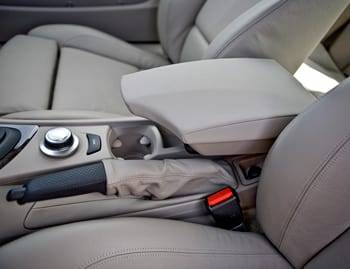 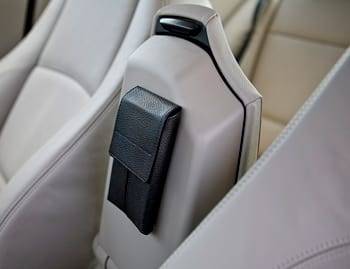 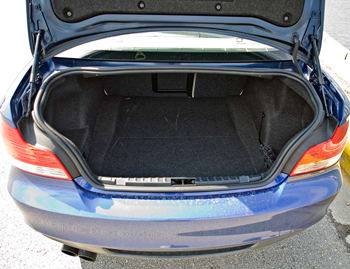 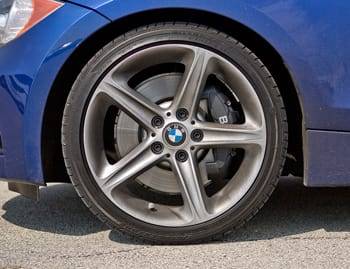 1/15
Fans of BMW&#39;s oddly angular recent designs might not like the curvier 1 Series. It won&#39;t be confused with another nameplate, but it doesn&#39;t fit in the current lineup in the looks department.

A new BMW model is a big deal. Since the turn of the millennium, we’ve been treated to the Z4 roadster and coupe, the small X3 SUV, and the 6 Series full-size coupe. For 2008, BMW is bringing two new lines to the family: the X6 SUV and the small 1 Series. That brings the number of BMW models to nine.

What makes the 1 Series different? Is it the fact that it’s the least expensive BMW on the market? No, because it only wins that title by a few thousand dollars versus comparable 3 Series models. Is it its small size? Nope; it fits between the pedestrian Volkswagen GTI and Honda Civic coupe in the size department, and it’s a full 2 feet longer than the Mini Cooper.

The attribute that sets the 1 Series apart — specifically the 135i — is its spine-tingling performance chops. To get those thrills, though, you’ll have to part with a fair amount of money.

Performance
If I were reviewing the 128i, I’d start off by discussing the 1 Series’ somewhat maligned looks. We’re talking about the twin-turbo 135i, though, so I have to address the performance aspects first.

Wedged under the 135i’s small hood is the same 300-horsepower, twin-turbocharged six-cylinder engine that the Cars.com staff has known and loved in the significantly larger 335i and 535i. It serves as the base engine for the new X6 SUV, too. It’s a sublime power plant with little turbo lag and a lot more thrills than its 300 hp suggests.

Wait, am I saying 300 hp isn’t a lot? Not these days, but it should still be plenty for anyone. It certainly is in the 335i, and it’s considerably more than enough in the lighter 135i. There are a handful of affordable 350-plus hp cars on the market, but none propel forward with the unbridled eagerness of the 135i.

The throttle is very sensitive and zips you forward with the slightest provocation. This is probably the No. 1 reason I’d call the 135i a thrill ride and the lengthier, heavier 335i a refined ride.

This “always ready to take off” attitude can get annoying during busy highway driving, though. It constantly feels like you’re holding back a horse that’s ready to gallop. Factor in the grippy brakes and touchy accelerator, and the annoyance factor jumps up. And did I mention the bumpy ride? Eighteen-inch wheels and tires are standard, and they combine with a sport suspension and a short wheelbase to offer a less-than-pleasing street ride.

On bad roads like those I routinely drive in Chicago, the 135i’s ride was brutal; it was more in its element on pleasant rural curves. On the track, though, is where the 135i was mind-blowingly awesome.

Sorry for the momentary lapse of journalistic composure, but what really makes the 135i special is that it’s an attainable car that’s made for the track. In fact, one young Cars.com staffer said he’d rather have the rear-wheel-drive performance of the 135i than the all-wheel-drive chops of a Subaru STI or Mitsubishi Lancer Evolution, despite those cars’ long hold on his generation. If I had to compare the 135i to either of those cars, I’d have to agree — though my brief time on the track in the new Evolution was also a treat.

How fast is the 135i? It hits 60 mph in a scant 5.1 seconds with a manual and 5.2 seconds with an automatic, which is comparable to both of those Japanese speedsters. What makes that fact even better is that straight-shot speed is not where this car excels; that happens in the twists and turns.

I drove the 135i on the Road America course in Elkhart Lake, Wis., on the same day I tested all sorts of high-speed vehicles there, including the STI, Evolution and even the 414-hp BMW M3. None were as much fun to throw around the track as the 135i was. I felt like I was in total control of the rear wheels in this car; it was probably the best lap of my day. Cars.com staff photographer Ian Merritt was on board, and his worrisome mutterings during the run were just the collaboration I needed to pen this praise.

The 135i I tested for a full week had a six-speed automatic with manual shift paddles, which are a $1,275 option. A six-speed manual comes standard, and I think I would have preferred the bare-bones experience of that setup to the automatic. It is a performance machine, after all.

Those looking for a more refined, elegant ride would be well served to pay an extra $6,000 for a 335i coupe.

Looks
The 1 Series isn’t an attempt at the avant garde look of the Z4 coupe or the extreme sleekness of the 3 Series coupe. Instead it’s kind of, um, awkward. There’s no escaping the bulbous shape of the rear part of the passenger area. It doesn’t rise or stick up, it just doesn’t slope down like most modern coupes on the market do. This allows for decent headroom in the rear seats, but looking at it from outside you’re not thinking about ergonomics.

It’s hard to explain this shape, as it’s out of tune with the rest of BMW’s very sleek-looking lineup. Even SUVs like the X5 — and especially the new X6 — have radically sharp angles all over the place. I liked every other angle of the 135i, though, from the refreshingly curvy front to the upper lip of the rear trunklid.

The 135i I drove came with the standard 18-inch alloy wheels, which I have to say were quite unique. From a distance the five-spoke design doesn’t look too interesting, but up close you see there’s a raised, curving lip between each spoke.

I guess my main gripe is that the 1 Series isn’t overtly striking in the visual department. Most designs in the current crop of BMWs are impactful, if not for all tastes. The 1 Series seems hum-drum in comparison, even in sporty 135i duds.

Interior
Inside, the 1 Series is a slight step down from the 3 Series in terms of quality. The leather is less luxurious and the seats are significantly firmer. The plastic also seems to be a lower grade in a few places. Overall, though, it still feels like a BMW, and I didn’t feel like I was in a “lesser” vehicle even though the price was less than the 3 Series’.

Full-Size BMW Prices
Want a new BMW 135i? Get ready to part with at least $34,900. That is far from entry-level pricing. A number of larger entry-level models, like the Infiniti G35, Audi A4 and Mercedes-Benz C-Class, all start for less. That’s why buyers should look at the 135i as purely a sports car, not a beginner’s luxury car. Those other models do the entry job better. Even the 128i comes at a substantial $28,600 starting price.

The cars the 135i should really be compared with are the Subaru Impreza WRX STI and the Mitsubishi Lancer Evolution as sport car enthusiasts’ vehicles of choice. Those come in at $34,995 and $32,990, respectively. Compared to those two models, the 135i comes pretty well-equipped at $34,940 with a six-speed manual transmission, simulated leather upholstery, xenon headlights, rain-sensing windshield wipers and a moonroof, standard. Plus, those enthusiast drivers won’t be outdone in the performance department and will get to pull a BMW into their driveway at night.

Of the few hundred 135i coupes and convertibles listed in Cars.com’s national inventory of new cars, about 20 coupes were priced under $40,000. Most of the $40,000-plus vehicles had a number of a la carte options added.

Personally, I’d delete the Premium Package, Comfort Access, automatic transmission, navigation system and satellite radio, then spend $770 to add BMW Assist, which you need to get Bluetooth. I’d also opt for the premium stereo ($875) that adds two subwoofers and displays MP3 song titles, for a total of $40,145. That would be a very nice “bare-bones” 135i, and it still breaks the $40,000 mark.

Safety
As of this writing, the BMW 1 Series hasn’t been crash tested by the Insurance Institute for Highway Safety. It does come with a number of safety features, including active head restraints, seat-mounted side-impact airbags in the front row, first- and second-row side curtain airbags, antilock brakes and stability control, all standard.

BMW 135i in the Market
As a sports car, the 135i has few equals in the thrills department in its price range, but there are a lot of cars out there that are still decently fun for a lot less money. The 135i is for extreme drivers who want the best car this size. Given that it comes in a well-equipped BMW wrapper, that enthusiast could easily opt for the 135i over the Japanese competition.

The only problem with the 1 Series is that it will be viewed by more than just enthusiasts. For those who aren’t in the know, the hefty price tag will make them balk — if not gag — at the newest BMW, no matter its performance capabilities.