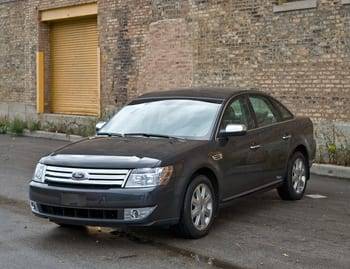 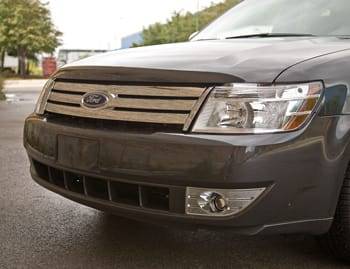 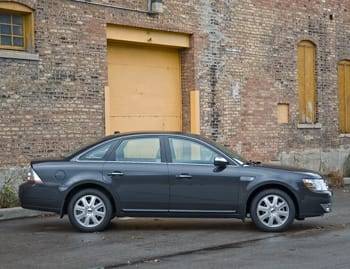 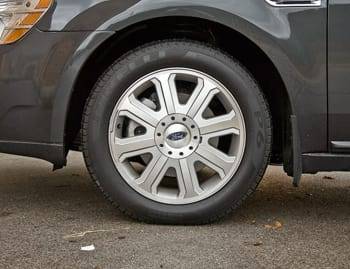 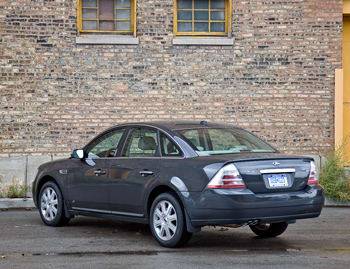 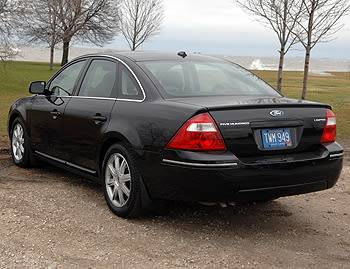 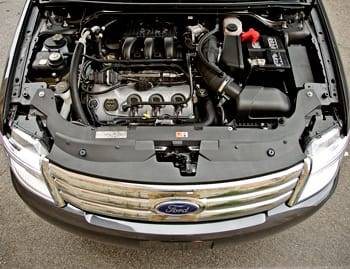 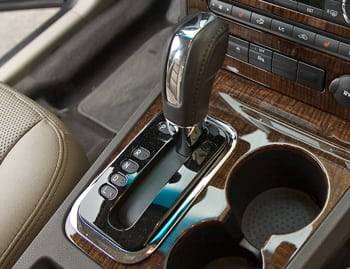 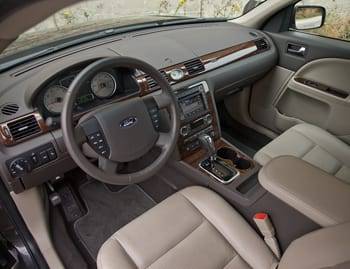 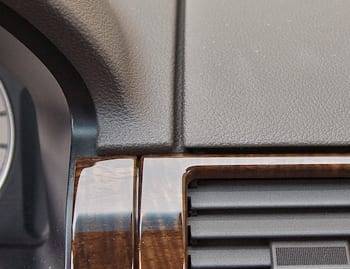 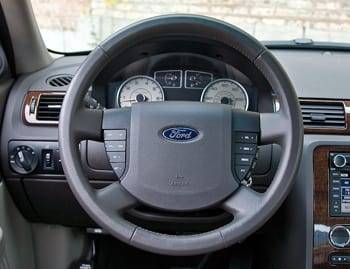 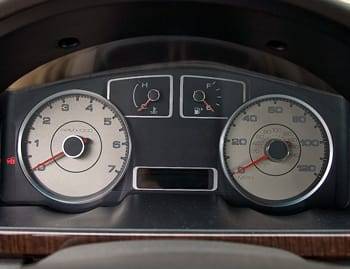 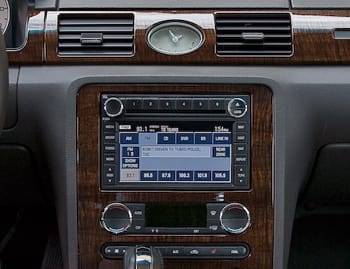 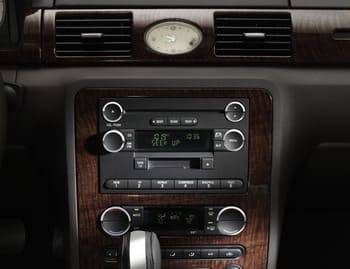 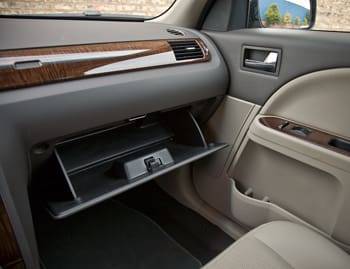 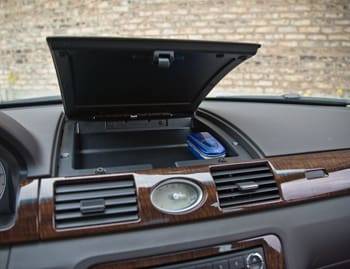 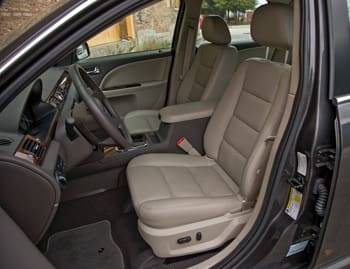 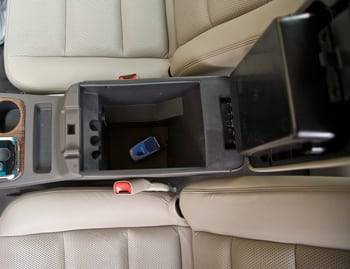 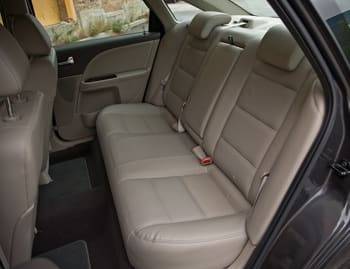 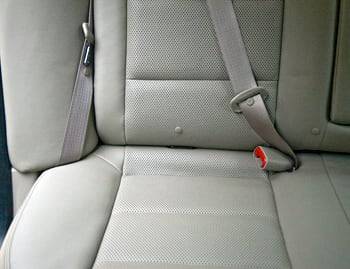 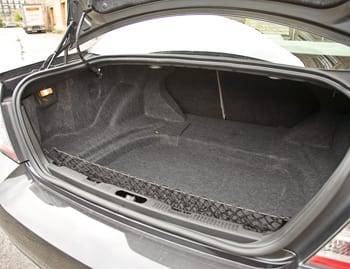 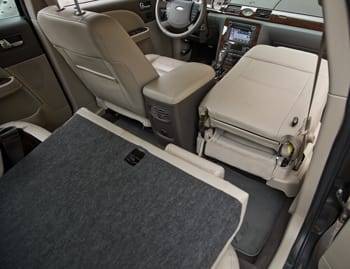 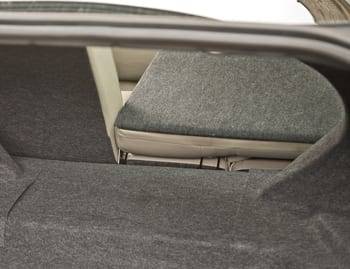 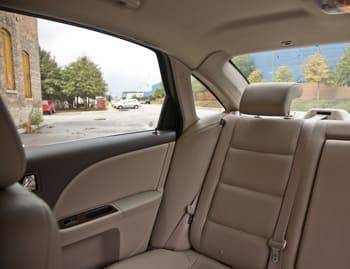 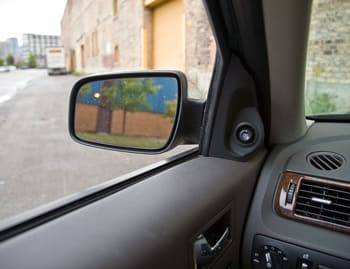 1/25
The three-blade grille looks a lot like the one on the Ford Fusion &#x2014; not to be confused with the Gillette Fusion, which has <i>five </i>blades. Between the grille and the stylized lights, there&#39;s a lot to sort through. I noticed a two-inch gap

Even if you’ve never owned a Taurus, you probably know someone who has. Before the demise of the original Taurus, it was Ford’s bread-and-butter family car and had a prominent spot in driveways across America — a degree of popularity the carmaker hopes to regain, at least in part, with the new Taurus. It’s a revision of the slow-selling Five Hundred, a practical car that suffered from unimaginative styling and modest performance.

The five-seat Taurus keeps the Five Hundred’s better attributes and reverses many of its faults, and it deserves to be a hit. Whether or not it will be depends on how consumers react to its cabin and styling. Both have improved, but neither is as compelling as some competitors.

The Basics
The Taurus comes with either front- or all-wheel drive. Ford also sells the Taurus X, a six- or seven-seat wagon derived from the Taurus. Mercury’s Sable sedan is the Taurus’ twin.

Trim levels for the Taurus include a base SEL and uplevel Limited. Both share the same V-6 engine, and an automatic transmission is standard. I drove an all-wheel-drive Taurus Limited.

Edgier Styling
Ford says there are some 500 updates to the Taurus compared to the Five Hundred, and they start up front. A new three-bar grille replaces the Five Hundred’s forgettable mesh one. The headlights and fog lights look crisper and less restrained than before, and the overall effect recalls Ford’s smaller sedans, the Fusion and redesigned Focus. Those who think they’re getting an upsized Fusion might be disappointed to see the Taurus in the flesh; with the same wheelbase and virtually unchanged dimensions, it keeps the Five Hundred’s stodgy profile.

The taillights now have clear lenses, something a lot of automakers resort to when they need to spice things up. I parked beside a Five Hundred, and its simpler red taillights seemed more fitting for a large family car.

How it Moves
With its upsized V-6 engine (the 3.5-liter Duratec gets 263 horsepower, up from last year’s 203), the Taurus moves smartly from stoplights and pulls confidently onto the freeway. Passing others requires just a modest step on the gas, and at 75 mph the car feels like it still has plenty of oomph left. The extra power doesn’t turn the Taurus into a lean machine, mind you — my all-wheel-drive test car, which weighed in at nearly two tons, felt hefty at all times. It moves quickly when needed, though, something the Five Hundred never did. Stick with front-wheel drive, and you shave off 189 pounds (about 5 percent of the car’s total weight), which is likely to create a payoff in sprightlier acceleration.

Most of the time, the transmission minds its business without creating too much drama. Occasionally it goes beyond the call of duty, finding the right gear in a pinch and sticking with it for strong acceleration down a straightaway. Other times it comes up short — prod the gas pedal from a stoplight, and the gear changes are jerky and awfully late.

Using the EPA’s stricter 2008 standards, gas mileage is rated at 18/28 mpg city/highway with front-wheel drive and 17/24 mpg with all-wheel drive. My mileage ranged from the mid-teens around urban Chicago to 26 mpg during one 30-minute freeway trip. The ratings represent a slight improvement over the Five Hundred’s when the 2007 numbers are adjusted to compensate for the new testing procedure. Here’s how they compare to the competition:

Four-wheel-disc antilock brakes are standard. The mushy pedal feel is typical for a large car.

The four-wheel-independent suspension combines a comfortable ride with unexpectedly agile handling. It sorts through potholes and expansion joints with little disturbance, and save for some wind noise off the A-pillar, the cabin stays relatively quiet on the highway. Hit some rough patches and there’s little of the floaty steering response you might expect from a full-size car. The wheels stay grounded, and the steering wheel turns with precision.

Body roll is noticeable, but the suspension firms itself up through any prolonged turns and stays reasonably level. The Buick Lucerne delivers something of the same unexpected cornering response, but generally speaking these dynamics are rare in large family cars.

The Inside
The Taurus keeps the Five Hundred’s interior, save for a few bits and pieces. Those who fancy a premium environment or imaginative design would do better in a Lucerne or Avalon, but for anyone who wants straightforward simplicity, the Taurus is right up there. The front seats sit high off the ground — Ford calls it Command Seating — which affords a high driving position and makes getting in and out of the Taurus a breeze. The eight-way power seat in my test car offered plenty of adjustment range for short or tall drivers. The seats themselves felt well-padded, if a bit narrow.

The dashboard doesn’t break any new ground in design or quality, but its usability deserves note. Buttons for the driver’s memory settings, trunk release and power-adjustable pedals sit within easy view to the left of the steering wheel rather than being tucked in the footwell, as in many cars. The gauges have large numbers that are easy to read, and the green and red nighttime illumination is vintage Ford. The dual-zone climate controls won’t win any style awards, but the large temperature buttons are easy to find, and their tailored quality rivals those of any luxury car.

Not that the Taurus passes for luxury: The center armrest is hard enough to dribble a basketball on, and the navigation system looks a few years behind in graphics quality. The overhead grab handles still slam against the ceiling when you let go — something most automakers addressed years ago with soft-shut handles. None of these issues are deal-breakers, but on the scale of user-friendliness, they keep the Taurus a few rungs below perfection.

Visibility is excellent, unhindered by swooping rooflines or chunky C-pillars. The side windows are tall, and the outside rearview mirrors could fit an SUV. I never wondered if I had missed something with my over-the-shoulder glances. Cars like the Nissan Maxima and Chrysler 300 seem downright claustrophobic in comparison.

The rear seat offers spacious accommodations, though the backrest was angled a bit far for my taste. The center floor hump is manageably low — unexpected, considering my test car had all-wheel drive. The trunk measures 21.2 cubic feet, easily the largest in its class. Should you need it (if you just bought, I don’t know, an armoire) the rear seats fold in a 60/40 split, a feature some competitors skip. The Taurus is the only one to offer a fold-flat front passenger seat; with it down, Ford says the car accommodates cargo up to 9 feet long. The setup would be perfect if it weren’t for the low backseat opening and the abrupt step from the trunk floor to the folded seatback. Many cars provide some sort of bridge between the two surfaces, even if it’s just a flap that extends from the seatback. Not here.

Safety
As safety ratings go, the Taurus is a solid bet. The Insurance Institute for Highway Safety awarded the car its highest rating, Good, for all three of its crash tests — front-impact, side-impact and rear-impact. Not surprisingly, IIHS named the Taurus a Top Safety Pick among large cars.

The six standard airbags include side-impact airbags for the front seats and side curtain airbags for both rows. The curtain airbags include a tip sensor to maintain inflation for several seconds if the Taurus rolls over. This feature is normally reserved for SUVs, which are more prone to rollovers, but it’s nice to have all the same. Four-wheel-disc antilock brakes and traction control are also standard. An electronic stability system is optional.

Four of the five seats have head restraints, and the Latch child-seat anchors for the outboard seats are spaced a few inches inward of the door. That locates properly installed seats farther away from potential side-impacts, and the inboard anchors are close enough to easily secure a seat in the center position — the safest spot for kids. Top-tether anchors for all three backseat positions are located on the shelf behind the seatback.

Features & Pricing
Excluding the destination charge, the SEL starts at $23,245. Standard features include alloy wheels, power windows and locks, keyless entry, a power driver’s seat and a CD stereo with an auxiliary jack for MP3 players. The $27,230 Taurus Limited adds larger wheels, heated leather upholstery, a power passenger seat, automatic climate control and an upgraded stereo. Most of those features are optional on the SEL. For either trim level, all-wheel drive adds $1,850. Later this year, Microsoft’s Sync system, which integrates cell phones, iPods and more, will be available. Other options include a moonroof, backseat DVD player, navigation system and rear parking sensors.

Taurus in the Market
The Taurus’ everyday usability and safety credentials deserve attention, and if the Five Hundred is any indication, reliability should be respectable, as Fords go. Best of all, the car is seriously cheap — it even starts below bargain-priced Korean models like the Hyundai Azera and Kia Amanti.

Combine that with its cargo dimensions and available all-wheel drive, and the Taurus seems destined to be a solid, if unemotional, choice. It might not achieve the everyman popularity of the original Taurus — or its modern-day successor, the Toyota Camry — but with this update, Ford should be able to take home a decent portion of the large-car market.

Shop cars for sale near you Research cars Compare vehicles
What Are the Best New and Used Cars for Teens?
May 25, 2022
10 Biggest News Stories of the Week: Toyota Camry Nightshade Steals Nissan Altima’s Shine
May 25, 2022
How Do Car Seats Fit in a 2022 Cadillac XT6?
May 25, 2022
See all latest news