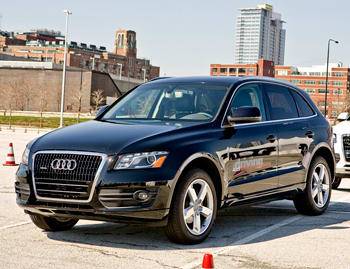 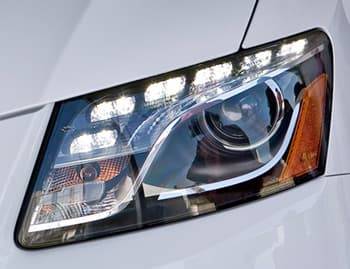 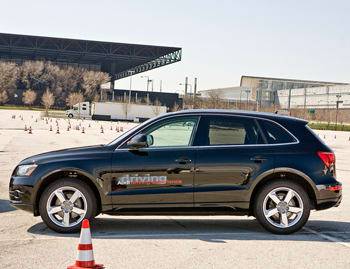 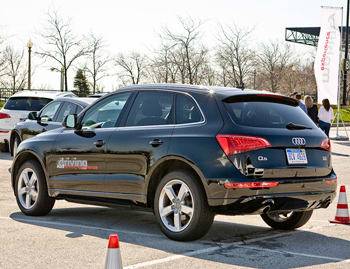 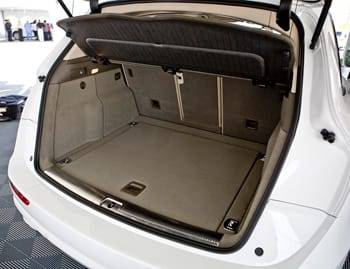 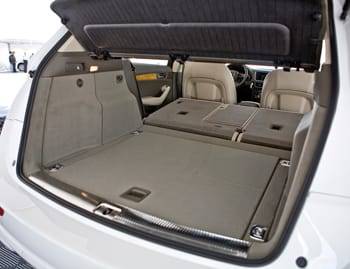 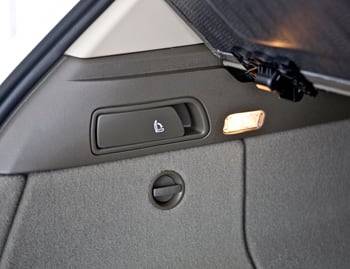 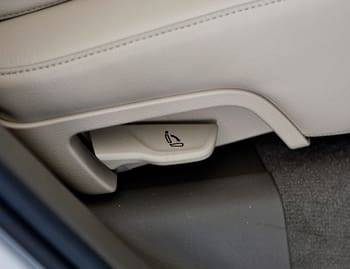 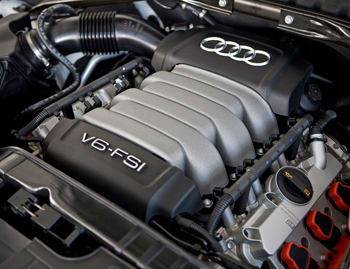 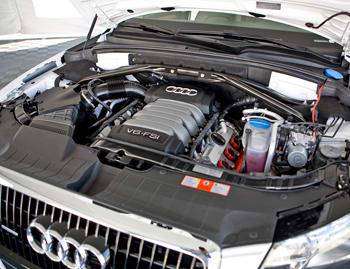 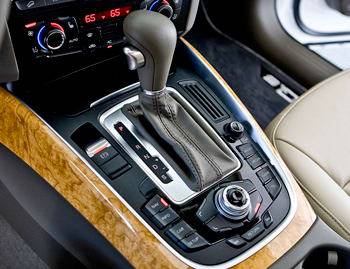 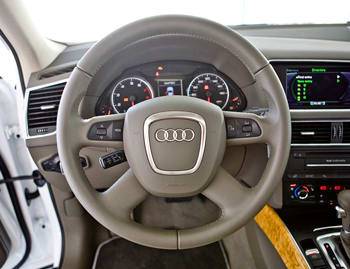 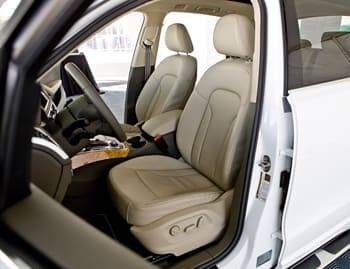 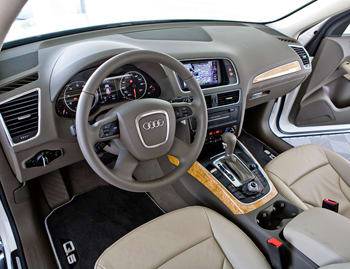 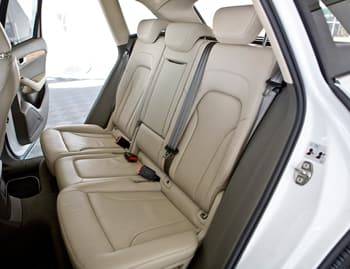 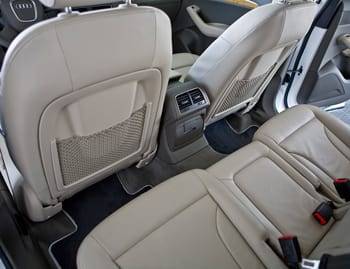 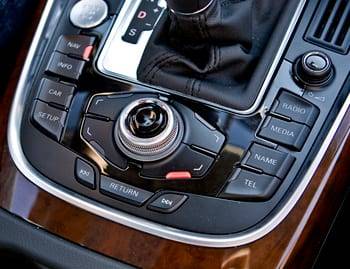 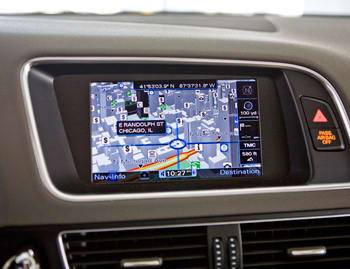 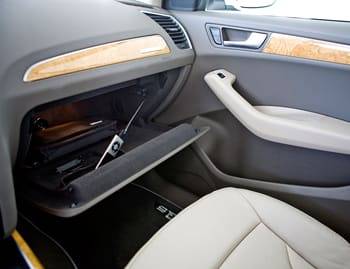 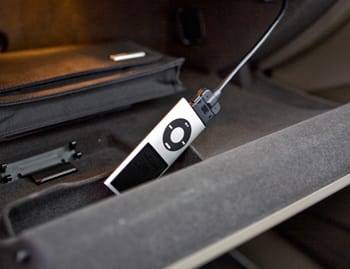 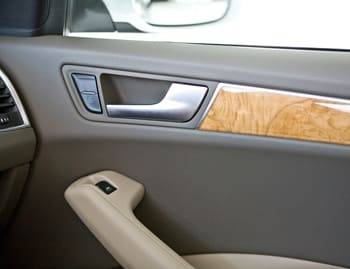 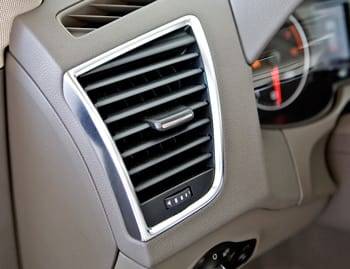 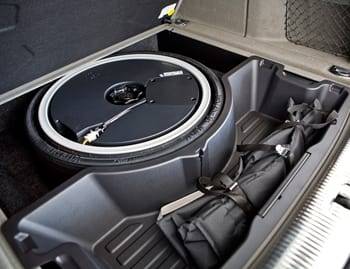 The Audi Q5 is a new compact crossover in the style of the BMW X3 and the new 2010 Mercedes-Benz GLK350 and Volvo XC60. It brings the count of Audi hatchbacks to five if you include the Q7 SUV, the four-door A3 and the Avant (wagon) versions of the A4 and A6. Where does the Q5 fit into this group? Well, you could say it’s a smaller Q7, but that would be both an insult to the new model and not entirely true. The Q5 is only 3 cubic feet smaller than the Q7 in terms of passenger space, which is one of the reasons I never liked the Q7 — it’s just not very roomy for its exterior size, plus it’s inefficient and has poor ride quality.

It will be a few weeks before we get an Audi Q5 for an extended test drive, so we accepted an invitation to spend a couple hours with one on the first truly warm day of the year here in Chicago. I’m pleased to report that the Q5 is not another Q7. It’s also not a dolled-up Volkswagen Tiguan, though the Q5’s appearance about a year behind VW’s first compact SUV would make that a reasonable assumption.

With the exception of the A3, the Q5 is shorter than the other Audi wagons in overall length, but it’s wider than all but the Q7. You can feel it in the interior, which has Audi’s characteristic comfort and high-quality materials. Unlike the Q7, the Q5’s overall roominess doesn’t disappoint, especially for backseat passengers, who get the same headroom as those in the Q7 and a bit more legroom, despite the model’s smaller exterior size. The 60/40-split backseat adjusts forward and back, so you can choose between backseat legroom and cargo space behind the seat. By the numbers, the Q5’s cargo volume is a bit less than that of the A6 Avant, but there’s a lot to be said for its taller space and wide hatch. The problem with the Avants is that their attractive lines come at the expense of cargo volume. The Q5 manages to provide a lot of usable room without looking too boxy or wagony in the back. A bonus is the plastic tub/tray under the cargo floor — it’s not unique, but it’s a handy size and can be easily removed; that’s rare.

Behind the Wheel
At first blush, I found the Q5’s ride quality firm — not bad, in a Q7 sense — but definitely tuned for a sportier driving experience. This was Audi’s stated goal, in which the platform and drivetrain come into play: The engine sits a little farther back than in a front-wheel-drive car, and the automatic transmission sends more torque to the rear wheels as a default, so you get the feel of rear-wheel drive and better weight distribution. Audi provides no specifications on it yet, but the balance felt better than the common front-wheel-drive weight split of 60/40 percent (front/rear). On an autocross course, I was able to use the accelerator to keep the nose from understeering, or pushing wide, though a slight lag in throttle response made it hard to time the changes correctly.

The Q5 felt a bit heavy when hustled through the switchbacks — neat and controllable, but heavy nonetheless. The car accelerates confidently but not urgently, hitting 60 mph in around 7 seconds, maybe less. Fortunately, whatever weight the Q5 carries doesn’t prevent it from reaching EPA mileage ratings of 18/23 mpg city/highway, which is on the high side in the luxury-crossover class.

We’ll save more detailed comparisons until we’ve had more time behind the wheel, but in terms of sporty driving the Q5’s main competitors are probably the Acura RDX, BMW X3 and especially the Infiniti EX35. If memory serves, the others are lighter on their feet, and the EX35 has better steering. For what it’s worth, though, the Infiniti has practically no backseat and a cargo area that’s nearly as small as the wee A3’s. I don’t know if the EX35 even belongs in this category, but it sure is fun to drive.

Cargo & Towing Advantages
With 4,400 pounds of towing capacity, the Q5 has a substantial advantage over its competitors, which max out at 3,500 pounds — if that much. The Q5’s innovative roof rack includes sensors in the roof rails that “know” when the standard cross-members are installed. When they’re in place, the standard electronic stability system assumes the Q5 has the higher center of gravity that comes with a loaded roof rack. According to Audi, competitors calibrate their stability programs only for the loaded scenario, which makes them too conservative and intrusive when the rack isn’t being used. (The Q5 sensors don’t detect weight — only the presence of the cross-members — so any owner who leaves them installed when not in use won’t enjoy any benefit.)

‘Q5 Requests Clearance for Landing’
The Q5’s optional navigation system uses an updated Multi Media Interface controller and offers more detailed map graphics. It shows 3-D representations of area landmarks — something Infiniti has done for years — and it also shows the shapes of lesser buildings when you zoom in. These would be a big plus when navigating an urban area … if you were in an airplane. I don’t know if these enhancements take anything away, but I think I’d trade the pretty pictures for more comprehensive street labeling — something I’ve been chasing for 13 years.

Safety
The Q5 has yet to be crash-tested, but it has a generous complement of safety features. Along with the frontal and side-impact airbags for the front seats, Audi has an affordable stand-alone option of side-impact (torso) airbags for the backseat. Standard side curtain airbags deploy over the side windows to protect front and backseat occupants. When equipped with the navigation system, the Q5 has a backup camera and sonar parking sensors in the front and rear. The mirrors are large and rear visibility is good, but for anyone who wants added protection, an optional blind spot warning system illuminates a light on the side mirrors if a car is in your blind spot. See the full safety feature list here.

Audi Q5 in the Market
The Q5 might have been a big success had it come out a few years ago. Its launch might be muted because the current economy makes for a tough atmosphere in which to introduce any new model, but its small size, fuel efficiency and lower price compared to larger SUVs and crossovers should make it appealing to shoppers. It’s small without being too small, efficient even for its size and sporty without making as many sacrifices as some competitors do. Overall, the Q5 has a nice balance of many attributes.