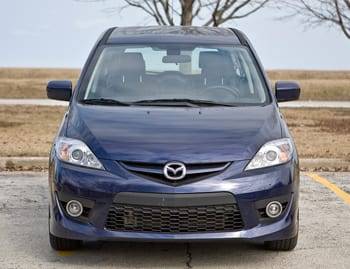 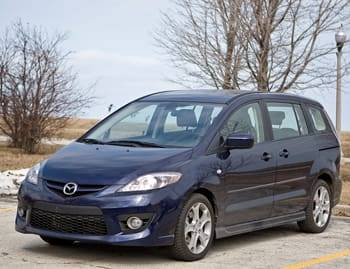 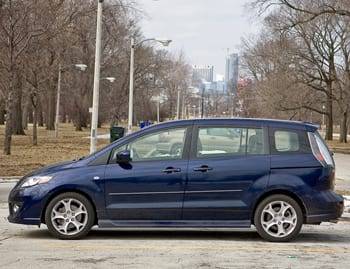 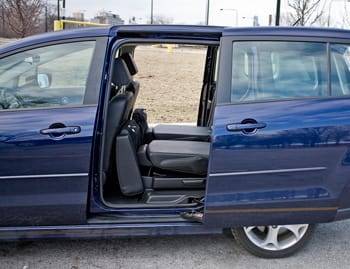 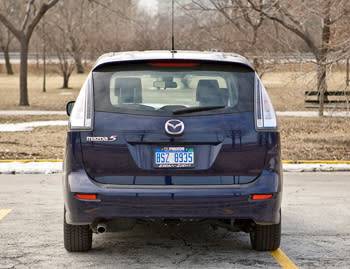 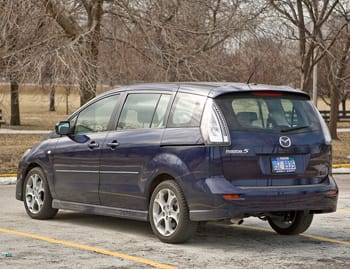 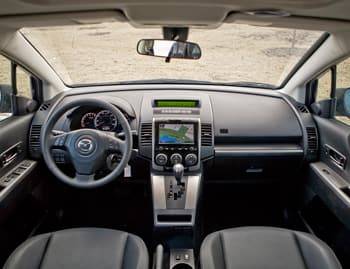 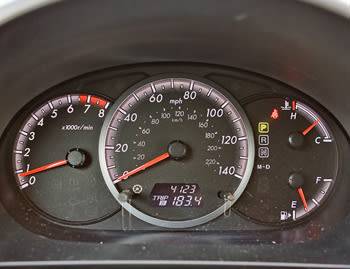 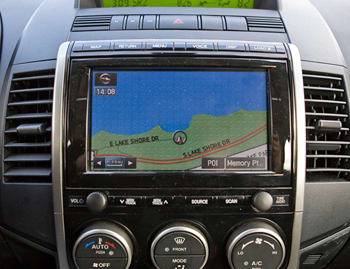 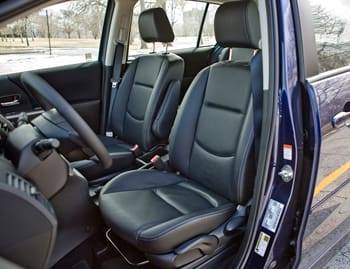 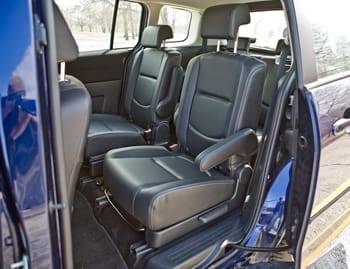 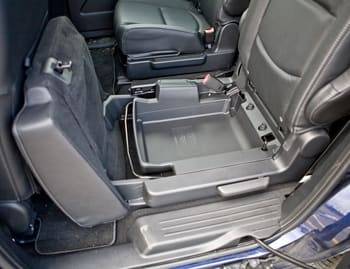 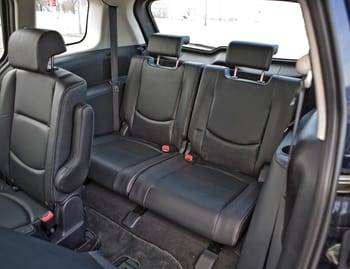 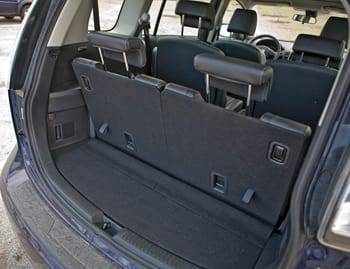 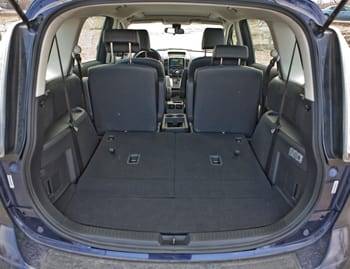 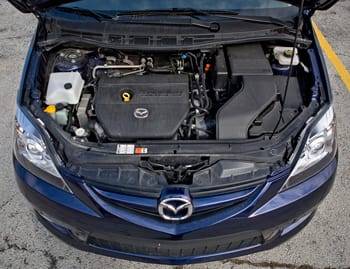 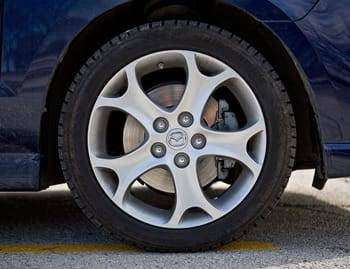 1/17
The Mazda5 receives styling updates for the 2008 model year, including a new grille and bumper design. The changes are subtle, however, and don&#39;t significantly alter the van&#39;s appearance.

Editor’s note: This review was written in April 2008 about the 2008 Mazda5. Little of substance has changed with this year’s model. To see what’s new for 2009, click here, or check out a side-by-side comparison of the two model years.

The Mazda5 minivan is fun to drive. That’s right: A minivan that’s fun to drive. How can this be? The secret’s in its size, as the six-person Mazda5 is significantly smaller than traditional minivans.

The benefits of this approach — sporty handling, minimal body roll and manageable dimensions — are readily apparent after only a short time behind the wheel. There are also, however, some significant drawbacks.

Exterior & Styling
If it weren’t for its sliding rear doors, the Mazda5 would undoubtedly be considered a hatchback rather than a minivan. Mazda says sliding rear doors offer easier access to the second- and third-row seats, and are easy to open in tight parking spaces (not to mention less likely to ding other cars when they’re thrown open by exuberant kids on a trip to the mall).

Though it retains the basic shape of a large minivan, the Mazda5 looks sporty nonetheless. It features a raked windshield; an aggressive front end that’s been restyled for 2008 with a new grille, headlights and bumper; a tapered roofline; and standard 17-inch alloy wheels. There are also new taillights for 2008, but the additions don’t markedly change the van’s appearance (see a side-by-side comparison with the 2007 model).

Ride & Handling
The Mazda5’s steering response is designed to engage the driver. A turn of the wheel delivers a quick change of direction, and there’s a fair amount of feedback. The suspension is on the firm side, but it provides a tolerable ride even on the broken pavement that’s prevalent near Cars.com’s Chicago headquarters.

Going & Stopping
All Mazda5s have a 2.3-liter four-cylinder engine that makes 153 horsepower and 148 pounds-feet of torque. It’s a smooth-revving unit that’s strong enough for its purposes, but it doesn’t have a whole lot of extra power and can sound buzzy at higher rpm. With a full load of passengers and cargo, it wouldn’t be hard for the normally adequately powered Mazda5 to be underpowered.

That said, with one occupant and limited cargo, the Mazda5 cruises easily on flat highways at speeds approaching 80 mph. The cabin gets a bit loud when going that fast, with both wind and road noise contributing to the din.

The four-cylinder teams with either a standard five-speed manual transmission or an optional five-speed automatic, which is new for 2008. The automatic transmission’s shifts are smooth, and it features a clutchless-manual mode. If you want the involvement a manual transmission provides, however, get the real thing. You’ll save some money, as the automatic costs an extra $950 and has slightly worse gas mileage: 21/27 mpg city/highway versus 22/28 mpg for the manual.

All-disc antilock brakes with electronic brake-force distribution and brake assist are standard. The setup stops the Mazda5 easily and pedal feel is natural, which is a plus.

The Inside
Here’s where the Mazda5’s small size catches up with it. When compared to larger minivans, there’s just not a lot of extra space behind the front bucket seats. The Mazda5 does, however, make efficient use of the space it has.

The front seats have noticeable side bolsters and are supportive enough to leave you feeling good even after hours at the wheel. They’re fairly snug, though, and may not be comfortable for all body types. They don’t slide especially far rearward to accommodate tall drivers, either.

The second row has two bucket seats that can slide forward and back for additional legroom in either the second or third row. The seats also recline rather far, and most adults will be able to get comfortable in them.

Adult comfort dips a bit in the 50/50-split third-row bench seat, but it’d be acceptable in a pinch for short trips. If anything, the third row will likely be the hangout for kids, and there’s enough space for them. The second- and third-row seats fold down to create a flat load floor stretching from the rear liftgate to the back of the front seats.

Give Mazda credit for devising a way to fit six people in relative comfort inside a vehicle that’s only about 5 inches longer than a Honda Civic sedan. The downside of this trick is that there’s very limited space behind the third row for any luggage when those six seats are occupied.

Safety
Standard safety features include side-impact airbags for the front seats and side curtain airbags for all three rows of seats. Second-row seats have Latch child-safety seat anchors and top tethers, but the third row only has top tethers.

Cargo & Towing
If it’s not carrying six occupants, the Mazda5’s measly cargo area can be expanded to 44 cubic feet by folding the third-row seat down. Fold the second- and third-row seats and there’s 70.9 cubic feet of total cargo room. Releasing the liftgate reveals a large opening to the cargo area, and the liftover height is sufficiently low to make loading small furniture easy. The Mazda5 is not rated for towing.

Mazda5 in the Market
The Mazda5 is alone in the small-minivan segment, and its closest competitors are likely four-door hatchbacks — including the Mazda3 — rather than traditional minivans like the Dodge Grand Caravan, Honda Odyssey and Toyota Sienna. That said, the Mazda5 manages to offer surprising utility in a package that’s not as mundane as many small cars, and that will appeal to some shoppers.