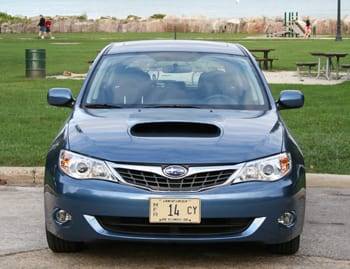 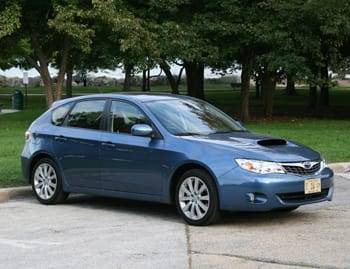 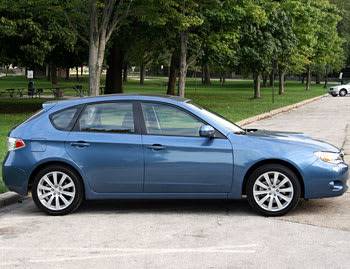 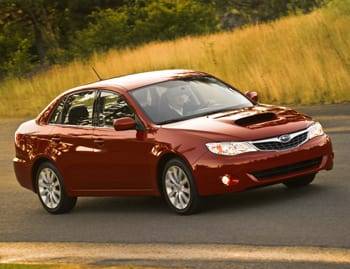 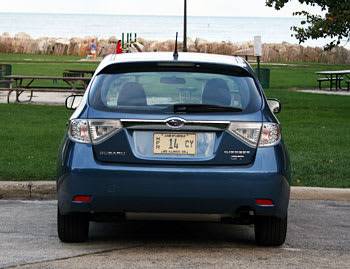 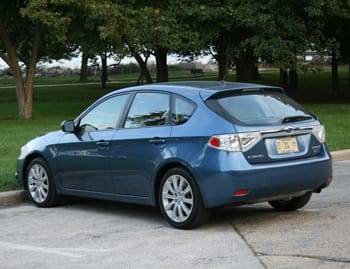 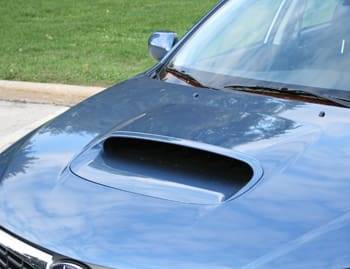 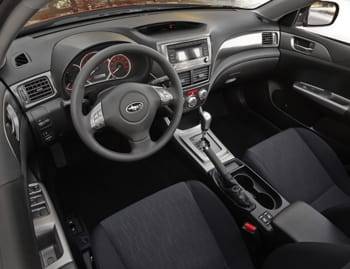 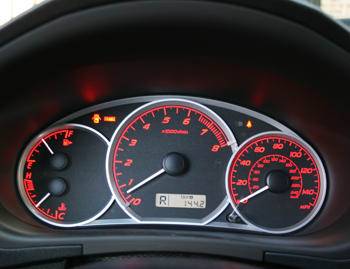 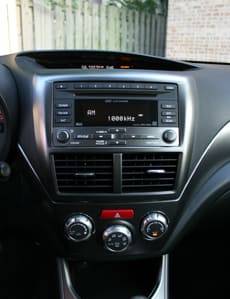 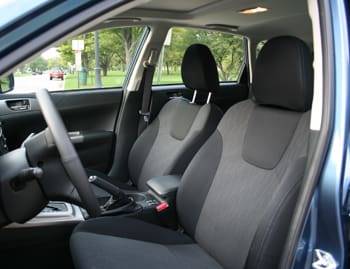 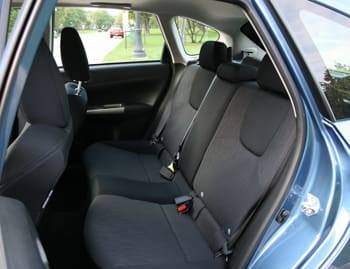 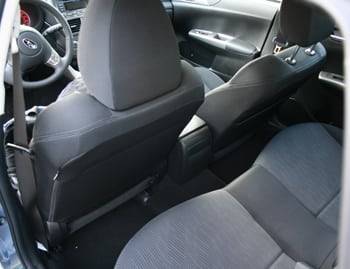 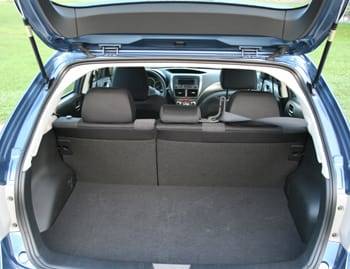 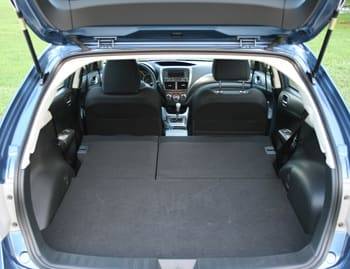 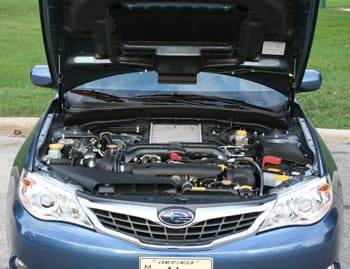 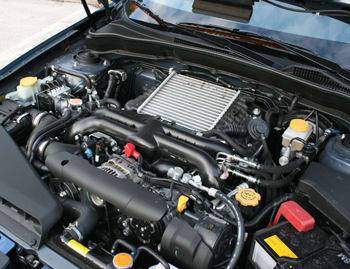 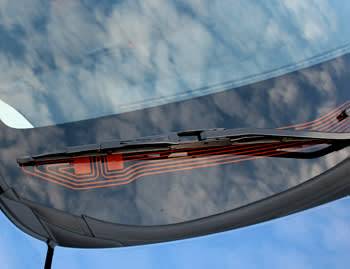 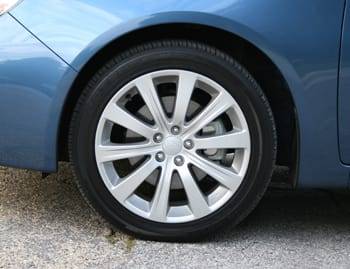 Even though the Impreza sedan and hatchback were redesigned last year, Subaru is still working on improving its compact car. For 2009, there’s a new 2.5GT trim level of the Impreza, and it uses the 224-horsepower engine that used to power the performance-oriented WRX.

That car has more power this year — as 224 hp is apparently no longer enough for a compact performance car — but fortunately Subaru didn’t do away with the horizontally opposed turbocharged four-cylinder that I thoroughly enjoyed in the 2008 WRX. In the new 2.5GT, it’s teamed with a four-speed automatic transmission (see a side-by-side comparison with the 2008 Impreza).

I tested the new 2009 Impreza 2.5GT hatchback and came away impressed with what Subaru has accomplished with this car. If you’re a hatchback enthusiast who likes a healthy dose of turbocharged performance now and then, the 2.5GT is a willing participant when you’re in the mood for some sporty driving.

However, the 2.5GT’s starting price is high, and if you’ve been inside competitors like the Volkswagen GTI, the Impreza might let you down somewhat in terms of its interior quality.

Styling
The Impreza is athletically styled, avoiding the bulbous look that plagues some hatchbacks, including the Pontiac Vibe. One of the 2.5GT’s most noticeable styling features is its hood scoop, which directs air to the intercooler that’s mounted atop the engine. The scoop is better integrated into the hood than some of Subaru’s previous ones, but it’s still large.

The rest of the 2.5GT’s styling is fairly reserved. Smooth body panels give the car a clean look, and a noticeable crease above the door handles stretches from the front fender all the way to the rear quarter panel, adding an interesting design cue. The back of the 2.5GT hatchback is finished off with a forward-sloping liftgate and a small spoiler.

Ride & Handling
There’s no question you’re going to feel the road when driving the Impreza 2.5GT, but while the sport suspension always lets you know when you’ve driven over a large bump in the road, the impact from those bumps and holes isn’t jarring to occupants. The shocks do a nice job absorbing impacts, and the car remains poised when driving on undulating roads. Body roll isn’t a problem when pushing the car hard through a corner, as the 2.5GT feels nicely planted.

The 2.5GT’s steering is worth highlighting, too, as it’s precise. It takes some effort to turn the wheel, as there isn’t a lot of power assistance, but that pays off when driving on the highway. The car doesn’t feel twitchy or skittish in those circumstances, but rather locked-in and ready to track wherever you point it. It doesn’t hurt that the steering wheel feels great in your hands, too, thanks to its thick leather-wrapped rim, which is standard.

Turbocharged Power
The 2.5-liter four-cylinder engine from last year’s WRX really is a hoot to drive, and it’s just as strong in the 2009 Impreza 2.5GT. Whether you’re cruising around the city or driving on the highway, mashing the gas pedal brings a broad band of power and the unique sounds of the boxer four-cylinder. There isn’t a high-pitched turbo whine to give away what’s under the hood, though knowledgeable people will know when they see the hood scoop. This kind of fun doesn’t come free, however, and the cost — in terms of gas mileage — is rather high, as the 2.5GT gets an EPA-estimated 19/24 mpg city/highway.

The 2.5GT’s four-speed automatic transmission didn’t skip a beat during testing — its shifts are smooth and refined, and it makes quick kickdowns when more power is needed for passing. All the same, it’s a little short on gears; five- and six-speed automatics are relatively common. Adding an extra gear or two would help the 2.5GT on the fuel economy front, too.

While the automatic transmission offers fine performance, I’m disappointed a manual isn’t offered in the 2.5GT; you now have to choose the new WRX or the high-powered WRX STI to get a manual transmission in a turbocharged Impreza.

What sets the 2.5GT apart from many of its competitors — along with the base Impreza — is that it comes standard with all-wheel drive. Subaru calls the system Symmetrical All-Wheel Drive, and in the 2.5GT it features an electronically controlled clutch that apportions power among the wheels. While some hatchbacks, like the Vibe and Toyota Matrix, offer all-wheel drive, few make it standard like Subaru has.

The 2.5GT has standard all-disc antilock brakes. The pedal has a nice, firm feel under your foot, and the brakes respond to small pedal-position changes with a corresponding change in braking performance.

The Inside
While it’s possible to get fairly comfortable in many cars, it’s not every day that you feel like everything is right in terms of your driving position, and that’s how I felt in the Impreza 2.5GT. Even though the driver’s seat has only manual controls, it’s adjustable for height, which is one of the more important ones, and I was able to raise the seat to a point where I had great forward views that weren’t obstructed — much thanks to thin roof pillars.

The 2.5GT also has a tilt/telescoping steering wheel (some trims only offer tilt) that I was able to pull closer for a relaxed arm position (some telescoping wheels don’t telescope enough). I could also push the wheel down fairly low, which is where I prefer it. Once I’d adjusted everything, all of the controls — the steering wheel, pedals, console shifter and buttons for the air conditioning and audio system — could still be operated naturally.

While the driving position is good, materials quality could be better. The fit and finish in the 2.5GT is acceptable, but the trim pieces themselves aren’t the most modern-looking; their surfaces are hard, and many have a shiny appearance. While this may have cut it a few years ago, it doesn’t today. Some details are also overlooked. The vanity mirrors in the sun visors aren’t illuminated, and a small storage bin under the center console armrest has exposed screw heads. You only have to look to the GTI to see how good interior quality in this segment can be.

Backseat passengers enjoy comfortable cushions. The backrest doesn’t recline, but at least it’s not overly upright, which can be uncomfortable. There’s headroom to spare, but taller passengers may not have enough legroom if another tall person is sitting in front of them.

Cargo
The Impreza hatchback has 19 cubic feet of cargo room behind the backseat, which is more than the four-door GTI (14.7) but less than the Vibe (20.1). The cargo floor isn’t especially deep, as a good 5 inches or so is taken up by the temporary spare tire located below it.

Folding down the hatchback’s 60/40-split backseat expands the cargo area to 44.4 cubic feet. The seatbacks are level with the cargo floor, so long items lay flat.

Safety
The Insurance Institute for Highway Safety crash-tested the 2008 Impreza, and the car earned a Good overall rating — the highest possible score — in frontal-offset, side-impact and rear crash tests (non-WRX seats). Those results apply to the 2009 model, too, according to IIHS.

Impreza in the Market
There’s no question the Impreza 2.5GT hatchback is good at what it does: It’s a fun-to-drive car that also offers a lot of utility in a small package. What’s less appealing is its $27,495 starting price, which is $2,000 more than the new Impreza WRX hatchback with its turbocharged four-cylinder that makes 41 more horsepower than the 2.5GT’s engine. The 2.5GT does come with more standard features, like a six-CD changer, heated front seats and a power moonroof, but you clearly pay for them.

Subaru offers a range of Imprezas, though, and value-oriented shoppers will gravitate toward base 2.5i hatchbacks that start at $17,995. That model doesn’t offer the turbocharged power of the higher trims, but it does include all the safety features and many of the convenience features.

At the same time, performance-hatchback enthusiasts seem likely to make a beeline for the more powerful WRX. With both of these models geared toward specific customers, the Impreza 2.5GT — despite all its strengths — could get passed over because of its high price.

Shop cars for sale near you Research cars Compare vehicles
How Should I Prep My Car for Sale to a Dealer?
May 17, 2022
2023 Cadillac Lyriq: Orders Open May 19, Price Creeps Up
May 16, 2022
2023 Toyota Camry Nightshade Special Edition Brings New Wheels, Paint Color
May 16, 2022
See all latest news