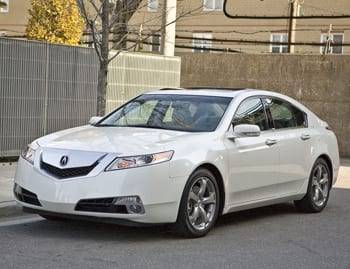 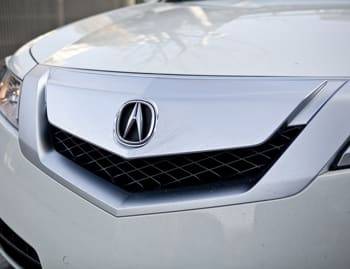 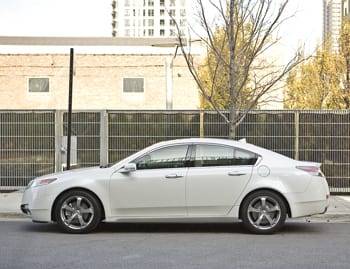 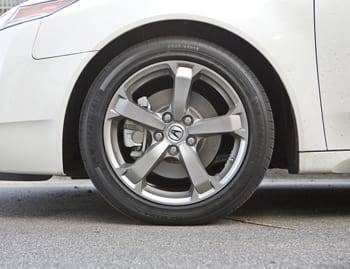 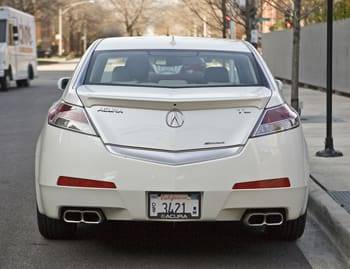 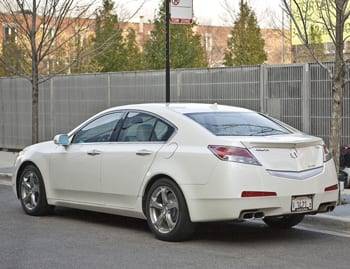 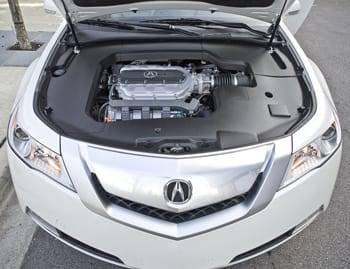 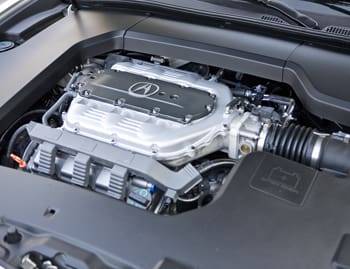 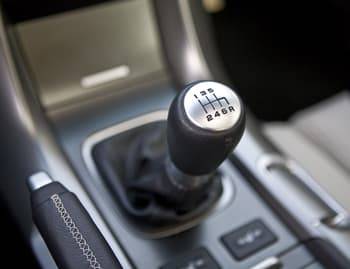 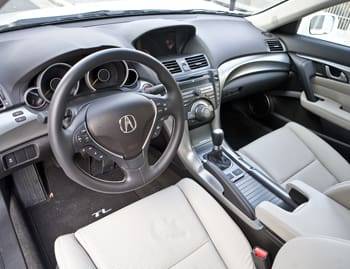 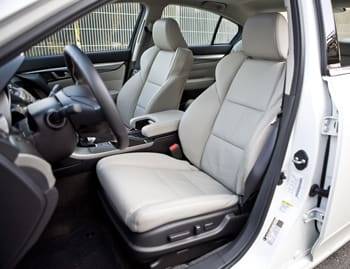 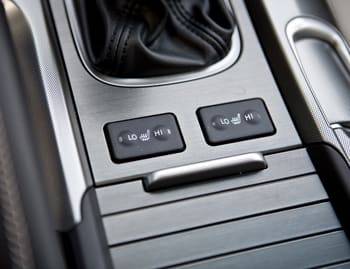 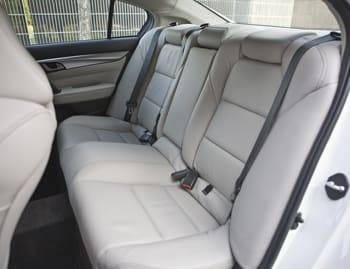 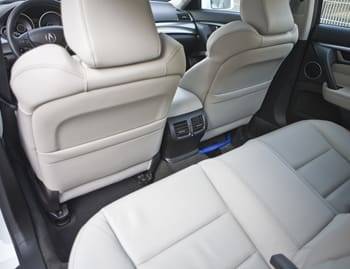 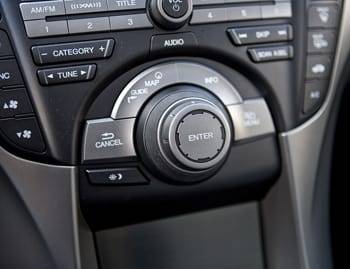 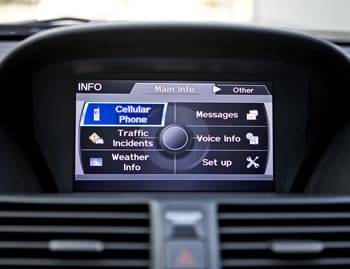 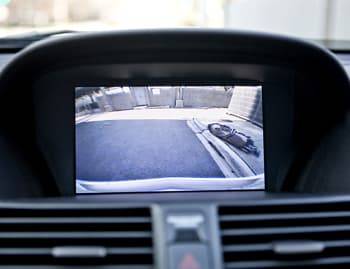 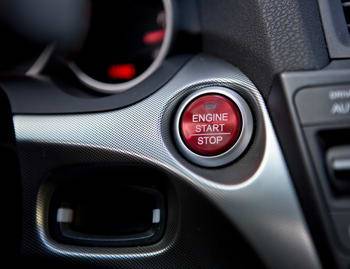 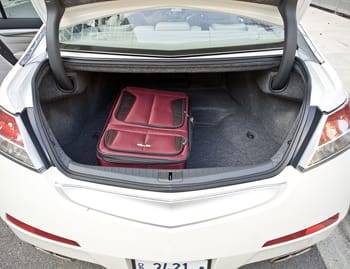 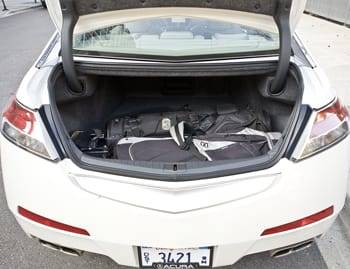 Shifting for ourselves is becoming a lost art among U.S. drivers, but for those who still prefer a manual transmission, there’s a new model to consider: the 2010 Acura TL. All-wheel-drive TLs can now be equipped with a six-speed manual.

The five-speed automatic that’s standard is a fine performer, but the new six-speed manual is a treat for enthusiast drivers; it delivers a sense of connectedness to the car that’s impossible to replicate with an automatic.

The Look
The TL, which was redesigned for 2009, has a unique design: Looking something like a concept car that escaped from an auto show, it features Acura’s controversial shield grille, which makes up part of the car’s protruding nose.

The TL’s flanks are relatively unadorned and conventional, but the designers amped things up at the rear, which incorporates many different angles, giving the trunklid a pinched look. The quad exhaust tips on all-wheel-drive models add to the design interplay. To see a side-by-side comparison of the 2009 and 2010 TL, click here.

V-6 Performance
The TL’s available 305-horsepower, 3.7-liter V-6 and six-speed manual transmission make a great pair. The V-6 pulls strongly even in higher gears, and it makes a great growling sound when you let it rev, though the engine itself remains smooth. It lets you have some fun when you want, but it’s also quite civilized when just cruising around town or on the highway.

The clutch pedal is light and the clutch engages easily, making smooth shifts and takeoffs a breeze. The six-speed manual has a short-throw shifter that slips into gears with a mechanical feel. The stick moves naturally through the gears, but the manual transmission available in the Infiniti G37 is a little more fun to shift. There’s no gas mileage penalty for choosing the manual transmission; like the automatic all-wheel-drive TL, it’s rated 17/25 mpg city/highway and takes premium gas.

Ride & Handling
While base front-drive and uplevel all-wheel-drive models have the same four-wheel independent suspension, all-wheel-drive versions come with different springs and shocks designed to improve the car’s handling characteristics. I tested the all-wheel-drive TL, and the suspension maintains good body control over dips and rises in the road, but ride quality is firm. It’s similar to what you’d experience in a G37, which is to say you’re going to feel road imperfections, but not to the point that you’d dread taking this car on a long road trip. One benefit of the firmer suspension tuning is that the all-wheel-drive TL doesn’t exhibit excessive body roll when cornering.

You can feel the system at work, even when roads are dry. You can sense the transfer of torque to the outside rear wheel when powering out of a turn, and it helps the TL feel more neutral and less nose-heavy than a traditional front-wheel-drive sedan. The system also helps prevent understeer; turns remains tight, as opposed to drifting wide of your intended path.

There’s definitely room for improvement where the TL’s electrically assisted power steering is concerned. The steering wheel turns with a light touch, which is nice when maneuvering at slow speeds, but it doesn’t tighten up noticeably when you get on the highway. That’s where a little more heft to the wheel is appreciated. There’s also hardly any steering feedback, which is problematic in a car with sporting intentions. Acura says steering is weightier in models with the six-speed manual, but it needs to be even more so.

The Inside
The TL’s cabin is sporty-looking, featuring a four-gauge instrument panel and a three-spoke, leather-wrapped steering wheel. Heated leather bucket seats are standard, and upgraded leather upholstery is included with a $3,730 Technology Package, which is automatically added to TLs with the manual transmission. The driver’s seat is quite comfortable and should be able to accommodate a variety of people thanks to its generous width. Using the front seats’ standard power adjustments, I was able to find a comfortable driving position from which all the essential controls — steering wheel, pedals and shifter — were within easy reach.

There is some upscale trim in the TL, including a soft-touch dashboard, but many of the plastic pieces, like the door release and grab handles, don’t look appreciably nicer than what you’d find in a Honda Accord. While the Accord compares well with mainstream family sedans in terms of interior quality, the similar materials in the TL don’t seem upscale enough for a car that starts around $35,000.

Acura’s navigation system, which is included with the Technology Package, uses an 8-inch screen positioned high on the dash. The system is operated by a large knob in the center of the dash. It’s fairly easy to get accustomed to the knob interface, and when you don’t want to use the navigation system you can turn off the screen and still access audio functions via a grouping of buttons on the center control panel. The Technology Package also includes a backup camera, which is a worthwhile safety feature.

The TL’s rear bench seat is reasonably comfortable for taller adults, with adequate legroom and headroom, plus a stadium-style design so you get good views forward over the front seats. The hump in the floor that’s necessary to accommodate the driveshaft isn’t overly tall for an all-wheel-drive car, though it is wide. There’s a fold-down center armrest and a trunk pass-through behind it, but the seatback doesn’t fold down in either front- or all-wheel-drive models.

Safety
The TL received Good overall scores — the highest possible — in the Insurance Institute for Highway Safety’s frontal-offset, side-impact and rear crash tests. As of publication, it hasn’t undergone IIHS’ new roof-strength test, and as such it isn’t eligible for the Institute’s 2010 Top Safety Pick designation. (To qualify, it needs to score Good in this test, too.)

Standard safety features include antilock brakes, side-impact airbags for the front seats, side curtain airbags for both rows, active front head restraints and an electronic stability system. Check out all the TL’s safety features on the Standard Equipment & Specs page.

TL in the Market
I applaud Acura for spending the time and money to make a manual transmission available in the TL, even if the stick-shift model is unlikely to make up a large portion of TL sales. The decision speaks to the automaker’s commitment to driving enthusiasts who prefer the enhanced level of control a manual offers.

We’ve noticed that many Cars.com readers are interested in cars with all-wheel drive. The TL’s available SH-AWD technology delivers impressive handling performance, and the car is one of the few larger luxury sedans to offer all-wheel drive and a manual transmission. The BMW 5 Series is another such model, but it costs significantly more. While there might be relatively few people looking for this combination, if you count yourself as one of them, the TL is an appealing entrant.