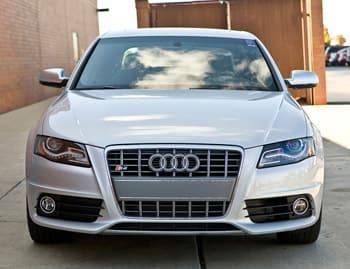 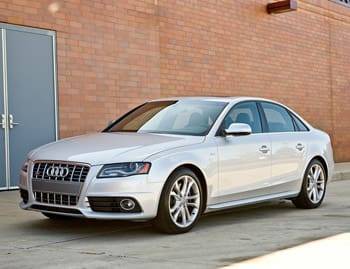 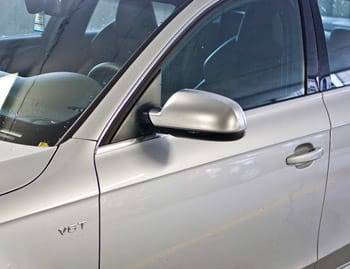 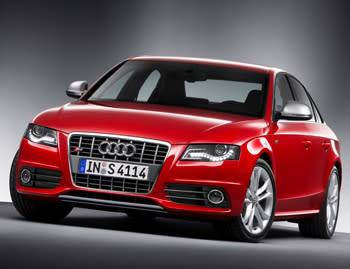 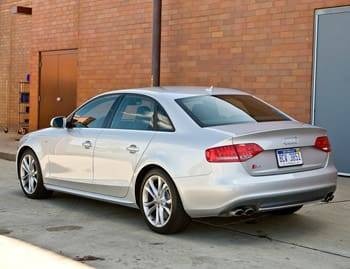 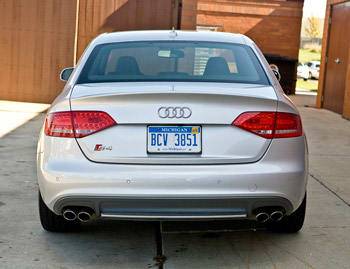 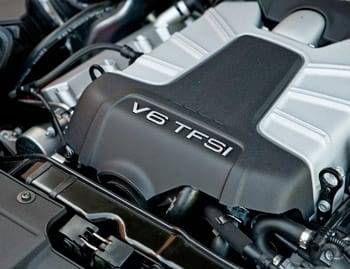 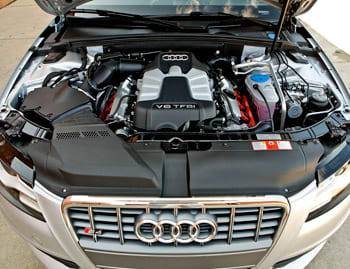 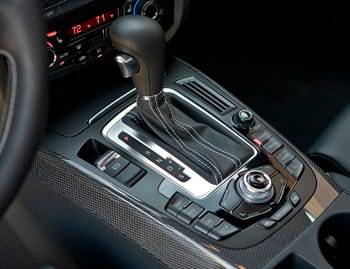 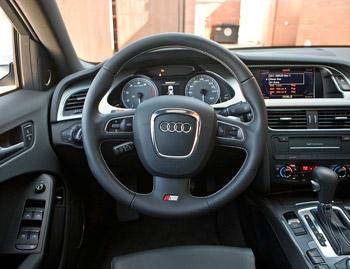 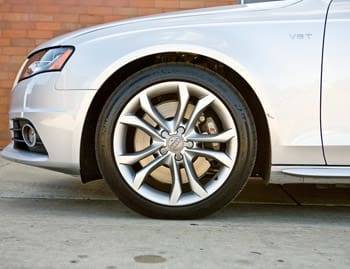 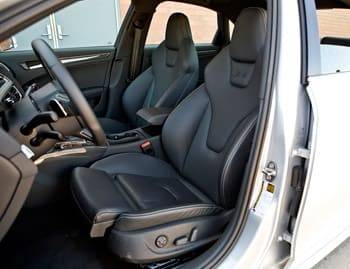 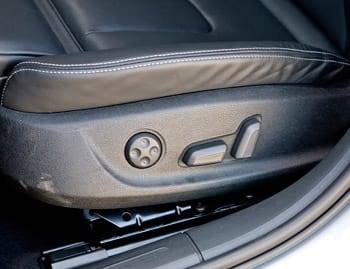 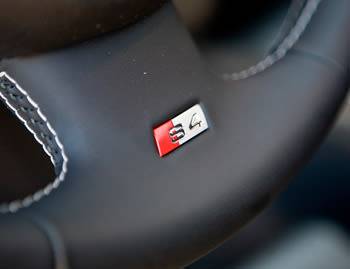 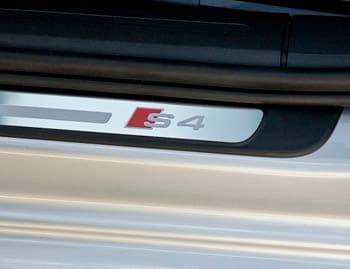 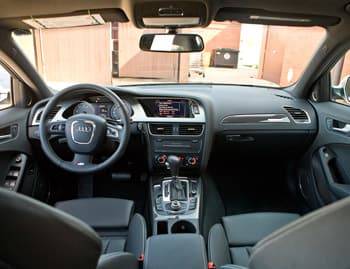 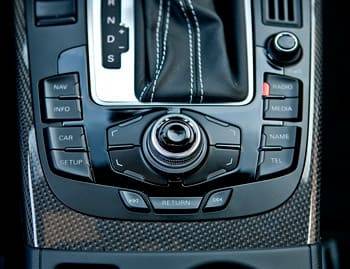 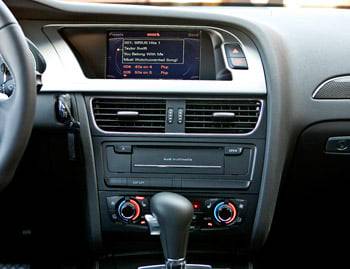 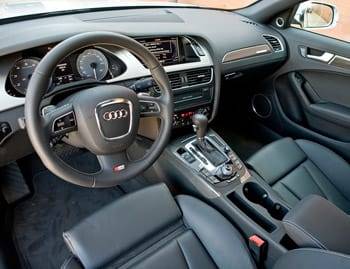 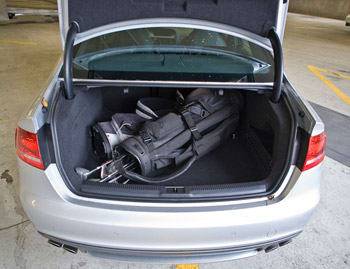 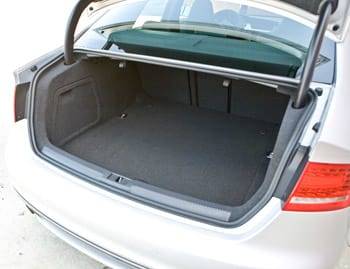 The 2010 model year marks a new generation for the Audi S4, a souped-up sports sedan version of the A4, itself redesigned for 2009. The supercharged V-6 gives up nothing to the previous generation’s V-8 — except dismal mileage and an associated gas-guzzler tax, thankfully. Improved all-wheel drive, a more comfortable ride and a lower price make this a better package overall and a nice upgrade from the regular A4. (See them compared here.)

This year, as last, there are sedan and wagon (Avant) versions of the regular A4, but there’s no S4 Avant. The sports sedan has a 333-hp, supercharged 3.0-liter V-6. Here’s how the S4’s engine stacks up against the A4’s and the previous-generation S4’s:

Astute readers will notice that the Audi S4 is called a V6T even though it has a supercharger rather than a turbocharger. Pretty silly, if you ask me. While I’m picking nits, the engine cover says TFSI, which is another T in search of meaning, as well as an S that doesn’t stand for supercharger: FSI stands for fuel stratified direct-injected, where “stratified” is another word for a super-efficient lean-burn mode. Unfortunately, this mode leads to higher emissions, so the engine doesn’t burn lean in the U.S. That leaves us with FI, fuel injection, which can be boasted by every car sold in the U.S. for more than a decade. Even without lean-burn, the S4’s mileage is 18 mpg city and 27-28 mpg highway — impressive overall, and a good 6 mpg improvement over the previous generation S4.

Superficiality aside, the engine delivers. Anyone who remembers the twin-turbo V-6 that powered the S4 two generations ago can rest assured that direct injection and a well-implemented supercharger have eliminated any sign of lag. The S4 sprints from zero to 60 mph in 5 seconds or less. I’d have preferred a six-speed manual transmission in a car like this, but ours had the new seven-speed dual-clutch automated manual called S-tronic. Like all of these proliferating units, S-tronic has fully automatic Drive and Sport modes and the ability to shift manually. S-tronic lets you do so with the gear selector or steering-wheel paddles; some cars only offer one or the other.

Like all dual-clutch systems, the Audi S4’s has its pros and cons. Its best attribute is how smoothly it takes off from a standing start. Some of these systems still jerk a bit. Like all others, S-tronic upshifts instantaneously — smoothly in Drive mode and a little harder and more efficiently in Sport mode, accompanied by a slight blat out the exhaust pipes. I loved the blat. With the V-8 rumble a memory and a supercharger so quiet I questioned its existence, the blat was all I had.

S-tronic’s downsides involve the downshifts, which are a bit slow in comparison with the upshifts, and the fact that you feel the transmission downshift sequentially as you brake to a stop — even when in Drive mode. It makes the braking feel nonlinear. Conventional automatics don’t do this, or they do it unnoticeably. Another shortcoming is the specklike size of the gear indicator, which is lost in the cluttered instrument panel LCD. If you’re shifting manually, you want to know which of seven gears you’re in. In some cars, this numerical readout is the size of your thumb.

Ride & Handling
I must qualify my comments about the Audi S4’s handling because of less-than-optimal circumstances. The S4’s performance options include an adaptive suspension, variable-assist “dynamic” steering and a Sports Rear Differential to complement the standard Quattro all-wheel drive by overdriving the outside wheel in turns. Somehow we managed to land the full-on performance-dilettante’s version, lacking all these features and the stick shift. More important, our test car was fitted with winter tires, and the temperatures were quite mild — not a recipe for exceptional roadholding.

The S4 comes standard with summer performance tires, and all-wheel drive isn’t enough to overcome their slippery characteristics when it’s cold. Winter tires are a good idea; it was just too soon.

On the upside, having the base suspension — the one that doesn’t let you choose between comfort and sport settings — proved how comfortable the S4 is for a car of its type. The new generation’s wheelbase has grown 6.3 inches, and that’s a lot for a wheelbase and its effect on ride quality. Though the car’s limits were easier to reach than they would have been with summer or all-season tires, I still got a feel for the car’s dynamics, and they’re quite good. Even without the limited-slip rear end, it’s poised and controllable.

The absolute biggest improvement over the previous generation involves Quattro. Unlike previous generations, which had a default torque split of 50/50 between the front and rear wheels, the 2010’s all-wheel drive sends 60 percent to the rear wheels, which gives the car more of a rear-wheel-drive feel. I appreciated Quattro in its previous incarnation, but most Audis, including the S4, are nose-heavy. Even though the V-8 is gone, the 2010 remains nose-heavy as well, with a tendency to understeer, but the rear torque bias makes it easier to control the rear end and rotate the car on its axis. This could be enough to sway some Audi detractors.

Exterior & Styling
As always, the Audi S4 is a sleeper — a car with above-average performance that doesn’t advertise it much — but some things do distinguish it from the A4, including a distinctive grille, front bumper and rocker-panel moldings. A subtle upturn of the trunk-lid’s trailing edge forms a rear spoiler, and the quad tailpipes emerge from an exclusive rear diffuser. It didn’t stand out on our silver car, but the side mirrors have an “aluminum-optic” finish that also appears as trim below the front and rear bumpers.

Sadly, we can now add “aluminum-optic” to the glossary of euphemisms for imitation materials, along with leatherette (not real leather) and woodgrain (not real wood). At one time, the side mirrors were capped with real aluminum, but that changed, silently, in 2006.

The Inside
The car’s interior will always remind you what you’re driving, with Audi S4 logos on the door sills, steering wheel, backrests, instrument panel and key fob. Also exclusive are the black headliner and some color choices. Audi says brushed aluminum trim is standard, but our test car had the optional carbon fiber trim. Stainless steel and gray wood trim are also offered.

I liked the sport seats because they’re well-bolstered around the torso but not too restrictive higher up, and the bottom cushion’s bolsters aren’t so prominent as to impede getting in or out. The thigh extension is a plus, but the gap it creates seems to collect dust and crumbs more effectively than a vacuum cleaner. Typical of sport seats, the head restraints are integral to the backrest, which means it might be positioned properly for someone, but adjustable designs — which have begun to appear on sport seats — would be better for everyone.

Audi has long been a leader in top-of-the-line interior quality, and the new S4 four-door is still good, but a couple of the surfaces, such as the expansive bezel around the instruments and navigation screen, are borderline. The shift paddles appear to be the dreaded aluminum-optic. I wouldn’t say Audi is slipping, but the competition has upped its game enough that Audi needs to step up the innovation.

Other optional interior upgrades include the Bang & Olufsen audio package.

Safety
The Insurance Institute for Highway Safety rated the 2009 Audi A4 a Top Safety Pick, meaning it has top scores in frontal-, side- and rear-impact crash tests. The crash results apply to the S4, but note that in 2010 roof-strength tests will be a factor in Top Safety Pick status, so any current designee could lose its citation if its roof strength is below the standard.

The S4’s standard safety features include six airbags, with side curtains for the front and rear seats as well as seat-mounted torso airbags for the front seats. If you want similar side bags for the backseat — which can pose a hazard for small children — they’re a stand-alone option. Antilock brakes and an electronic stability system with traction control are also onboard. As mentioned above, we recommend all-season or winter tire replacements for wintry climates. They’re technically not a factory option, but the A4 runs on the same sizes, so an Audi dealer should be able to hook you up. For a full list of safety features, click here. You can also get a blind spot warning system and a backup camera in option packages.

For the extra money, there are some features standard in the S4 and not the 335i: HomeLink, partial-leather seats, Bluetooth compatibility and an alarm system. The 335i counters with adjustable head restraints.

Audi kindly groups the Drive Select performance options our car lacked in a single package for $3,950, raising the price to $49,850. Packed with every performance, comfort, safety and cosmetic option we could squeeze in, the S4 tops out at $63,616 including the destination charge. But if what you want is more performance, you can hope Audi brings back the RS 4, which historically has competed with the M3 both on the window sticker and on the track.