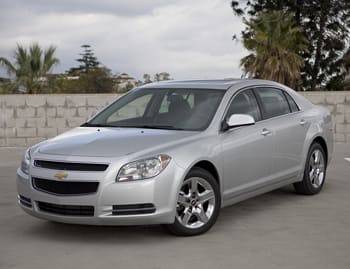 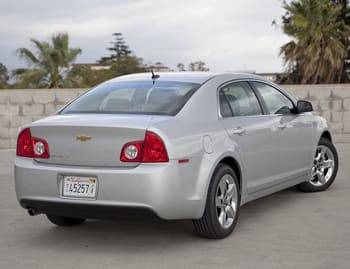 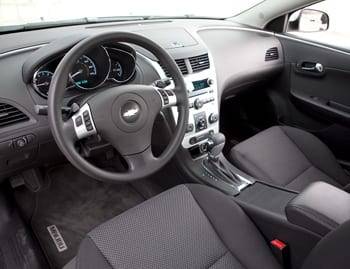 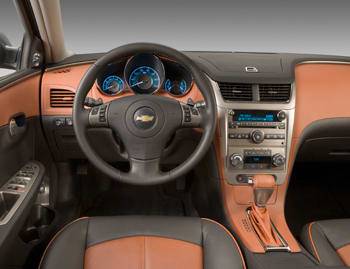 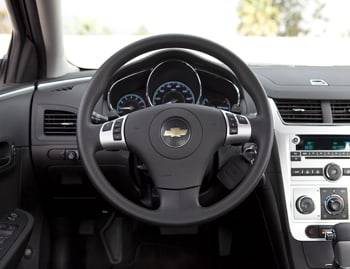 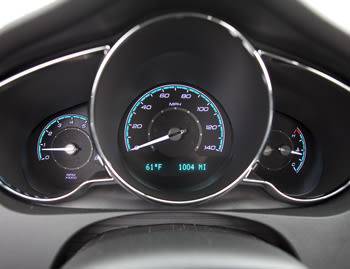 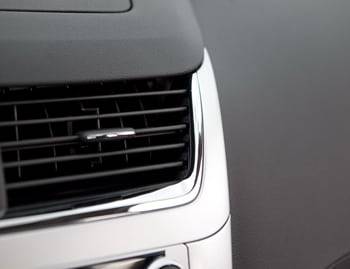 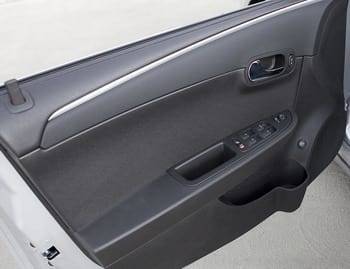 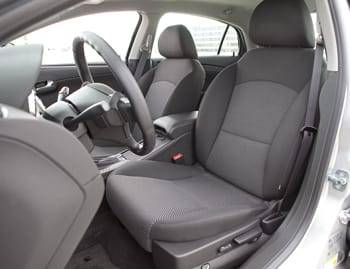 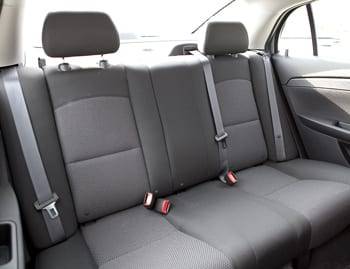 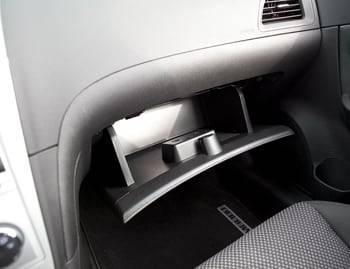 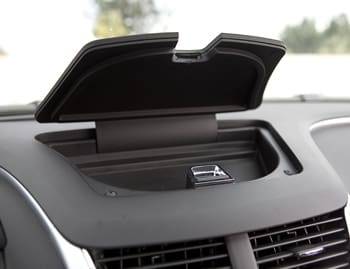 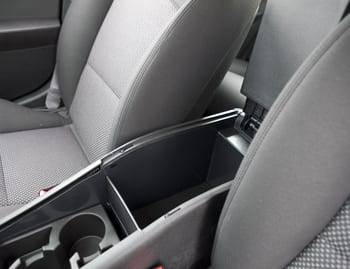 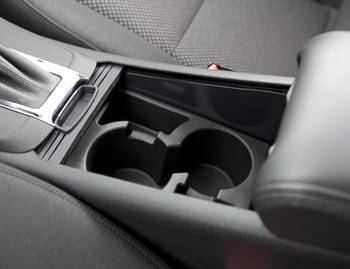 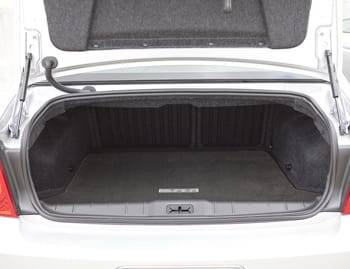 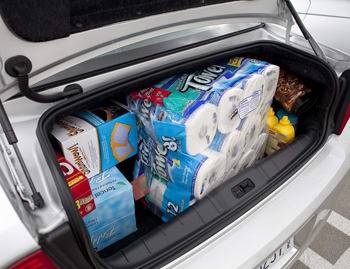 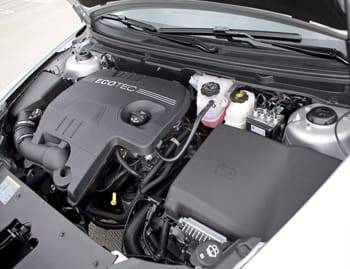 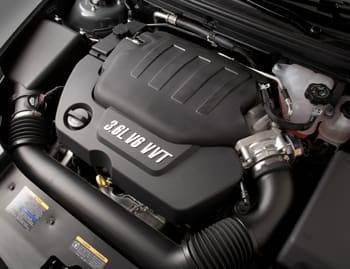 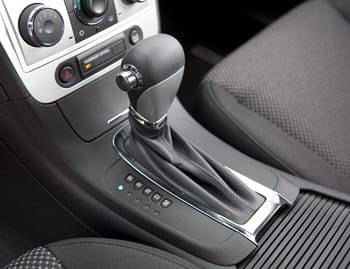 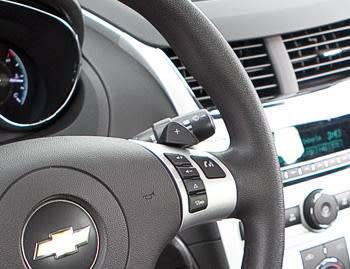 1/20
You wouldn&#39;t believe it from the Malibu&#39;s squared-off tail, but this is actually the narrowest car among the segment&#39;s 11 major nameplates. Seventeen-inch steel wheels with plastic covers (shown) are standard on most trims; their carved-out de

Years after a dramatic redesign for 2008, some areas of the Malibu have stood the test of time, while others — the drab interior, the pokey four-cylinder — feel more Hertz than high-rent. Thanks to its blend of ride comfort and handling, the Malibu demands a look from shoppers, but much of the current generation’s early praise was simply a product of its being a vast improvement over the old Malibu. It’s time for GM to leapfrog the competition, not just itself.

The front-wheel-drive Chevrolet Malibu comes in four trims — entry-level LS, 1LT, 2LT and top-of-the-line LTZ. Stack them up here, or compare the 2010 and 2009 Malibu here. An automatic transmission and four-cylinder engine are standard. The 2LT and LTZ have an optional V-6 powertrain; last year’s Malibu Hybrid has been discontinued.

Bold Styling
We tested a four-cylinder Malibu 1LT as part of an eight-car family-sedan shootout, and opinions about the Chevy’s styling were mixed. Once lauded as bold and unabashedly American, some editors now declared the Malibu’s two-bar grille and squared-off rear stale.

For the record, I’m not one of them. Lined up side-by-side, a lot of the front-runners in this segment bear patent similarities: some combination of thin headlights and widely stretched grilles. The Chevrolet Malibu looks unique — in a good way. Beware, though: The car’s broad rear shoulders hamper driver visibility.

Seventeen-inch steel wheels with plastic covers are standard. Because the underlying wheels, as well as the covers, have spokes, most onlookers won’t know they aren’t alloy wheels. The Malibu 1LT adds body-colored mirrors, while the 2LT upgrades to bona fide 17-inch alloys. LTZ models have 18-inch rims and fog lights; all V-6 models get dual tailpipes.

The Inside
The cabin, though simply arrayed, is hit-and-miss. Our test car’s cloth seats had durable, lint-repellant upholstery, with cushions long enough to provide thigh support for adults. Editors were split on overall comfort, however. I found it acceptable, and editor Jennifer Newman enthused about the bolstering support. Senior editor David Thomas, on the other hand, likened the seats to cloth-covered torture devices.

The backseat offers good legroom and decent headroom, but adults may find the bench too low to the floor. A center armrest isn’t available; that means two kids won’t have any barrier to discourage bickering. More concerning: The rear head restraints don’t retract into the seats, and they obstruct a 6 o’clock view that’s already limited by the hefty C-pillars. (Some drivers might even remove them entirely — I’ve seen it done elsewhere — which poses a safety hazard for rear passengers.)

Materials quality was par for the course a few years ago, but now it’s slipped behind. Upper dash textures look fine, but the doors are shod in uninspired plastics and sport rock-hard armrests. Chevy’s spindly three-spoke steering wheel is long overdue for retirement. It’s odd, given that GM outfits its crossovers and SUVs — and, ironically enough, the old Malibu — with a higher quality four-spoke wheel.

There are a few things to praise: The stereo displays a station name or call letters above each preset key, rather than just a number, and you can program AM, FM and XM Satellite Radio stations into the same list of presets. The gauges are simply arrayed and easy to read, and the automatic gearshift slides precisely from Park to Drive.

Trunk volume is a competitive 15.1 cubic feet, but the trunk opening is small. Check out the photos to see. One plus: The split, folding rear seat has a durable plastic backing, making the Chevrolet Malibu one of the better sedans for transporting carpet-snagging cargo.

Behind the Wheel
The base 2.4-liter four-cylinder makes 169 horsepower, but the Chevrolet Malibu is a heavy car — 100 to 300 pounds heavier than most competitors — so acceleration is leisurely. The six-speed automatic has longish 1st and 2nd gears. At highway speeds, convincing the engine to kick down requires a good prod on the gas, and on curvy roads the transmission resists shifting to a lower gear to get you through corners until precious seconds after you wanted it to. Though one gear short of the competition, the five-speed automatic in the four-cylinder Mazda6 is far quicker to the punch; the four-cylinder, CVT Nissan Altima, meanwhile, might convince passengers it has a small V-6.

The Chevrolet Malibu LS has a four-speed automatic, which we’ve driven. Upshifts are smooth, and highway kickdown is swifter than with the six-speed. Gas mileage takes a nominal hit, however, and the longer gears make for even more tepid acceleration.

Chevrolet Malibu shoppers who want more power will have to opt for the 252-hp, 3.6-liter V-6. It uses a six-speed automatic, and we’ve driven it as well. It can’t quite match the Toyota Camry’s V-6 rush, but its capabilities run about even with the rest of the V-6 segment.

Gas mileage with the four-cylinder and four-speed automatic is 22/30 mpg city/highway; the six-speed auto bumps that up to 22/33 mpg. The V-6 is relatively thirsty, returning mileage of 17/26 mpg.

No matter the drivetrain, the Malibu finds a nice middle ground between ride comfort and engaging handling. The former is excellent: Highway pitter-patter goes virtually unnoticed, and the suspension soaks up bumps large and small, isolating the cabin in a way only the Camry can beat. But the Malibu handily out-handles its Toyota rival: Encounter a curvy road, and the car points where you want with unexpected precision. The Camry and Hyundai Sonata feel nose-heavy in comparison, unschooled at quick maneuvers. While the Malibu is no Honda Accord or Mazda6, the fact that it comes close — and rides far better — deserves praise. (I’d be remiss not to point out that Suzuki’s new Kizashi packs nimbler handling, with remarkably generous ride comfort to match.)

The Chevrolet Malibu steers with light effort at low speeds, but its 40.4-foot turning circle is embarrassingly wide. (A Chevy Tahoe full-size SUV takes 39 feet; in this class, 37 feet is about the norm.) At highway speeds, the wheel firms up. I didn’t need to make too many corrections to stay on course.

Four-wheel-disc antilock brakes are standard, but the pedal feels murky the first couple inches down. Braking response is strong after that, but it’s hard to fine-tune your stops.

Parents should note that the Malibu has three sets of Latch anchors in back, rather than the usual two. That means a Latch-compatible child seat could be installed in the safest position, the center. Reliability for the current-generation Malibu is decent, with V-6 models rating slightly better than four-cylinder ones.

Nuts & Bolts
The Malibu LS starts at $21,825 — on the high side for family sedans, less so when you consider that the automatic transmission is standard. Other standard features include power windows and locks, remote keyless entry, cruise control, air conditioning, power height and lumbar adjustments for the driver’s seat, and a CD stereo with an MP3 jack. A USB/iPod input, dual power seats, a moonroof and heated leather upholstery are optional. On 2LT and LTZ trims, the V-6 runs well under $2,000. Check all the boxes, and a V-6 LTZ tops out around $33,000.

A factory navigation system is unavailable, but GM’s OnStar system with a year of upgraded Directions and Connections service is standard. The service allows OnStar to track your location and send real-time directions to the radio display. I’ve used it in other GM vehicles, and though it lacks many functions of a full navigation system — like being able to look around on a map — it gets you where you need to go. After the initial free yearlong subscription expires, Directions and Connections runs $29 a month.

Malibu in the Market
All told, the Chevrolet Malibu’s strengths — particularly ride quality — should still earn it a steady stream of buyers. What it needs to earn family-sedan leadership, or at least to share the pedestal with the big guys, is an overhauled cabin and a bit more power. Today’s Malibu is an RBI single; I’m waiting for Chevrolet to hit a bases-clearing double.