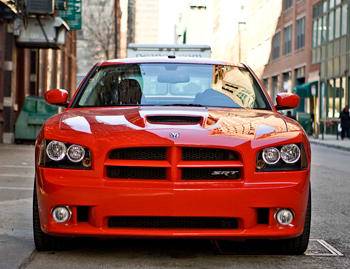 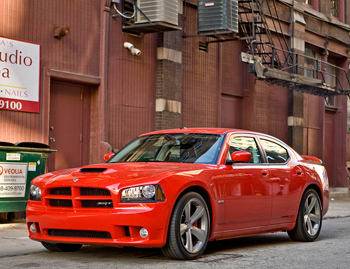 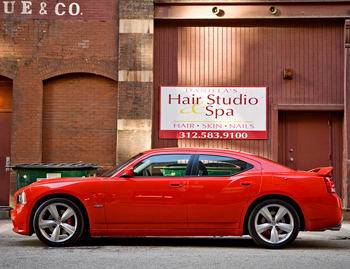 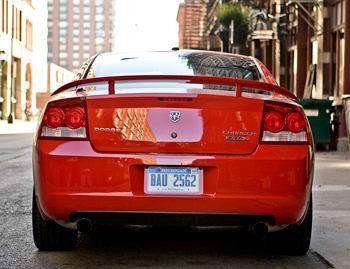 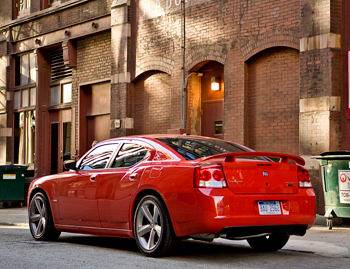 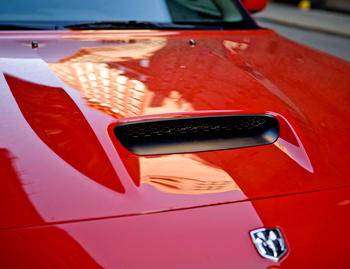 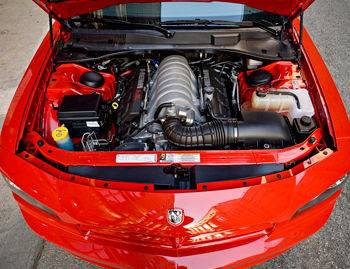 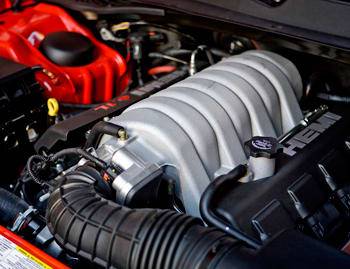 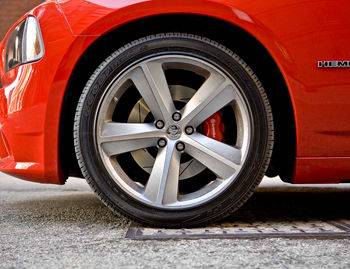 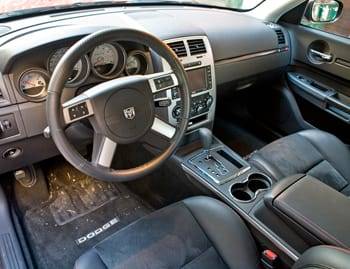 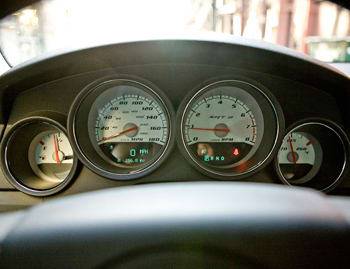 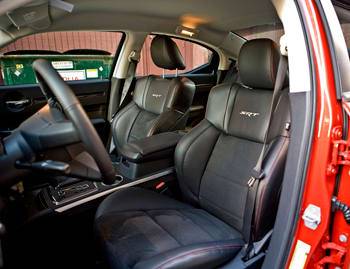 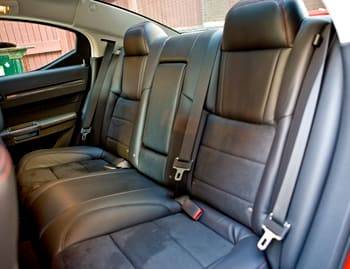 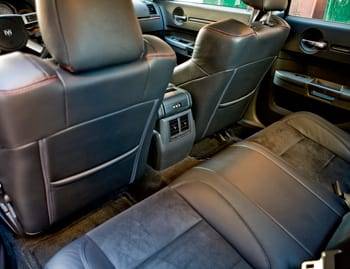 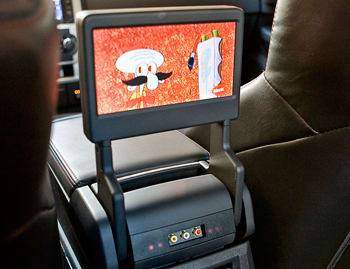 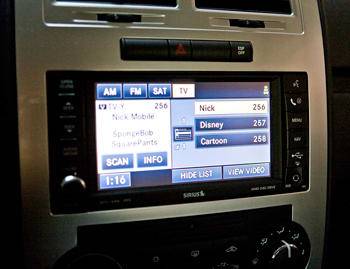 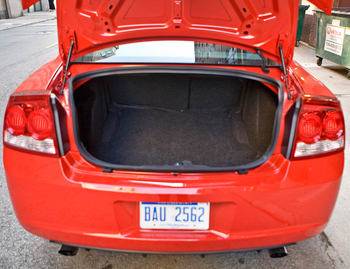 1/17
&quot;Aggressive&quot; aptly describes the Dodge Charger&#39;s exterior styling, and it&#39;s even more so in the SRT8 model (shown), which gets a hood scoop and air ducts in the bumper designed to cool the brakes.

Editor’s note: This review was written in January 2009 about the 2009 Dodge Charger. Little of substance has changed with this year’s model. To see what’s new for 2010, click here, or check out a side-by-side comparison of the two model years.

If you follow NASCAR, you know that the Chevrolet Impalas, Ford Fusions and Toyota Camrys driving in circles at tracks around the country are custom-built racecars designed to look something like the passenger cars you can buy at your local dealership.

The same thing applies to Dodge’s entry in the series, the Charger, but of all the models out there circling the track, it’s most in tune with NASCAR’s way of doing things: It’s a large rear-wheel-drive car that’s available with a Hemi V-8. I tested the high-performance SRT8 trim level of the Charger, and it seems especially well-suited to satisfy NASCAR enthusiasts or anyone else who loves the thrill of a big V-8 engine.

For a quick read on the Charger SXT trim level, click here.

Styling
There’s something about the Charger that makes it look angry. Whether it’s the angled headlights or the big crosshair grille, the Charger has that get-out-of-my-way look. That look is only enhanced in the SRT8 version, which has a hood scoop and a more aggressively styled lower bumper with air inlets to help cool the front brakes. (See a side-by-side comparison with the 2008 model.)

Like the Chrysler 300 (which it shares a platform with), the Charger has short side windows that enhance the car’s low-slung appearance. The Dodge, however, features different sheet metal and is highlighted by a pronounced bulge extending from the rear doors to the rear quarter-panel. The rear of the SRT8 has bright-finished dual exhausts and a small wing that Dodge says aids high-speed stability; it increases downforce through the way in which it directs air passing over the car. The wing, however, blocks rear visibility somewhat.

Going & Stopping
In the Charger SRT8, it’s easy to go from civilized to unruly behavior in a second; all you need to do is jam the gas pedal to make the 6.1-liter V-8 change its tune from a muted burble to an all-out assault on your ears — accompanied, of course, by a burst of power. Do that once and you’ll immediately have respect for the engine’s 425 horsepower and 420 pounds-feet of torque. Whether you’re puttering around at city speeds or moving along at a highway clip, the SRT8 is never at a loss for power, and Dodge says it can run from zero to 60 mph in a little more than 5 seconds. That’s quick for a two-ton sedan.

The big V-8 pairs with a cooperative five-speed automatic transmission that features Dodge’s AutoStick clutchless-manual mode. The automatic makes seamless shifts during leisurely driving, but can knock off a couple of quick, firm downshifts when you step hard on the gas. Tapping the gear selector left or right initiates downshifts or upshifts, and while the response is quicker than what you might find in a model of lesser performance, there’s still too much shift lag.

Another performance feature of the SRT8 is its front and rear Brembo brakes. These performance brakes shed speed quickly at the lightest touch of the brake pedal.

Ride & Handling
The Charger SRT8 has a unique suspension setup that features special shock absorbers and springs, larger stabilizer bars and a half-inch-lower ride height. While the sedan’s ride is fairly firm, the suspension allows quite a bit of suspension travel. This isn’t the case with all performance cars, and it makes for a more comfortable ride than expected — even on older, worn-out roads.

The SRT8 feels most at home on the highway. The car tracks admirably once you’ve chosen your line, and it feels especially stable, too. It’s also rather quiet in the cabin, with only a hint of wind noise. It’s definitely made for cruising.

As you might have guessed, the SRT8 wasn’t made for winding roads. The sport suspension keeps the Charger flat during hard cornering, but this is a big car that has to be muscled around bends in the road. It doesn’t reward the driver in the process, because the steering doesn’t offer much feedback. Also, the position of the rearview mirror and the car’s upright A-pillars impede visibility when you’re driving on curvy roads.

The Inside
Dodge updated the interior for the 2008 model year, with changes including a restyled dashboard and more soft-touch surfaces. Along with the new Ram pickup truck, the Charger has one of Dodge’s better interiors in terms of materials quality, panel fit and refinement of the controls. The brand still has some rather unrefined interiors, like the one in the Caliber, but the Charger does refute the claim that Dodge doesn’t offer any nice cabins.

My impressions, however, may be the result of testing the top-of-the-line SRT8 model, which starts at $38,670 and had an as-tested price of $44,375. Upscale features included standard dual-zone automatic air conditioning and an optional entertainment and navigation system.

The SRT8 has front bucket sport seats with large side bolsters on the bottom cushion and backrest. The seats have power adjustments and are quite comfortable. The rear bench has form-fitting seat cushions in the outboard seats. The large front sport seats intrude on backseat legroom slightly, but adults can still get comfortable back there.

Cargo
The Charger’s trunk offers 16.2 cubic feet, which is similar to what other full-size sedans like the Buick Lucerne (17 cubic feet) and Hyundai Genesis (15.9 cubic feet) offer. If you need room to carry large items, the Charger also has a standard 60/40-split folding backseat, a feature that’s less common in large cars than it is in compact and midsize models.

Safety
The Charger SRT8 has standard antilock brakes and an electronic stability system (they’re a $1,025 option for the base Charger). Side-impact airbags for the front seats and side curtain airbags are grouped together as an option, too.

In the Insurance Institute for Highway Safety’s frontal-offset crash test, the Charger received a Good overall rating, the highest possible score. The Charger was also subjected to the IIHS’ side-impact crash test, and a model without the optional side airbags received a Poor overall rating, the worst possible score. As of publication, side-impact test results weren’t available for Chargers with the optional side airbags.

Charger in the Market
Times are difficult, to say the least, for the Detroit Three, but things are especially rough for Chrysler, whose sales were down 30 percent in 2008; Charger sales fared comparatively better, down 18 percent.

A difficult sales climate for Chrysler, however, means good deals for car buyers as the automaker is offering a variety of discounts like employee pricing, cash rebates and financing deals. The high-powered SRT8 trim level might be harder to find with significant discounts, but if you have confidence in Chrysler’s future, it’s not a bad time to buy a Charger.

Charger SXT Quick Drive
I took a brief spin in an all-wheel-drive Charger SXT. Not surprisingly, this version offers a significantly more relaxed and comfort-oriented driving experience than the SRT8; there’s a hint of floatiness in the suspension when you travel on rough stretches of road, but it’s nice to be a little isolated from that kind of pavement.

The SXT’s 250-hp, 3.5-liter V-6 engine isn’t a fire-breather, but it should offer more than sufficient performance for most driving situations, and it works well with the car’s five-speed automatic transmission.

The Charger steers with a light touch and is easy to maneuver. While that would be fine on most full-size cars, the Charger is supposed to be the performance-oriented sibling to the Chrysler 300, which covers the comfort-oriented buyer’s bases. A little more steering feedback wouldn’t hurt this car one bit. Brake pedal feel, however, is right on the money; it’s very natural and linear.

Backseat passengers enjoy comfortable accommodations thanks to the soft bench seat. While legroom is fine for taller adults, it’s not as plentiful as you might expect for a full-size sedan. The backseat is also a little claustrophobic because your views out the side of the car are limited by the low roofline — which translates into short windows — and by the car’s exterior styling, which cuts off the side window near the passenger’s head. There’s a bit of this sense of being enclosed in the front seats, too — sometimes, when you’re first in line waiting for a stoplight to change, you have to lean down to see the light through the short windshield — but visibility issues overall are more pronounced in the backseat. Back to top