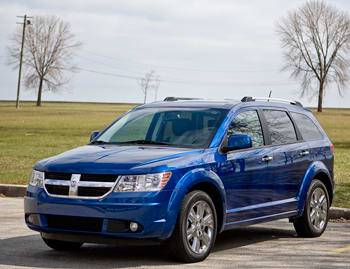 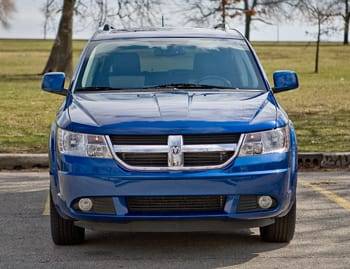 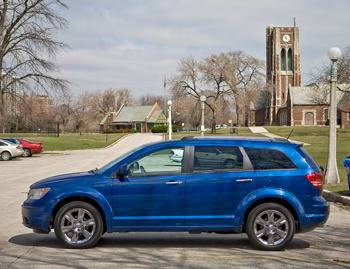 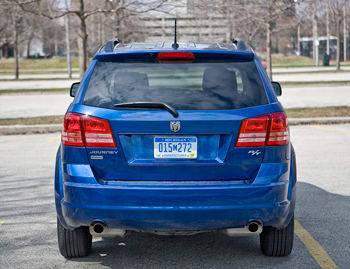 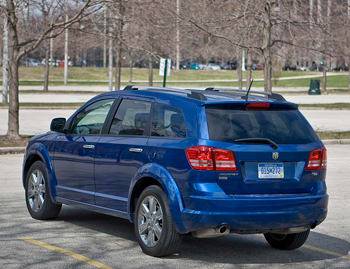 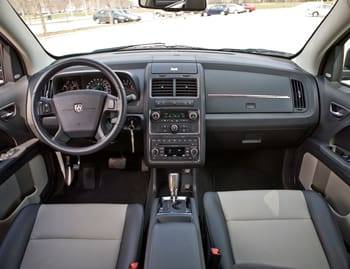 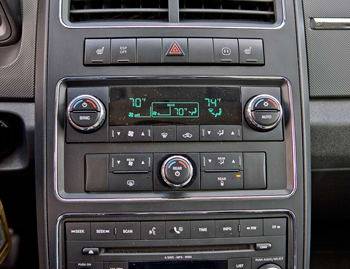 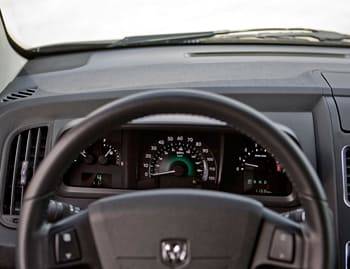 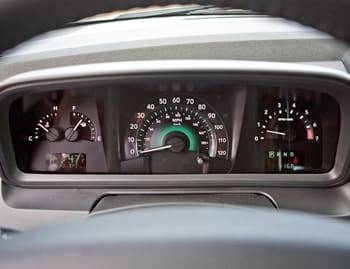 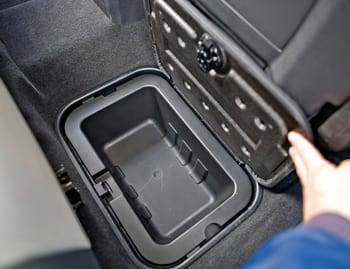 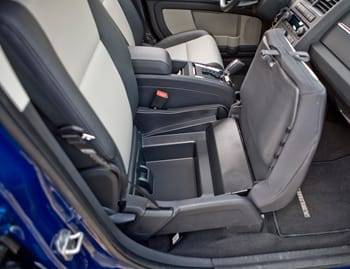 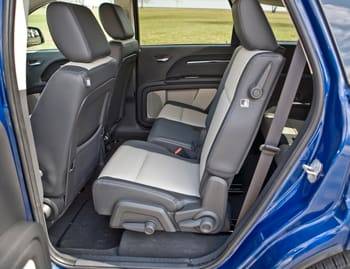 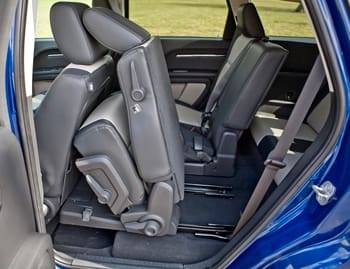 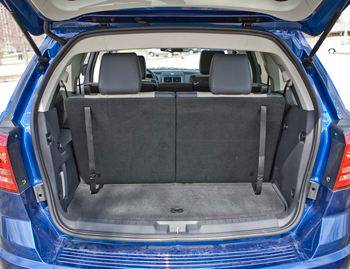 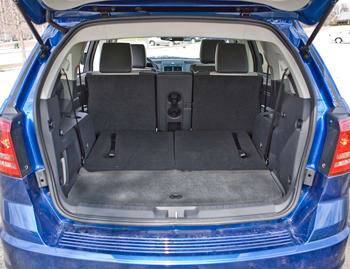 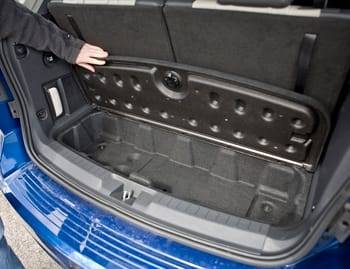 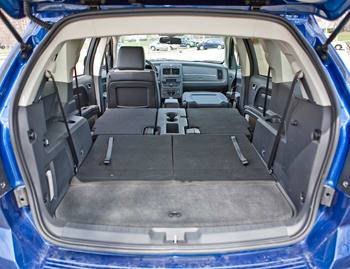 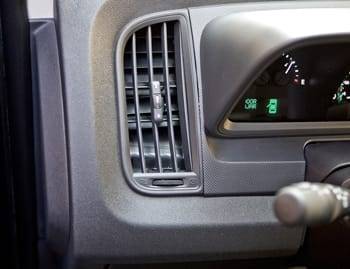 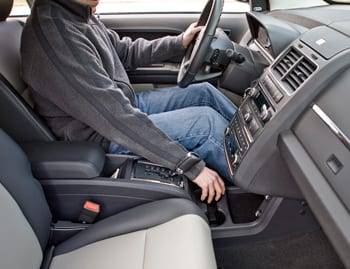 1/19
The Journey has a slightly European look. It could even be called understated when compared with other vehicles in the Dodge lineup.

Editor’s note: This review was written in April 2008 about the 2009 Dodge Journey. Little of substance has changed with this year’s model. To see what’s new for 2010, click here, or check out a side-by-side comparison of the two model years.

Dodge’s 2009 Journey is a bizarre SUV. There’s nothing wrong with it really. It’s large, affordable and comes in an array of trim levels and prices, along with a choice of four- and six-cylinder engines and either front- or all-wheel drive. It can also be equipped with an optional third row of seats.

None of that is the problem. What bothers me is where the Journey fits in the current automotive landscape. When equipped with a V-6 engine and third row, it goes head-to-head with the Toyota Highlander and Honda Pilot, both newly redesigned models with solid fan bases and proven reliability. Take that third row out and it has to fight off the Ford Edge and Hyundai Santa Fe. Stick with the base four-cylinder engine and the Journey’s price still beats competitors — like the Honda CR-V and Nissan Rogue — even though they’re much smaller SUVs.

That’s a lot of ground to cover for one vehicle, and while the Journey can’t win outright in each enemy territory, it proves to be a good value in all of them.

Crossover-ness
The biggest surprise about the Journey is that it’s big. At 192.4 inches, the Journey is longer than the Toyota Highlander, which comes standard with three rows of seats. To get three rows in the Journey you have to move to the mid-level SXT trim, which comes with a V-6 engine, and then add a $995 third-row seating package, bringing the cost to $23,855. The V-6 powered Highlander starts at $27,300.

I’m not saying the Highlander isn’t actually worth the additional $3,500, I’m saying you can get virtually the same utility and a V-6 engine for a much lower price. There really hasn’t been a three-row crossover this big for this little money before.

While I was impressed with the V-6 engine in my AWD R/T tester, I wonder if the base four-cylinder (offered only with front-wheel drive) will be capable enough to haul such a big vehicle. I think many shoppers will gravitate to the sub-$20,000, bargain-basement crossover, and they might get a different driving experience than the one I had.

Looks
Four recent major product launches for Dodge — the Avenger, Nitro, Caliber and Charger — have had a very in-your-face look that has defined the brand, for better or worse. Conventional thinking in the design realm is “love it or hate it” is better than middle of the road. The Journey, however, is plopped squarely in the middle of the road.

That doesn’t mean it’s bad. In fact, I thought the bright blue tester had a masculine stance without attracting too much attention. I’d definitely pick another color for it, but besides that the overall look had a hint of elegance to it. That’s something new for Dodge. A few colleagues called the Journey’s styling “bland,” while one passerby literally stopped me to ask the name of the vehicle because he was so enamored with its look. That rarely happens to me, even when I’m in a flashier luxury sedan or sports car.

Performance
The Journey is based on the Chrysler Sebring and Dodge Avenger platform. Neither one of those cars thrilled me in the performance department. I’m not talking smoky burnouts from stoplights, I’m talking going to the grocery store and dry cleaner. Even when equipped with the same 3.5-liter V-6 in the larger, heavier Journey I tested, those sedans seemed like they were rickety machines of a previous generation, not brand-spanking new. The Journey, however, feels quite solid when accelerating, and I didn’t mind having just 235 horsepower versus the more-powerful engines found in much of the competition.

The six-speed automatic transmission delivers fluid shifts, and a manual mode actually performs precise shifts for drivers inclined to do it themselves. The mileage with either engine is pretty much middle of the pack, so I’d give the Journey a passing grade there. The V-6 gets 16/23 mpg city/highway with FWD and 16/22 mpg with AWD. The four-cylinder, in FWD SE models only, returns 19/25 mpg. If an automaker gives folks relief on the MSRP, it’s less likely to offer any at the pump. Still, if there’s need for improvement, it’s in the mpg number.

Steering was also surprisingly pinpoint and intuitive. A comfortable ride and very little SUV lean also backed up this reassuring feeling behind the wheel. Again, I took a second to remind myself this was a Dodge with a low sticker price.

Then I hit the brakes and a squeal emanated in the vicinity of both fenders. The test car had more miles than most we see (around 7,000), but that’s still too new to have brake issues, and it isn’t the first Chrysler product I’ve tested with the same problem. If it were just a squeak with no resulting performance issue it could be overlooked. However, the pedal feel was mushy, and during bumper-to-bumper traffic, the car actually lurched under abrupt braking.

The Journey is a brand-new vehicle, and car companies have been known to make improvements for the second model year. I hope the engineers at Dodge take some time to improve the braking, because they’ve got one of the best-performing vehicles for its intended task (I’m not talking performance cars here) in a long time.

Seating, Cargo and Utility
Even after a week of trying out the three rows of seats, Latch connectors, cargo-carrying ability and even the under-seat storage up front (check out the photos above), the Journey’s overall dimensions still throw me for a loop. I think if we just file the Journey into its own class of crossover we’ll be better off than trying to compare it to every model it can possibly compete with.

Because I only tested the model equipped with a third row, I can’t speak to the two-row edition. Dodge only lists one set of second-row legroom specifications, so it would seem that whether you get a two- or three-row version, the second row won’t be overwhelmingly roomy for passengers. Even though you can slide the second row forward and back, I found little relief for my knees in the rearmost setting. There was little thigh support, but the seatbacks do recline. However, since I seemed to have plenty of headroom, I’d gladly give up the reclining seat for more leg- and knee room.

Getting into the third row is very easy. The second row folds forward in an accordion style, like some competing models do. The handle can be easily pushed from the side or when sitting in the third row. I find the escape route from the third row vitally important, especially if you’re wedged back there as tightly as in the Journey. Granted, most of the vehicles this size, such as the Pilot and Highlander, don’t allow a lot of room for full-size adults. They’re made more for kids and tweens.

Folding the third row flat is also a simple task, especially when you’re behind the rear bumper. That’s when you’re going to want that additional space quickly — when you’ve got the shopping cart full of groceries and it might roll away if you walk around to the doors.

The second row also folds flat with the flip of a lever on the side of the seat, but that is much heavier to operate. Of course, you probably won’t need it as often, either.

There are some nifty storage compartments sprinkled around the cabin like secret hideaways. These will probably be highlighted with more importance than they’re worth by dealers. They’re neat, but they wouldn’t sway me in my final buying decision. Clearly the most useful of these are the two bins that rest under the floor of the second row. Each looks to be able to hold about a six-pack of beverages — hopefully the non-alcoholic kind. They kind of remind me of those smuggling bins aboard the Millennium Falcon.

Up front, there’s a storage bin under the passenger seat. I have no idea why this is needed, especially since you have to lift the seat cushion up to get to it. Which means, of course, no one can be sitting there when you open it. A lot of cars out there have a sliding drawer under the seat, and that makes more sense. Add to that the fact that having the bin there means there’s no sensor in the passenger seat that alerts the airbag system to deactivate when that seat is empty or there’s a small child present, which is a safety concern too. Not well executed.

Safety
Besides that seeming safety blunder, the Journey comes with all of today’s required and soon-to-be required features, including stability control, front-seat side airbags, side curtain airbags, a tire pressure monitoring system and antilock brakes. Any new SUV or crossover today needs these items to be competitive.

The Journey has not yet been crash tested by the Insurance Institute for Highway Safety.

Dodge Journey in the Market
Even after evaluating all the pros and cons, I’m still unsure how the Journey will perform in the real world of car shoppers. The low starting price will undoubtedly bring folks into dealerships. The large cabin, sizeable cargo room and high-quality controls will certainly impress shoppers. Inoffensive looks won’t turn anyone off. But what will get folks to sign on the dotted line? It’s the economy, stupid; a few thousand dollars is a more convincing argument than any performance indicator. And hey, there might even be an incentive or two out there.

What it boils down to is Dodge has delivered its best vehicle in some time, but if it weren’t for its competitive MSRP, folks might not notice.