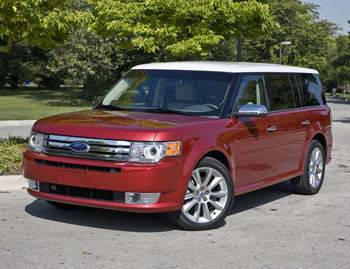 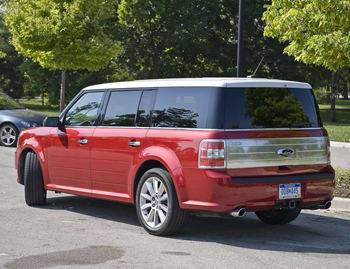 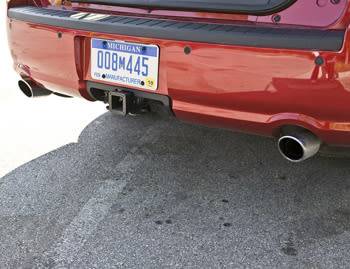 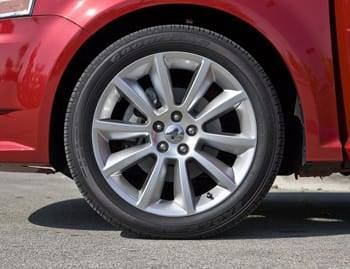 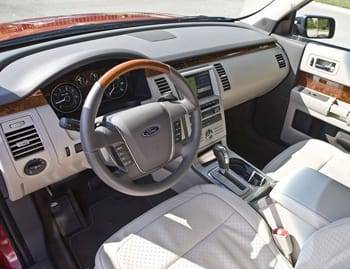 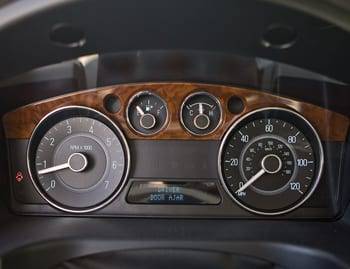 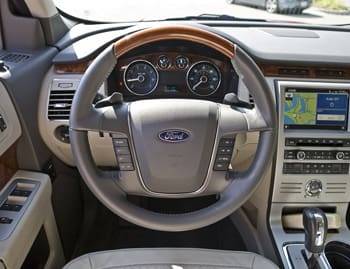 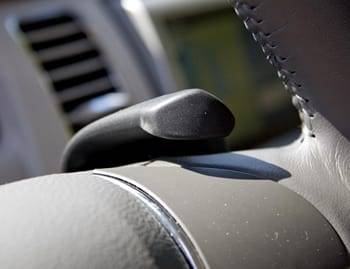 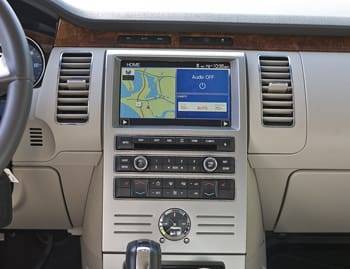 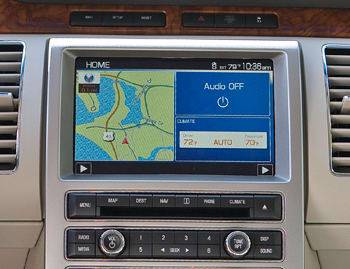 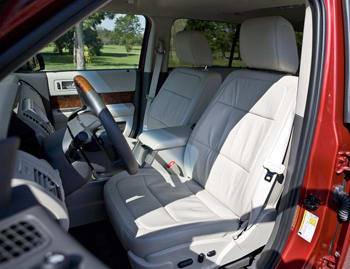 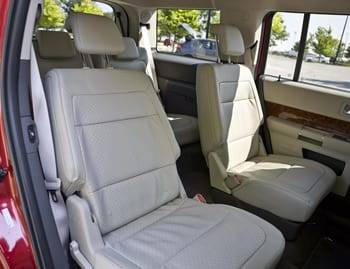 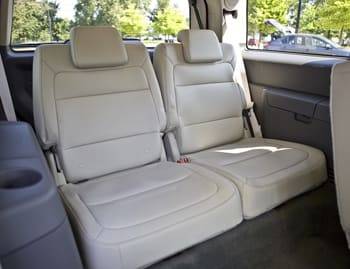 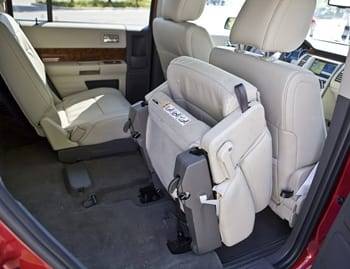 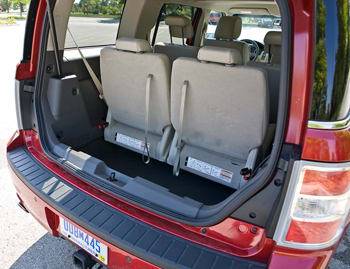 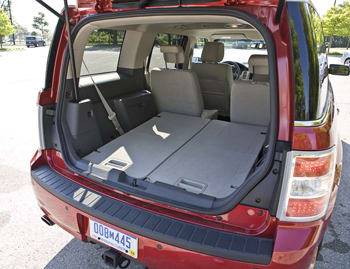 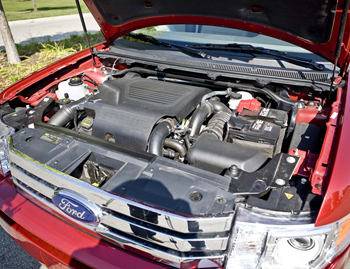 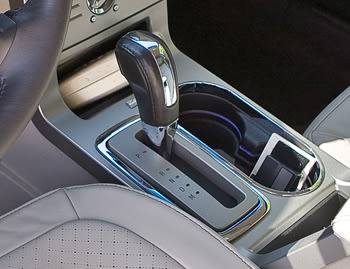 With the addition of a turbocharged engine, the Flex crossover is a rare vehicle: a go-fast people-hauler. The EcoBoost scoots off the line around town and makes quick work of highway passing. The question is, does anyone need this sort of performance from a family car?

Probably not. The non-turbo Flex moves quickly enough, as do most other crossovers. But if you don’t mind paying an additional $3,000 for the EcoBoost engine — there’s no accompanying gas mileage penalty — it certainly can’t hurt. The Flex is far from perfect, but even base versions of the model offer a few compelling reasons to choose it over other three-row crossovers. The EcoBoost Flex adds one more: It’s flat-out quick, and that isn’t something I can say of other school-to-soccer haulers.

Ford introduced the Flex for 2009. The crossover seats six or seven, depending on seating configuration, and it comes in SE, SEL and Limited trim levels. EcoBoost versions have standard all-wheel drive and come in SEL and Limited trims. This review focuses on the Flex EcoBoost Limited. For a top-to-bottom review of the regular Flex, check out our review of the 2009 model here, and see a comparison of them here.

Flexing its Muscles
Though its passing power falls a bit short of a V-6 Toyota Highlander or Chevy Traverse, the Flex’s base 262-horsepower V-6 should prove capable enough for most buyers. The 355-hp EcoBoost is far more than just capable: Even with the added weight of standard all-wheel drive, it handily steams past both competitors. It’s quicker than any other non-luxury crossover I’ve driven lately. Turbo lag, which used to be the bane of most turbocharged cars, is virtually undetectable. Hit the gas, and power comes right away. I recently experienced an EcoBoost engine in the Lincoln MKS, and I’m more impressed with it in the Flex. Perhaps that’s because the MKS faces a number of V-8 competitors, but the Flex doesn’t.

A six-speed automatic transmission is standard. Upshifts come smoothly most of the time, though hard acceleration from a stoplight occasionally led to abrupt shifts that came too early. There’s also some lag in kickdown under hard acceleration, but the drivetrain is capable enough to make do. In a lot of large crossovers, highway passing requires an automatic that shifts quickly and high engine revving. In the Flex EcoBoost, I was able to squeeze off 60-70 mph spurts without the transmission downshifting at all. And that was with four colleagues and their luggage on board.

Unfortunately, extra passing power doesn’t translate to extra towing power. With a maximum towing capacity of 4,500 pounds, the EcoBoost doesn’t tow any more than the base Flex. The Chevrolet Traverse can pull 5,200 pounds.

Comfortable, Not Athletic
The steering wheel turns with light effort at low speeds, but its 40.7-foot turning circle is wide for this class. At higher speeds, the wheel has a nice, weighty feel.

That said, the Flex EcoBoost is no handling champ. There’s plenty of body roll on twisty roads, and the nose dives under hard braking. The standard four-wheel antilock disc brakes suffer from a mushy pedal. As overall handling goes, the Mazda CX-9 feels more planted, but few crossover drivers expect sport-sedan antics. The payoff comes in the Flex’s ride comfort, which is quite good, especially considering our test car’s optional 20-inch wheels. Eighteen- and 19-inch wheels are also available; both have higher-profile tires, which should provide even better comfort.

Road and wind noise are impressively low, given the Flex’s boxy silhouette. On more than one occasion, other editors remarked — at 75 mph — how quiet it was in there.

Cabin Quality, Quantity
Cabin quality is good, but the Flex isn’t Ford’s best effort. Padded materials with attractive finishes line the dash and doors, but they overlap a number of cheaper, grainier plastics from Ford’s not-so-halcyon days of interior quality. (The hellcyon days, if you will.) Things are more consistently high quality in the Taurus and Lincoln MKS sedans, but the Flex is perhaps four-fifths of the way there.

Our 2009 Flex tester had gathered-leather seating inserts that a number of editors called frumpy. This year’s test car had perforated leather that didn’t look nearly as offensive. They’re pretty flat, so you’ll slide around a bit in corners, but after more than a dozen hours on the highway I came away impressed with their cushion support. These seats are comfortable for the long haul, and the first two rows offer plenty of room and adequate thigh support. The third row has decent headroom, but the seats are too low to the floor to provide adult-friendly thigh support.

Cargo room depends on whether the folding seats are up or down: There’s ample space behind the third row, but when both rows are folded, maximum cargo volume — 83.2 cubic feet — trails most competitors. Ford has one trump card, at least: A fold-flat front passenger seat is standard, allowing objects up to 10 feet long to fit inside the Flex.

Safety, Features & Pricing
In Insurance Institute for Highway Safety crash tests, the Flex earned top scores of Good in front, side and rear impacts. The 2009 model is an IIHS Top Safety Pick, and the 2010 Flex should fare no differently. Standard safety features include side curtain airbags for all three rows, antilock brakes and an electronic stability system with Ford’s Roll Stability Control, which attempts to stop a rollover after it’s already started. Other automakers’ stability systems attempt to intuit conditions that may lead to a rollover, but Ford’s remains the only one with a dedicated sensor to detect when a rollover has begun. Click here to see a full list of the Flex’s standard safety features.

The Flex EcoBoost SEL starts at $36,195, which is $2,995 more than a non-EcoBoost all-wheel-drive SEL. Standard features include tri-zone air conditioning, rear parking sensors, heated power front seats and Ford’s iPod-compatible Sync stereo with steering-wheel audio controls. Leather upholstery is optional on the SEL and standard on the Limited ($42,065), which also has xenon headlights, a navigation system and a backup camera. Ford’s Vista Roof, which includes a power moonroof up front and skylights for the second and third rows, is optional. So is a rear-seat DVD entertainment system and Ford’s new self-parking system; we review the latter feature here.

If you’re looking to save money and don’t need all-wheel drive, avoid EcoBoost altogether. The front-drive Flex SE starts at $28,550.

Flex in the Market
The three-row crossover segment is a crowded one, and if you throw in a few not-so-crossoverlike SUVs — like the Ford Explorer and Kia Borrego — the choices amount to a game of Let’s Go Fishin’. EcoBoost makes the Flex an attractive option for SUV shoppers accustomed to V-8 performance, even if they don’t need V-8 capabilities. I suspect a lot of those shoppers will settle for a run-of-the-mill V-6 crossover, but for those who still want yesteryear’s burly performance, Ford has a solution worth looking into.