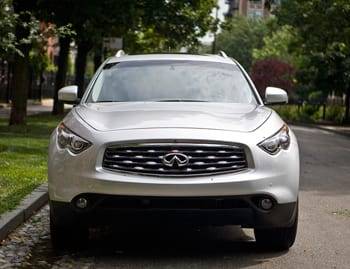 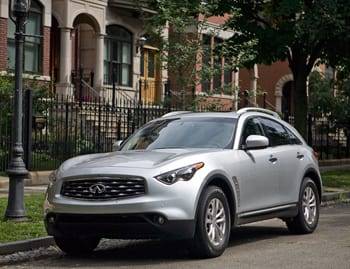 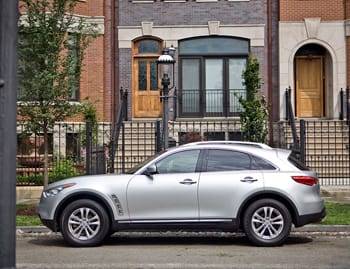 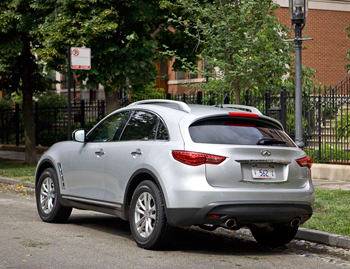 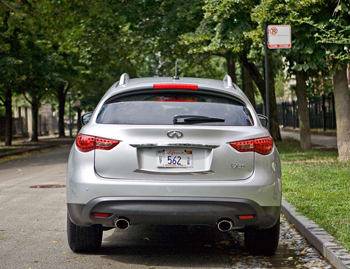 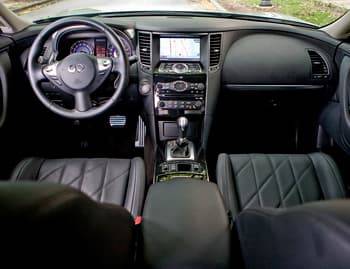 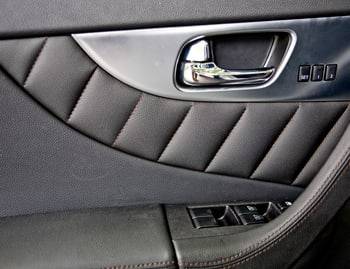 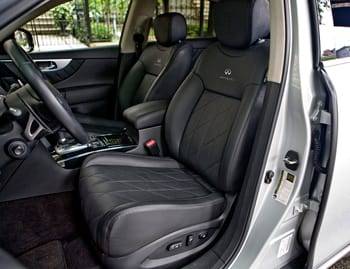 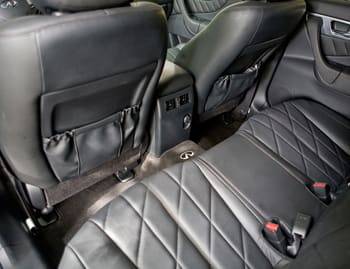 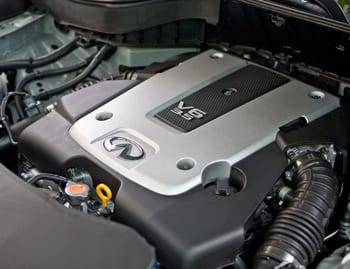 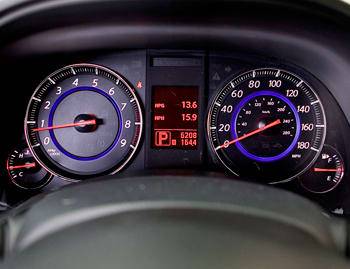 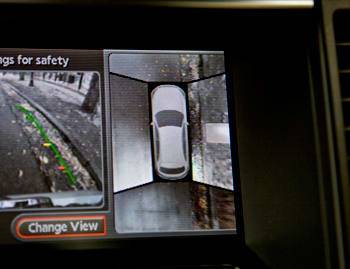 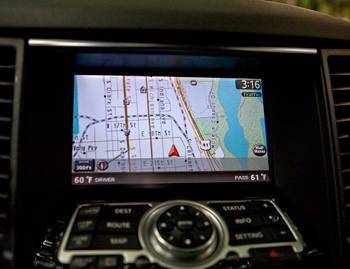 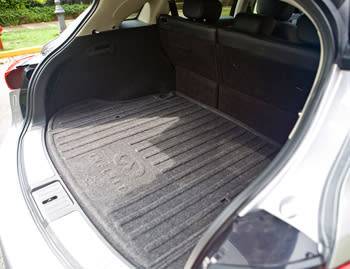 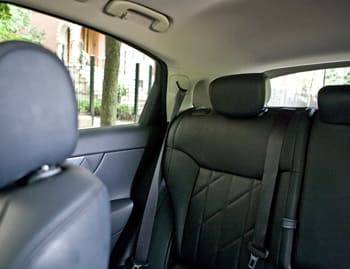 Editor’s note: This review was written in September 2008 about the 2009 Infiniti FX35. Little of substance has changed with this year’s model. To see what’s new for 2010, click here, or check out a side-by-side comparison of the two model years.

Not many people need a sporty luxury SUV like the Infiniti FX. You either want the utility of an SUV or the sportiness of a sedan or coupe — why would you compromise both for an unwieldy hybrid of the two? Maybe looks have more to do with popularity than anything else, though, and the new 2009 Infiniti FX — along with its just-introduced competition, the BMW X6 — offers style to make up for the compromised substance.

I drove both the all-new BMW X6 and the redesigned 2009 FX back-to-back on and around Wisconsin’s Road America raceway and found the X6 the far superior vehicle. After living with both in the real world, though, and spending a full week with the FX35, it’s glaringly apparent that the FX is the real winner when it comes to real-world use — even if it is pricey and doesn’t hold a lot of cargo or give a commanding view of the road. Plus, my dog couldn’t ride in the back because of the sloping roofline.

Oh, and one more thing I learned from my week of testing: I really want an Infiniti FX35.

Looks
Bold is in. Every new car, SUV, crossover, hatchback — you name it — has to be distinctive in terms of exterior styling. Infiniti is certainly buying into that philosophy with the FX. Just look at the pictures and you’ll see that the FX is striking. In person, the bulges on the hood are what really set it apart visually from anything else I’ve driven, both in terms of exterior style and in terms of the view from the driver’s seat.

Most SUV hoods drop down radically, and the seats are positioned so high off the ground you don’t even notice what’s out in front of you. That’s not the case with the FX. Instead, the curvaceous hood’s bulges stick out like two sore thumbs — albeit good-looking sore thumbs — and the seat is slung back like a sports coupe’s. A high beltline leads to a window that starts at shoulder level, adding to a seeming lack of visibility.

Now, you would think all that would make the FX a pain to see out of, but besides the relatively small rear window, I had no problems navigating the beastly SUV around parking lots and merging traffic. After a few days you learn where the corners of the hood are so you can get into tight spots, and the large side-view mirrors help with the traffic issue.

You also give up some cargo area for these hot looks, but I’ll get into that later.

Power & Handling
My test car was the base FX model, the FX35, which means it has a 303-horsepower, 3.5-liter V-6. The FX50 has a V-8 engine that’s, you guessed it, 5.0 liters, producing 390 hp. Costing nearly $14,000 extra, I say keep the V-8’s 87 hp — that’s about $160 per extra horsepower, though you also get more than $5,000 in options standard on the FX50. The FX35 is plenty fast for my SUV needs. I’m not discounting V-8 power, but in this application the V-6 and seven-speed automatic transmission deliver silky-smooth power at the right time, and it just feels good. Why mess with that? Plus, parents out there can buy their kid a Nissan Versa with the savings.

The 3.5-liter V-6 powers many Nissan and Infiniti products and has won awards internationally and praise almost universally in the Cars.com offices.

Also impressive is the handling, which was surprising to me because of the long front end. I thought slinging a crossover around corners in the same manner as a sports car wouldn’t translate to a pleasing driving experience. Yeah, I was wrong about that. In hard cornering, the FX squats down with little of the body roll you associate with SUVs and crossovers. My rear-wheel-drive tester felt well-planted, too. If you don’t live in the Snow Belt, I’d say forego the all-wheel-drive option.

Even with all the sportiness, the ride was mighty comfortable. On one long outing, my wife commented on how quiet it was on a rough highway. That quiet sensation was even more impressive because we were running on 18-inch wheels, which are standard. Optional 20-inch wheels can be had, and 21-inch wheels are standard on the FX50. I presume the ride isn’t as pleasant with either of those options, so be sure to check it out on your test drive.

Compared to the BMW X6 35xi I recently tested, the FX35 felt light on its feet and much more nimble, without giving up any noticeable performance edge. BMW’s trademark heavy steering and huge tires were drawbacks in my real-world testing, where the X6 lumbered along and road noise proved obtrusive. The FX was the polar opposite, gliding along long stretches and just being an overall friendlier daily driver.

Interior
The interior of the FX is right in line with most current Infinitis, like the G and M sedans, but I thought it should have been a bit fancier, like the new EX35 crossover that debuted earlier this year. That smaller crossover has remarkably upscale leather seats, and the upgraded leather thrones in my FX didn’t quite measure up.

It doesn’t even measure up to the sparse yet sophisticated interior of the brutish BMW X6, though the X6 starts about $10,000 more. These interiors are definitely not $10,000 apart.

My test vehicle had an all-black interior with Graphite leather. There are two other leather color choices: a dark brown called Java and a lighter tan called Wheat. I found the dark interior pretty overwhelming, but I’m not sure if the other options would match the personality of the FX like the dark palette did.

Backseat room is much improved in the new FX; there’s more headroom, and with seatbacks that recline it’s now a proper place to put friends and family. My wife always complained about the old FX’s backseat and how cramped it was. After an hour-long trip in the rear seat of the new one, sitting next to a child-safety seat, she thought it was plenty spacious.

My biggest issue with the FX’s interior is the small cargo area, which offers 24.8 cubic feet of space. That may be bigger than the BMW X6’s 20.1 cubic feet, but it’s dwarfed by more conventionally shaped SUVs like the Audi Q7 and its 42.0 cubic feet. What this means in the real world is that while the FX can handle a grocery, Costco and dry-cleaner run just fine, don’t expect to be able to get too many awkwardly shaped boxes or Home Depot purchases in there. Nor the family dog: My 60-pound boxer wouldn’t fit back there, as it was too cramped with the seats up. She ended up riding shotgun.

Obviously not every buyer needs that room, and this is the point where the FX’s style impacts its utility. It’s really just a sedan alternative with some extra cargo room, not a true utility vehicle.

Features
There are some substantial standard features on every FX, including the lowly FX35, but others that often come standard on the competition are packed in an expensive option group. Standard equipment includes a rear spoiler, leather seats, scratch-resistant paint, xenon headlights, heated and power-folding side mirrors, push-button ignition, dual-zone automatic climate control, a moonroof, eight-way power front seats, an 11-speaker Bose audio system, XM Satellite Radio, a rearview camera and cruise control.

There are a dizzying six option packages available for the FX35, two of which are standard on the FX50. I’ll try to detail them as simply as possible.

First, there’s a Premium Package for $2,350 that comes standard on the FX50. It includes heated and cooled front seats, Bluetooth, iPod interface, power-adjustable tilt/telescoping steering wheel, aluminum pedals, quilted leather seats, aluminum roof rails and a cargo cover and net. Besides the cargo cover, which I found useless because the back window is completely tinted, I think all these features are what one would expect in a luxury vehicle these days, and they often come standard on the competition. If you think these features are frivolous, there’s another problem: You have to get this package in order to add the Navigation Package.

The Navigation Package costs another $2,850 and is also standard on the FX50. It includes a navigation system with real-time traffic, a 9GB hard drive for music, a compact flash slot, voice recognition for audio and navigation functions, and Infiniti’s nifty Around View Monitor.

My tester came with both of these packages, and I think it’s fair to say most buyers would opt for both, bringing a $40,950 base price to a more realistic $46,150.

Infiniti’s navigation system is one of the industry’s better applications, with touch-screen, control knob and voice activation. The upgraded sound system from the Premium Package also features an iPod adapter that displays song titles and playlists.

The other packages will probably be less common. They include a Technology Package ($2,900) with a forward collision warning system, lane departure prevention and adaptive cruise control. Having tested these features on the EX35, I can attest that they’re very good safety features, but I’m not sure they warrant the price.

A $3,000 Sport Package is available only on the FX50, and it will be worth it for those who want a more performance-oriented ride, with rear active steering and continuous damping control, which allows drivers to select the type of suspension they want. Heavily bolstered sports seats are also included.

Safety
The FX comes standard with seat-mounted side airbags for the front passengers and side curtain airbags for both rows. Active head restraints are standard for both rows; most of today’s vehicles with active head restraints just have them up front. These devices help prevent whiplash in rear collisions. Like most crossovers, the FX has four-wheel-disc antilock brakes, an electronic stability system, traction control and a tire pressure monitoring system.

At this time, neither the National Highway Traffic Safety Administration nor the Insurance Institute for Highway Safety has fully crash tested the FX. IIHS did complete a frontal crash test of the FX, and it earned the top score of Good.

FX in the Market
Even at a price tag of nearly $50,000 for a well-equipped model, I see the FX competing with both the BMW X6 and any number of midsize luxury sedans on the market. The winning attribute is its in-your-face looks, and no BMW 5 Series, Mercedes-Benz E-Class or even Infiniti M sedan looks as bold.

That’s also what you have to remember when considering the FX. This isn’t a true SUV in terms of cargo capacity. SUV competitors like the BMW X5, Acura MDX and Audi Q7 offer much more room for a similar price.

It’s intriguing that there can be such subtle variations in a segment where every vehicle may appear to be pretty much the same. The FX certainly fills a very small need in that segment, and its look will be what attracts shoppers.