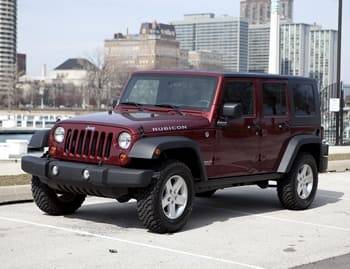 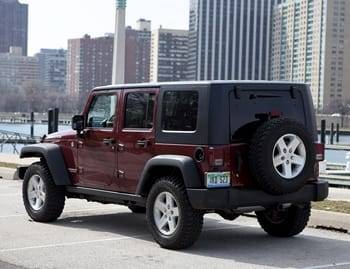 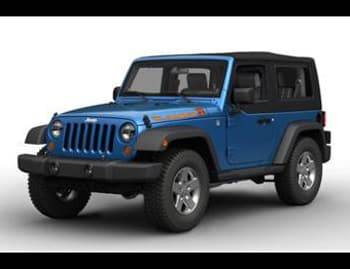 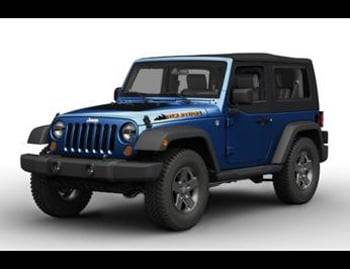 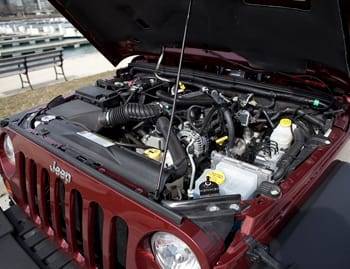 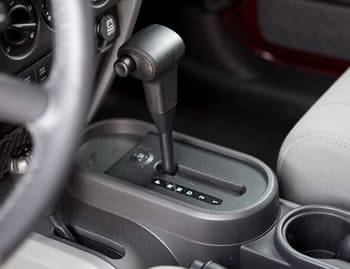 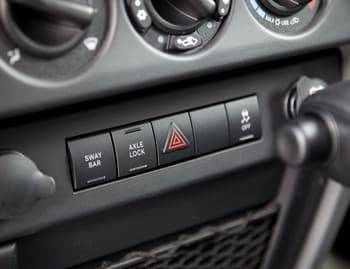 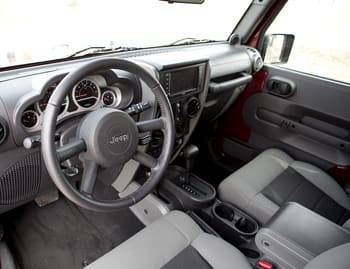 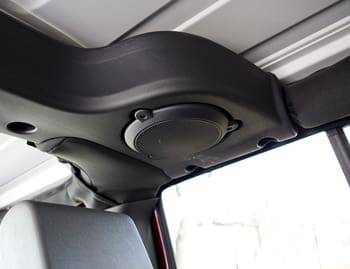 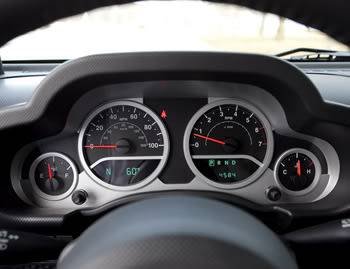 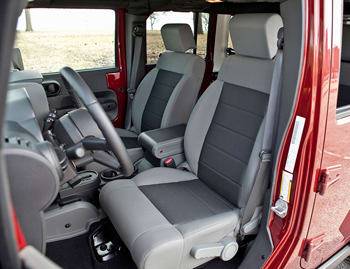 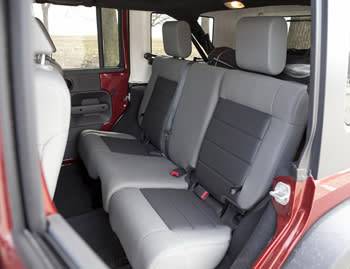 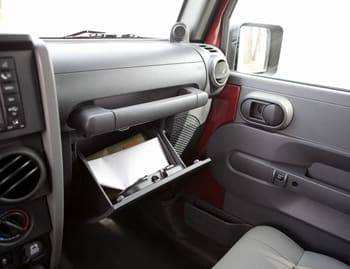 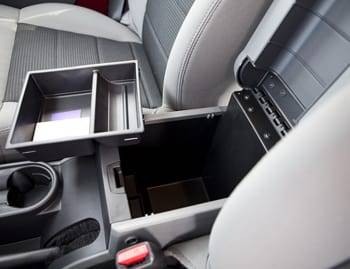 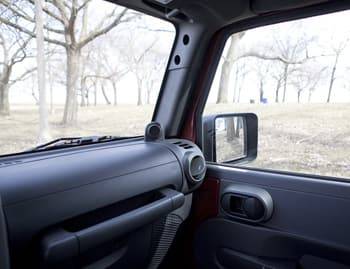 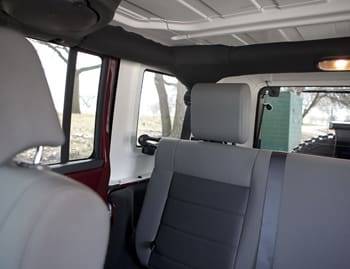 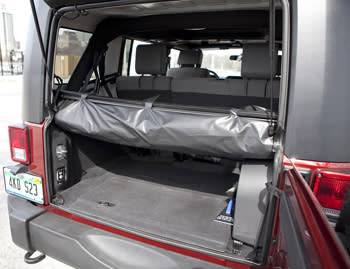 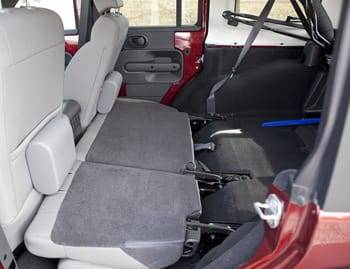 The Wrangler is to Jeep what bananas are to Chiquita, and that’s something Chrysler’s latest owner, Italian automaker Fiat, has said it won’t meddle with. That’s probably a good thing. Short of a few luxury models, no other SUVs can boast the Wrangler’s off-road chops, and not one can match its outdoorsy versatility. But the other shoe always drops — and in this case it’s a steel-toed boot. With a brick in it. Chucked from a ladder.

The Wrangler’s off-road capabilities deserve respect, but they come at a high price once you get back to civilization.

On the Trail
Jeep’s “Trail Rated” badge, which signals a host of off-road capabilities, seems superfluous here. With locking front and rear axles, a disconnecting front stabilizer bar for additional up-and-down wheel travel, a heavy-duty Dana 44 front axle, and a two-speed transfer case with a 4.0:1 low-range gear ratio, the Wrangler Rubicon blazes trails that would leave other SUVs slipping, stalling or just plain stuck. I took a Rubicon on a serious off-road course a few years back, and it clawed through slop I thought impassable. I’ve driven pickups and SUVs that ground to a halt or dug themselves in when traction gave out at all four wheels, but when you lock the axles via a dashboard button in the Rubicon, it sends mud, sand or rocks flying as all four wheels move in unison. And eventually it moves forward.

It’s not just equipment that makes the Wrangler so good on the trail. The SUV’s construction — a spare design with short overhangs and a high ride height — makes for easier maneuverability and better clearance. Consider two competitors:

Hard-core off-roaders will want to get the two-door Rubicon. Though its approach and departure angles are similar to the Unlimited’s, the two-door’s 20.6-inch-shorter wheelbase contributes to a higher, 25.2-degree break-over angle than the Unlimited’s 20.8 degrees.

With either setup, non-Rubicon Wranglers lose the axle lockers and employ 2.72:1 low-range gearing — still respectable — as well as a Dana 30 front axle with a fixed stabilizer bar. They have the same array of underbody skid plates and, depending on the trim, at least 8.7 inches of ground clearance. Even with the Wrangler Sport’s 16-inch wheels and smaller tires, approach and departure angles exceed 37 degrees. Throw in an optional limited-slip rear differential, and I suspect the Sport, Sahara, Islander and Mountain are still capable of some serious off-road shenanigans. (The rear-wheel-drive Sport and Sahara Unlimited, on the other hand, would be able to do little of that.)

On the Road
Automakers are getting better at finding middle ground between the extremes — nimble handling with reasonably good ride comfort, for example. The Wrangler is old-school; it swings unapologetically toward the extreme. The non-independent, solid-axle suspension delivers ride quality reminiscent of trucks in the 1990s. Encounter anything short of glass-smooth interstates, and the Wrangler bounces up and down erratically, barely resettling after one expansion joint before the next one sends it into another tizzy. My Rubicon’s 32-inch BF Goodrich Mud Terrain tires did a decent job masking road noise, but wind noise became intrusive at highway speeds, and any bumps mid-corner sent the Wrangler hopping sideways. With a lighter-duty suspension, other Wranglers likely pack a more controlled ride. If you test-drive the Rubicon back-to-back with one of them, let me know your thoughts.

The Wrangler’s 3.8-liter pushrod V-6 is old-school, seeing duty in some form through two decades of Chrysler products. Here it’s good for 202 horsepower and 237 pounds-feet of torque — enough power for stop-and-go driving and torque-needy off-road maneuvers. But the Wrangler and its truck-based peers are heavy. My four-wheel-drive Rubicon weighed in at 4,340 pounds; that’s a bit more than the four-wheel-drive FJ Cruiser and nearly 800 pounds more than a loaded Ford Escape or Honda CR-V. Highway acceleration is weak, and the engine sounds coarse when pushed.

A six-speed manual is standard. We drove it in a 2007 Wrangler, the first year of the current generation, and its rubbery throws and heavy clutch are typical of the manual transmissions you’ll find in truck-based SUVs. Our 2010 Wrangler had the optional four-speed automatic. It upshifts smoothly but begs for more gears on the open road; 60-to-70 mph acceleration sends the automatic hunting between 3rd and 2nd gears, underpowered in one and bellowing furiously in the other. Non-Rubicon grades have a lower rear axle ratio — 3.21 or 3.73, to the Rubicon’s 4.1. That could make off-the-line acceleration even worse. Still, the proof is in the pudding, and the pudding is … well, slow. Our friends at “MotorWeek” tested a Wrangler Unlimited Sahara back in 2007, and it loafed to 60 mph in just under 11 seconds.

Typical of a truck, the Rubicon’s steering is a soupy mess. The wheel requires constant corrections to stay on course on the highway — something you’ll be doing often, as the Wrangler’s aerodynamics fall easy prey to crosswinds. Find a corner, and the vague steering turn-in and excessive body roll add an unsettling degree of uncertainty, even for an SUV. Steering this slow might befit tricky off-road situations, where you don’t want to do anything too suddenly. On the pavement, however, it’s a bane.

Urban weekenders should note that the Wrangler Unlimited’s 41.2-foot turning circle (with 16-inch wheels) will make alley maneuvers and tight angles especially troublesome. The two-door Wrangler’s 34.9-foot circle is a much better fit.

Four-wheel-disc antilock brakes are standard across the board, but the mushy pedal doesn’t inspire much confidence. Overall stopping power is modest: In “MotorWeek’s” tests, the Wrangler Unlimited required 141 feet to stop from 60 mph. That’s 11 feet longer than it took MotorWeek to stop a three-ton Toyota Sequoia.

Inside & Out
Adventurous drivers will appreciate the Wrangler’s purposeful interior, with straightforward controls and an open, upright design. Cabin materials look ready to withstand dirt and mud, and Jeep says the floor is washable, with removable carpeting and footwell drain plugs. Sahara and Rubicon models have stain-resistant fabric, with two-tone leather optional.

That aside, a lot of things need work. The front seats provide virtually no lateral support, and the driver’s seat has limited rearward adjustment. I slid it all the way back, and my 5-foot, 11-inch frame could have used a couple more inches of legroom. The standard manual height adjustment jacks the seat up on an incline, so eking out the most legroom means keeping the seat low. A telescoping adjustment for the steering wheel might help more drivers orient themselves, but the Wrangler’s wheel only tilts.

Backseat legroom in the Unlimited is tight, and the two-door Wrangler loses another 1.6 inches. Headroom is adequate, and the backseat sits high enough off the ground that adults’ knees won’t be in the air, but most will find the seat cushions are a few inches too short for adequate thigh support. Though you have to flip the seat cushions forward before putting the seatbacks down — a more involved process than most SUVs require — the Unlimited’s resulting cargo area is tall, and its 86.8 cubic feet of maximum cargo volume is some 20 cubic feet more than that of an FJ or Xterra.

Like the FJ, the Wrangler has a rear swing-gate that extends several feet rearward, rather than the traditional upward-extending liftgate. Some may find it easier to open than a tailgate, but it requires more clearance, particularly when parallel parked. The rear window opens independent of the door, but only after moving the tailgate — and its spare tire — out of the way. Equally annoying: With their detachable hinges, the doors lack any detents to stay in place. Leave an open one unattended, and it drifts freely — and can wander into an adjacent car while you’re attending to groceries or a child. I came inches from experiencing this while unloading a few bags. Expletives ensued, of course.

The removable doors augment the Wrangler’s convertible nature, though we don’t recommend driving one that way regularly, as the doors will help protect you in a side impact. Standard equipment includes Jeep’s Sunrider soft-top, which is easier to use this year thanks to a new cable system that eliminates the need to futz with the side rails. A fold-down windshield is also standard, and the CD stereo’s speakers sit up in the roof bars — a location good for blaring tunes at the beach. Jeep’s optional Freedom Top, which our test car had, includes three hard panels that can open up various sections of the roof.

Remaining Issues
Reliability for the current generation has been miserable, and while antilock brakes and an electronic stability system are standard, the Wrangler is one of a handful of 2010 models that still don’t have standard side airbags. (Click here for a full list of standard safety features.) Seat-mounted side airbags are optional, but the vast majority of 2010 Wranglers I found for sale nationally did not have them. The Insurance Institute for Highway Safety hasn’t crash-tested the Wrangler with side airbags; without them, the two-door Wrangler scored Poor for side-impacts. The Wrangler Unlimited did only slightly better, scoring Marginal. Both models have IIHS’ top score, Good, in front crash tests and Marginal in rear impacts. IIHS has not conducted its latest roof-strength tests on the Wrangler.

Pricing starts at $21,165 for a four-wheel-drive, two-door Wrangler Sport. Unlimited Sport models run $23,410 if you’re willing to have rear-wheel drive, or $24,585 with four-wheel drive. Standard features include the Freedom Top, removable doors, a fold-down windshield and a CD stereo. An automatic transmission runs $825; it’s standard on rear-wheel-drive Unlimited models. Side airbags are $490. Depending on trim, you can get half-doors with plastic windows, air conditioning, power windows and locks, remote keyless entry, cruise control and a navigation system. Check a few boxes, and it’s not hard to move the $28,775 two-door Rubicon past 30 large; check ’em all, and it can creep near $40,000.

Wrangler in the Market
The Wrangler is Jeep’s best-selling vehicle this year, but sales are plummeting. I suspect that’s because more than two years of recession have produced a more practical car buyer who doesn’t need something with capabilities he’ll never use. That shift — long responsible for the demise of truck-based SUVs — may have finally affected Jeep’s original hit.

Reality bites, and the Wrangler’s once-broad weekend appeal — taking the top down, cranking some tunes and forgetting about tomorrow — faces some serious Monday-morning limitations. Off-road enthusiasts love their Wranglers, and for the diehards, this Jeep is a worthy product. I just wonder if anyone else should really consider it.