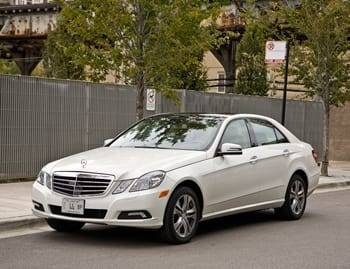 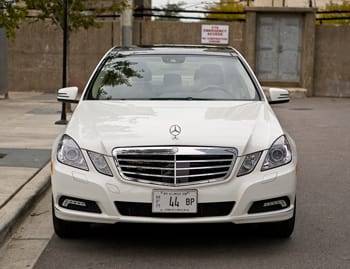 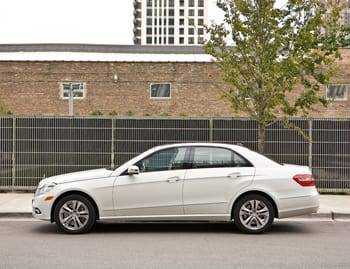 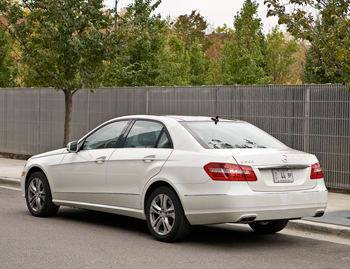 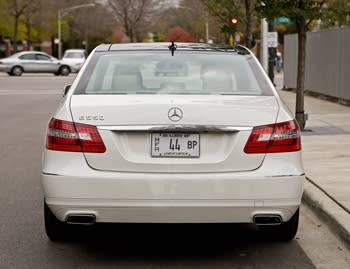 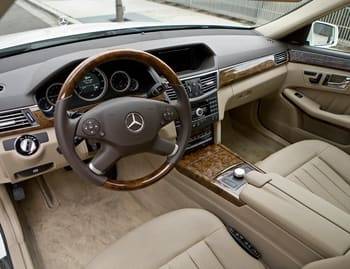 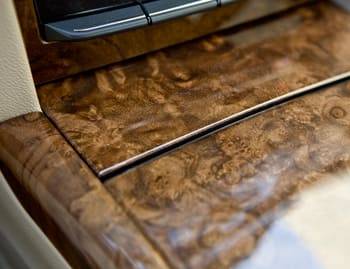 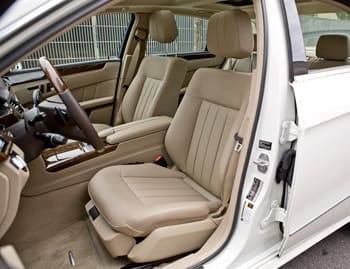 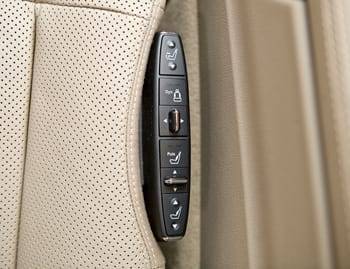 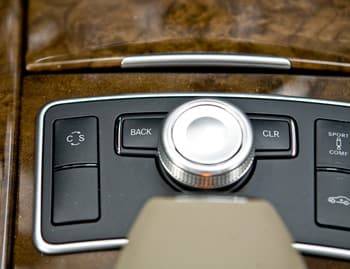 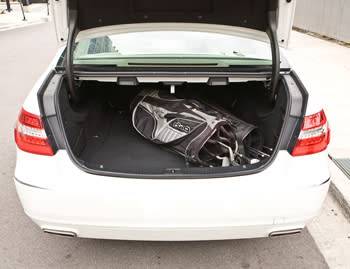 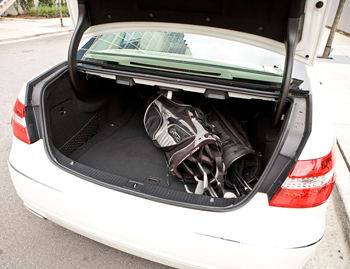 Some people think a German luxury sedan should be fast, handle harshly and just generally be a big race car. I don’t. I think a German luxury sedan should make you feel bad for not dressing up to drive it; you should want to wear a tie when you’re behind the wheel. It should not only be comfortable, it should be composed. For me, driving a car like this isn’t about screaming through the countryside like an idiot, it’s about driving down the road comfortably in a car that’s ready for any conditions that come your way.

With this as the benchmark, the Mercedes E-Class succeeds.

I tested the all-wheel-drive E350 4Matic during an icy, dark and dreary Chicago week. It performed very well in these conditions, including a variety of short city trips and a long, backcountry drive to some ski trails. It had its share of quirks — notably some odd steering personality, as well as some lag in acceleration — but overall I think it’s one of the better luxury vehicles I’ve driven.

Exterior
The E-Class was redesigned for 2010, and I’m not a huge fan of the new look. It trades the rounded edges and quad headlights I liked from the previous model for a more angular, sharper look. It blends in with the crowd so well that I think if you took off the Mercedes-Benz badges, you’d have a hard time telling exactly what brand of car it was. That wasn’t the case with the previous version of the E-Class — it practically screamed “Mercedes-Benz.”

That’s not to say it’s an ugly car now — it’s not — it’s just traded its identity. Don’t believe me? Check out this comparison of the 2009 and 2010 Mercedes-Benz E-Class here.

Interior
The inside got an immediate thumbs-up from me. Our test car came with black ash wood trim, which looks a million times better than any brown wood trim. The car featured in the pictures to the right are of an E550 we had in the office earlier, and the more I look at them, the more convinced I am that the darker trim is the way to go.

The beige leather was also nice, and not only for its color. It felt just a bit stiff — like a baseball glove that’s not quite broken in: soft, but not smooshy — simply perfect. The seats also adjusted about every way imaginable. Our tester came with an optional two-stage massage system that I really liked; it works your entire spine, rather than just lamely inflating one section of the lumbar support. Note: On its most intense setting, the massage is firm, so — well, you’ve been warned.

One odd thing was the placement of the analog clock in the gauge cluster, just to the left of the speedometer. That’s normally where I expect to see a tachometer, but I eventually got used to it.

Driving
My biggest issue was with the E350’s stiff accelerator pedal. I did most of my driving on icy roads, and that’s not where you want to be abrupt with the gas pedal. Thing is, the pedal was so stiff it was hard to fine-tune just how much acceleration you wanted.

Also, the acceleration was OK, but it’s a weaker point in the E350 4Matic than in, say, the more powerful E550. Put another way, the E350 is capable, even with the heavy 4Matic hardware, but the E550 is quick. You notice it most when charging up on-ramps or passing on the highway, but even around town the V-6 feels short on low-end oomph compared with the V-8.

Another shortcoming: The steering is heavy at low speeds, then lightens up quickly. It’s as if it feels like it doesn’t want to turn, then it wants to turn too much. Some other variable-ratio power-steering systems — and some all-wheel-drive vehicles I’ve driven — do this, and I don’t like it. It makes the steering vague, and I don’t think it inspires confidence in parking maneuvers. The system is actually quite good on the highway, and I’m not sure why it can’t be as good in parking lots as it is there.

The high point of driving the E350 is its ride. Mercedes has come up with a suspension that offers a comfortable ride over rough pavement — even with our E350’s Sport Package, which adds 18-inch wheels — yet still manages to feel firm when you go through turns. Other reviewers who’ve driven both the E350 and the E550 say the E550 is even better in this regard. I’d be hard-pressed to imagine how, given the excellent quality of the E350’s ride.

Finally, the cabin is quiet — no wind noise, and just enough sound from the engine that you don’t feel isolated.

Features
Aside from dressing up to drive them, I like how German luxury cars have a plethora of options and toys to play with. Our E350 was no exception, starting with the upgraded Harman Kardon stereo. I tested it with some classical music off my iPod, because classical music asks a stereo to deal with the widest variety of soft, gentle melodies and strong, booming notes. It performed well.

I was also a fan of using Mercedes’ Comand system to control my iPod. I’d heard horror stories that these systems can be hard to use, but it was as easy as falling off a log.

The other thing I noticed immediately — and liked — was the optional panoramic sunroof that covers both rows of seats. It was very important for me — but then, I work in an area of my office building that’s so devoid of light I feel like I’m in a submarine. That’s parked inside a cave. At midnight.

Another nice touch was the standard ambient lighting in the cabin. It shines on cupholders, door panels and various other parts of the cabin. It’s soft enough that I don’t think it would bother people who prefer a perfectly dark cabin when they drive at night. I drove on a pitch-black night down country lanes and found the amount of light to be fine. It dresses up the cabin and shows off the premium materials with a soft, golden glow. A lot of cars these days have some form of ambient lighting — and many change color or have some other whiz-bang feature — but the subtle glow of this system is exactly what you’d expect in a refined luxury car.

We also had a blind spot assist that lit up a section of the side mirrors and set off an alarm if you tried to move into a lane when a car was already there. This helped on the driver’s side mirror, but I didn’t need it for the passenger side, probably because of how I had my mirrors set. But a word about those mirrors: They have a chopped, angular shape that looks great, but I don’t think they show as much of the road as they should. I’m not sure I’d feel confident driving the E-Class without some form of blind spot help. They also don’t fold completely in, leaving you more exposed to sideswipes when you’re parked in urban areas.

Safety, Reliability & Mileage
Because the E-Class has been redesigned, we don’t yet have predicted reliability ratings for this model. Furthermore, the 2010 E-Class hasn’t yet been crash-tested by our preferred source, the Insurance Institute for Highway Safety. All-wheel-drive models are estimated to get 17/24 mpg city/highway — slightly less than models without all-wheel drive.

Standard safety features for the E350 4Matic include antilock brakes, an electronic stability system, side-impact airbags, and side curtain airbags that cover both rows of seats. As mentioned, our test model also came with a few optional safety features, including Blind-Spot Assist, Lane-Keeping Assist, Attention Assist, and an adaptive cruise control system called Distronic Plus with Pre-Safe Brake, which can apply the brakes to slow the car all the way to a stop if needed. Click here to see a full list of safety features.

About the Distronic/Pre-Safe system: It works. In one of my highway drives, someone decided to exit the highway by cutting across three lanes of traffic in front of me and several other cars. I saw what was happening in time to have my foot on the brake pedal, and I’d like to say I was so quick I was able to properly apply the brakes — but the system was quicker. Let’s hope I never get to test the airbags.

E350 In the Market
As I’ve said, the E350 is among the finest luxury cars I’ve driven. Loaded with all the options, it stickers for $51,100 so it better be. Still, I don’t mind paying for quality, and if something is among the very best, that’s what you have to pay.

Where I think things get interesting is deciding whether you spring for the E350 or the E550. If you go the E350 route, you’ll save some money and get a very nice car that’s acceptably quick. Or you could dig deeper into your wallet for the E550 and get all that comfort along with exceptional performance. Some may take a look at the Mercedes’ price, compare it to an American or Asian luxury car and say, “Whoa, now, why not go for a cheaper Lexus (or Lincoln, or Cadillac)?” To me, those cars are just fundamentally different from the Mercedes, BMWs and Audis of the world. Those non-German cars have fine qualities — all have excellent interiors, for instance — but to me, the German cars feel heavier (in a good way) and more secure, and I find the ride more to my liking. The E350 is no exception. If I had the money, it’s what I’d go for.