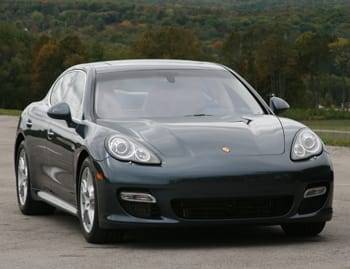 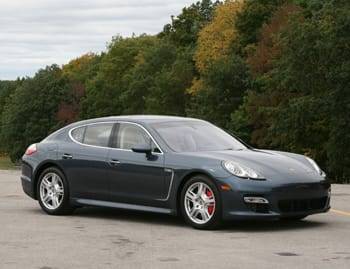 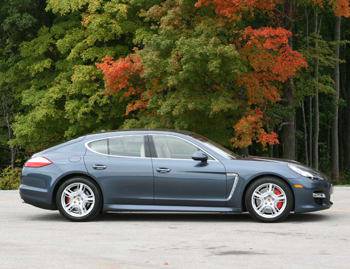 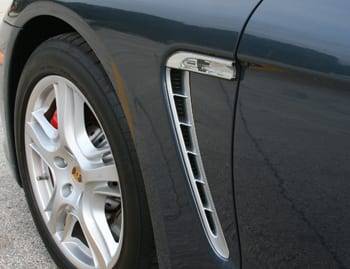 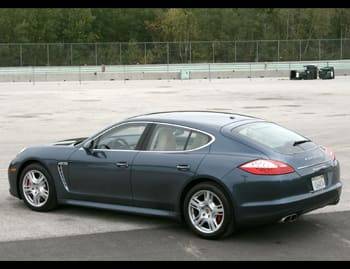 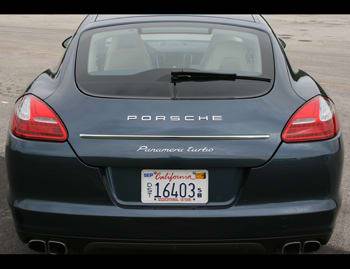 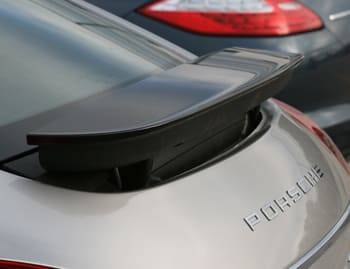 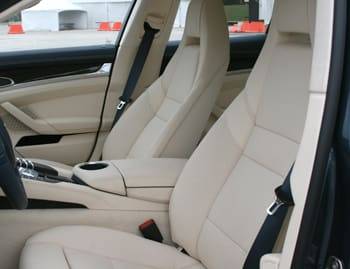 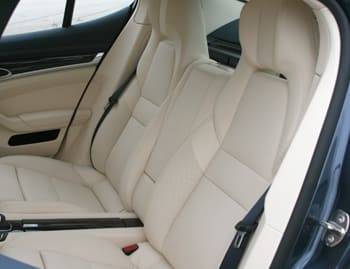 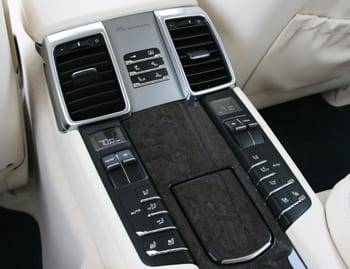 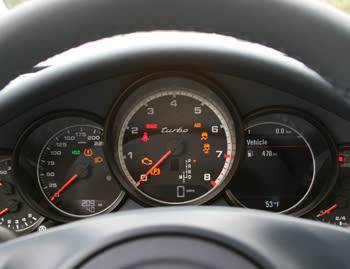 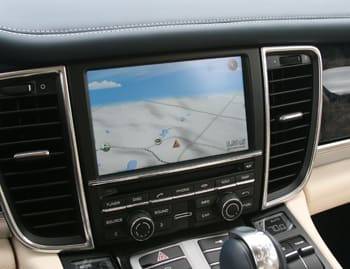 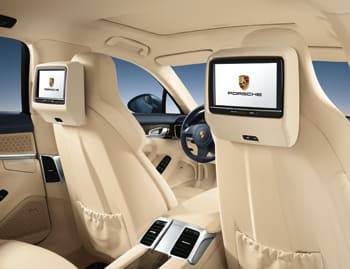 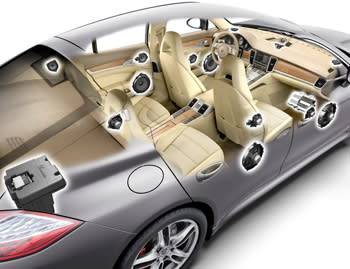 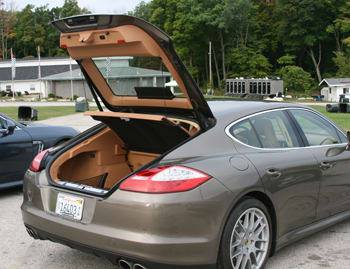 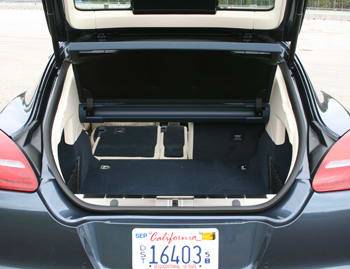 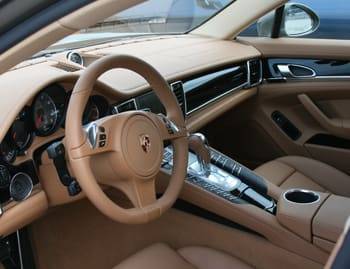 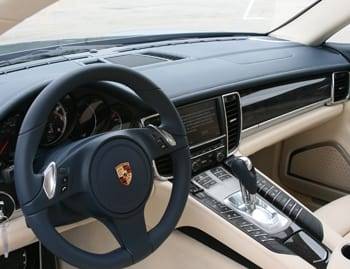 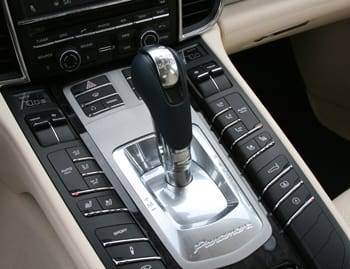 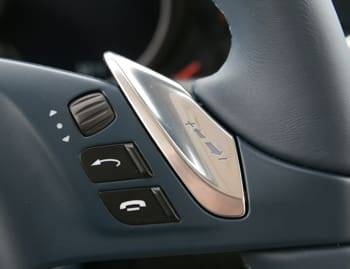 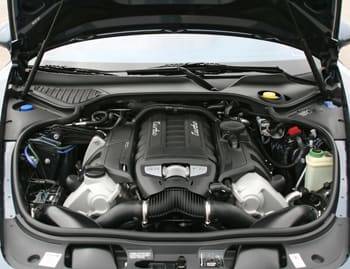 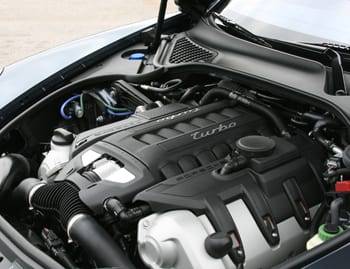 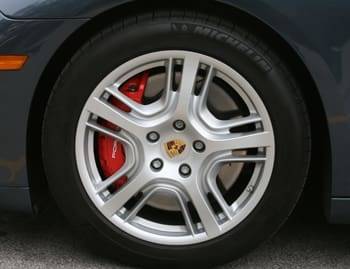 Change isn’t always received well, and the new Panamera four-door hatchback risks being seen as a travesty similar to New Coke by Porsche loyalists — much like the Cayenne SUV was when it hit the U.S. market as a 2003 model.

Before anyone makes any rash decisions — like picketing your local Porsche dealership — let me say this: Porsche didn’t stop making true sports cars with the launch of the Cayenne, and I doubt it will with the debut of the Panamera. In fact, the Panamera offers much of the Porsche sports-car experience to buyers who want room for four.

I had a chance to drive the Panamera on the four-mile racetrack at Road America in Elkhart Lake, Wis., as well as on surrounding public roads. I came away impressed with the sports-car soul Porsche has instilled in this four-door, though I’m not sold on its unique styling and I’m underwhelmed by its backseat.

The Look
The Panamera is one of those cars you need to see in person to get a good impression — particularly its hatchback rear end. It’s unmistakably a Porsche, and that was part of the intent with the design, according to project manager Stefan Utsch. From some angles, the Panamera resembles the classic 911 sports car — a design that’s gained a level of respect over the decades.

A new car like the Panamera doesn’t have the luxury of time to win over buyers, though, and luxury hatchbacks haven’t been particularly well-received by Americans in the past. We’ll find out soon enough whether times have changed enough that U.S. luxury-car buyers will be willing to embrace a four-door hatchback. Send me a note to let me know what you think of the Panamera’s styling.

Going & Stopping
Two flavors of V-8 power are offered in the Panamera. There’s the fast 400-horsepower S and 4S (all-wheel-drive) models with a top speed of 175 mph, according to Porsche, and the even faster 500-hp all-wheel-drive Turbo, which can hit 188 mph. Both V-8s have displacements of 4.8 liters and team with Porsche’s seven-speed dual-clutch automatic transmission.

The focal point of Porsche’s U.S. introduction of the Panamera was Road America, which mixes technical turns with long straightaways over its four-mile length. The straights can make quick street cars feel average, and that was the case with the Panamera S. While the Turbo’s rush of power held me back in my seat when accelerating on the track, the S didn’t barrel forward with as much authority. However, take the S on public roads at speeds most people are likely to encounter, and it feels plenty quick, with a forcefulness that wasn’t there at track speeds. I’d compare its power to Audi’s S8 full-size sedan, which is an enthusiast-oriented version of the German automaker’s A8.

It just goes to show how quickly impressions can change based on the driving situation. Porsche cites zero-to-60-mph acceleration times of 5.2 seconds for the S, 4.8 seconds for the 4S and 4 seconds for the Turbo, though the optional Sports Chrono Package lowers all those figures by 0.2 seconds thanks to its launch-control feature.

Though the Panamera offers impressive acceleration, it’s nevertheless one of the more fuel-efficient cars in its class. The S and 4S get an EPA-estimated 16/24 mpg city/highway, while the Turbo is rated at 15/23 mpg. Plus, there’s no gas-guzzler tax on top of the nearly $90,000 starting price, so you can put the money saved toward a few pairs of driving loafers.

The car also includes an engine auto-stop feature that automatically shuts the V-8 off when the car comes to a stop, then seamlessly starts it when you need to accelerate. Its operation is quiet, unobtrusive and doesn’t affect the operation of vehicle accessories. Porsche says the feature results in a 0.4-mpg fuel economy improvement, but it isn’t factored into the EPA figures because it has to be activated once the car is running.

U.S.-bound Panameras are only offered with the double-clutch automatic transmission, though a six-speed manual is available in Europe. You can leave the transmission in its fully automatic mode and let it make smooth shifts, but one of its real advantages over a conventional automatic transmission is its ability to knock off quick gear changes when you use its clutchless-manual mode. Plenty of traditional automatics include clutchless-manual modes, but they’re often uninspiring because there’s usually a delay between asking for a shift — by pressing a paddle or nudging the gear selector — and having it occur. Thanks to the design of Porsche’s double-clutch transmission, shifts happen with an immediacy that makes the feature more worthwhile than most.

One area where the Panamera differs from your traditional Porsche sports car is its brake pedal, which feels much softer than the firm pedal of the automaker’s entry-level Cayman sports car. In the Panamera, it takes a lot more pedal travel to initiate hard braking, but it’s still quite easy to control braking force.

Ride & Handling
Porsche says the Panamera is designed to compete with full-size luxury sedans like the BMW 7 Series, Mercedes-Benz S-Class and Audi A8. From a price standpoint it may, but the Panamera definitely takes a different tack than those models. Where the S-Class, A8 and even the 7 Series are focused on comfort first and performance second, the Panamera’s emphasis is on performance.

It comes through in various ways, one of which is ride quality. In the S, it’s tolerable on roads with some cracked pavement, but the ride won’t be mistaken for the serene experience that an S-Class or 7 Series offers. The optional Sports Chrono Package includes a Sport Plus setting. In practice, Sport Plus lets the engine rev higher, makes the gas pedal feel more responsive and firms up the ride a bit, but not to the point where it’s unbearable. On the whole, the Panamera is a car that’s easy to drive quickly.

The Panamera has less steering feel than a Cayman, but it’s probably fine for its market segment. Cornering precision is good, and the car reacts quickly to steering inputs, but there’s plenty of power assistance at low speeds and the setup doesn’t communicate the road surface to the driver.

Not that the Panamera isn’t an entertaining car to drive, because it is for a car its size. On the track, I liked the handling of the rear-wheel-drive S more than that of the all-wheel-drive 4S and Turbo; the nose of the S felt lighter and more responsive. If you use the 911 to represent the epitome of the Porsche experience, the Panamera S is probably a 6 or 7 out of 10 due to the lower level of driver involvement when it comes to braking and steering.

The Inside
The Panamera’s interior is purposeful: From the raft of buttons on its wide center console to its form-fitting bucket seats, when you sit in the Panamera you immediately get the feeling that it’s designed for performance driving. That’s yet another thing that separates it from the S-Class and others, which are more concerned with comfortable surroundings.

Porsche says the Panamera puts a greater emphasis on luxury than its other models do, and it shows. The cabin utilizes lots of real stitching and galvanized steel trim, and it can be fitted with carbon fiber, aluminum or real wood. Full-leather and two-tone interiors are optional.

Front-seat cushioning is firm and supportive. Heated, leather, eight-way power seats are standard, and additional adjustments like side-bolster width and seat-cushion length are optional. Contributing to the driver’s good forward visibility is the low dashboard, which is out of the sight line.

Porsche’s tagline for the Panamera is “Four, uncompromised.” People who ride in the backseat, however, will have to make some compromises if you compare the car, as Porsche does, to the 7 Series, S-Class and A8.

Rear headroom and legroom are both good for taller adult passengers, but one of my main knocks against the backseat is the low position of the seat cushion, which makes you sit with your knees up. An optional power-adjustable backseat lets you adjust the length of the seat cushion — just like the available front seats — for additional thigh support, but because your thighs are elevated it doesn’t help much. The backrest angle is relatively upright, too. Whereas riding in the back of an S-Class could make you fall asleep, the backseat of the Panamera is designed to keep passengers engaged in the drive as much as possible.

Cargo
The Panamera’s cargo area measures 15.7 cubic feet (15.2 in the Turbo), which is similar in size to the trunks offered by the S-Class (16.3), 7 Series (14) and A8 (14.6). However, the Panamera’s hatchback design affords it more versatility compared with those sedans. The power-operated liftgate opens high and out of the way, and with the 40/20/40-split backseat folded down, there’s 44.6 cubic feet of cargo space (44.1 for the Turbo).

Safety
The Panamera has standard knee and side-impact airbags for the front seats, side curtain airbags and rear-seat side-impact airbags. All-disc antilock brakes and an electronic stability system are also standard. For more safety feature information, check out the Standard Equipment & Specs page.

Panamera in the Market
The Panamera enters an entirely different segment than the Cayenne SUV did, but its purpose is much the same: “The Panamera’s going to bring new people into the brand,” said David Pryor, vice president of marketing for Porsche Cars North America. The Cayenne has certainly been successful in this regard, becoming Porsche’s best-selling model in the U.S.

Porsche’s goal of selling 4,000-6,000 Panameras here seems doable, even in these tough economic times. For the performance-minded driver, the Panamera is an irresistible alternative to the established sedans in the ultraluxury segment. Badges mean a lot in this class, and Porsche’s allure positions the Panamera quite well on that front.