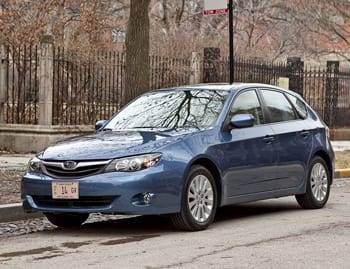 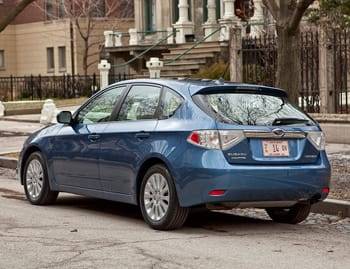 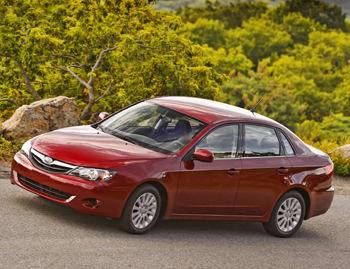 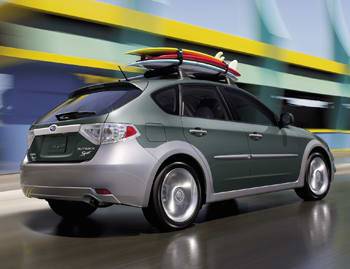 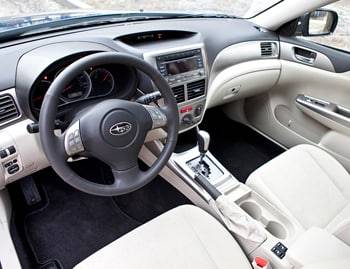 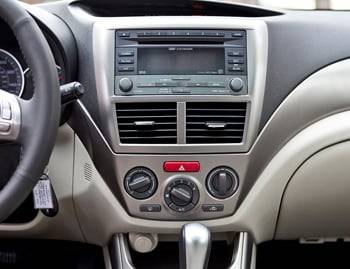 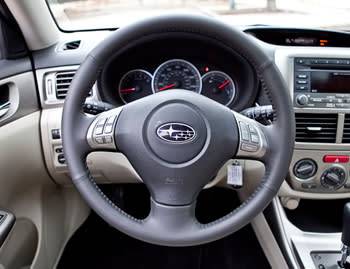 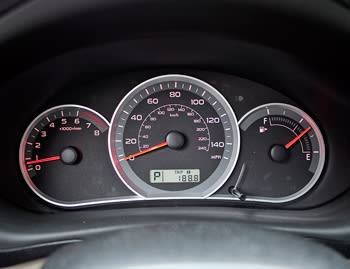 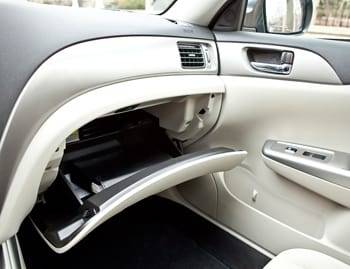 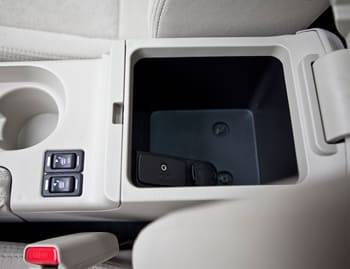 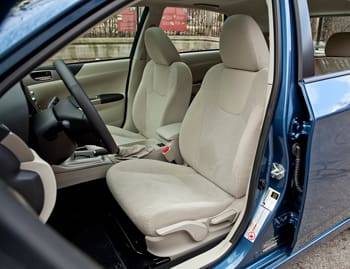 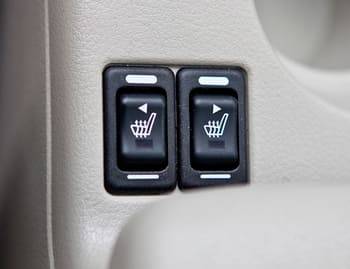 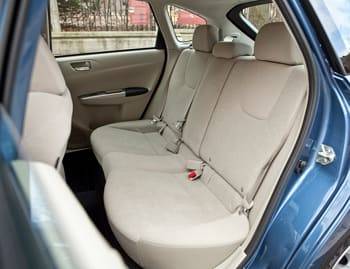 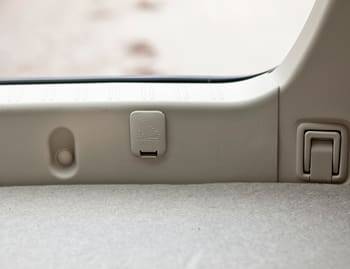 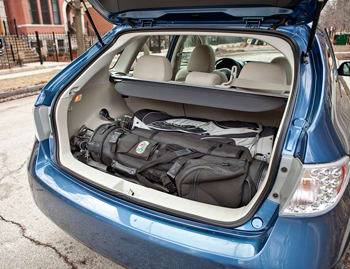 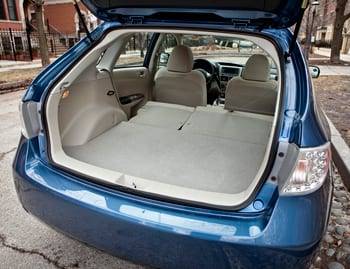 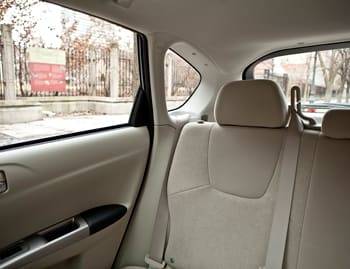 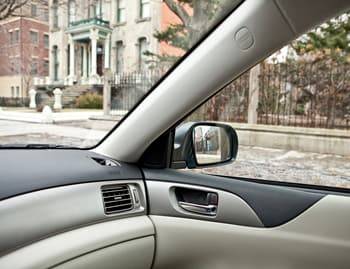 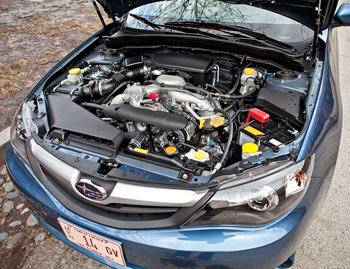 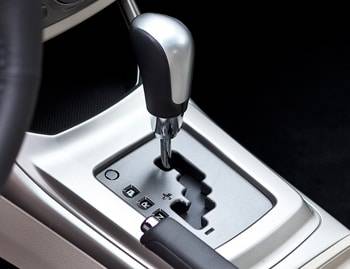 In its most basic form, Subaru’s compact Impreza upholds the most rudimentary tenets of A-to-B transportation: capability, comfort and utility. Its cabin feels thoroughly basic, and a few must-have features are missing, but I suspect that months or even years after buying one, the car’s workhorse qualities will make many drivers glad they chose it.

With two body styles, four engines and multiple trim levels, there are more than a dozen Impreza variants. All come with standard all-wheel drive. Stack them up here, or compare the 2010 and 2009 Impreza here. I drove an Impreza 2.5i Premium hatchback with an automatic transmission.

Familiar Shape
The Impreza has a a clean — if forgettable — design, and unlike some rivals, even the base 2.5i trim has dual tailpipes and body-colored mirrors and door handles. The sedan has aged better than the hatchback, whose frosted taillights became passé around the same time MySpace did. Alloy wheels go on all but the 2.5i trim, while the gussied-up Outback Sport adds two-tone paint and a raised, heavy-duty suspension. (In Subaru tradition, the Outback Sport is based on the Impreza; it shares only its name with the larger Outback wagon.) The turbocharged Impreza 2.5GT, WRX and WRX STi add a functional hood scoop.

The Outback Sport and WRX STi come only as hatchbacks; all other trims are available as hatchbacks or sedans. Though both cars share the same wheelbase and turning circle — a decent 34.8 feet — urban drivers may want to go with the hatchback, as it’s 6.5 inches shorter from bumper to bumper than the sedan.

Plain, Purposeful
You can’t expect a sub-$20,000 interior to match up to what you see in glossy car ads, but the Impreza’s feels low-rent, even for this league. Materials are plain — an unpadded center armrest, acres of shiny dashboard plastic, a cardboard-grade headliner. Little things, from the keyless entry remote to the wiper stalks, are of a tinny, cheap quality. A telescoping steering wheel, which a lot of competitors offer standard, requires stepping up to a turbocharged model, and the stereo’s old-school readout displays only the first few words of song titles. For similar dough, there are more upscale cabins out there — like the Mazda3, Honda Civic and Volkswagen Jetta.

The Impreza finds its redemption through practicality. Everything just plain works: The tall windows and narrow pillars offer excellent sight lines. The gauges are cleanly organized, with a dummy-proof blue light that indicates when the engine is too cold for you to crank up the heat. The seats have supportive cushioning and a respectable grade of cloth, and my test car’s optional seat heaters worked quickly and stayed hot all day. I’m driving a Lexus RX 350 this week, and its tepid seat heaters have me missing Subaru’s.

Headroom up front is good, even with the optional moonroof. Taller drivers may want more rearward seat travel; I’m 5-foot-11, and I drove with the seat all the way back. A height-adjustable driver’s seat is standard. Bear in mind the Impreza’s WRX and WRX STi trims have shapelier seats, so my impressions of cushioning and fabric quality don’t apply there.

The backseat has decent headroom and, for this class, adequate legroom. The seat cushions are rather low to the ground, though, and taller passengers will find their knees pointing up. Amenities are limited, too: Non-turbo models lack a center armrest, and the rear seats don’t recline or move forward and backward. Behind the backseat in the hatchback is a competitive 19 cubic feet of cargo space. The seat folds down simply in a 60/40 split to form a flat, ledge-free load floor, but maximum cargo volume is 44.4 cubic feet — on the low end in this group.

The Impreza sedan’s trunk measures 11.3 cubic feet, which is also on the smaller side. The Honda Civic and Toyota Corolla have 12-plus cubic feet, and the Ford Focus boasts nearly 14 cubic feet.

Going & Stopping
Though it’s the least powerful of the four engines offered, the Impreza’s normally aspirated, 170-horsepower four-cylinder moves the car quickly enough. It’s on the larger side of four-cylinder engines in this class, and the resulting oomph comes handy at any speed — especially given the fact that the car’s standard all-wheel drive bumps curb weight to just over 3,000 pounds. That’s a few hundred pounds more than a lot of front-wheel-drive competitors.

Most Imprezas employ a standard five-speed manual transmission; my test car had a four-speed automatic. It delivers swift kickdown on the highway, but some gear changes bog down a bit during shifts. Sustained acceleration at lower speeds reveals longish second and third gears — the unavoidable result of having just four gears to choose from — and the automatic’s Sport mode, engaged by moving the shifter to the left of Drive, only drags these out longer. As strong as the engine is, I can’t help but think a responsive five- or six-speed automatic could do wonders to unlock its potential.

A five-speed manual transmission is standard. With the manual, EPA-estimated gas mileage is 20/27 mpg city/highway; with the automatic it’s 20/26 mpg. Those figures are competitive with the all-wheel-drive Toyota Matrix — the only major competitor to offer all-wheel drive on hoi polloi trim levels — but the mileage figures are nowhere close to those of front-wheel-drive competitors. EPA highway mileage estimates for the Civic, Focus and Corolla, for example, are in the mid-30s.

Turbocharged Impreza models include the 224-hp 2.5GT, 265-hp WRX and 305-hp WRX STi. We’ve driven the 2.5GT and WRX with stick shifts, and both offer punchy acceleration. Gas mileage with the turbo engines takes a modest hit, however, and all three require premium fuel. Here’s how they stack up:

My test car’s all-wheel drive worked flawlessly all week, delivering slip-free acceleration over considerable snow and ice. The Impreza employs three all-wheel-drive systems: Stick-shift models short of the STi distribute power continuously to both axles through a center viscous coupling, while models with an automatic transmission have a more advanced center differential that electronically doles out the engine power. Either way, power goes continuously to both axles, which contrasts with conventional on-demand systems that send power rearward only when it’s needed. (The STi employs the third system — a rear-biased coupling that can be adjusted to separate modes.)

Equally impressive are the Impreza’s brakes. Four-wheel antilock discs are standard; the pedal delivers progressive, controllable deceleration, making it easy to smooth out your stops. The 2.5GT, WRX and WRX STi have beefier braking hardware.

Ride & Handling
Past Subarus have ridden on the firmer side, but the company is taking a softer approach with its current products. That’s evident in the Impreza, whose base suspension rivals the segment’s best in terms of overall ride comfort — namely, the Corolla. My test car traversed winter-disheveled pavement with the aplomb I’d expect in a midsize family car. Only over extended stretches of bumpy asphalt did it start to lose its cool, but that’s often unavoidable in small cars with short wheelbases.

Also impressive is that the Impreza combines this comfort with pretty sharp handling. The steering wheel requires a bit more effort to turn at low speeds than most compact cars do, but it transmits decent feedback and good turn-in precision at higher speeds. On the highway, the wheel feels sufficiently weighty at 12 o’clock; the car tracks well, as this class goes, and you won’t find yourself making constant, fidgety corrections.

If you’re into carving corners, the Impreza does so with noticeable body roll, and at its limits it feels as nose-heavy as any of its front-wheel-drive rivals. But even then, it handles predictably — ease off the gas, and it’s easy enough to nudge the nose back onto its intended path.

Turbocharged Imprezas get larger wheels and sport-tuned suspensions; both will undoubtedly affect ride and handling. We’ve reviewed the 2.5GT and WRX, however, and neither rides too firm. (The normally aspirated Outback Sport, meanwhile, has a raised, heavy-duty suspension with 0.2 inches higher ground clearance. That will affect things, too, but we haven’t evaluated it.)

Safety, Reliability & Features
With top scores in front, side, rear and roof-strength crash tests, the 2010 Impreza earned Top Safety Pick status from the Insurance Institute for Highway Safety — no longer an easy feat, given the IIHS’ addition of roof-strength evaluations this year. The list of standard safety features includes six airbags, antilock brakes and an electronic stability system; that last feature is both important and impressive, given that less than half the major nameplates in this segment include a standard stability system. Click here for a full list of the Impreza’s safety features.

Parents with small children will note that the top-tether anchors reside at the very back of the cargo area — not a convenient spot if you want to store groceries or luggage in back when there’s a child seat strapped into the second row. Both outboard backseat positions include lower Latch anchors.

The base Impreza 2.5i starts at $17,495 — a lot for a small car, but all-wheel drive adds to the cost. It’s fairly well-equipped, with standard power windows and locks, cruise control, a basic CD stereo, air conditioning and remote keyless entry. The automatic adds $1,000, and moving to a hatchback runs another $500. (Remember, the automatic is standard on the 2.5GT and unavailable on the WRX or WRX STi, and the STi comes only as a hatchback.) Among the options are an upgraded stereo with steering-wheel audio controls, USB/iPod stereo integration, a moonroof, heated seats, leather upholstery and a navigation system. It bears mentioning that here, as in a few other Subarus, you can get heated seats covered in cloth as well as leather.

Impreza in the Market
Cabin quality aside, practicality is king at Subaru, and the Impreza has no shortage of it. This has been a winning formula for the brand, if its sales success in a tough market is any indication. Arguably more so than any other automaker, Subaru has managed to minimize the inherent drawbacks of all-wheel drive — namely, a higher price tag, more weight and lower gas mileage — to make its advantages all the more attractive. For those who have to deal with snow, ice or hilly terrain, the Impreza deserves a lot of consideration. Shoppers who don’t need all-wheel drive, however, shouldn’t be lured: Competitors still deliver better gas mileage and a lower starting price.