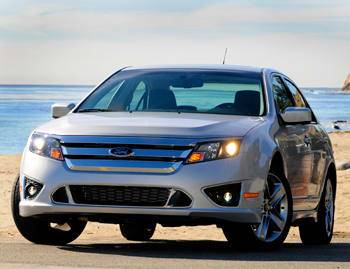 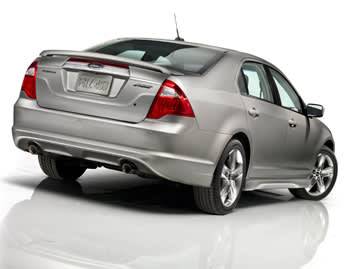 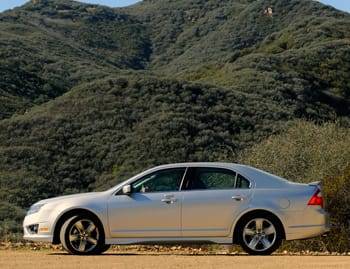 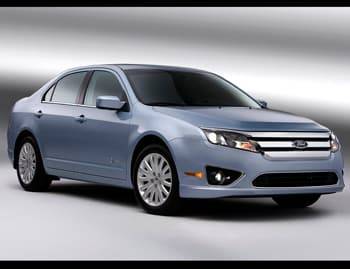 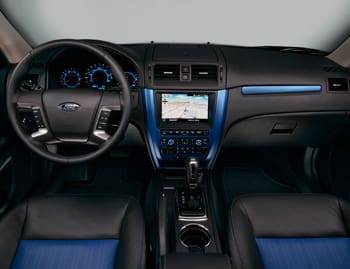 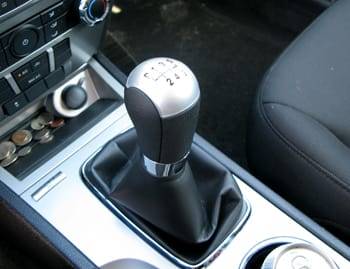 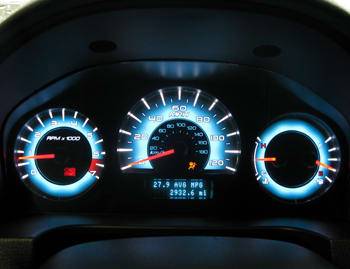 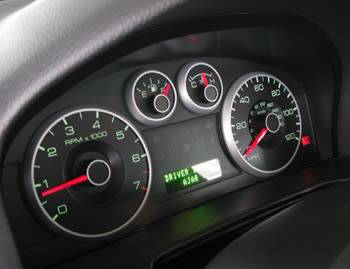 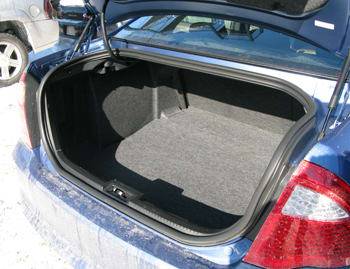 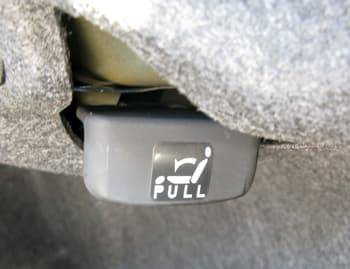 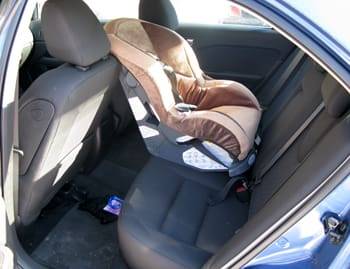 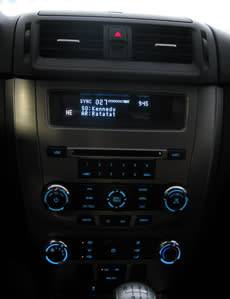 1/12
The front and rear of the Fusion have been radically altered for 2010. A deeper grille and new headlights and taillights make the biggest impact.

Editor’s note: This review was written in January 2009 about the 2010 Ford Fusion. Little of substance has changed with this year’s model. To see what’s new for 2011, click here, or check out a side-by-side comparison of the two model years.

When it debuted in 2005, the Ford Fusion had the heavy task of replacing the once-dominating Taurus. It certainly found its niche in the segment, even if it fell short compared to competition from Honda and Toyota. The second-generation Fusion arrives this spring and, thanks to a number of significant changes and a few cosmetic ones, the 2010 version will be a major competitor in the midsize segment.

Forget the bold new grille — which is even bigger and shinier than last year’s — or the upgraded interior; what really sets the 2010 Fusion apart is its smoother ride, wonderful new four-cylinder engine and a number of standard features that make it a good deal as well.

What’s Changed
The most noticeable change is the Fusion’s exterior design. The original Fusion debuted the three-blade grille that has quickly become the new face of Ford products. Now, that chromed look gets a shot of steroids; the grille is taller and narrower, with a pronounced downward angle coming from the slanted headlights. Where the old Fusion had a much more horizontal appearance, the new Fusion seems a bit angrier. It’s definitely a cutting-edge look.

The hood has a noticeable dome on it. In sports cars, that’s often referred to as a “power dome” because the extra space is needed to shoehorn large engines under the hood. The Fusion clearly doesn’t need the space, but the look gives it a powerful air. Even the SE trim I tested had jewel-like headlights and fog lights. In back, the taillights have been beefed up, now featuring a honeycomb-type effect that kind of mimics what LED taillights look like, but without the cost of LEDs. It’s a smart move.

Inside, the Fusion is so subtly different that a lot of people might think nothing has been changed. I drove the old and new models back-to-back over 600 miles of total driving, however, and can attest that they are worlds apart. The materials that make up the doors and dashboard are still the same shape, but the top of the dashboard has a new finish to it that makes the 2010 model feel not quite as cheap as the previous generation.

The bigger changes are to the seats, which are much more comfortable now, especially for long trips. They offer more support and the cloth is high-quality and looks like it’ll hold up well over time. The SE model has all power adjustments except for lumbar support, which can be adjusted using a knob.

Ford also slickly revamped the gauge cluster: In place of the old plain-white numerals on a black background is a blue-and-white background with space-age-like numerals. It’s nearly identical to what Honda uses in the Civic, it probably cost the company very little to change and it makes a world of difference in appearance.

The center stack of controls is the other major change. The display has been raised to the top of the stack to keep your eyes closer to the road. Substantial knobs are used to control the volume, tuning, air-conditioning temperature and vent speed.

Performance
Undeniably the most impressive aspect of the 2010 Fusion in the week I spent with it was its new four-cylinder engine. The 2.5-liter produces 175 horsepower, which makes it one of the most powerful fours on the market. That power translates to a real-world driving experience that is surprisingly sporty. It doesn’t feel like there’s a V-6 under the hood, but neither is there any desire for a V-6. The four-cylinder accelerates robustly during passing maneuvers on the highway, and it’s the same when merging on highway ramps. Cruising at 70 mph is a breeze, and the engine never seems to struggle.

The 175-hp engine is a 15-hp improvement over the outgoing entry-level Fusion, but mileage has increased as well; it’s now rated at 23/34 mpg city/highway. Unfortunately, most of my testing was done in temperatures well below 20 degrees and at mostly 70 mph. On a drive from Detroit to Chicago in these conditions, I averaged 29 mpg. The 34 mpg highway rating is the highest in the segment, besting the Toyota Camry, Chevy Malibu and Honda Accord.

I’ve tested those engines in other Ford products, and they’ve proved competent but not overly memorable from a performance standpoint.

My test car was equipped with a six-speed manual transmission that replaces the five-speed manual in the previous model. A six-speed automatic is available with the four-cylinder and standard with the V-6. The manual was relatively smooth, if a tad boring. If you’re into sporty driving, this is not for you. If you’re into thrifty driving or have a long commute, it’s probably preferable to a heavy clutch and tricky shift gates.

Third gear was where I found myself most, in its sweet spot of acceleration and around-town speeds.

Steering wasn’t as heavy as the 2008 Fusion I tested the week before I had the 2010. (The 2009 model year was a short one for the Fusion, with no noticeable changes from the 2008 version, so Ford kept 2008s in its test fleet.) The new Fusion has a much lighter feel all-around, which is a blessing for navigating parking garages. I found the center point a bit light on the highway; there was just a bit too much play in the wheel. But I still preferred the overall steering feel to the old model.

Ride quality is also significantly improved in the new Fusion. It’s worlds more comfortable now, with a ride that rivals the new Chevy Malibu without feeling as disconnected as the Toyota Camry. It’s a nice tradeoff. I also found the 2010 very quiet. It isolated road and wind noise remarkably well, especially as I drove through a horrible winter storm with 35 mph wind gusts.

This segment is crowded with very good cars. I’ve tested them all, and the new Fusion ranks high on my list for its four-cylinder performance, which I think rivals — if not bests — the rest, mainly because it never seems like there’s a lack of power. It may not feel anything like a V-6, but it has none of the typical four-cylinder tradeoffs, like weak passing power. Steering may be an issue for those who like heavier setups, like those found in the older Fusion, the Mazda6 or the Honda Accord.

A Fusion Hybrid is scheduled to go on sale this year with a very healthy mileage rating of 41/36 mpg city/highway. This makes it more efficient than Toyota’s Camry Hybrid but less efficient than the Toyota Prius. However, the Fusion Hybrid offers an alternative both to the Prius’ hatchback body style and to its design, which some find off-putting.

Features
The Fusion comes decently equipped at its starting price of $19,270 for the base S model. It comes standard with cruise control, 16-inch aluminum wheels, a tilt/telescoping steering wheel, a trip computer, a CD stereo with four speakers, stability control, four-wheel-disc antilock brakes and traction control.

Move up to the SE at $20,545, and you get 17-inch steel wheels with painted covers that look remarkably like aluminum wheels, dual exhaust, fog lamps, body-colored side mirrors, a six-way power-adjustable driver’s seat, Sirius Satellite Radio and six stereo speakers.

The Fusion Sport gets the 3.5-liter V-6 standard, as well as a sport-tuned suspension, 18-inch aluminum wheels, chrome exterior accents, a spoiler and unique bodywork. It also comes standard with Sync, an eight-way power-adjustable driver’s seat and upgraded leather seats.

Other available options and packages can be added to lower trim levels, including Ford’s superb Sync system, which cost just $395 in the past. Pricing hasn’t been announced for 2010. Sync allows drivers to plug in an iPod or another MP3 player and control the player via spoken prompts. Just say, “play artist Bruce Springsteen,” and every Boss track on your iPhone will be queued up.

The optional navigation system has been upgraded with new Sync features as well, including live traffic, weather, sports scores and even local movie listings. All can be controlled by voice commands or via the touch-screen interface. I haven’t tried the system out in a Fusion yet, but it’s similar to the one in the Lincoln MKS, which was exceptionally easy to use and had a crisp, clear screen. The Fusion’s screen, however, is larger than the Lincoln’s, at a gigantic 8 inches.

Navigation commands can be controlled by voice, too. The optional nav system comes with an upgraded Sony stereo that has a 10GB hard drive and 12 speakers.

The trunk is also quite big, at 16.5 cubic feet. That’s bigger than the Accord’s 14, Camry’s 14.5 and the Malibu’s 15.1 cubic feet. The Mazda6 is slightly bigger, at 16.6 cubic feet. You can lower the Fusion’s rear seats via latches mounted near the trunklid, so there’s no need to go into the backseat.

All measures of legroom, headroom, hip room and shoulder room are on par with the rest of the segment, but the backseat feels larger in both the Accord and Mazda6.

Safety
A full complement of airbags is standard in the Fusion, including side-mounted airbags for the front-seats and side curtain airbags for both rows. The big improvement on the safety front versus the old Fusion is the inclusion of electronic stability control standard on even the base model. The system, along with standard four-wheel-disc antilock brakes, adds a tremendous amount of control to the vehicle and could help it earn Top Safety Pick status from the Insurance Institute for Highway Safety, which requires a stability system to earn that distinction. That also requires top crash-test ratings, though, and the 2010 Fusion has not yet been crash-tested by either the federal government or IIHS.

A blind spot detection system is also available as an option. It alerts drivers when a car is in their blind spot so they don’t change lanes at the wrong time. Ford’s system uses sensors that can also detect an approaching car when you’re backing out of a parking space. This is a fairly new technology that I have yet to test, but it shows real-world utility.

Fusion in the Market
Ford has completed a very successful update of the Fusion for 2010. It’s priced competitively and comes relatively well-equipped, even in its most base form. Factor in the excellent mileage and terrific driving experience, and the four-cylinder model really shines in today’s midsize sedan market.

Even the new design stands out in a crowd. I don’t really like to proclaim a car a winner or a loser, but it’s hard to argue with all the improvements Ford has made to the Fusion.