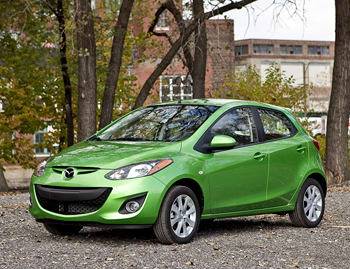 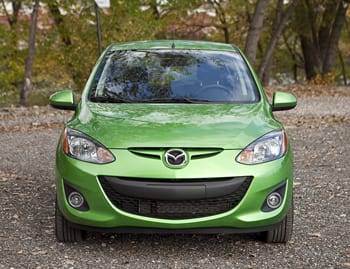 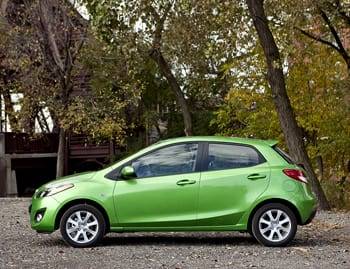 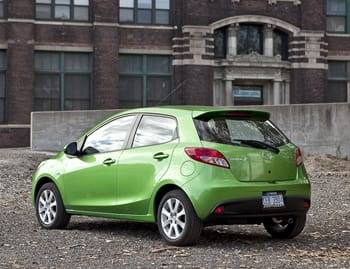 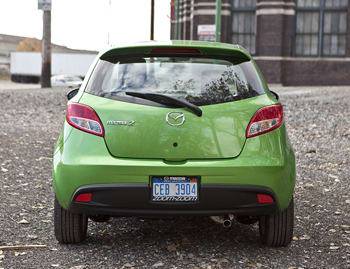 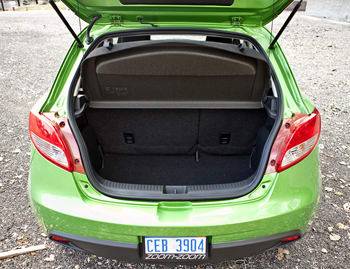 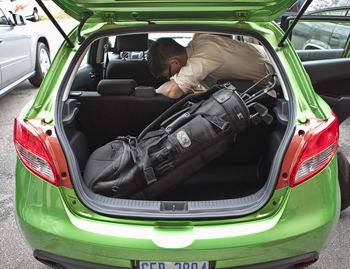 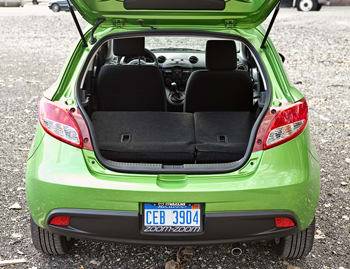 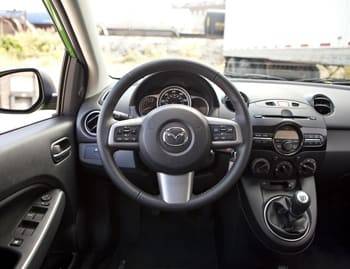 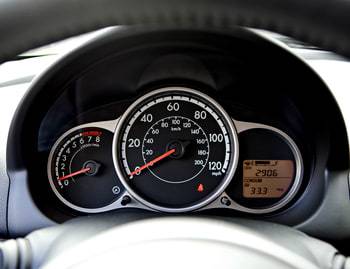 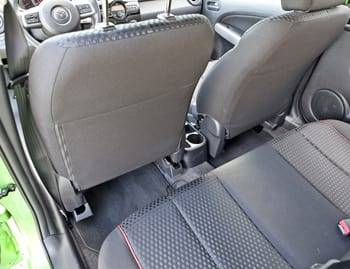 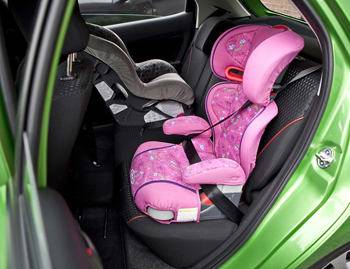 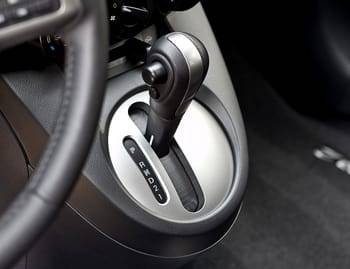 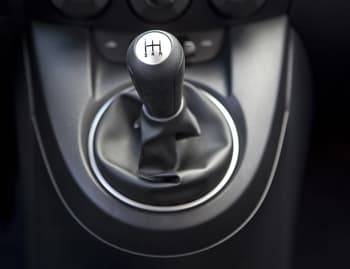 The Mazda2 is a small car that drives like a small car — and that’s a compliment. Some cars feel bigger than they are, which can be good if you also get a sense of strength and solidity.

The Mazda2, though, is like a welterweight fighter: all quickness and agility, without sacrificing ride and practicality. I kept looking for excuses to drive it.

City Driving
City driving is the Mazda2’s forte. I drove the Mazda2 with both available transmissions: a five-speed manual and a four-speed automatic. Obviously, having the right gear on hand for quick maneuvers is simple with the manual because you control the gear selection, but the automatic is also very well-matched to the engine. When I wanted to zip into a spot in traffic, the automatic usually chose the right gear.

The manual has a light clutch that’s easy to feel when it’s picking up the gear, and the shifter is short and direct. There’s none of the rubbery feeling that can plague some entry-level cars. It’s fun to shift through the gears in the Mazda2, and it happens with a good, solid feeling.

The steering is also good. It’s very light and quick, but it doesn’t feel over-boosted or twitchy in city driving. It just felt like I was steering a very light car — because I was. Like the transmission, the steering feels like it’s dialed-in well to the car. The same can be said for the brakes: Instead of a mushy pedal, it gave me the right amount of feedback to judge how hard I needed to press the pedal to stop. There isn’t a lot of effort required, mind you, but the brakes are easy to get a feel for. It cornered well, too, even in the tight confines of Chicago.

All the stuff that makes you stop, go and turn is really well-tuned. The car feels like a unified machine, ready to zip wherever you want it to in the city.

There was only one real issue I noticed: The sloping A-pillar (the one that supports the windshield) can obscure pedestrians stepping off the curb. I got used to it the more I drove, but you’ll have to judge for yourself. Other than that, visibility is really good.

Highway Driving
On the highway is where you’ll notice you’re driving a small, light car, and that’s not always a great thing. Right off, there was fair amount of road noise, and passengers noticed a lot of wind noise. That can be common for lighter cars, because they don’t tend to have a lot of sound insulation. Neither noise was intrusive.

The steering is lively on the highway. I never felt like the car got twitchy, but other editors who drove the Mazda2 said the steering was too light at speeds above 70 mph.

If I liked the automatic for cruising around town, the highway was one place where I really preferred the manual transmission. The automatic Mazda2 runs out of steam at high speeds, and I think that’s because it could use one more gear. When you want to pass, what you get is pretty much what you’d expect from a small, four-cylinder engine: a lot of noise but not a lot of surging forward. This was less of a problem with the manual.

The Mazda2 absolutely shines in one aspect of highway driving: its ride. You hear the car go over expansion joints, but you don’t really feel it. Also, some small cars — notably the Honda Fit — seem to porpoise over lumps in the road, but the Mazda2 really soaks them up. I took the Mazda2 for a weekend of bike races and came out of it as fresh as I have from some other, larger cars — maybe fresher. Whoever tuned the Mazda2’s suspension should be commended, especially because the Mazda2 takes curvy highway on-ramps pretty flat, too. It’s tough to get both of those attributes in one car.

Practicality
Cars almost always make you compromise somewhere, and with a small car that can be in its practicality. The Mazda2 is no exception. I’m a bigger guy, and while I didn’t feel cramped while driving the Mazda2, there’s no way someone my size could have ridden behind me. A shorter person might have been OK, but either way it’s a tighter fit back there than it is in a Fit or Nissan Versa. (Check the photographs to see how child-safety seats fit, in case your passengers tend to be toddlers rather than adults.)

On the other hand, the cargo area is surprisingly large. In some hatchbacks, there’s just not a lot of room behind the rear seats to put stuff. Such is not the case with the Mazda2. I easily fit all the gear I needed for a weekend away in the hatch area without having to fold the seats over. When I did fold the seats, I found I had enough room for my large cyclocross bike without having to remove both wheels. That’s nice, because it means the Mazda2 is competitive with the Fit and Versa in the bike-carrying department. The stats show the Versa and Fit are much larger (the Fit has 57.3 cubic feet of maximum cargo area, the Versa has 50.4 and the Mazda2 brings up the rear with 27.8). What I found, though, was that the Mazda’s space is usable. In other words, there isn’t a ton of vertical space, but from side-to-side and front-to-back, there’s a lot of room.

Overall, it’s a handy car, but I think it’s best-suited for young couples, singles or people with children who are still in car seats.

Family Relations
The Mazda2 is related to the Ford Fiesta, in which I’ve also spent time. My quick take, though, is this: The Fiesta has the flashier interior but, while it has more power than the Mazda2, I can’t say I really noticed a massive difference in speed or power. (This could be because the Fiesta weighs more than the Mazda2.)

Overall, the Mazda2 is just more fun to drive and the ride is more comfortable. The Fiesta is available as a sedan or hatchback, while the Mazda2 can be had only as a hatchback.

Exterior & Interior
As is the case with many new Mazda models, the Mazda2 has a big, grinning grille opening. I like it on other Mazdas and I like it even more on the Mazda2, because the car is smaller. It looks like a little baby, grinning away. There are also some subtle, fenderlike bumps on the side that remind me of the Mazda3. Taken as a whole, you can really tell it’s a member of the Mazda family.

The inside is very nice, though spare. There are plenty of cupholders, the gauges are easy to read and the radio is easy to operate, but there’s no “wow” gadget. Heck, the only way to hook your iPod to the stereo is through a headphone auxiliary jack.

In a way, I think that’s good: There’s too much going on in modern interiors that distracts from driving. But I also know I’m in the minority in liking a simple interior. Either way, I think Mazda deserves a star for not wrapping the dashboard/center stack area in some cheap, metal-finish plastic. The Mazda2’s design is simple and clean.

Mileage, Safety & Reliability
As I’ve said, the Mazda2 is related to the Fiesta, but one area where there’s a noticeable difference between the two is in the mileage department. Where the Mazda gets an estimated 27-29 mpg in the city and 33-35 mpg on the highway, the Fiesta gets 28-29 mpg city and 37-38 mpg highway (40 mpg in the fuel-saving SFE edition).

As a new model, the Mazda2 has not yet been crash-tested, nor is there sufficient data for reliability ratings.

Mazda 2 in the Market
I’ve driven pretty much everything in the small-car field, and the Mazda2 is one I’d recommend any shopper take for a test drive. Its ride is the best in the category, yet it’s still more fun to drive than many. If you’re the type who likes something sporty, you’ll like the Mazda2. If you want a car that won’t beat you up — you’ll like the Mazda2.

I’d also recommend the manual transmission, even though I didn’t dislike the automatic. I just think the manual is the icing on the cake when it comes to driving enjoyment.