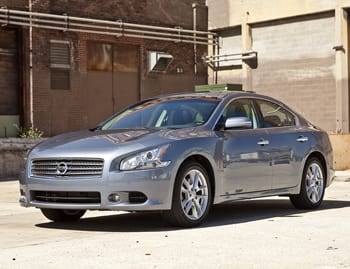 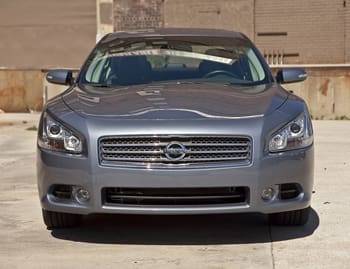 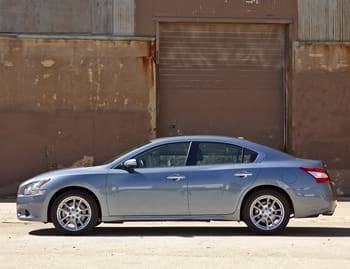 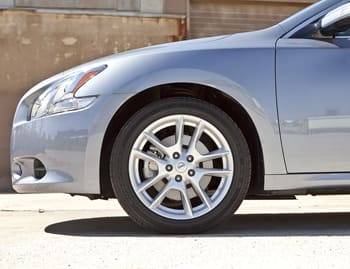 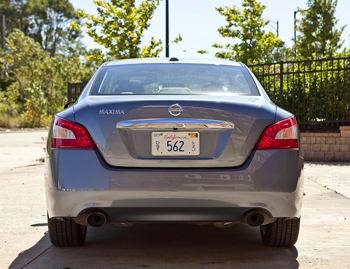 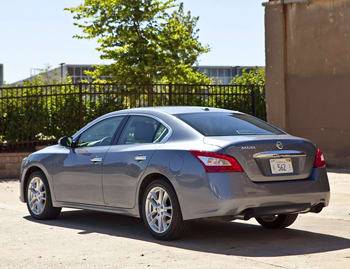 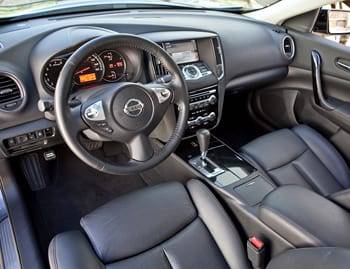 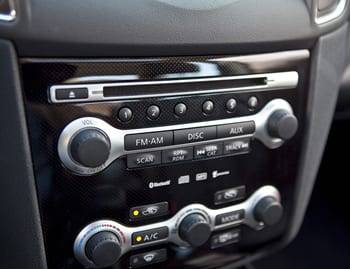 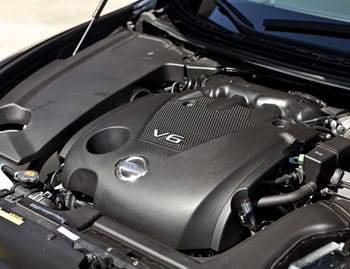 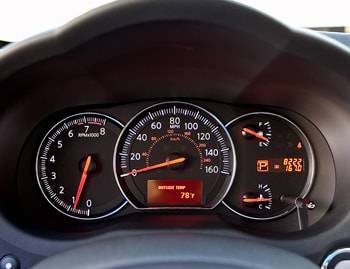 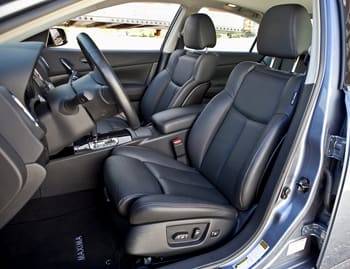 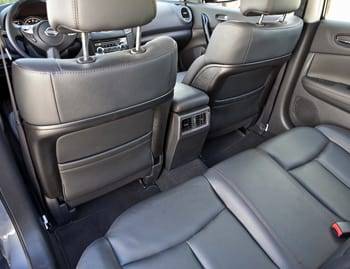 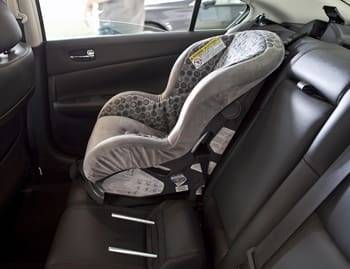 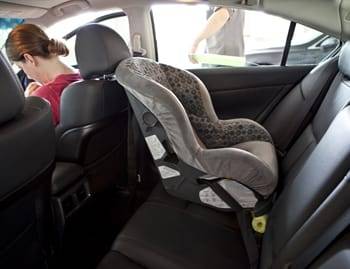 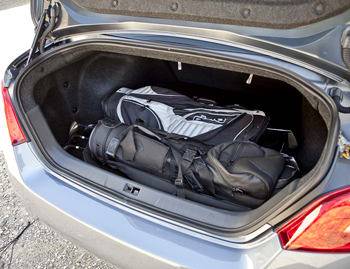 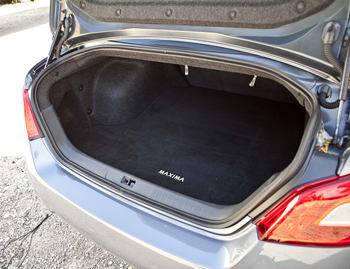 1/16
The Maxima&#39;s boldest angle is head-on. If the sedan is going to grab your attention, it&#39;ll be because of that grille.

Editor’s note: This review was written in October 2010 about the 2010 Nissan Maxima. Little of substance has changed with this year’s model. To see what’s new for 2011, click here, or check out a side-by-side comparison of the two model years.

The large sedan is making a comeback these days and the Nissan Maxima succeeds because it doesn’t equate lots of interior space to whalelike exterior dimensions, making it enjoyable to drive.

It has sporty ambitions, despite the fact that it’s a front-wheel-drive car that packs a continuously variable automatic transmission. The Maxima is also comfortable and well-equipped, and some trims have extremely competitive pricing.

While 2011 versions of the full-size four-door are now hitting dealerships, we tested the virtually identical 2010 version.

Styling
There’s nothing like a first glance to grab shoppers’ interest, but the Maxima’s looks are a bit strange. It has elegant curves all over, especially in the rear, that remind me of the most recent models from Infiniti, Nissan’s premium brand. Then there’s the grille.

It looks like the company took an ax to a stylish front end, affixed a chrome grille to the resulting vertical edge and moved on. It’s an unfortunate look, but it’s large and at least it  stands out.

Performance
If you’re a car enthusiast, a car with a standard 290-horsepower V-6 engine probably sounds like a good thing. If you kept researching and learned that the power goes to the front wheels via a CVT, though, you might dismiss the car as a bloated beast that would be a handful to control, unable to hold a candle to a rear-wheel-drive equivalent.

That’s too bad, though, because those are the Maxima’s specs, and this car completely outclasses its competitors in terms of driving dynamics and pure fun.

The engine itself has more power than the competition — besides the turbo V-6 in the more expensive Ford Taurus SHO or the Hemi V-8 in the Chrysler 300C and Dodge Charger — and gets decent gas mileage: an EPA-estimated 19/26 mpg city/highway, which is nearly identical to a non-turbo Taurus.

The CVT wasn’t an issue for me. I own a four-cylinder Subaru Outback with a CVT, and other four-cylinder CVT cars with sporting intentions, like the Suzuki Kizashi, often exhibit an odd sensation  under hard acceleration. It’s nothing most people will likely notice or complain about, but sport sedan drivers will turn up their noses at the sight of the letters C-V-T.

Without a traditional automatic’s familiar shift points, the sensation of acceleration in these cars is quite different from what you’re used to, and it can be unsettling. The Maxima transitions from a cruising speed to accelerating  instantaneously  when you hammer the gas pedal. There isn’t the kickdown of a traditional automatic, just acceleration. You’d think this is exactly what driving enthusiasts would like about CVT technology.

What I loved most, though — besides the sound of the V-6 from the huge dual exhaust tips — was the Maxima’s handling. At 190.6 inches long overall, it’s more than a foot shorter than the Taurus and 7 inches shorter than the Toyota Avalon. This leads to a better-handling car. Never did the Maxima exhibit the body-lean issues those other two have on highway off-ramps. It felt downright nimble by comparison.

Interior
When a car gets to be a few years old it usually looks dated next to competitors that have been more recently redesigned. At roughly three model years of age, the Maxima’s cabin  still seems up-to-date compared with the newer Taurus. I think the Avalon is a bit more upscale, but it’s also more expensive.

The dash and cockpit design is more sports carlike than those two as well, and that’s Nissan’s aim. I liked my test car’s  leather seats, too; the base version has cloth seats. The leather ones are extremely comfortable but still offer lots of support and thick bolstering.

The dashboard and controls are well-laid-out, with Nissan’s usual high-quality materials providing both pleasant tactile interactions and sturdy feedback when using buttons and knobs.

In a large sedan like this, the backseat is extremely important. While not as big on paper as the Taurus, I found the rear accommodations airier than the Ford. There’s plenty of headroom and legroom in the two outboard seats for full-size adults, and my kids’ child-safety seats fit more easily in the Nissan than they did in the Ford.

Due to the car’s relatively short length, there isn’t much trunk space, totaling 14.2 cubic feet. The Taurus offers a massive 20.1 cubic feet, and even Nissan’s midsize sedan, the Altima, has a bigger, 15.3-cubic-foot boot. The Avalon’s trunk is similarly small, at 14.4 cubic feet.

Getting the top-of-the-line Premium Package, which raises the Maxima’s price to  $36,640, adds a dual-panel moonroof, a power sunshade for the rear window, a 7-inch display screen, USB connectivity and a backup camera.

My test car had the $700 Monitor Package, which adds the screen and tech features from the Premium Package. It also had a $400 Cold Package that not only added heated front seats but also a heated steering wheel, which is unusual for a car in this price range.

I didn’t have the navigation system, but it’s available as part of a $1,850 Technology Package.

Safety
The Maxima is equipped with six airbags, including seat-mounted side-impact airbags for the first row and side curtain airbags for both rows. It received the highest overall score of Good in front and side-impact crash tests conducted by the Insurance Institute for Highway Safety, but was rated Acceptable for roof strength and Marginal for rear-impact whiplash protection.

The Maxima also earned five-star ratings from the federal government’s National Highway Traffic Safety Administration in front, side and rollover tests using 2010 testing guidelines. The government has since revised its testing to take into account more variables during crashes, but the Maxima hasn’t been put through these new tests yet. You can read about the new testing system here.

Maxima in the Market
Even with a few years under its belt, the Maxima remains an alluring choice in the large-sedan market. It’s aimed at driving enthusiasts looking for a roomy sedan, and it delivers for them. The slight dings against it in the safety  and cargo departments shouldn’t be enough to stop you from buying one if your test drive wins you over.