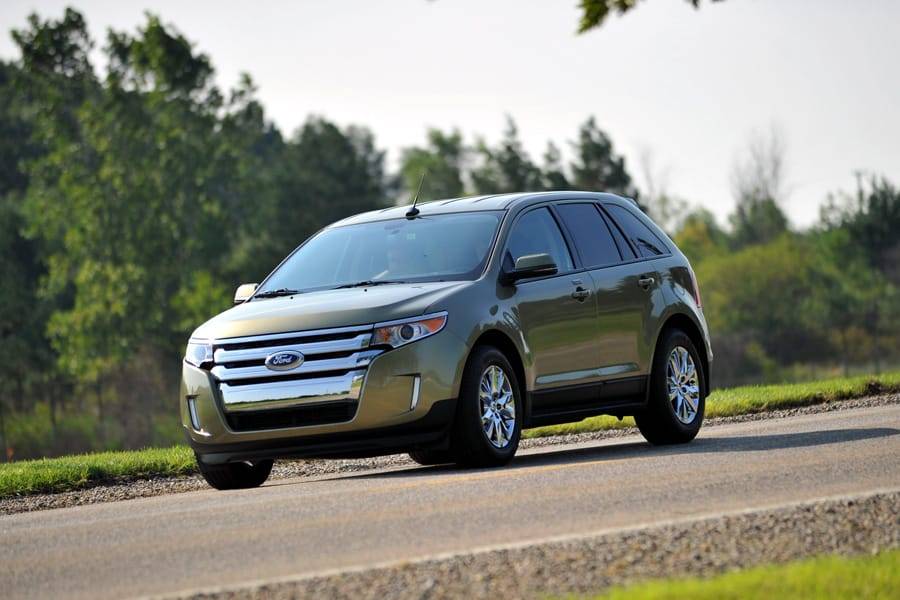 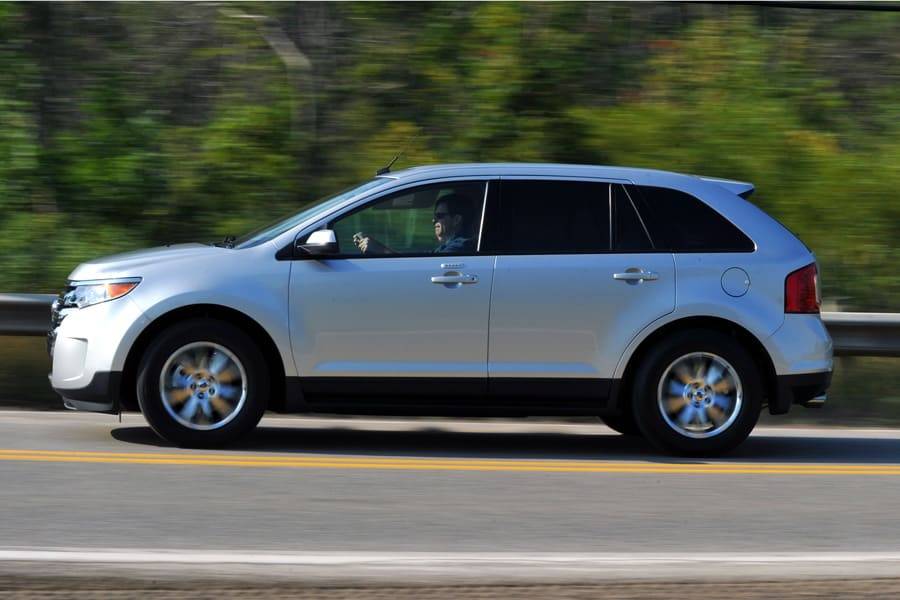 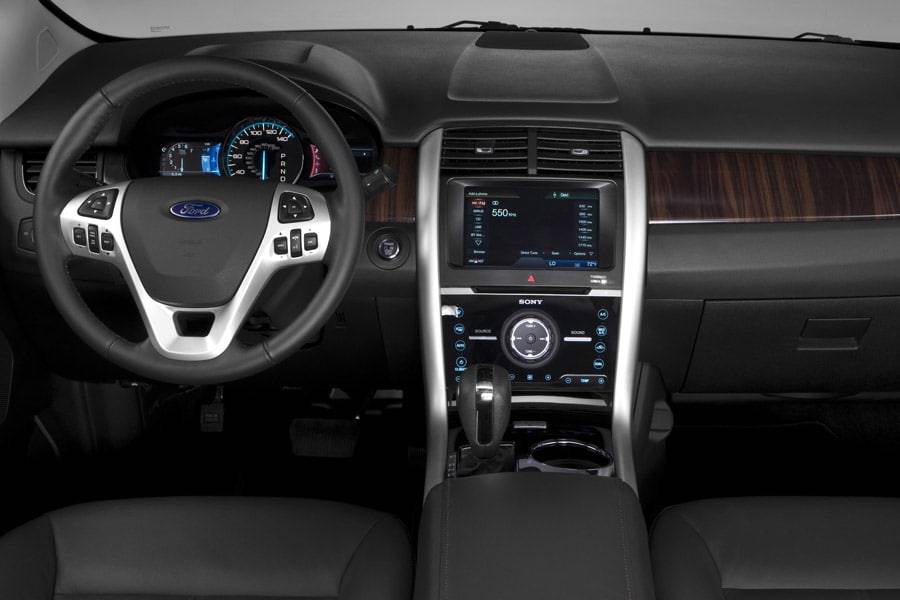 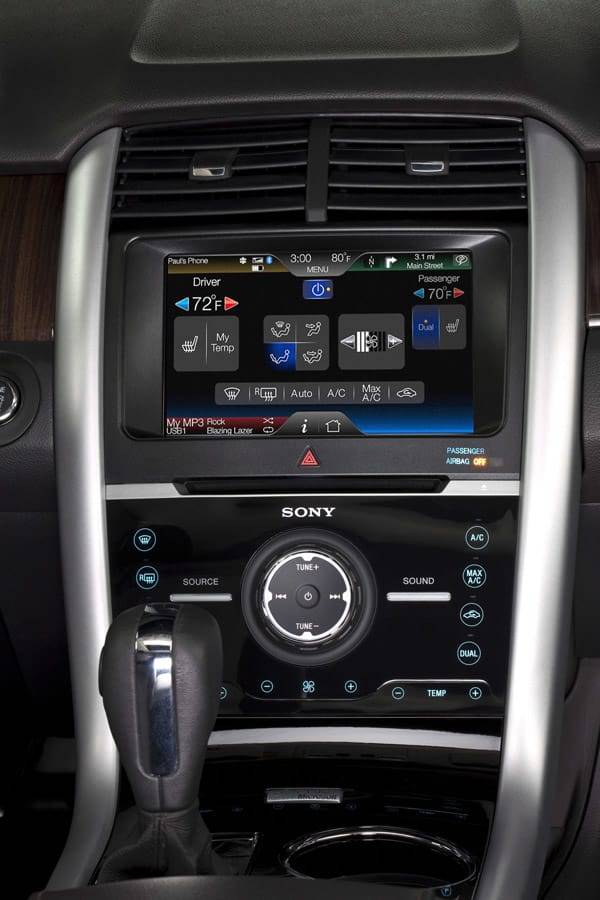 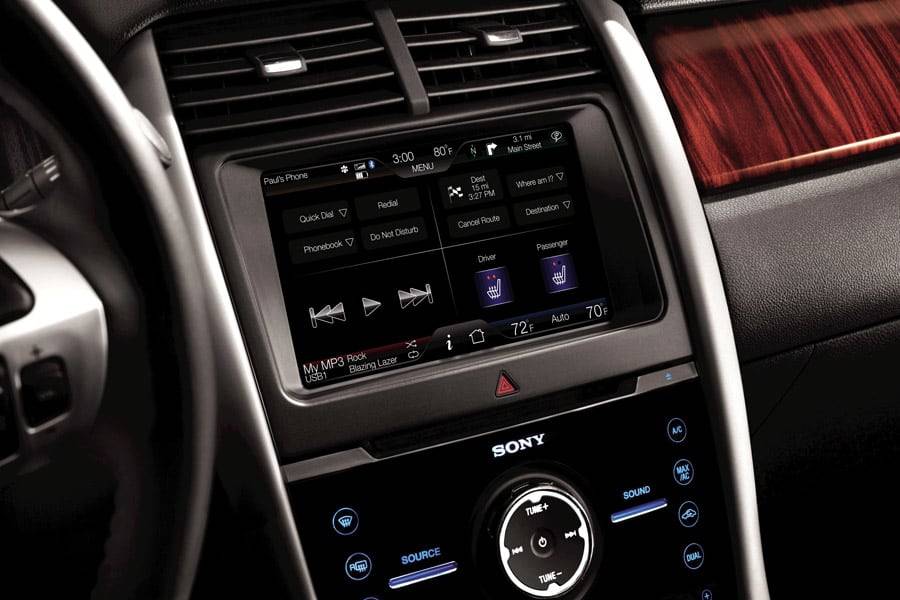 Ford’s Edge five-seat crossover body-type SUV has been an above-average student in its class. Never boasting segment-leading attributes, it remained popular because of its size, looks and, most recently, its high-tech features. For 2012, the Edge lineup adds a new 2.0-liter, turbocharged four-cylinder engine that moves the vehicle confidently while returning excellent gas mileage.

The 2012 Ford Edge has a perplexing multimedia system and a surprising lack of accessible cabin storage, but it might be a sensible buy for shoppers in this class who are looking for good gas mileage and cargo space.

I tested the EcoBoost Edge with front-wheel drive. Read our take on the 2011 V-6 and Edge Sport trim models here. The 2013 model recently went on sale with few changes versus the 2011 and 2012 models. You can compare all three here.

EcoBoost’s Edge
The terrific thing about Ford’s most recent EcoBoost engine — the marketing term for its line of turbocharged power plants — is that it actually delivers on the promise of V-6 power with a four-cylinder engine. It doesn’t respond like the most robust V-6, mind you, but, for its class, it delivers nonetheless. EcoBoost is a $995 option on any of the Edge trim levels, which include Ford Edge SE, SEL and Limited. The Sport is only available with a 3.7-liter V-6. The SEL trim comes with a leather-wrapped steering wheel option, while the SEL and Limited have leather seat options.

I tested the EcoBoost Edge right after a week of driving the GMC Terrain crossover with an optional V-6 engine. Despite the Ford Edge’s higher weight — an extra 131 pounds — the EcoBoost engine outperformed the Terrain V-6 in real-world driving, even when passing at highway speeds.

EPA-estimated mileage for the EcoBoost with front-wheel drive — all-wheel drive (AWD) is only available with V-6 engines — is 21/30 mpg city/highway, which is considerably better than the V-6 Terrain’s 17/24 mpg rating. The 3.5-liter V-6 in the Edge — rated 19/27 mpg — also outdoes the Terrain. The Nissan Murano, available only with a V-6 and the most similar to the Edge in terms of interior and cargo volume, returns mileage of 18/24 mpg. The payoff there, however, is more spirited acceleration than either the Ford or GMC thanks to its 260-hp V-6.

The six-speed automatic transmission in the Ford also made for a smoother experience than you’ll get in the Terrain, AWD or not. The Terrain receives high marks from me in most respects; it just loses to the Ford here.

Where the Edge slips versus the Terrain and the rest of the class is in ride comfort. Seventeen-inch alloy wheels are standard on the base SE model, while my SEL tester had standard 18-inch wheels. Both the 17- inch wheels and 18-inch are aluminum wheels. The suspension is rather firm; road imperfections transmit through the cabin in sharp jolts, making a bumpy road a bad place to be. The Murano, which I drove recently, has a better balance of performance and comfort than either the Edge or the Terrain.

Interior & Technology
The rest of the Edge remains relatively unchanged for 2012 and 2013, including the comfortable interior.

Front and rear seats are wide and offer plenty of support for larger drivers and passengers. However, front occupants have very limited storage options. There are only two cupholders in the center console and no other easily accessible cubbies for keys, smartphones, mints, toll passes, receipts, etc. There is a storage area behind the center stack of controls, but it’s hard to reach and you have to do so blindly. The other vehicles mentioned above have abundant cubbies.

My test vehicle also came with the latest version of MyFord Touch. It’s a multimedia system that’s drawn the ire of our editors since its debut, and even though it’s been improved and I’ve grown accustomed to the touch-sensitive interface, it remains a drag to use. What driver wants to hunt for seat-heater controls on a large touch-screen, or for radio controls on a slick panel devoid of buttons?

The Terrain sports many of the same high-tech features as MyFord Touch, including optional voice recognition, but uses physical controls for both radio and climate options. The Murano takes a similar approach. I prefer both to the MyFord Touch system.

Cargo
The Ford Edge has a sizable rear cargo area: 32.2 cubic feet with the rear seats in place, 68.9 cubic feet with them down. That outdoes the Terrain, which has 31.6 and 63.9 cubic feet, respectively, as well as the Murano, at 31.6 and 64.0 cubic feet. Though these figures are in the same ballpark, the Murano and Edge have wider, more versatile cargo areas. The Terrain is narrower, though its cargo floor can be elongated thanks to sliding rear seats. If cargo is a concern, the Edge delivers.

You can see a full list of safety features in the Edge here.

Ford Edge in the Market
Outside one of Cars.com’s ambitious Shootout tests, it’s rare that I’m exposed to both a new model and its most direct competition in such a short period of time. Because of that, the Ford Edge’s flaws became more apparent. Its user-unfriendly high-tech multimedia system and lack of storage in front take away from an excellent, efficient powertrain and a large cargo area.

On a family drive with my two young children and wife, all that was overshadowed by the Edge’s uncomfortably firm suspension. If the decision were a toss-up between vehicles before, my mind was made up then. I would prefer either the GMC, for a few thousand dollars less, or the Nissan, at a nearly identical price to the Ford Edge.