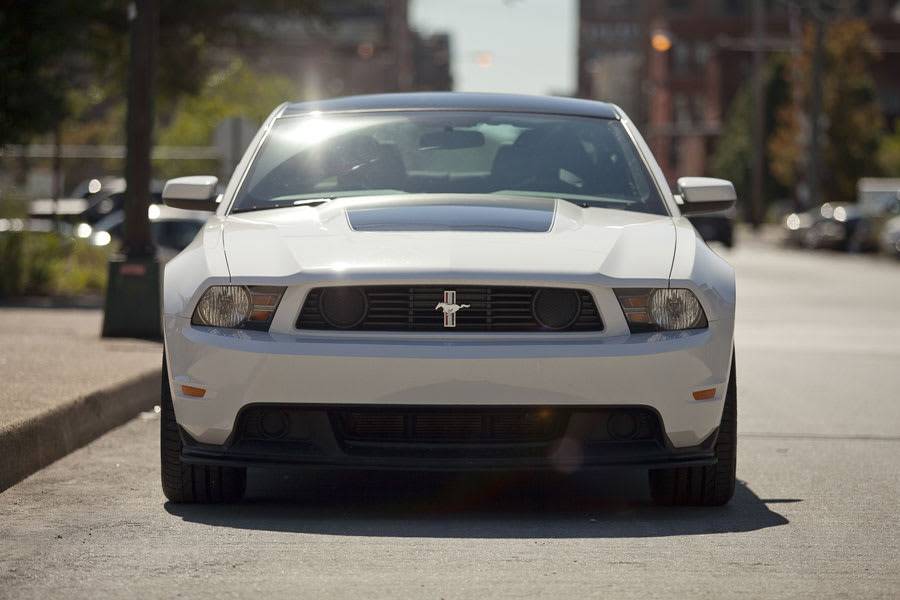 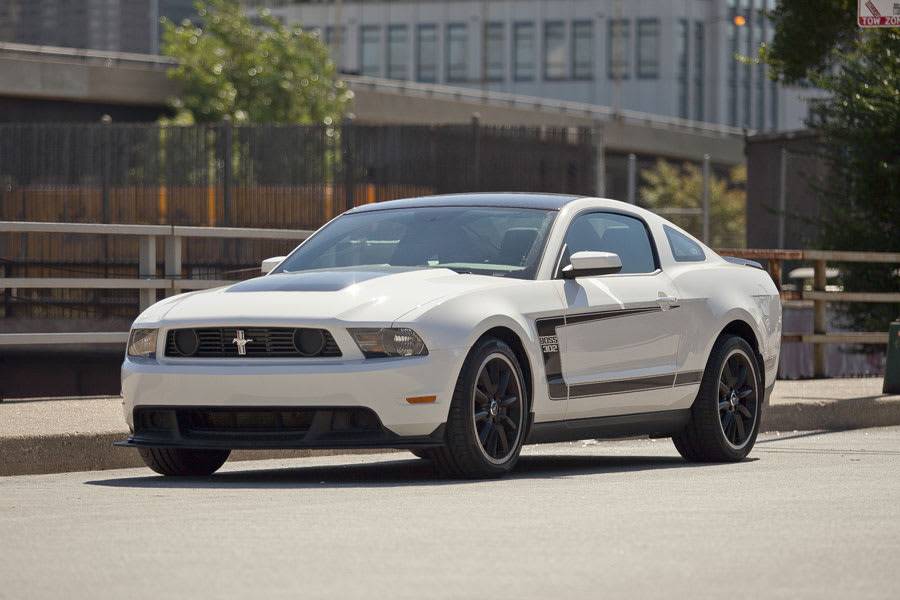 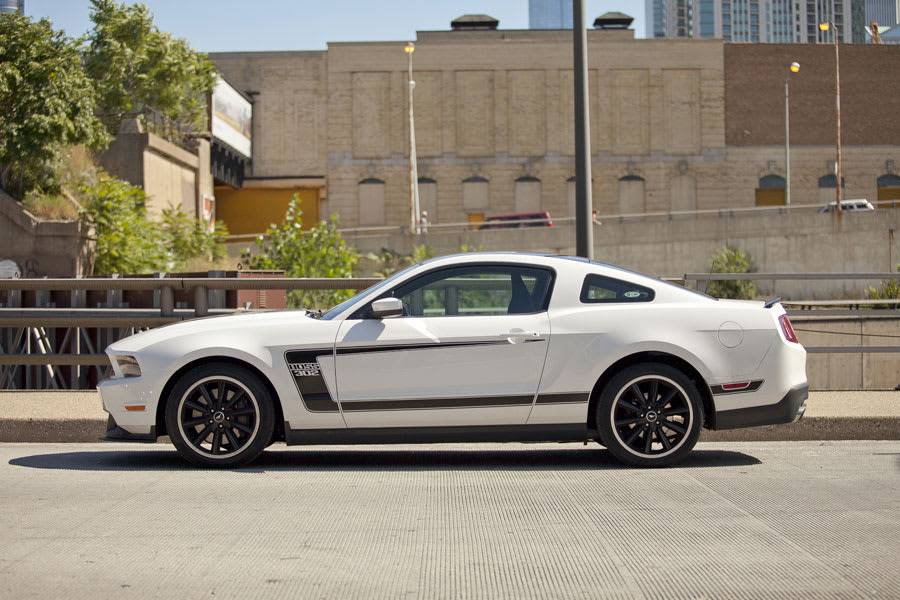 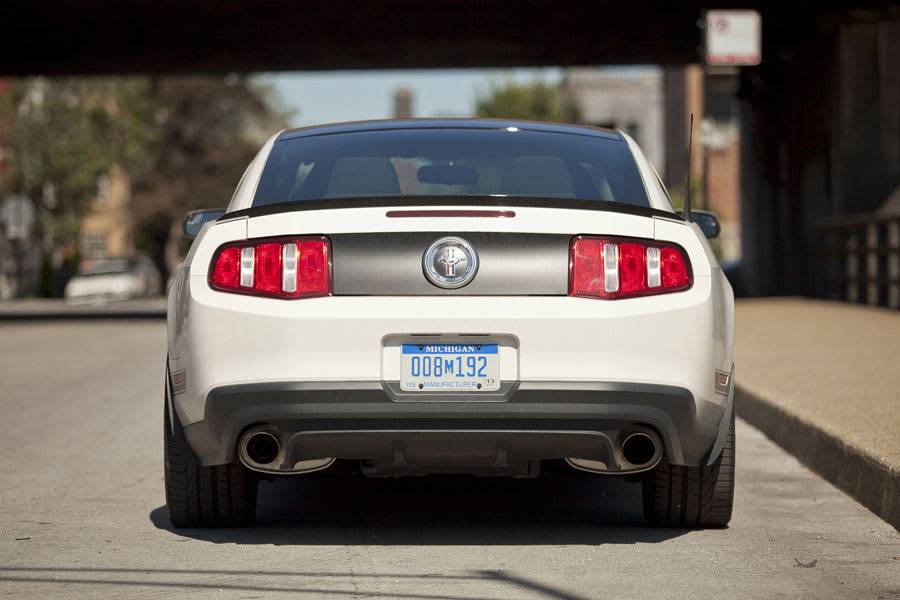 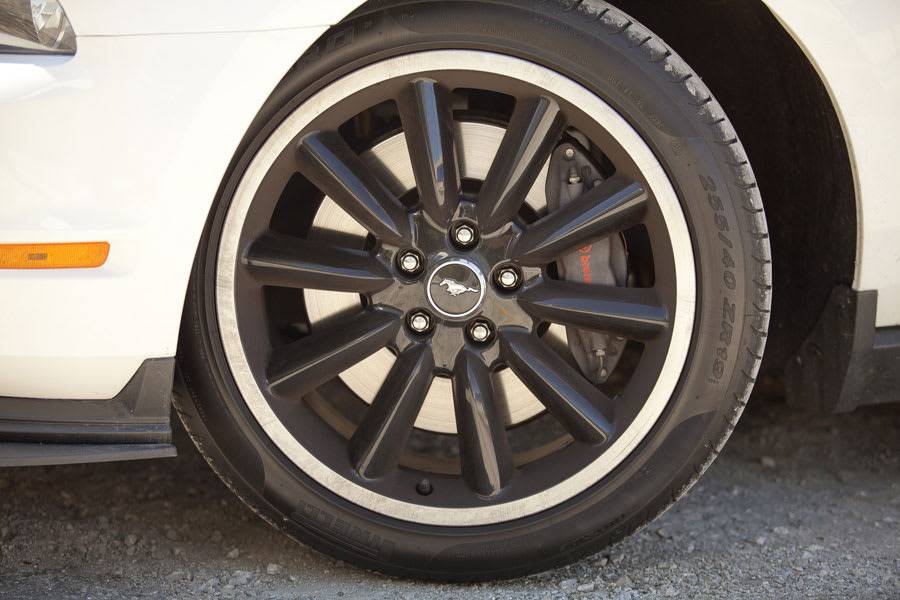 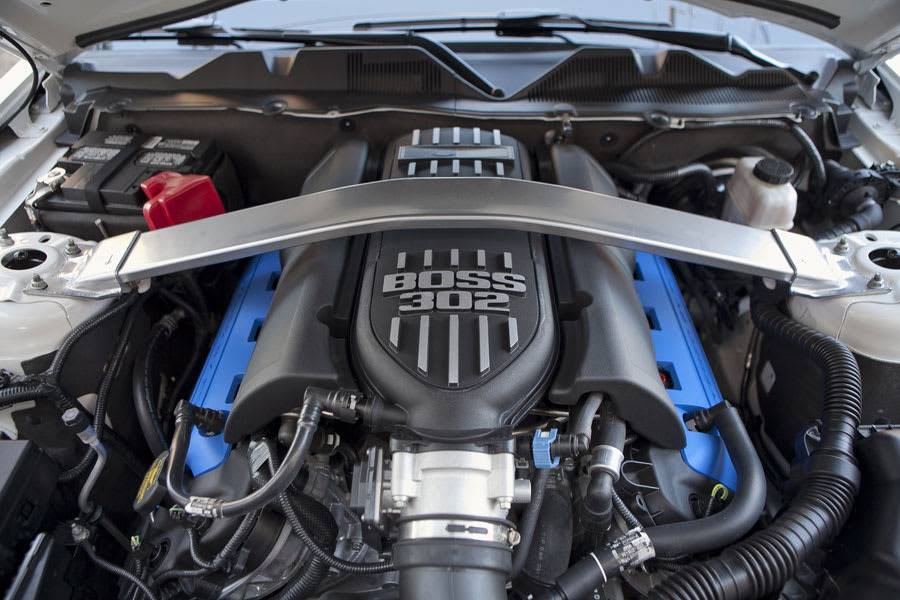 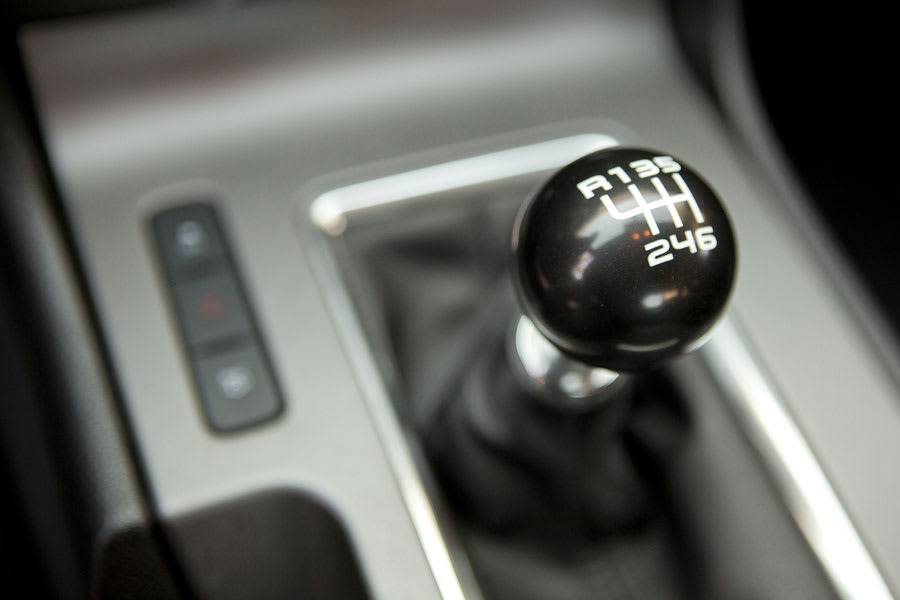 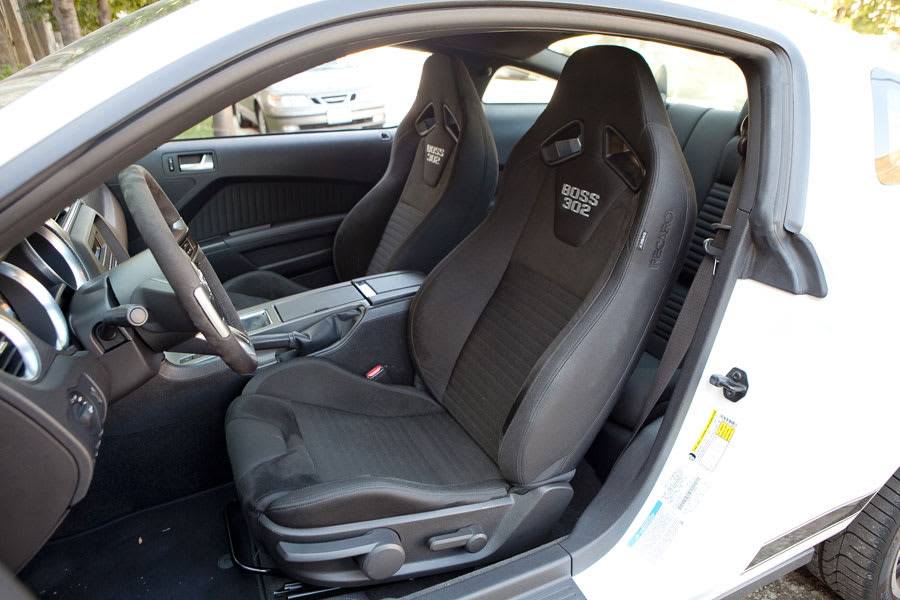 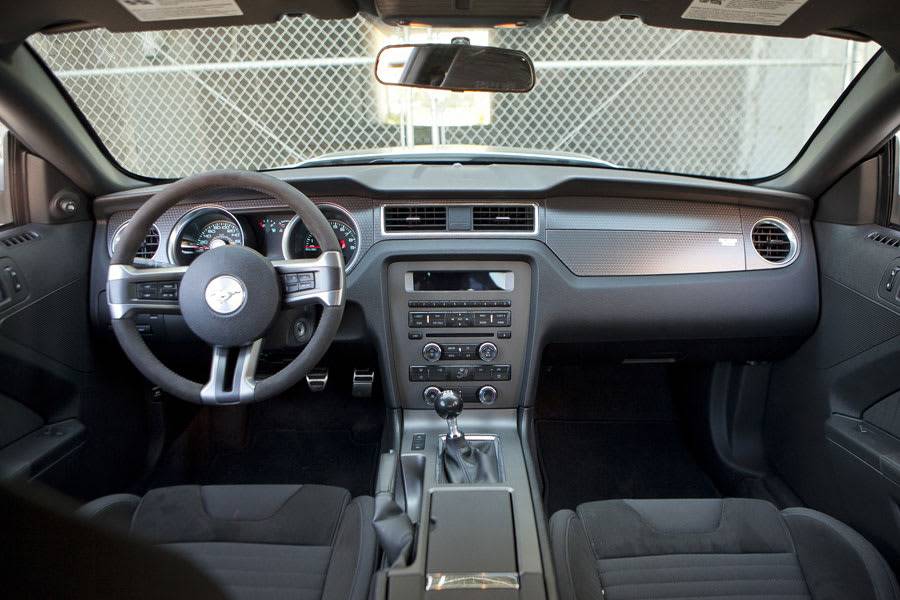 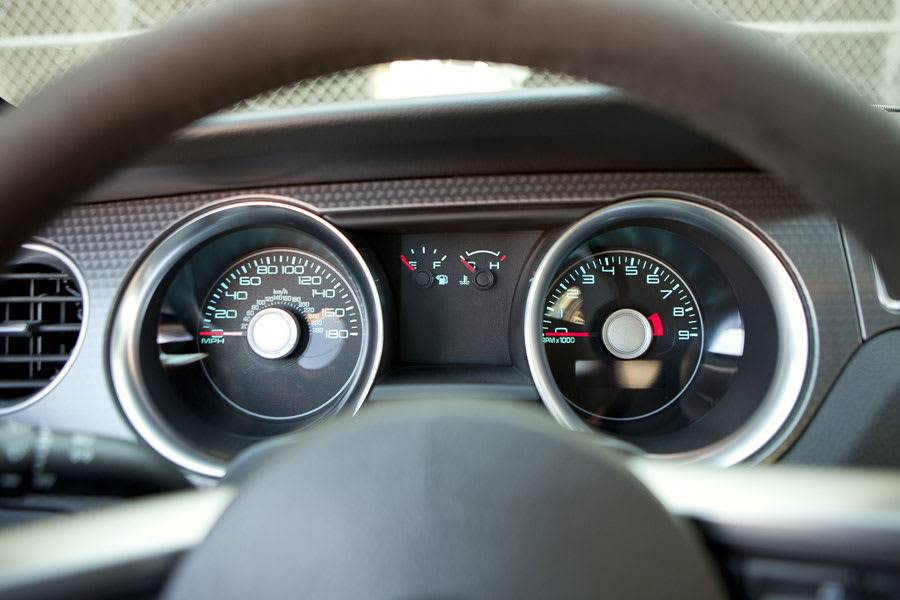 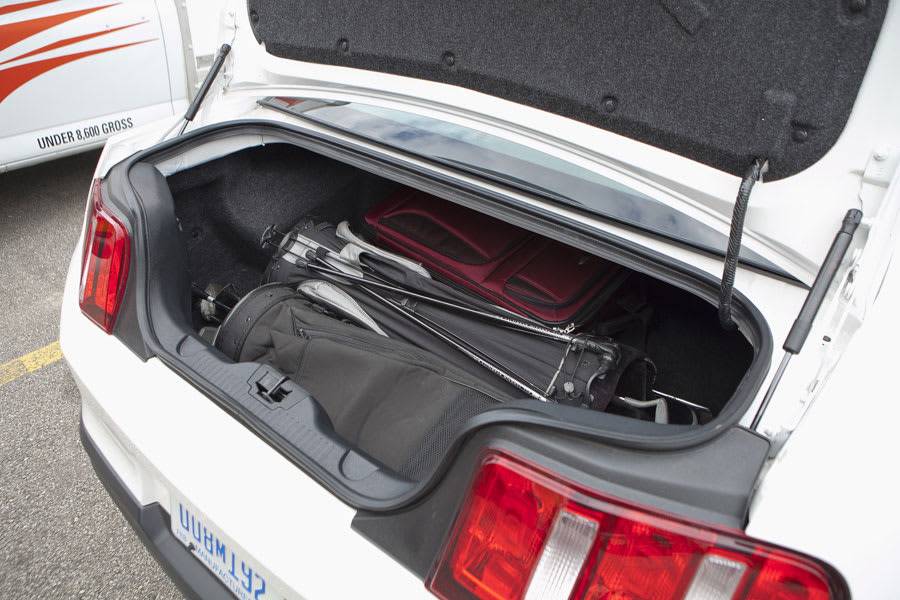 1/11
Unlike other Mustang variants, the Boss 302 features plastic molding where accessory lights would be. This is a retro nod to past Mustangs, but it looks cheap on a 2012 model. | Cars.com photo by Ian Merritt

In the past, Ford has made special-edition Mustangs not so special, giving them mild performance tweaks, custom paint jobs and not much else. The Boss 302 is not one of those Mustangs.

Track-ready yet fun for the street, the 2012 Ford Mustang Boss 302 is a pure performance machine that may be the best version of the classic car I’ve driven. And it comes topped with a wicked custom paint job.

The basic black interior is devoid of frills. There’s no stereo upgrade, no Sync multimedia system, no navigation. That’s because Boss buyers only care about what’s under the hood and under their backsides.

The 5.0-liter V-8 engine that supplies the GT with 412 horsepower gets an upgrade to 444 horses in the Boss, using revised camshafts and intakes. There’s also a quad exhaust system with two pipes heading out the back, as usual, and two side pipes exiting just in front of the rear wheels. The system generates an exhaust note so gratifying you’ll never even turn on the rental-car-grade stereo.

Our test car was optioned with a $1,995 package that included a limited-slip differential and Recaro-brand sport seats. The seats were the lone comfort feature. Wider than most Recaros I’ve tested and with the right amount of support and bolstering for my frame, I fell in love … with a seat. So did the rest of the Cars.com staff, as well as my wife, who generally blanches at the thought of climbing into the sports cars I test. (Honestly, she will never get into another Corvette Z06.) If you don’t get the optional “RECARO Seat & TORSEN Differential Package,” you’re missing out.

The Boss returns mileage of 17 mpg in the city and 26 mpg on the highway, which is identical to the GT’s mileage with a manual transmission. The Boss is only available with a six-speed manual.

Putting the Power to the Pavement
The Ford Mustang Shelby GT500 is the most powerful Mustang, with 550 hp, but all the Cars.com editors agreed that the Boss does a better job of putting all its power to the road. All the performance upgrades come together so seamlessly that the Boss feels like the pure essence of what a car should be.

A cue-ball-style knob tops the manual six-speed shifter, giving drivers a unique feel when going through the gears, although it can get slippery if your palms are sweaty. Ford calls it a short-throw shifter, but that’s only true if you compare it with other Fords. It was good, but it could have even shorter throws and be more precise.

The shifter/clutch combo was a highlight for our other editors, too. The clutch features upgraded materials to reduce wear at the extremes this car will likely experience, and it also means your left leg won’t go through a “Biggest Loser”-style workout in gridlock traffic.

Power is always important, and the V-8 erupts at the touch of your right foot, moving out from a stop with limited rear-wheel slippage. Lots of car enthusiasts like to squeal tires for the seat-of-the-pants sensation it provides, but I like to get off the line as perfectly as possible. I’m not often perfect, but the Boss 302 sure helps. Now, 444 horses is a lot of power, so when you decide to push it hard from 1st to 2nd gear, the back end can easily come loose, which is disconcerting for even the most experienced driver. But getting the rear wheels to settle down is a natural correction in the Boss, which illustrates just how good — no, let’s just say how awesome — it is.

And don’t forget, all this performance pleasure is topped off by the sound of that exhaust system.

When you hit a classic car show and hear the rumbling of decades-old monsters of sheet metal, it elicits memories of a bygone era of muscle. But all that rumbling doesn’t necessarily mean these classics are machines superior to modern sports cars. The Boss’ exhaust brings that same classic aural resonation — with a hint of IMSA racecar mixed in — but does so teamed to a car that is light years beyond any stock classic, no matter how well it’s been restored.

It’s Track Ready, Too
I’ve driven the Boss 302 on the street, where it performs as ably as any high-performance car out there. On rough pavement in downtown and suburban Chicago, it was more comfortable than plenty of other cars I’ve tested. The Recaros helped.

But the Boss 302 can go from the street to the track with the turn of a key. Literally. It’s called TracKey, and it’s red where the car’s everyday key is black.

There’s a second set of engine-control software that comes with the dealer-installed TracKey option. It increases low-end torque and engine braking and makes the throttle even more responsive. We also thought the side exhaust sounded better in that mode.

All Boss 302s come with a manually adjustable suspension system — no TracKey required. With the system, drivers use a small screwdriver-like tool to adjust each shock absorber. The settings range from one to five, with one being the softest suspension and five being the most severe for the track. We tested our Boss 302 on the factory setting of two and found it comfortable for everyday use, while still being impressive in tight turns. This was certainly the best handling Mustang I’ve ever piloted.

Boss 302 Laguna Seca
If you’re a real track aficionado — meaning you race routinely — Ford builds a limited number of Boss 302 Laguna Seca models that are not meant for regular street use. In those models, the backseat is replaced with a large X-brace to stiffen the body. The adjustable suspension is even more aggressive than the standard Boss’, and there’s an aero-kit for the front bumper. Lightweight wheels are also part of the package, which costs an additional $6,995. Again, that’s a limited model for serious racers.

Safety
In Insurance Institute for Highway Safety crash tests, the 2011 and 2012 Mustang rated Good in frontal crashes and Acceptable in side crashes. It did not undergo rear tests or roof-strength tests. The Boss 302 features the same safety equipment as other Mustangs, including antilock brakes, stability control, seat-mounted side airbags and curtain airbags. You can see a full list of safety features here.

Boss 302 in the Market
The Mustang remains a competitive car compared with the Chevy Camaro and Dodge Challenger. In Boss 302 guise, it has no equal that I’ve tested, and certainly none for $40,000.

It’s rare to find a vehicle that feels so natural to drive. The BMW M3 is probably my favorite in this regard, but the Boss 302 is as close as any car has come.