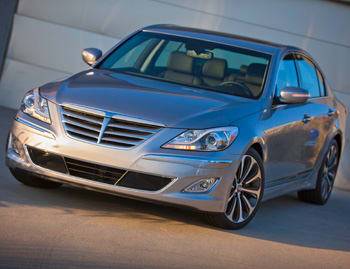 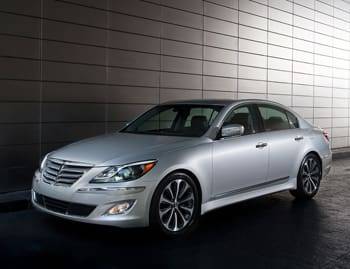 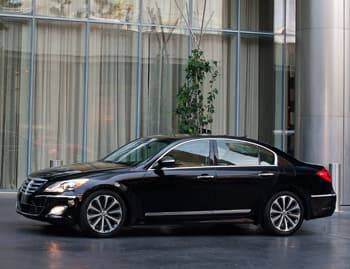 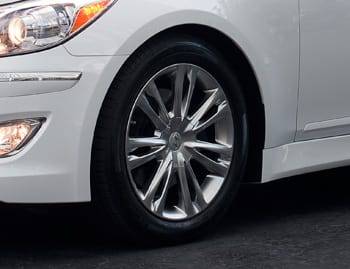 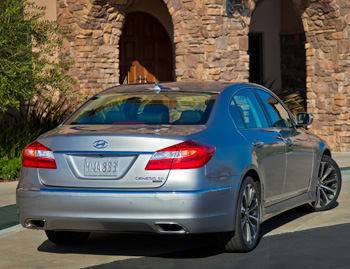 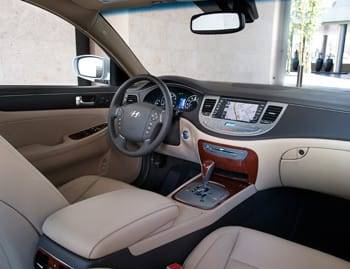 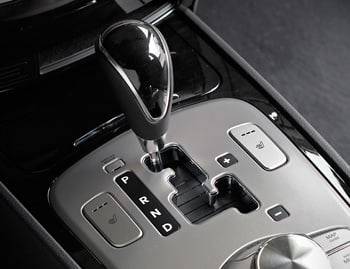 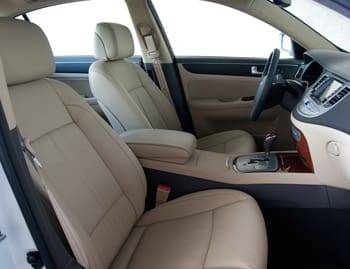 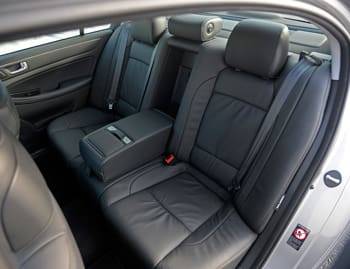 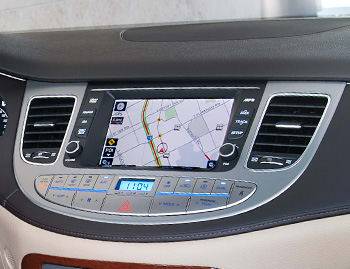 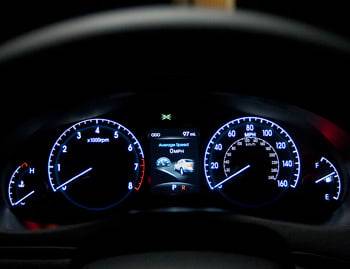 1/11
The 2012 model gets minor revisions to its looks. The most noticeable change focuses on the headlights with an intriguing LED accent strip.

When it made its 2009 debut, Hyundai’s flagship sedan, the Genesis, was a marvel. It offered rear-wheel drive, a potent V-8 option and an interior nearly on par with those of Lexus and Acura. It was so good, Cars.com bestowed upon it our highest annual award, “Best of 2009.” For 2012, the Genesis gets some mild tweaks to its looks, undercarriage and, most importantly, to the engines, including an all-new 429-horsepower, 5.0 liter V-8.

Updates make the 2012 Hyundai Genesis even better, but they might not win over today’s fickle buyers. Even so, shoppers won’t find a worthy alternative at a similar price.

Performance
There’s a choice of three engines in the Genesis, as opposed to the V-6 and V-8 originally offered. Upgraded for 2012, the 3.8-liter base V-6 now makes 333 horsepower, up from 290 hp, while the 4.6-liter V-8 — like all three engines — teams with a new eight-speed automatic transmission for slightly better fuel economy.

But the engine getting everyone’s attention is the all-new 5.0-liter V-8 with 429 hp and 376 pounds-feet of torque. It’s a monster and still returns 16/25 mpg city/highway. Called the Genesis R-Spec, this top trim level is priced at $46,500 fully loaded.

Typically when an automaker goes through the trouble of coming up with a performance name like “R-Spec,” the car itself is aggressively tuned, the ride quality suffers, and comfort is sacrificed for pure performance. One look at the 19-inch wheels wrapped in run-flat tires, and I thought I was in for a rough ride.

The second I turned out of the parking lot, the Genesis felt … sedate, like I was riding in a posh luxury car such as a Lexus LS 460 or even a Mercedes S-Class. Indeed, the R-Spec is much more of a grand tourer than a sports sedan.

The power comes on in a silky-smooth delivery, no doubt enhanced by the new eight-speed automatic transmission. There is no severe revving to launch you from the line. That smoothness matched to the eerie Lexus-quiet cabin and pillowy ride makes the R-Spec deceiving. It doesn’t seem like you’ve gotten to 60 mph in just over 5 seconds, but you’re there faster than you thought, and by your second thought, you’re at 80 mph.

If I had to travel hundreds of miles in a straight line, the R-Spec would be a great choice. Even on twisty roads through the Nevada desert, the R-Spec handled well with lots of grip, but it was a bit hard to judge your speed going into corners, which made some sweeps a bit wider than I wanted.

Then I stepped into the Genesis 3.8. Aside from the wheels, the cars look nearly identical inside and out, but there is a world of difference from the driver’s seat.

The difference in power isn’t the most significant drop in driving pleasure. Whereas the R-Spec was deathly silent, the V-6’s smaller wheels and tires led to much more noise and vibration. If I had taken the V-6 out first, it probably wouldn’t have distracted me much, but the difference was stark.

The suspension was also less tuned in. Over road undulations, the 3.8 had a floatier ride.

Traveling at 70 mph and higher on the highway was still a pleasant affair. Unless you crave power, the V-6 has enough — more than most cars in this segment, in fact.

Exterior
The original Genesis was an understated sedan. The attractive grille — sans the Hyundai “H” logo — was probably the most unique feature. For 2012 you’d have to say the redesigned headlights are the focal point. A curved LED strip bisects the headlight cluster. The LED is an accent light though, not daytime running lamps like in most luxury cars with LEDs.

There are mild tweaks to the front and rear bumpers and the rear taillights as well, but I wouldn’t call any of them significant.

The Genesis remains an attractive sedan, and sometimes understated is a good thing in today’s world of aggressively styled cars. However, many shoppers might also call it forgettable.

Interior
Clearly, the winning formula for Hyundai is offering a lot of content and quality for a lower price. The same is true even with this large sedan. It’s hard to think of what exactly competes with the 3.8 trim level’s $34,200 price considering its size. You could get into an Acura TL or a Lincoln MKS, cars with similarly sized V-6 engines with front- or all-wheel drive, but both are considerably smaller inside.

Inside, Hyundai has definitely matched the Acura in terms of a premium feel and has surpassed Lincoln. The leather seats are downright plush while still offering plenty of support. The optional leather-wrapped dash exudes an upscale feel to the entire cabin.

What I often find in large sedans these days is that they don’t feel all that large inside. Not so with the Genesis. It’s cavernous in front and back, with wide front seats and a backseat with 38.6 inches of legroom. This is identical to the MKS and bests the TL, Infiniti M and Lexus GS, which measure 36.2, 36.2 and 36.4 inches, respectively.

The trunk is respectfully sized at 15.9 cubic feet, but it’s not tall enough for really bulky items. Golf clubs won’t be an issue, though. Still, that figure again trumps most of the above-mentioned competition by at least a cubic foot. The MKS is an exception with 18.7 cubic feet.

That’s pretty good, but most buyers will opt for at least the Premium Package, which adds 18-inch wheels, a navigation system with a 7-inch screen, 14-speaker stereo system, moonroof, backup camera and a power adjustable steering wheel, bringing the price to $39,000.

The Genesis 4.6 features everything in the 3.8 Technology Package at $44,500 and adds just a few extra touches, like chrome body accents and a wood and leather steering wheel. The $1,500 price increase to get even the smaller of the two V-8 engines is a modest one.

And as you get to the top-dog Genesis 5.0 R-Spec for $46,500, you get those impressive 19-inch wheels and the added performance benefits I mentioned above, but no other additional equipment over the 4.6.

The navigation system and upgraded stereos worked quite well. The 3.8 with the tech package and above comes with a vibrant display between the two center gauges to show trip info as well as multimedia selections such as song titles and radio stations. However, the glare of the Nevada sun made all the displays hard to read at the worst parts of the day.

Safety
The 2011 Genesis is a Top Safety Pick from the Insurance Institute for Highway Safety. A spokesman from IIHS says that typically a car that does not undergo significant structural changes from one model year to the next, like the Genesis, will carryover the Top Safety Pick designation. However, the IIHS has not done so for the Genesis at this time.

Neither the 2011 nor the 2012 has been tested by the National Highway Traffic Safety Administration.

The 2012 Genesis is equipped with eight standard airbags, including seat-mounted side airbags for front and rear passengers. Rear-seat mounted airbags are not the norm for any class of vehicle. Side curtain airbags for both rows are also standard. You can see the rest of the car’s safety features and specs here.

Genesis in the Market
Hyundai’s lineup of cars and crossovers is impressive, with many leading their respective segments in terms of both value and performance.

The Genesis has a problem finding a segment to fit into because it is priced so far below some competitors from Infiniti, Lincoln and Lexus and higher than a Chrysler 300 or Nissan Maxima.

Can a Hyundai compete on status levels with the premium brands? Probably not, even if the car is on par or better than many of them. On the other side, it seems too expensive to non-luxury shoppers, making it a hard sell indeed no matter how good a vehicle it may be.

I would say this, though: Ford has been trying for years to rebuild Lincoln’s car lineup to match the historic view of that brand’s powerful, elegant cars of the past. Hyundai may have in fact built a better Lincoln at a better price than Ford.