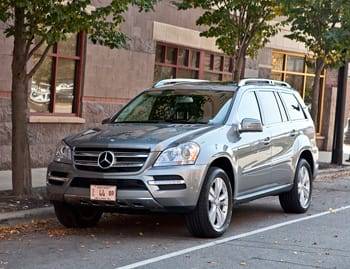 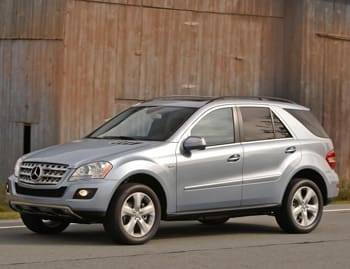 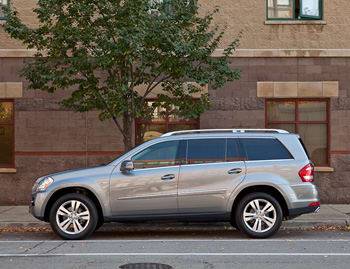 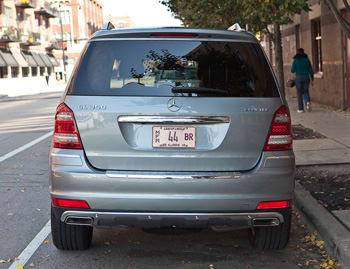 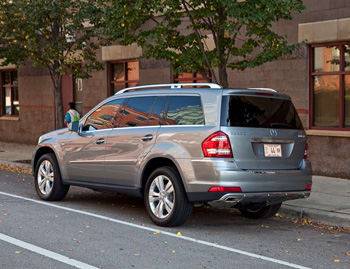 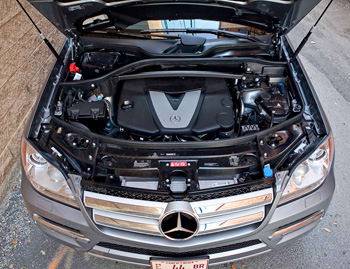 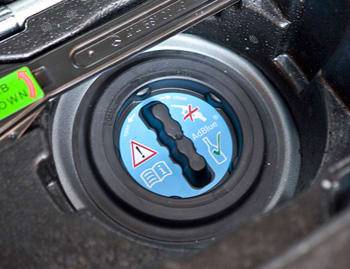 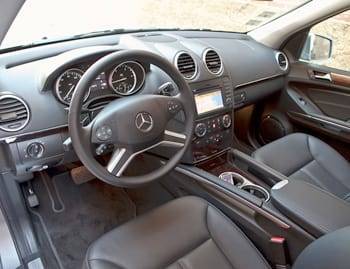 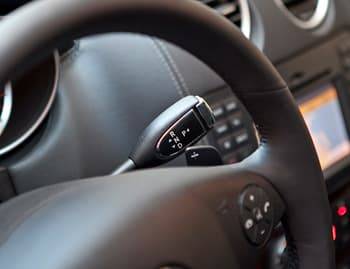 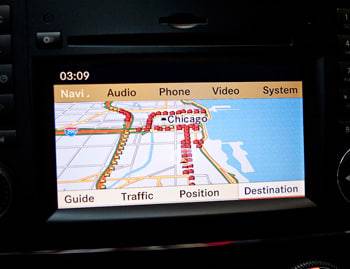 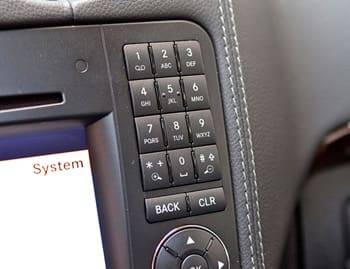 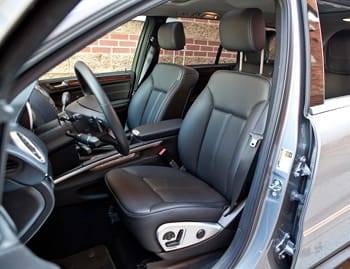 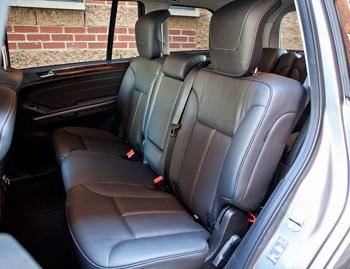 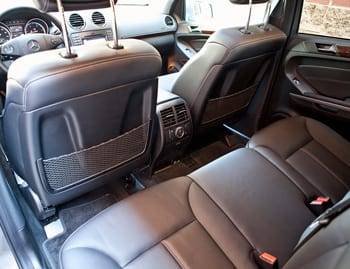 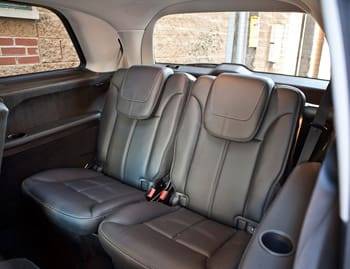 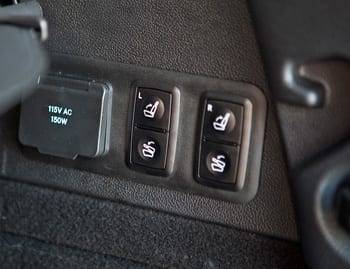 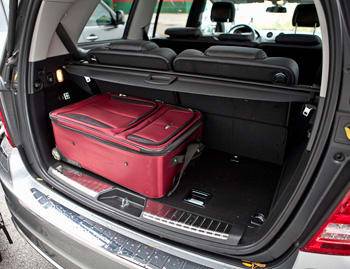 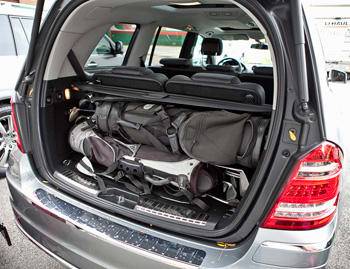 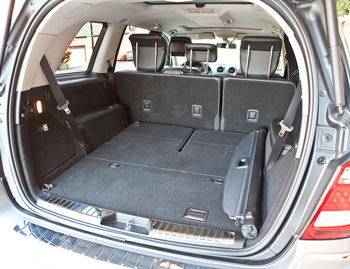 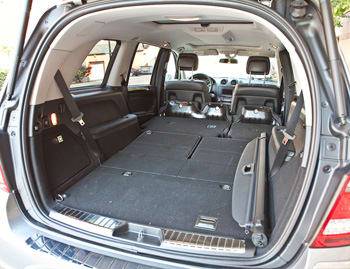 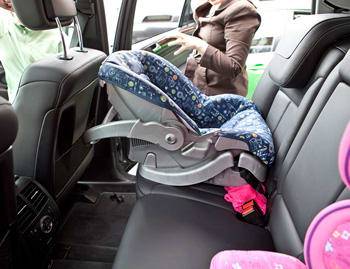 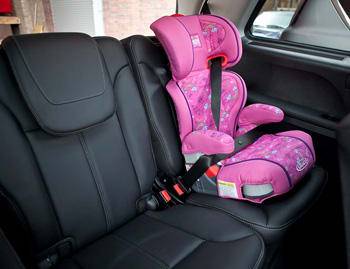 1/22
Mercedes&#39; full-size GL-Class (above) has a stronger appearance than the automaker&#39;s midsize M-Class SUV (below). All GL trim levels have LED daytime running lights, and twin hood bulges are a nice design cue. | Cars.com photo by Ian Merritt

Editor’s note: This review was written in April 2011 about the 2011 Mercedes-Benz GL350 Bluetec. Little of substance has changed with this year’s model. To see what’s new for 2012, click here, or check out a side-by-side comparison of the two model years.

Let’s face it: If you’re smitten by Mercedes’ GL-Class full-size SUV, the recent run-up in prices at the pump probably rates somewhere between insignificant and unimportant in your car search. With seating for seven, the GL-Class is a big SUV — and it gulps fuel like one. Even the most efficient version, the GL350 Bluetec diesel we tested, manages just an EPA-estimated 17/21 mpg city/highway. Likely more important to you would be a comfortable ride with commanding views, space for the family and all their stuff, and a level of luxury to justify a $60,000-plus base price.

While the GL350 Bluetec diesel delivers the cushy ride, a combination of limited interior space and some irritating qualities weigh on this already-heavy SUV.

In models where both gas and diesel engines are available, the diesel is typically more expensive. In the GL-Class, however, the diesel GL350 Bluetec, with its $60,950 starting price, is the most affordable trim in the lineup. (Two V-8-powered gas models — the GL450 and GL550 — are more expensive.) Optional features pushed the price of our tester to $72,135. For a side-by-side comparison of the three trims, all of which have all-wheel drive, click here.

Full-Size SUVs Aren’t What They Used to Be
If it’s been a few years since you’ve driven a full-size SUV, you’ll probably be surprised by how far this vehicle class has come in terms of ride comfort and handling poise. A decade ago, full-size SUVs had imprecise steering and poorly controlled body motions. Many of these flaws have been engineered out of today’s models, and the GL-Class shows how good things can be.

The GL350 is a very comfortable highway cruiser, and credit goes in part to the standard Airmatic height-adjustable air suspension. The big SUV floats softly over big dips in the road, and while you do feel it when it hits a bump or pothole, the impact is damped to the point that it doesn’t disturb you or your passengers.

The GL-Class also gives you a high driving position and great forward visibility — something that’s a supremely important factor for some shoppers.

Diesel Power
The GL350 Bluetec’s 3.0-liter diesel V-6 makes 210 horsepower. There’s some familiar diesel clatter when accelerating, though the noise is nothing like an 18-wheeler. The sound is more akin to that of the newer diesel pickup trucks from Ford and Chevrolet, but it’s not as inconspicuous as today’s quietest clean-diesel cars.

If you’re considering the GL350 over a gas-powered GL, it may be because you’ve heard that diesels produce a lot of low-end power, or torque, providing spirited acceleration from a stop. This one does — the engine makes 400 pounds-feet of torque at just 1,600 rpm — but the delivery isn’t as satisfying as in some diesel cars, like the Volkswagen Golf TDI. The Golf TDI wallops you when accelerating, pushing you back in your seat. By comparison, the GL350 feels burdened by its hefty 5,423-pound curb weight. It gets around well enough, but it doesn’t move out authoritatively.

That said, in everyday driving it’s easy to achieve average fuel economy figures that are higher than the EPA estimates. An hour-long drive on highways and suburban roads around Chicago returned average fuel economy of about 25 mpg. With a large 26.4-gallon fuel tank, the cruising range could easily stretch to 600 miles, which is good for both road trips and the inevitable day you have to hunt for a station that sells diesel.

The engine teams with a seven-speed automatic transmission. There are manual-shift paddles on the steering wheel, but they seem even more out of place in the GL than they do in most vehicles. They do, however, provide a way to hold a gear on steep grades that wouldn’t otherwise be available, as the SUV uses Mercedes’ stalk-style gear selector rather than a traditional shifter. The only real downside to the transmission during my test was that on two occasions, just after getting under way, it clunked when shifting at moderate speeds and light throttle. Hardly the kind of thing you’d expect from a Mercedes.

Mercedes cars don’t always have the best brake-pedal feel, but it feels pretty natural in the GL350. Stopping response is very linear, and the brake pedal has deep travel that lets you finely tune braking response.

The Inside
The GL’s cabin is finished in nice materials — that’s the price of entry in this class — but the interior design isn’t especially memorable. Fit and finish are also good.

Ranking as one of the more unusual upholstery decisions I’ve seen, the GL350 has a stitched leather dashboard but simulated leather seating, something Mercedes calls MB-Tex. While MB-Tex is remarkably good at emulating the real thing, you have to pay extra to get real leather on the seats — which is incomprehensible in a $60,000-plus luxury SUV.

Mercedes’ keypad interface for the optional navigation system got easier to use the longer I drove the GL350, but I’m still not a big fan of it. The screen’s menus look the same as those in the automaker’s S-Class and E-Class cars, but instead of the relatively intuitive knob controller Mercedes uses in those models, there’s a little keypad to the right of the screen. It leaves a lot to be desired in terms of usability. If I already have to reach toward the dash to adjust the system, just give me a touch-screen, please.

While the GL provides a commanding view of the road, it’s not a huge climb up into the driver’s seat, which shorter drivers will appreciate. The front bucket seats are large and comfortable, neither too firm nor too soft.

I was expecting the GL’s second row to be spacious because it’s a big SUV on the outside, but this row managed to just accommodate my 6-foot-1-inch frame. The biggest limiting factor is legroom; with the front seat adjusted to where I’d sit, my knees were nearly touching its backrest, and they would have been pressed against it were it not for the indentations in the seatback. The second-row backrests provide a few recline positions, but the seat itself is fixed, so you can’t slide it rearward for more legroom.

For a third row, the GL’s isn’t bad. I was able to sit back there, though I had to splay my legs to make them fit.

Cargo Room
As is the case in many large SUVs, despite having room for seven people in its three rows, the GL leaves little room for luggage when all its seats are in use; there’s just 14.3 cubic feet behind the third row. There’s some space underneath the cargo floor, but it’s only suitable for smaller things, like jumper cables.

The GL has a standard power-operated third row, which is a great feature because it transforms what could be a cumbersome process of folding and opening the third row into a simple operation. It even works when the second row is reclined.

Safety
Standard safety features include antilock brakes, side-impact airbags for the first and second rows, side curtain airbags for all three rows, active head restraints for the front seats, an electronic stability system and Pre-Safe. When Pre-Safe detects that an accident may occur, it can cinch the front seat belts and close the sunroof and side windows.

Check out the Standard Equipment & Specs page for more information.

GL350 Bluetec in the Market
The GL350 Bluetec rides and handles as well as anything in the full-size luxury SUV segment, and its interior is appropriately luxurious. Despite its problems, it’s also a strong seller in its class. Perhaps its most formidable challenge, however, is the stricter fuel economy standards that loom on the horizon.

Whether through eliminating weight, downsizing drivetrains or adding advanced technology, automakers will need to increase the efficiency of big SUVs. Even the Bluetec diesel version of the GL may need to become more efficient. All these steps are likely to raise vehicle prices, so if you’re interested in a big luxury SUV as it is today, you may want to act soon.