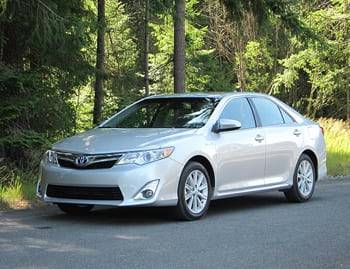 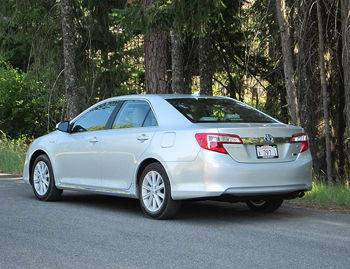 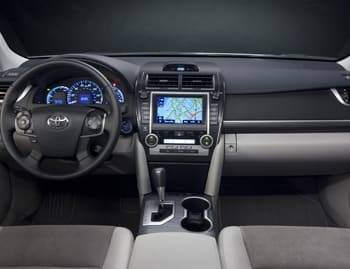 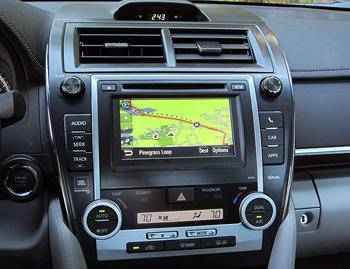 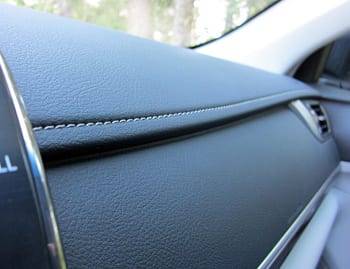 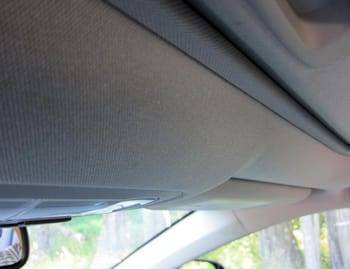 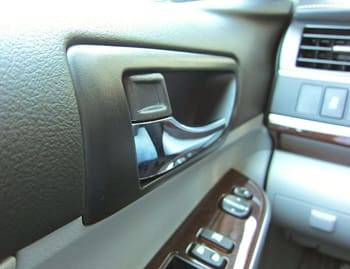 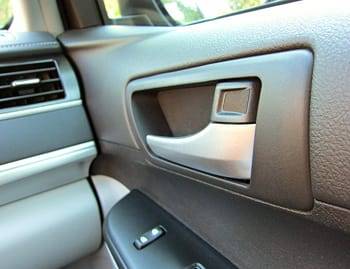 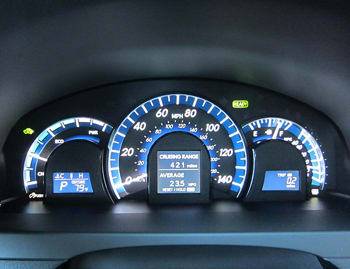 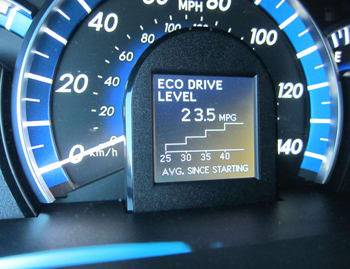 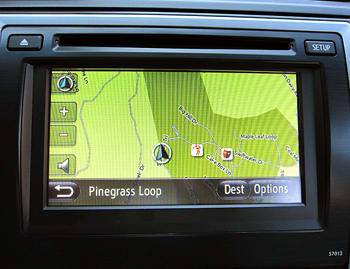 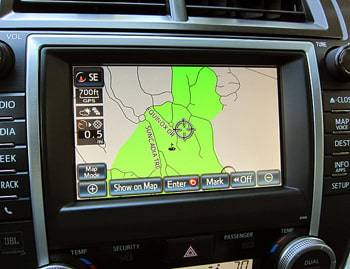 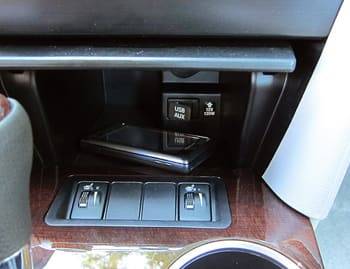 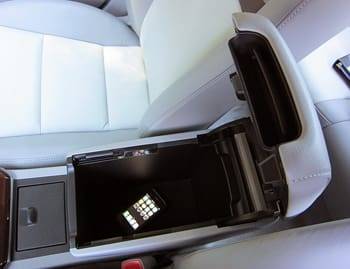 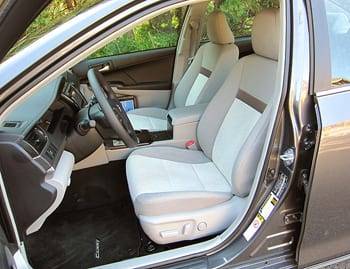 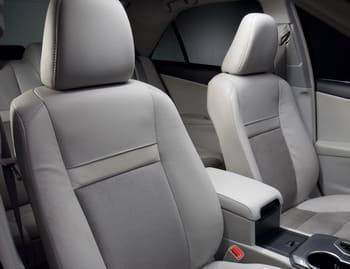 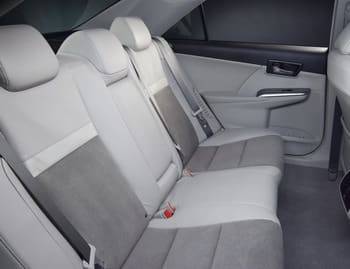 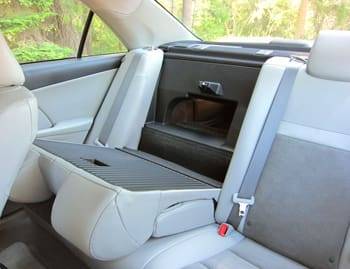 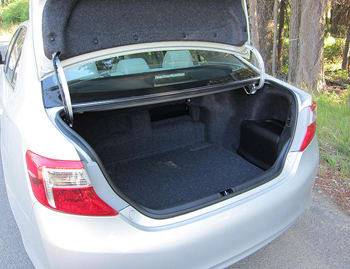 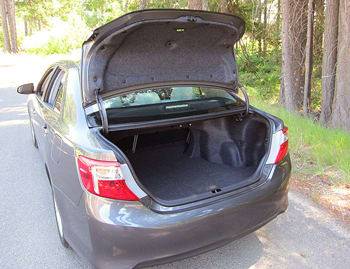 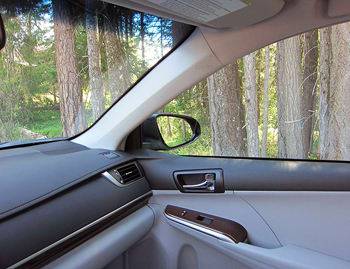 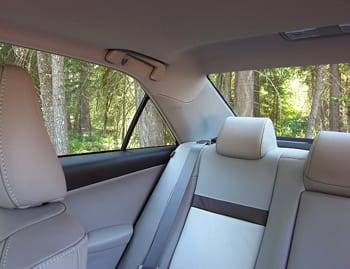 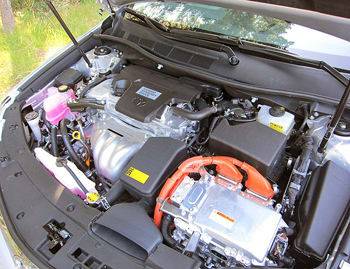 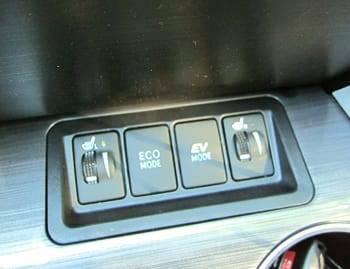 1/24
With dimensions identical to the outgoing Camry, and similar details, the 2012 Camry looks more like a refresh than a redesign. In back, the boomerang taillights add some visual interest. Apart from a few hybrid badges and blue-tinted Toyota logos, the Ca

In the redesigned 2012 Camry lineup, the Camry Hybrid steals the show.

Toyota expects the gas-electric car to get 40 or 41 mpg in the EPA’s combined city/highway cycle, depending on trim level (LE and XLE are offered). That’s for a sedan that drives like it has a V-6, seats four adults comfortably and holds more cargo than its competitors. The Camry Hybrid lacks the whiz-bang driving displays of the Ford Fusion Hybrid and Hyundai Sonata Hybrid, but it beats both in terms of efficiency and drivability, and it’s a leap beyond the outclassed 2011 Camry Hybrid.

The five-seat Camry Hybrid sedan goes on sale in December. The car comes with front-wheel drive and an automatic transmission. To read my review of the non-hybrid Camry, click here. The following review focuses on the hybrid.

Driving
The Camry Hybrid can drive on electric power alone at low speeds, before the drivetrain transitions seamlessly to engine power. When the electric motor and engine work in tandem, the 200-horsepower Camry Hybrid scoots more quickly than its Ford and Hyundai competitors — not exactly slowpokes themselves — despite all three having similar power. Toyota gets my nod for best regenerative brakes, too. Where other hybrid brakes often feel inconsistent or even bricklike, the Camry Hybrid’s pedal is almost as linear as a non-hybrid car’s.

The Camry Hybrid rides softly, but its standard low-rolling-resistance tires — Michelin Primacy MXV4s on my XLE tester — lose their footing easily, and the electric motor’s sharp power from a stop magnifies the problem. Prod the accelerator midway down, and the front wheels spin away, reined in only when the standard electronic stability system intervenes.

The Camry Hybrid LE has Michelin Energy Saver Green-X rubber, which proved even worse in a non-hybrid Camry I drove. The V-6 Camry SE gets 18-inch wheels and stickier Michelins, but they aren’t available on the Camry Hybrid. Those standard tires might help with mileage — Toyota cites a 10 percent overall reduction in rolling resistance with them — but the traction tradeoff concerns me.

Teaming an electric motor with the Camry’s 2.5-liter four-cylinder and running a more efficient Atkinson cycle, the Camry Hybrid LE gets 41 mpg combined, while the heavier Camry Hybrid XLE gets 40 mpg — more than 20 percent better than the outgoing 2.4-liter Camry Hybrid, which was slower and 260 pounds heavier for an average of 33 mpg. In the process, Toyota also overtook the 39-mpg Fusion Hybrid and 37-mpg Sonata Hybrid. Not bad.

Hybrid Elements
For a detailed overview of the styling and interior, see my Camry review. The Camry Hybrid looks less distinct than the previous generation, which had a different bumper and grille than its Camry counterpart. New instruments and a fuel-efficiency display distinguish the interior, but otherwise the cabin mirrors the Camry’s.

Powering the electric motor, the Camry Hybrid’s battery pack sits behind the rear seats, intruding on cargo space and sacrificing the folding backseat for what amounts to a glorified pass-through. (Still, that beats the Fusion Hybrid, whose backseat doesn’t fold at all.) Toyota moved the battery pack forward 5.5 inches versus the last Camry Hybrid, and the resulting trunk measures 13.1 cubic feet. That improves over the last Camry Hybrid (10.6 cubic feet) and beats the Fusion Hybrid (11.8) and Sonata Hybrid (10.7).

Safety, Features & Pricing
As of this writing, the Camry has yet to be crash-tested. There are 10 standard airbags. As is required of all 2012 models, an electronic stability system and antilock brakes are standard. A blind spot warning system is optional on the XLE. Toyota hasn’t priced the car, but given the last Camry Hybrid had more standard features, its successor should undercut its $27,050 price — and close the gap with the 2011 Sonata Hybrid’s $25,795 starting price.

Camry Hybrid in the Market
The gas-only Camry’s improvements are fairly incremental, and some shoppers will overlook it because of that. That’s not the case with the Camry Hybrid. The interior is a few flubs short of family-car excellence, and the skateboard tires mar an otherwise refined driving experience. But in the most important aspects, the Camry Hybrid leaps past its predecessor. Provided Toyota prices it right — and maintains the car’s reputation for good reliability — it should compete for years to come.